We’ve got another few Empires of the Undergrowth critters and some size comparisons from the upcoming fire ant update to show you in this edition of the newsletter. We’ve also done an engine upgrade which has had us banging our heads against our keyboards for the past few weeks!

We’ve got another few Empires of the Undergrowth critters and some size comparisons from the upcoming fire ant update to show you in this edition of the newsletter. We’ve also done an engine upgrade which has had us banging our heads against our keyboards for the past few weeks! Those of you who have been having issues on certain laptops, whilst a small number, will be pleased to know that the next update will fix this problem in a roundabout way. See this thread for more detailed discussion of the issue. 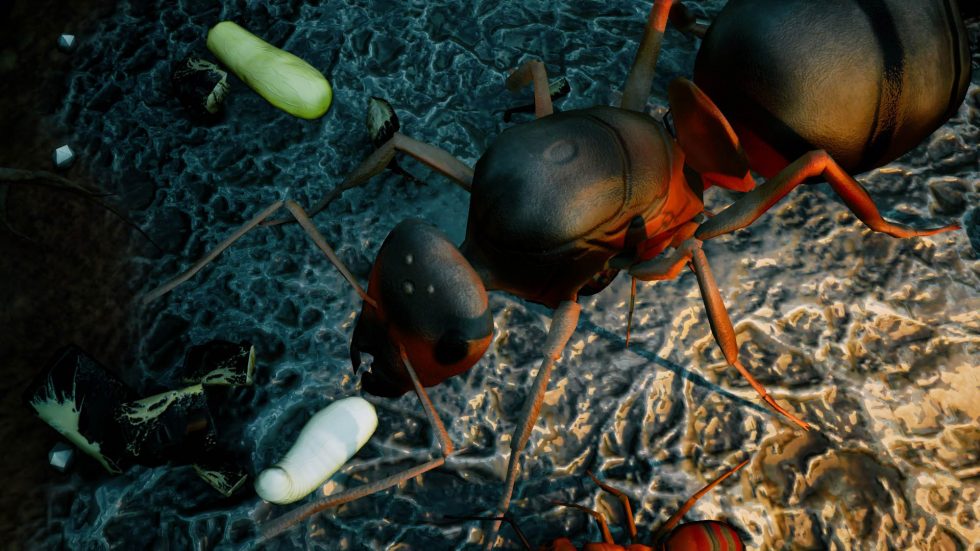 We’ll also be talking about the latest release of Slug Disco’s foray into publishing, Ecosystem! We’re not the developers of this game by Tom Johnson but are publishing it under our banner!

We first spoke about Ecosystem shortly after we brought it on board as the first Slug Disco publishing-only project (we are not developing it), back in September of 2019. Tom Johnson is an accomplished developer and we were impressed with his ingenious ocean evolutionary sim based on real-world science.

We’re very pleased to announce that the game hit early access on March 16th! Please check out the launch trailer below and read on further to find out about this genuinely brilliant simulation game.

Set in an ocean world of your devising, the first task in Ecosystem is to design your marine environment using an array of terrain generation and decoration tools. Your world can look decidedly familiar at one extreme and positively alien at the other. A variety of plants, rocks and decorations can be used to enhance the look of your Ecosystem. Plants and corals have a direct effect on how your creatures will evolve – they form the basis of the food chain on which all evolving animals ultimately depend. You can unlock new plants and corals as you progress.

Ecosystem is a technical marvel and it’s been a joy to see how far the game has come. It’s a remarkably satisfying experience to know your creatures are evolving in a true sense, using neurons that learn how to apply torque at the joints to push against the water, without any preordained animation. The game is available on Steam now – you can purchase it here, and give the demo a spin if you’re not convinced!

Now, back to our regular programming!

Another species that will be tussling with fire ants in Empire of the Undergrowth’s 4th tier is the big-headed ant (Pheidole morrisii).

Like many species, it has minor and major castes, but it also has a category of major often called “supersoldier” in scientific literature. This beast has a huge head and a wicked pair of pincers. The head powers huge bite force much like a leafcutter major, but in a much more awkwardly-proportioned form. 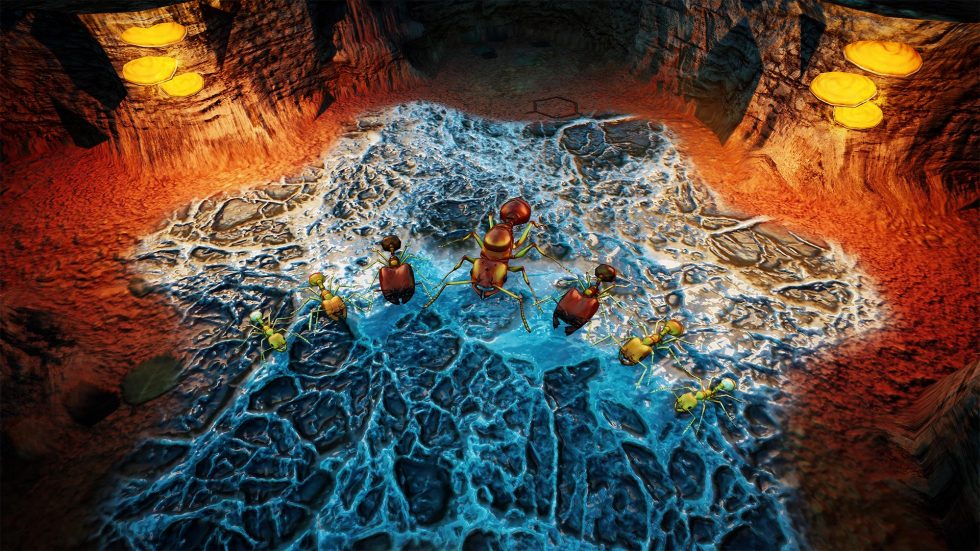 Pheidole morrisii about to drop the hottest album of 2021

The head is very big in comparison to the body (hence the name), so although the bite is formidable the supersoldiers do tend to be a little on the clumsy side! This is likely to translate in-game as the supersoldiers being very tough, but also having the unfortunate tendency to stumble and fall every so often simply due to the disproportionate size of their heads.

The big-headed ant joins the little black ant (Monomorium minimum, see the previous newsletter for more details about them) as another peripheral species that will appear in the fire ant levels opposing them, but they’re not the focus of the update. Unlike the peripheral species of the leafcutter update (trap-jaw and army ants), both of these species are ideal candidates for inclusion in freeplay as their own distinct colonies, as they have suitable nesting and foraging behaviours. As always with unreleased in-development things, this is subject to change.

The cow killer, or red velvet ant (Dasymutilla occidentalis) is not an ant at all but is a kind of wingless wasp. In nature, the males fly to find mates but the females spend most of their lives looking remarkably ant-like as they busy themselves foraging. Seeing her resemblance to a queen ant but with distinct furry red patches, it’s quite easy to see how ants and wasps are closely-related in the insect kingdom – both being members of the order Hymenoptera. 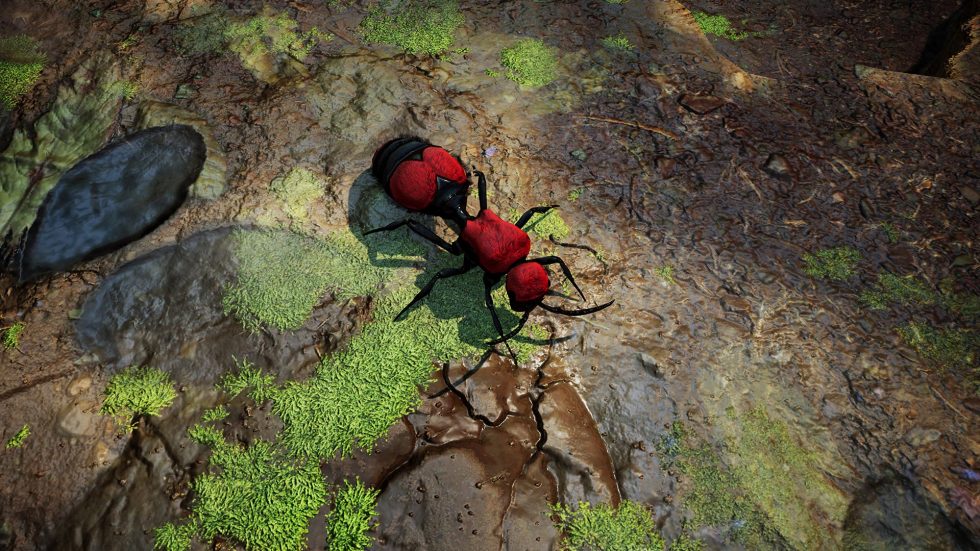 She doesn’t actually kill cows, but her sting would certainly put one out of action for a while

Red velvet ants are usually non-confrontational and will avoid conflict if they can, but if threatened the sting is so potent that the species gets its common nickname of ‘cow killer’. Her exoskeleton is remarkably tough for an insect – it has been reported that entomologists have difficulty using metal pins to pierce it for display mounting!

Her stats and abilities are related to the tough exoskeleton, reluctance to fight and exceptionally painful sting. She’s likely to be very tough for her size, and to only start using the stinger at low health, perhaps also sometimes fleeing with a speed boost. Overall the cow killer is a tough and deadly addition to the swamplands of North Carolina.

The wasp mantidfly (Climaciella brunnea) is neither a wasp nor a mantid – the wasp-like pigmentation is mimicry to fool predators, and the mantis-like arms are an excellent example of convergent evolution, where similar solutions to a problem evolve in unrelated species. 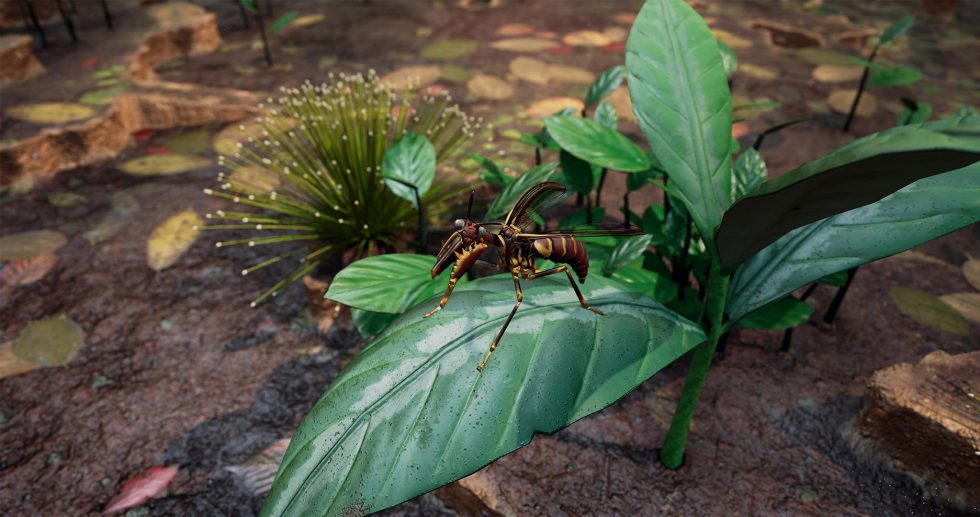 Voracious hunters of insects, they are more than willing to tussle with fire ants for a quick snack. They grab their prey very much like a praying mantis does – using those uncanny front arms. They then fly off to devour it in peace. Expect to see them lurking among the flora of North Carolina waiting for your colony to stray too close!

Titans – huge creatures with unique behaviours that differentiate them from the regular denizens of the undergrowth – will be coming to the game along with the fire ant update. 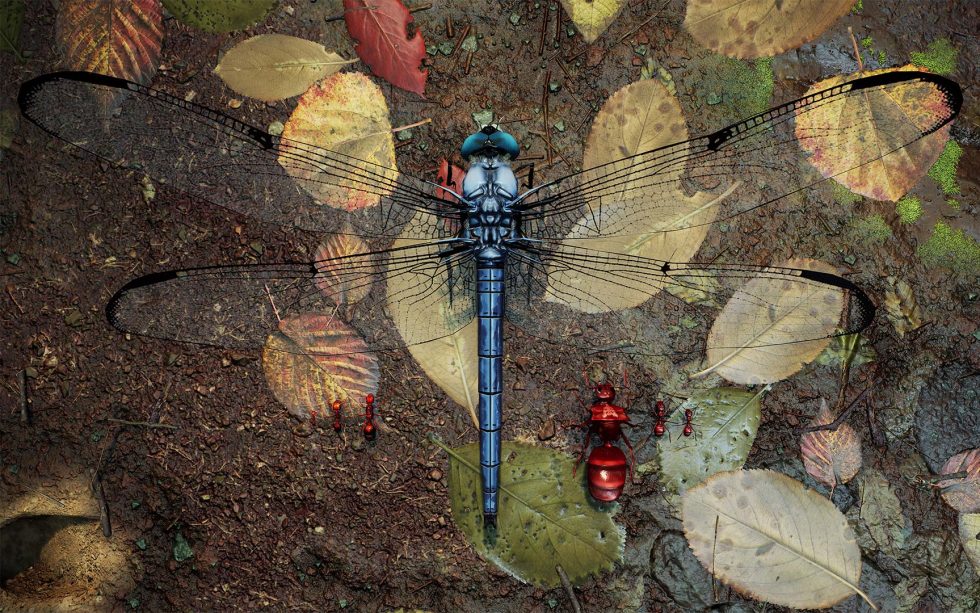 We detailed the first confirmed titan, the great blue skimmer (Libellula vibrans) in the previous newsletter. Check out its animations to see it in action! What is difficult to see from these stills and video is just how big this dragonfly is. In the above picture, we’ve put it next to a very familiar ant type – the Formica ereptor ant – as well as the upcoming fire ants, who the skimmer will battle. You can see just how much of an absolute unit she is.

Always my favourite part of writing these newsletters – this time round taken exclusively from our Discord‘s screenshots channel. If you haven’t already, come along and join our nature-loving community! Friendly ant enthusiasts guaranteed. 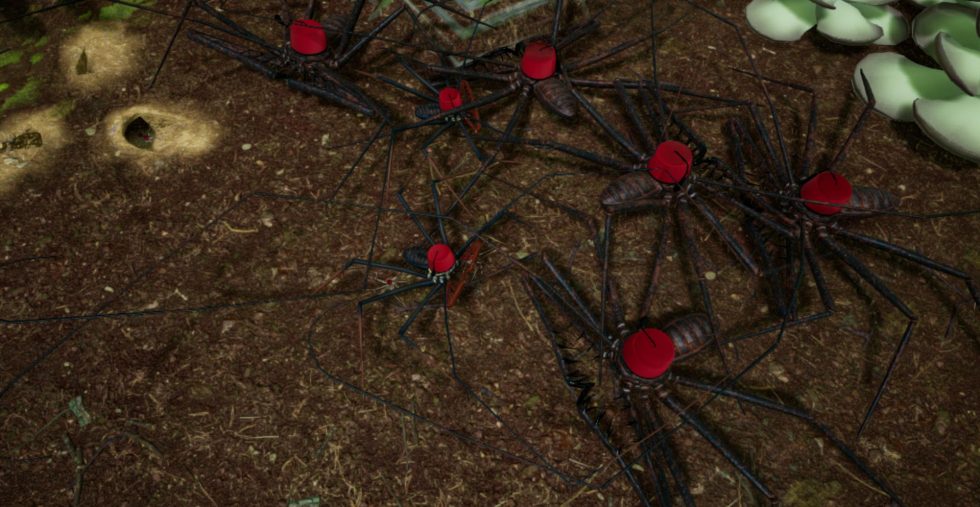 Fezes are definitely cool in this shot from PeepsPlays_YT 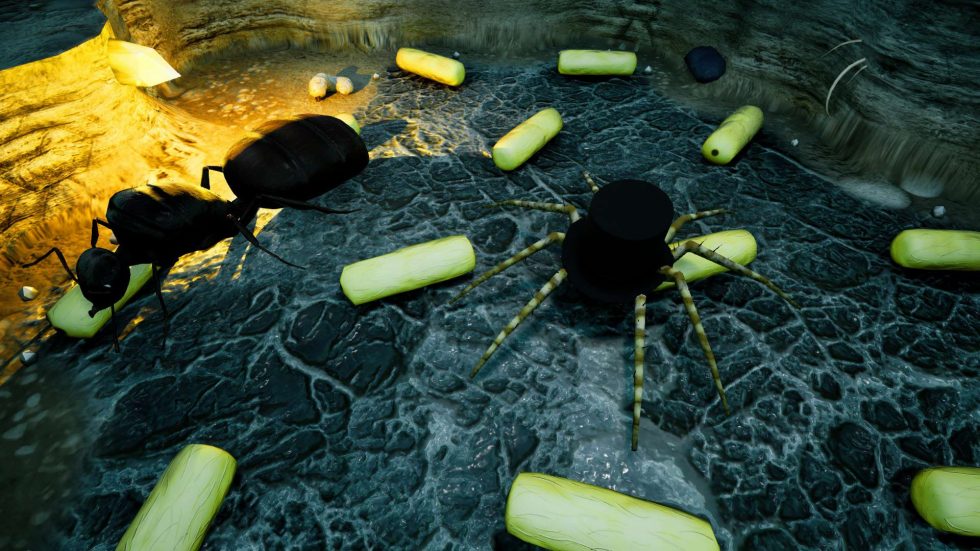 The Hungry Spider never forgets his top hat. As long as you have arachnophobe mode on. From syrian dugong 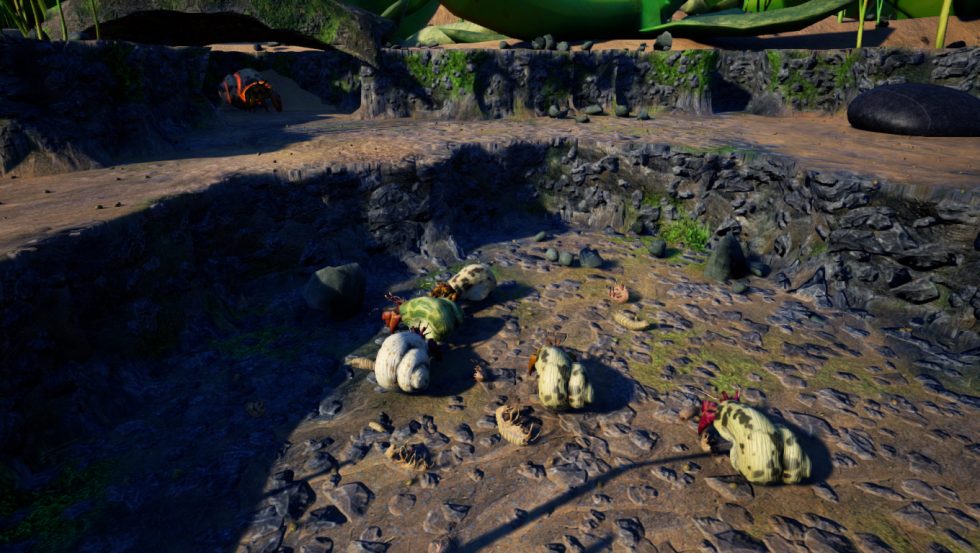 The hermit crabs await the arrival of their uber-powered lord from Dr. Spooks