Fourth part of the devlog. We continue explaining how we designed the basic enemies in Super Hyperactive Ninja. Genkidama Monks! Creepy Ghosts! Cute doges! Read about what they do in this article.

In the previous post we talked about the basic enemies: mokujin and evil ninjas.

Those enemies served as an introduction to the main mechanic the player has to hurt enemies: running at them from behind.

Now it's the turn to talk about enemies that don't follow that mechanic to the letter.

Ninjas and Mokujin block the path unless you kill them fron behind. Bumping into them while not in Hyperactive Mode makes the player flinch and thus cannot advance.

We needed an enemy that can hurt the player but doesn't suppose a blocking entity.

As you can see, we are following the "form follows function" principle when designing enemies. This means that first we think about what the enemy has to do in order to fulfill a gamplay need, then we start designing what it could be.

If you ever get into Game Design we recommend you to use this approach instead of coming up with "cool" enemies and characters and then trying to put them where they could fit in. With the "form follows function" principle you'll only design what you might need, and thus, optimizing your time.

This makes the monk the weakiest enemy in the game, but that doesn't mean he has no way to defend himself. Monks can shoot big energy balls that can be difficult to avoid in narrow spaces.

As with the evil ninja, monks come in different versions (taking advantage of palette swaps, bless them!). 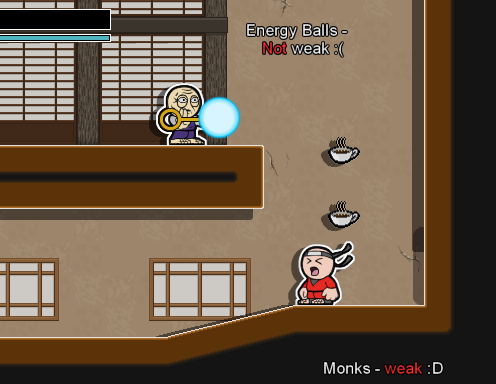 Monks can be easily dispatched, but not their energy balls

Normal monks, colored in purple, are basically static turrets. They stand on a place, without even turning, shooting fireballs at regular intervals. Players must learn how to use the time lapses between balls to approach the monk and get rid of him.

Orange monks are still static (in fact, all monks are) but they turn around and shoot when they spot the player. 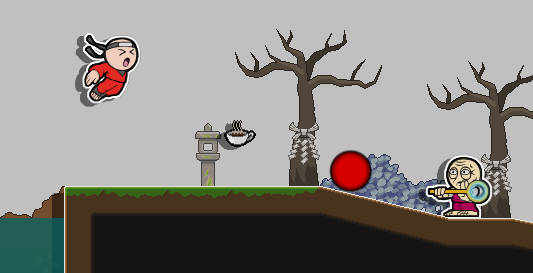 Garnet monks act just like orange ones, but their red-colored energy balls can chase the player!

Who you gonna call?

Just as we needed some enemies that the player can easily kill, we need the contrary. We think it's always good to have enemies that must be avoided instead of confronted. It makes the player not be cocky and hasty.

The easy way is to make some enemy that cannot be killed in any way, only stunned or slowed down.

If the main perk of this enemy is that it can't be killed, what better than a Ghost? That's what we did! Also, Japanese Ghost are creepy as hell, and we couldn't let go that chance.

These Ghosts have a very simple patrol. This patrol can be both horizontal and vertical, so they can attack you in mid-air.

There are blue, pink, orange and red ghosts (get it? :P). Each one has a different patrol pattern, which is very easy to determine just by observing for a while. 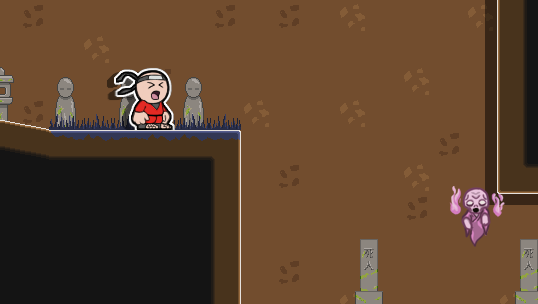 Ghost serve as an unkillable enemy that patrols constantly. Players must wait for an opening to advance

Finally, we needed an enemy that attacked rapidly the player, faster than a ninja, but that couldn't change direction. Kinda like those Megaman enemies that attack you when you get in the same X or Y coordinate.

We thought an animal would be a better fit for this one. Animals like dogs have been used for a long time to guard houses or herds, so a ninja dog would be perfect.

Dogs cannot be killed with Hyperactive Mode (you just pass through them), but the player can get rid of them by other means. 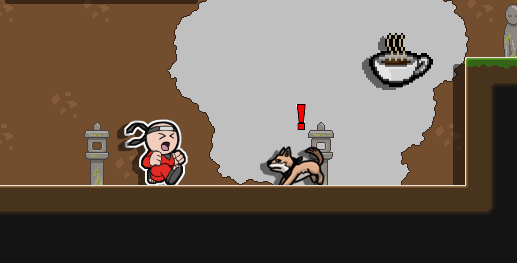 Dogs will run to Kohimaru if they spot him. They are faster than ninjas but continue straight until they hit a wall or find an obstacle

These were all enemies present in the original Hyperactive Ninja, updated for the new mechanics and with new variations. Not going to spoil everything, but there is obviously more to see! Keep tuned!

What do you think about these enemies? Have any suggestion? Write in the comments below!