It's hard to believe that it's been over a year since the last update to Decoda.

Those of you that are diligent in checking for updates on our website may have noticed that we just released an update to our Lua debugger Decoda. It's hard to believe that it's been over a year since the last update -- time certainly goes by fast when you have your head down working on Natural Selection 2! 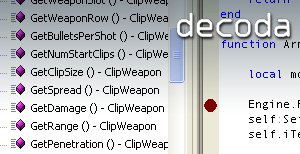 The reason that we're mentioning this in our Friday update is that one of the more significant changes in this patch is a fix for debugging LuaJIT-based applications. LuaJIT is a rewrite of Lua that's designed to use just-in-time compilation to gain additional performance. Right before we released the Engine Test we switched Natural Selection 2 over from vanilla Lua to LuaJIT to make sure script code is executing as fast as possible.

So, if you are a proud owner of Natural Selection 2 and Decoda, not only are you an amazing person but you will also now be able to debug Lua mod code more effectively. If you don't own Decoda but are interested in working on mods, don't worry! We're happy to announce that we will be including a special version of Decoda with Natural Selection 2. This version of Decoda will be shipping along with all of the other tools in a Steam update next week.

sweet :D allways wanted to give decoda a go :3 and now it looks like i can :D

Decoda is also recommended in Mike McShaffy's Game Coding Complete 3rd Ed
:)
Gave me a smile when I saw it in there.

does it support other games to? looks interesting to use for garrys mod :3

Haha, I just realised that when you said it :D