The first in a series of updates that will give sneak peaks into each era of ETM.

After seeing several great Legacy Era mods wither out and die, I have taken on the challenge of creating a completely un-touched era in the modding community.

In game, the Legacy Era begins in Era Level 4 (tech level 4) and allows you to interact with heroes and villains ranging from the Legacy of the Force Series of books to the Legacy Comics.

Now I know that the Empire was not in conflict with the Galactic Alliance during LotF, but I have decided that for the sake of gameplay, the Empire will have ignored the Pelleaon/Gavrisom treaty. The Consortium was one of the more challenging parts of creating this era, as I didnt want to remove it or replace it with the overused Hutts and Black Sun.

If you recall, the end of the FOC campaign ends with Silri uncovering an army of Sith troopers, along with a frozen Sith Lord. I took advantage of this cliff hanger and decided to incorporate it into the story. Keep this in mind if you see anything that seems out of place in the next updates ;]

Well lets get started, the finished Sith Imperial War hero list is ready to be revealed:

Now that thats out of the way, we can get to the more unique stuff. The main reason there arent the number of Legacy Era mods as there are Clone Wars mods out there is the lack of ground units. Warb_Null was generous enough to listen to the community and release Legacy Era ship designs.

In ETM however, space wont be the only place where you can play during the Legacy. I have modelled/edited several units to fit in with the technology of the 130 ABY's.

The first example is the AT-AHT: 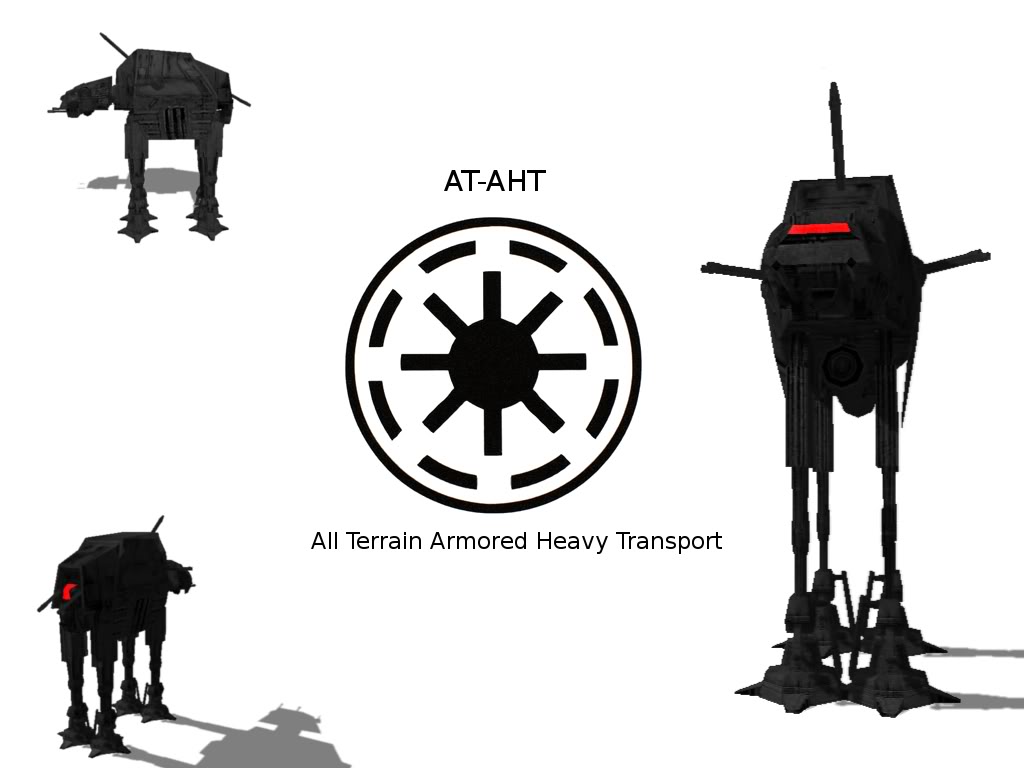 This moving fortress is armed with powerful AA weaponry to supplement its heavy lasers. Its shielding and armor is sufficient to withstand any enemy barrage, and the troop bays carry dozens of Imperial Stormtroopers.

I know I'll get some flack for this, but here is the model for the Imperial Stormtrooper (Legacy Era), otherwise known as the Fel Trooper: 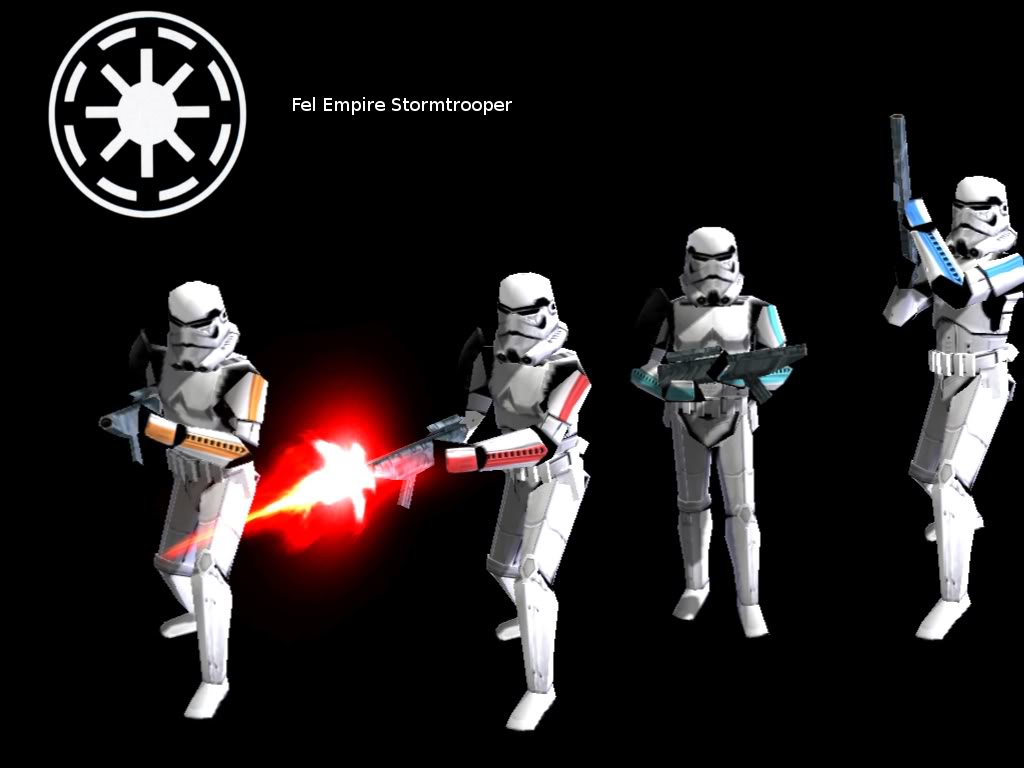 As a direct contrast to their earlier counterparts, Stormtroopers are trained and equipped for maximum accuracy. The ARC-9965 blaster they carry is capable of switching from full auto to long range sniper mode.

Next up, the Galactic Alliance Infantryman: 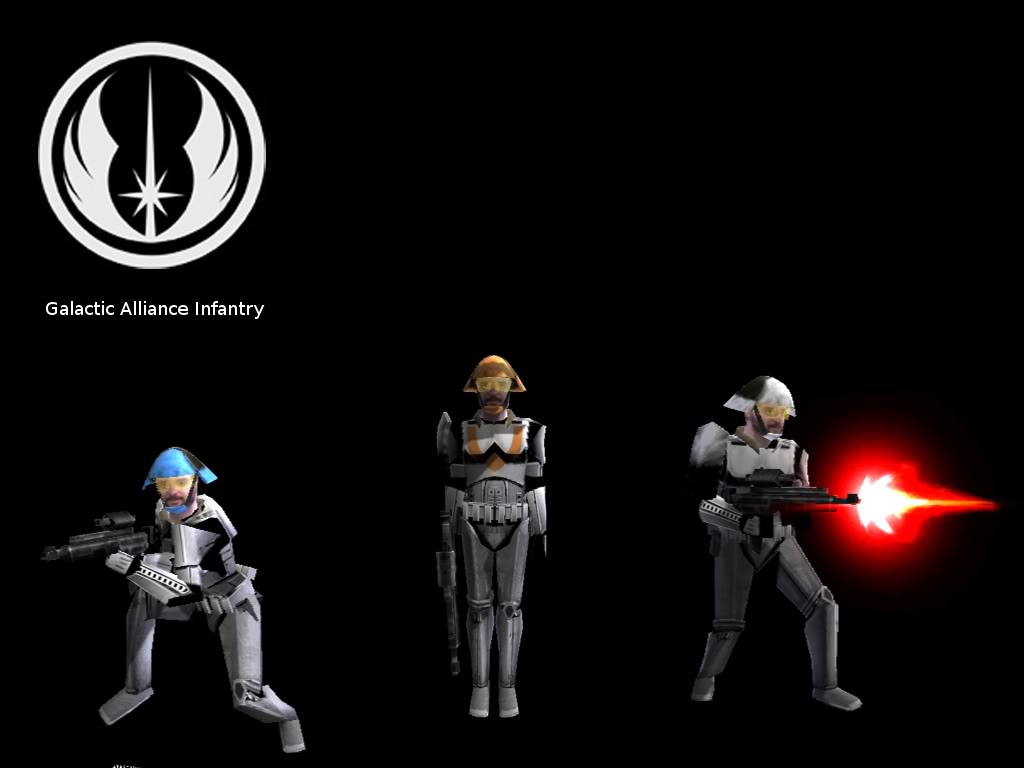 The contemporary of the Fel Stormtrooper, the basic Galactic Alliance Infantryman is equipped for maximum damage cover fire, capable of charging up their heavy blasters to unleash a devastating burst of blaster bolts. Their armor is a direct result of Imperial-Alliance collaboration during peaceful times, but is now found in the frontlines protecting infantry against the troops it was first fielded for.

Last but not least in the land preview, i give you Darth Talon: 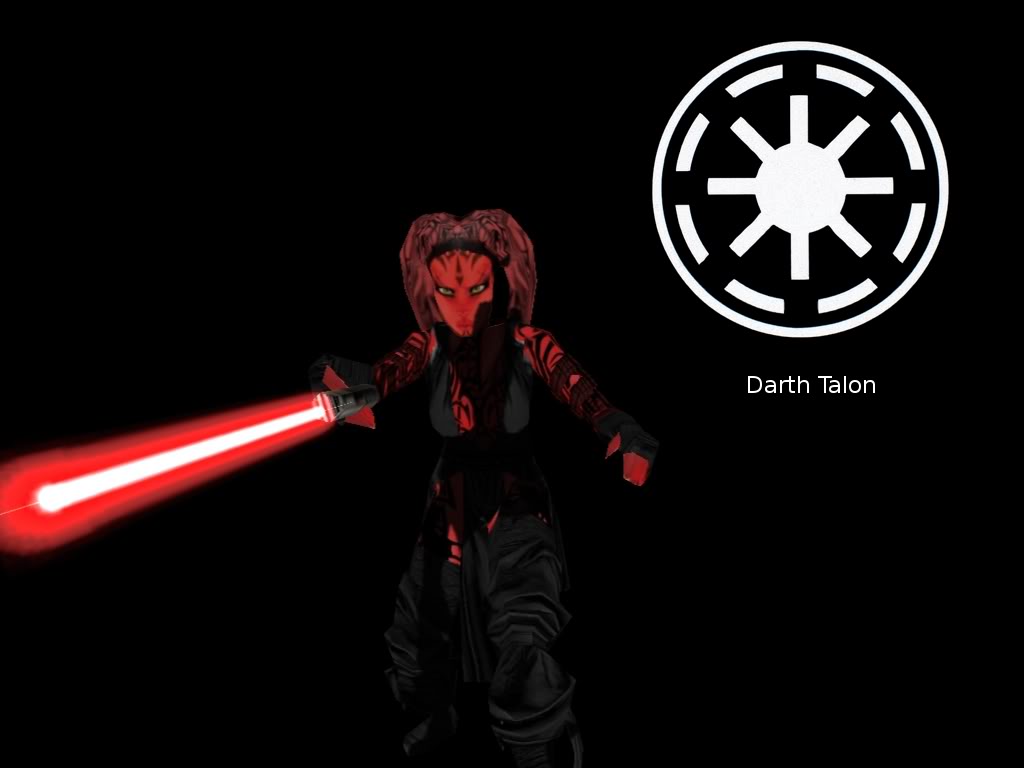 Trained by Darth Krayt himself, Talon is a deadly warrior. Capable of long range force attacks, or powerful Force Lightning bursts from her fingertips.

The space portion of the Legacy Era I have been working on for a few months, so I am glad to announce it as ready to be shown to the general public:

The first unit you might recognize from the LotF books: 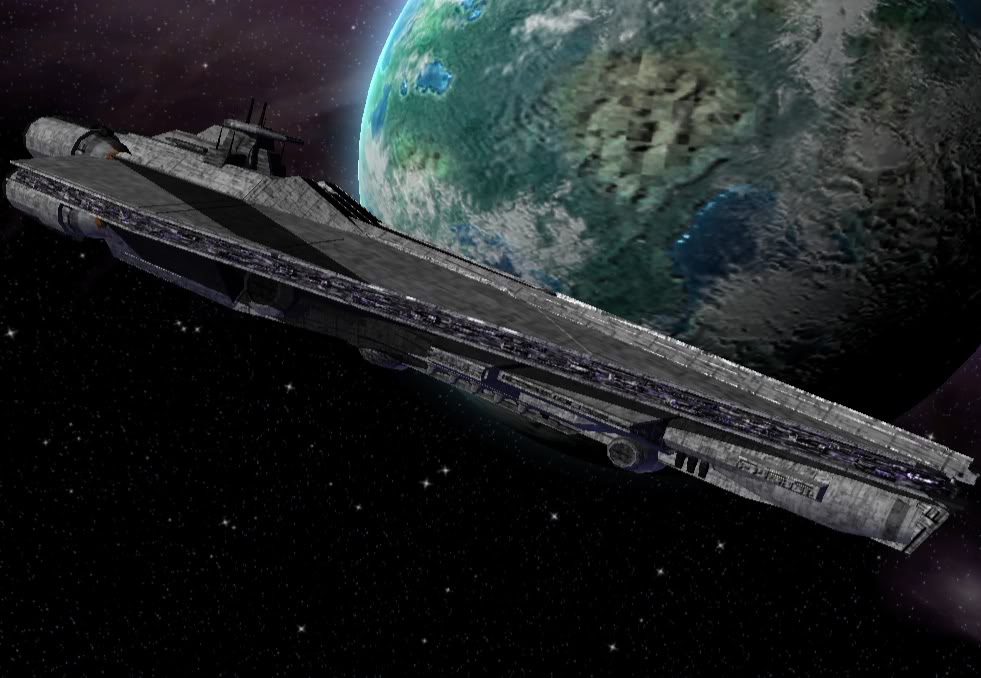 Designed by CEC as a supplement to the Viscount Star Defender, the Strident saw action during the Yuuzhan Vong war and most conflicts after that. Heavily armed, and equipped with high technology, the Strident was the pinnacle of capital ship design by 40 ABY.

Next, is the Turbulent-Class Star Destroyer: 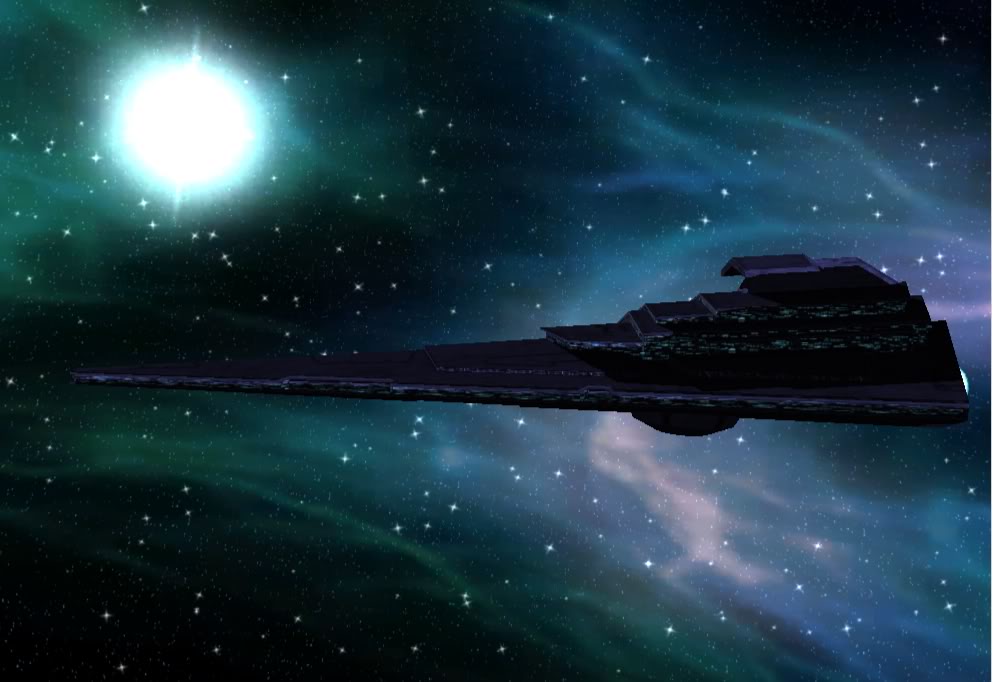 Nicknamed the "Pocket Star Destroyer" the size of this warship is the last thing one should take into consideration when in combat against it. Armed with heavy turbolasers and proton torpedo launchers, the Turbulent was more than a match for the Nebula Class that the Galactic Alliance was so fond of by 40 ABY.

Moving on to the true Legacy Era:

The Indomitable and another Scythe-Class Main Battle Cruiser in formation: 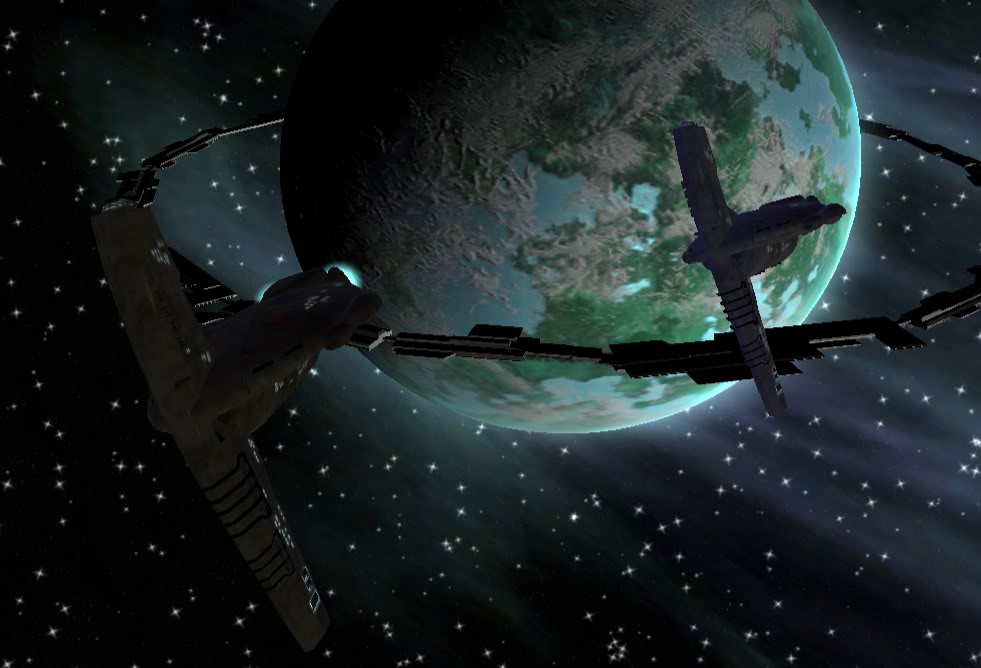 The main capital class ship in the GA Navy by 130 ABY, the Scythe-Class is designed for overwhelming firepower in its "Cross of Fire" and can devastate even the now outdated Executor-Class SSD.

The Scythe's counterpart, the Pelleaon-Class Star Destroyer, in formation with an Ardent Fast Frigate: 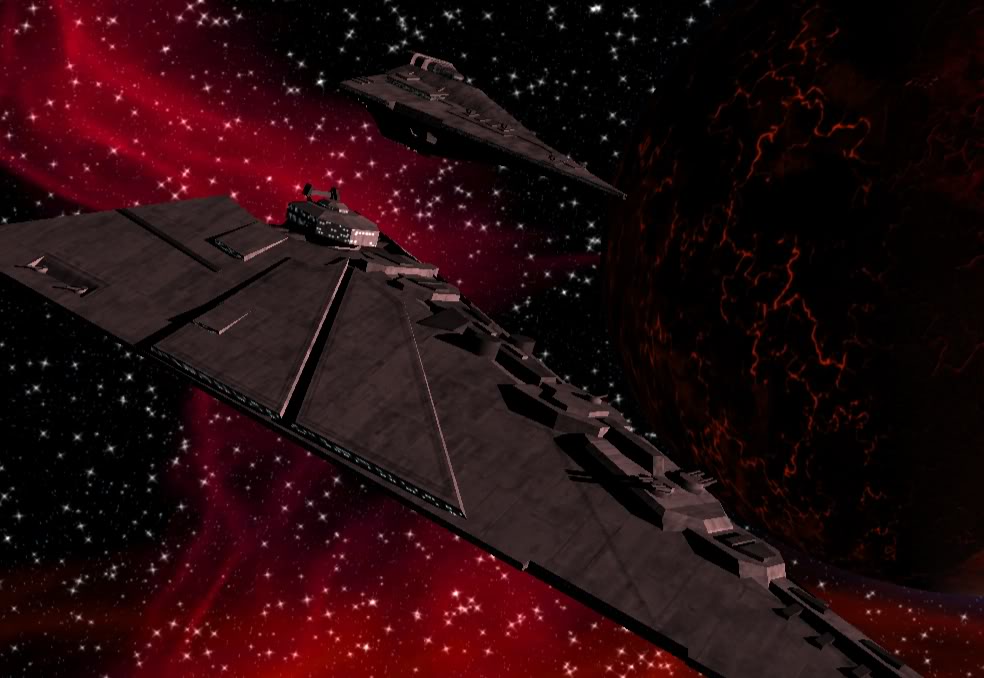 Equipped with heavy turbolasers, heavy shielding, and un-matched speeds for a capital ship, the Pelleaon Class is the ultimate foe in space combat. The Pelleaon is also equipped with a gravity well generator and long range tractor beams, effectively replacing the ancient Immobilizer-418 Interdictor.

Consortium didnt get much love in this update did it? Well i got some for you: 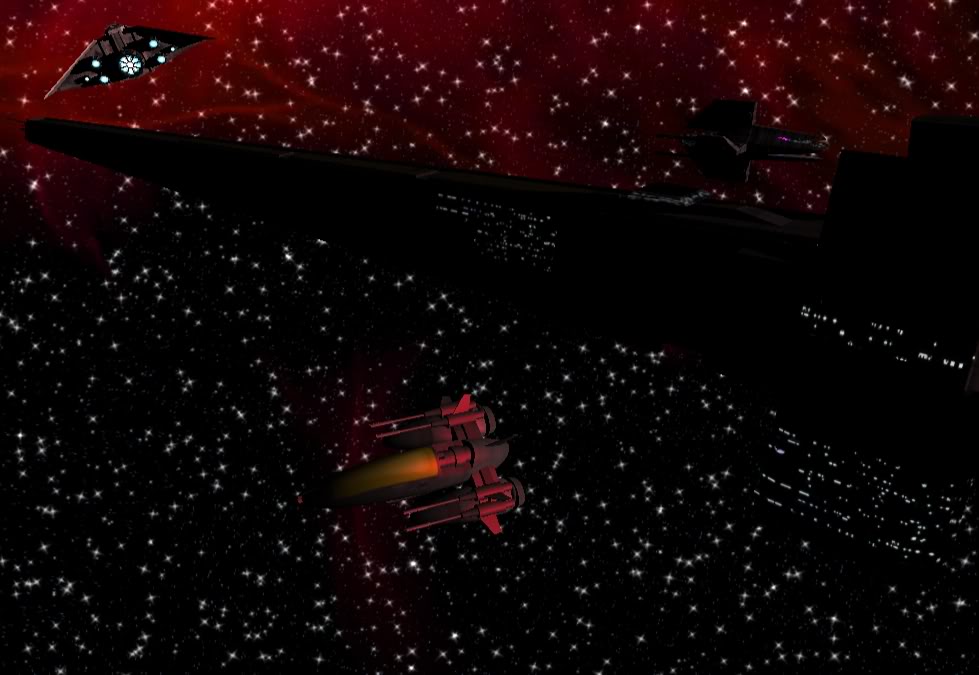 The Teroch battleship is very similar to the Arc Hammer in design and shape, but is mostly Mandalorian in technology. One of the few capital warhips to have ever been fielded in large numbers with cloaking technology in use, the Teroch is perfect for sneaking up on unsuspecting Imperial and Alliance ships.

Also in view is the Dactillion Assault Fighter, one of the fastest military starships in the Galaxy, the Dactillion is perfect for the Interceptor role. Armed with quad disruptor cannons, the Dactillion wipes out entire squadrons of Predator Class fighters before the laserfire erupts.

The Consortium also got one of the most important tactical warships in the game IMO, the Vengeance MK. II: 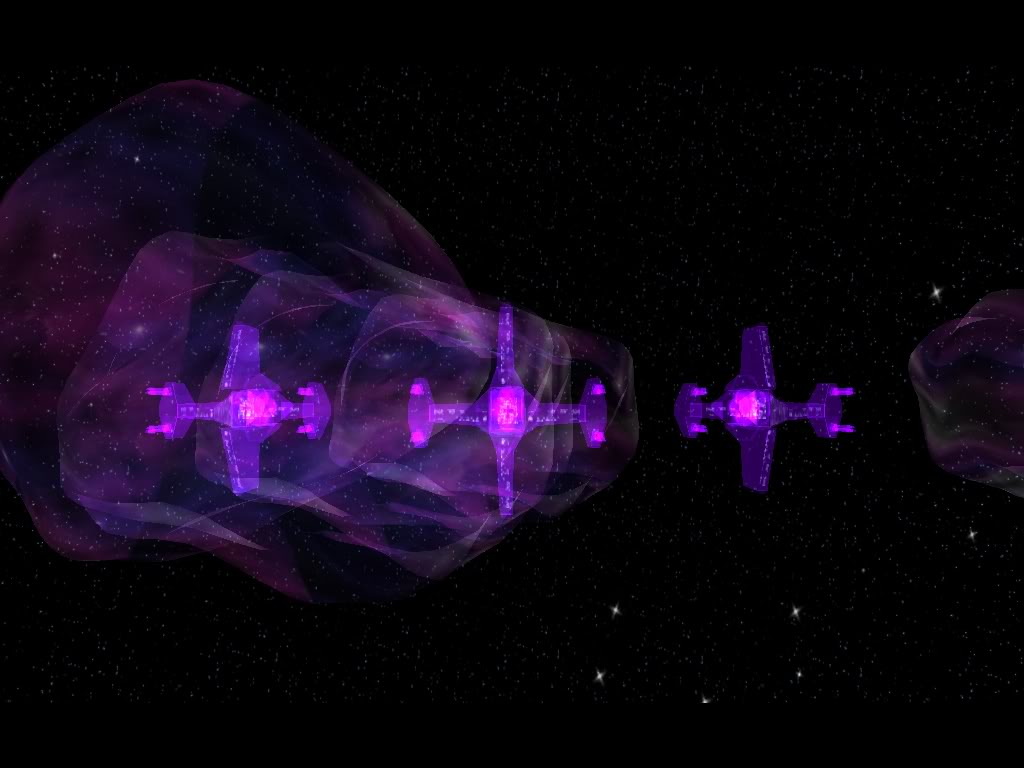 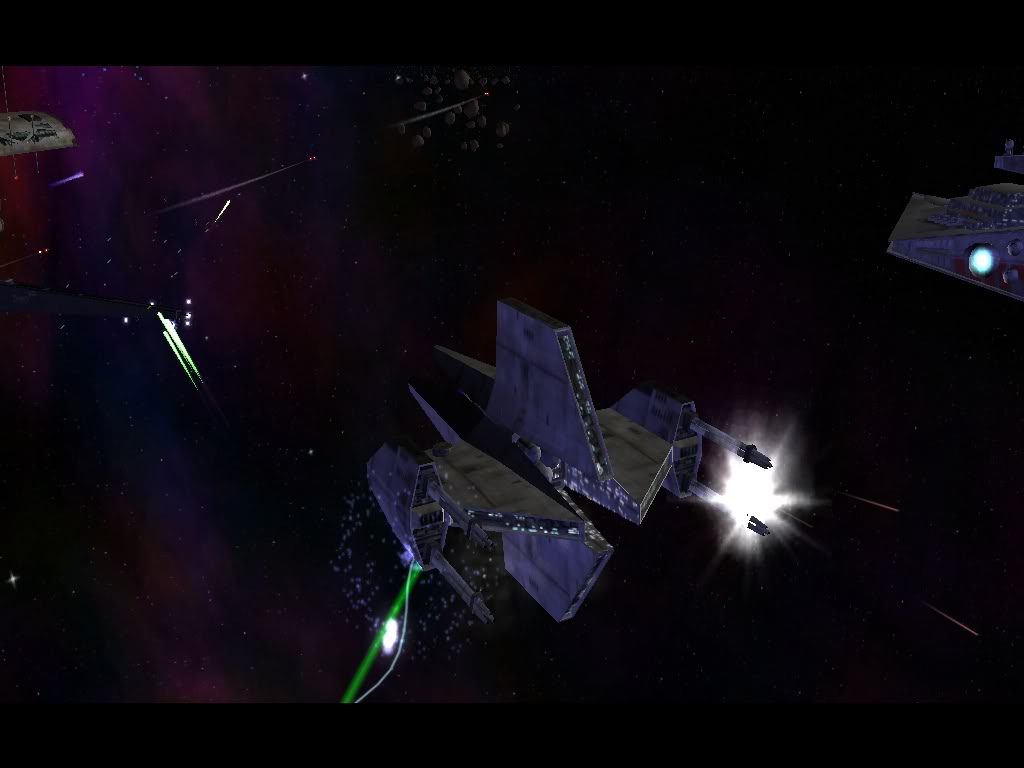 And there it is guys, I hope you all enjoyed it.

Wow, this is amazing.

Everything looks amazing, but the Strident... Just wow... Fabulous. :)

Thats the design I based it on. Of course i took some design liberties, but the model still needs some tweaking in order to be finished.

thats the vanilla planet model, i didnt change anything (besides the skin i think)