Another (the last) preview of what to expect in the next version of A Clash of Kings. 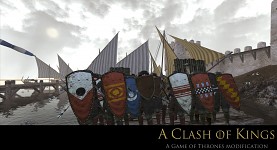 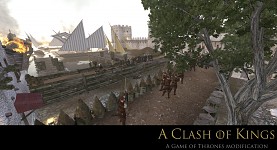 I've previously talked about how you, the player, would be able to hire sellsword companies, and the system as described in the last preview remains unchanged, except for one small part:

The player will not be able to recruit the sellsword companies if their party is full.

The original plan was for the player to be able to recruit them as an "extra" force, to allow for a bit of a boost when starting their own kingdom, or if they where being overwhelmed by enemy forces. However, that proved problematic for a number of reasons, both balance and code wise.

Anyhow, to compensate for this, I've added a new feature - when you recruit a sellsword company, the leaders, captains, serjeants and paymasters are included, but not as regular troops, but rather as companions.

So if you recruit the Windblown, you get a lot of troops, and a couple of new companions such as The Tattered Prince, Caggo, Denzo D'han and so on. Adding this feature also meant I had to do a companion overhaul - they're now stationay which will allow me to, in future versions, add some more interesting characters as companions (Sandor Clegane would be an example). 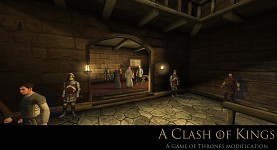 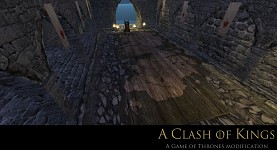 I've got a minor hurdle to overcome in regards to the new companion recruitment system, but that's about it, so the above information should be how it will function in the next version.

That's it for now, 1.4 is almost done, but I really don't know when I'll be able to release it.

Amazing! Most immersive experience so far!

Very exciting! Something to look forward to.

I cant wait for those new Unsullied!! Keep up the great work!

Hey Cozur. Great mod! I love it! By far the best mod out there, imo. I was wondering about the dragonstone soldiers? Before they used to wear armours looking much like the ones in the tv-series. But now they don't anymore. Is this something you will be able to bring back?

Pictures of that coming soon - like in a day or two.

You are teasing us Cozur... Keep up the great work, can't wait for the next update!

Sounds like a great plan! I can dig it

Will the companies be replenishable at all though? Like the quartermaster can recruit new soldiers for them?

Cant wait to spend another set of years in Westeros!

Love this mod so much!

"they're now stationay" The companions bit.

What does it mean they are stationary?

looks very nice so far :) Hope you can release soon!

Anyone? what does stationary companions mean???

im guessing that they don't travel from tavern to tavern? maybe some companions remain stationary in one tavern or town etc until you recruit them..

Ok. could also be like that indeed.... haven`t thought about that option, but it sounds logical tnx!

tnx, Cozur you have definitive awnser for me ;)

"Not save game compatible"

i seem to have a video memory leak, this only happens when i use this module. it's not that my pc can handle it, i just don't know how to fix it.
anyone else with the same problem or any ideas how to fix it?

One question, will the cheat menu be back? I don't generaly use cheats while playing, but it bugs me a bit that I conquer half of Westeros, then a new update comes up and I have to do it all over again. It's a great game, sure, but seriously it a shitload of unnecessary work. If it were savegame compatible at least.
So, cheat menu, yay or nay?

Will it be compatible with current saves?

Can we have the option to re-dye our map back? This has been requested many times already and never answered...

I love this mod and has been waiting for this update for some time now. do you know when it will be released? cant wait....

give me my fix Cozur!!!!!! im going through withdrawl from lack of being able to play new stuff!!!! :D

hmmm, i try to find crack for 1.60 but didn't find it.
try to buy on steam but paypal doesn't support currency of my country.
anyone, can you share the 1.60 crack? or this mod still compatible with 1.58?

There are other ways to buy the game. This site does not support piracy and as such you're **** out of luck.

Has troop maintenance been brought back down yet?

Is it possible to make it so that we can join a sellsword company (as a soldier) ?