Hey, it's been a long time since last beta, the fact is development ceased after 2.6. I'd say there were two main reasons: community seemed to decrease each new beta and mod progress was held back by some serious technical issues. However I always felt like this project still wasn't finished, it just reached a ceiling we couldn't break by that time.

If there was going to be any new version such technical problems should be approached or we'd keep running in circles. My work on Dual Reality made me a much better coder, and that experience has been critical to commit this new beta. There were some engine glitches like player movement or hit registry since the very beginning. A much needed upgrade to latest SDK has fixed many problems, lag related issues are handled much better up to the point a ping over 200 doesn't feel any more laggy (movement wise) than a local game. Some major fixes and improvements have been applied to our mod code too, so weapon prediction glitches and several exploits are now a thing from the past.

On top of that, we never released a Linux server build. Beta 3.0 will be played on Linux servers too thanks to the immense work made by Psychonic. He also added fixes, security improvements, plug-in compatibility and will grant us full SourceMod support. You may know him for projects like SourceMod or HLStatsX, his help may push this mod up to levels we couldn't imagine before.

More highlights: player movement has been redone completely. No sprint, no stamina, no movement restrictions. This was an efficiency problem, could we reach same goals than old movement system using a simpler and less frustrating approach? New system features no other limitation than a progressive speed penalty when player jumps/strafes, same speed over all directions. Feels way smoother, quicker gameplay overall and is friendlier for newcomers. Melee weapons get a default speed similar to old sprint.

This isn't a feature-centered release as you can see. Focus has been those things which weren't working as we wanted. There are however a few important additions which will be commented in a future news post. For the moment I'd like to feature a new map: fof_robertlee. This level , based on one of the most famous steamboats from the Old West era, presents a good chance for close quarters combat and gameplay wise it's a nice departure. Thanks to Morricone for developing this amazing idea. 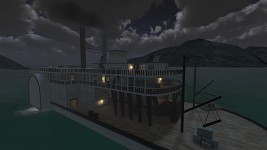 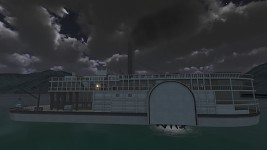 My thoughts about 3.0 are clear, this is a huge leap. Fun weapons and maps, quality music/sounds and original gameplay were there, now comes technical polish, server support and game balance to max out the experience. Next day I'll talk about our incoming final testing stage, you still can help us and we'll reward you in a very special way!

Are there going to be any additions to the bots?

They handle reload better in deathmatch :), no well, they are just a complement not much work done.

It's back? Nice, always loved Fistful of Frags and was disappointed when I'd heard development had ceased. Hopefully the playerbase'll pick up again.

This is great... Since the latest version I stopped playing because I couldnt find how to disable the fuc***g bots and the game was too laggy. I'm also really looking foward for the new movement system.

This is an awesome game. All it needs is SP. And I don't mean MP modes played SP, I mean an actual SP campaign. That would be awesome. It would make this mod very popular too. It'd be nice to infuse a little more interest the the western genre in gaming.

good to see the mod alive

O the Devs are still alive, who of thought it? :)

This news just made my day. You guys really need to get a Steam installation application, then this mod would always be played.

Good to hear your back, Maybe this time you wont shut down the forums when the community starts to get good ;)

I'm glad this is still being worked on.

Waited for that post RYell, as one that tests 3.0 I can tell you guys that it's an absolute blast!

Reminds me of the Hitman Blood Money level.

Finally it is made public! Good job RYell.

Funny thing : I had on my mind yesterday precisely "The only big thing that will be missing now (except many 3rd party mappers) is the long-awaited linux dedicated server build :D ..Amazing

ohhhhh yes! i enjoyed fof so much in the past and now it returns! good times incoming :D

after i'm back from my journey i will download and play that game to the fullest..... love that fistful game ;-) yeeeeehaaaaw

I..did not see any people playing the last year.

I hardly got to play the mod before, just a few matches. Will be fun to see it back :)