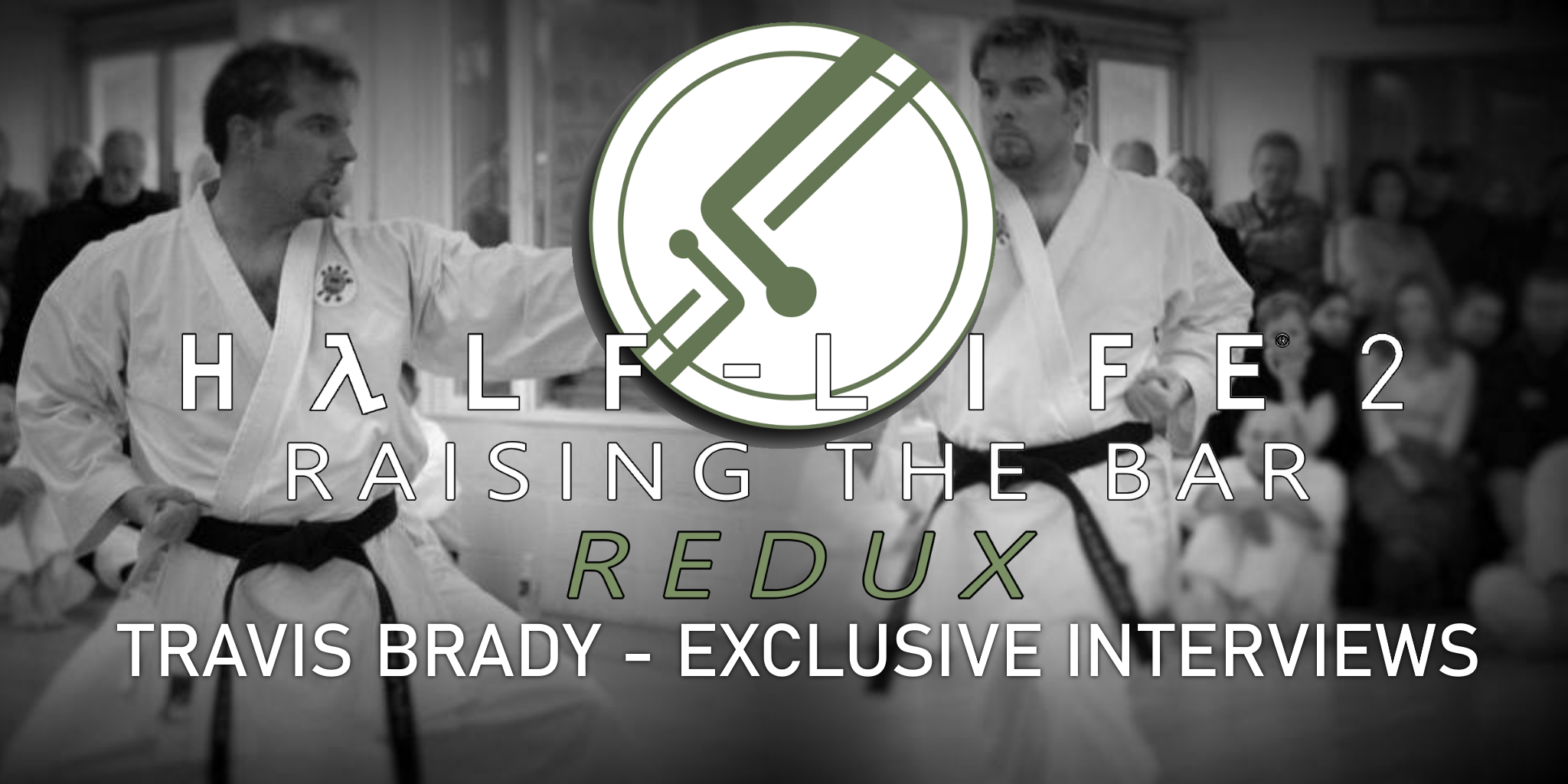 Hey everyone! We've got a very different - and very special - article in store for you today: A collection of interviews we conducted with Travis Brady between August of last year, and now! Travis is an ex-Valve developer who, amongst other things, worked on T-Bot/DOG, the city scanners, antlions, and more. We got answers on many topics - the largest of all being the elusive T-Bot! What we learned was incredible, and whilst we'd previously been sitting on this information, we decided now was a good time to release it to everyone else. With that being said -

We just want to please ask before you read ahead that the community don't suddenly barrage Travis with DMs about his time at Valve. He's a busy man and we're very grateful to him for sparing time over the last year or so to speak with us regarding his work. We're currently in conversation with a few other ex-Valve developers, but if Travis gets a hard time from this, we'll have no choice but to leave those conversations to avoid them also getting buried in emails. Please be respectful of the time he's given us and if you do choose to approach him, show respect and be patient in turn.

Now - on with the interviews! 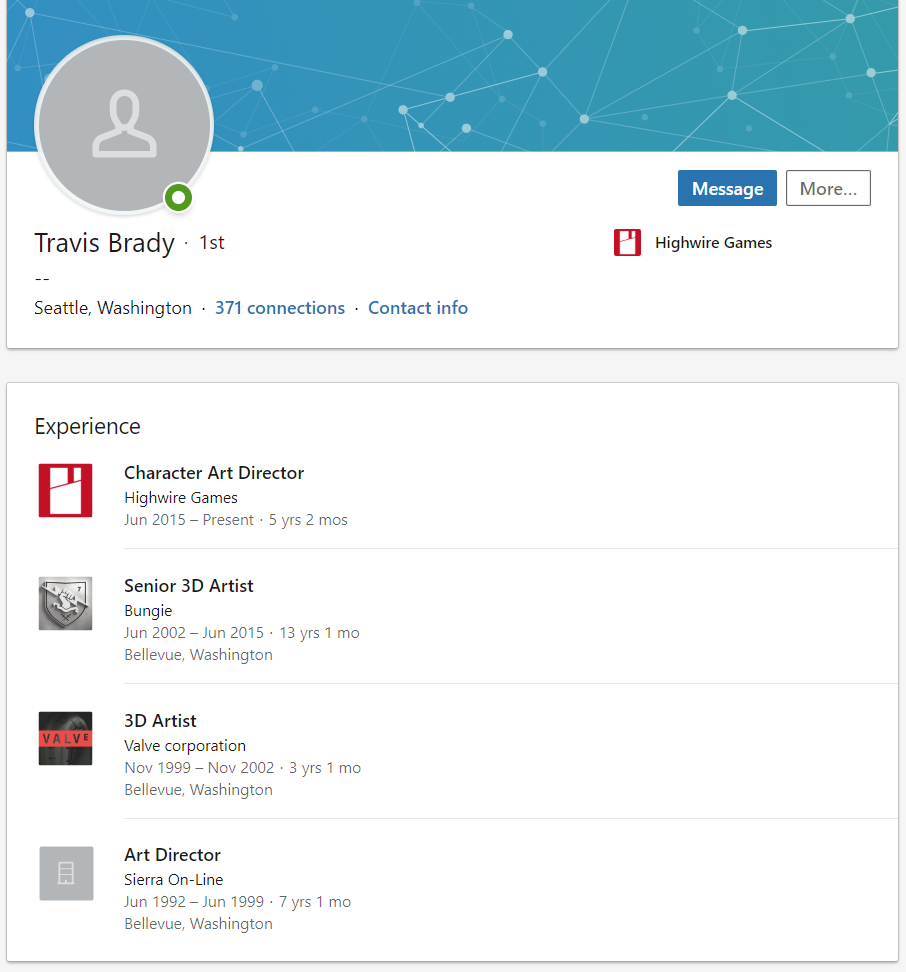 Travis' public LinkedIn profile - proof of his identity. The "1st" indicates that he is a direct connection
with the member of our team whose LinkedIn was used to conduct interviews with him there.

Context: The first round of questions we sent to Travis, over ArtStation (later interviews were conducted via LinkedIn.) This was after some greetings, introductions about what we do, and so on.

RTBR: It's been theorised that T-Bot 1 stands for "Travis Robot 1". Is this true?

Travis: That is true. [smile] Curious how you even heard the dev name I made of TBot that I thought was internal only and never made it outside the building.

RTBR: A good few years ago, someone else in the community asked someone else at Valve about T-Bot, and was told it was just "old experimental content". Was T-Bot an experimental prototype of D.O.G., or at that time, was it for a character not at all related to D.O.G.?

Travis: TBot was somewhat an early version of D.O.G.. But the Half Life 2 story changed. So I completely redesigned the junk yard robot.

Context: Between August and April, Travis (along with the rest of Highwire Interactive) were focusing on the shipping of their first title, GOLEM, a PS4 VR game. We kept in touch with Travis, keeping the dialogue open, but out of respect, chose not to pursue formal questioning until he was done crunching at work. At that time, we continued our line of questioning, and it's here where the most answers regarding T-bot were given.

Round One of Questions

RTBR: Was his colour scheme always yellow, or did he see different iterations of colour palettes?

Travis: I first thought of the yellow and black scheme, after I was out at a junk yard and old railway train graveyard. I was out the taking pics for textures and ref images for T-Bot. (He was always supposed to have been built out of scraps and junk). I saw some old yellow train cars. The yellow color looked so neat contrasting with the rust and old painted stickers and signage. I went directly home and started croping my junk yard/rusted train car photos into texture sheets that I could grab from before I even had started any modeling on T-Bot!

RTBR: What would T-Bot have sounded like? Would he communicate in beeps and boops like retail DOG, or did you imagine he communicated in a different way?

RTBR: Was T-Bot ever intended to function as an independent NPC, or would he have been used solely in scripted sequences like DOG?

Travis: So as far as I remember, he was always supposed to be a 'companion' to a human game character. But at the early game development phase when chatting about a 'companion side character', the human characters were not even established yet! What is an Alex?!?!? Heehee. There was even a first concept that showed Gordon with a little junkyard alien/lizard type creature sitting on his shoulder. [...] After that meeting another artist and myself started talking about it being something big and made of junk and wanted to be human. Like a junkyard Frankenstein animal. I drew a few napkin sketches. And really wanted the idea of him not being symmetrical. But solid. And my first model of him had arms that were guns. I always hated that I did that. Because even when I was modeling them it was the only thing I didn't think was cool. But I kept going anyways?? I still never know why I spent time doing that. Especially because I have always thought things or robots with guns for arms is stupid.

Round Two of Questions

RTBR: You mentioned a "little alien" - was it Skitch? Or a completely different creature?

Travis: Yes. That was one of the concepts. That is one of the better ones I remember. [Smiles]

RTBR: You mentioned those "napkin" sketches you did before - would you happen to have any you'd still be willing to share?

Travis: Yeah the sketches I did I probably crumpled and tossed right afterward. I just gave myself a general sketch outline, (like drawn notes), and started modeling to make things up as I go. I do that a lot when modeling.

Round Three of Questions

RTBR: What were the inspirations for T-Bot, design wise? Is it true he was inspired by Robby from Forbidden Planet? (Question derived from a community supposition T-Bot's overall design bore resemblance to the character.)

Travis: I don't know who Robby from Forbidden Planet is. So I guess the answer is no. He was just pulled from my head. From things I saw when visiting junkyard and random ideas probability in my head from so many syfy movies and books.

RTBR: Did T-Bot have two eyes, like early concept art for DOG did?

Travis: I don't recall early DOG having two eyes. My sketches for him never did. But my sketches turned out to be pretty exact to my Dog model in the shipping game.

Travis: T-Bot was always bipedal with proportions close to DOG.

Round Four of Questions

RTBR: What inspirations did you draw upon when you made the scanners?

Travis: I worked on passing sketches back and forth with the lead concept artist. He just sort of 'evolved' as we passed sketches. No reference was looked at for inspiration. Just our weird brains.

RTBR: Was there any earlier iterations of this scanner design/model?

Travis: There weren't any earlier concepts that i remember. He came about in around a day as a concept. Then I went straight to work modeling him.

RTBR: Did it always have the colour scheme?

Travis: Yes he was always that color scheme. [Smiles]

Round Five of Questions

RTBR: (We didn't directly ask Travis a question here, but the conversation just went in the direction of his work regarding the Antlions.)

Travis: One quick answer to the above about the antlions. When those creature were being made, the Team Fortress team needed help with some working concept stuff. So I was helping them on the top floor of our building for a few months. During that time HalfLife team needed also some help with the AntLions. My involvement with the Lions was making and designing the main little antlions.

Context: We'd dropped a few messages to Travis and whilst we keep our dialogue open even to this day, we'd taken a break from questioning for a bit due to the ongoing epidemic situation.

RTBR: You mentioned you worked on Team Fortress at that time. Was it Brotherhood of Arms (WW2 inspired), or Invasion (humans versus aliens)?

Travis: When I had my days on the TF team, it was developing as Humans and Aliens. I was mostly helping out on some R&D models, props, level building and testing. Most of the work during that time on TF was just trying different looks, styles, and gameplay ideas. And most was known it would be thrown away until nuggets of our work was going to span ideas and evolve into a different game. It was mostly a thought process time to generate ideas. 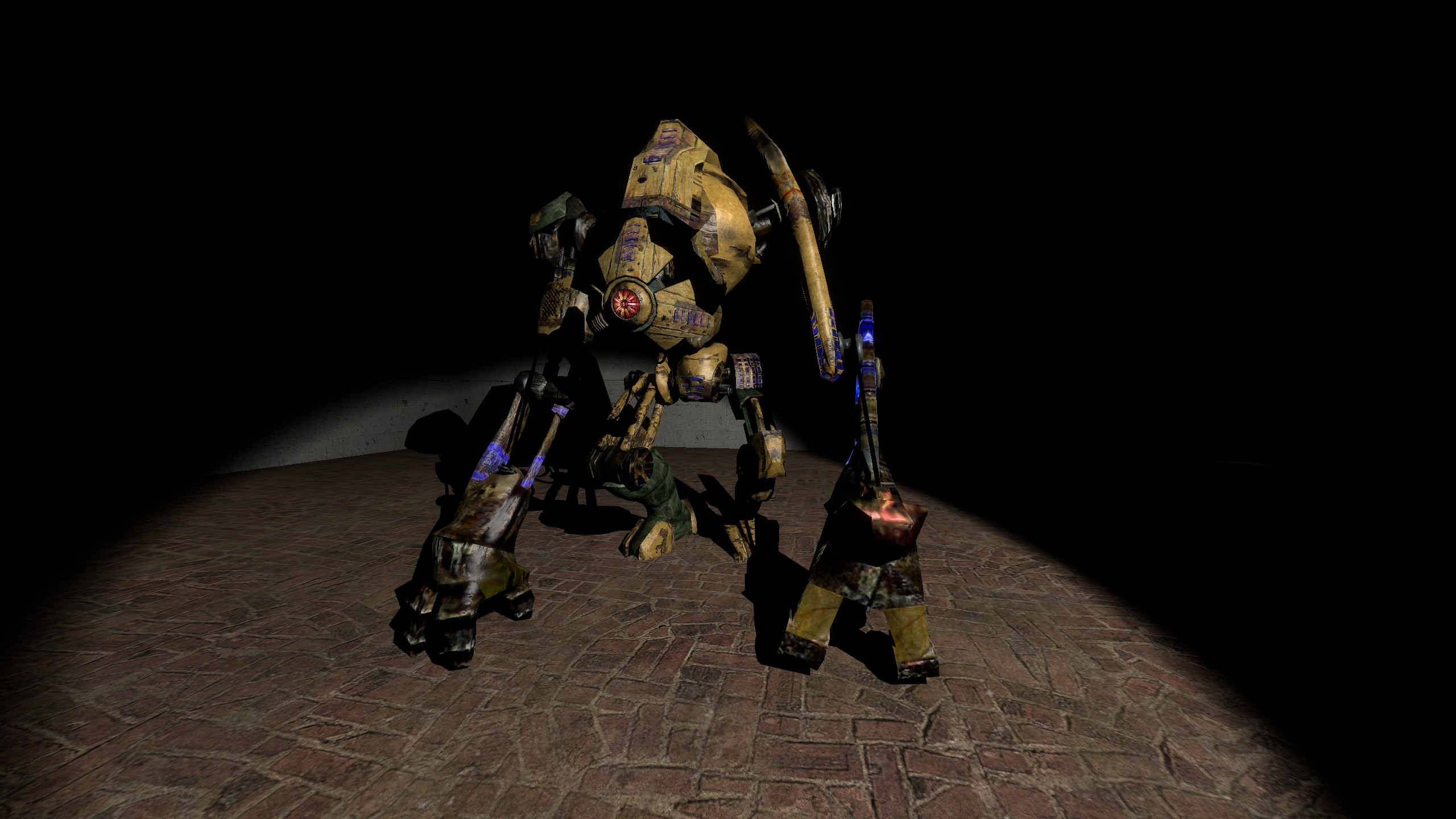 A remake of Tbot by a member of the team. Also the one we're using until we get it fully re-made.

There's obviously a lot to be drawn from our interviews. In RTBR, you can expect us to take full advantage of this new information in order to bring Tbot to life, and we've already started making major strides in that area narratively and more. There are also, of course, many speculations and assumptions to be drawn that were too small for us to ask Travis, but we won't be voicing those here. Instead, if you're interested, hop over to our Discord server, and feel free to ask us about what we think! We're, as we mentioned above, in discussion with other ex-Valve developers and already have great dialogues going that will, hopefully, lead to more articles like this one in the future. For now - enjoy, and be sure to join our Discord server to let us know what you think! Discord.gg

One more time, for posterity - We just want to please ask that the community don't suddenly barrage Travis with DMs about his time at Valve. He's a busy man and we're very grateful to him for sparing time over the last year or so to speak with us regarding his work. We're currently in conversation still with a few other ex-Valve developers, but if Travis gets a hard time from this, we'll have no choice but to leave those conversations to avoid them also getting drowned in emails. Please be respectful of the time he's given us and if you do choose to approach him, show respect and be patient in turn.

Thanks, and have a good one!

definitely was worth the wait! Can't wait to see what the final RTB:R design of T-BOT looks like.