Learn how history actively inspires Sails of War and at the same time allows creative freedom.

Posted by PortsideInteractive on Nov 12th, 2017

Seems like we have picked up a couple more passengers since last month's blog post. First off, and before I start: Welcome! More than happy to see an increasing interest in the game and also thank you so much for your feedback and support.

At this point, I have moved on from water materials - to which I shall return at a later date - and am now concentrating on laying foundations and finishing the first ship. You might have seen me post props and details on Twitter. Those smaller models will decorate the ships and hopefully make them more interesting.

As said before this first ship will be the standard and introduce a pipeline for all future ships to follow.

Now I was going to talk about our ships and to a larger extend about the setting:
You will - without a doubt - have noticed that thus far we have a wide range of periods. Whilst the first 3D model is styled after a British sloop circa 1770-80, the other ships - on our concept drawings - range back to the early 17th century. Also, not all of the ships are the Kings own. Even though in most images she is flying a pirate flag one of the ships shown was directly inspired by a Dutch Republican ship. 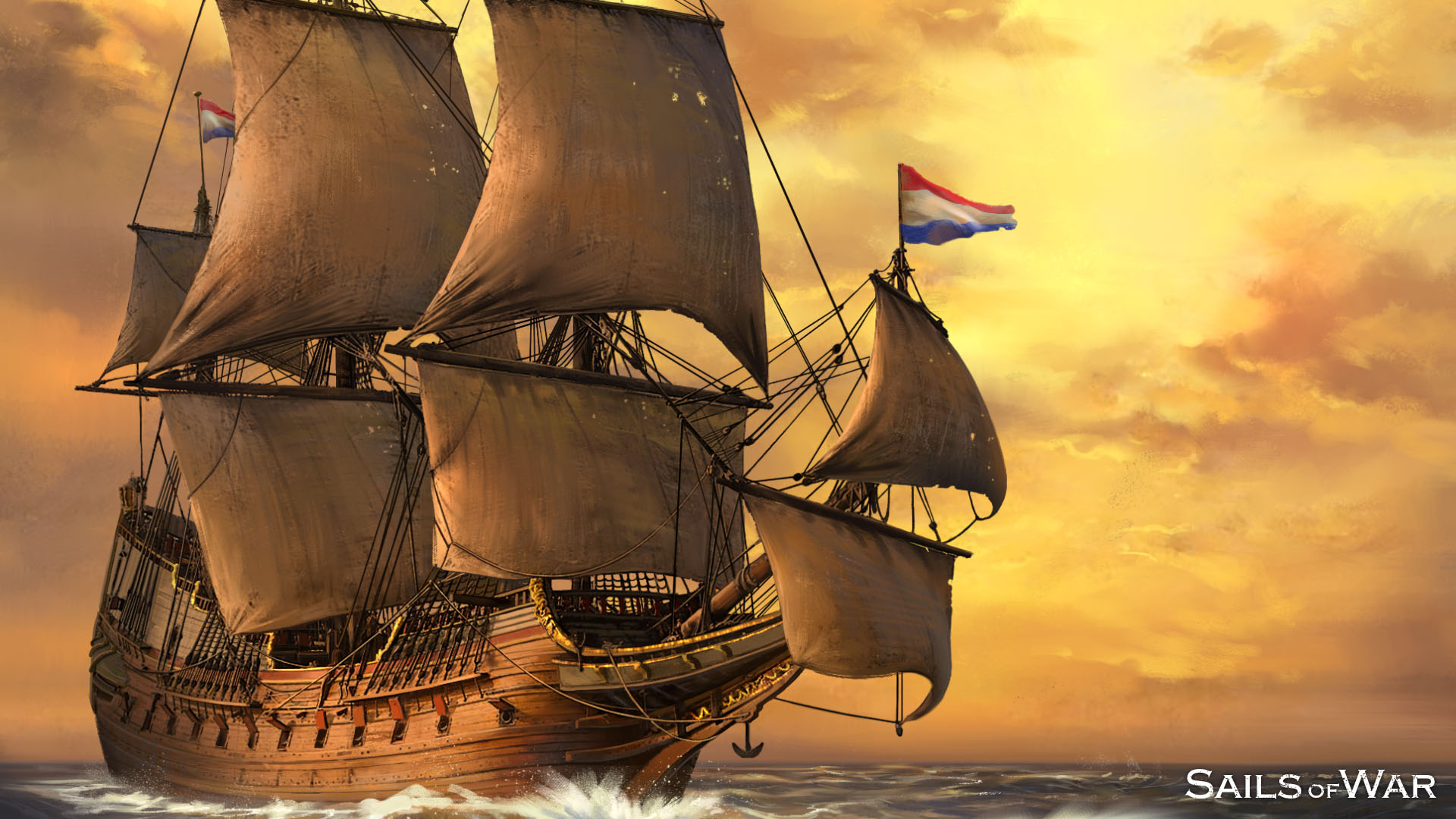 I love history and all things historic but this really does not add up. We are pitching ships against each other that in reality sailed much different waters, at much different times and very often had already sunk or been broken up before their counterparts had been build.

Sails of War is most certainly inspired by history and to an extend stays very true to real life.

Having an interest in history and not wanting to misrepresent facts, there is nothing that irritates me more than movies and games that claim to tell a historical tale but end up telling a much different, factually wrong, story.

Claiming to be historically accurate, claiming to have done a ton of research and making it sound like your game is like a history book - when it ends up not being one - is dishonest and rather disappointing.

Being inspired by history allows the game, and me, to do all sorts of fun things. It allows us to pitch ships against each other that look wildly different - because they are from a different point of history. But also on a smaller scale: It allows me to add details to the ships were likely there would have been none.

I posted crates and a cover prop on my Twitter recently. It's very likely for such cargo to have been stored under deck - especially on war-ships. But it’s a lot more interesting to see it out in the open! 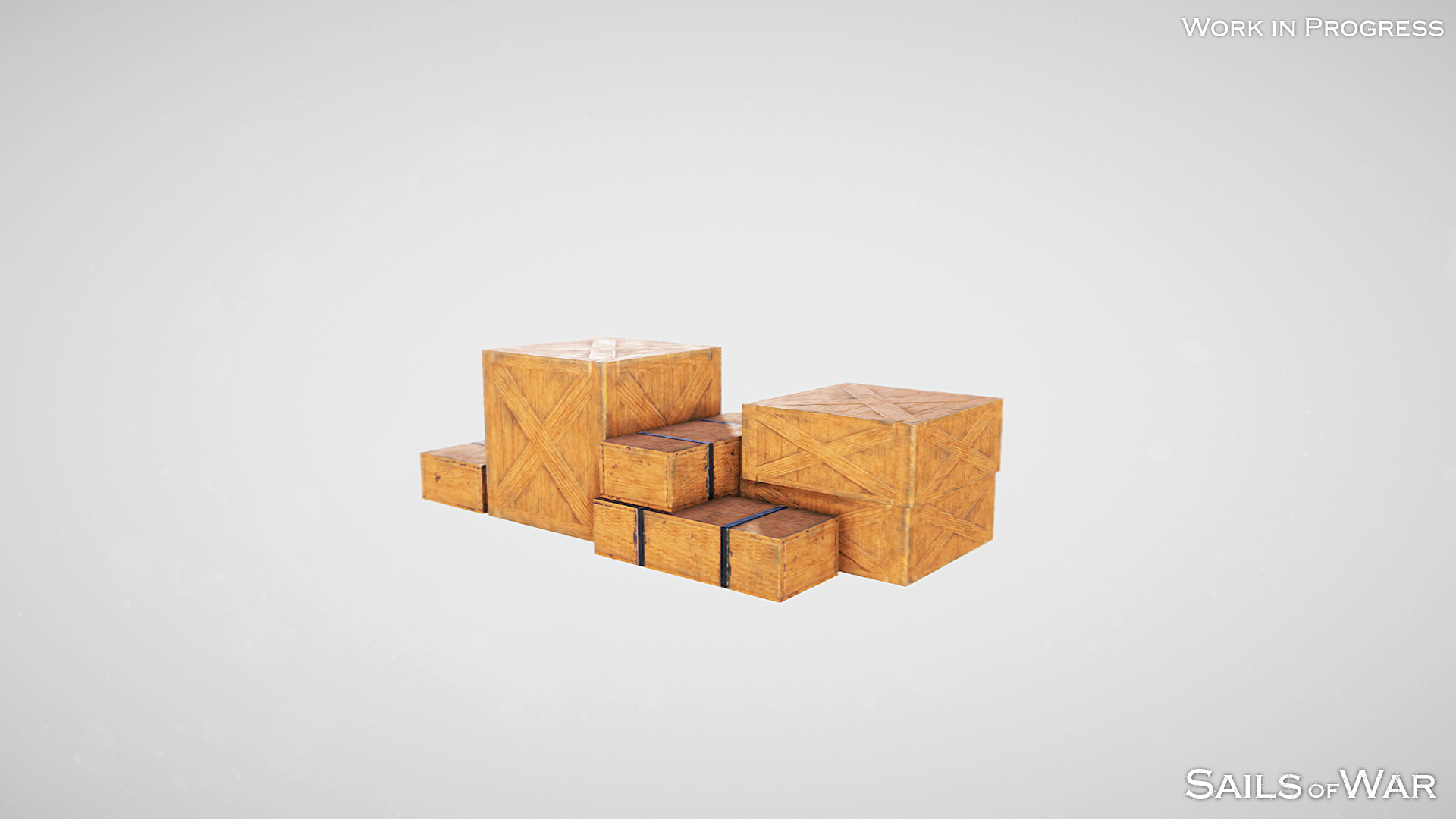 People have asked me: “How can a game about sailing ships be any other thing then slow and boring?”

Well, here is your answer: Sails of War is no simulation, I want this game to be fun, first and foremost. It won’t end up being motorboats - don’t worry. But in no way are we bound to history or facts.

Now, my love for history and for figuring out how things work will likely lead us to having a very accurate looking game, but at the same time gameplay is most important to me. In this specific case, I don’t care if under the hood a ship does the real historic speed - I only care about it being fun.

Long story short: There isn’t really as much a setting as there is a large mix of history. It’s sailing ships on water. As far as actual types of ships go: Really anything between 1550 and 1830, assuming it’s a sailing ship and overall fits with the others.

Those older ships won’t have a disadvantage. And while each ship will have different characteristics and statistics no one ship will have a penalty for her age or build.

I hope that gives a small insight into my design and ideas. If all of this was wildly confusing please leave a comment. I have spent the last year and a half thinking about all of this and to me, it’s all logical - which does not mean I did a good job at writing those ideas down, here today.

So again: Do leave a comment here or on Twitter, or chat in real time and join our Discord. I’ll see you there - or if not then next month when hopefully I’ll have finished the first ship.