Post news RSS I Am Overburdened, quality over quantity

Where was I for a month again?! Many friends already asked this and other difficult questions about the game and my progress and “quality over quantity” was the best answer I could give.

Where was I for a month again and what's up with the title?! Many friends already asked this and other difficult questions like "I planned to finish this game in 4 months and I've been working on it for 6 now" or "Last month you kind-of promised to have an open beta and a complete game by now" and the title was the best answer I gave. Actually I really believe in what I'm doing and the way I'm doing it. I know it is madness, game development is about risk management and this project is becoming more and more risky day by day (risk of losing a lot of money and losing the ability to continue full-time game making :( ).

The thing is the game was NOT GOOD two months ago. I could have rushed it to market, I really could, but my ghost whispered to me and I had to follow its lead. I'm in this for the love of it and for the love of the craft as a whole. I want to make games and continue making games as a living, but at the same time I want to be good at it and be proud of what I make.

Now with this out of the way let's jump onto the progress in the last four weeks :) !

Few people said to me, based on my last entry, that the game starts to look really polished. I felt really happy about that, because I haven't actually started on my planned polishing tasks. Besides composing the sound track and working on finalizing and balancing game systems, the last few weeks were spent on polishing the look and feel of the game :) .

First I added some sprite effects to the player movement which fades out over time. This is a great visual cue to show the direction and the old positions of the player and also makes the "dusty & old" dungeon image more believable :) .

Then a subtle bounce was put on top of the original player movement transition. It does not seem like a big addition but it does make it feel more like walking than the old moon-walker dance move :D .

The last movement tweak was configurable sprite and sound effects for levels. Now there is splashing in the caverns instead of dust puffs as an example.

This is something which is absolutely not a necessity for a game, but once you saw the Diablo 3 health globe it cannot be unseen :D . Back to reality. I wanted to add a subtle sliding animation to better signal the player about the significance of the health change. I think it turned out wondrous :) !

One nice touch I really like is atmospheric sound effects. In many games if you mute the music you can easily hear a lot of background effects which do not come from entities in the world but from the environment itself. Examples include crackling fire, rats squeaking, stuff like that. I Am Overburdened is not a gothic themed nor a horror game, far from it actually, but I wanted to achieve a "spooky" overall feeling so I added something similar. Dripping water in the caves, rattling chains in the dungeons etc...

This was a feature which was missing from the game for so long. I actually implemented the underlying system while working on the prototype (so really really long ago), but I had no time to actually add unique skills to the monsters :( . Now each and every one has it's own "thing" which makes them memorable and really stand out. Not just attribute differentiation, like :O careful this one is "strong", this one is "fast", bla bla, but instead something like this: careful this can dodge your attacks, or that one can interrupt you and cancel your hit, or that pesky beast can resurrect so it is a real damage sponge!

There are some neat ones which I will not spoil because they are really fun, powerful and buy the game once it's out :P (there is no fun in spoiling everything) !

During a play-testing round I realized there is a huge problem with the pacing of the game. The game-play did not change enough during a full play-through regardless of the changing environments, monsters and increasing power levels. Another problem a lengthy game usually had is RNG (those infuriating random numbers :D ). It felt a little boring and a bit too random (not enough control over the outcome). I realized a shop could solve these issues, but not a typical buy whatever you want when ever you want type, but more like a rogue-like shop ;) , that allows more player control but it also presents another hard choice (as many things in rogue-likes). 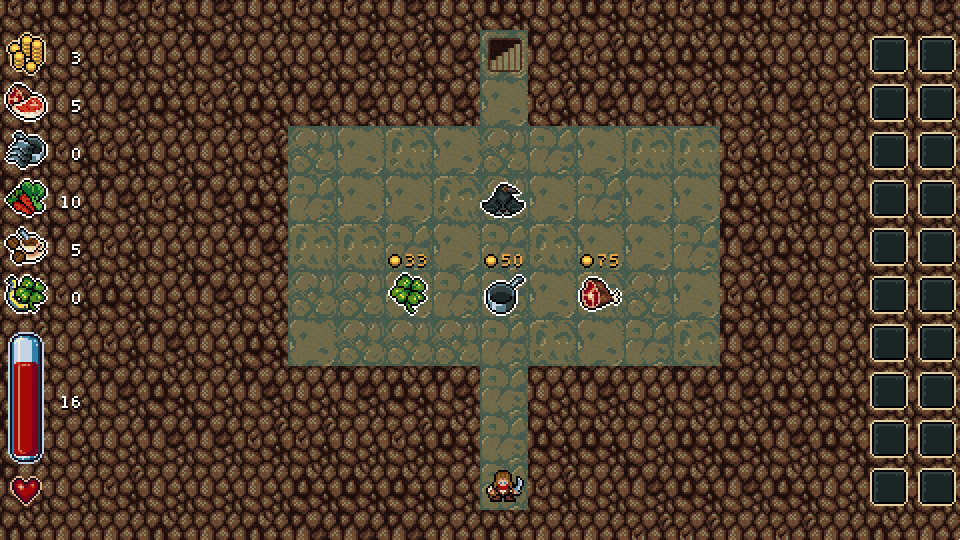 Welcome to the Black Raven Market. Every first shop level sells random pickups (health potions, attributes etc...) and every second shop level sells random magic items, but you can only buy one stuff on each level! I'm evil, I know it :D MUWHAHA. In a full play-through you will encounter 10 shop levels which gives some extra space for player choice and nicely breaks up the "kill some monsters defending important loot and run to the next level" game-play loop.

Music makes the world go around!

I'm not a musician and the following sneak-peek into the official soundtrack of the game is proof of that. Regardless of it being pretty amateurish I'm still really proud of it :) . Instead of trying to make AWESOME music (which I simply can't :( ) I focused on adhering to some fundamentals I settled on before jumping onto composing:

The full OST is around 15 minutes so its my longest work in this regard yet + it is long and varies enough to not get too repetitive during a full play-through :) .

I should also mention, that I used the wonderful Bosca Ceoil tool for composing. It's quite limited, but it is really really easy to use. You should definitely check it out if you would like to make some chip tunes. It is free and works in the browser too!

Thanks for reading!
Stay tuned.