Season's greetings! Unfortunately, we won’t be releasing the first public demo this year. We are getting closer and hopefully it won’t be too long into the next year before we get there. Nevertheless, here’s some of what we’ve accomplished this month:

There are now Gnome Caps! Which come in a variety of colors, not just green and red. There are also two variations, one with and one without the furry ball.

You can now attempt to pick locks on doors or containers if you possess a lockpick. To lockpick, equip a lockpick and simply hold the ‘attack button’ while looking at the locked object. The radial meter will fill on your cursor and once full you will either succeed (picking the lock) or fail (breaking your pick).

Lockpicking experience points will be rewarded whether you succeed or not, however failing will reward less. Dexterity increases the speed the radial meter fills but your Lockpick skill determines your chances of succeeding. So you can be a very slow but skilled picker, or vice versa.

New consumables: blueberries, strawberries, and acorns. As well as the new strawberry and blueberry plants. Oak trees, which have already been present for a while, will now drop acorns.

We wanted to get in some more ingredients that can be used for alchemy and we plan to make a few more before the public demo.

NPCs are now using a system referred to as Goal-Oriented Action Planning (GOAP). As opposed to a State Machine, where transitions must be clearly defined between all states, GOAP allows more flexibility. In GOAP, you define actions and conditions for them that the planner uses to find a most cost-effective path towards the desired goal. Since, eventually, we want to have many variations in AI behaviors, this system makes more sense. However, it takes quite a bit longer to setup.

(Guess I shouldn’t have dropped that Quarterstaff over there…)

Jon has setup some goals that NPCs will attempt to fulfill such as Arming and healing themselves. If there’s a nearby weapon, and they are unarmed, they will go grab one as shown above. Also, they will consume healing items when their health is low. In addition, NPCs can actually use ranged weapons now, although not very effectively in many cases – it’s still a WIP. Anyway, It’s coming along and definitely makes interaction with NPCs more enjoyable.

For anyone interested in how GOAP works, here are some of the sources Jon has been using to develop the system in The Arcane Relics™: 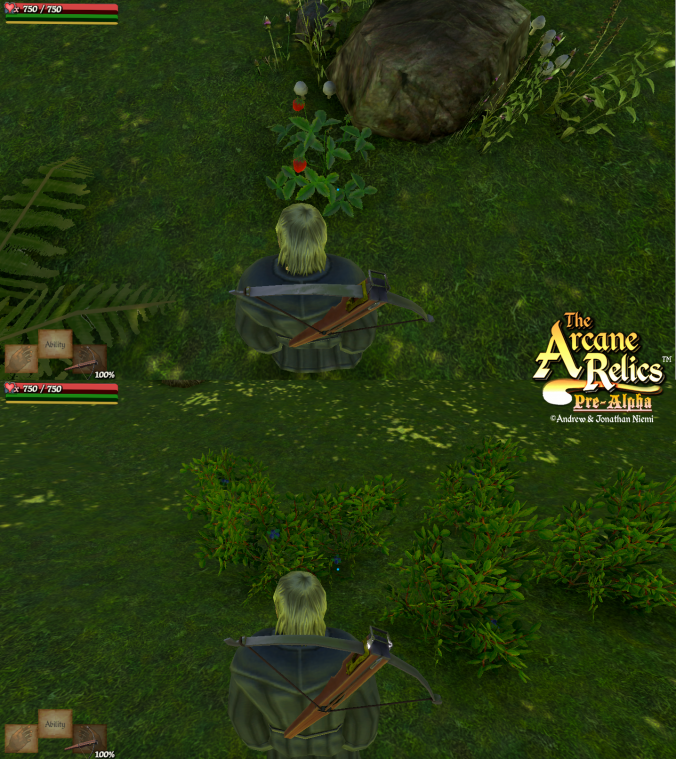 We thought it was a bit cheesy having only primitive cubes & spheres for acquiring abilities in the public demo, so we made some quick scrolls to solve this. And now they appear on these diagonal shelves. 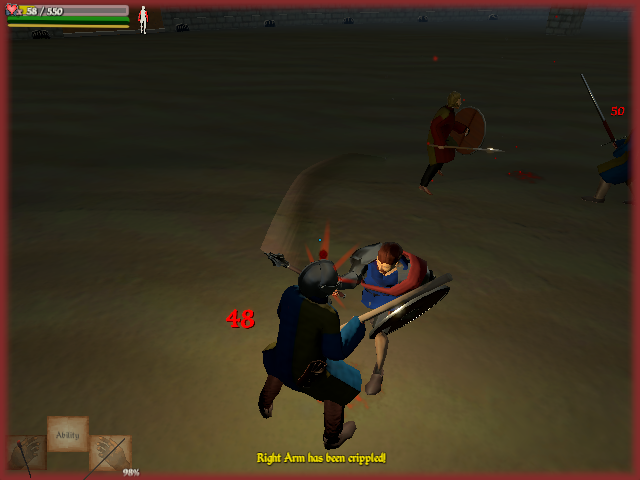 We got a lot of feedback about how the previous hurt frame was obstructive, which came way into the center view. We came to find it annoying ourselves, especially when you had low health – as the opacity increases and remains – but we still wanted to keep the additional feedback for when damaged or being close to death. Therefore, we changed it to the simple smaller outer frame as shown above and saved some texture memory in the process.

We mentioned (in our last post here) that we were planning to try out Forward rendering for a while. Well, after weighing the pros and cons, we found that we are sticking with Deferred rendering. We are using many dynamic, non-baked, lights, which Deferred handles much better than Forward, and think it’s vital to the design and look of the game. We also have found some workarounds and made some compromises for other issues we were having with Deferred rendering, like the outline around objects intersecting a player’s cursor.

Outlines around objects intersecting a player’s cursor will now be visible to all players. Previously, what highlighted for you would not be visible to other players. Alas, the system Jon was using created new materials and memory leaks, so good riddance. In Forward rendering, he was able to hide the outline per view with the new system but can’t seem to get that working in Deferred. So we have decided to have outlines visible to all players! Have a look:

(It’s kinda nice to see what other players are looking at.)

We’ve set the normal cursor and the object outline to tint to the player’s color, which is based on their ID (e.g. Player 1, 2, etc.) to hopefully make it clearer whether it’s your highlight or not.

If you’re interested in the differences between the two rendering paths a quick search of “Forward vs. Deferred rendering” would give you many results, but here are a couple of links anyway: