Flux does a mini-retrospective, plus a tonne of dev screenshots.

Hey guys, Flux here. In this post I want to elaborate a bit on the history of Blade Symphony. While this isn't a full retrospective (the game's not done!), I want to give you some insight into what this game means to me, personally, and why you should vote for us for Best Upcoming Mod of the Year.

It all started with a little game called Jedi Knight II: Jedi Outcast, a surprise title from then Raven Software. When I was in college I played countless hours of the game and discovered a niche dueling community that played the game with nothing but saber duels. 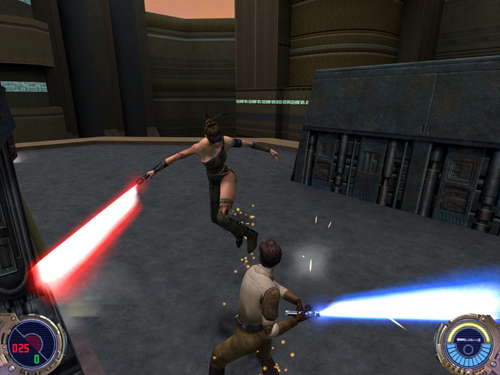 We purposely played the game with no force powers, saber only, duels game mode and found it to be surprisingly fun. A duel community formed, and a simple act of "bowing" before a duel signified that you were part of this elite player-base who could kill anyone with just your lightsabre.

The gameplay itself was simple: you started off in front of your opponent and were given a sword with three different stances. You could direct your attacks in various directions and deflect incoming attacks. While you could jump, landing somewhere near your opponent meant death because one strike could easily kill you.

This gameplay was so addictive that I was shocked that no other titles followed suit or have had any similar mechanic since. And, while there were sequels to Jedi Knight and other games had adopted these elements, it was the constraints imposed upon ourselves as players that gave the game mode its addictive qualities. 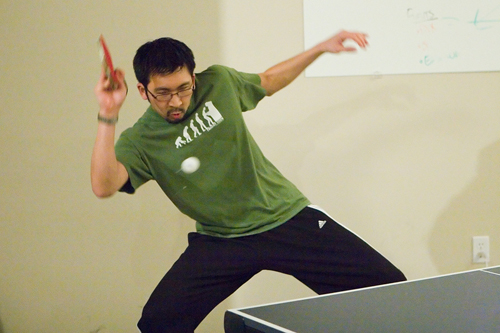 A ping-pong player engrossed in the game.

Constraints matter. It allows the game design to be highly focused, in the similar fashion that games like ping-pong, tennis, chess, or Go are the amazing games that they are, because players are focused on the details rather than overwhelmed by broad but shallow featuresets which are common in so many triple-A games.

A sudden epiphany struck me in the summer of 2006, my first year out of college. I realized then that I had the skills to actually make this ideal game - why not actually do it? 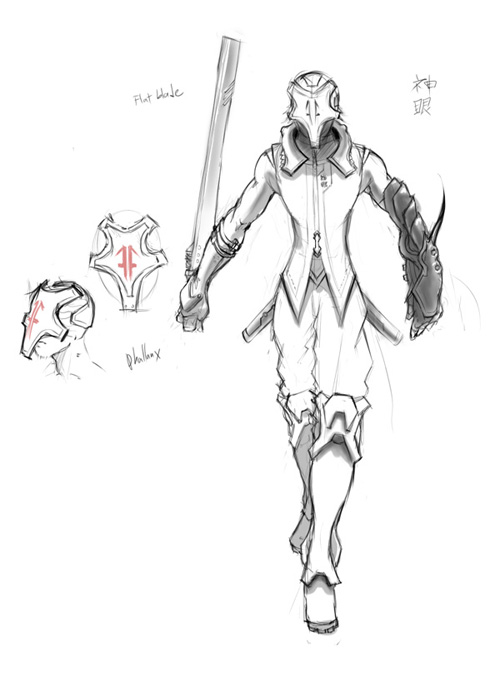 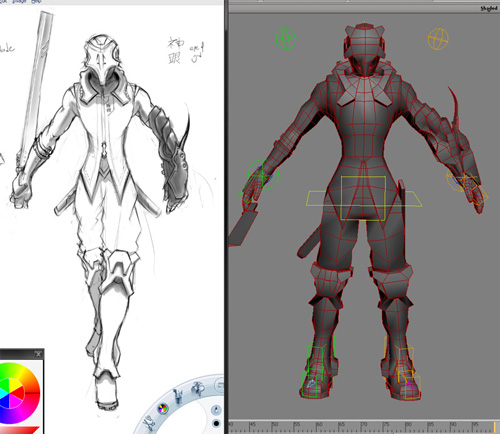 My friend Jason Balanza and I thus started Project Berimbau. It would be a pet project to include all our crazy fantastical ideas: a universe where you can control either samurai, cyber-ninjas, or knights and play in a "spatially-relevant" sword fighting duel game. 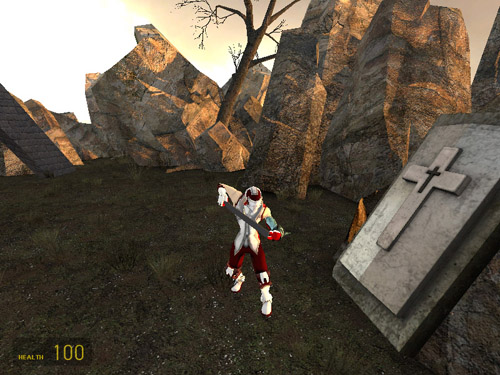 We were fans of anime and film, so we drew from every source that inspired us. We spent countless hours studying fights that we thought looked cool in movies and TV shows like Samurai Champloo, Blind Samurai Zatoichi, Casshern, Fearless, Gladiator or Azumi, to name a few. 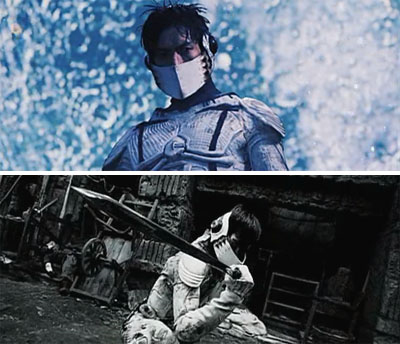 Casshern's outfit in the film. 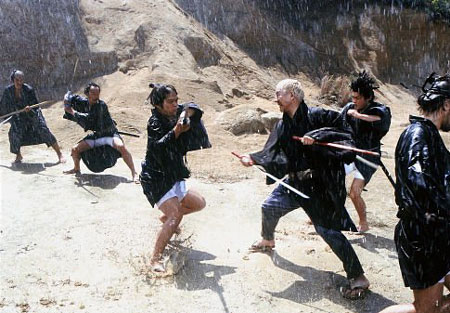 Zatoichi facing off against Yakuza.

When we finally had something to show, we posted right here on ModDB. You can even browse our old design documents which contain a bunch of our old concept art, storylines, etc.

Technical difficulties struck, and it stalled us for a year and half. Project Berimbau was put on hold, and there were actually experiments to move it off the Source Engine and implement it on the Quake 3 open source engine. We even had a build with blocking in Quake 3!

Nearly two years after it was put on hold, Jason and I decided to restart the project after the Source SDK had been updated and numerous bugs were fixed. We realized that we needed extra help, so we formed a team called Ninja Workshop which consisted of six people. 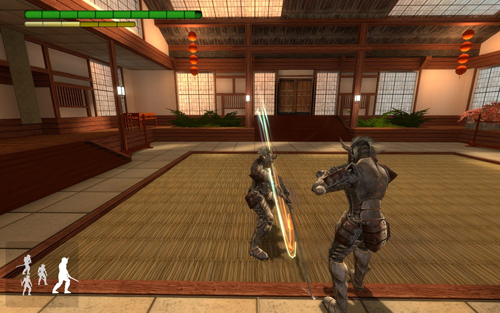 An early build of the game.

Development in Ninja Workshop went pretty smoothly. At this point we experimented with many different features, such as having a stamina bar, various stance switching methods, a lock-on camera. Most of these features ended up being dropped for good reason (for the most part, they weren't adding fun!). 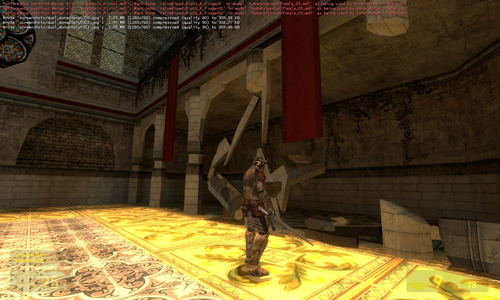 An example of a feature we had to cut. 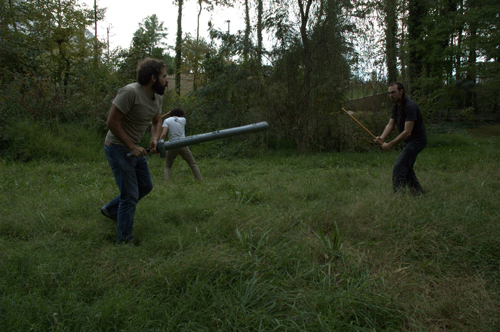 Over the years I've worked on a nearly daily basis with the fine gentlemen who brought you Dystopia. We've had meet-ups where all of us from around the world fly in and hang out for a week, just to develop games.

These talented, unsung lads who have given cold hard effort to deliver what you see today are the heroes who truly deserve the Mod of the Year award. What you see today is the product of four years of insane work just to make a mod. 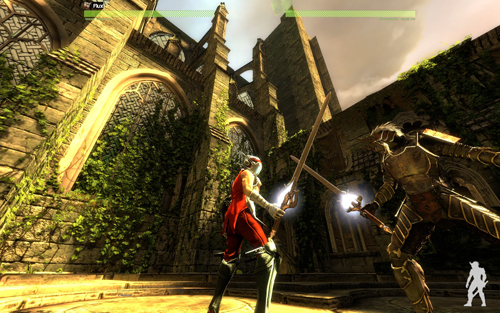 Historically, mods die out almost as soon as they are released. Mods cannot gain traction without a huge and loving fan-base, such as yourself. I want to end the post by saying that this mini-retrospective is not meant as a circle-jerk to win your vote. I believe in every fiber of my being that Blade Symphony deserves its time in the limelight. I only hope we can get everyone playing the game as soon as possible, and get as wide an audience as possible at launch - so that Blade Symphony can have a lasting impact.

You can follow us on twitter if you want, or Like our page on Facebook. And just for completeness' sake, here are our forums where you can talk about Blade Symphony, Dystopia and Puny Human in general.

Really awesome. But, did you guys accidentally post this in the wrong mod?

I know. I was just wondering. It's still cool.

Already had my vote :D I love Dystopia and can't wait for Blade Symphony.

Casshern was an awesome movie, even got my 59 year old father to watch it and he thought it was pretty cool.

I play alot of Jedi Academy, have since 2005, one of my favorite games. Like you said, no force powers, no guns, Sabers only, and Staffer saber is for noobs, duals are ok, but real players use Single Saber Strong Style. :P

Great little update. Interesting to see where you got your inspiration and learning a little more about how the mod came to be. And definitely +props for Jedi Academy. Ah, good times, good times...

I remember when I first found this mod on here two years ago, I'm glad to see that it is finally able to be realised!

I like this mod but i don't vote for mods/games that beg people to vote it just annoys me.

read it and got so much respect fot what you guys are doing and what you already did! voted, and keep it up btw. ;)

Loved Jedi outcast, are there still people playing it? If so I think I might have to go looking for my CD...