New year, another month and a new HLW progress update. As always, this is where i post all the HLW news. Trailer, new models, improved maps and more!

Welcome to another Half-Life: WAR Progress Update! This is January 2021 and there's a couple of new things and some improvements for HLW.

Yup, that's right - i've made a new trailer for the mod, replacing the old, outdated and shitty trailer i made back in freakin' 2018! Here's the new trailer:

The first new thing i want to show is the updated Civilian model, which was made by BrussTrigger (great guy btw) and these look seriously awesome, and i hope you like them too. Here, take a look at the model: 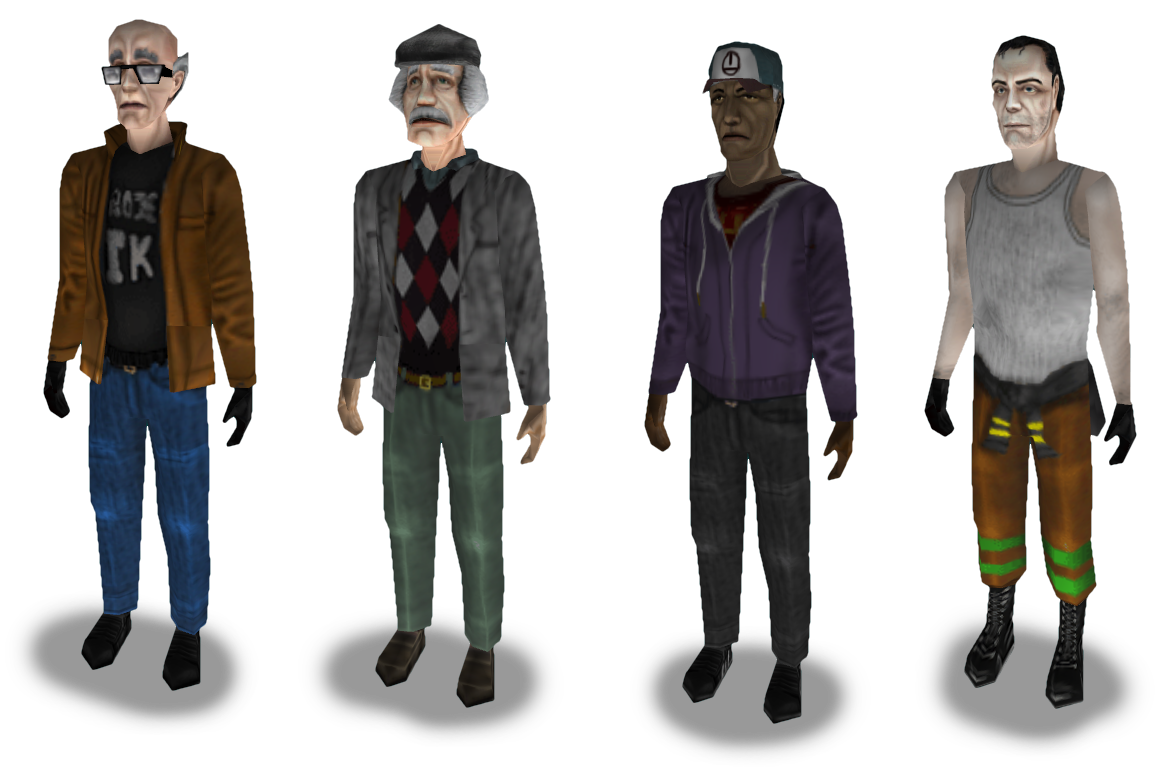 BrussTrigger's improved Civilian models are definitely a big improvement, and also has different submodels for the body as showcased on the render above.

Another new model is a Beretta pistol attempt that i made in Blender, it doesn't have textures yet but i hope you like it: 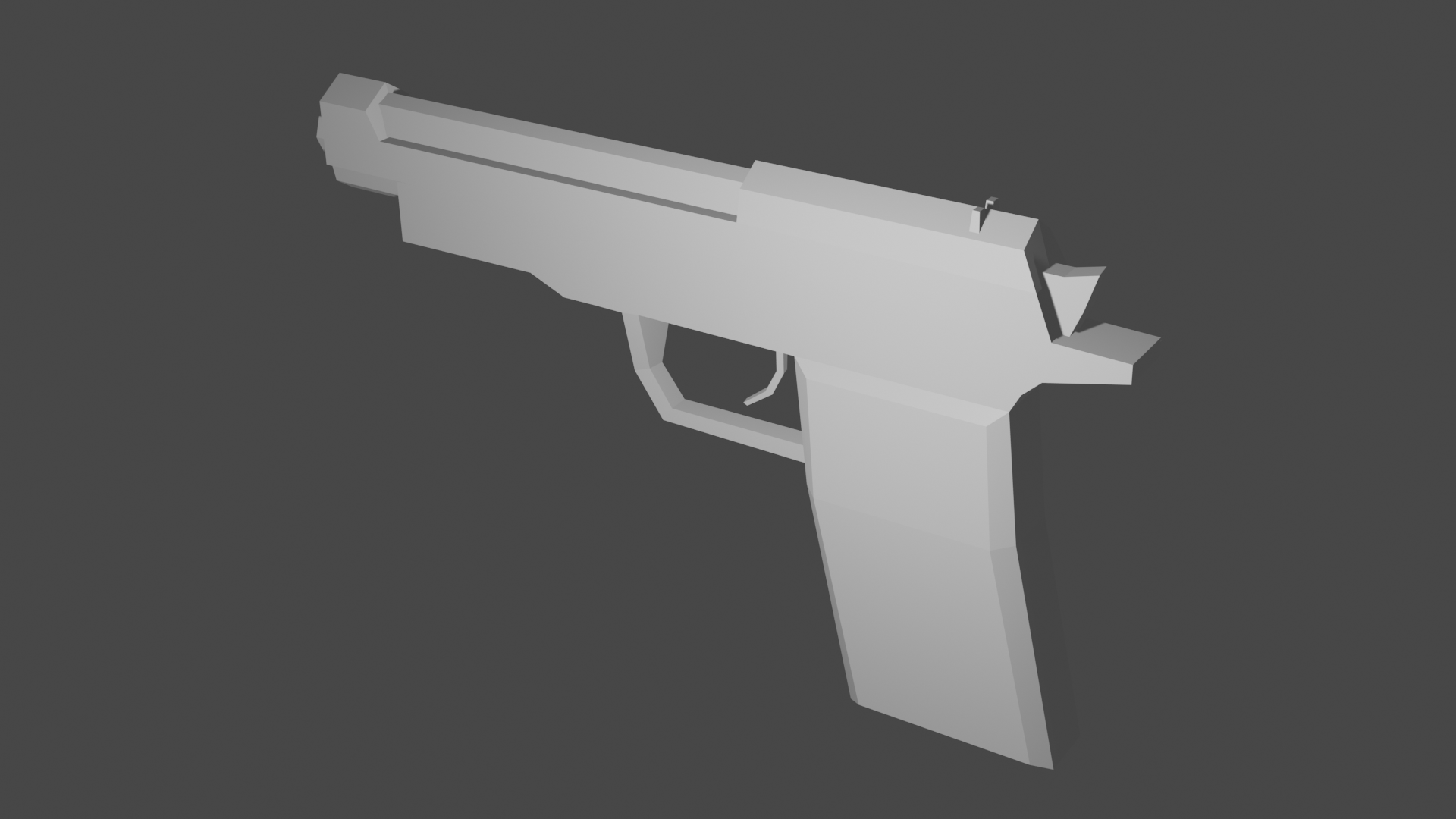 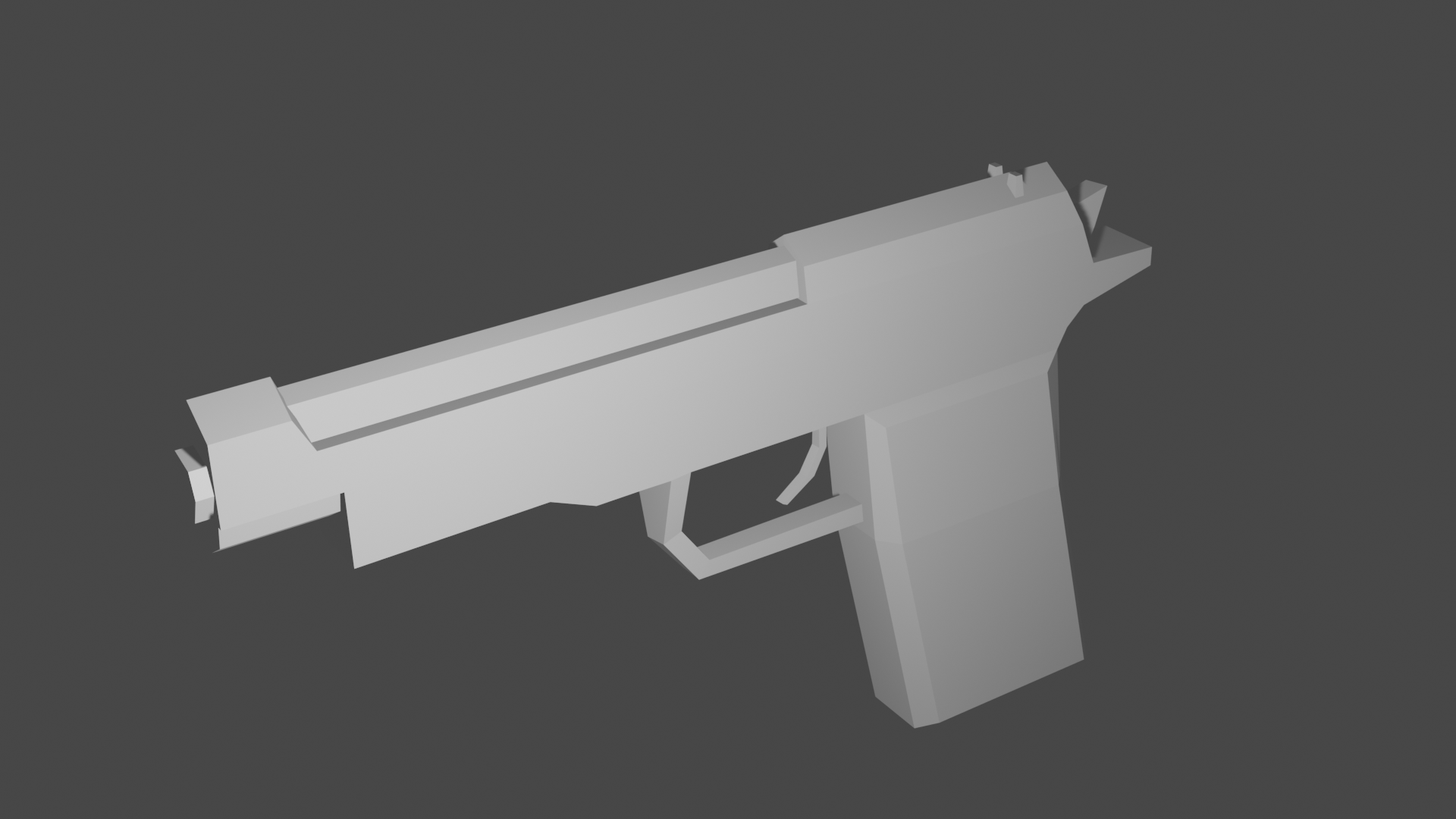 This beretta model is going to replace the default HL1 glock that the mod currently uses.

Lately i've been working on Level 2 for the mod, i've released screenshots for it on the mod's page already and it's also present in the Trailer, but i'll show some anyway: 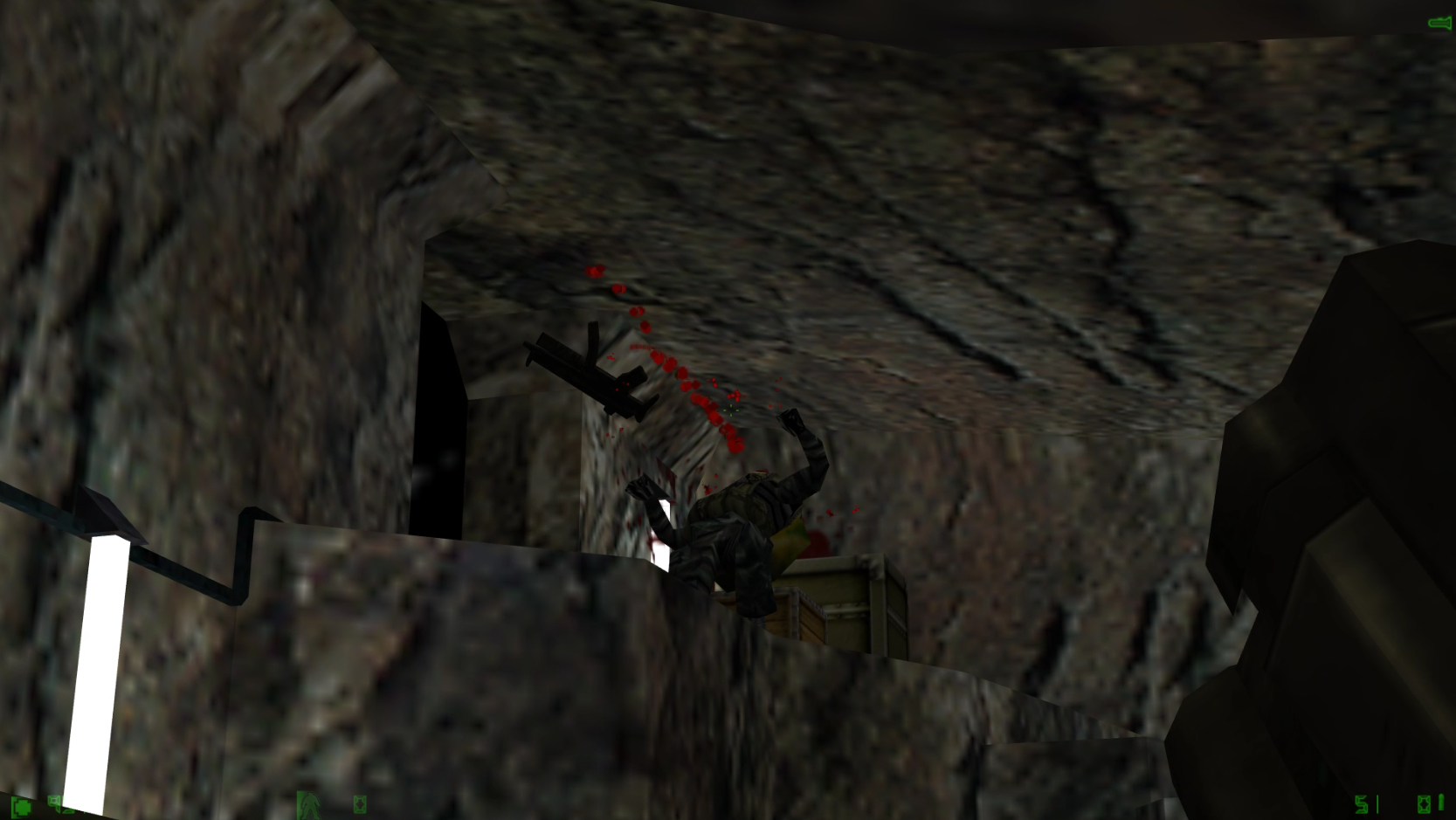 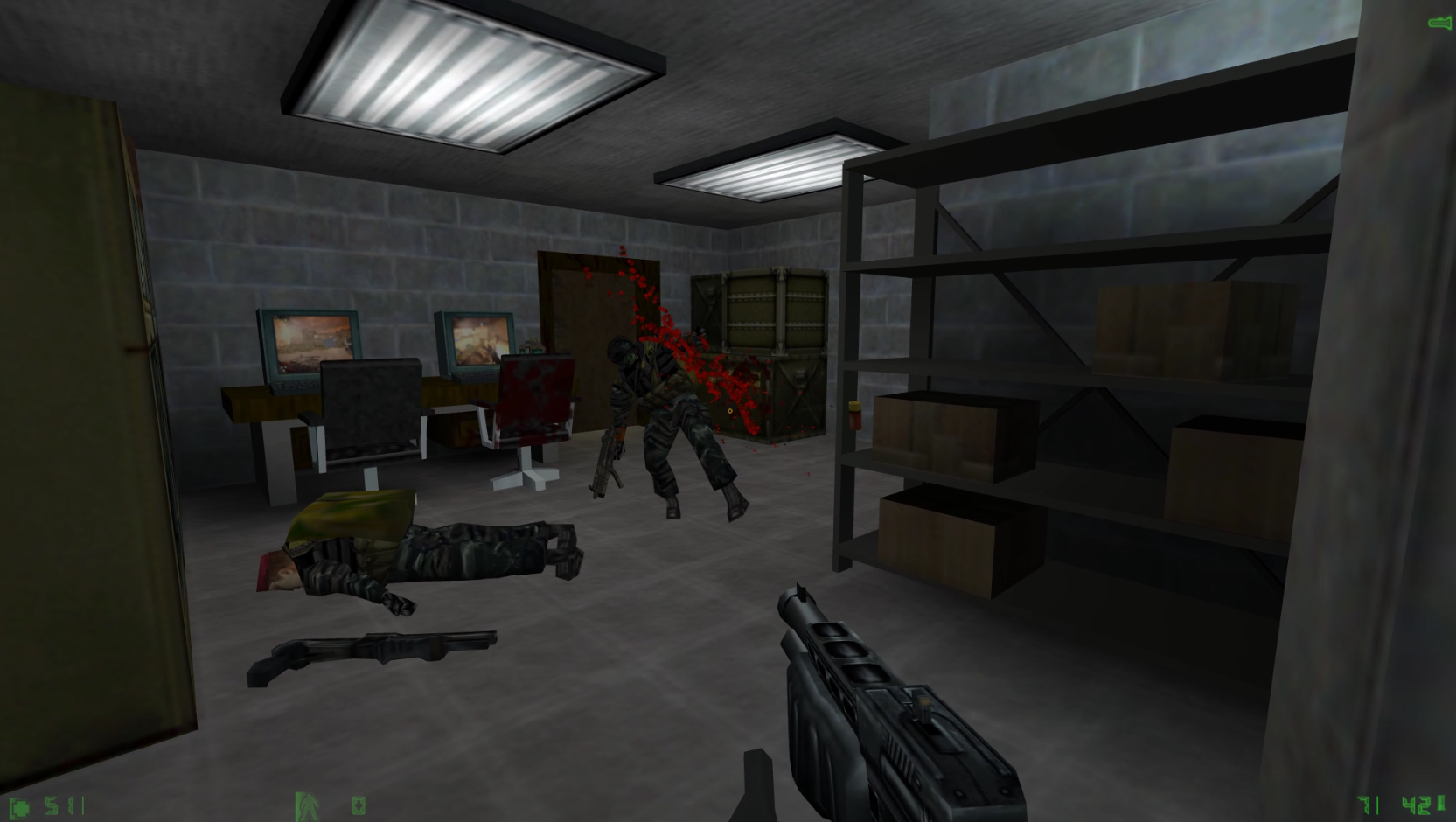 You can see more of the level in the mod's page and in the Trailer.

Also based on the feedback from the mod's Beta-Testers i've started improving the first level, added some improvements like more cover, alternate vent entrances to rooms, etc. You can see some of the improvements in the Trailer.

Also more new stuff - CSTime, Creator of the mod Rough-Life has offered to help me with mapping, so he made the desert map you see in the Trailer, it's still a work-in-progress so it'll look better later :)

Here's some screenshots from it: 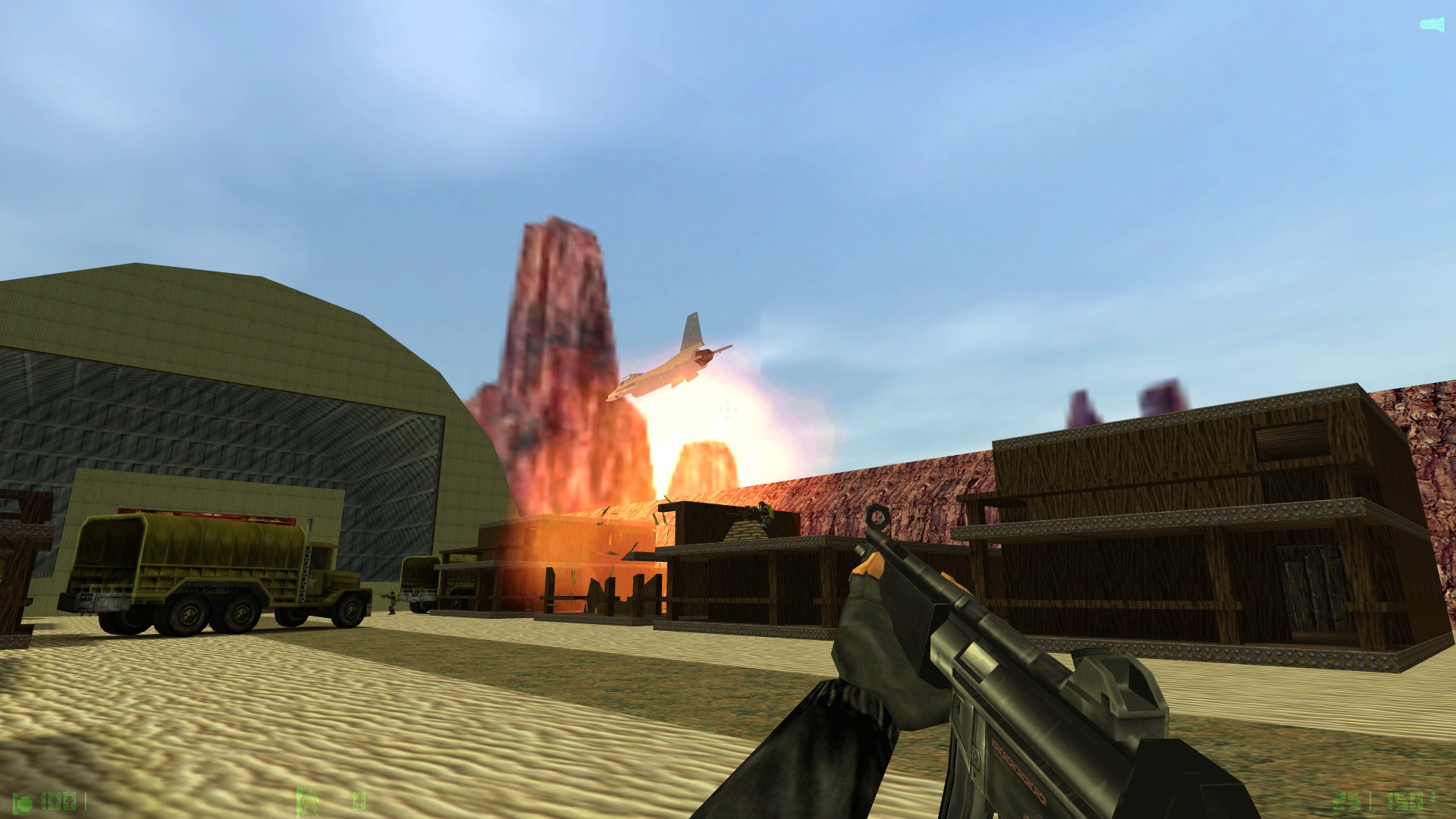 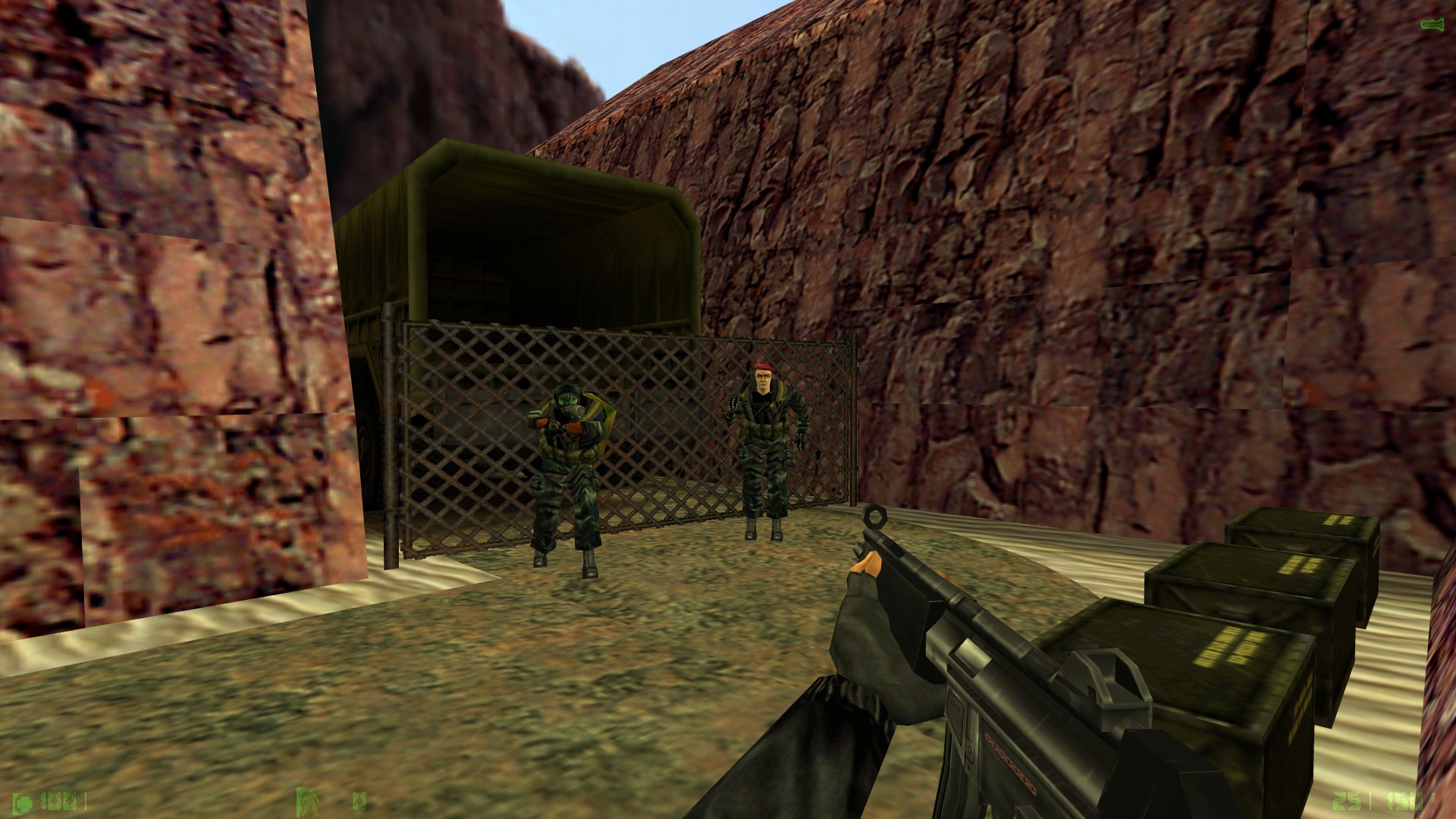 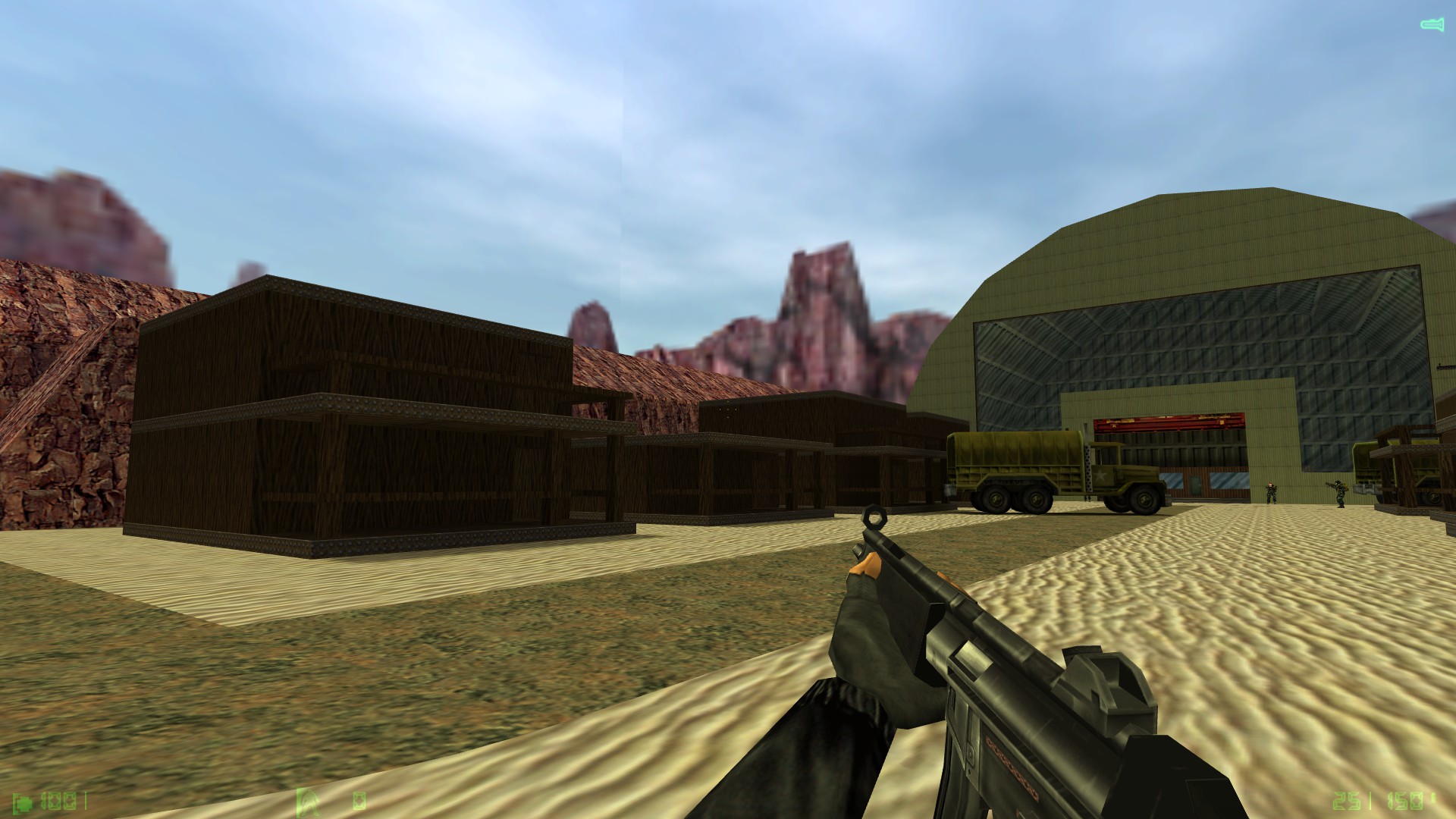 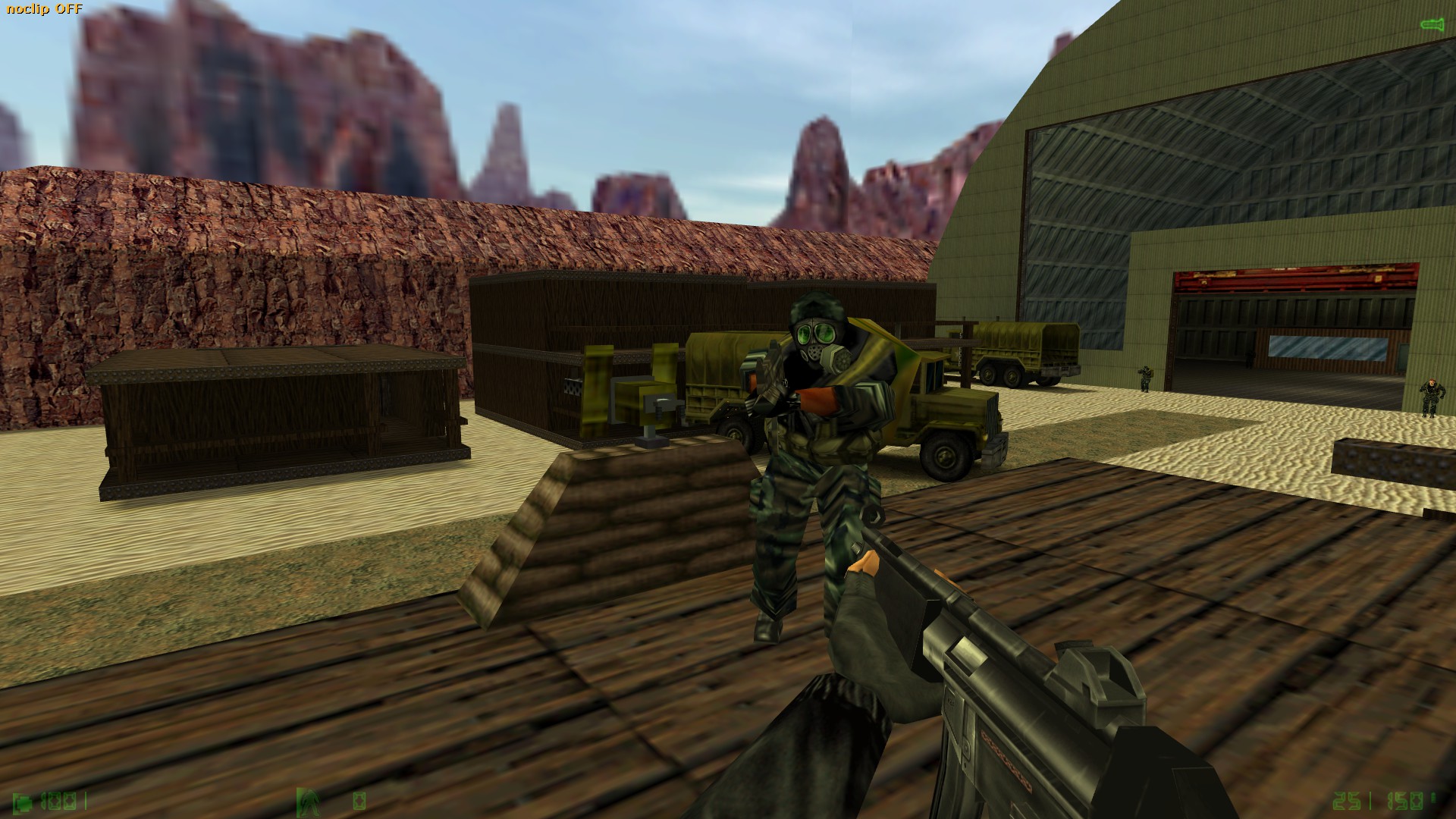 So that's it for the most important new things, now let's move on to the other new stuff.

A feature suggested by Admer456 was the terrorist corpses flying in the air near an explosion like in the mod "Half-Life: Invasion", i've successfully implemented it into the mod, but right now it's very subtle and it's kinda hard to notice since the terrorists will most likely gib, but when they don't, they fly up in the air.

Here's a little video showcasing that:

Another thing is ally grunts! Right now the ally grunts are the most basic allies, they are basically normal grunts but as an ally, the faction is controlled by a spawnflag in the editor. But however later i'm planning to make the ally grunts more fleshed out, as a seperate entity, add more weapons that the npc can carry, and make them be able to follow the player. Here's 2 little screenshots of the grunt VS grunt action: 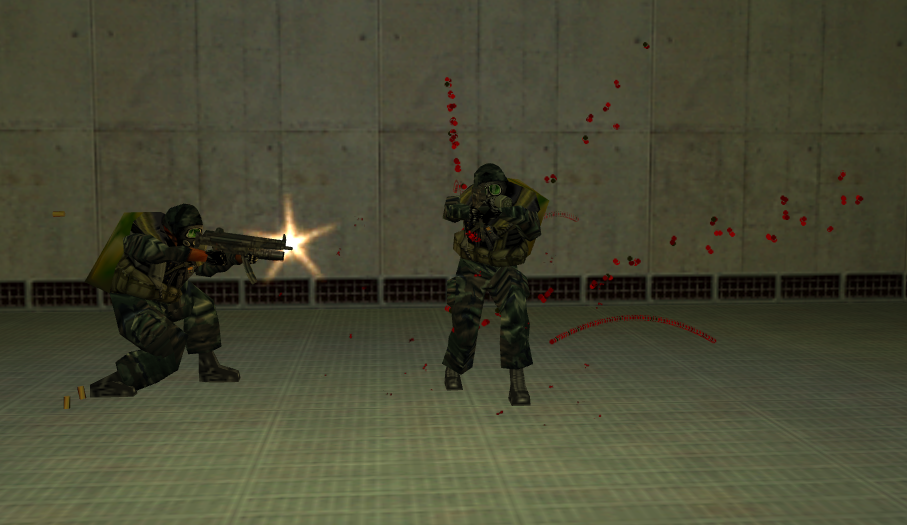 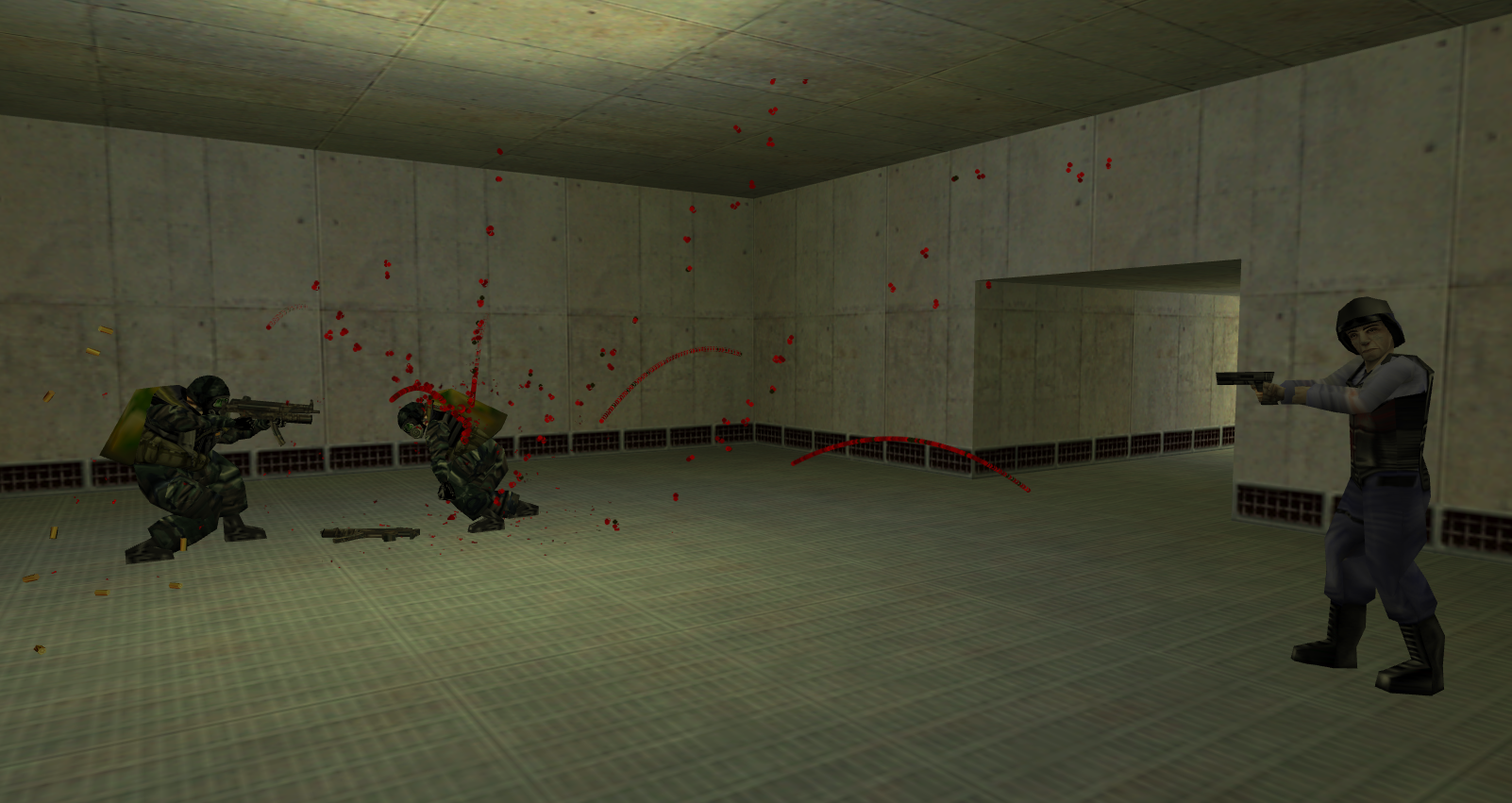 That's it for the new stuff!

I don't know why i'm making this a seperate section because this is gonna be pretty short.

First, the hand textures - i "hosted" a little vote with 4 hand textures to choose from, the one that gets voted the most will be in the mod, and the others will be released later after the mod releases as addons.

Here's a comparison between the old hand texture and the new one that won the vote:

Now, the Desert Eagle improvements! As you might have seen in the Trailer or in the mod's page, i have added a Zoom function to the weapon, of course the weapon is more accurate when zoomed in.

Here's some stuff that i've been planning, also including the planned stuff from the previous Progress Updates.

I'm planning to include the M14 and M16 rifles, ol' pal Krychur has made sounds for the guns so when i implement the guns in the mod, i'll be sure to use the new sounds.

Beretta replacement for the default HL1 glock. The glock will be replaced by a Beretta M9 pistol model and will get its secondary fire removed.

And finally, more fleshed out ally grunts. They are going to be a seperate entity, something like monster_grunt_ally. I'm planning them to be able to follow the player and have more weapons than the standard grunt, they will be able to carry the Desert Eagle, the M14 and the Beretta M9.

That's it for January! HLW has been in full progress mode since October and i've made more progress through these 3 months than in the entirety of 2018 and 2019! If you've seen the trailer - you may have noticed a new release date of May 2021. Now i'm not making any promises, if the mod will not be ready by May, i'm gonna delay it 'till it's done. The Episode 1 demo will most likely come out on February or March.

I hope you liked this look at the progress of HLW and see ya in February!

Don't forget to check out the HLW Discord server: Discord.gg

And also check out the mod's page here: Moddb.com

It is gratifying that the work on this legendary game is not finished. Good luck with.

Please replace the knife sounds. Maybe those from CS will do. Crowbar sounds ruin the experience.
Other than that, this mod is getting better with each update. The civilian models are great. Flying grunts is a neat feature too - I love such small details. Can't wait to play :)

yeah i haven't replaced the knife sounds yet, but they will be replaced by the time Progress Update February comes out! :D anyway, thanks a lot!

Interesting futures but the level design need more work, if you work more on this point it could be a great MOD

what do you mean the level design needs more work? are you talking about the detail? not every mod needs to look like The Core :D i'm still quite a new mapper after all

More complex architecture more unique areas, less square in general with basic textures. Not necessary to be like the Core of course but it's possible to do something better too.

Play other mods or games and take screenshots to have ideas it will help you.

You can either chop up and detail the rock wall and maybe add some dirt on top of it throughout.

Things like that I guess. Don't have time to check out your mod(right now), but try to detail wherever possible and where at low cost. Good luck!

alright thanks for the feedback, i'll try to improve the detail in the maps

I would love to know the process he used to create the HL1 civilians, they turned out excellent.

I can make sounds for the Beretta pistol soon. I am happy to help with this mod.

great, thanks! i'm glad you're happy to help :D