Half-Life: Blue Shift turned 20 and that is a great opportunity to showcase some awesome stuff we were working on. Get ready for some exciting stuff!

Hello all, We hope this article finds you well! The inevitable becomes reality. Time runs just too fast, maybe, but that´s right, Half-Life: Blue Shift turns 20 years old today. Truly this is a big deal for us and our fans.

Besides the stream with our peers working on the Raising the Bar: Redux team, we of course cannot miss this opportunity to showcase what we have had in the oven past few months. Are you ready? Because this one is really expansive! 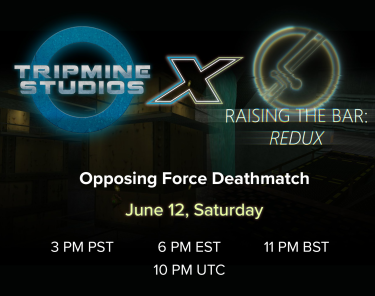 Of course, we cannot miss this opportunity to showcase what we have had cooking in the oven for the past few months. Are you ready? Because this one is really expansive! Before we start, a quick note: Uniquely for this update, we are presenting the content in two forms: an article and a video.

This article is going to get straight to the point in showcasing what we’ve been developing the past few months. Besides that, expect a special video within a few hours on our YouTube channel that will show this same content while additionally providing a timeline of how we got to where we are today, and what things look like moving forward. If that sounds like something right up your alley, we will of course publish when it is live on our social platforms and discord so be sure to check it out…once you're done reading here of course! Alright, we said we would get straight to the point, so on with our update!

This update is all about showcasing new tech we’ve been developing for our engine, and how we’re utilizing it. The first reveal in our fairly long list is that we’ve enhanced the core architecture of our Source and Hammer to be running fully 64-bit. This means…

Sadly, there is no fancy image to go alongside this reveal as it is mostly tech changes under the hood. So, instead, how about we show you what our Black Mesa Security Guard and Marine models look like! Note these images are not pre-rendered. What you are seeing is being rendered real-time in our version of Source.

So, you may have noticed those screenshots looked a bit higher in quality than what you’d find if you loaded up Source right now. Well, part of the reason why is our overhauled renderer. Our engine now features full PBR (Physically Based Rendering) support for models and brushes. 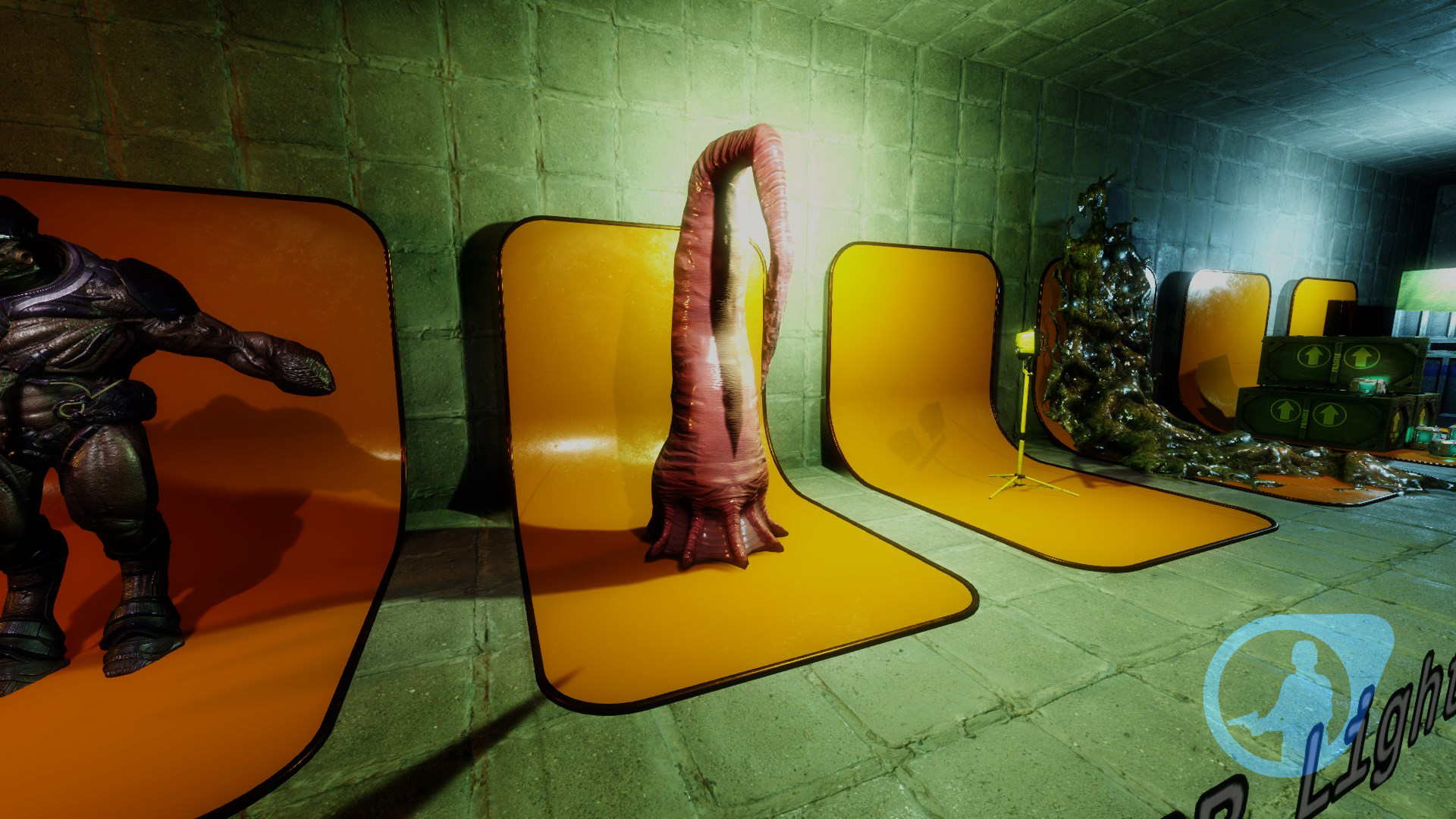 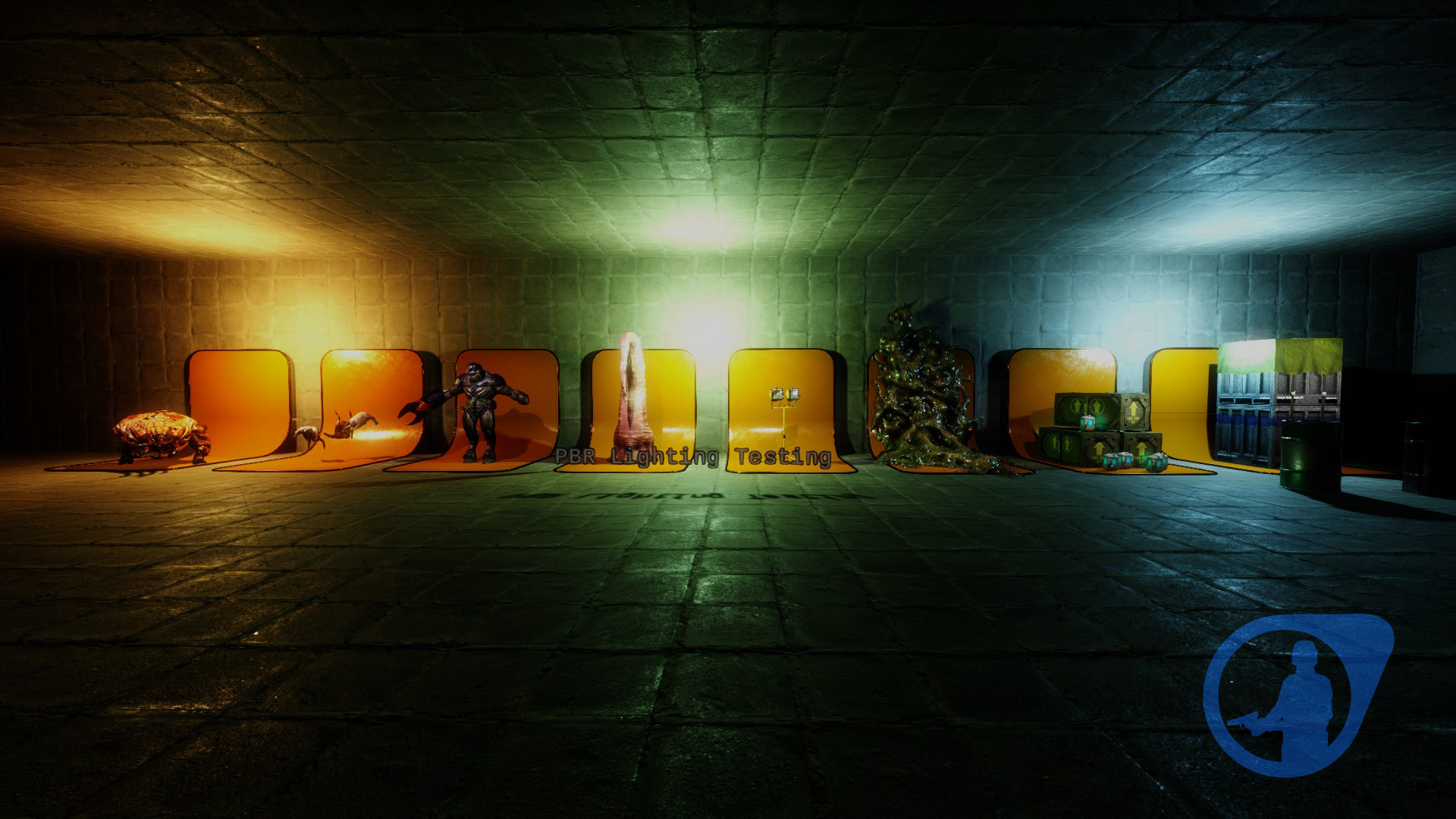 PBR is a modern rendering technique that allows for a far more natural flow of light in space. PBR texturing is also a far more approachable pipeline to modern digital artists. Overall, this is a huge win for the quality of our textures and the ease of content creation. 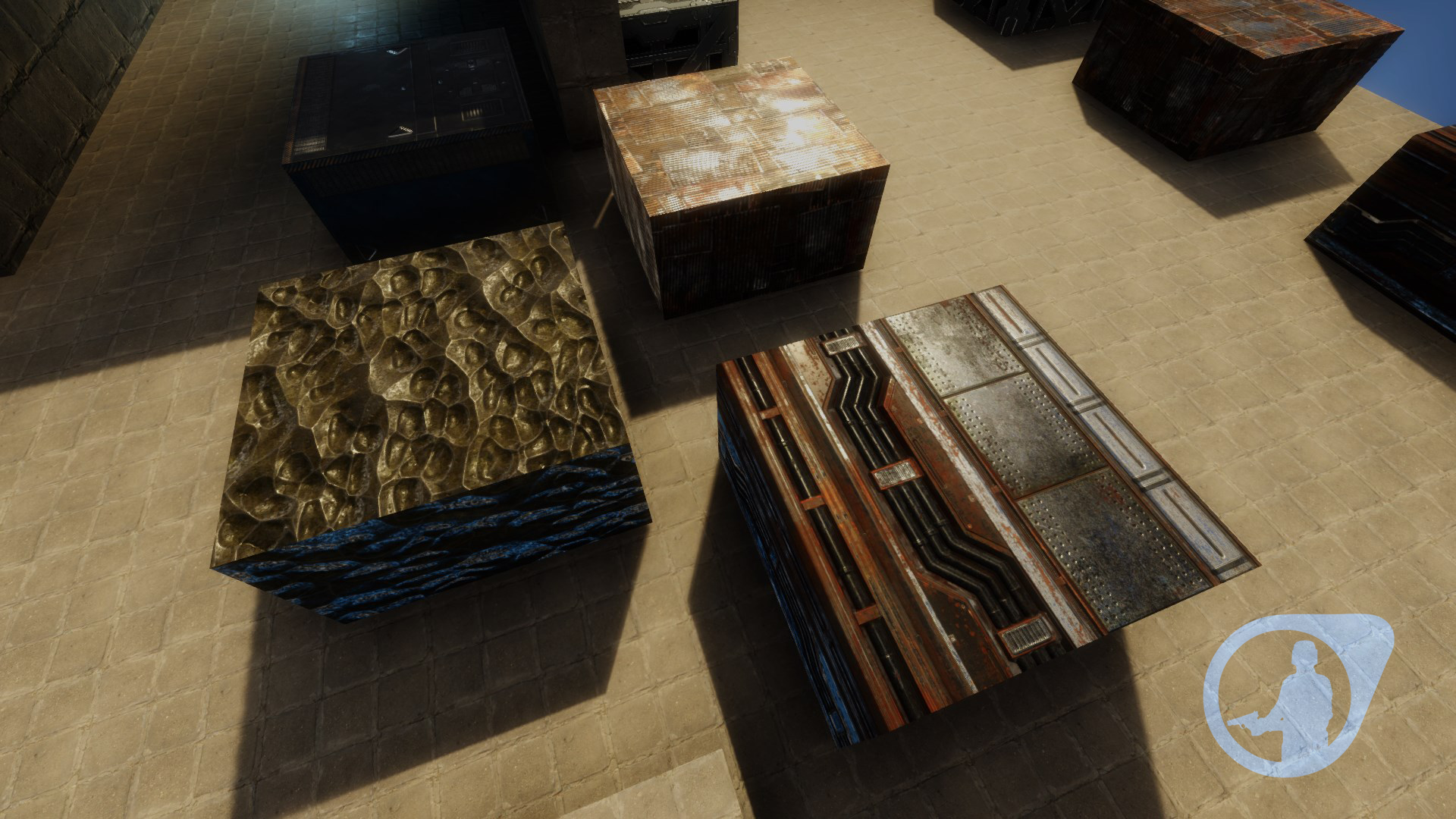 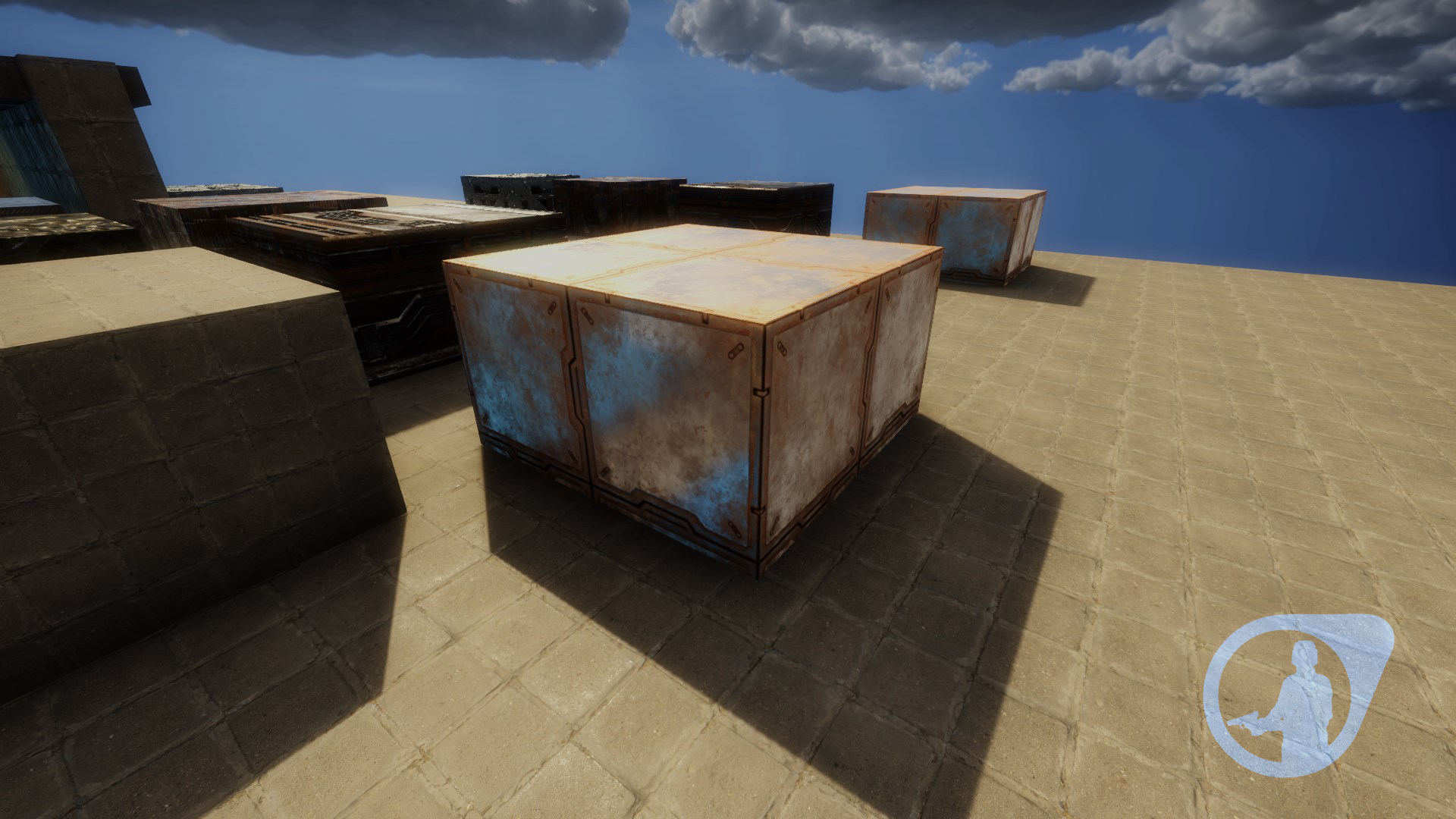 Our next engine improvement is a big one. Alongside Source’s static lighting solution, we have added an entirely new deferred light renderer on top of it. This means we are now capable of having hundreds of dynamic lights in a scene with very little performance cost. Currently we are supporting both point and spot lights. We are capable of expanding this selection if deemed necessary by environment artists.

Not only are these lights dynamic, meaning they can move and spin however the environment artists likes, but they are also capable of casting shadows on props as well as world geometry. Compared to Source's default lighting, which can only render shadows on world geometry. This goes a long way in making the space you traverse feel a lot more believable.

Our deferred lighting system also supports texture projection. This means for example, if there are bars around a light source, you can enable specialized textures (cookies) which add in these fine details to the shadows the light projects. This technique improves performance, as well as enhances the believability of the scene.

A system we have just started on which will also greatly improve the look of our environments is screen space reflections support. Screen space reflections is a technique used to create more accurate, and in some ways a bit more detailed, well…reflections! It works particularly well in improving how reflections look on water, metal, and other naturally shiny surfaces. Take a look below to see a before and after comparison! 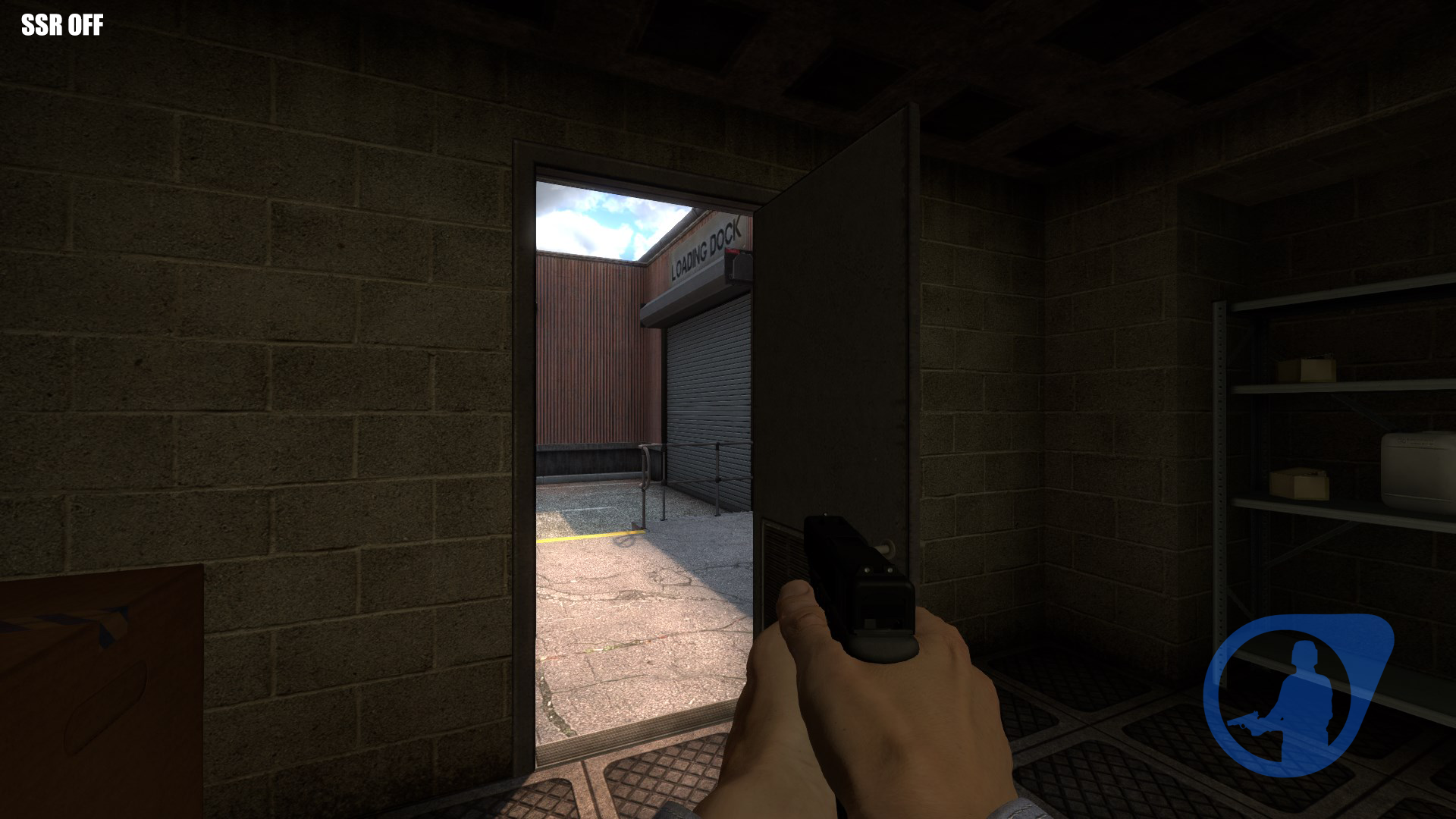 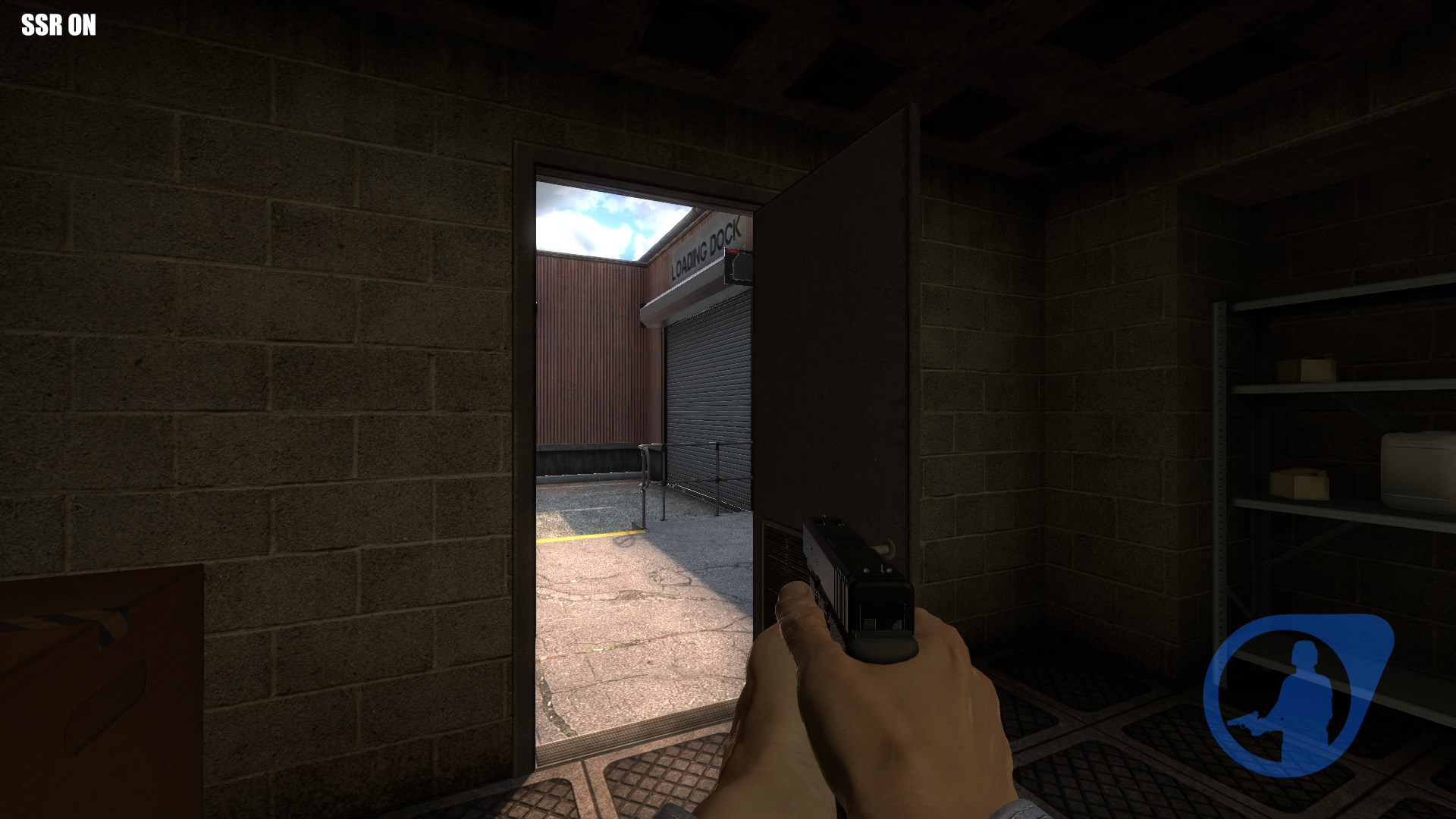 Complementing our new lighting system, we have added the ability for local lights, as well as the sun, to emit volumetric lighting (also known as godrays). This is useful to emphasize how bright a light is in a dark environment, or just add some visual flare and drama.

Another addition to our engine’s enhanced lighting capabilities, we now support lens flares which can be created at a point defined in space, or from the sun itself. Like volumetric lighting, lens flares are a great way to show a player how bright a light source is. From a design standpoint, lens flares can also be used to guide a player towards an exit in a very dark space, or blind a player when looking at a very bright light source.

Chromatic aberration is a type of post processing effect that scatters light to create an odd, somewhat otherworldly look. This was a must-have system considering the Xen segments players explore in both Guard Duty and Operation: Black Mesa. The thing with post-processing techniques is you need to think of them like garlic when cooking. A little is good, but too much can ruin the dish. Below you can see a screenshot of how this subtle light-altering effect enhances the scene when you approach a Xen Portal, when combined with color correction.

If you’ve been reading carefully and not just skimming (tsk, tsk!) then you may have sensed this was coming. When developing our new lighting and rendering systems, we have also made improvements to Source’s HDR rendering. Our significantly improved bloom functionality allows certain key parts in gameplay to really stand out! Just take a look at this Houndeye’s stripes right before a shockwave is about to be sent your way!

We have one last engine addition to showcase for now: volume fog. Volume fog allows designers and environment artists to place trigger boxes in maps which create areas of low visibility. This is particularly useful for underwater segments, cold environments, and hostile alien spaces.

To close out this update, we are very pleased to show you a gallery of additional in-game videos, as well as some screenshots of some never-before-seen models that are quite core to gameplay. Take a look! 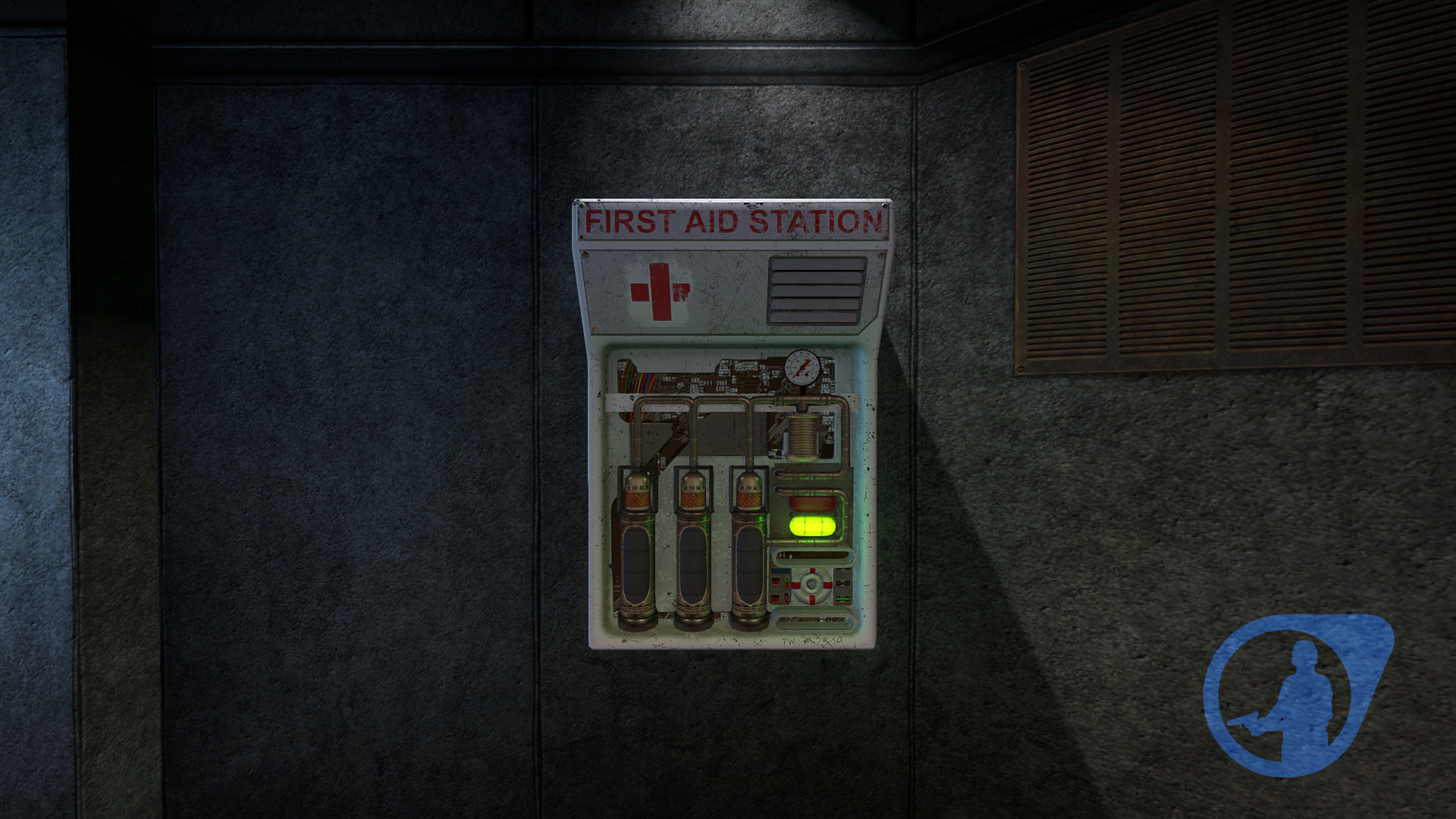 And…whew! That was quite a lot to show this time! We look forward to sharing more news with you all in the future. There’s some exciting stuff cooking behind the scenes that may just be revealed in the not-so-distant future. Watch the space…

Cheers and wishing you all well,

Man I'm always so happy to hear news about you guys, and everytime you have so much to show and amaze me with !

The Canal levels look amazing! I really like the updated but still familiar design of the Alien grunts, plus the older health stations & PCV chargers look fantastic.

- Will any of the gas mask grunts get green lenses? Or white camouflaged helmets in addition to the green/woodland pattern?

- I'm not sure if it's WIP or just a limitation of Source: the Houndeye shadows change from a full body shadow to just their three legs whilst moving in the Canal 1B video

- The PCV charger says "Property of US Army", are the HECU Army or Marines ingame? Half Life isn't realistic in the slightest so I don't mind whatever interpretation you go with, but I just loved how in OP4, the "Marines" in OP4 constantly referred to themselves as "soldiers", called for Medics instead of corpsmen, and used Apaches & Bradley APCs instead of Cobras & LAVs :p

Interesting, Xen Trees and other flora will be destroyable?

Looks awesome! Thanks for all our effors put in this mod. Take your time as much as you need. Patiently awaiting for the release.

Suggestion for Canal1 vid sequence: Add some decals onto the walls. Idk Alien Blood or Bullsquid splatter to make it look more interesting and portraying the very hell that's happening in Black Mesa right about now.

Minor idea to canal1 lab. Place the computer console stations deeper into the acid. Carve them diagonal downwards the acid and place em deeper into it. After all it's acid and that usually eats up everything. Let the player feel the danger that surrounds this acid.

Extremely impressive. Playing through the entire remade Half-Life 1 trilogy will be unbelievably sweet

Man you guys are really good! I wasn't sure you would deliver an OF/BS source remasters on par with Black Mesa, but now I don't have to worry anymore. You're more than capable :)

I am sooo looking forward to this :-)

It's glad to see that you are continuing this mod, and your Twitch recording is nostalgic and interesting. But only play with official maps maybe a little bit boring. I recommend some fantastic fan-made maps on Gamefront.com & Gamefront.com

I don't know what to tell you, man. But first things first, I gotta say...I've never expected that kind of imagination beyond what was expected to be released. I mean, when it's all about Half-Life's Remake back then...people were expecting a big change up for that day's standards...and they definitely got that in the end. But you know, I did stopped thinking after I realized that this is gonna be another upgraded game where it gets revived to this day [in general]. The more and the more time passes, I keep asking myself what if it's just another way or version of Black Mesa or so on. Then, you keep changing things up...adding more variety what this game has/had...creating super cool stuffs that we mostly see today's big company games and so on [believe me I'm not even exaggerating while I'm telling you this] This is some next level, man. After I saw Guard and Soldier models, it's all done for me. I literally have no doubts let alone questions that this is a game people are gonna remember for another 10 years or so. Masterpiece.

I'm a month late, but i'm just glad this is still being worked on.

could this be too much?

11 years later and still nothing to show