Hi, everyone. In Update V3.2, we’ve got the first fruits of our modeller’s labours to show, new animations to go with our freshly-made weapon models, and also some substantial map progress to show. We’re proud to present what we consider one of our best updates yet. 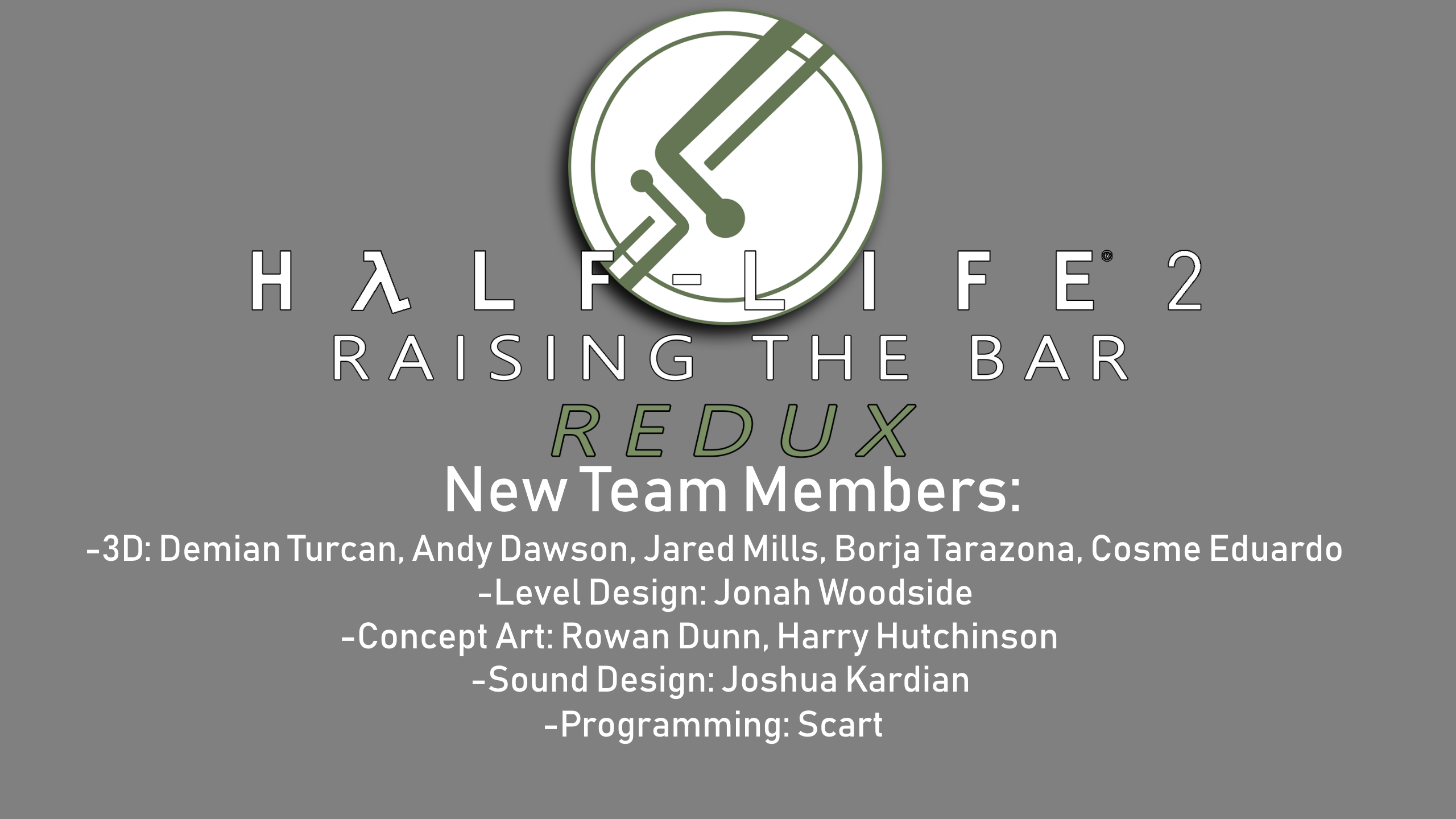 We’ve taken on a huge influx of people since the last update, all of which have already gone to work on the mod. In 3D, we’ve taken on Cosme Eduardo, Jared Mills, Borja Tarazona, and Demian Turcan for hard-surface work (like props and weapons), and Andy Dawson for creature design. We’ve also taken on Rowan Dunn and Harry Hutchinson in the concept art department, Jonah Woodside for level design, and Joshua Kardian for sound design. ADDENDUM: An oversight missed out this team member’s contributions to the project so far, but Scart has also joined Raising the Bar: Redux as a programmer, and has already gotten to work fixing some of our biggest issues. Some of these new people’s work is being showcased in this update; some others’ work isn’t quite ready for public showing yet, but it most likely will be by December 1st. 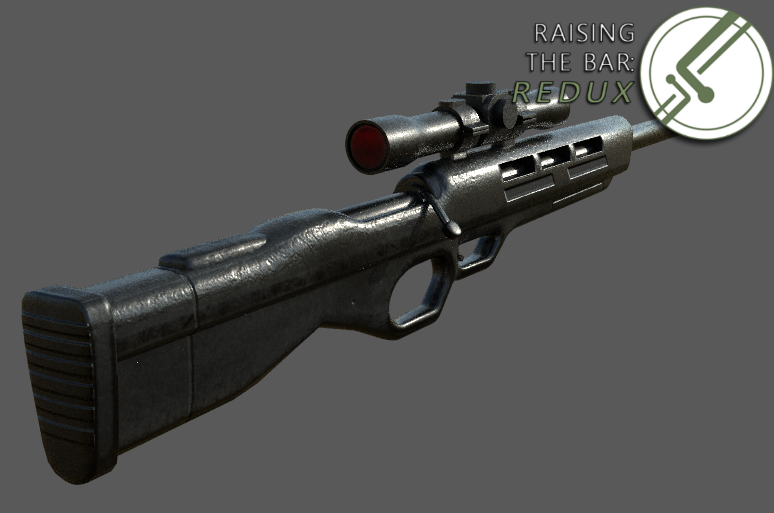 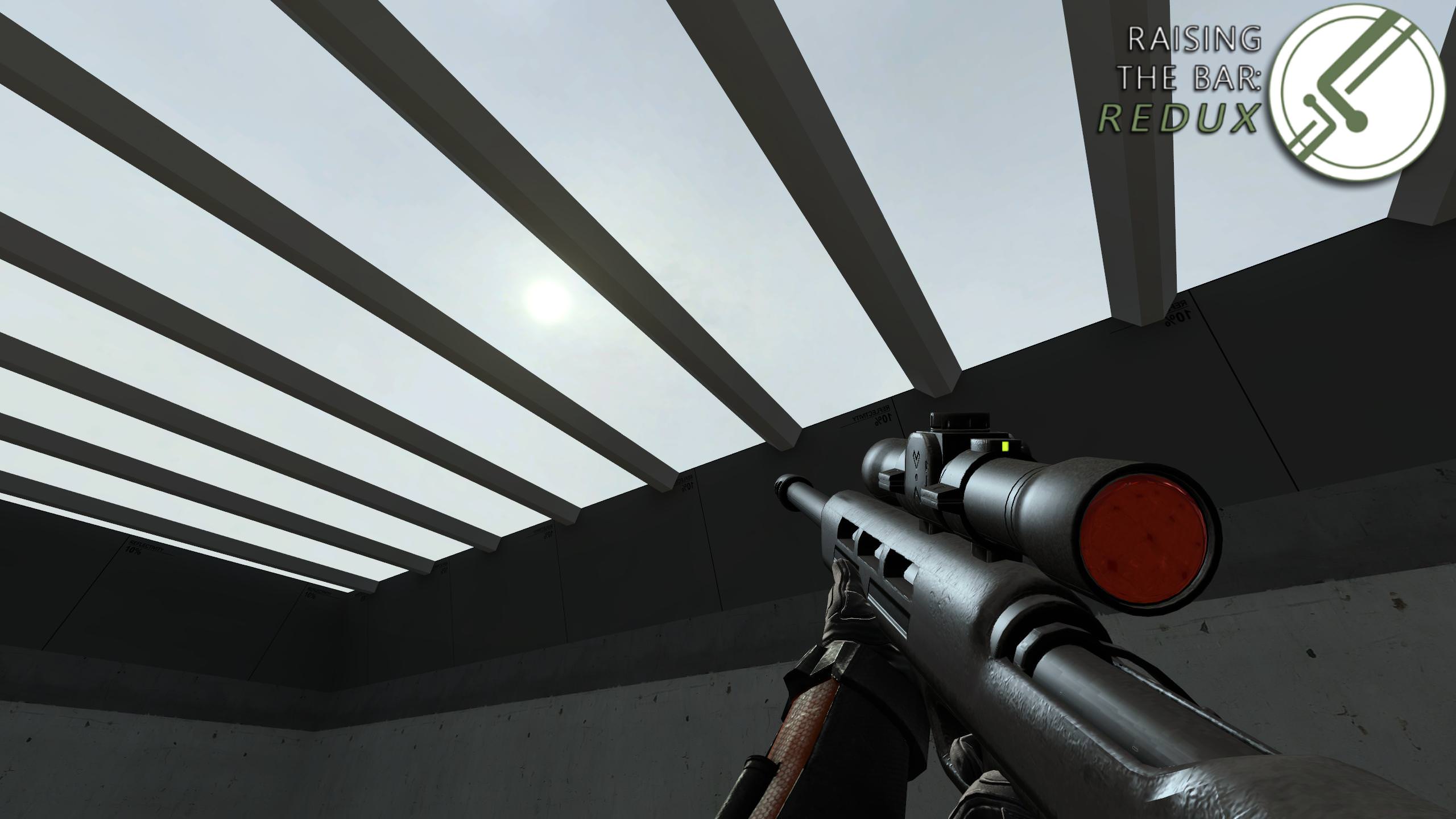 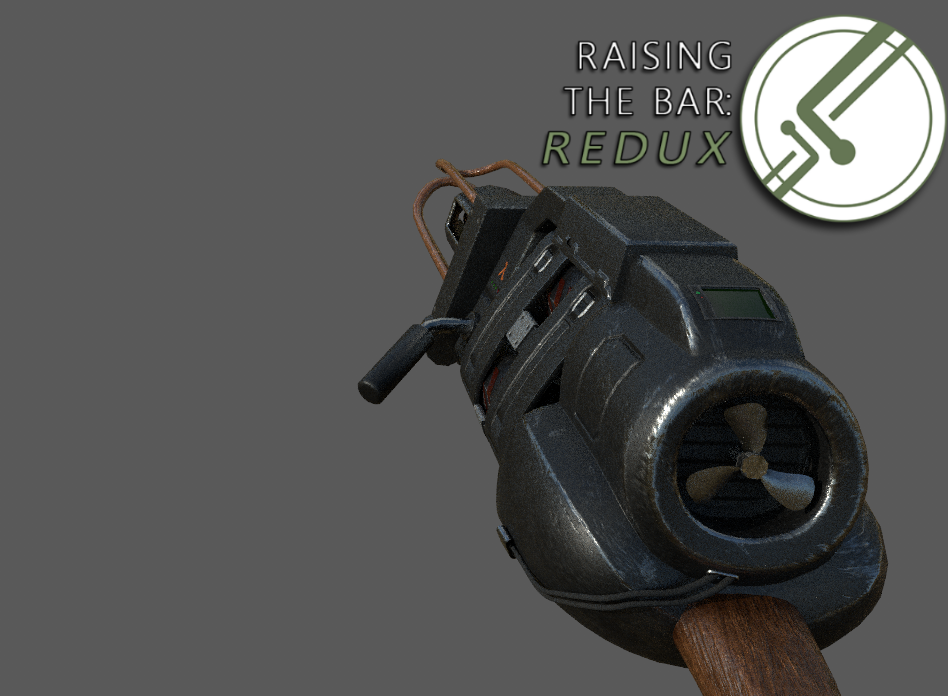 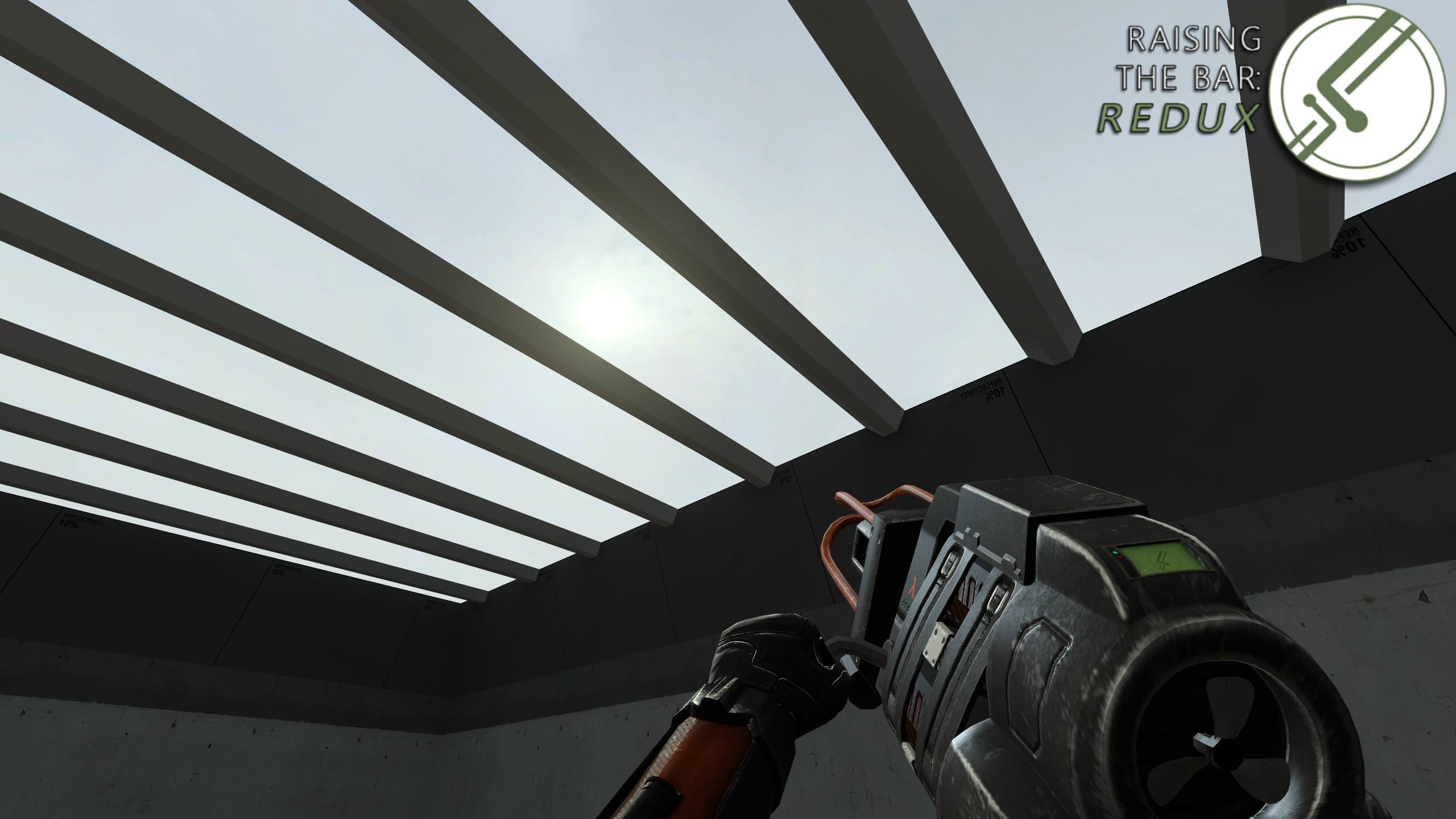 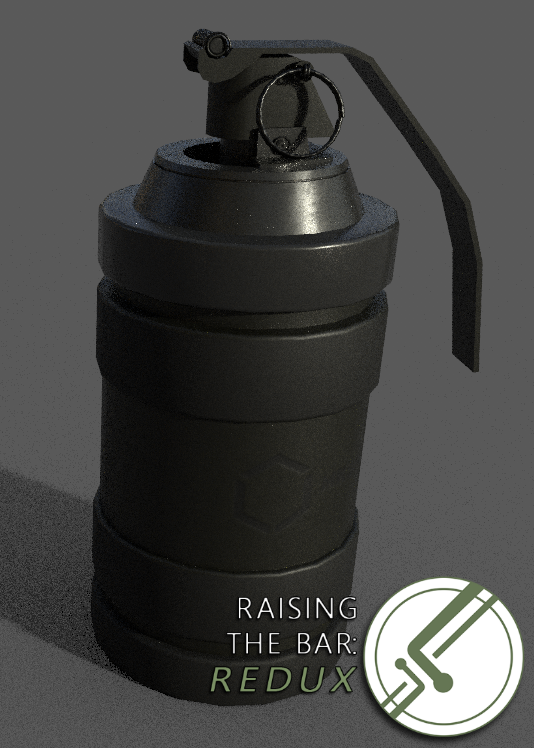 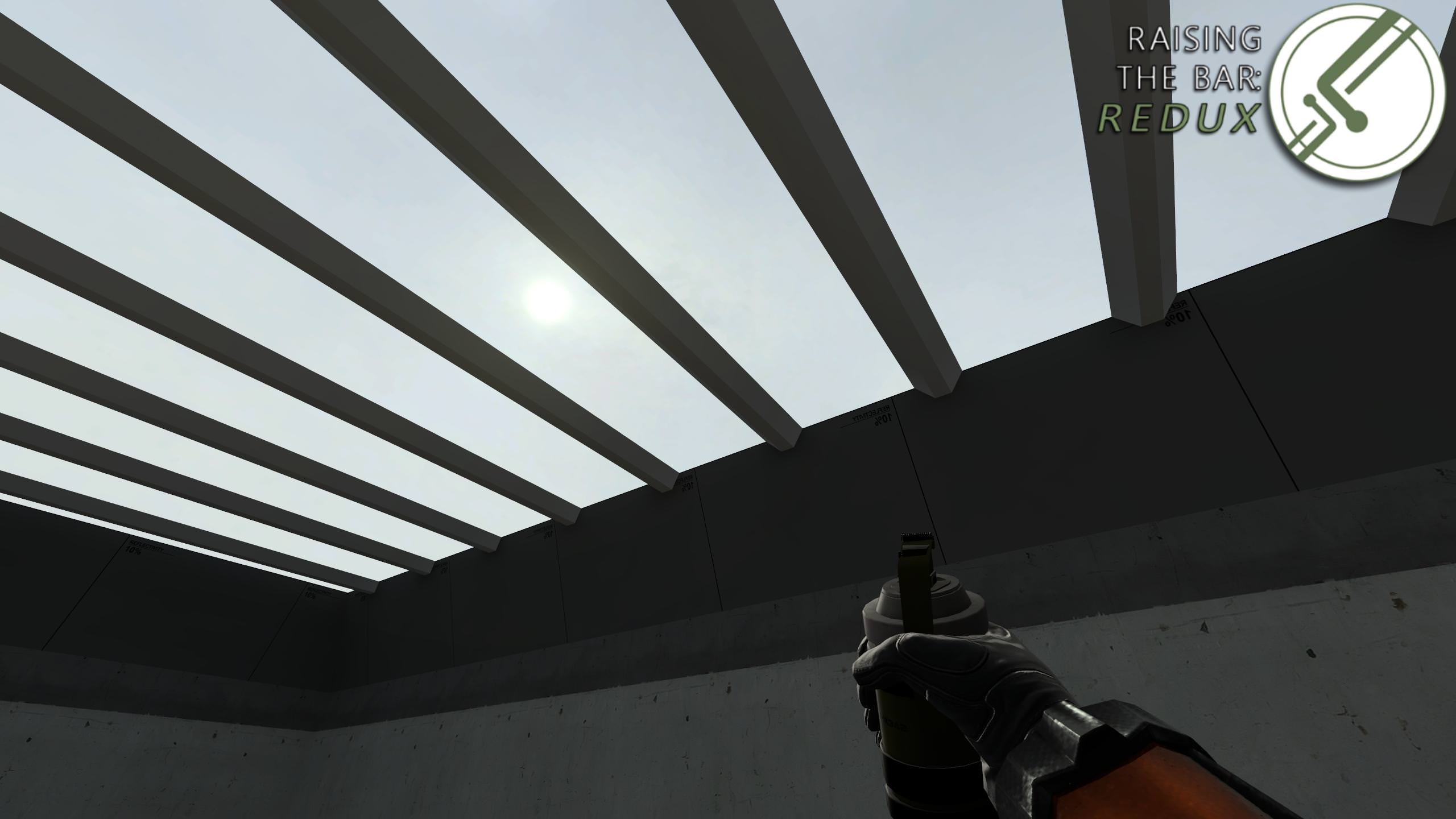 First-off in the long list of excellent model work Cosme, one of our new modellers, has done, we’ve got the weapon models for the Tau Cannon, the Sniper Rifle, and the Grenade. Cosme modelled and textured these three models entirely from scratch, and, as you can see in both the renders and in-game shots, it’s hard to argue with his results. The Tau Cannon and Sniper Rifle were two sub-par weapon models we were always sceptical about how we’d go about replacing, but with a talented modeller like Cosme onboard, those concerns were wiped away. The grenade’s new coat of paint is also very nice, and it helps us round off the improved look of our arsenal. 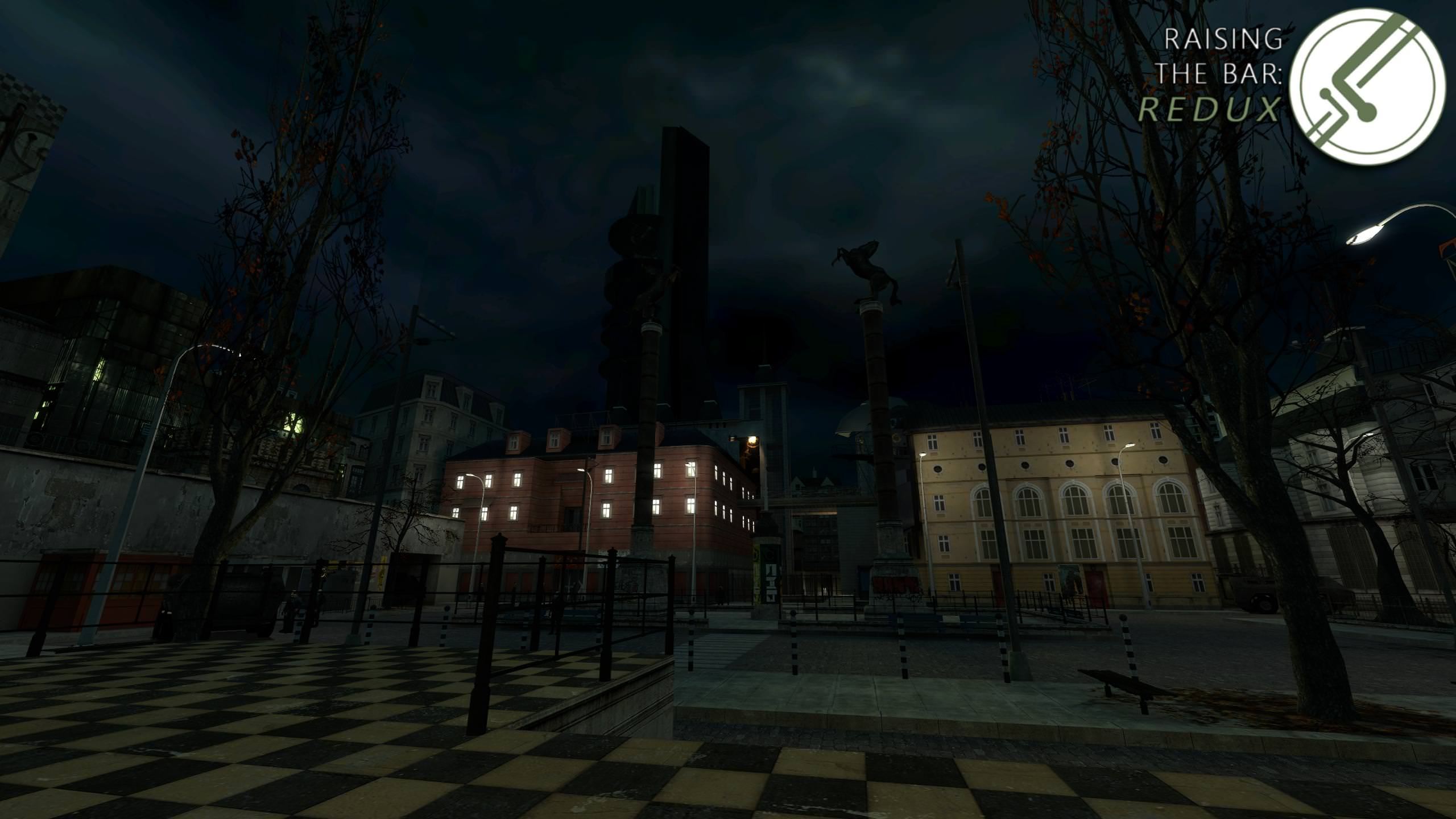 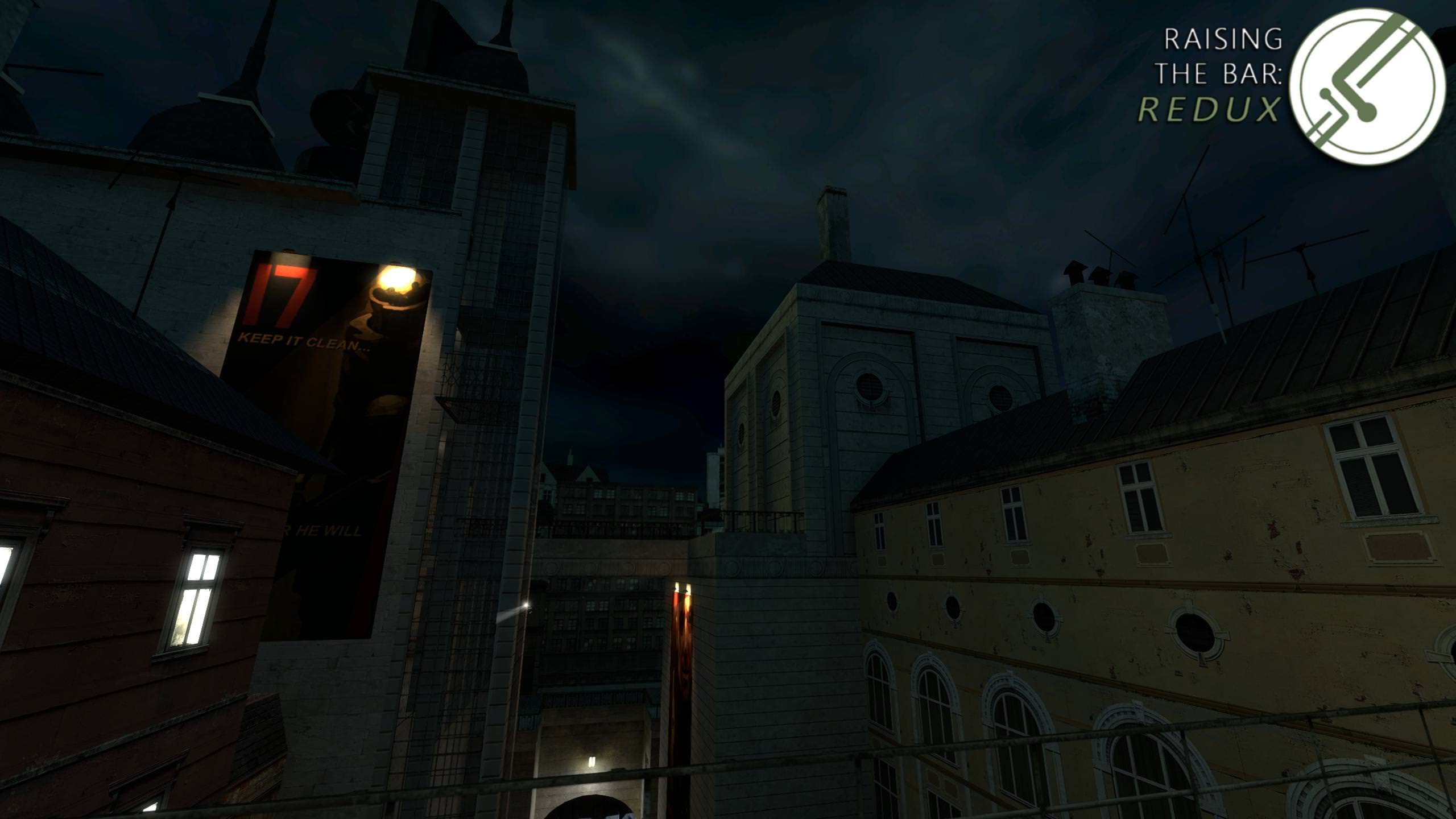 As many chapter one maps approach completion, we’ve begun conducting art passes on older maps, bringing them up to a higher standard of quality in preparation for chapter one’s total completion. For the terminal plaza, this has involved standardization with our placeholder citadel (which will be replaced, but for now, is simply a matter of consistency), as well as the same base skybox as a number of other maps. We’ve also begun adding extra details around the map, such as the posters, more complicated brushwork to buildings, and more background buildings for better detail. Smaller fixes not visible here – like fixing problematic nodraws, making combine soldiers parading through the map hold OICWs, and the like – have also taken place. 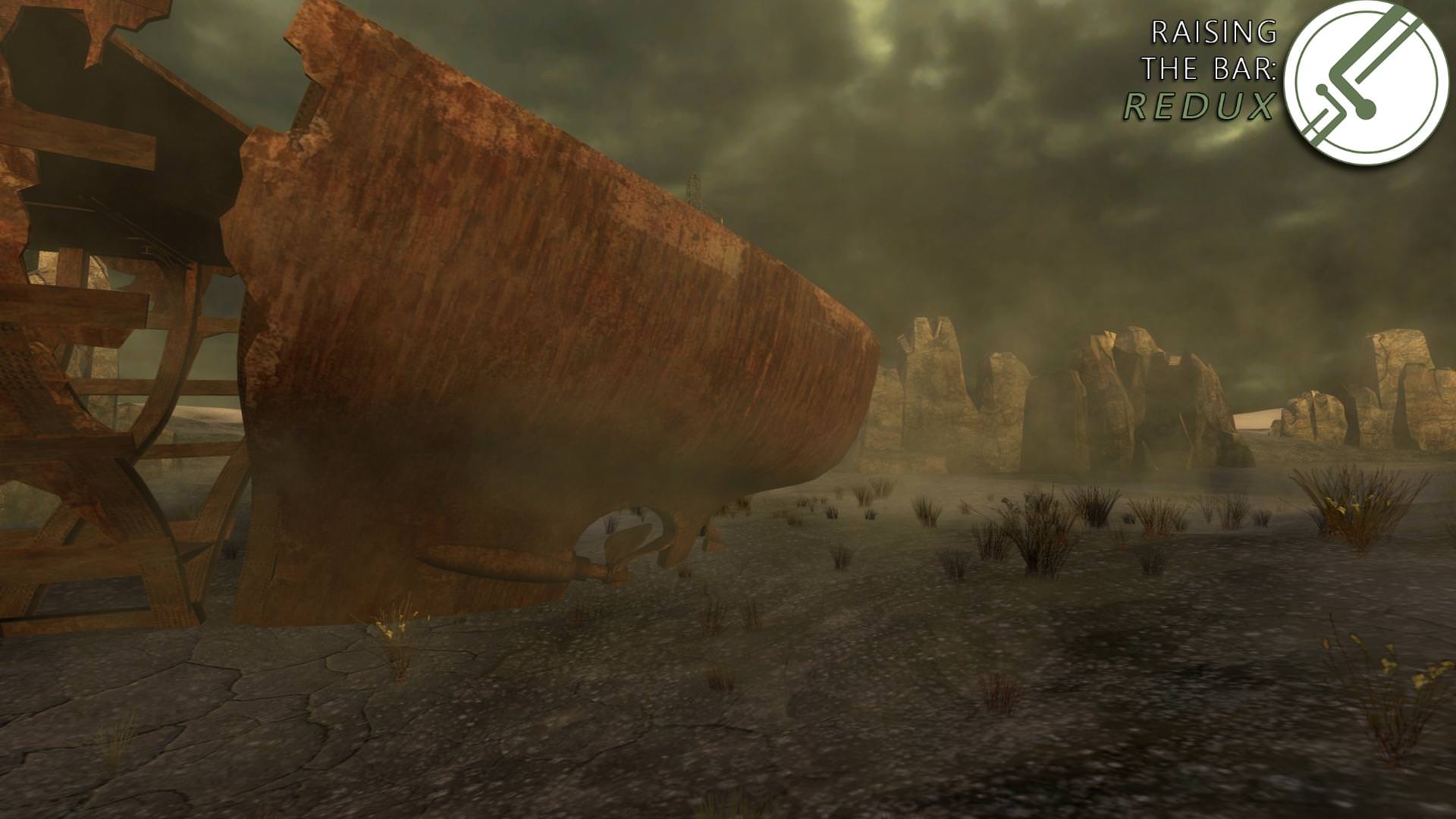 GameSmert, in charge of our narrative maps more often than not, has made significant progress with Lab02. For the teleporter sequence, he’s gone to work creating a good-looking wasteland environment that will be one of many distinct environments the player finds themselves thrust into during the teleporter mishap sequence. 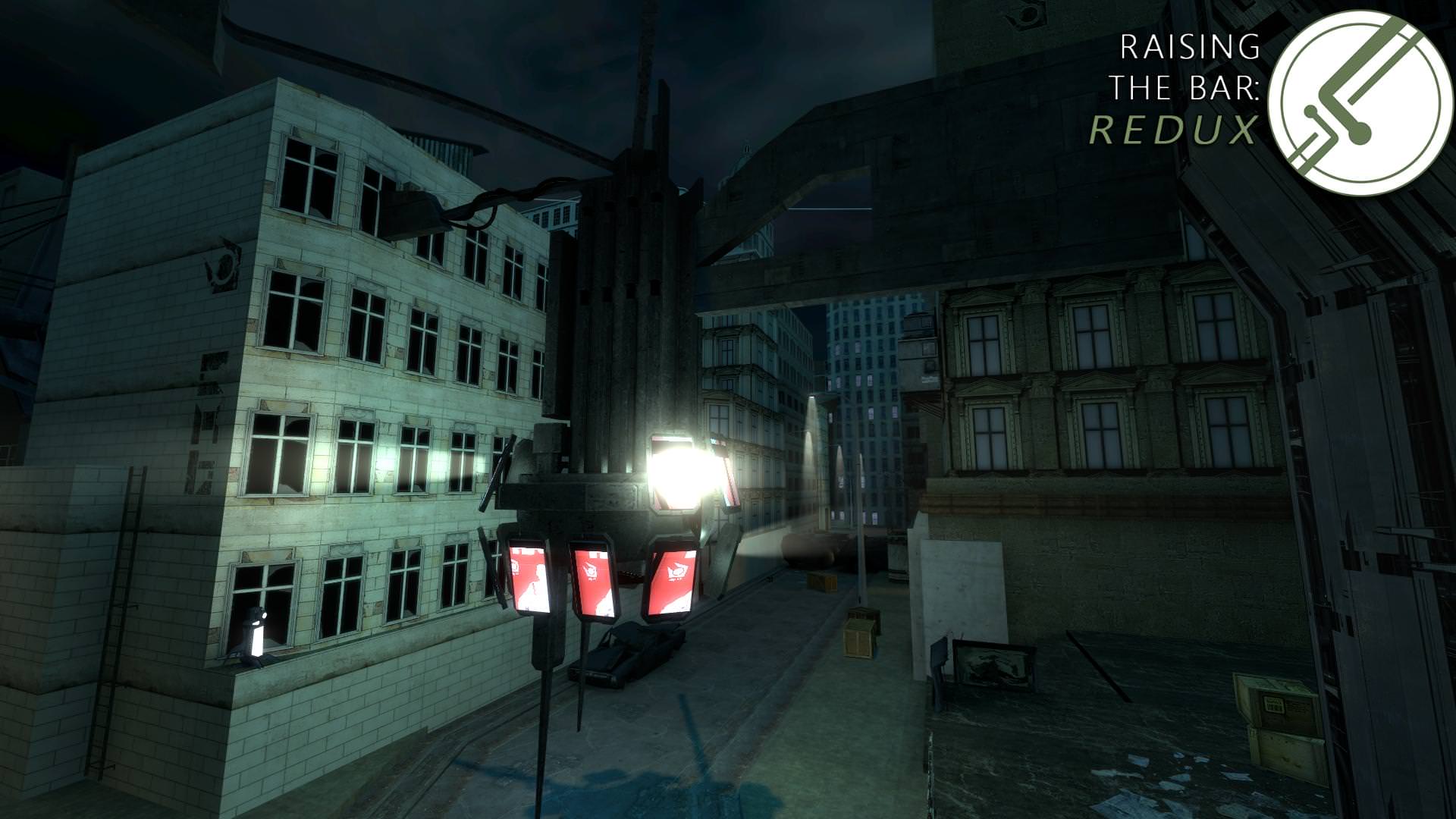 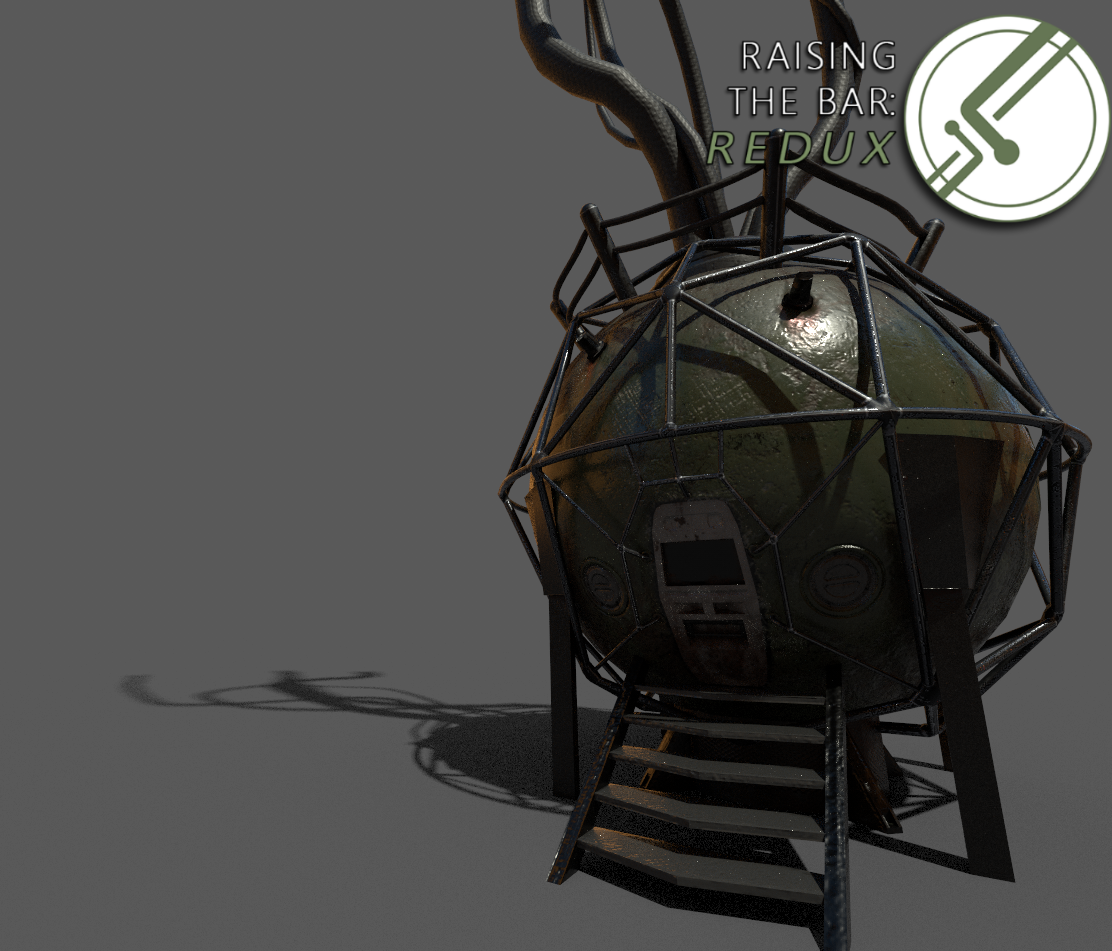 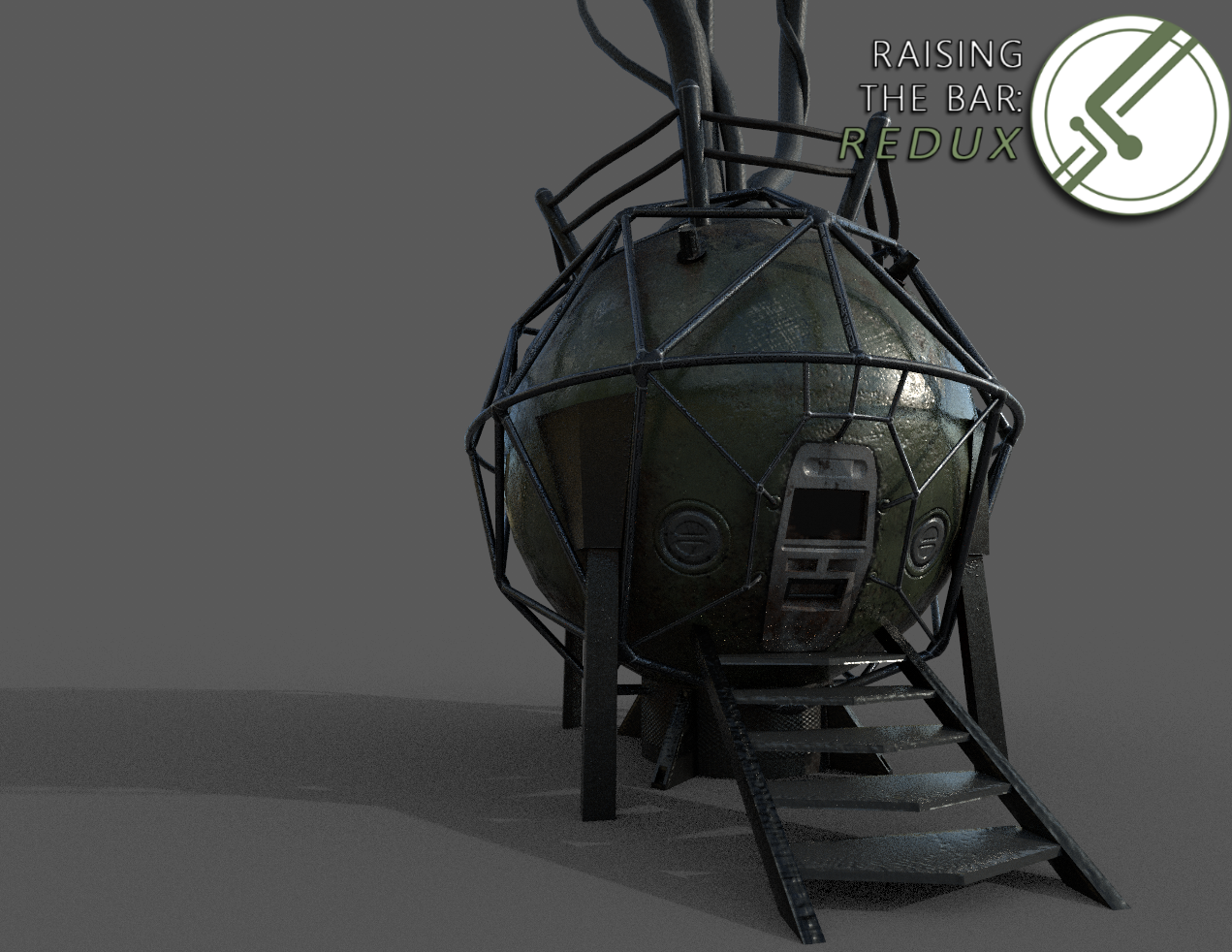 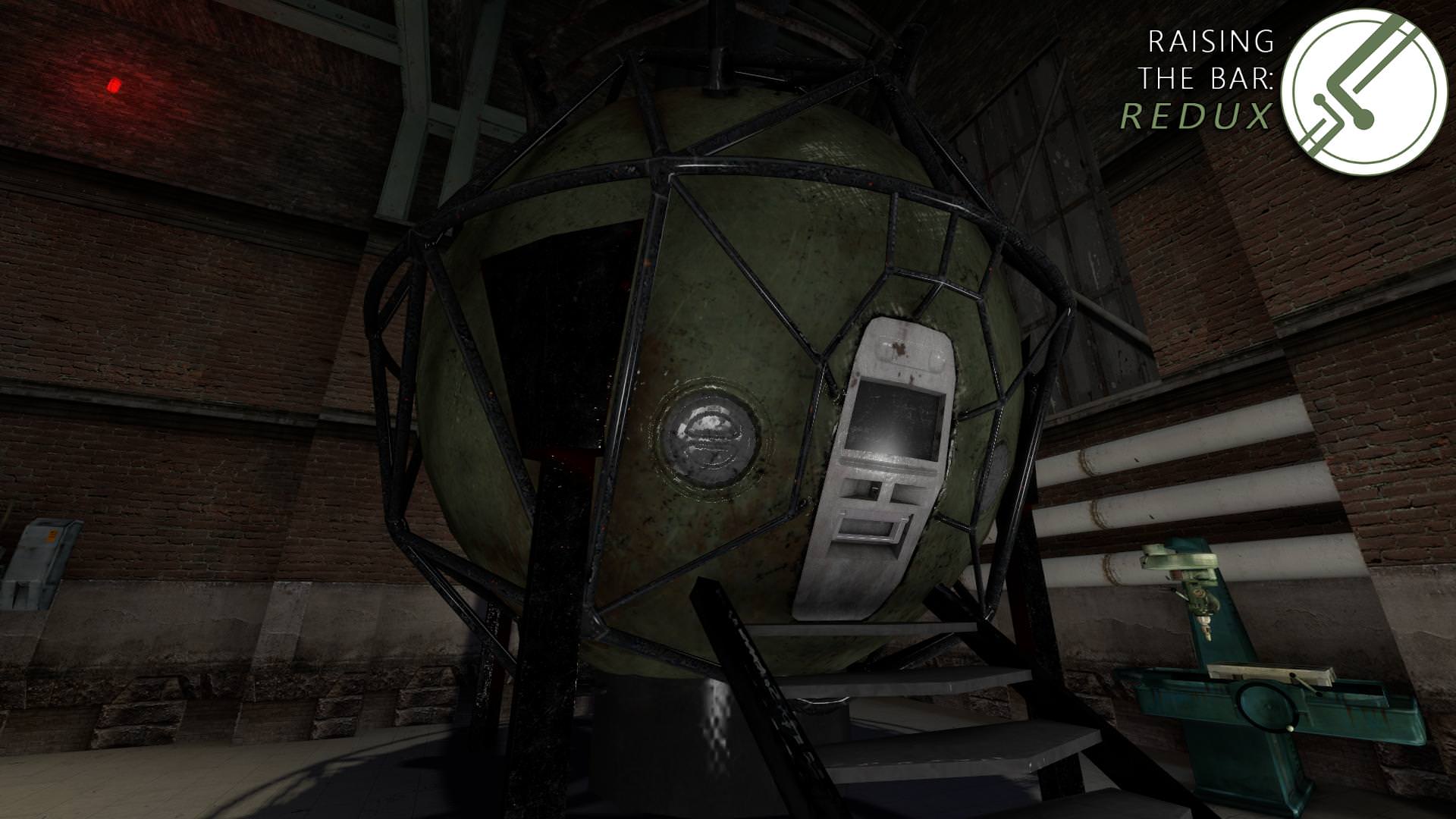 Having discussed Lab02, now seems like a good time to draw attention to Cosme’s other models – specifically, map specific props like the consul pod (seen in concept art of the Breencast) and the teleporter (also seen in concept art, this time for Kleiner’s lab). Having dedicated modellers allows us to pursue avenues of design we might not otherwise have been able to before. These options will allow us to populate our maps with better details and make better use of our subject matter. 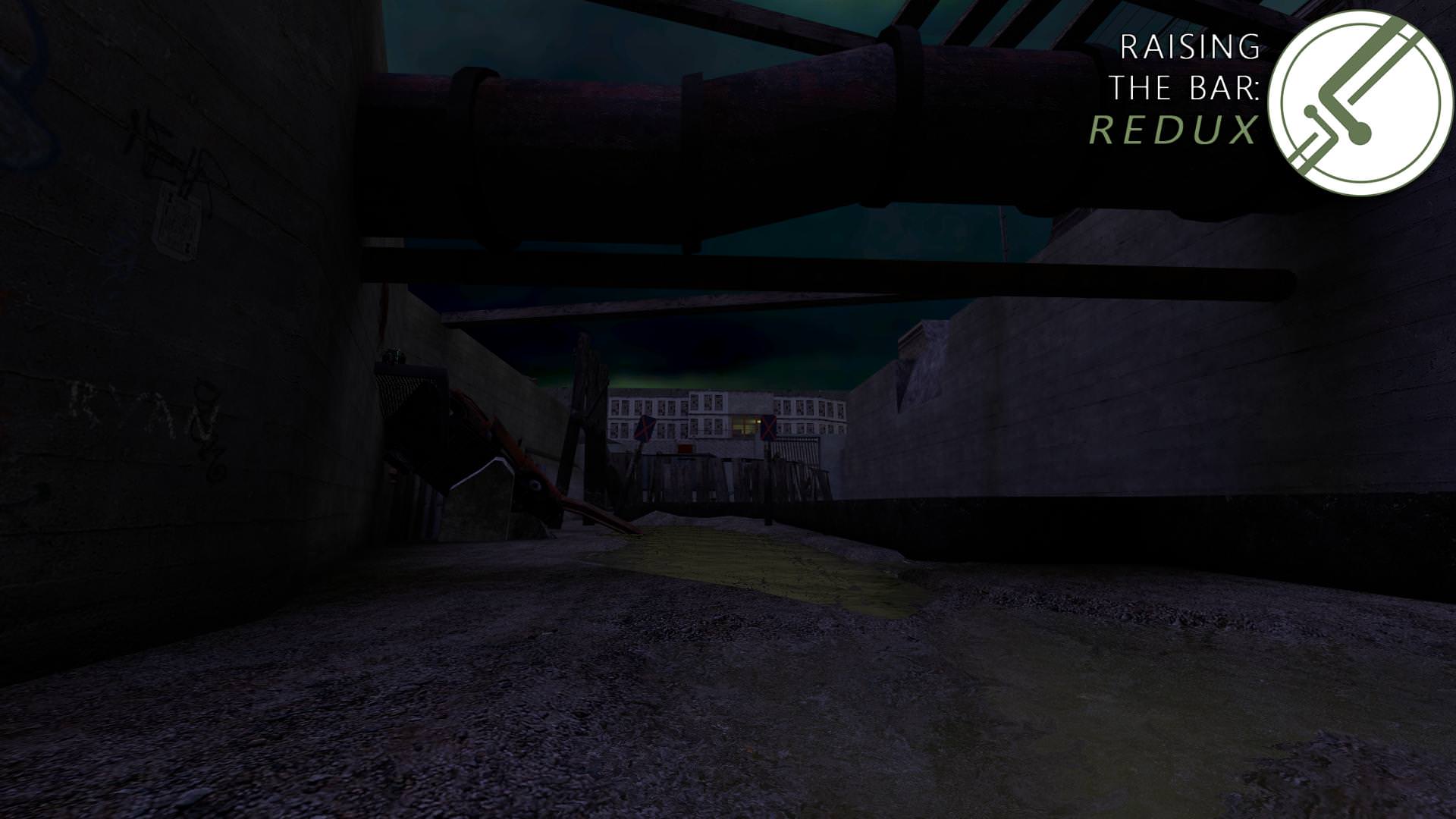 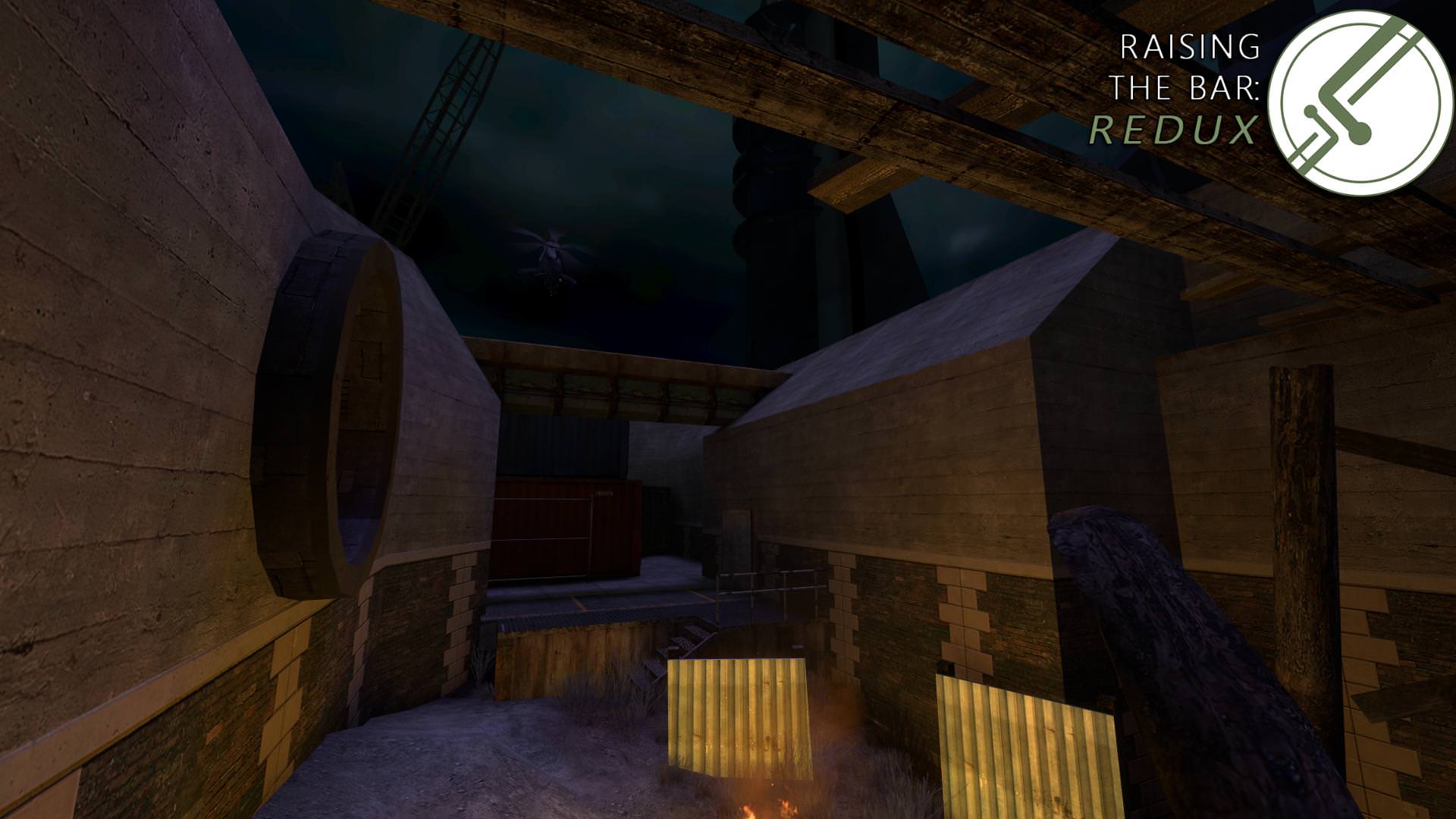 Honza has been continuing on the inner canals, adding extra details to it and helping to ensure we have a solid basis to build off of when we commit to chapter two fully in the level design department. The map still has a long way to go, but good pre-planning and groundwork will allow us to transition to a chapter two creation workflow more easily when the time comes. 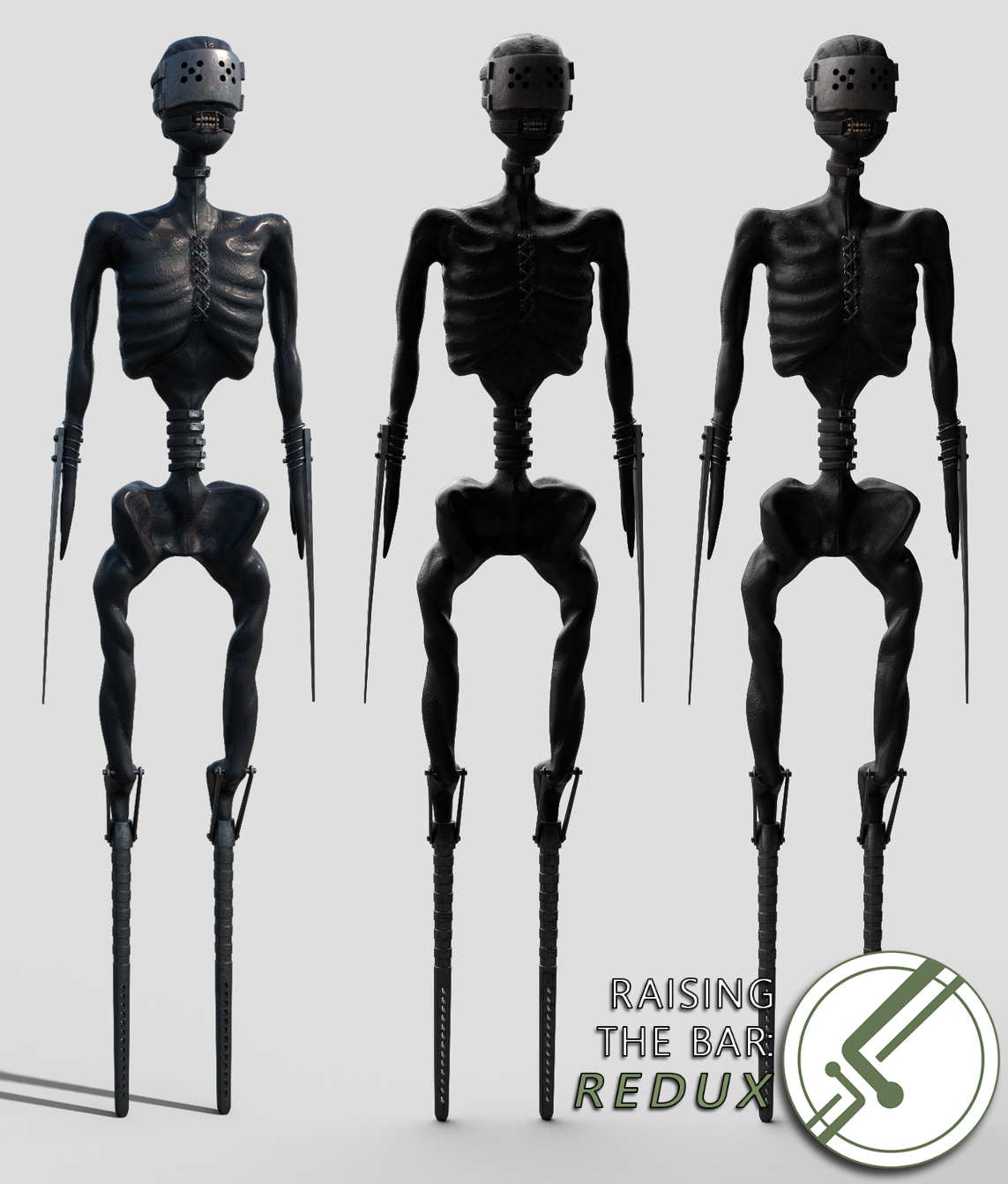 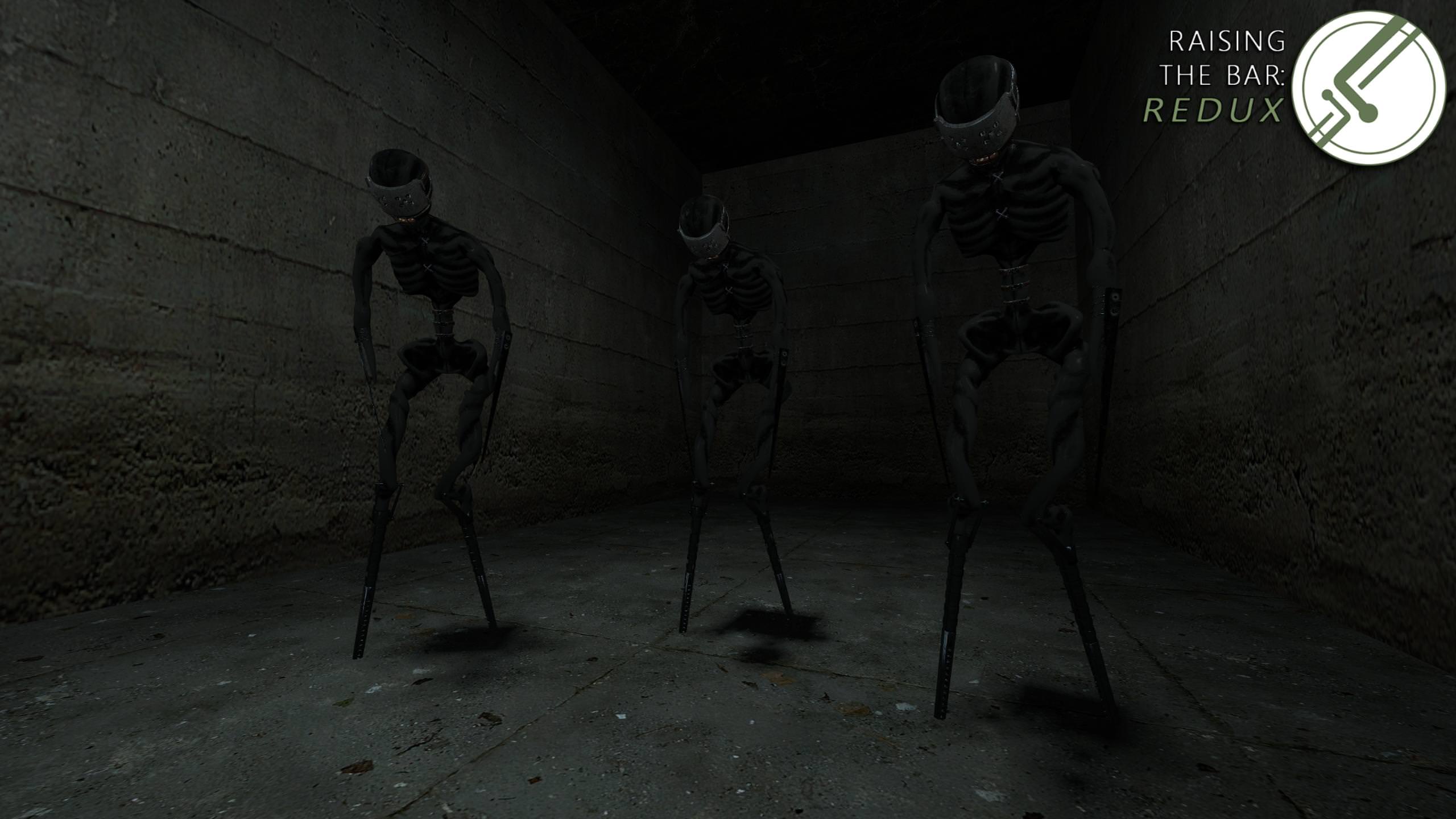 Next, we’d like to showcase another one of Cosme’s models we’ve gotten in-game – his Stalker model. He did this model before joining the team for his portfolio, but he graciously allowed us to use it, in addition to his other work, in the mod. As you can see, it borrows heavy influence from early stalker designs, ones seen only in concept art, and our implementation ingame, whilst rough at first, was very rewarding when complete. 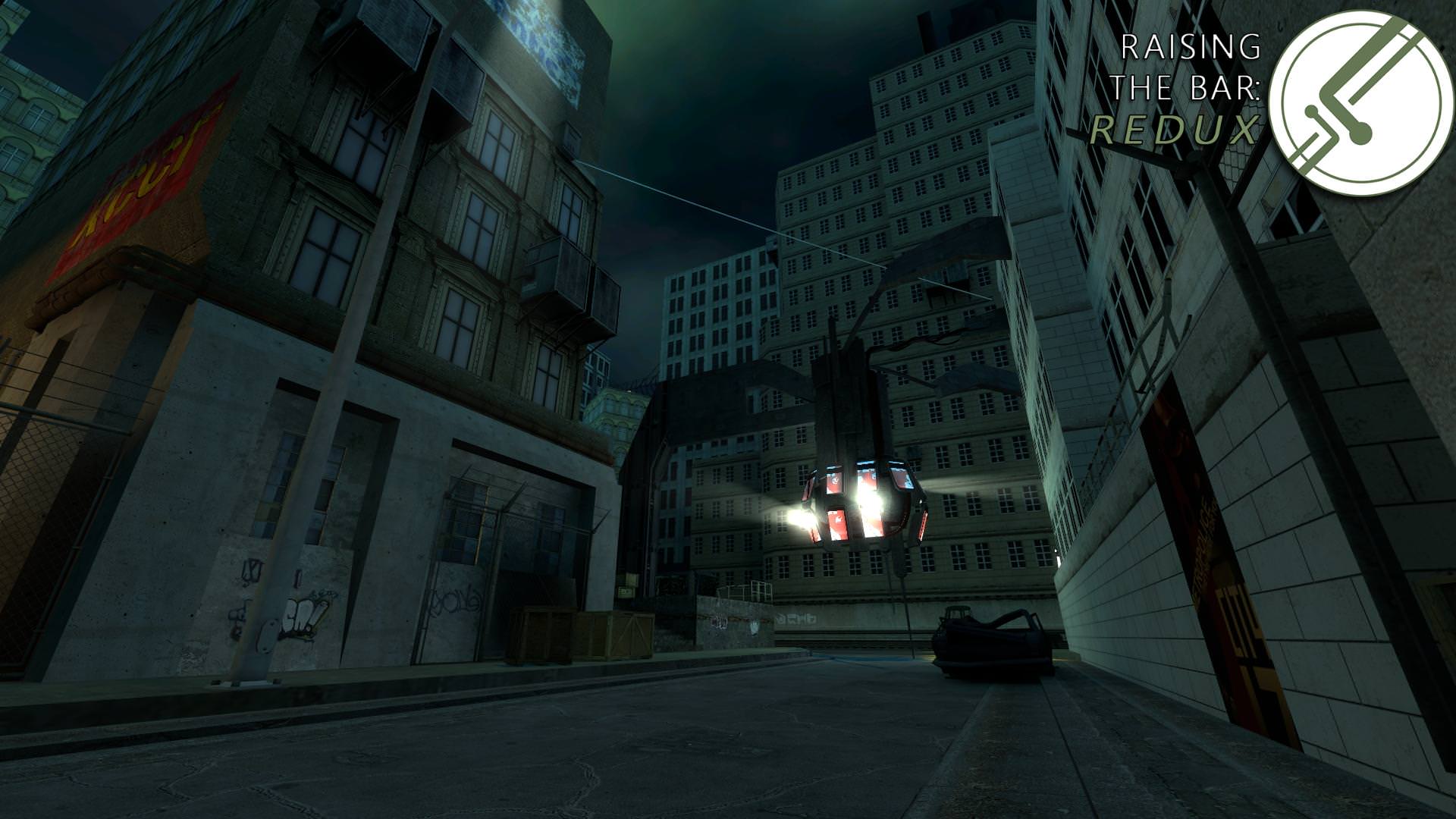 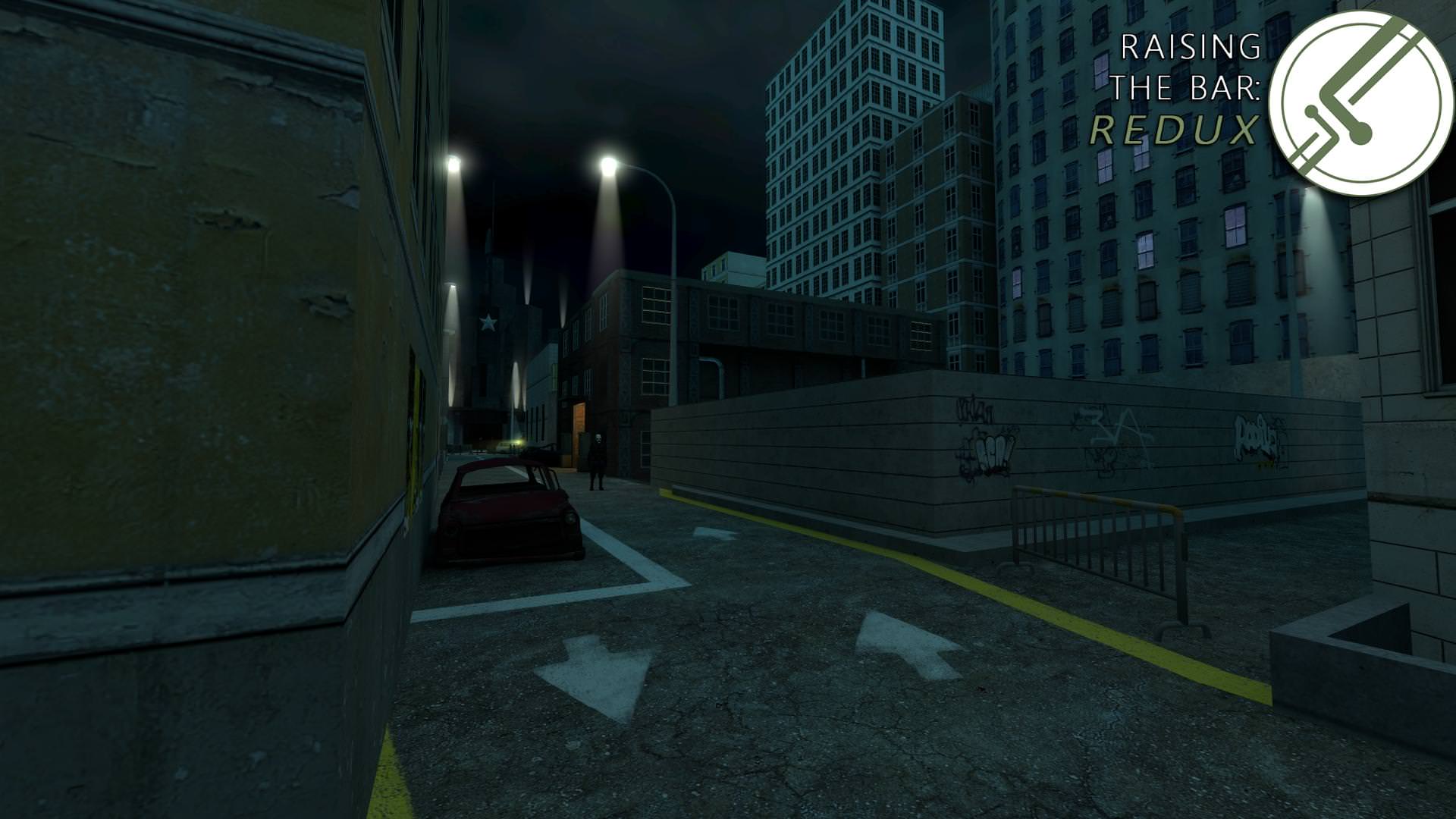 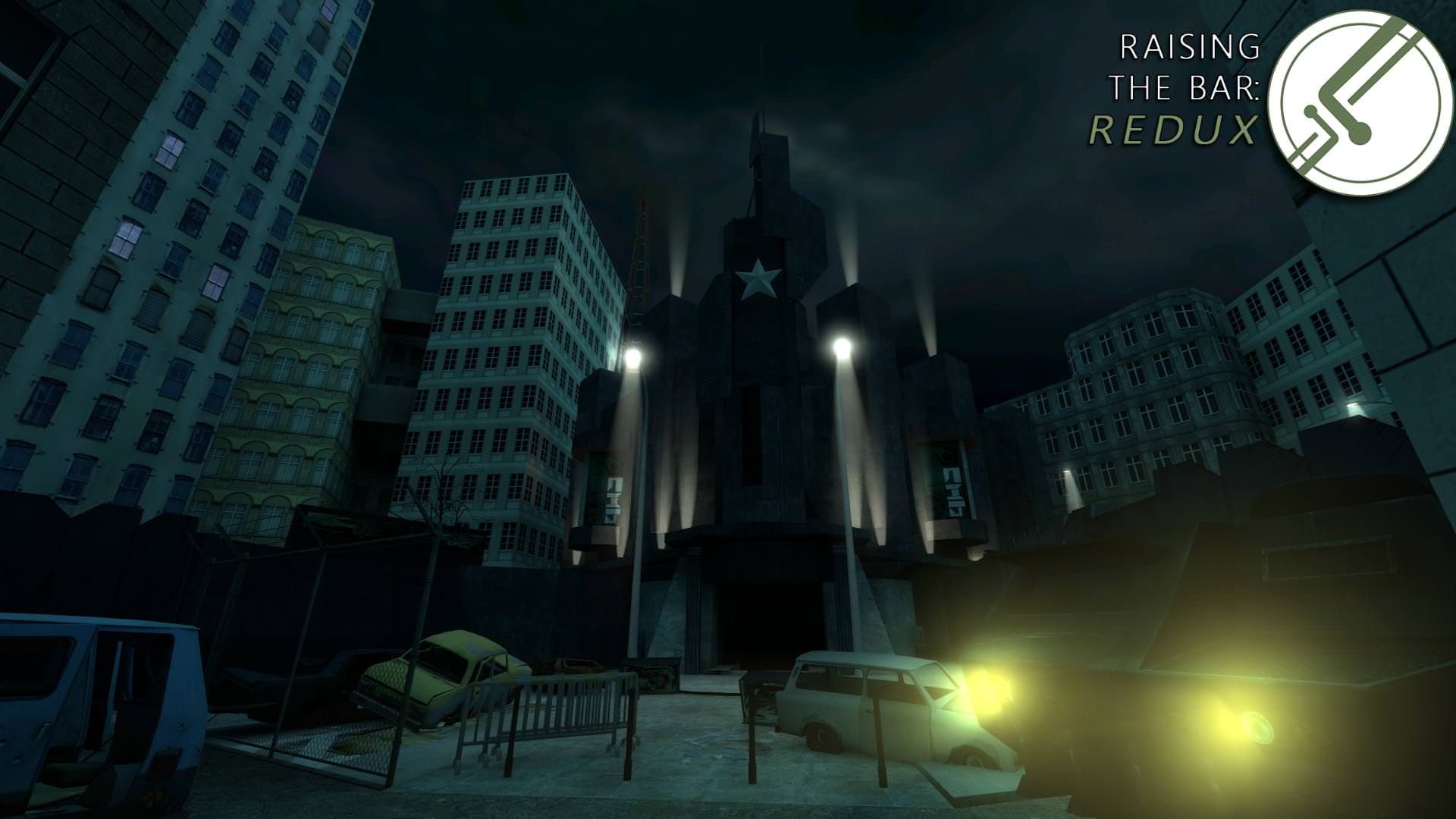 Finally, we’ve got our continued work on the consul plaza to showcase. In the last update, you saw that the consul plaza remake had begun to take place but was still very much in its infancy; however, the entire level design team pulled together, contributions from almost all mappers taking place in order to bring the consul plaza much closer to the standard we were looking for. As you can see, we’ve made good use of Cosme’s Consul Pod prop, and we’ve also added extensive detail into the map’s cityscape. Numerous secrets in hidden alleyways, nooks and crannies, and tucked away buildings await adventurous players in the consul plaza map, now, and we’re very pleased with how it has turned out. 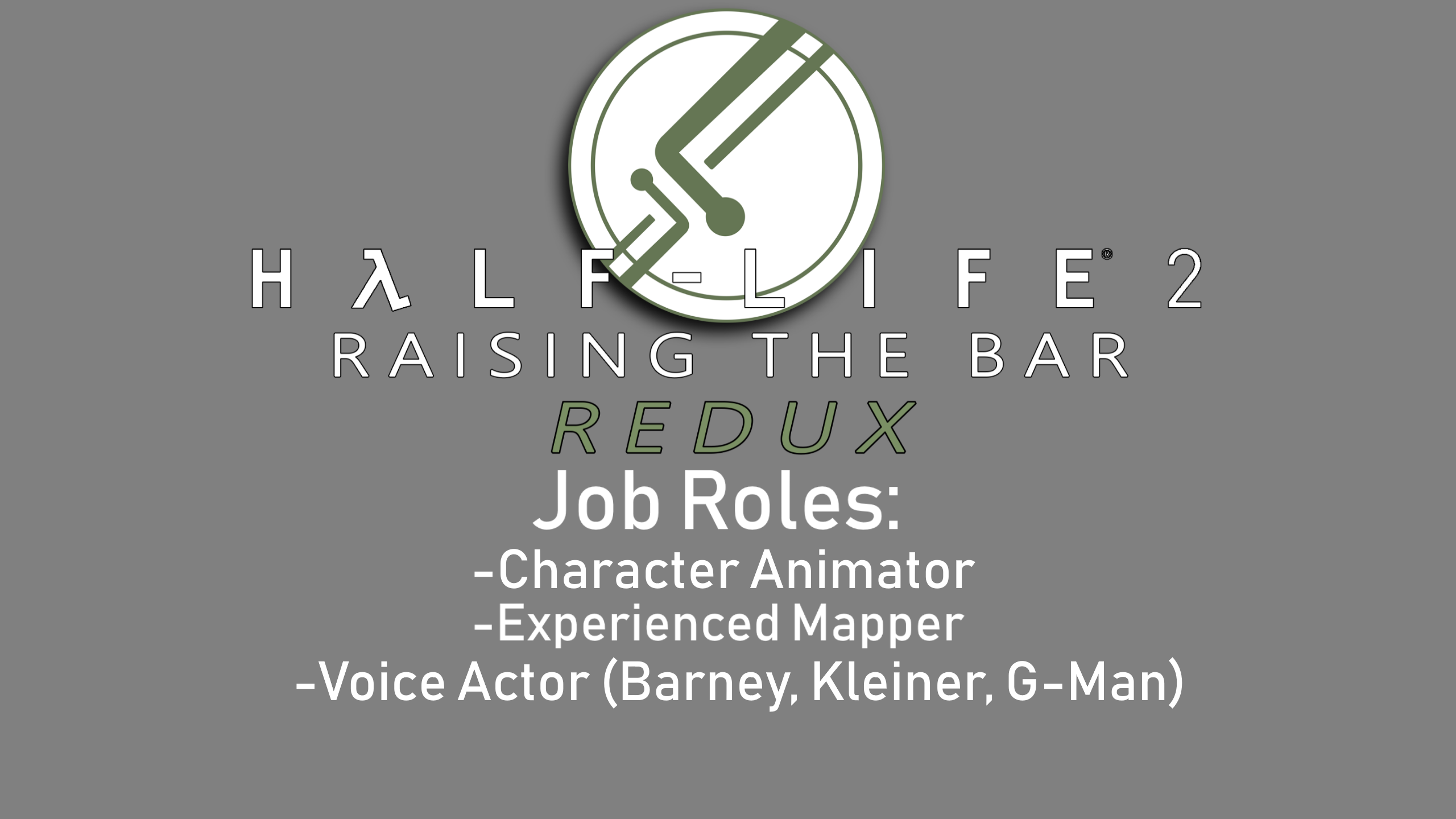 And with that, we conclude our third monthly update. Our mod continues to pick up momentum, continuing to push out new content to implement in-game, and with our new team members, we don’t show any signs of slowing down.

If these positions interest you, please add me on discord at Count Kralichula#0901.

Thanks for your attention. Tune in next month for more!

1) Why make renders in side programs, if models never look like that on Source?
Btw, on game viewmodel, area around tau's fan is all blurry and low-res, and on render it isn't
2) Sniper rifle, tau and stalker all look like they're made from the same material, some kind of rough cast iron.
3) Why take screenshot of almost-black stalkers in a dark room with dark walls? It just makes it harder to see the model.
4) Why are there several layers of cars and barricades around manhack arcade?

Lots of good looking stuff in this update :)

Loving the new terminal and consul plaza! The sniper model, anims, and sounds are really nice. I'm glad you're going with a quiet firing sound, since the beta ones would give me a headache pretty easily. Might be nice if Gordon held the grenade in a way that showed off the model a little more.

Why not use the existing voices for kleiner, barney and gman from the hl2 beta?

Keeps getting better and better!

I do agree with Chocolate-Helicopter above, that the Stalker looks a bit cartoony. It looks really great, but how the body, arms and legs are build, that looks really stiff and cartoony. Sorry, really don't want to sound harsh.
And in the video i noticed something with the grenade trowing animation. You see that the pin is pulled, but then the grenade is thrown away without removing the large pin, which is still held in place by the thump till it is trown. In reality this large pin needs also be removed, otherwise it will not explode. It does surprise me that i am the only one who comments on this.

Other then that, great progress! Really, all models look really very well made and have a high realism. The level design i find less, again, sorry. I hate it when i have to be negative! But the level design is so empty and square build looking. It's hard to explain but it just feels and looks like everything level design wise is still in very early beta. Maybe because i map myself that that is why i am so nit picking, sorry.

why are you apologizing for giving criticism

can someone stop disliking my ******* comments lol

Well, i am a level designer / modder myself. And therefore i know how hard negative criticism can be experienced by the modder or in this case mapper, that concerns the criticism.
You put in all your time and effort and try to make the best you can do. And then someone else comes and tars it down. I guess you need to be a modder to really understand how bad such a comment can feel. That is why i expressed myself the way i did.

Nice to see alive my old project alive, don't give up and good luck!

Those models and animations are absolutely gorgeous! But I'm not the only one that thinks the firing sound for the sniper rifle is a complete disappointment? I was so hyped to hear what the amazing remastered sniper would sound like and all I got was what sounded like someone trying to hide a fart in the couch cushions. Needs to be sharper and louder.