Half Life 2: Raising the Bar REDUX: Update V3.1, featuring maps, weapons, models, and the second volume of our OST.

Hi, everyone. In this Update – V3.1 – we’ve got map updates, animation updates, weapon updates, model updates, and our second volume of music. If that sounds like we’ve made a lot of progress, it’s because we have, and continue to do so, on a monthly basis. We have new team members working in areas we hope to showcase next update, too – but for now, let’s get on with it. 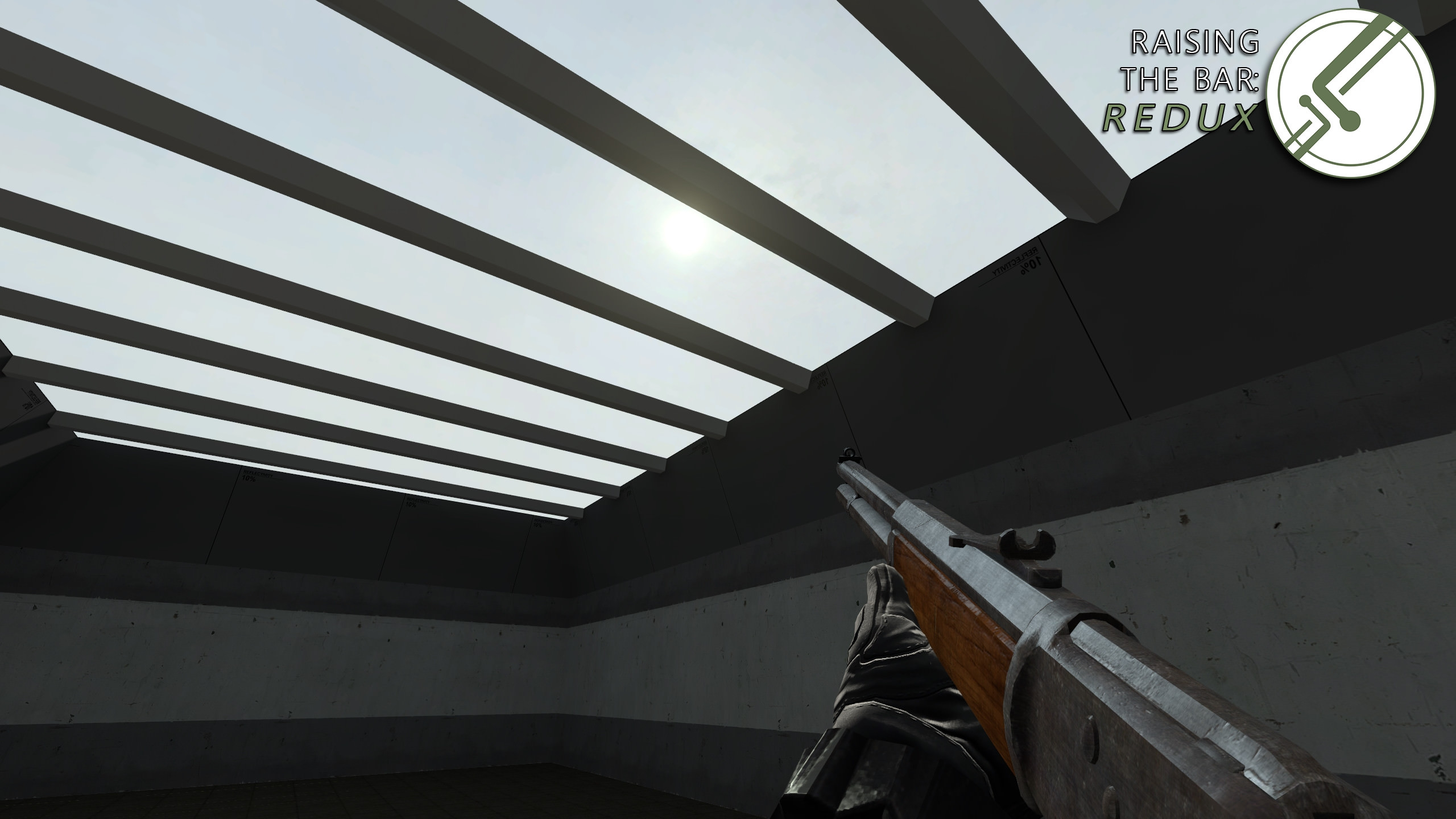 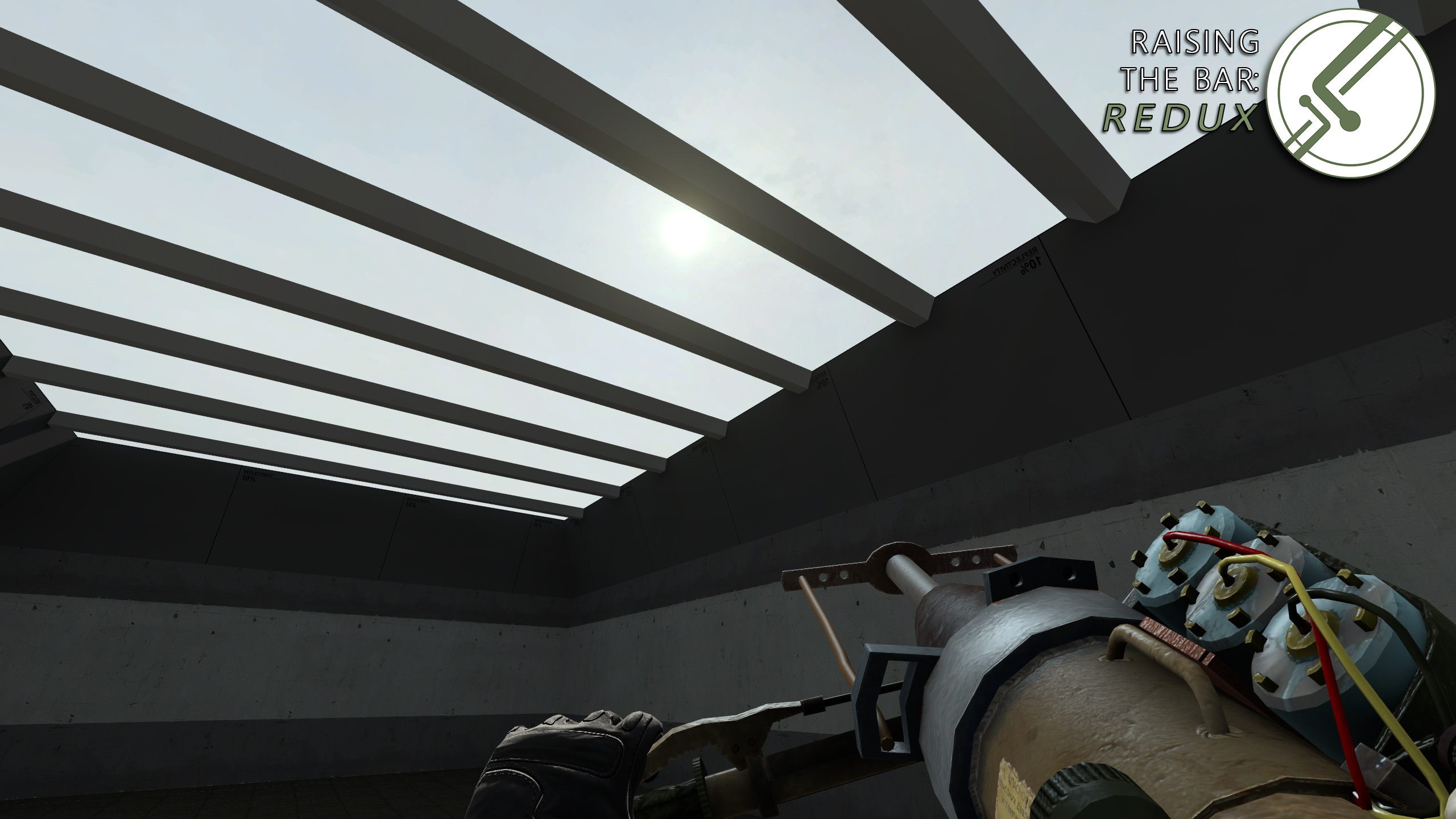 As is customary, we have updates to weapons to report. Right now, we have only two things to speak of. Firstly, YumYumShiSha’s Annabelle model has received some touching up with a new animation set you’ll see later in the video, and thus, we made some improvements to its textures and broad adjustments to its model to make it fit better for our purposes. The second, larger update is our replacement of the crossbow with the Steam Propelled Rebar, or the Steambow for short. Sage J. Fox’s recreation provided us a good basis, which we then worked with to generate a new animation set, new sounds, and some texture modifications to better suit our needs. 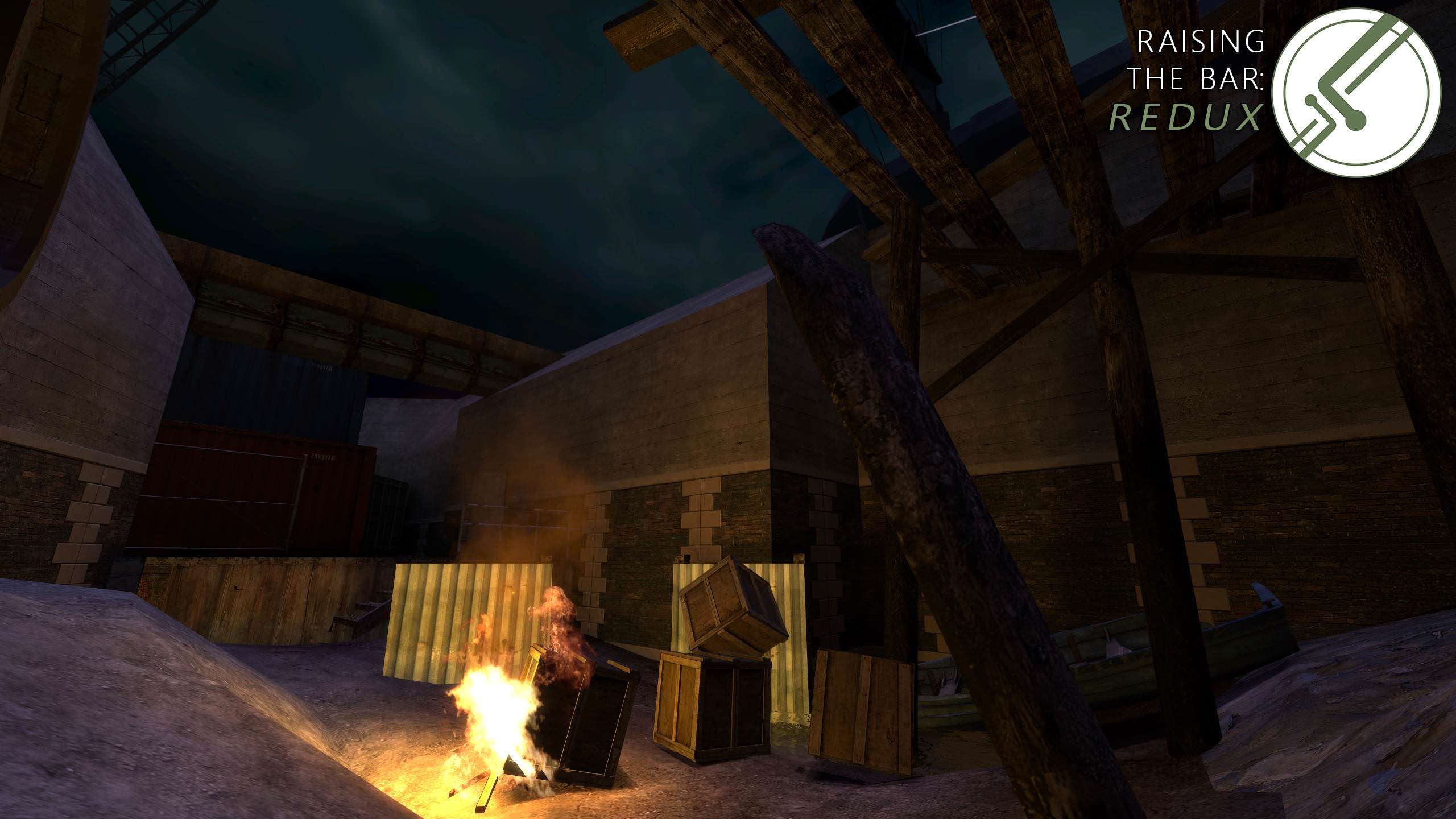 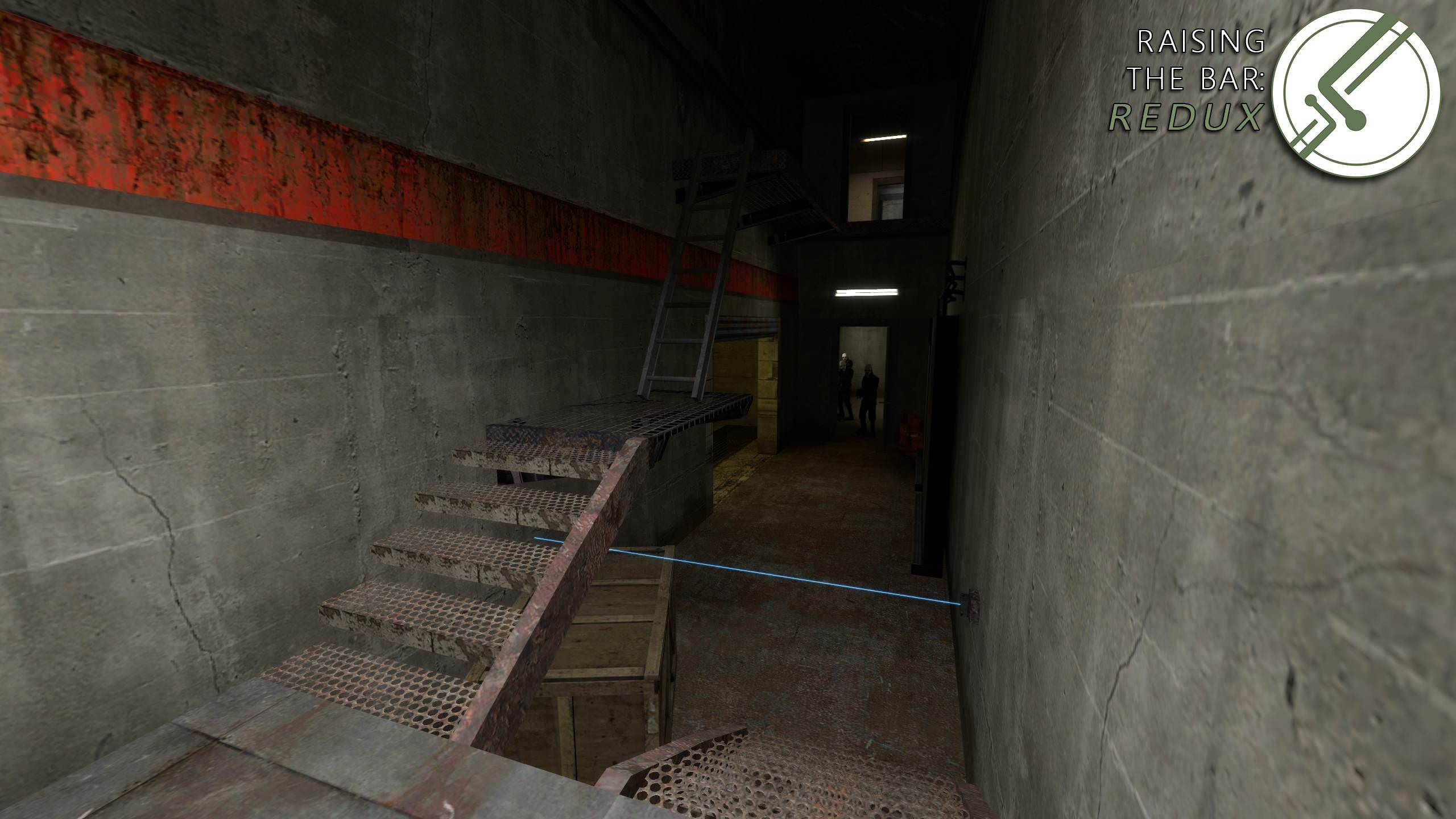 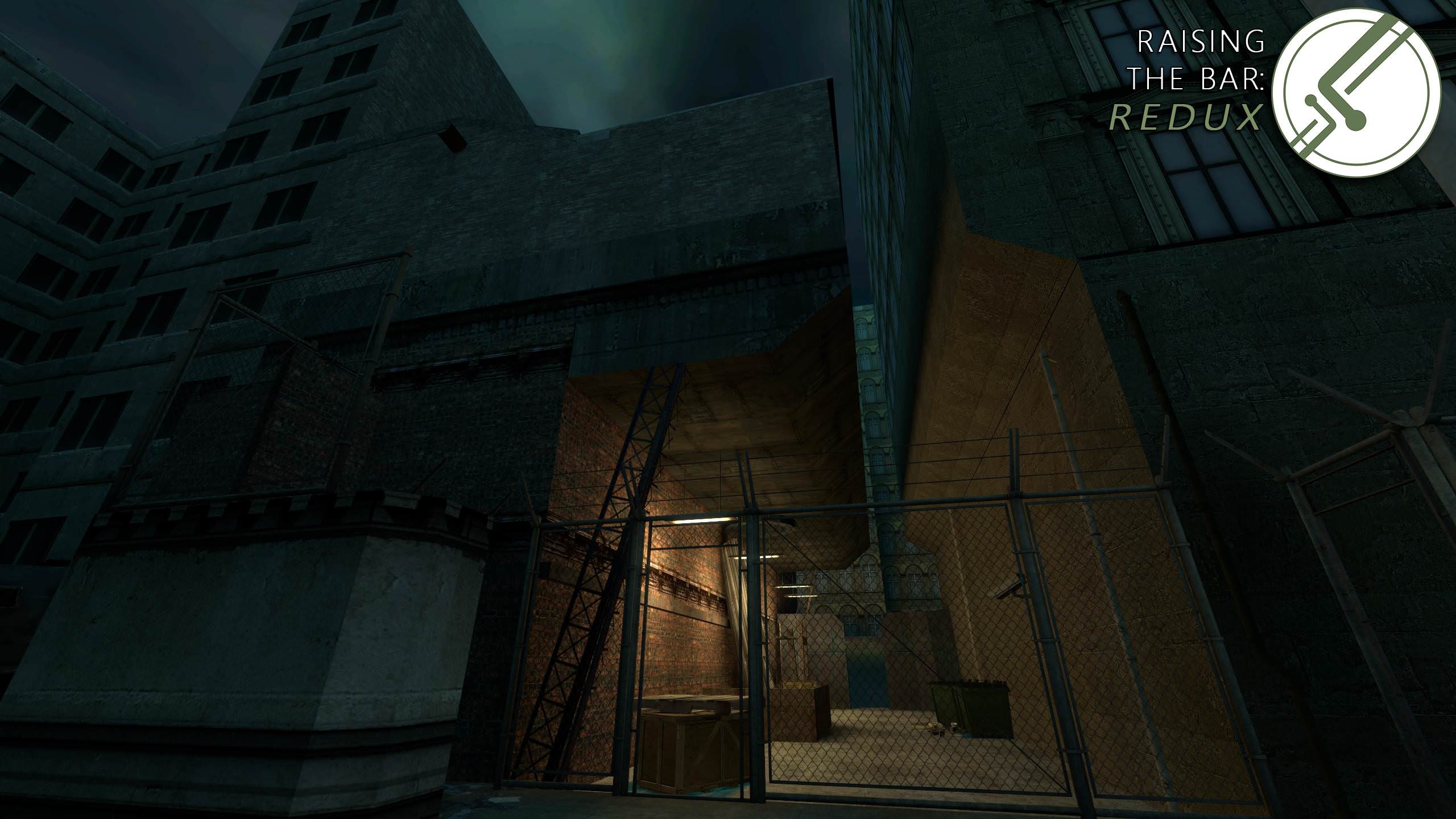 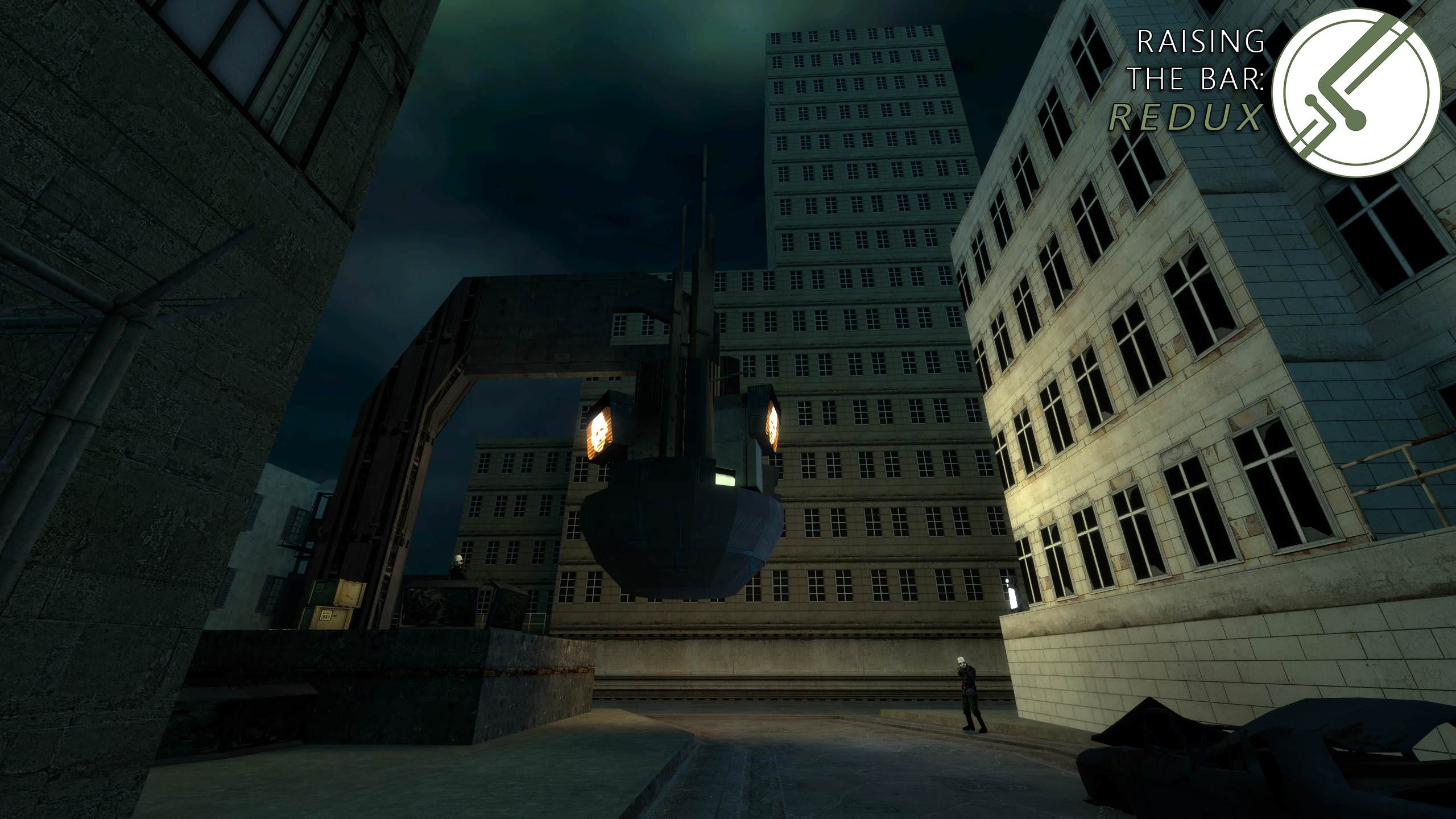 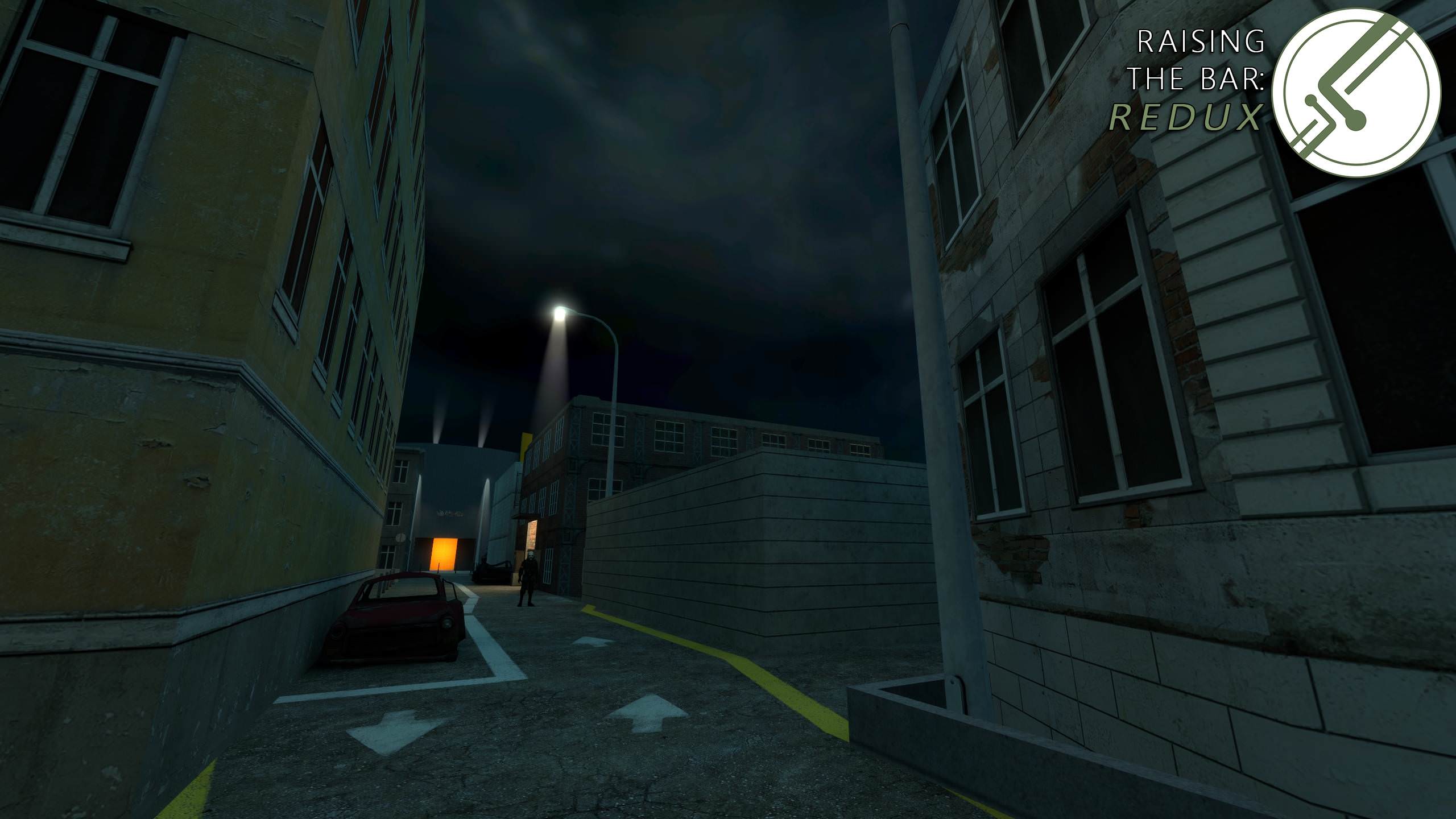 One of our key focuses in the mapping department has been revamping our old Consul Plaza map and making it better suited for our purposes. Whilst a good map itself, it wasn’t quite fitting of the nature of the sprawling plaza from the Beta, and so Honza has been focusing on remaking it to better suit the image in everyone’s heads. With a map like this, progress may seem slow at times due to the tremendous amount that needs doing; crafting an urban cityscape is no small task to expect of a level designer. With that being said, we wanted to show some early progress shots that, hopefully, demonstrate the more familiar direction our consul plaza is taking – with custom assets on the way that will hopefully expand the tools Honza has to work with. 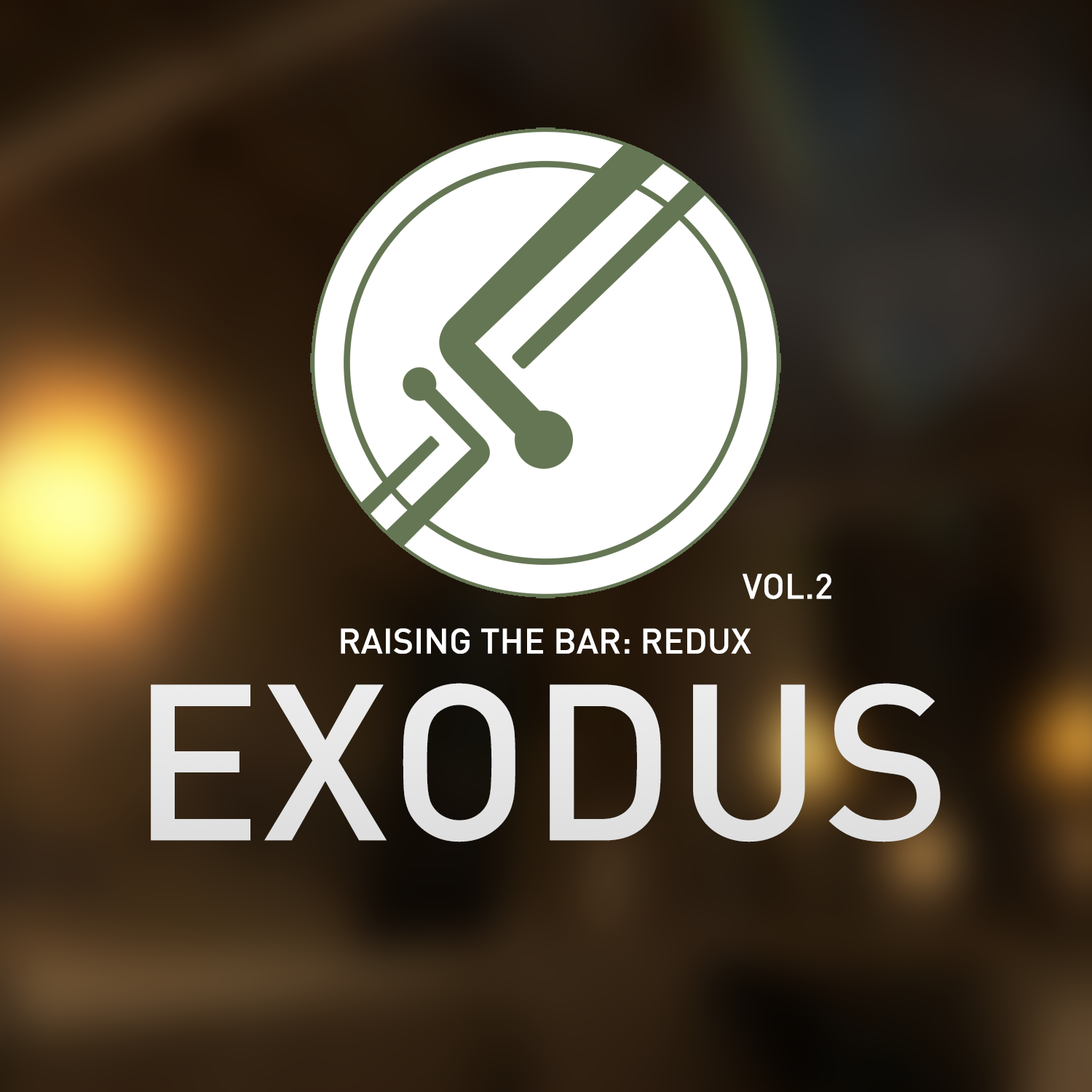 Breaking off from levels for a moment, we’re proud to present our second volume of RTBR’s OST – Exodus. The emphasis has been on much more focused tracks than Volume One – whereas Terminus Vector was mostly a volume of music made in case a situation for it came up (we didn’t yet have a system in place for specific music segments), Volume Two is primarily made of tracks for which a part of the storyline is set in stone. Cft has once again blown the team away with his continued musical endeavours. You can listen to Volume Two at our SoundCloud here: Soundcloud.com 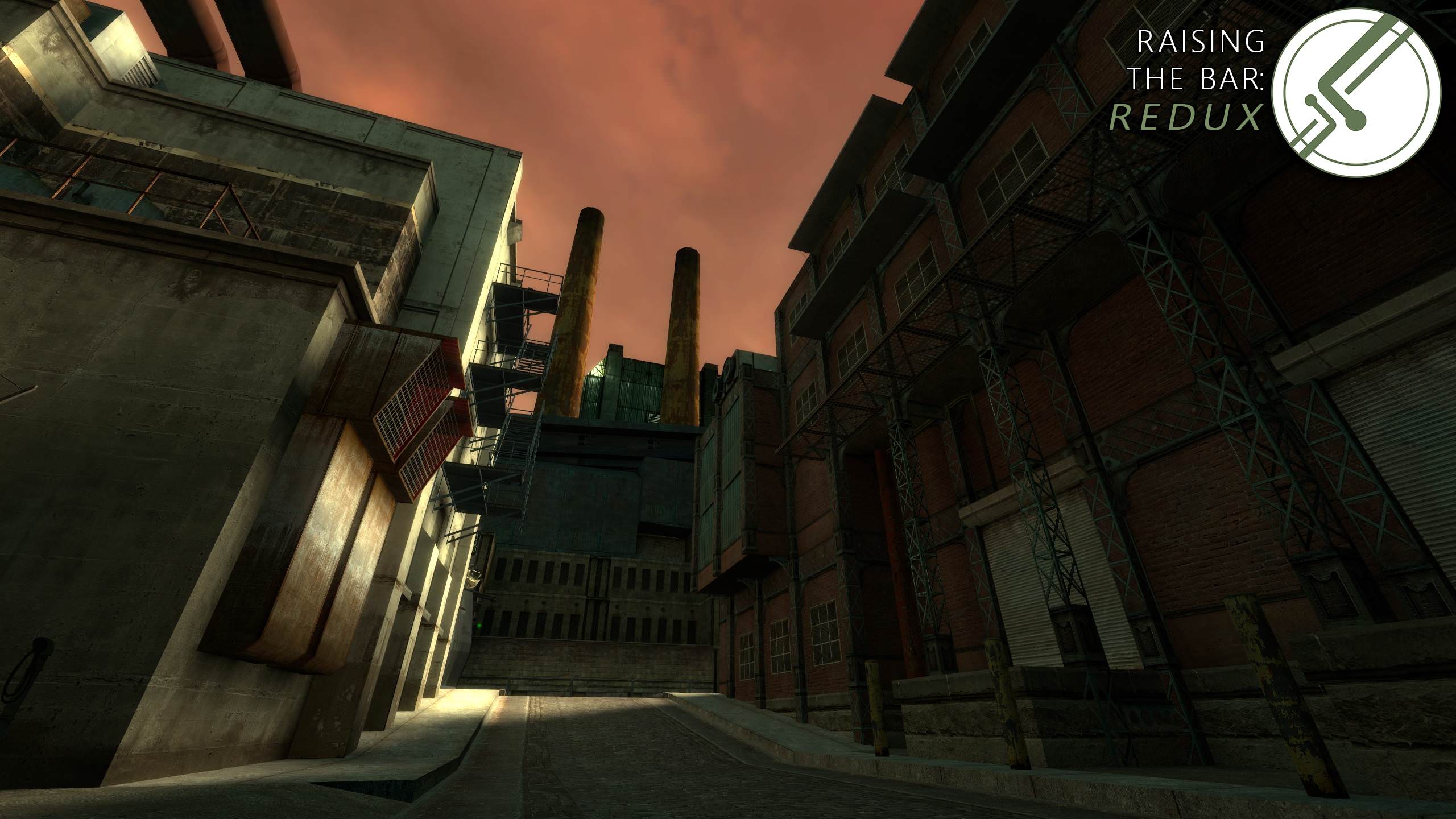 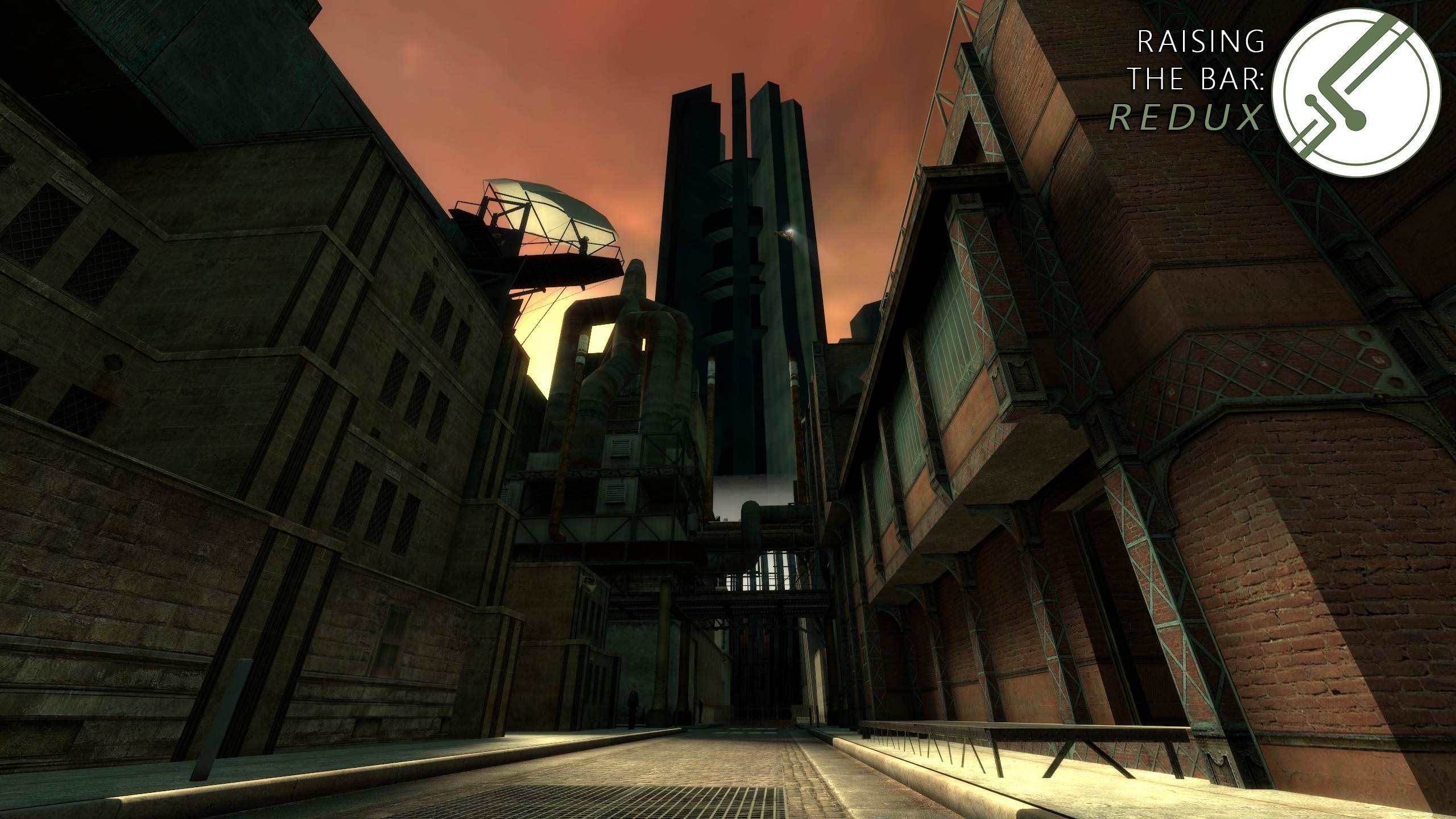 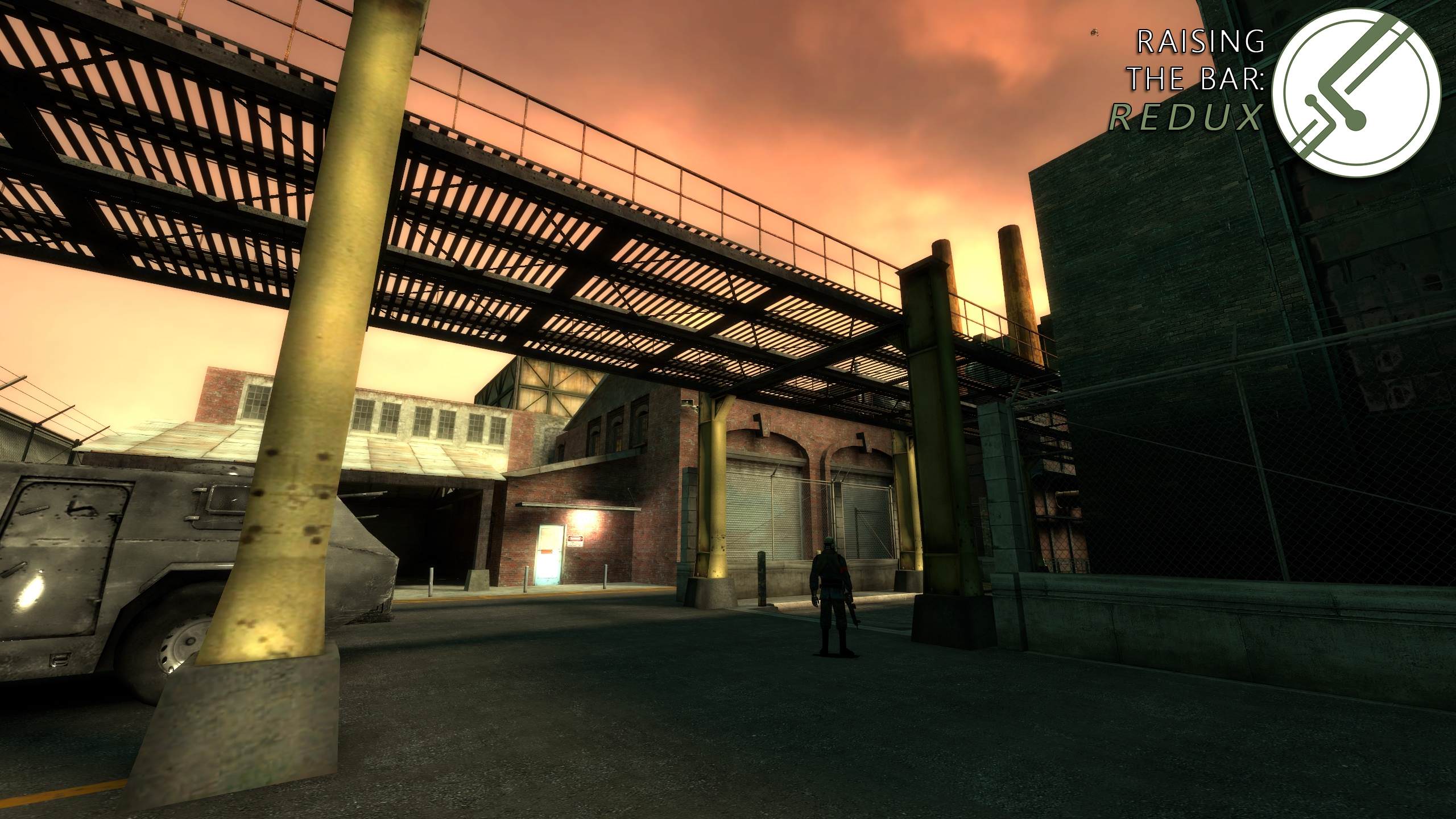 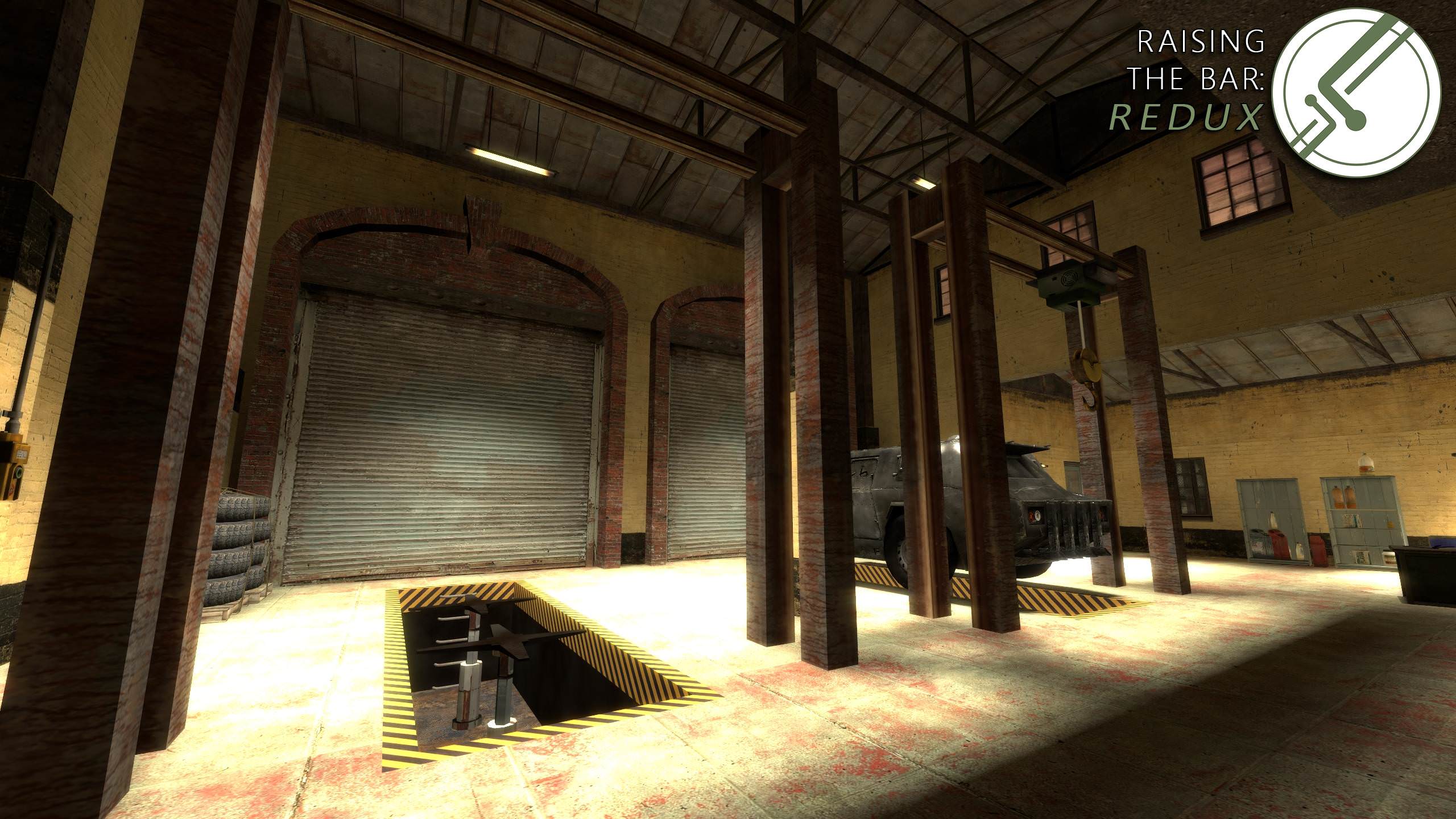 Returning to maps now, we have phenomenal progress by Cft in the form of the Industrial Sector. As the last map for Chapter One we’d yet to have made progress on, Cft had a large burden to carry. However, he proved his mettle by creating new 3D models specifically for his map to help detail brushwork, new texture variants for the same reason, and has even dabbled in scene creation so far to add life into the map. As you can see from the screenshots, he’s done an excellent job creating a familiar yet uniquely inspired rendition of the Industrial Sector – one which still has some way to go, but that, in Cft’s hands, it’s safe to say will turn out great. 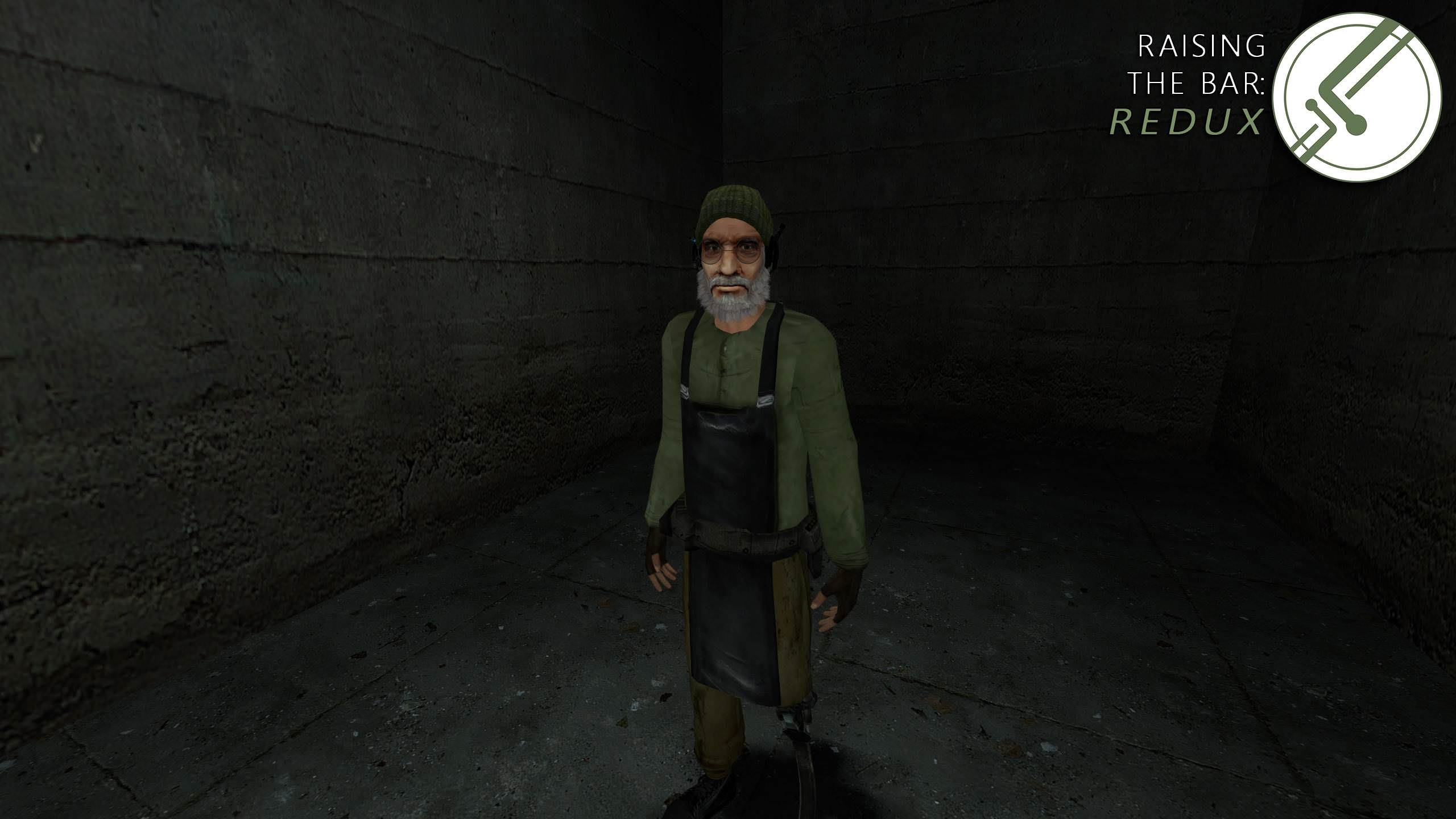 Finally, we’d like to showcase our early forays into other unique characters for the Beta storyline – here, specifically, we have Eli Maxwell. Using FF97’s rendition as the basis, we added extra details, improved textures, and created new models (such as his glasses) with the intent on more closely matching his appearance in the beta. We still have more improvements to make and the model isn’t approaching a finished state just yet, but we’re very happy with our progress thus far. 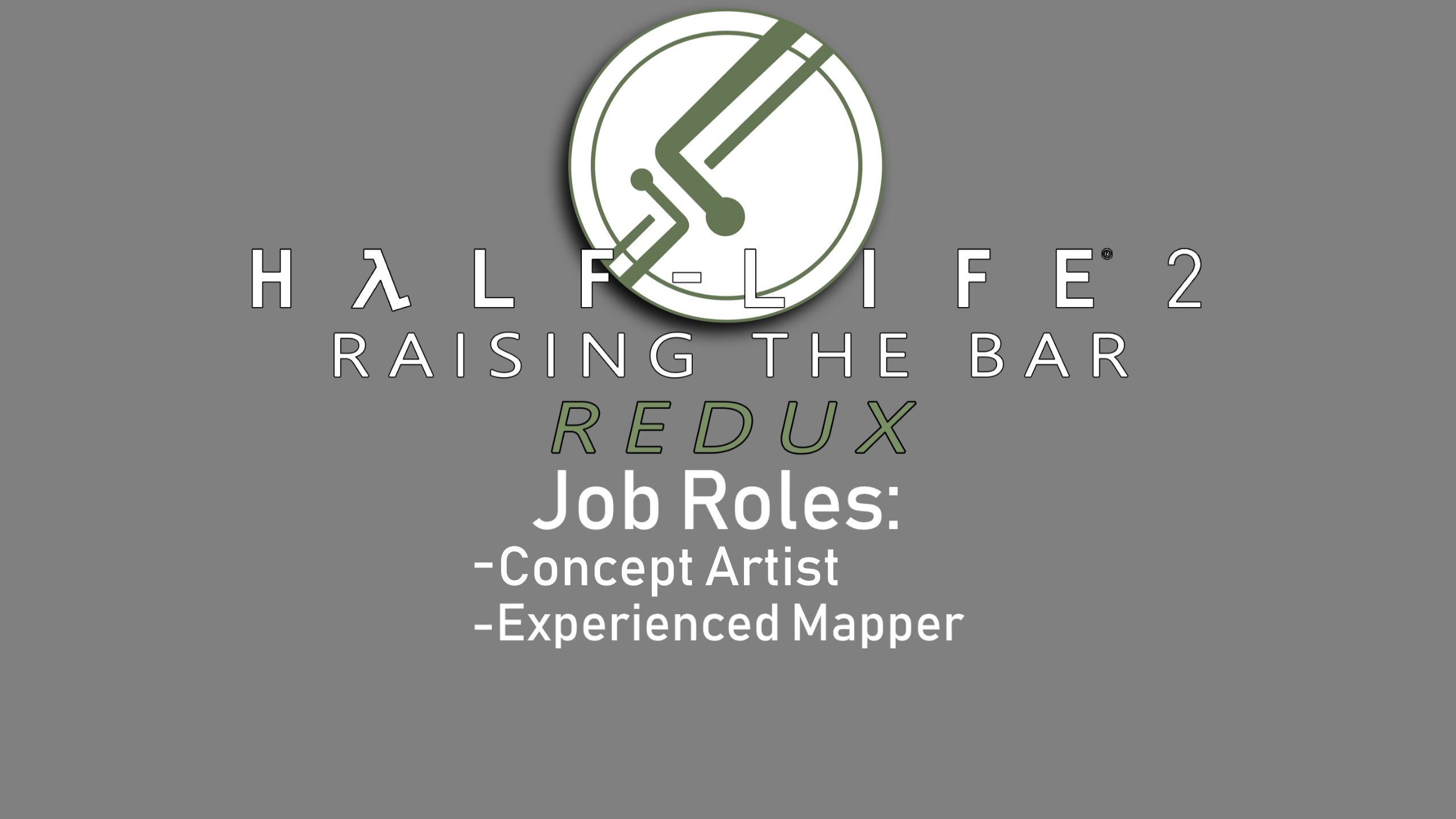 And with that, we conclude our second monthly update. The mod continues to develop extensively on a month-by-month basis and, with a new modeller, new programmers, and other team members on the way, you can expect next month’s update to be full of new content again.

Before ending, we’d like to announce the last few roles we’re looking for on the team at this moment:

If these positions interest you, please add me on discord at Kralich#0901.

Thanks for your attention. Tune in next month for more!

whoa never seen that crossbow before

woah ive seen that crossbow on the wiki before

Gonna look forward for the next monthly updates! Nice one!

I saw that crossbow replacement concept in the RTB book but never thought it was steam-powered! If so, it's a rather curious case of countering the latest Combine technology with Archimedes' invention from 3rd century B.C.!

We don't know for certain how it was powered, unfortunately, because little to no information besides that concept exists. However, we decided to go out on an artistic limb and go with steam, given how it appears to look like a pressure rifle of sorts.

According to Combine Overwiki, Annabelle appears to be inspired by the Winchester Model 1892, a rifle popular in Western film and TV series, and often used by actor John Wayne. Winchesters are available in a number of chamberings, including .357, and a shorter version also exists that matches the one used in the game. Actual Winchester rifles have a 15-round tubular magazine.

Thus, Annabelle fires pistol rounds. It would be unsafe to load sharp-bullet rifle rounds like those in the video into such magazine, as the ammo-feeding spring tension would make the caps of the cartridges get pressed against sharp bullet tips of the next round, which pressure could make them go off inside the magazine. That's why the smokeless powder rifles like Mauser 98 and Lee-Enfield already have vertical stack magazines.

Unfortunately, the annabelle sharing ammo with the magnum wouldn't fit in with our current design philosophy for how the Annabelle works. We're taking a few creative liberties to fit it in better - to be fair, Valve did the same with the Spas-12 and MP7 :p

What was the creative liberty of Valve with MP7? The retail version doesn't have a real grenade launcher, and said liberties for SPAS-12 - are these only double shots or smth else?

P.S. What is Annabelle going to be in your design philosophy? A hitscan precise rifle?

I saw your Eli Maxwell Model and i am wondering,
do you will use the 2002 concepts of Alyx and Helena too, surely improved?

We've already made moves implementing 2002 concepts of Alyx. As for Helena, yeah, we're looking into it.