The latest updates on Guts and Glory (v0.3.8) Materials with dynamic physics and giant balls of steel.

It's been a busy, busy week! Here's what I've been working on this week for Guts and Glory. 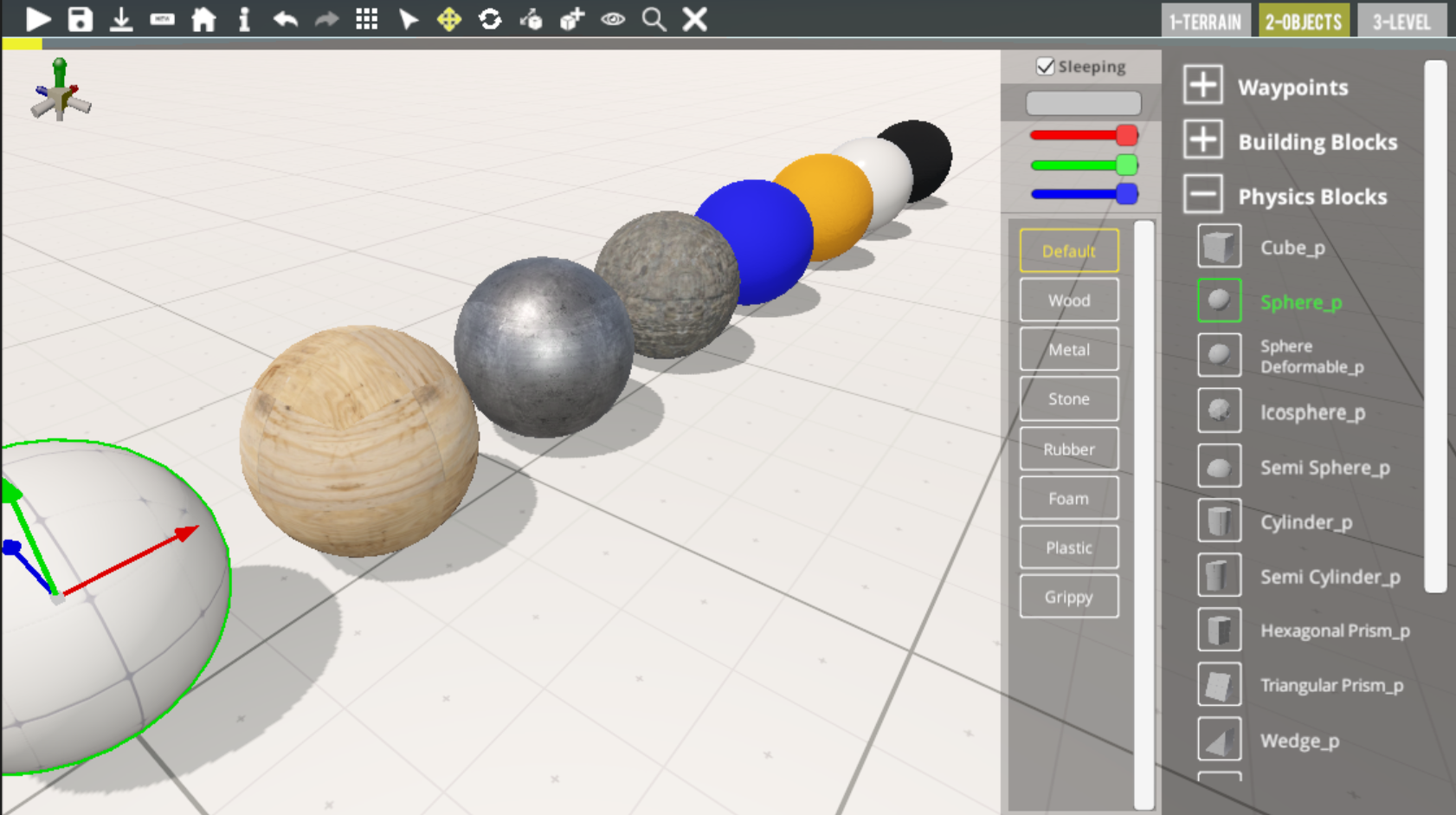 All Building Blocks and Physics Blocks now have a Materials option in the Level Editor. Each Material will change the texture, mass, drag, and other physics properties of your Block. Turn a Block into Metal and it be behave like a heavy hunk of metal. Turn it into Rubber and watch it bounce across the screen. Turn it into Foam and it will be light and fluffy. Making a Block larger or smaller will also change its physics behavior. The goal here is to create something similar to Little Big Planet's materials system.

Materials also affect wheel traction on vehicles. Plastic is a little slippery, and "Grippy" material behaves like grip tape on a skateboard. Each has its own nuances. Audio and particle effects will be added later. 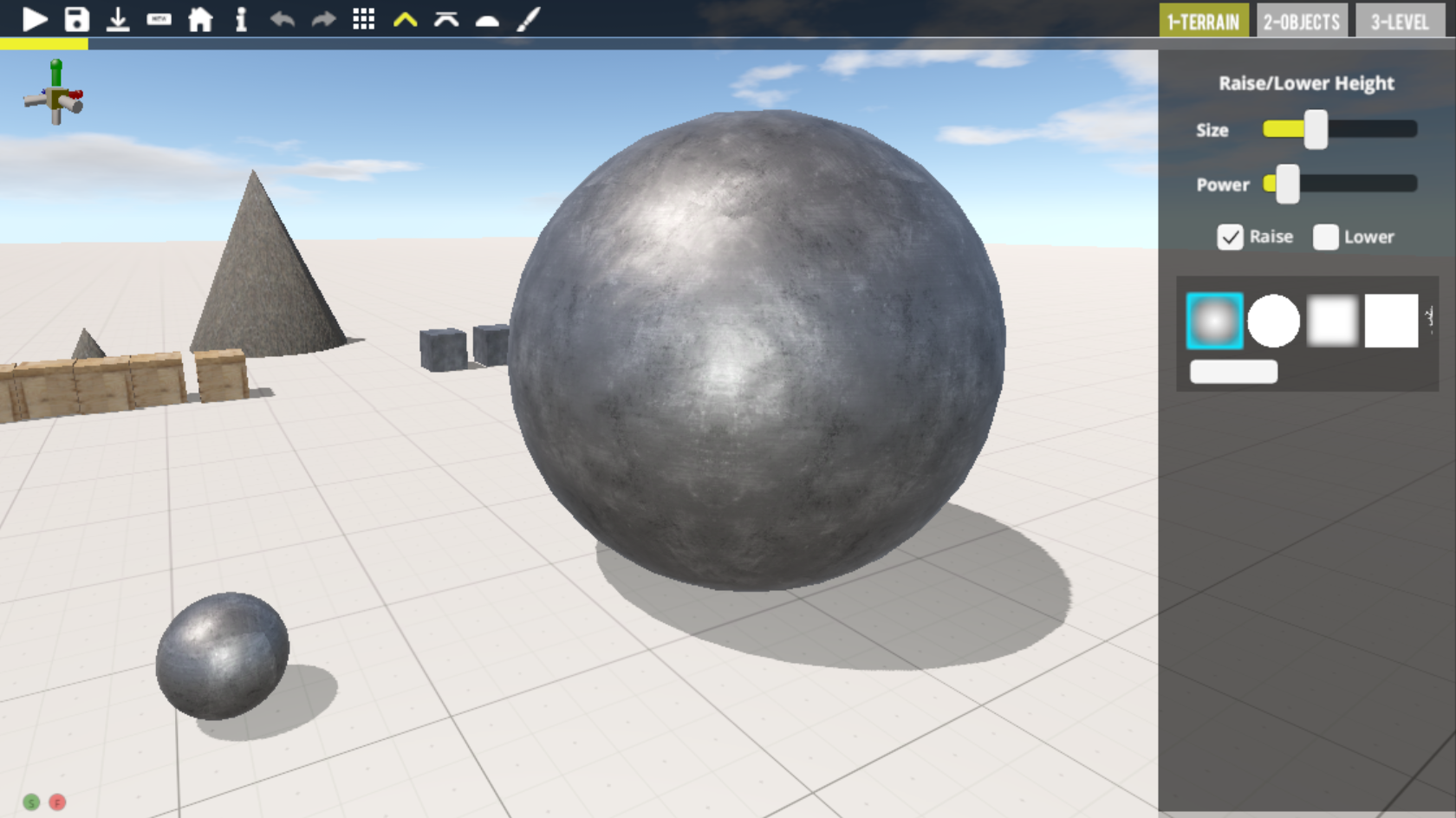 Now you can make giant metal rolling balls of death, falling stone spikes, foam pits or a ton of other creative stuff.

More Materials will be added in future updates. I just have to figure out a more efficient system of adding them first--currently I have to update each Block manually. 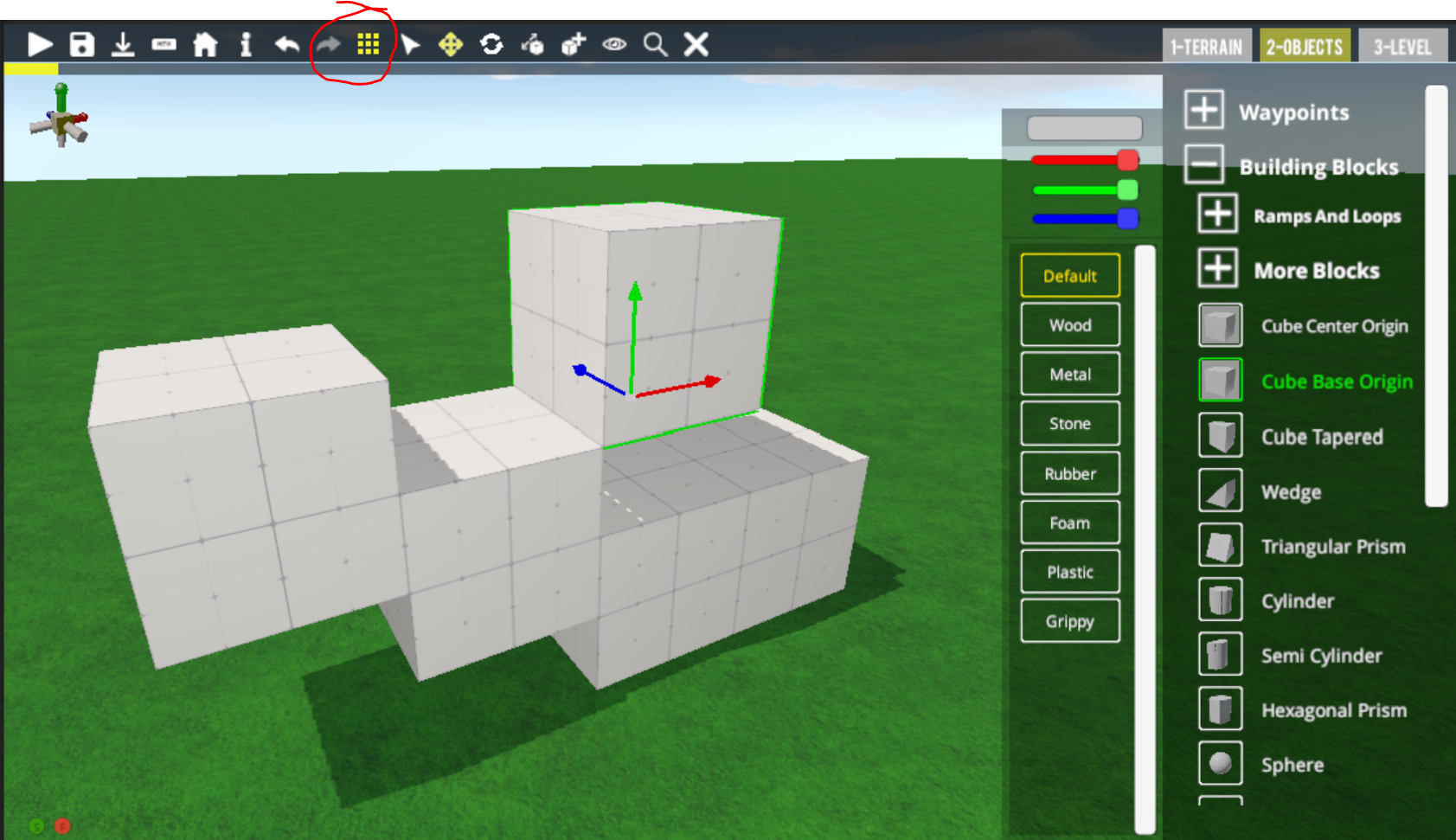 I got several requests for this feature. You can now turn global grid snapping on/off in the Level Editor by pressing the Grid Snapping button in the top ToolBar. This will shift any item you're editing to the closest 0.5 meter increment, making it a lot easier to line-up objects or fine tune your tracks.

This currently only works with the Move tool. Rotation, and maybe scaling, to be added later. 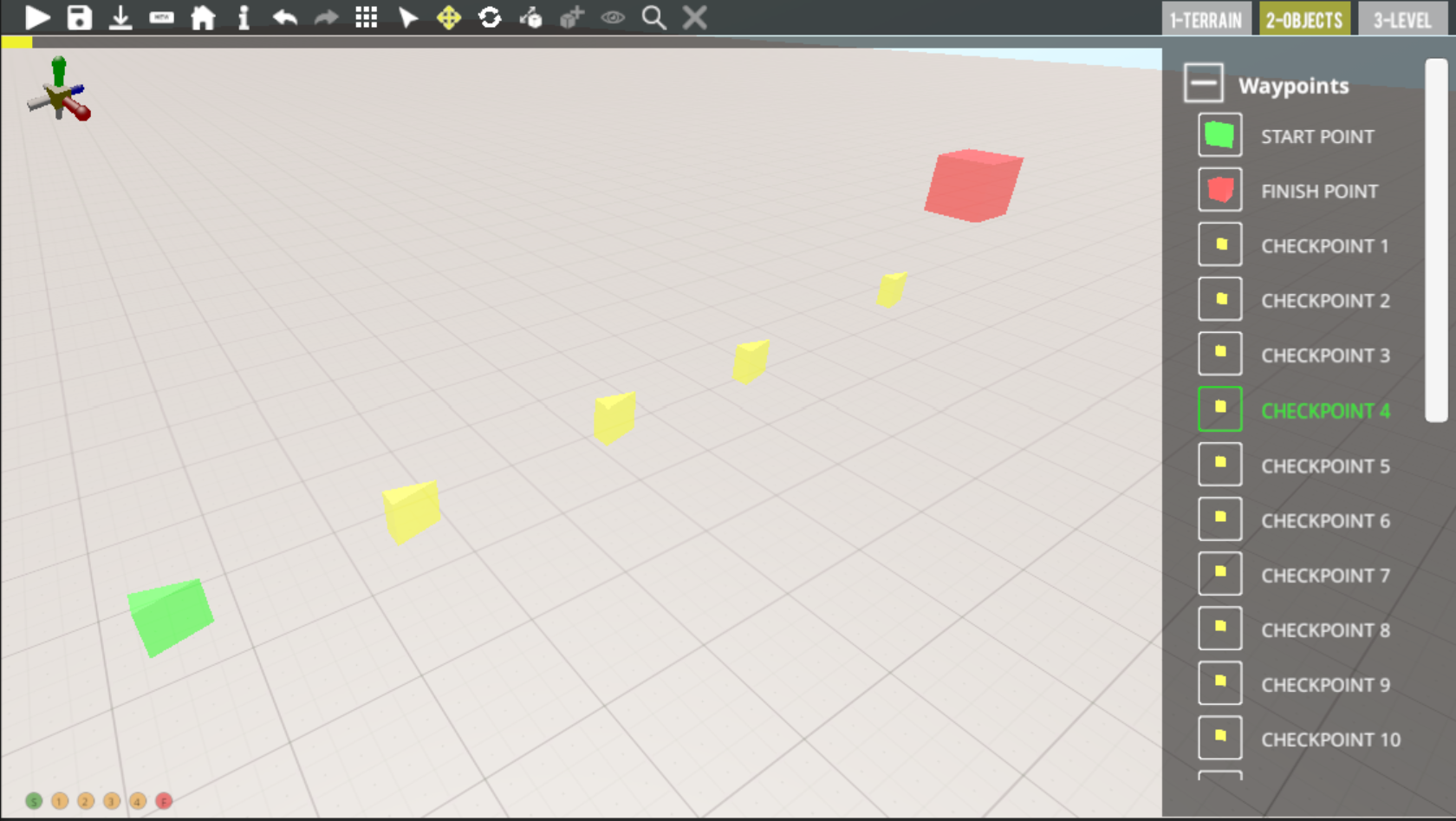 The Level Editor now has a Checkpoint Manager in the lower left corner of the screen. As you add/remove Checkpoints, this will show you how many you have on the map.

Click any of the Checkpoints to make it your temporary Respawn Point. Next time you press the Quick Play button, you'll automatically start from that Checkpoint instead. This will make play-testing your levels much faster and easier. (Shoutout to Kr4zy Z4ch for the recommendation.)

The Checkpoint Manager also ensures there are no missing Checkpoints before the level can be uploaded to the Workshop.

Saw Mills, Hanging Hooks, and Wrecking Balls are now static during level editing, for easier handling. The ropes no longer spazz out if they pass through other objects during editing, and saws don't break apart. In general, moving objects around is much less glitchy. 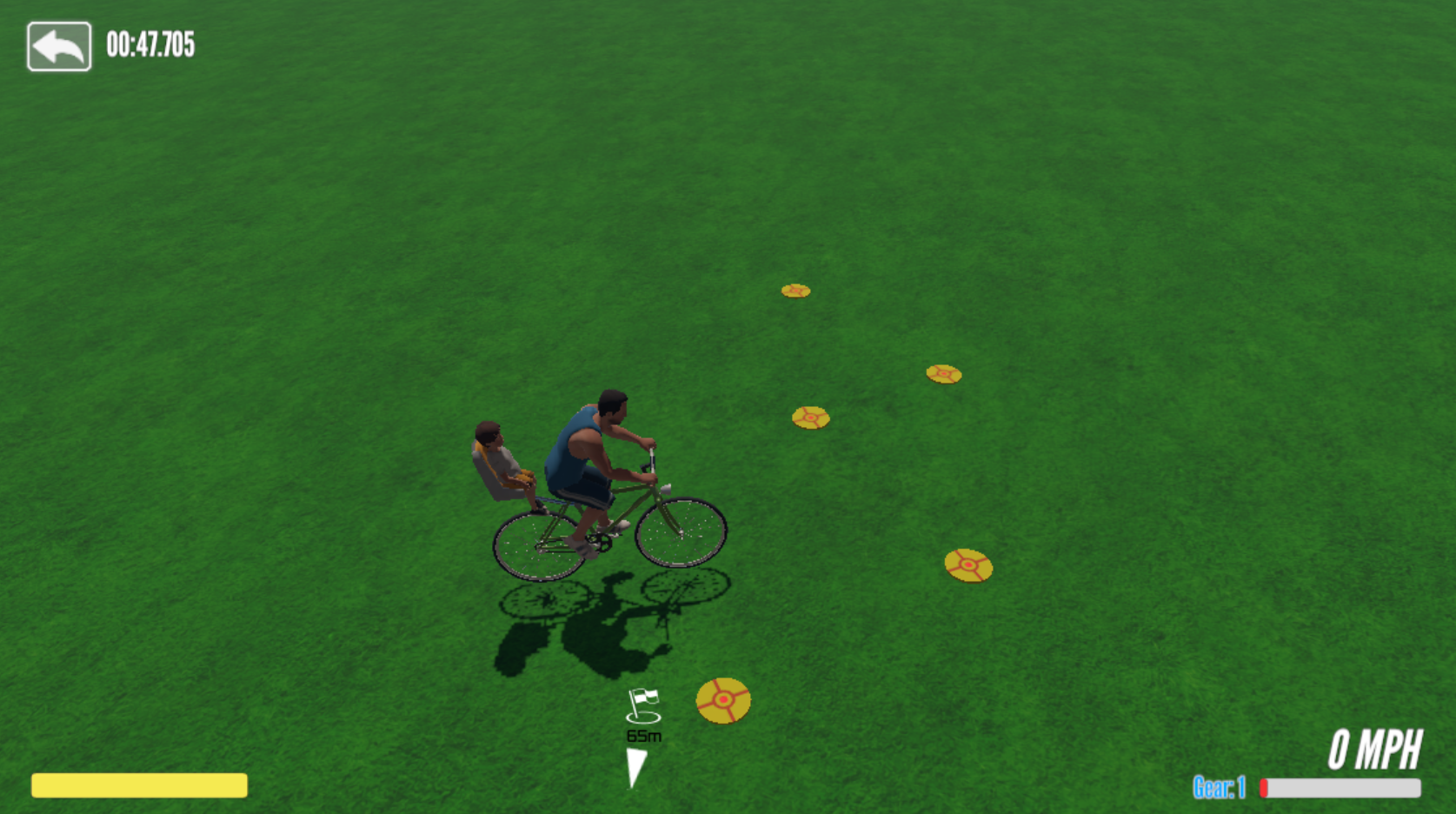 Landmine bugs should be fixed now. There was an issue causing them to sometimes spontaneously explode for no reason the first time you enter a Community Track.

Another bug caused them to sometimes fall through objects during editing. To fix this, landmines are now static during editing, so you can manipulate them just like Blocks.

Landmine textures have been changed to bright yellow and red. They were way too hard to see on grassy maps. They still only have a red glowing light in the dark though.

Landmines now have a Sleep mode. Yes, this means you can put them on walls, ceilings, or suspended in the air.

There is now a "Next Track" button for Official Tracks. I ran into issues with adding this for Community Tracks, so that will have to wait until another time.

Bugs such as the play mode HUD ("Ready? Go!") getting stuck on screen, disappearing buttons, and stretching for some aspect rations should now be fixed. Also, animations have been removed from file menus in the Level Editor to speed things up.

There was also a bug that sometimes caused the game to think the player was dead after a respawn. This should be fixed now as well.

Falling into infinity is no more! Going off the map will auto-respawn your character now. 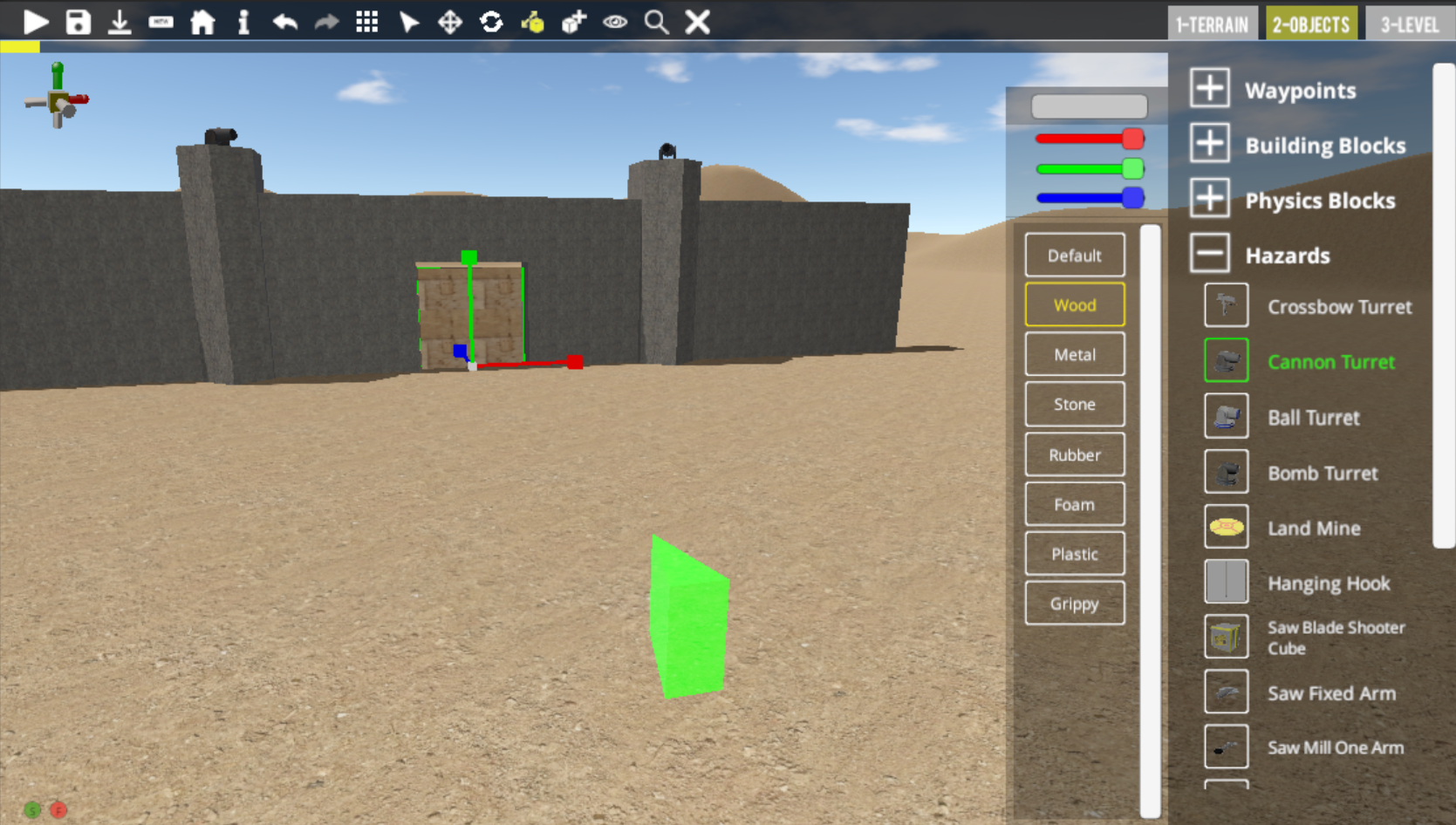 Thanks to your feedback I was able to track down and stomp out several bugs and make other improvements. Finish Point flags should stay up better, some difficulty curves have been improved, fences are stronger, skids marks work slightly better, and headlights now automatically turn on at night.

If you want to see the full Change Log you can view it here.

Looking forward to seeing mods on ModDB and workshop!

Thanks! I plan on looking at possible ways to allow for more advanced modding, beyond the level editor, later in the year. ModDB will be key for that.