Following a successful year's release, with v4.1 on the way, GoldenEye: Source asks for your 2010 MOTY votes, shows Silo, PCgamer info and more!

We are on the cusp of really making it - our definitive out-of-beta release, that is! But to our humbled perspective, it appears in some people's eyes we have long made a complete package. PCgamer, one of the premier gaming magazines, gave us a shining and epic review in our alpha release ; It was a half page of GE:S hype and we were pleased to be so exposed outside the modding sphere. In this beta 4 period, we have again been blessed and honored to be exposed by PCgamer. This update will detail that article, tell you about supporting our MOTY campaign, show off a revamped Silo, and inform you on the community side of things.

In the first year of our mod, we had our alpha available to the public, and the hype was massive. Gamer's worldwide wanted to check out the product we presented, and get their nostalgia fix. PCGamer was behind our efforts even then, dishing out info and kudos. Years on and our perseverance each release is still aimed at providing the quintessential GoldenEye experience!

PCgamer's showcasing of our mod to the masses is fully appreciated, and the recent issue "Holiday 2010" featured a page layout dedicated to us, entitled "Why aren't you playing GoldenEye: Source yet?". Indeed, PCgamer, indeed. With a current severbase of 15+ available 24/7 (far more, months after release), our mod can house over 200 gamers at any one time, playing of course for free. Just a friendly reminder! 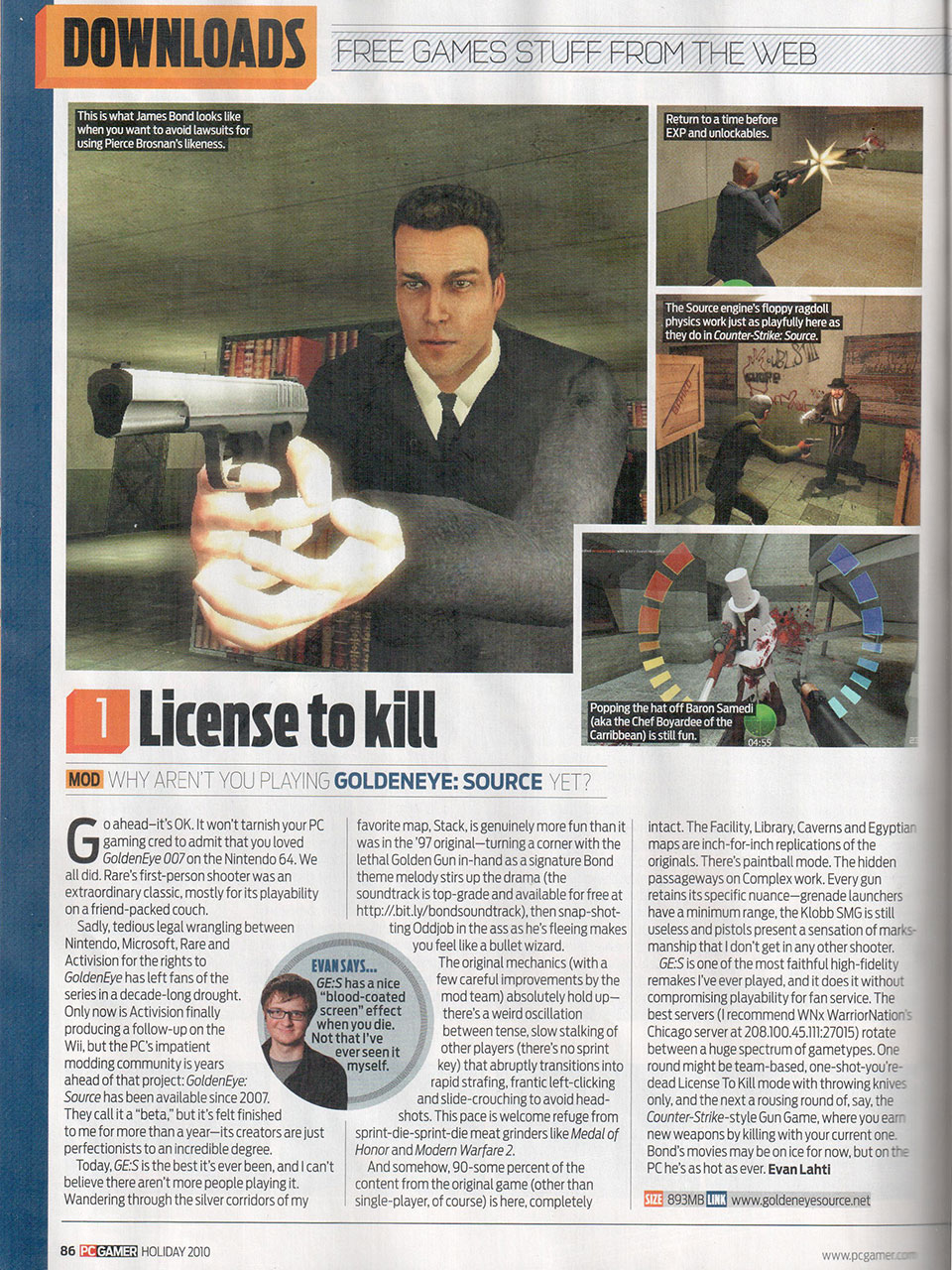 Evan wrote: "They call it a 'Beta', but it's felt finished to me for more than a year"


That makes us very pleased to hear. We feel that our gameplay came into it's own in a big way, we have taken 4.1 to really hone the user experience for a more retail-esque product, as shown in the last media! To really make it intuitive to the newer people being exposed to GoldenEye mechanics.

Evan wrote: "Today, GE:S is the best it's ever been, and I can't believe there aren't more people playing it"


Play in another month's time, Evan! We believe you will be surprised and pleased with the further gameplay polish, and by being surrounded with just a few more eager GoldenEye enthusiasts, putting it mildly.

Evan wrote: "GE:S is one of the most faithful high-fidelity remakes I've ever played, and it does it without compromising playability for fan service"


We love to hear that. I think this is the biggest complement we could receive from a professional reviewer. Never mind the download figures, or hype, or any of that over the years. To receive a statement like this is just a reflection of the dedication of years we have placed into this project. And that is our big thing, fan service!

Check out this interesting panel from PCgamer. Their PAX panel talks about the optimism and possibility of gaming on the PC platform and fostering broad and specific communities. We here at GoldenEye: Source really relate to the things discussed in there. The panel gave us a generous shoutout which you can listen to in its entirety below.

After an "Honorable mention" last year, came our release of beta 4, and really the cementing of our 2008 goal once recoding on OrangeBox technology began. You gave us an honorable mention, your votes in the ModDB awards put us in range of a top 10 birth. This year, the year of our large beta 4.0 release, you can help bring us inside that top 10. First phase is easy. Just head to our moddb splash page and click the GREEN "vote" graphic (exampled below). That is how you get us into the top 100!

Somewhere during the next phase, you will be able to download and play our v4.1 of GoldenEye: Source. We want you to use that experience to decide if we should get your top pick of 3 candidates MODDB lets you select (in phase 2). If you love us regardless, go ahead and choose GoldenEye: Source #1 of Three, the second you are given the power to decide your MOTY. We'll catch you in-game during December and thank all those who give us the love.

This map is a staple of 4.0. Many loved the map, but there were some flow issues and it was decided that an overhaul would be necessary for v4.1. Since the original mapper, Sporkfire, is now unavailable, Luchador was brought in to do more superhuman feats than we could imagine. Along with his other mapping commitments, he has completely revamped, retooled and reworked the whole of Silo. Making significant style advancements that are in line with maps from the likes of Fourtecks, and Sharpshootah.

We really became stunned at his work rate, and ability to make all of his own prop models, to integrate with his level design skill. Top job by the Luch, and we know you will all love playing it! Especially the flawless fixes made to the previously pesky elevator system. 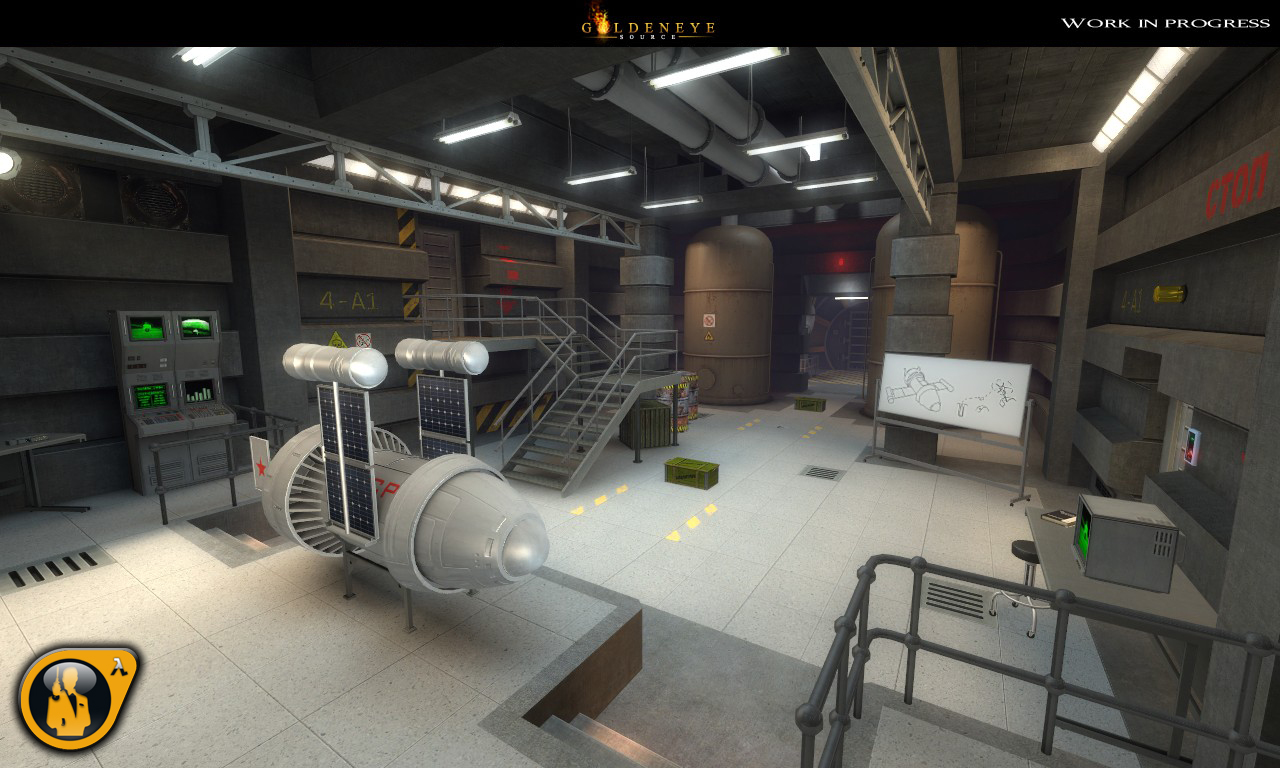 Every great mod needs one. We have had many developers pitch in for these roles, whether it be from PR department or from the Beta testing crew. This initiative will be a dedicated role for organizing tournaments and community events, making videos, having a presence on the forums, spreading our mod around the internet using Youtube, Twitter, Facebook, ModDB and helping manage the physical SMF board system on a daily basis (if need be).

Qualifications would be most important time related, but you need to know how to do every aspect of the role to get through our trial.

- Workable with SMF board administration (knowledge of CSS coding included)
- Able to seek out server competition partnerships
- Know the best strategies to spread word of GE:S
- Videographer (know your way around source demos etc would be a start)

We require an availability of at least 5+ or so hours a week (peeking on weekends) to work with our team on the matters we need for this role. You need to be well versed in English, preferably in the U.S or UK, and have played our mod and gotten involved in the playing community since 4.0.

A Clan member involved in GE:S community would be alright, however you must apply officially and be available and dedicated to us, over your clan commitments. [What you get out of this role aside from helping an appreciative team, is access to our DEV system, work in a high class mod environment, DEV tag in-game and credits in each mod release]

Apply Here if you qualify! Thank you.

On the production side, we also require some targeted and dedicated roles to be filled. Over the journey of our mod we have experienced great successes with our development group. So much so that at this point in time near all of our developers from the 2005 era are in the industry or in professional capacity within their skill set, and having buzzing careers, limits their involvement to supervisory and oversight of development.

At any given time we have 5+ trial candidates getting put through their paces, however our high turnover rate in key roles is cause for some minor frustration for the team. You as fans and followers are affected by this too. The question comes up often as the sun rises! "Great mod, when is SP coming?" Common query, easy answer. SP can begin when Multiplayer content is done. MP content will get done when we have more developers in each area of development.

We will update our availability each quarter from now on. This is the current needs of the team ;

Here is some basic criteria for application

* 16+ years of age, and mature
* passion for modding/ability to learn and grow
* 1+ year experience in your skill set
* ability/availability to commit time to our team, and communicate your progress via our boards
* able to handle constructive criticism from development group (most important)

If you are in university, or finishing up your high school education, and have a desire to work in the industry and grow your skills before you make that leap, consider a proven high class mod which is highly visible in the scene! Consider GoldenEye: Source as your next stop for application! Each of our department leaders has 5+ years of experience in our mod alone, and plenty more knowledge within the gaming industry.

Go Here to post your professional application, if you qualify! Thank you.

Remember to vote for us in the MOTY 2010 awards Phase 1/2, and be on the lookout for more updates, for our media #3, and then our v4.1 release. Thanks for reading up on all things GoldenEye: Source! Catch you soon

Our community forums and other social outlets are always welcome places to hang out, support us and find more!

It'll be fun to see public reaction to Luch's work on Silo.

way ahead of you

Good to hear! We appreciate the support

a whole page in PCGamer, respect !!
I cant wait to play on that nice silo map, thats such a nice map.

Thank you for your mod, its so awesome.

Goldeneye Source really deserves more publicity. On a side note, will there be dual welding in any later versions?

When SP comes around, we will unveil dual wielding plans, and announce in which way Duals will be implemented. The simple mirror method in the n64 is not viable or up to standard for a remake.

why, the hell, haven't I downloaded this yet???

Not sure. If you wish to play a fully sleek version, you might consider waiting until v4.1 is out. Just around the corner will see more players about! Until then you could always download the mod from moddb to contribute to our download figures :)

New to this mod - really wish i hadn't sold my N64 - Its worth buying one just for goldeneye.

Is there any ideal release date you have in mind for single player?

Hi, peteyt. We're unable to estimate a release date for single player, but we will update you when we have made significant progress on single player. Of course we're always looking for new developers who can help bring about a single player release sooner ;)