GoldenEye: Source breaks silence to give you one hell of a media release and report for the month of October. Relaying info on progress to coding and mapping, plus more. Strap yourselves in, ModDB!

Everyone at Team GoldenEye: Source is so excited to be giving you this media and mod progress update, and we know we had a few months off the chart for updates, since our big releases earlier in the year. Behind closed doors we've been progressing so well, the reasons and apologies for the lack of word you wouldn't even remember by the end of this update. So, strap yourselves in as we reveal whats on the plate for beta 4!

On the coding side of the house we have fixed many little bugs that were in Beta 3.1.4 (released march) but didn't directly impact gameplay. We have also implemented a plethora of new features in Beta 4 that further extend the GoldenEye 64 atmosphere.

One key update comes a new gameplay engine based on Python instead of our current LUA. This not only
allows us to more closely integrate the gameplay scripts with the C++ architecture, but it also
makes it easier for us to create custom AI for our mod that can be tuned to each gameplay! This
advancement is still under works, but should be ready for Beta 4 or as a downloadable addition. Things to note:

The Caverns map, by Sharpshootah, is definitely one of the multiplayer dev favourites and we delight in getting to experience this revisioned level. The map is capped off with extra areas accessible, the most instantly recognized is seen in screenshot three (caverns_2.jpg), which links the lower section with the upper via the glass panels and holds two weapon locations. The atmospheric enhancement available and utilized by sharpshootah on source, and the anticipation of a community, makes this map one to really look forward to! 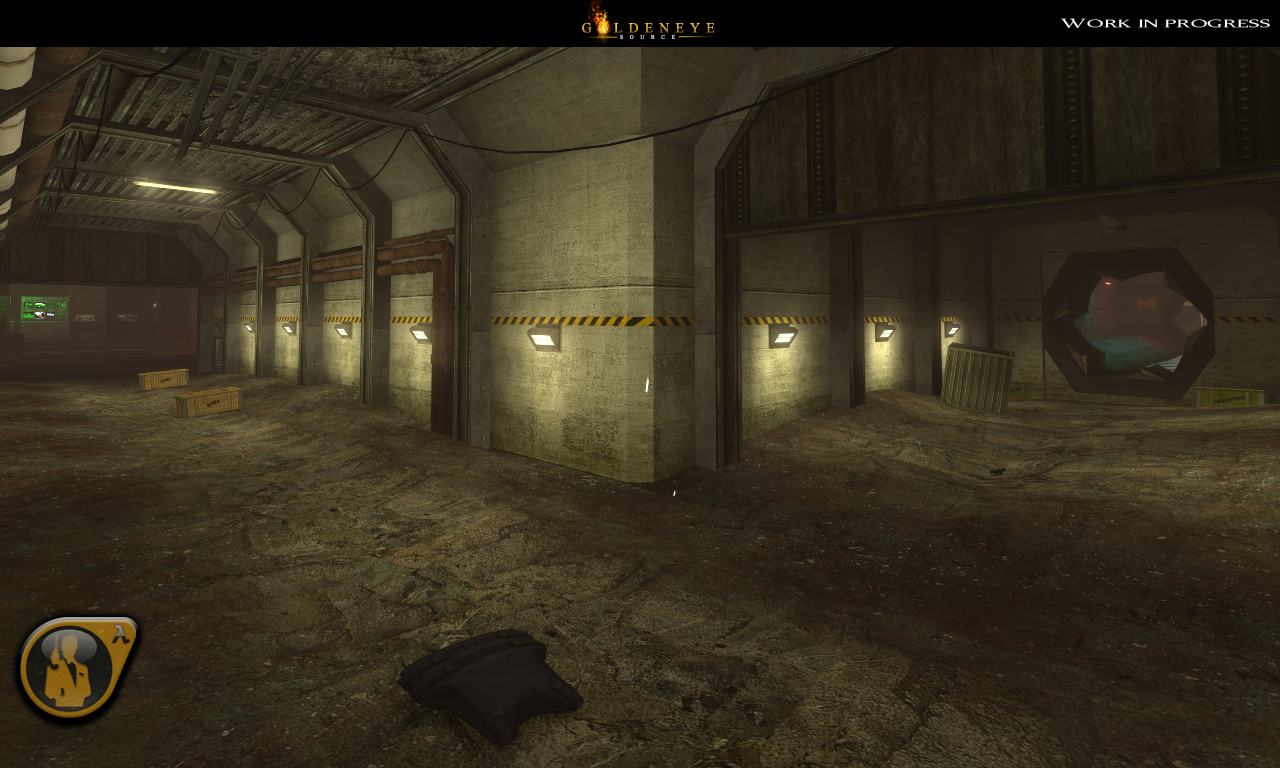 Whaomg!? Yes you read right. I'm sure theres not a fan out there that hasn't wanted this nostalgic wonder for quite some time, and the code was put in place before beta 3 came out ; However it was rightly deemed we should not rush it, but rather finely tune the bugs that came up and hone the particle and overall visual aspects before allowing it to our playing public. If you are wondering, It's damage value and radius are similar to the n64 instance.

The fireball is laced with all the goodies, such as, debris and a smoke filled air for a period after the fire clears. It also visually reflects the same way as in the n64 counterpart ; when you detonate or launch an explosive near a wall for example, the other side of the wall (if another room for example) will experience the fireball . Also to note, even props that explode will be rolling explosions! 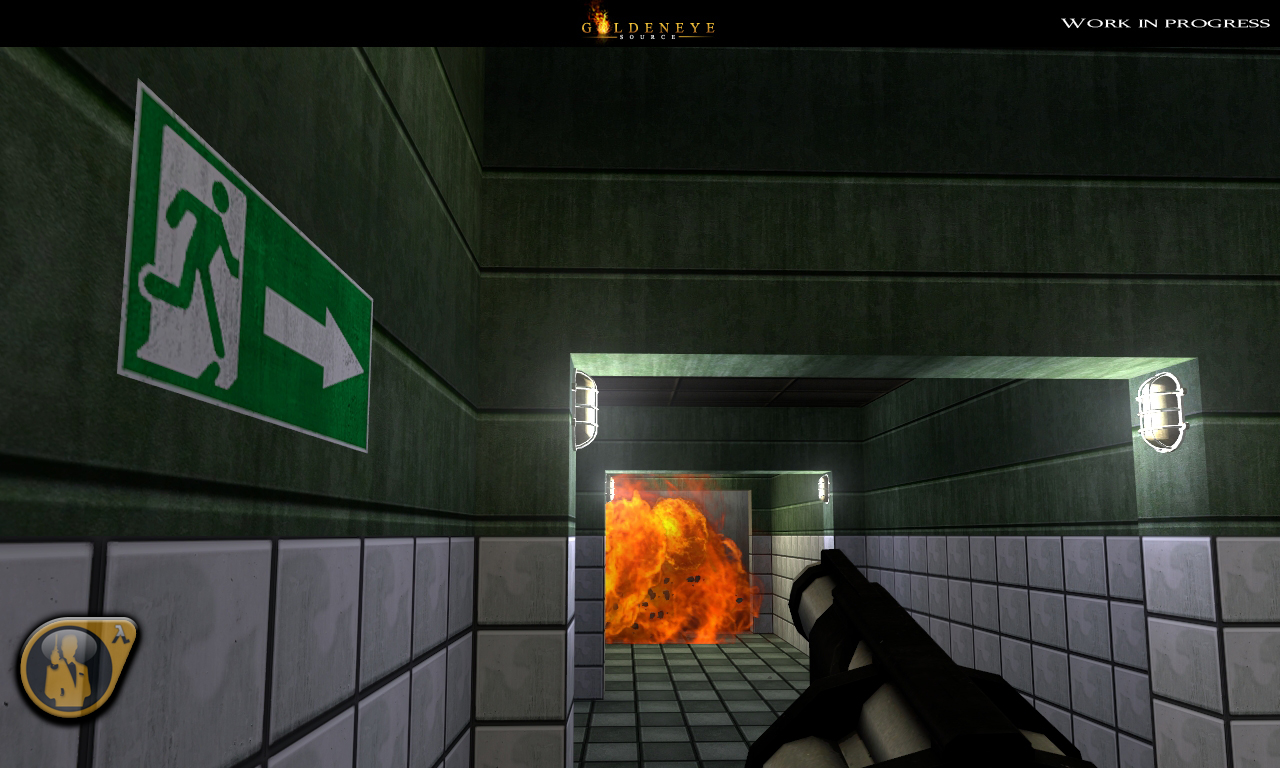 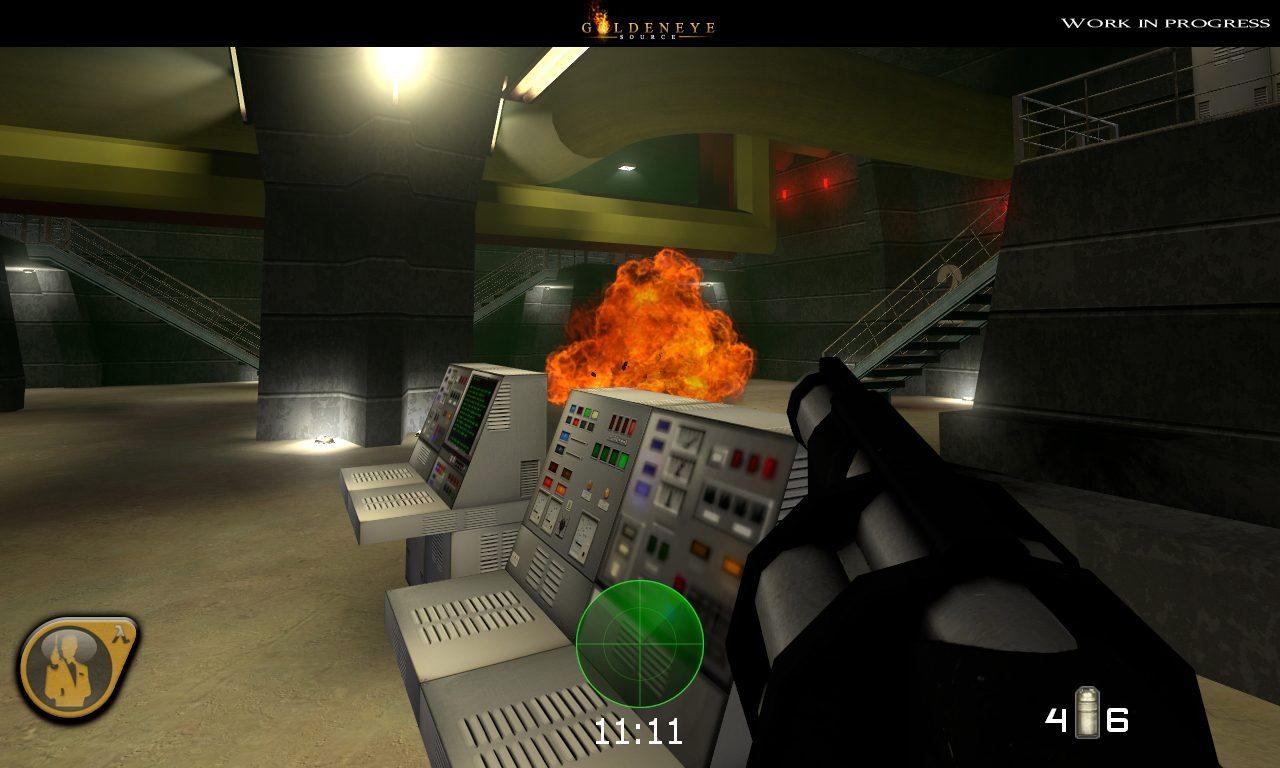 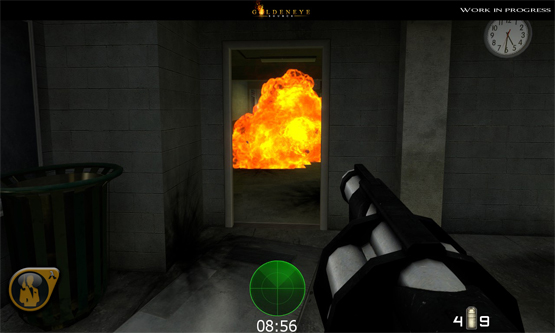 This weapon has just this week undergone tweaks and fixes for it's induction into full blown testing, the code is all working and the reload animation looks 5 star and release ready.

Speaking of animations, with the addition of The SSL to the developer list, we have in conjunction with KillerMonkey, been able to revamp our idle and fire animations for the characters. This marks a big leap in our goal for a unique look away from HL2 style, and more towards goldeneye64.

To find out more about these developments, plus more screens than moddb should handle, head to our complete update!

Next update : The possibility of a teaser video for beta 4, which will include visuals of rolling explosions seen above! Plus more screens from artwork, namely a new character for MI6 about to go in game. Finally, continuing to show new levels slated for release, this time from Viashino Cutthroat who is a savage beast of classic's perfection. Thanks Moddb for viewing our work and your support is appreciated!

We want to mention one last thing. Big thanks goes to the folks who make Wing IDE. Wingware have provided us with a free license for their Python debug technology, which mentioned above is used for our gameplay modes and other features. Wingware.com

Remember, our forums and website are always welcome places to hang out, support us and find more!

Very solid update, high quality maps, keep it up, look forward to your next release ^^

sorry for the delay in the link to our forums! Its up now as of right this minute. Thanks moddb! Enjoy the full update via link in this news post :)

Looking good guys. Some nice progress overall on the mod, caverns looks great. It's good to see that all these quiet months have been spent working hard to perfect the game.

you guys are AWESOME, for keepin' this classic game alive, obsessed with details... thats the way it should be done! *teamhug* ;)

EPIC! Everything is looking great. Can't wait to play the next update!

Great update, excited for the next release.
Love this mod!

This mod is fantastic! I wonder if we'll ever see a coop gamemode now that you mentioned that you are working on AI. That would have been awesome.

Best update ever, loving the movie styled music too!

Awesome update. Just need to order a better computer so I can run this properly after the last major update.

Would love it if a single player could be worked into this mod...

Perhaps in time, though we cannot promise, it is likely we will try continue.

Good to hear that you are at least thinking about it! I realise that there are other priorities at the moment though