The latest on RPG Mode and various other things FXmod as of Summer 2020, fresh from a galaxy near you.

It is warm, it is hot, but between all things going on in the world we are bringing you the (belated) summer edition of this year's semi-annual newsletter. Coming up: An update on where we stand now in regards to various matters FXmod, our plans, and an idea of what is coming in the next release.

Since some weeks we have been taking some trips back to our stomping grounds. The break we gave ourselves after the release of Build 1.37 turned into an extended version as things went awry in the world. It's all still a far stretch from the "normal" we are used to, but life slowly is getting back on its two feet. And so is this little modding project we have going here for Homeworld Remastered.

Let's start start with the news most of you probably want to know hear about. The good news is that yes, we are still working and making progress on RPG Mode. The less fortunate news is that no, we do not have a release date yet. We do however remain committed to delivering a first playable DEMO version with the next big update of the FXmod (Build 1.40), which even in the absolute worst case scenario will leave you with more than enough time to go over all of it well before Homeworld3 hits the shelves.

So, progress. While waiting for some icons and other graphical assets to be completed by another teammember Hw_Lover completed the scripting work for another new core system for RPG Mode just the other day, which he calls the "Diplomacy System". Details will follow in the future, but for now you can think of it as a selectable conversation system. 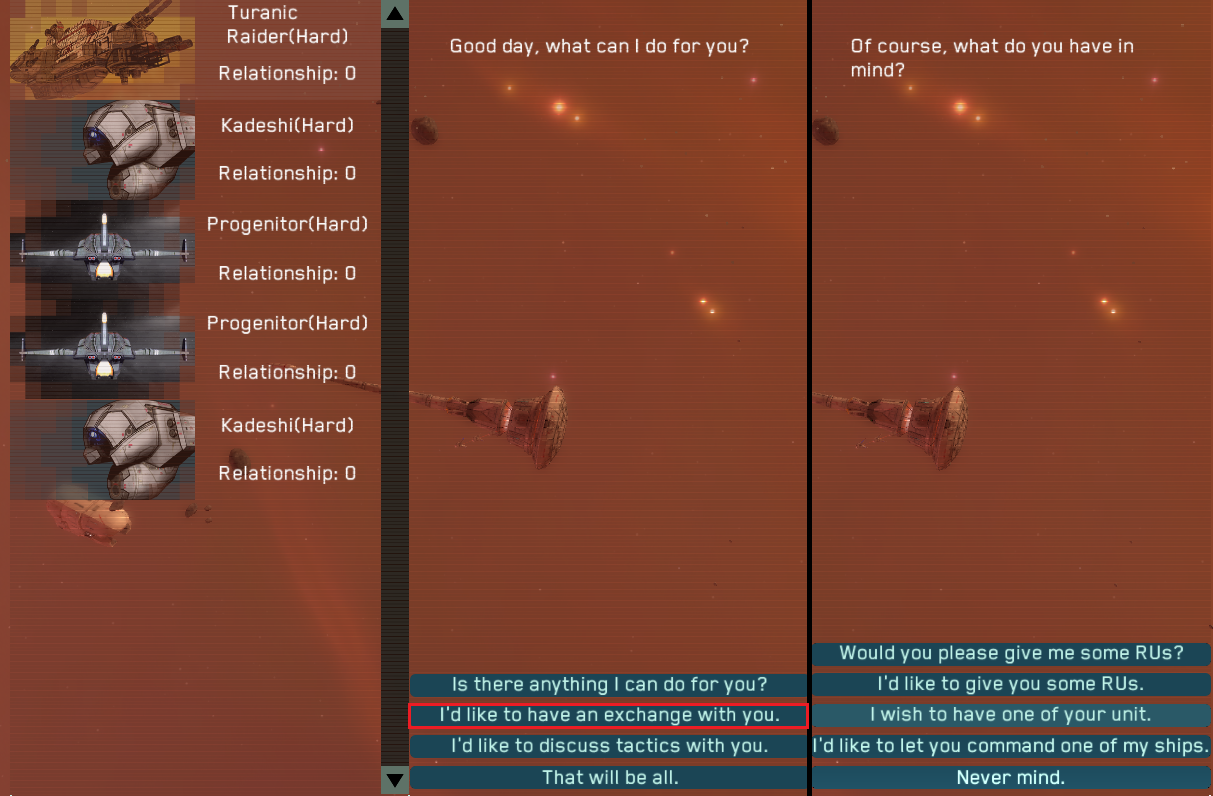 In the above example the new system has been used to recreate the "Diplomacy" system that is exclusively found in Homeworld's Multiplayer (human players are able to transfer ships/RUs to each other or fellow AIs in online matches) and add it to Player vs. CPU mode for the first time. The result is that players can now "interact" with AIs as they would with players.

For example, you can transfer ships/RUs as you are used to. But among the new options are requesting RUs or control over certain ships, requesting strikes/raids (think like the map "ping" system in Sins of a Solar Empire, if you ever played that), or other options. The things an AI can or will do for you increases with your relationship. In terms of RPG Mode, maybe you can envision clicking on an unit like a Shipyard or other NPC, and seeing options like 1: Dialogue, 2: Quests (take/accept quests), 3: Trading (opens the trade system tab, if the unit can trade)...

The example application of the new system you see above (adding a Diplomacy system for Player vs. CPU) will be available in the next build for you to try out and play around with.

While we continue to work towards the ultimate goal that is releasing a playable version of RPG Mode, we also have been returning to the mod itself during those moments we cannot proceed because we have to wait. Although 1.37 was supposed to be the final release in the 1.3X series before the "big" 1.40 update, the prospect of an endless hiatus until it is ready wasn't too appealing to us either - and sure everyone could use a little bit of good news or something to look forward to after recent events.

As such, we decided to aim for one or two more "mini" releases in the 1.3X series. With these releases we hope to implement the 5th and 6th Mini-campaigns (Taiidan & Progenitors), at which point all six main races in the FXmod will have their mini-campaign implemented before the grand RPG Mode update.

The concept for the Taiidan mini-campaign, which is in the works first, is provided below.

With the Vaygr leaderless and disorganized after the events of Homeworld2, the Taiidan wasted no time in announcing their secession from their former subjugators. Having meticulously prepared for this moment, multiple full-scale assaults were launched on key Vaygr locations within former Imperial space. Within weeks, the old Empire was beginning to take shape again.

In GSY 9625 the Vaygr have been nearly completely pushed out. The fleeing, leftover Vaygr forces make a desperate last stand in the narrow Vishari Corridor, one of the two key passageways connecting Vaygr and Imperial space. An elite Taiidan fleet utilizing a new prototype new unit is dispatched to break the siege and push the Vaygr out of Imperial space once and for in what would come to be known as the famous Battle of Vishari.

One of the other big things that we were able to do is hinted at in this newsletter's thumbnail image. This was a frequently requested change by players of the FXmod, and so we are happy to finally be able to deliver on it: fleet color support for the Kadeshi. Imposing black Needleships, Taiidan-esque Multi-Beam Frigates or many other flavors of Kadeshi ships and fleets may now roam the galaxy. 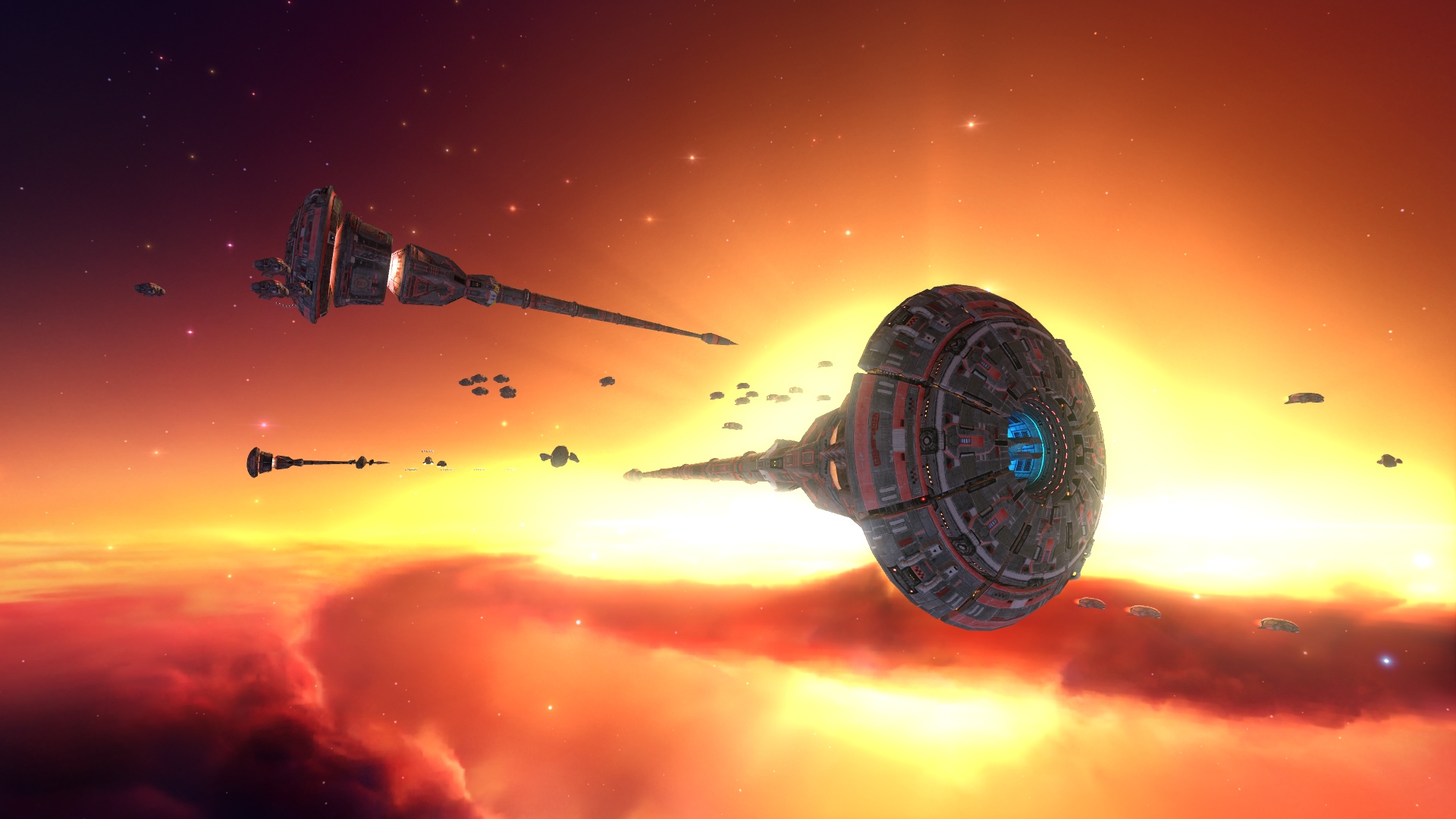 In the next update, your Kadeshi fleets will now truly fly your colors.

Plans for the Future

In the next few weeks we will be posting a guide that lists all of the FXmod's features on our ModDB page here, similar to our FX Strategy Guide post. As we get further and further into development it is easy to lose track of all the features we have added to the mod, so we want to create a reference work of sorts for new and existing players to the mod.

We also hope to do commemorate Homeworld's 21st anniversary next month with either next RPG Mode Newsletter or maybe a special beta release of the next update, should we finish the Taiidan mini-campaign in time.

Until then you will be able to catch us on the FXmod's Discord for behind-the-screens sneakpeak updates, any questions you may have, a variety of tips and guides on FXmod content, or just an occasional Homeworld-related chat. Feel free to drop by!

Until the next time,
-WH