Since our most recent screenshot had the new NS2 pistol in it we thought it would be appropriate to put together a blog showcasing the weapons that a TSA Marine can't leave home without: their trusty backup weapon and their melee weapon.

Posted by TychoCelchuuu on Mar 6th, 2010

Since our most recent screenshot had the new NS2 pistol in it we thought it would be appropriate to put together a blog showcasing the weapons that a TSA Marine can't leave home without: their trusty backup weapon and their melee weapon.

Combat Pistol
First up is the Combat Pistol. We wanted to go for a compact yet powerful look, with some visual cues reminiscent of the original NS1 pistol. During the initial concept phase a collection of quick thumbnail sketches were produced, exploring a variety of styles.

As part of our behind the scenes approach that we like to take with our community we released this image to the public and solicited feedback. As is often the case, none of the thumbnails were working perfectly, but internally we picked #6, which we felt was the best base to start with as a jumping off point, since it possessed many of the elements we were looking for in the pistol. It was visually distinct, and felt like an appropriate backup weapon, not a whimpy pea shooter but also not some powerful hand cannon that some of the other designs hinted at. We checked our decision with the community pistol poll, and found that #6 seemed to be in the top running among the public as well, so we felt that we were going in the right direction.

As you can see the final design combined aspects of the other sketches that we felt were working well, such as the grip from #8 and the ribbed front end that was distinctive to the original NS1 pistol. 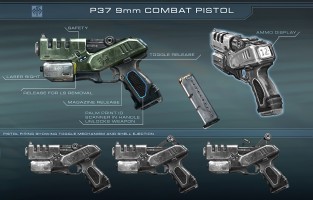 Further design refinements were made, adding details as well as resolving some of the shapes to work better. One of the big design additions during this stage was to add the Luger style toggle mechanism.

While we had chosen the pistol with the more distinctive slanted back half, this posed problems in the believable functionality of the weapon. Since the pistol is firing standard ammunition, an empty shell needs to be ejected and a new one chambered with each shot, and the angled design, as well as the ammo counter screen on the back, made incorporating the typical slide mechanism present on most modern day pistols very problematic. The solution was to take the mechanical workings of a WW2 Luger and merge them with the futuristic pistol design, and this combination of old and new not only added the real world functionality we were looking for, but also a distinctive visual look that makes for interesting animation and is cohesive with many of the mechanical elements on the marine structures and equipment. 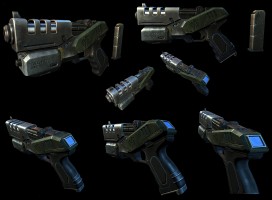 2.Sec Switch-Ax
Next up is the new melee weapon. When all else fails, and it comes down to hand to claws combat, what better to have in your possession then the new combat approved 2.Sec Switch-Ax? 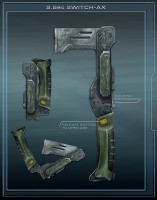 To better describe this new and improved melee weapon, we've taken an excerpt from the TSA Field Manual:

The 2.Sec Switch-Ax
The Switch-Ax has replaced the knife as standard issue. Nomenclature "2.Sec" describes the elapsed time from deployment to burying it in someone's (or thing's) cranium. Some marines have also said the sound it makes from button push to lock sounds like "two...Sec!" In compact form, the blade's edge folds into a nanoscopic substratum which converts matter debris into an oily substance. The 2.Sec never sticks -- in fact, the more you use it, the better it works. The blade's edge is very slowly consumed as well. It's getting sharper while it hangs from your belt.

The 2.Sec was deployed after field data confirmed two things:

1. Non-Combat tasks, especially time-critical ones, usually involve severing materials just at or over the knife's capabilities, or opening jammed or locked containers -- a function that can easily result in damage to a knife. The Switch-Ax is rated to cut steel cable, and makes short work of the standard shipping or storage crates. The Ax's edge is still sharp enough to friction-cut lesser substances such as cloth or rope with sufficient precision for commonly reported tasks.

2. Most combat uses are against Kharaa, who are tough skinned, and frequently biologically armored in ways that grant high resistance to surface wounds. While the Switch-Ax cannot deliver successive strikes as quickly as the knife, its first blow is of comparable speed, and the piercing, weight driven concentration of force delivers greater aggregate damage-per-second against alien hostiles. Of course, melee combat with the Kharaa is still strongly discouraged. The 2.Sec, however, is superbly effective against Kharaa tactical growths, quickly hacking past the fibrous flesh to pulp sensitive internal organs. This may be its most popular use in the field. 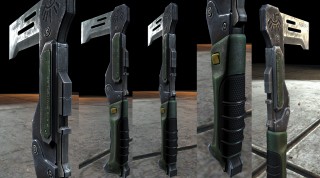 Finally, here's what the axe looks like in game: 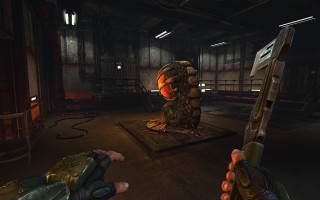 We hope you've enjoyed this glimpse into the marine's arsenal! Please let us know what you think.
Comment on this
Comments

SO GOOD!
ITS MOVING FORWARD AND BACKWARD! That guy has a really hot move!

That's what I thought when I saw the jointed arm lock!

Kewl. I liked the pistol designs.

Just what I had in mind o_o

omg that pistol is sold through steam!!! :)

Really digging the new weapons but some concerns that I have for the pistol. The slanted angle doesn't really pose a big enough problem to excuse the arm for shell ejection which is somewhat of an eye sore, would be easy to jam in numerous situations, and could pose serious harm to it's user. The angle also suggests that when held comfortably the barrel would always point up at an angle. The design is nice but even with the much love visible moving parts I think it might be best to go back over the design to blend game-play, visuals, and realism.

awesome! nothing more to say! :)

the axe is just so damn sexy! :D

its hold the same way as the knife in NS1.I LIKE IT

My senses tell me that NS2 will be released somewhere in May-June.