May 31st, Project Brazil celebrated 2 years of being live on the internet. Like last month, storyline progress as been made that isn't directly visual, like scripts and quest design from RickerHK and Seddon, or dialogue editing from NoNoodles, Mark, and I, which we can't exactly show you without spoilers. But we also have a ton of 3D art from Tau34RUS, Dragbody, Camboy, and myself.

Camboy & Gabi have helped us create more character refinement to our Companions and Heroes. Take a look at these outstanding works of art, which you can also view on our fan-maintained wikia admined by Benedikt! 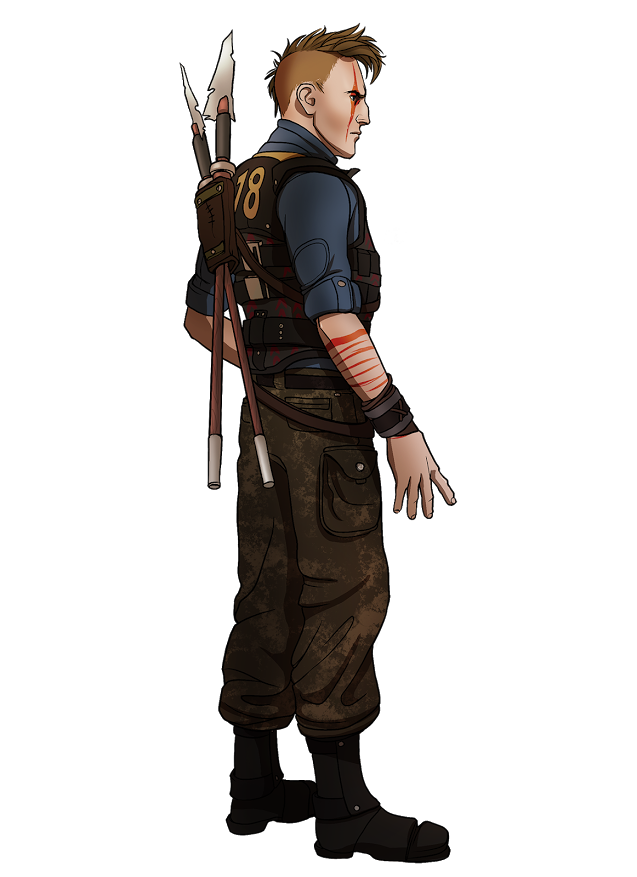 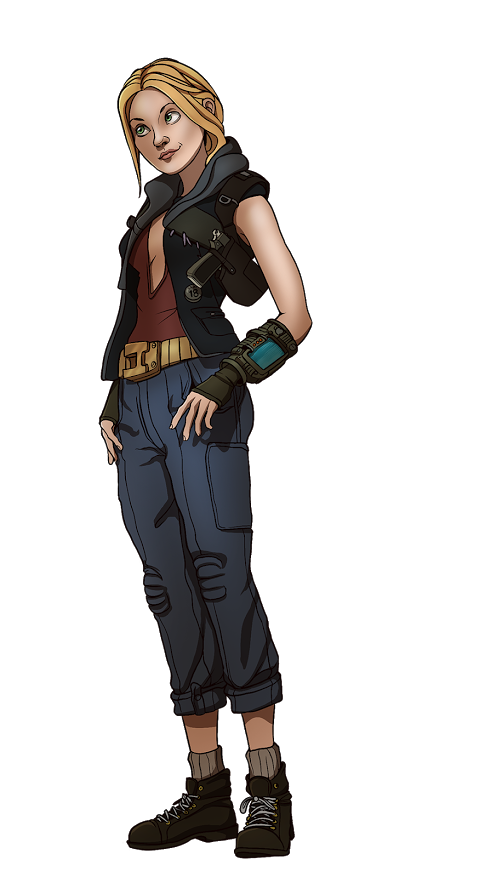 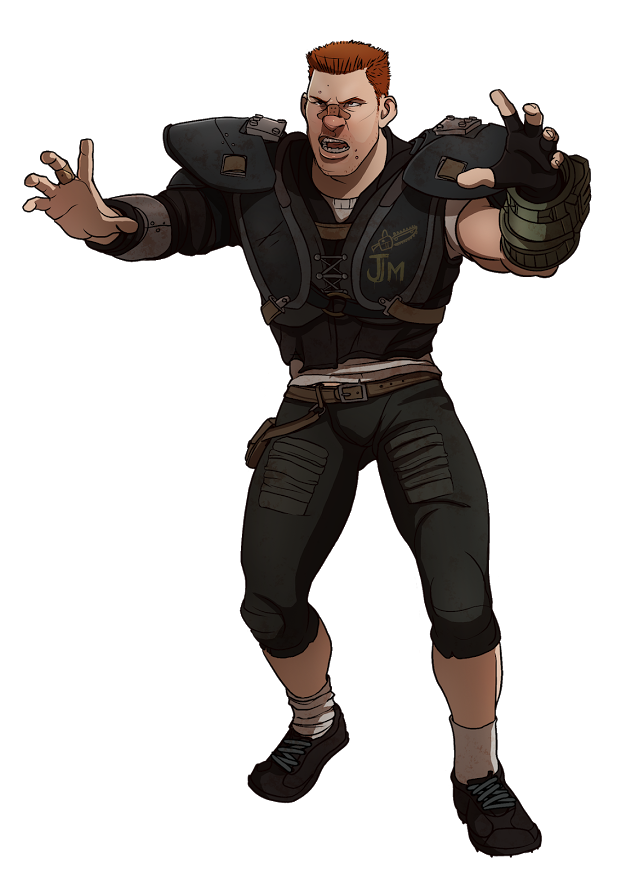 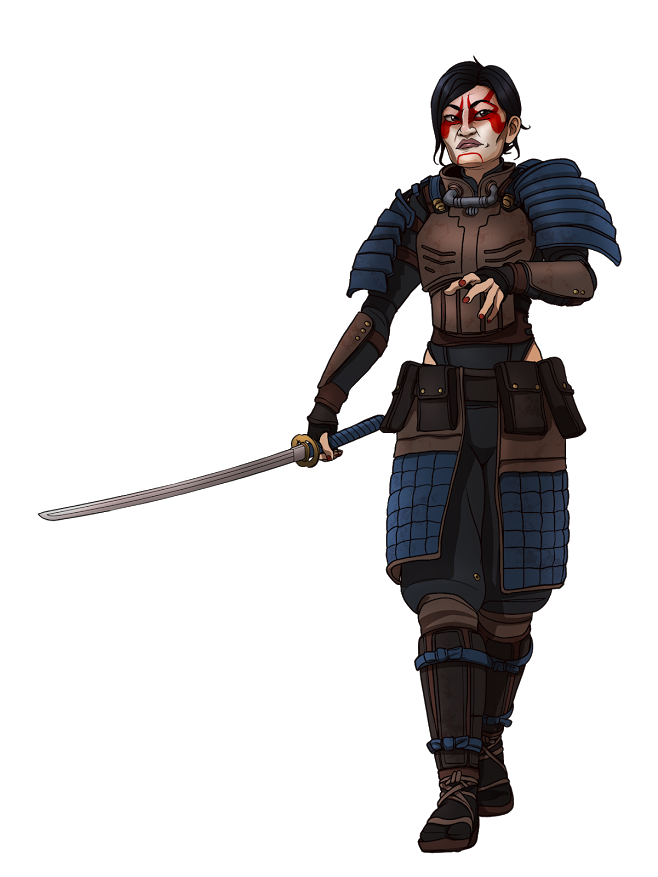 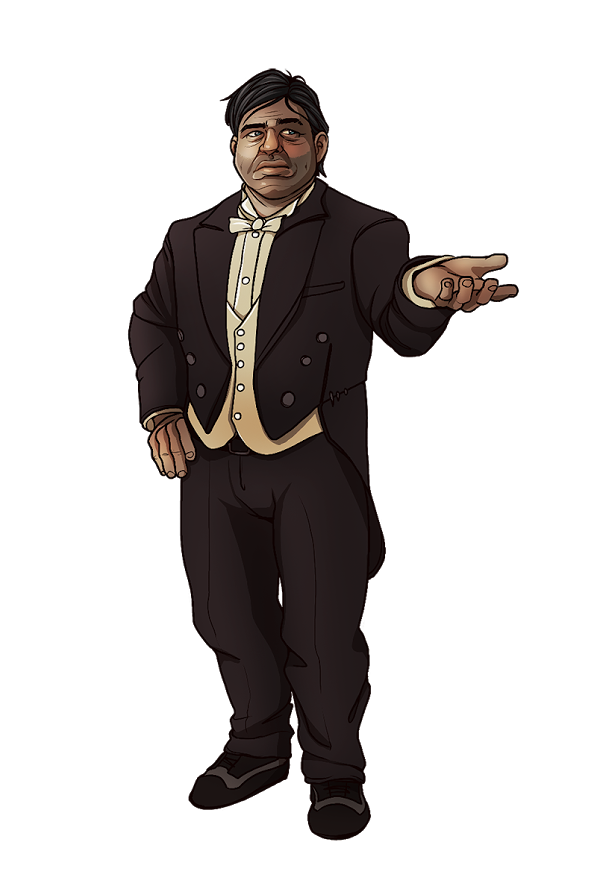 All of these cool characters will be fully fleshed out NPCs in F: PB's lore friendly storyline. Their amours, faces, and weapons shown here are all going to be available in game as well. 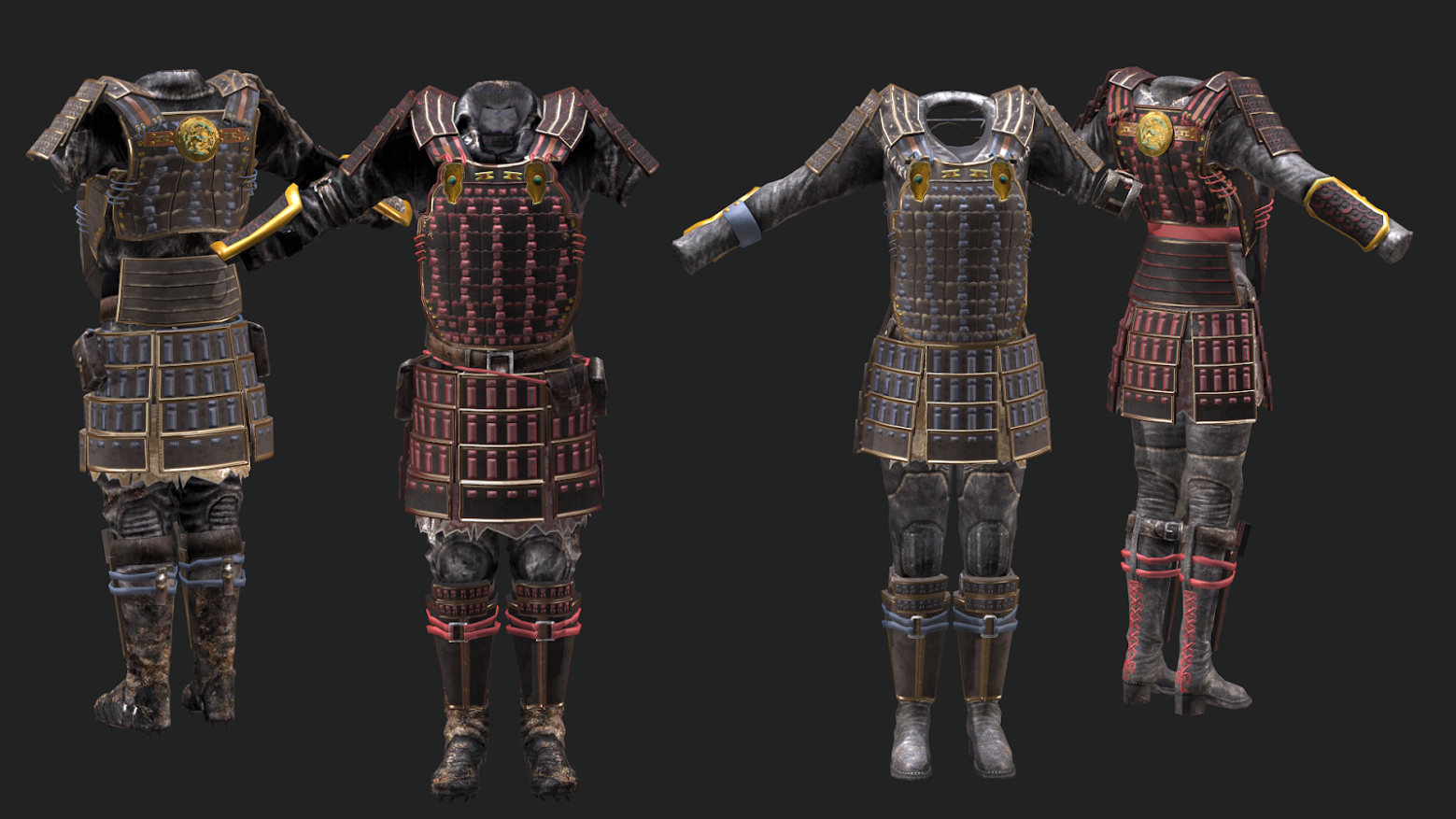 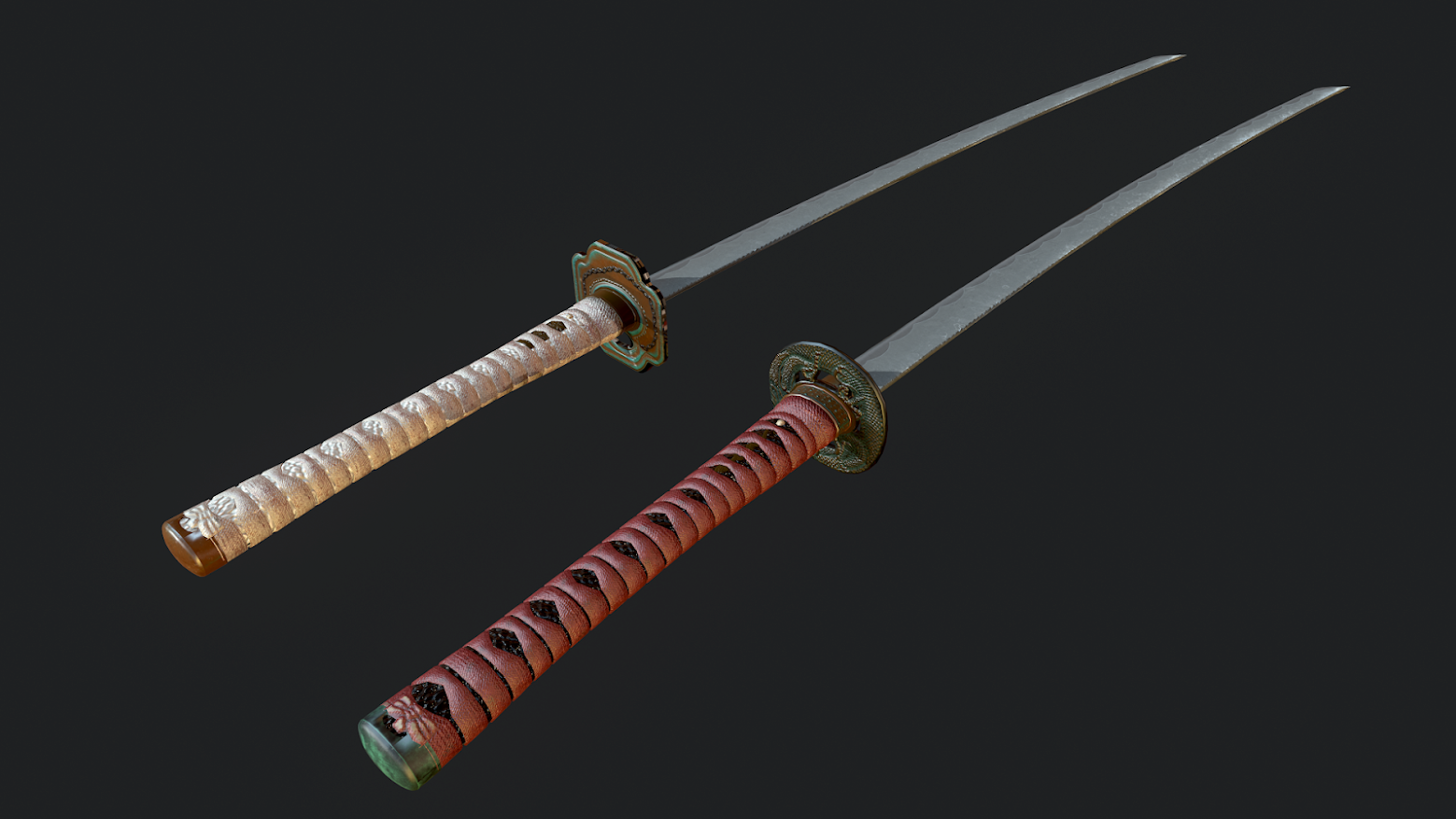 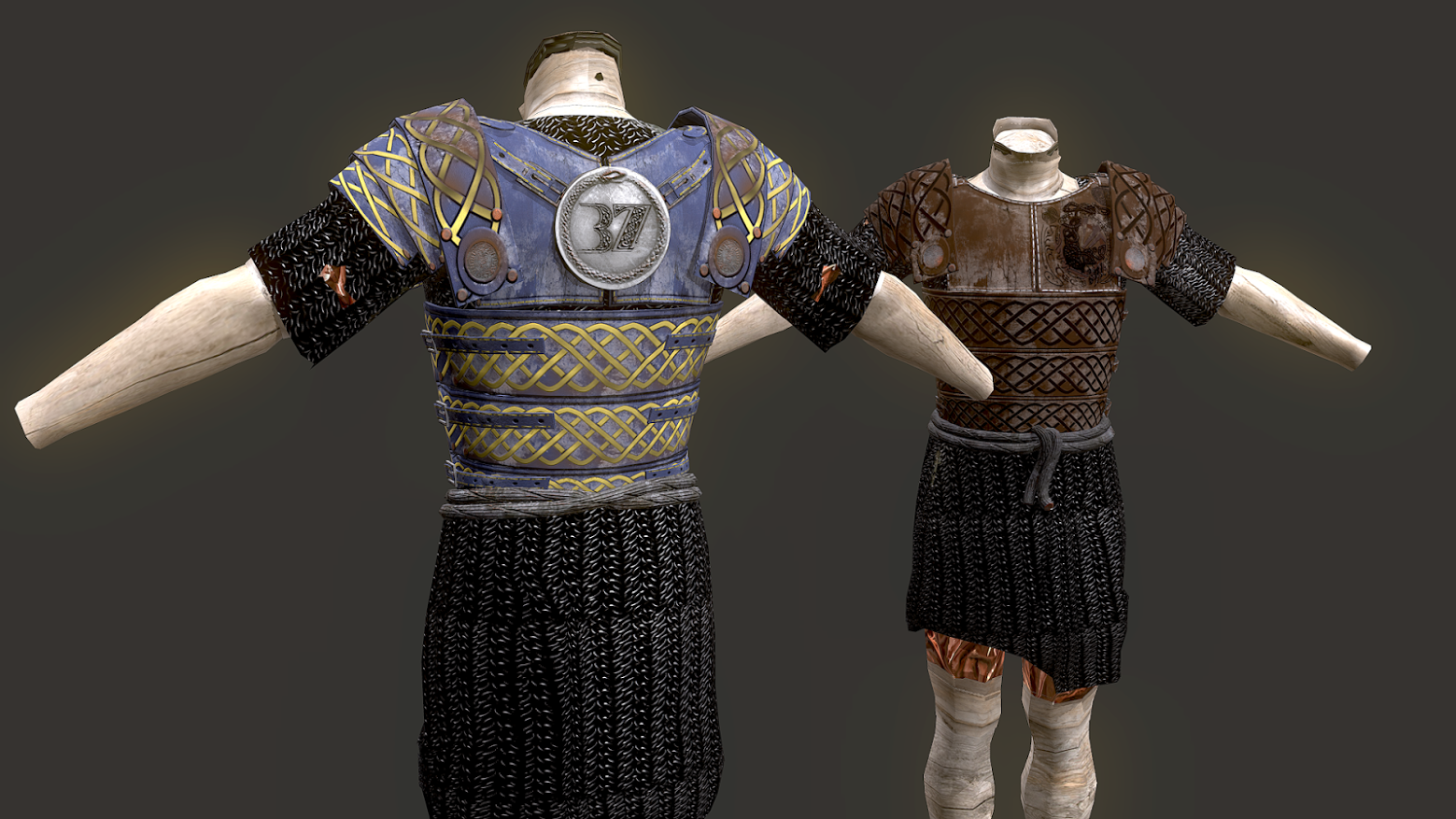 Elite Vault Viking Armour, for all your Society of Wasteland Anachronism Needs. 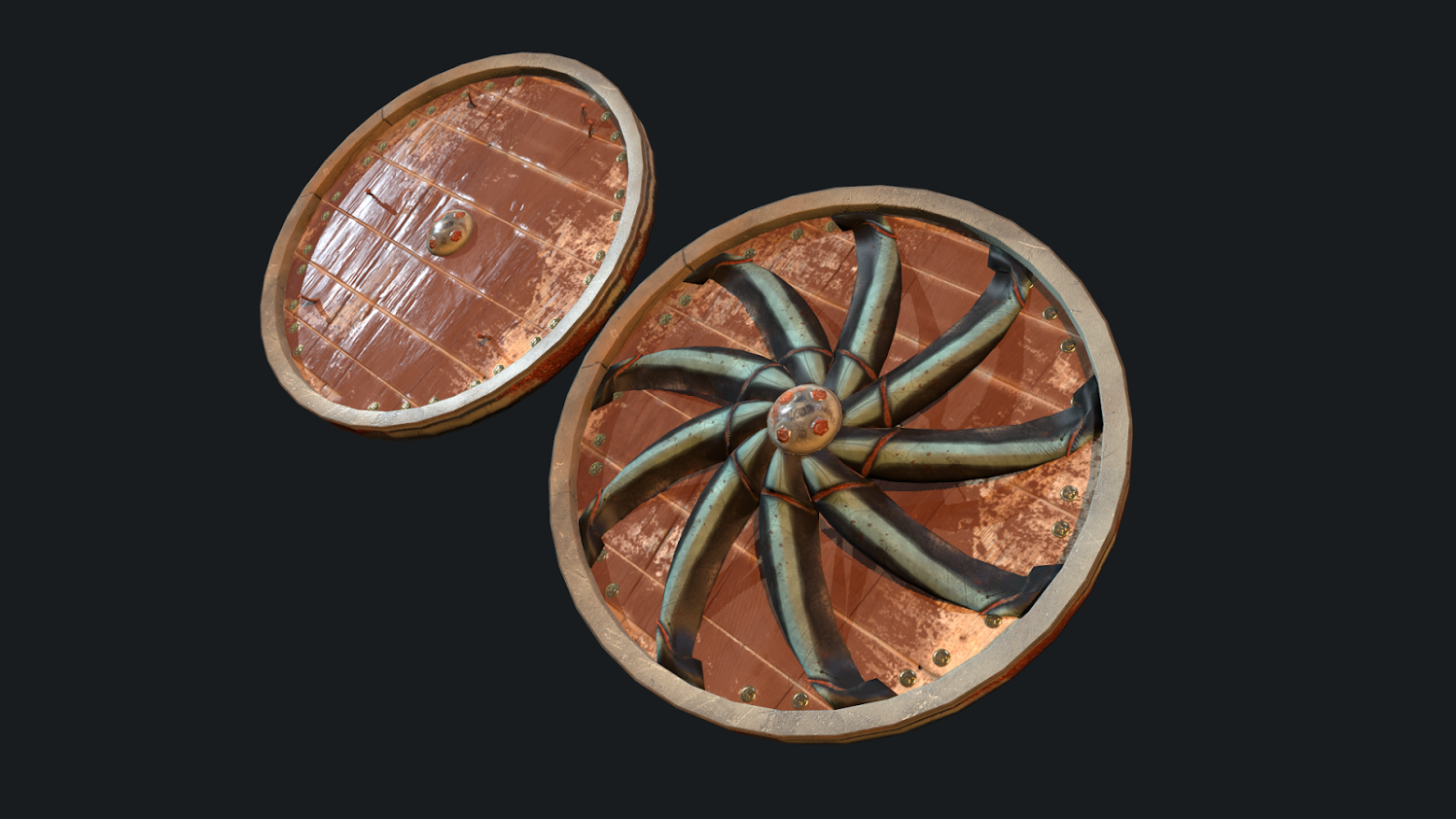 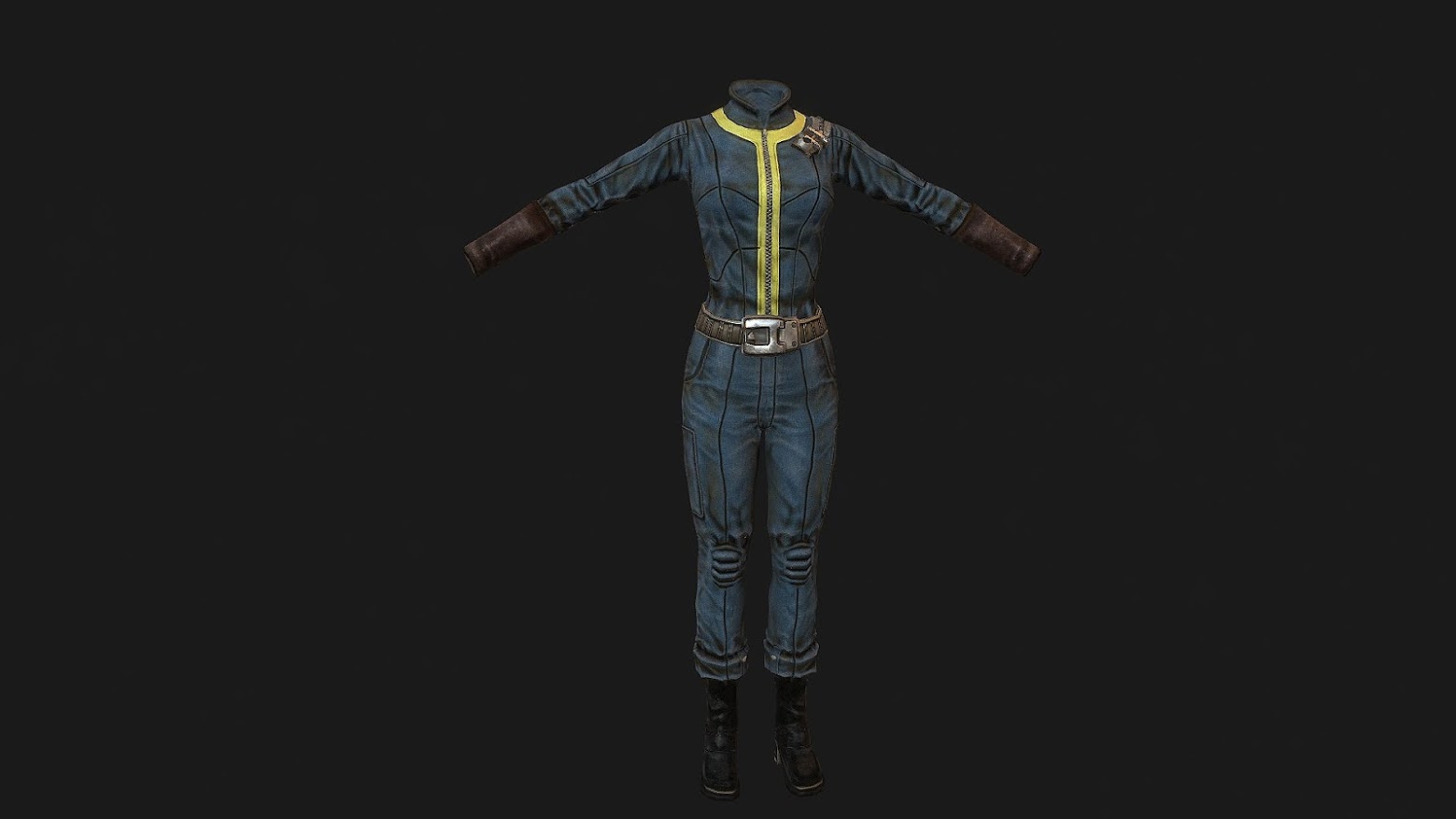 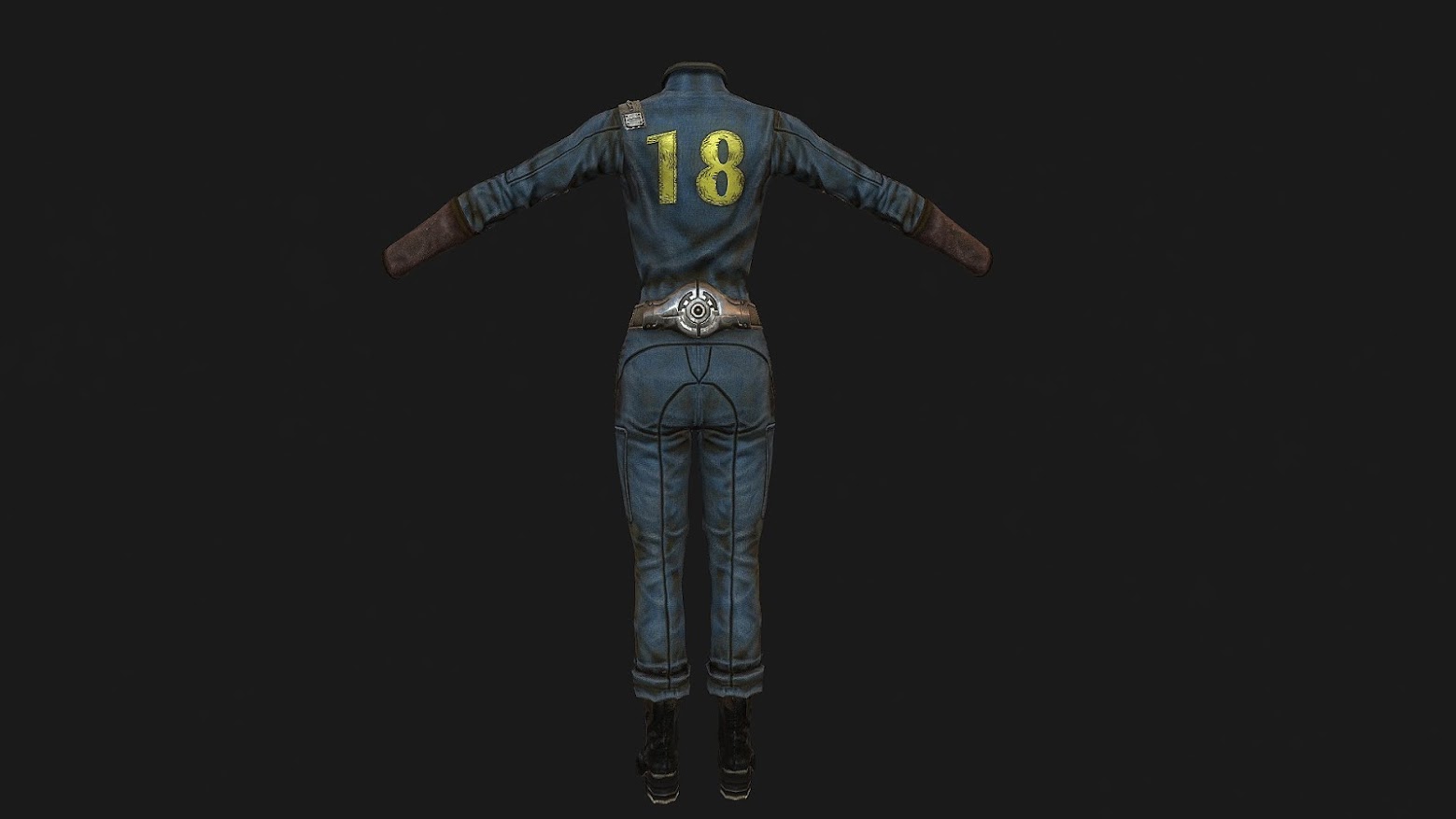 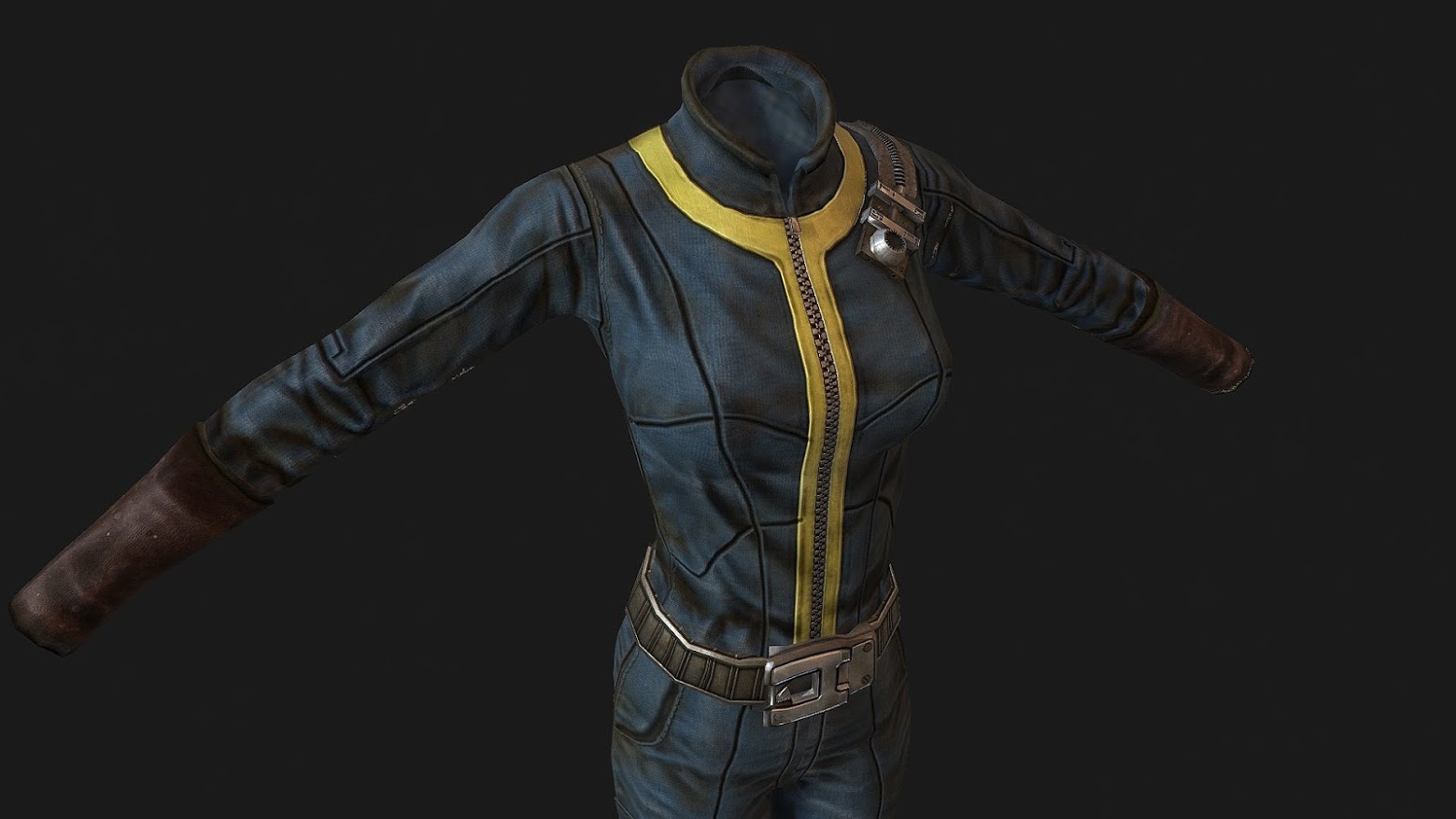 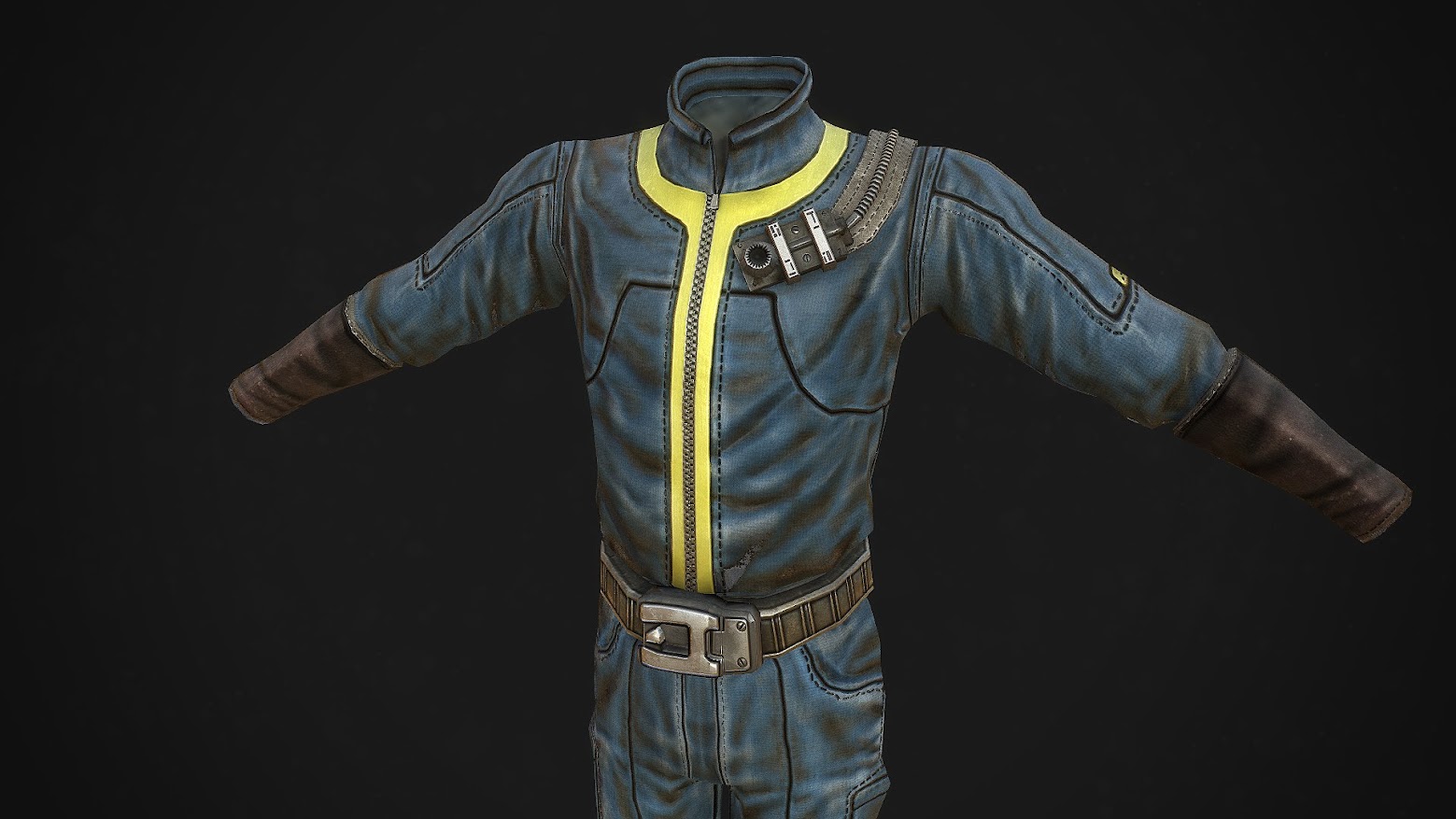 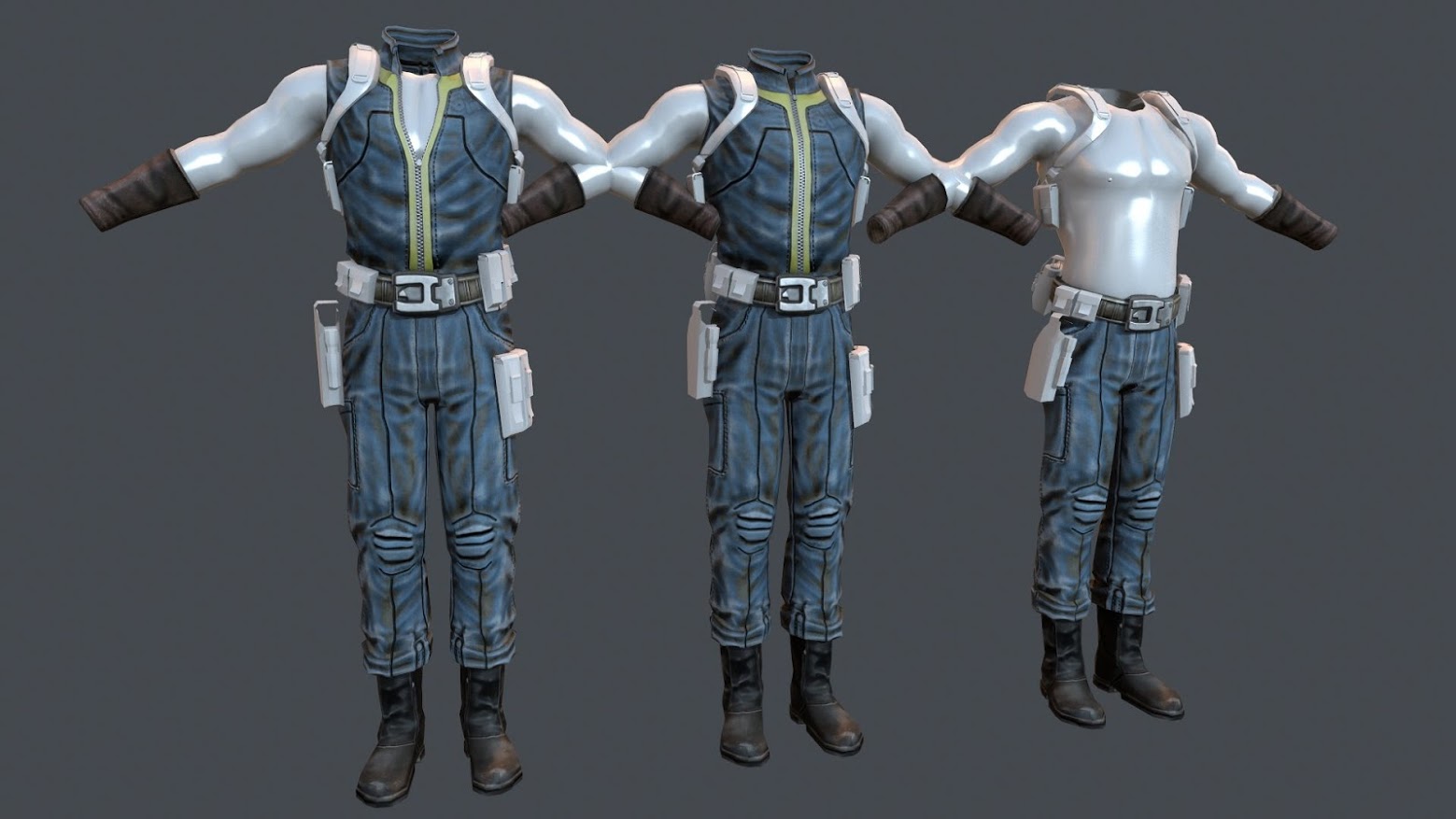 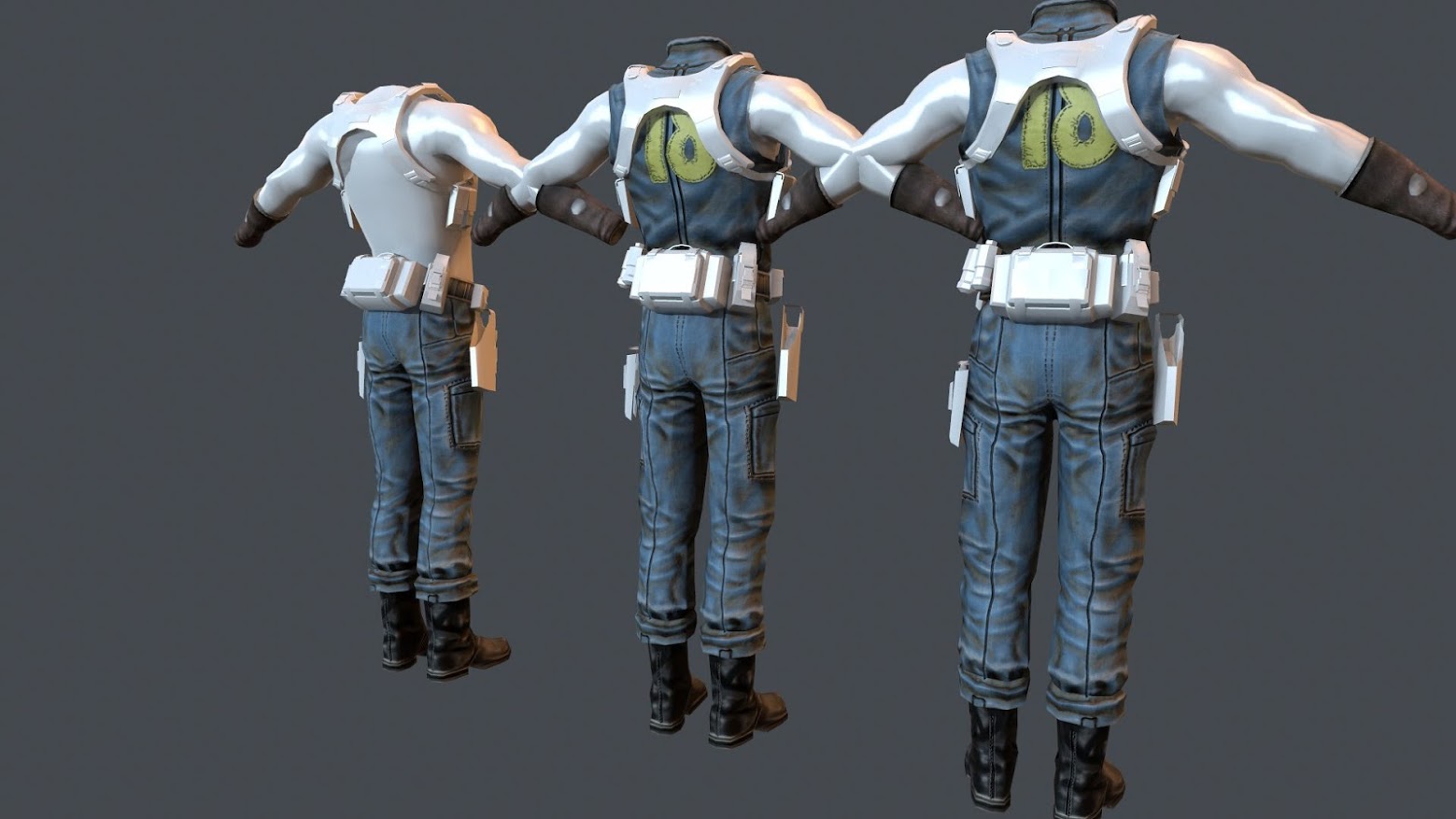 There's actually a lot more than this, but this news post is long enough! XD

If you're saying to yourself - damn! These look like they'd be at home on Fallout 4! Well, you'd be right. :p All of these are designed with a modular system in mind and created with PBR textures (saved as last-gen DDS files for GECK,) meaning when we get our hands on the F4GECK, we can rapidly implement these according to the same dynamic system you can watch here in this E3 footage. Because I am a modular fanatic. I might keep an arcane sacrificial alter to Joel Burgess.

If you still think PBR is something your mom gives you on Rye, let me show you: 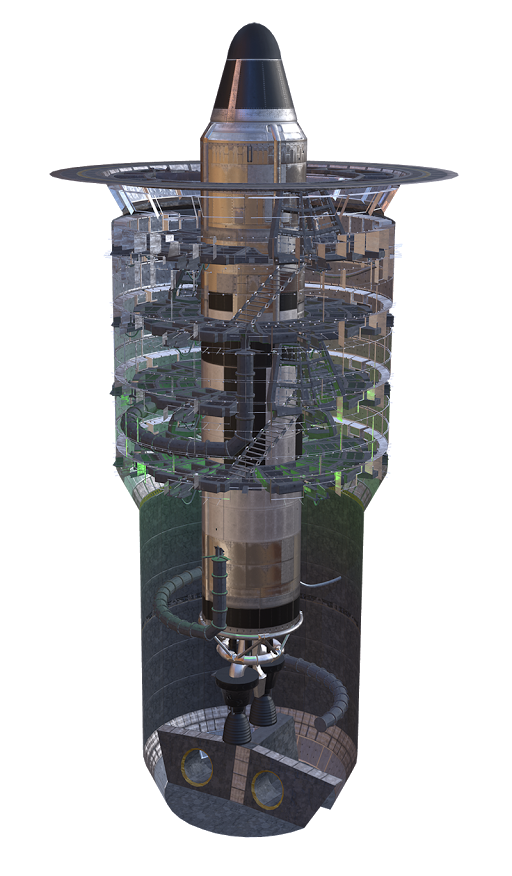 Physically Based Rendering is a scene lighting method that attempts to accurately replicate real world reflectance values. The difference is night and day, and according to Fallout 4's E3 coverage, I'm fully trained in all the tools they used to make the art assets for F4 - in fact, I've been using them to make FPB's new levels & art, saving a copy as PBR (you know, just in case F4 ever came out) and a copy for the GECK.

As you can imagine this is taking a long time to implement and create. With Fallout 4 now announced for November 11th, 2015, we are on the fast track to finishing this Mega Mod, and we're committed to doing it for New Vegas. 4 years of work has locked us into this groove. We'll always be a New Vegas game. There's no hope of porting it over, and doing another 4 years on the mod would kill us.

You can read some of our thoughts from me on this Kotaku Interview.

We're aiming to release before Fallout 4; but, we reserve the right to miss that date, if, we decide that it's not ready to leave the nest. We don't release broke shit.

Nathan contacted me on Facebook for an off the cuff interview last week. In it I laid out our general plans for attacking Part 2 Development.

Each month from now to October, we will be finishing a quest with RickerHK, Seddon, and Richard. Our friend NoNoodles is going to be coming in to assist us with filling in the empty wasteland with minor NPCs, and I'm begging Jokerine from Boom to the Moon and Black Mesa to drop by the help us decorate some of our still very vanilla looking ghost towns. I mean, they're supposed to be abandoned ghost towns in raider country. :p But still, they need some decoration besides Raiders. Jokerine is the best modder to help with that.

For the curious, this is our Main Quest Timeline that shows how time passes during the two main quest threads. It also shows our remaining quests to implement. 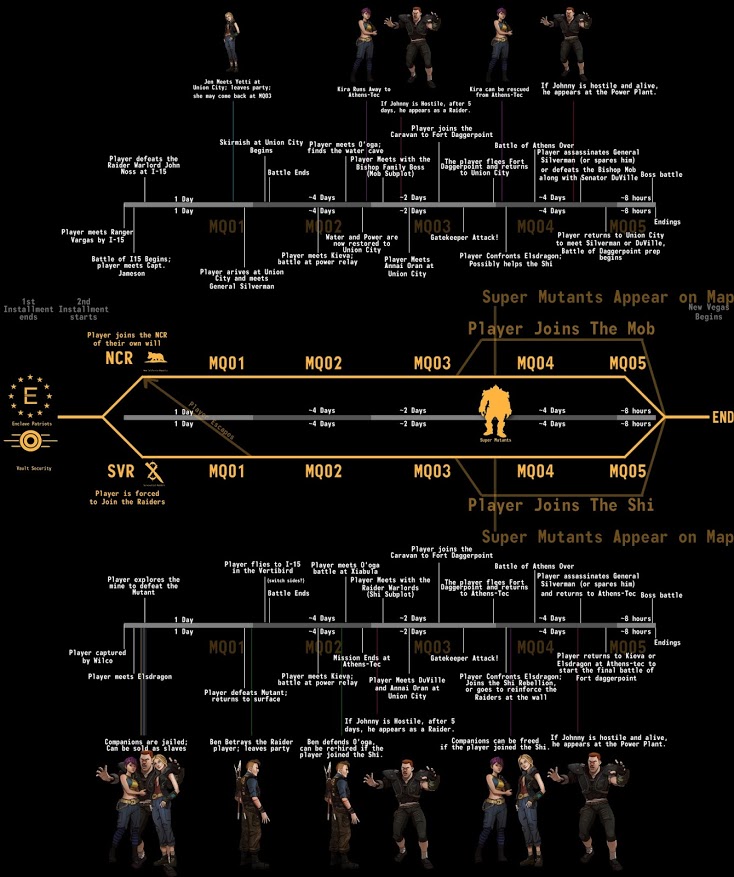 Where we are in this timeline is a bit of a scatter shot. There is a ton more to this chart than how simple I made it look. Off to the left is the knot of A Night in Pinehaven (the legendary quest that has stumped so many of you when it was still a Work in Progress placeholder in the 131 wasteland.) ANIP is now done, and Lost Roads, which you can see here as the stick leading into the first branch, is now done as of this week.

With the new armours done, and the new wasteland elements going in from me, we are at ~85% complete in the new visual art category. Story wise? 35%.

Voice acting is going to be Hell Month. :p starting October 11th, we have our first voice actor returning to join us, flying in from Spain just for us. We have an 5 1/2 hour recording session booked at the studio. Each companion has 4 hours of voiced dialogue. 4 of our Main Quest heroes: Silverman, Elsdragon, DuVille, and Kieva, have 10 hours booked to record.

Needless to say, all of this dialogue is being recorded live, in person. I only plan on using 2 actors from the internet, recording remotely without direction. (You don't have to send in your resume or beg me to voice act. :p I've got it covered. I'm doing it all local.)

That's a long haul in 5 months time, but with our volunteers newly invigorated, we're seeing much better progress. Still a lot slower than I'd like, but we all have day jobs. >_ < The curse of indie and mod development. I can't wait until one day we can do this full time as our real, only job. Making an income, meeting deadlines, finding investors all that ball busting labour dedicated to one goal.

Next Month, I plan on having a new video to show you with these new 3D assets full implemented, and some of our first batch of new voice acting. We might even do another interview if asked.

You can read about our progress on the Design Documents Found Here. In the mean time, you can keep track of us on ModDB, Fallout Nexus, or Facebook. We've got a thriving online community centred around each one.

Excellent update, thanks for letting us know :)

Nice schematic at the end of the thread, though, isn't there a third path to choose? Like wildcard? Maybe rise your own Vault faction or something?

I thought the Shi were Chinese, or did they merge with the Yakuza that popped up inexplicably outside of New Reno?

That is exactly what happened. In our version of the history, Japan was subsumed by the Chinese Communist Regime, and was forced to participate in the invasion. The Shi Sub had a contingent of Japanese aboard that later went on to become Kieva and her rebels.

Would the majority of the Chinese Shi have assimilated into the NCR? I thought that was implied in New Vegas with all the NCR characters of Chinese descent and NCR Vertibird technology.

Dang, from the sound of it it seems you guys aren't even at the 1/3 mark, you guys are are gonna need to get into overdrive and stay there if you wanna make that deadline..time passes by faster when you give yourself one of those xP

Also, is the reason why Jamie/Eric Campbell aren't on the chart a story thing or were they cut for time's sake? o:

They've been modified! Still there, but they have a new paint job and direction.

I don't think we have time, but there are some hints in there. :p

As always, what a great work you deliver again.
(guess you are also very excited about the new Fallout that will be released?)

Excited, but also stressed by. :p

That last gen rendering to the PBR rendering imo is a little misleading, what makes Fallout 3 NV look like that, is the prevalent brown color pallet, it would be easy to replicate ALMOST exactly the PBR look, using of course a much richer color pallet, good normal maps and specular maps, PBR systems makes it easier to make realistic materials, but in no way it means it would be impossible using the older non PBR way.

Good. I finished my first walkthrough and want to describe my impressions of game. This, by the way, was NKR campaign with transition to Shi. I specifically write here to have at least some hope of a response.

First of all, I apologize in advance for my disgusting English, this is not my native language, and so on, you know everything...

Second is that I really liked modification. True. It is extremely atmospheric and there are a lot of good things in it, but I can’t say everything positively.

First, modification is pretty buggy. I was faced with a situation where the game flew steadily when trying to make a quick move. In addition, there are a lot of places where you can look under textures, fall through them, or objects just hang in air, which greatly destroys atmosphere. In some places, just a hole in void.

Also, I want to say that mod feels empty. There is no illusion of life in it. In Vault 18 there should be a vaultball team, those who will become patriots, but where are they? Where are usual residents of wault, except for those three and a half friendsand security? Why are there so few ordinary people on ranch and in Union City, why are all houses just empty? Or is it planned to add to official release of modification?

By the way, this also applies to many locations, since a significant part of them is empty, and we simply cannot do anything there, sometimes there is not even a NPC. I speak exclusively on my own behalf - but it was interesting for me to peel off each terminal in search of information about this world. Get records of local inhabitants, some minor stories? I would be really happy about it.

And speaking of unfinished - Kieva mentions possibility of using map to manage tribes. In documents I found references to possibility of bombing a bunch cities. All this abandoned? And yes, is it possible to find Alison Wee's records in the game? Because I would really like to read about the Vikings, about Union City and everything else.

It also seems to me that in some moments plot is somewhat inconsistent. In Vault, before Bragg murders, I choose warrior replica even as a scientist, and in Union City, playing as warrior, in talk with Annai, she says that she used the terminal to talk with me...

Continuing the list of questions, is it planned to make additional content after finishing the work on the mod? Well, for example, add appearance of Black Vultures, Psycho and Survivors as bandits on Mojave. Special legionnaires using Shi katanas? Mention of events in the Passage twenty years ago?

And last thing that seriously upset me, especially in prologue, is mutually exclusive content. No, I have nothing against him if he has a reasonable explanation. I understand that scientist will not be taken into security of the Vault. But what is difference between passing for a warrior who is against Enclave, from passing for a scientist, so that I can't take Alpha, even if I still managed to restore it? Similarly, why can't we take Eric and Jane on scientist way, and try to break into third and fourth levels of Mary on way of a warrior, even if it will be much more difficult? This is quite an interesting challenge. Or at least go to Overseerer office after his death and read same there?