Last month we transitioned to our release candidate name Fallout: New California from the old Project Brazil, and we've been making steady progress since. Check it!

Another month, another update!

September went pretty well! Most of the month has been spent more on fixing bugs and audio issues, and coding the main quest, rather than creative art issues so there will be less pretty new pictures and videos this time around.

Also because the in-game ending videos I'm making are super spoilers now, and I wouldn't want to show them, but they will likely take at least a month or more to make. So that means between now and November i will probably go a bit dark, maybe only posting a few images of non-spoiler end game assets. Since we are now developing largely at the end of the mod it gets hard to show fun images. :D 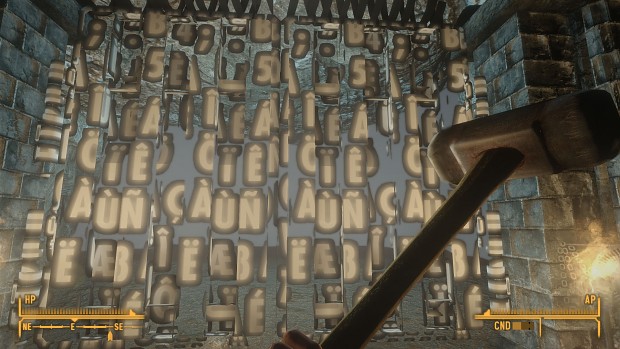 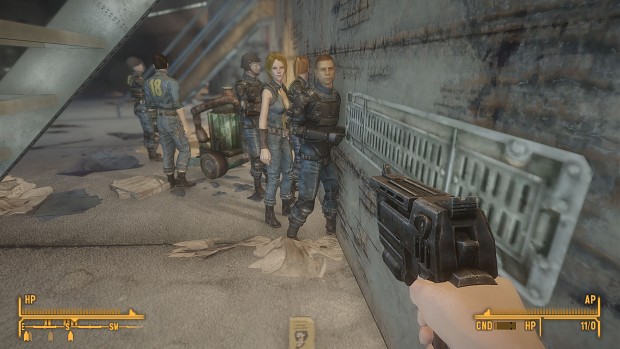 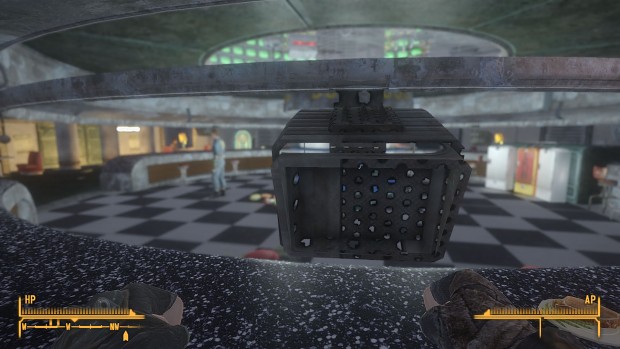 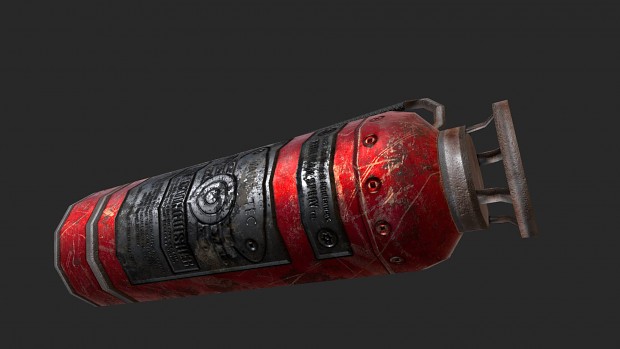 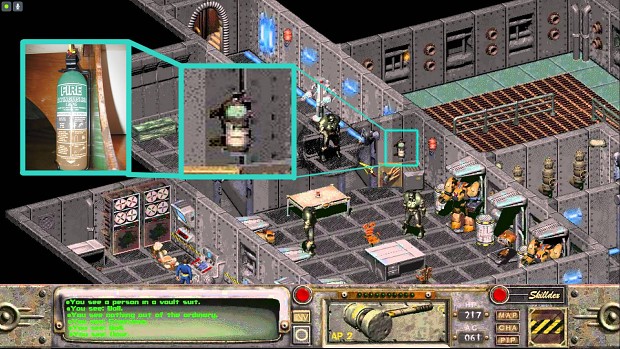 A funny conversation about how the lore evolves began on Discord and Facebook when I posted this image of a re-textured Vault Fire Extinguisher.

It turns out the original Fallout 1 and 2 Vault Fire Extinguisher was turquoise, based on a 1980s look.

Fallout 3 and New Vegas had Fire Extinguishers that are Copper, based on the 1950s vibe.

Mine is red, because I need you to be able to see it to shoot it and thus use it in combat, because red mean boom.

You may commence the parade of lore-unfriendly downvotes and accusations of "dumbing down the series." 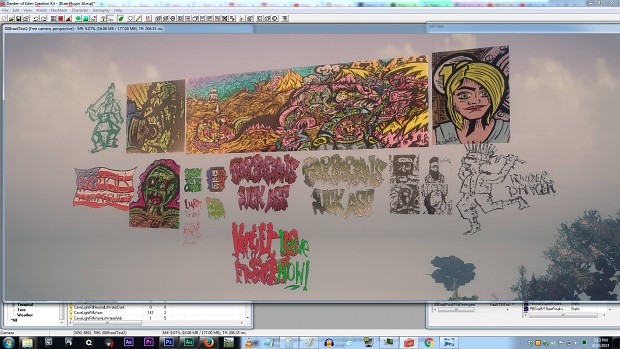 Art by Frank Louis Allen, atlases were set up by Doodles, normals & meshes by me.

Our Vault has a VERY 90s' Post Apocalypse vibe that may not fit Fallout 3, Fallout 4, and New Vegas, but it nails the vibe of Fallout 1 and 2, so I ain't even trippin. I'm pretty honey badger about this.

We also got a message from Ryan Hellquist asking if we'd like to add his & Ali Williams's Nuka Girl comic to our mod as an easter egg. I said sure. So you can now find the comic book in our mod. It grants +5 Energy Weapons.

We also changed our name to Fallout New California September 1st and it generated some buzz.

And a lot of questions! 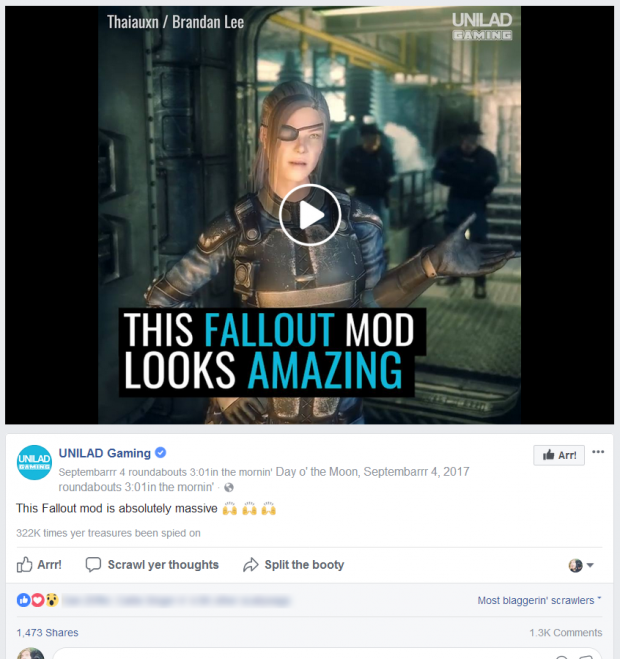 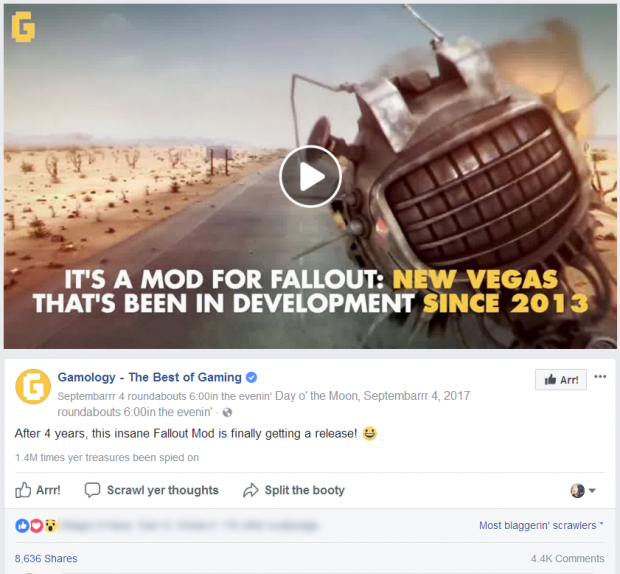 The first thing I'd like to let the Press know (looking at you PCGamer) is our development start date: 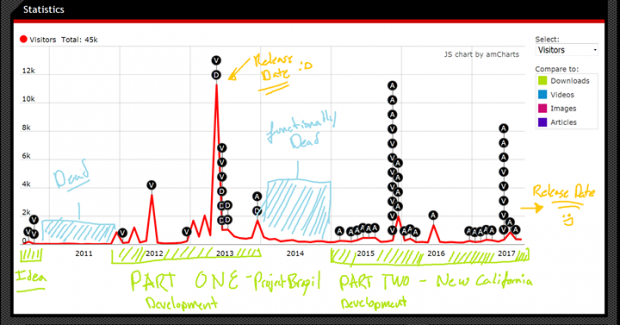 I know. It feels like it was forever ago to me too, but it was not that long.

We've actually been in development since 2012.

In Oct 2010 is our first little testing the waters moment, uploading some early art and level designs, but that was it. I joined Man Vs Wild in November 2010, my girlfriend broke up with me, there was a mass shooting and all kinds of crazy conspiracy theorists fucking up my life, I was working on movies and photos -- it was a mess.

So in 2012 when my life settled back down we started this mod in reality. You can see the heartbeat on the chart. We worked til May 2013 and boom, release, a few patches, and we went back underground in 2014.

2015 we roared back to life and that is where our mod begins posting once a month here on ModDB like clockwork. The dip and spike in Sep-Nov 2015 was me recording all our voice acting for Part 2. There were 41 voice actors recording 21 hours of dialogue in 13,000 voiced lines. A LOT of audio.

2017 is this year and we've kicked some serious ass. For me, that time went by in a blink. I don't even know where it went to be honest. I wanted to be done by May, and here we are a the start of October where I wanted to be in April. So much for that, so I'm cramming work in at the tail end of the year. I'm not even working a paying job right now, I'm just getting by on a diet of whatever is left and paying rent with savings. Due to the stress and effort time dilation is occurring and weeks feel like days. It's crazy. I feel like if time accelerates any faster I'll be 60 next week.

Will this mod require any dependencies or enb?

Also posed as, "will this mod melt my PC?"

I cannot guarantee your PC will not melt from hours of gaming, but it won't require ENB or any other mods. We don't even require the DLC. You can grab New Vegas, vanilla -- no GOTY, no patches (but it helps) shove in Fallout Mod Manager, toggle Archive Invalidation, install Fallout: New California, and there, you're done. You will PROBABLY want the 4GB Extender on your EXE too, just in case. Our mod gets a little hectic, and this old engine is, well, old. It needs a little help.

But, The Rudy ENB looks exactly like how I want you to experience my mod. See above for dreamy details. That is how I intended it to look, so that's my #1 recommendation.

We also recommend and support Project Nevada and Solid Project. They just joined the team after years of begging too, so now we are fully supported with patches to ensure compatibility.

Fallout Character Overhaul will work, but it needs a patch, and I have not made one. Seeing as how only I can do it, that'll just be left for a post-release update.

Our HD textures will be a separate download too, so low end users with shitty old PCs that New Vegas runs on will work just fine. Us with the big rigs can download the extra 4GB of textures.

The next question is about map size.

Trust me, our map is big enough. :p 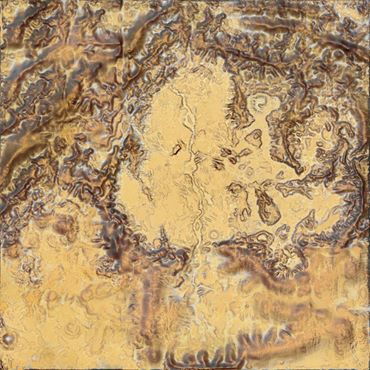 This is our map with nothing on it. Just height details. 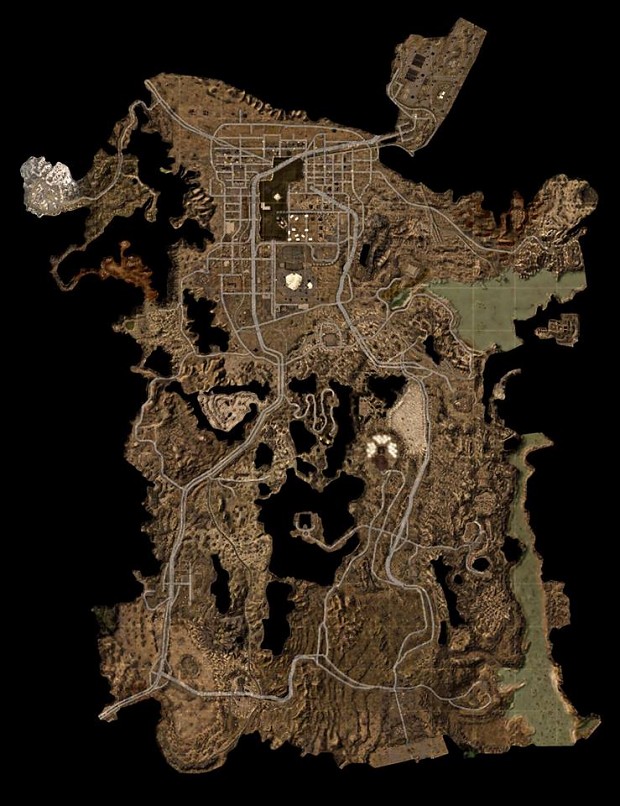 This is New Vegas with ONLY playable space. Invisible walls and out of bounds are in black. 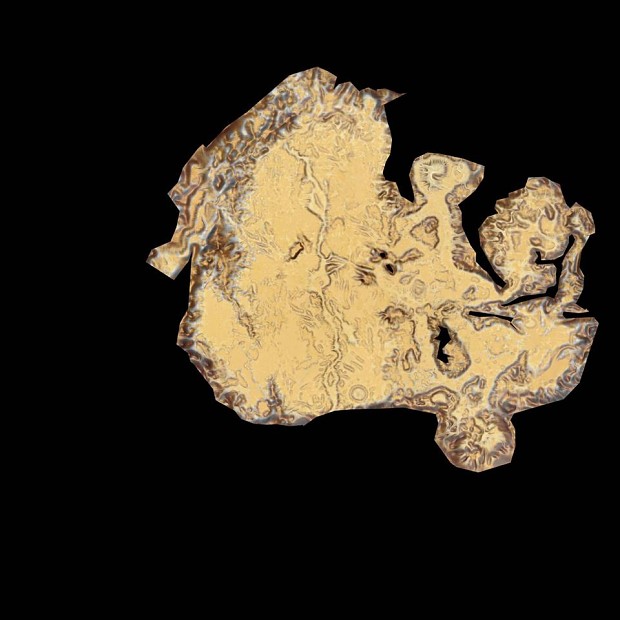 This is our map as an island of playable space. 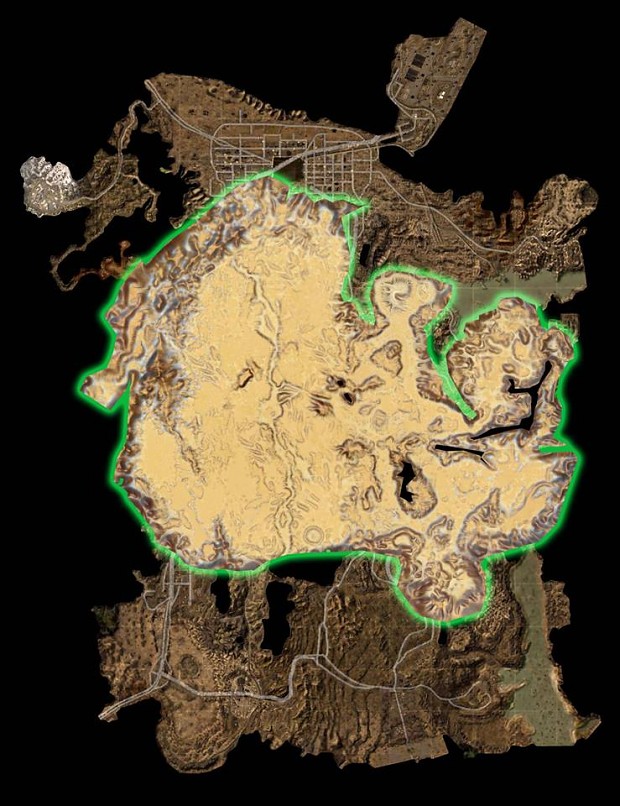 This is our map compared to New Vegas. 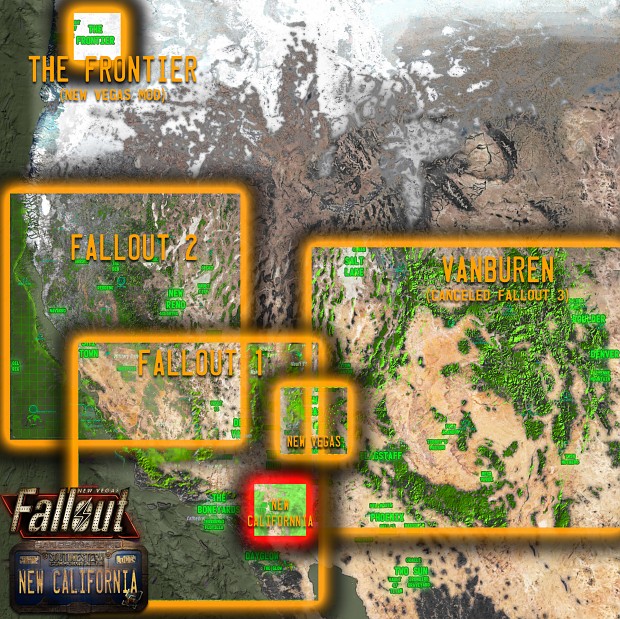 No, we don't visit the Boneyards, Shady Sands, or any Fallout 1 or 2 or New Vegas locations. We talk about them all the time but we don't go there or show them. we also don't resurrect any legacy NPCs, but we do feature their decedents, and a few that are mentioned only in the Fallout Bible.

Will this be on XBone or PS4? 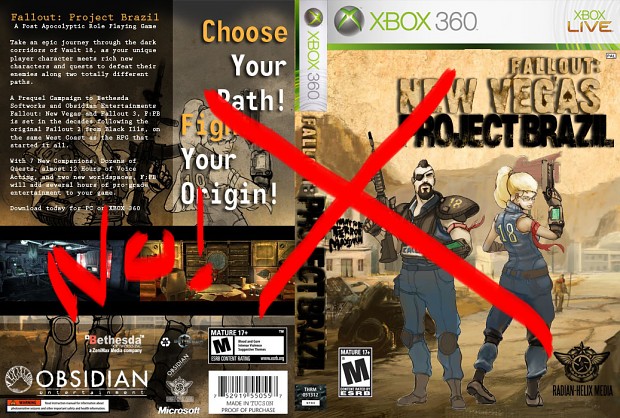 And finally... RELEASE DATE WHEN? 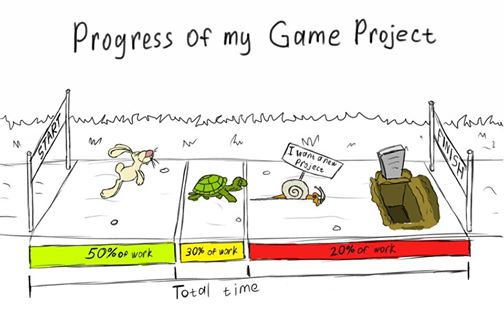 Since we began keeping a progress chart in March 2015 til today! 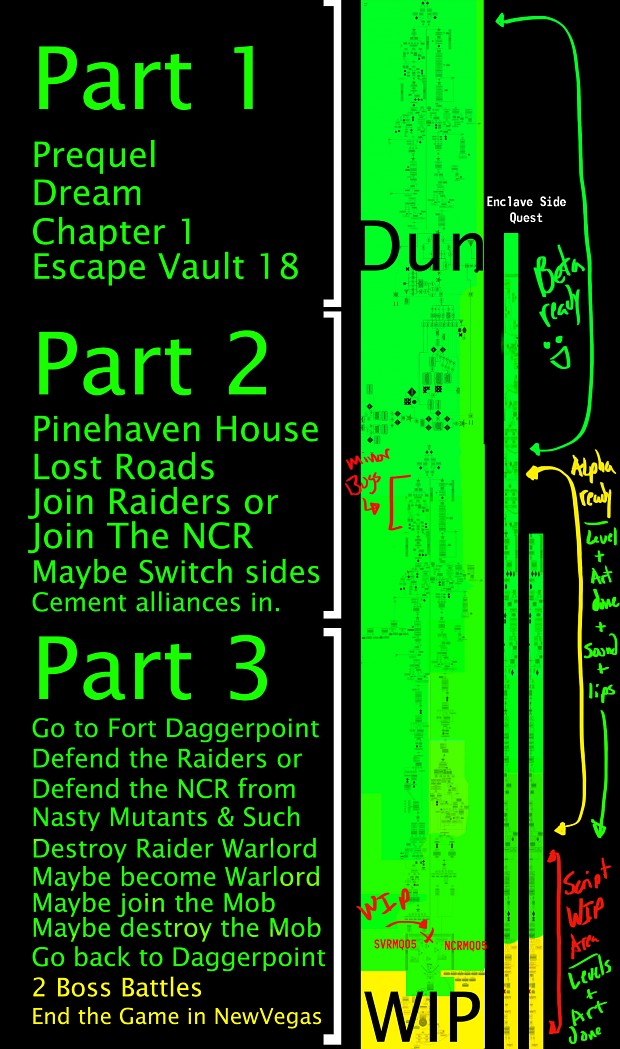 Not doing too bad!

Technically the dream should be red. We cut it and replaced it with this: 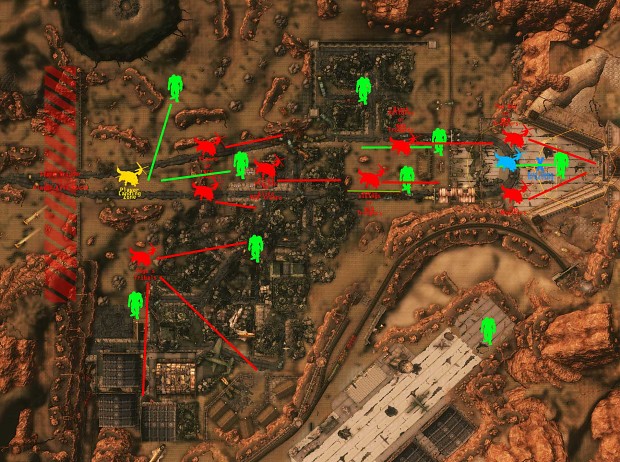 This map is where we just wrapped up!

If you look at the progress chart, the yellow area at the bottom. Rick just finished scripting this area to revise Seddon's prior existing scripts from when we had all that cut content in 2015. Now that it's done, we'll be coding the inside of the Fort, battling through layers of bad guys with your allies and making life or death decisions along the way.

Then you meet the mega boss, and after beating him, grind down the final two bosses and end the game with a bang. :D All that is spoilers though! So, shhhh.

I plan on announcing a release date in our October update. If we aren't ready I'll push that back, but I think we're gonna make it.

Also, if you plan of heading to Wasteland Weekend...

A bunch of our voice actors are out there!

Head on over to the Six Finger Discount and tell them you are fans of Project Brazil for a mutant fist bump, and if you run into Legio I give a shout out to the Romans for me. Unless you're a Profligate. Degenerates like you belong on a cross! 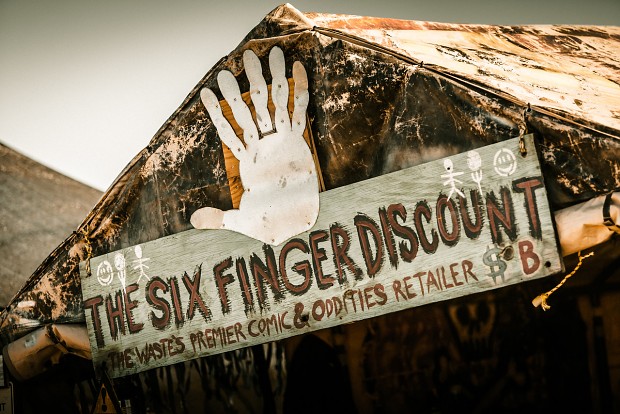 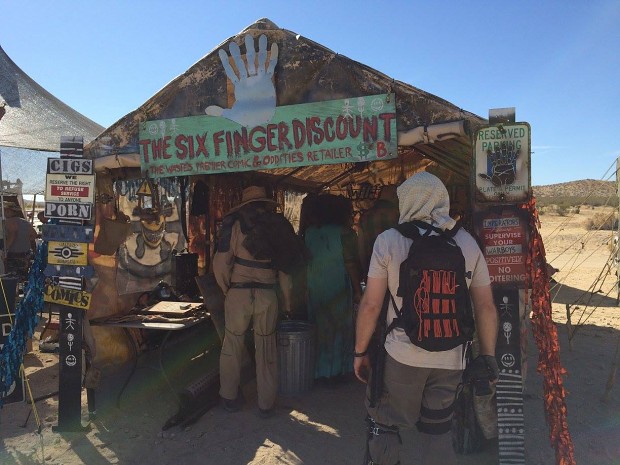 What’s that little map up the top? The frontier? My oh my that sounds exciting. Wonder who works on that

Yeah, I know cause I'm one of those fine chaps :)

Hope this 4gb patch works, I struggled playing New Vegas on my Win10 computer as it would crash periodically. Would be a great shame to miss out such a high-effort mod like yours over own technical problems.

We crash a lot less than Vanilla. The engine still randomly peaks memory and trips on its own ****, but there's nothing we can do about it. It's the engine. If we had sourcecode to recompile we'd fix it. ;/ But it'd break EULA.

Welp, this looks 10/10. Also the detail with the vendors. Keep it coming!

Using latest version of 4GB patch from Nexus (which works with all Steam version including German no gore and ENCZRUPL) fixed almost all my memory issues with the game, also I use NVSE for heap memory patch with ENB and I can play for hours without crashing on both W7 and W10 x64. YUP also helps.. When you will use 4GB patch you should disable ENB memory patch:
[MEMORY]
ExpandSystemMemoryX64=false
ReduceSystemMemoryUsage=false
DisableDriverMemoryManager=false
DisablePreloadToVRAM=false
EnableUnsafeMemoryHacks=false
ReservedMemorySizeMb=128
VideoMemorySizeMb=8000 (or 4000 depending on your VRAM)
EnableCompression=false
AutodetectVideoMemorySize=false

You shouldn't disable the memory patch. I personally always run out of ram without the extra ENBhost Ram extender. Without it I usually run all few minutes into a NVSE out of memory crash. And yes, I use both the 4GB patch and also the heap patch both for NVSE and New Vegas Stutter Remover. But I had to use the ENBboost aswell with memory ram extender too. No way around it for me. But its up to the mods you use. I have a very huge amount of mods running on my games + maximum highres textures.

The excitement keeps peaking, looking forward to the release. As soon as the release date drops I can reinstall NV again just for New California. I dread it but I sure as hell will do it. Greetings from GUN and The Gun Insider

SO excited for this!

If anything deserves press coverage, it's this. Props for minimal dependencies too.
All the best, guys.

I only found out about this recently. Could someone tell me whether it will feature medhanics such as sprinting, dynamic crosshair or grenade throwing function?

We support them but don't feature them. You'll need Project Nevada and Solid Project for that.

I nearly forgot those were added features until I read these posts.

I forgot this is for New Vegas, I was so sad that I would not be able to run it before cause I somehow confused it with Fallout 4.

Well, guess I'm anxious for it!