The third part of the comprehensive Roman faction preview.

Make sure that you also check out Part 1 and Part 2 of the Roman Faction Preview. 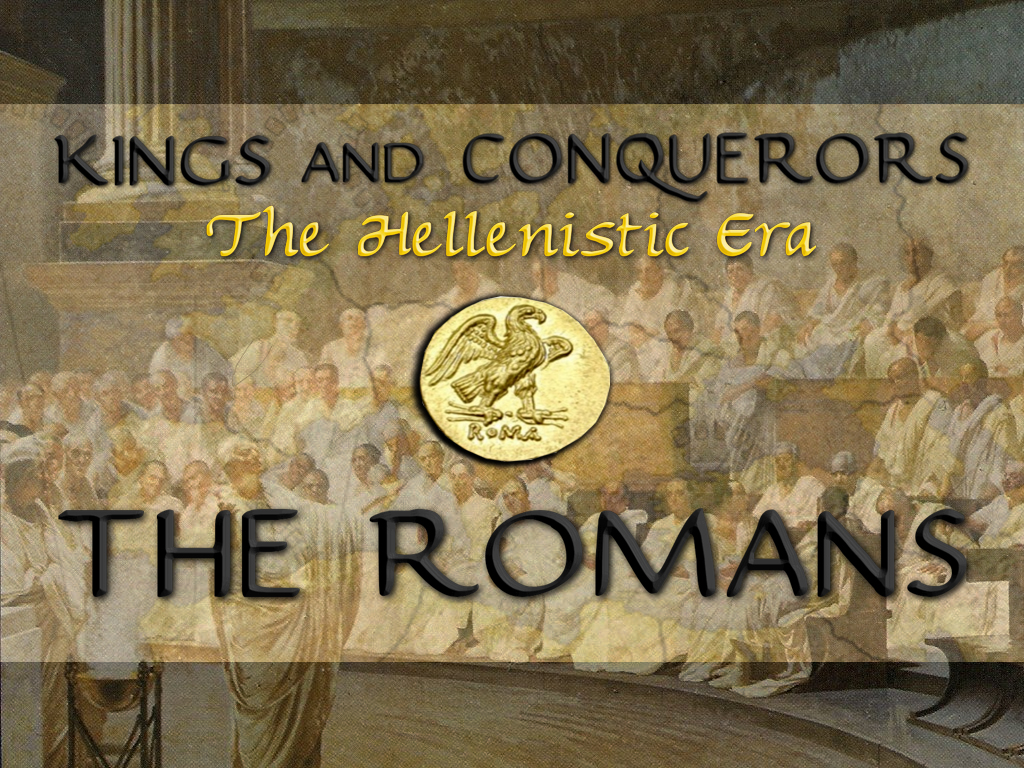 Today, we present the third and final part of the Roman faction preview. In this preview, we will be showing you The Hellenistic Era's new government system and the Roman units and buildings relating to this feature.


The government system has been completely reworked in The Hellenistic Era. Rather than having three levels of government, there are instead three tiers of policy decisions focusing on different aspects of a nation: government, military and civic. For each of these policy decisions, the player will choose between two different technologies. You will notice that these technologies have more bonuses than in the original game, unlocking additional units and buildings. Also, another new feature is that the second- and third-tier technologies spawn new patriots rather than replacing previous ones. This means that you will end up with three different patriots upon researching policy techs in all three tiers. 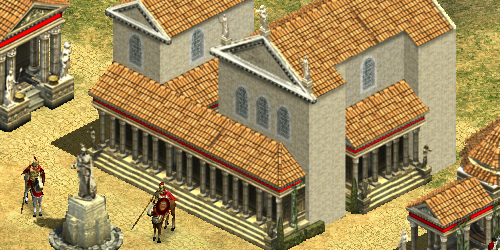 The meeting house is where you research your policy decisions. Like the senate in the original game, it marks your capital. It also here that you can research the reform techs and train elite units.


By researching Despotism, you are giving one man absolute power in your nation. This allows you to research technology faster, so this is a good policy for those who like to get things done quickly. 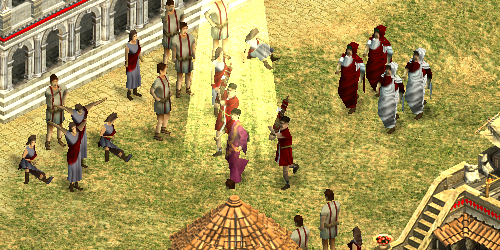 The Tyrant acts like a Supply Wagon and has a greater Line-of-Sight. He doubles plunder from enemy buildings destroyed in his radius, and gives plunder from enemy units. The Roman Tyrant wears the solid purple toga picta and is accompanied by two lictors, who served as bodyguards for magistrates. 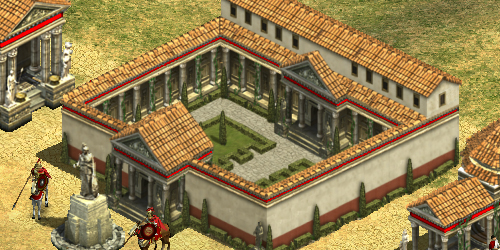 The Palace is an upgrade of the Meeting House. It has extra health, it can attack enemies and it can also detect cloaked units. Additionally, it provides a small wonder point bonus.


Researching this policy technology puts elected officials in charge of your nation. This allows ideas and innovation to flow more freely, which can be very useful given the high costs of researching the reform techs and the rest of the policy technologies. 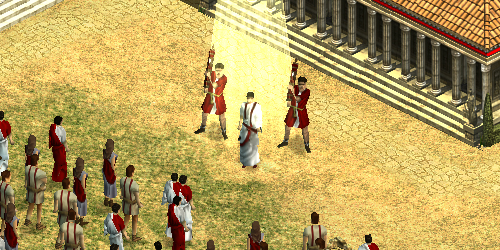 The Consul heals buildings and troops in his radius, as long as they are not taking attrition damage. Friendly units in his radius are immune to bribery, and have an increased range and Line-of-Sight. The Roman Consul wears a toga praetexta and a tunica laticlavia, the broad stripes on these garments showing that he is a magistrate. He is accompanied by two lictors.


This policy technology is ideal for offensive players as it provides a number of bonuses that make it easier to follow an aggressive strategy. Buildings such as the Stockade and Fortified Barracks will allow you to create solid forward bases, and with cheaper barracks units and military technology you can field a larger army earlier. 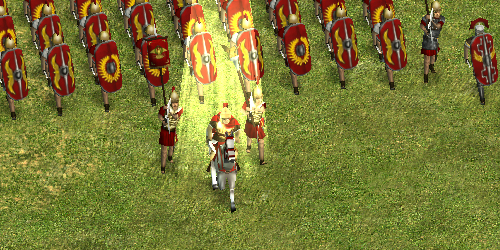 The Commander acts like a Supply Wagon, and is also capable of combat. All units in his radius have extra armour and attack, and enemy cities in his radius assimilate much more quickly. The Roman Commander is well protected by his crested helmet and breastplate. He is accompanied by an aquilifer (eagle bearer) and a vexillarius (flag bearer). 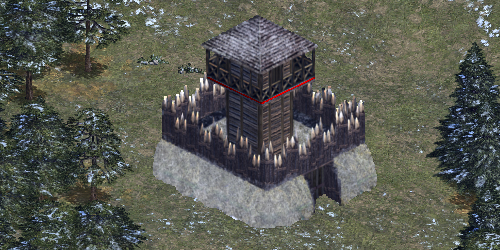 The Stockade is an upgrade of the Outpost. It is more expensive, but it is stronger and is capable of attacking nearby enemies. 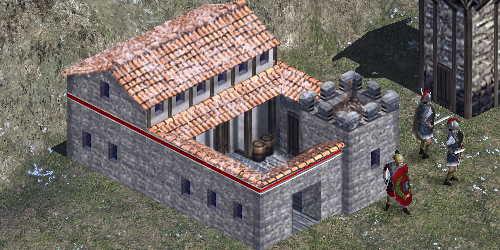 The Fortified Barracks is an upgrade of the Barracks. It is more expensive, but it is stronger and is capable of attacking nearby enemies. 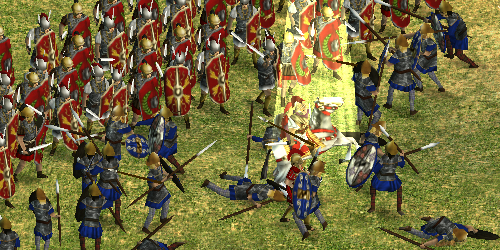 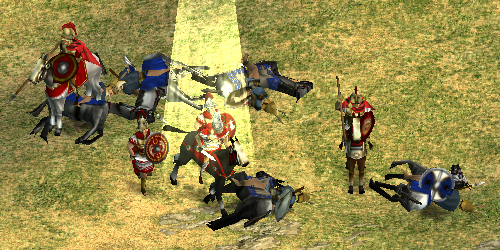 The Military Tyrant and Consul are upgrades of the Tyrant and Consul. While they lose their special patriot bonuses mentioned earlier, they are capable of combat. Their top-quality armour and fearsome skill on the battlefield make them some of the most powerful units available in The Hellenistic Era. The Roman Military Tyrants and Consuls wear ornate helmets and armour and are accompanied by military tribunes who are also well-equipped.


This policy technology is ideal for defensive players as it provides a number of bonuses that make it more difficult for enemies to take your cities. Buildings such as the Guard Tower and Citadel will force your enemies to commit to lengthy sieges, while faster training and building times allow you to quickly build up a defence in times of crisis. 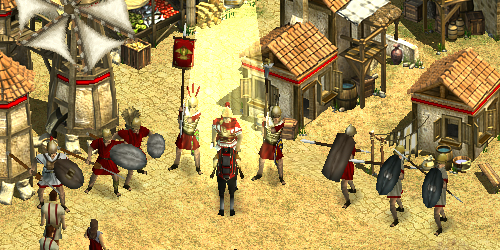 The Governor is capable of combat and can bribe enemy units as if he were a spy. Buildings in his radius get extra armour, and buildings and troops in his radius heal while in friendly territory. The Roman Governor is well protected by his crested helmet and breastplate, and is accompanied by an aquilifer (eagle bearer) and a vexillarius (flag bearer). 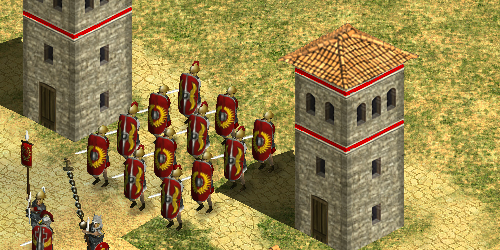 The Guard Tower is an upgrade of the Watchtower. It is more expensive, takes longer to build and can only be built in cities, but it has greater armour and offensive strength. 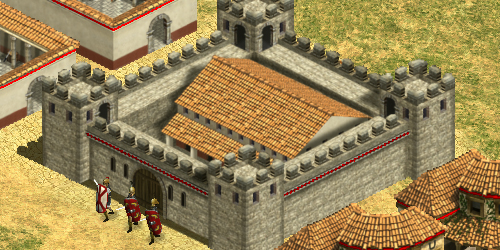 The Citadel is a fortress type building, though the normal fort remains available. It is costlier, takes a lot longer to build and can only be built within city limits, but it can withstand a lot of punishment and it also has a powerful attack.


This policy technology provides military and economic bonuses that support the wealthy patricians of your nation's society. If you have you also researched Offensive Doctrine, you can turn to slavery and access a cheaper work force that is still just as effective. Furthermore it enhances cavalry in multiple ways, as they were often part of the upper classes. 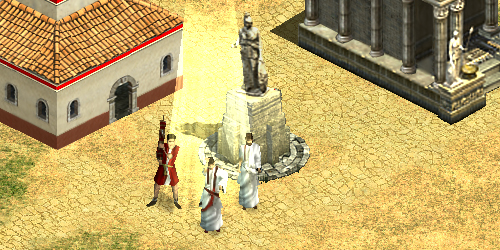 The Optimas acts like a supply wagon, and produces a wealth trickle. Siege units in his radius move and deploy faster. Mounted units in his radius have extra attack and armour. As a magistrate, the Roman Optimas wears a toga praetexta and a tunica laticlavia. He is accompanied by a lictor and a fellow senator. 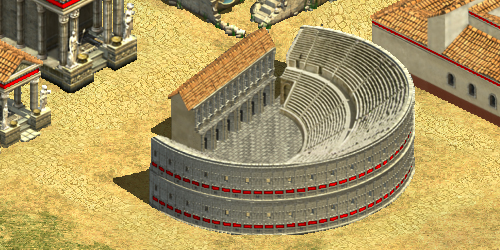 The Theatre is a special civic building that produces a knowledge trickle and heals nearby units. Additionally, it provides a small wonder point bonus. 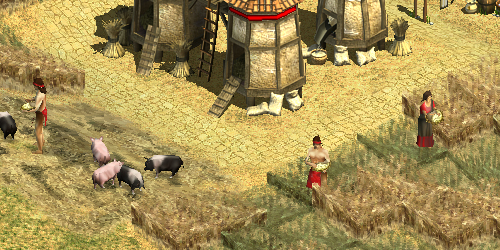 Slaves are an upgrade of Citizens. They have no ramp cost and are trained much faster, but they have much less health and a smaller attack than ordinary Citizens.


This policy technology provides bonuses to support the ordinary citizens of your nation. An increased Commerce Limit and access to Amphitheatres will allow you to build up a stronger economy. If you have also researched Defensive Strategy, you will be able to protect your economy with armed merchants and caravans. 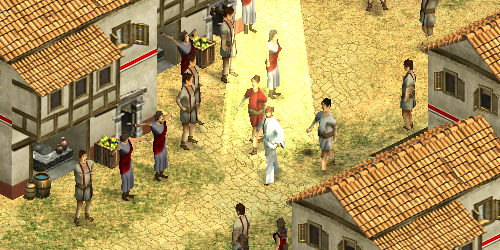 The Popularis produces a food trickle. Unit-producing buildings in his radius produce at a faster rate, and buildings under construction in his radius build more quickly. Buildings and troops in his radius heal while in friendly or neutral territory. As tribunus plebis (tribune of the people), the Roman Popularis is not considered a magistrate so he does not wear the toga praetexta or the tunica laticlavia, instead wearing a narrow stripes on his tunic to show that he is a senator. He is accompanied by plebians rather than lictors because tribunes were sacrosanct, meaning that assaulting them was prohibited, so they did not need bodyguards. 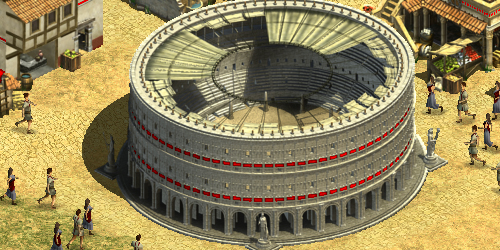 The Amphitheatre is a special civic building that produces a wealth trickle. Additionally, it provides a small wonder point bonus.

We hope you have enjoyed this preview. As usual, feel free to post your questions and comments here. The features mentioned in this preview have not all been implemented yet, so we are open to suggestions about bonuses that could be added or changed.

Special Note: We used the "ENB MOD for Rise of Nations and its expansion" by GustavoUlate25 for the screenshots. You can download it here: Moddb.com.

I just wanted to say this is one of those mods, that I look foreword to every update big or small.

Thank you, I'm glad you enjoyed the preview.

?did this come out

We're still working on it.

Looking at slaves, I got a suggestion - make them move more slowly. That means slaves have another drawback - they can't be readily transferred to the front quickly.

That's a good idea, thanks for the suggestion.