The second part of the comprehensive preview about The Hellenistic Era's Roman faction.

You can find the first preview of the Roman Faction here: Moddb.com 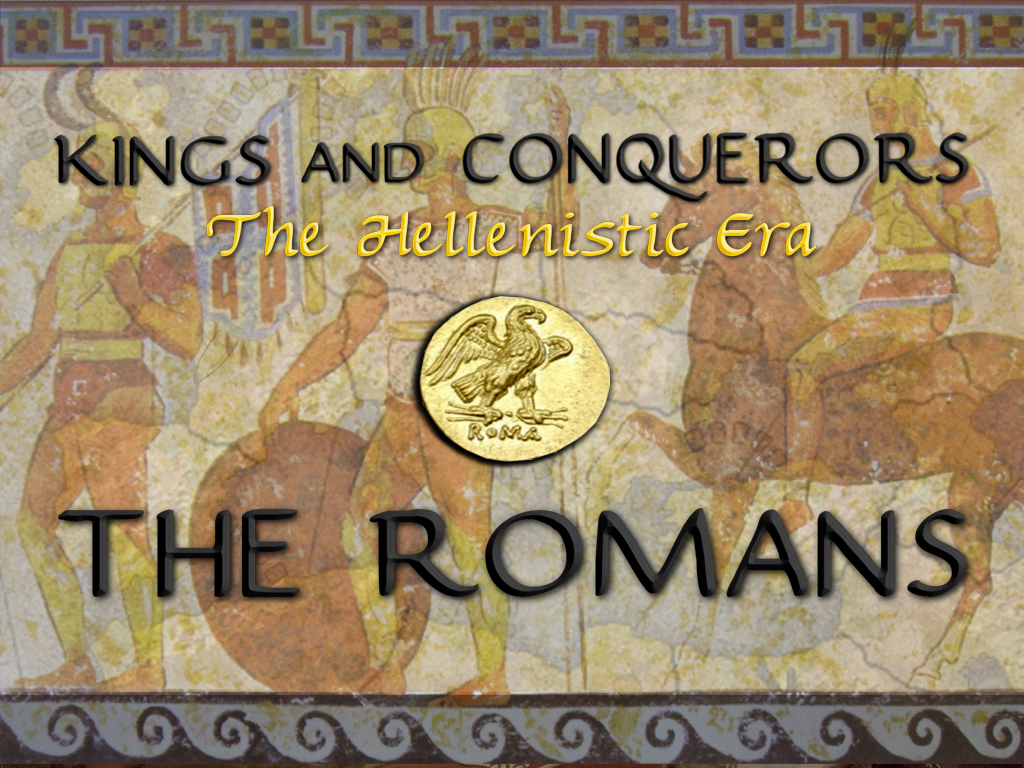 Today, we present the second part of the Roman faction preview. In this preview, we will be showing you some important features of The Hellenistic Era and the Roman units and buildings that relate to these features.

The officers are somewhat similar to the generals whom they replace, but there are a couple of important differences. The biggest difference is that officers will now be able to play a real part in battle. That's right - they can now fight. Furthermore, with their status comes high quality equipment and high levels of experience and training, so they are certainly some of the best soldiers you can field. Also, officers have enhanced commanding abilities, with extra bonuses that generally differ from faction to faction. However, with great power comes much great costs and training times, so don't expect to see officers everywhere. Officers are available at the Fort. 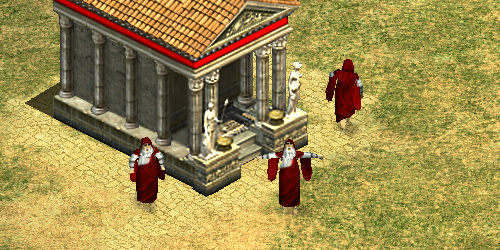 In The Hellenistic Era, the priest is a support unit capable of healing nearby units, as you might expect given their role in other historical RTS games. Also, they have the ability to "convert" enemy units to your side. Priests played an important role in society throughout the ancient world, so it makes sense that they should appear in this mod. Priests are available at the Temple.

Nations won't just be limited to training their own people to create an army - they will also be able to recruit mercenaries, who cost mainly wealth. What makes mercenaries unique is that they are trained in groups, rather than as individual units. Some of these groups will include more than one type of unit. Mercenary groups will take longer to train than normal units, but they train a lot faster than a similarly sized group of normal units would, though they are still more expensive. Mercenaries are available at the Outpost. 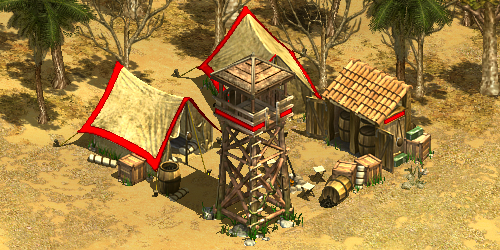 The outpost replaces the observation post. As mentioned above, mercenaries are recruited from the outpost, though it can still be used as a lookout due to its large line-of-sight, relatively cheap cost and its ability to detect cloaked enemies. Also outposts can be built anywhere, even in enemy territory. However they will suffer attrition damage when in enemy territory, and they are easy to destroy. 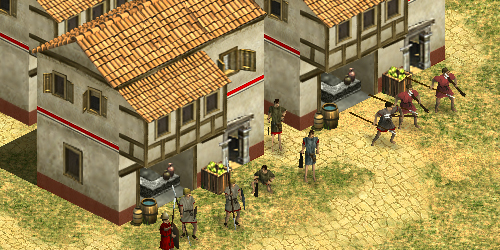 Houses are cheap lower-class dwellings that provide basic levied troops. They can only be built inside cities, but unlike with other civic buildings there is no limit to the number of houses that can be placed in each city. Additionally, once you research the first taxation tech, houses produce a small wealth trickle. The size of this trickle is increased with further taxation research. 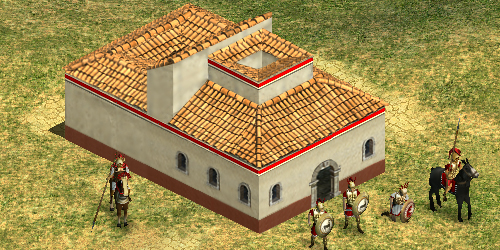 Villas are expensive upper-class estates that can supply your nation with powerful veteran and elite units. They can only be built inside cities, and there is a limit of one per city. Additionally, once you research the first taxation tech, villas produce a medium-sized wealth trickle. The size of this trickle is increased with further taxation research. 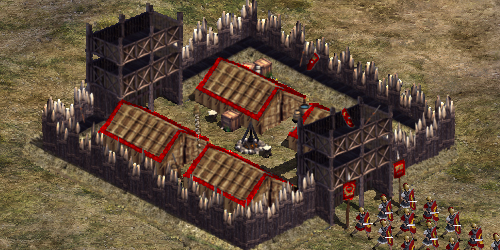 The castra is a military building unique to the Romans which can train barracks units. It is cheaper and quicker to build than the normal barracks, and it has a small attack, but it can be destroyed quickly. Like the outpost, it has a large line-of-sight and it can be built outside your borders. The Romans can access both the castra and barracks. Historically, castra were military camps used extensively by the Roman army. While the castra above is of a temporary type, there were also permanent camps. 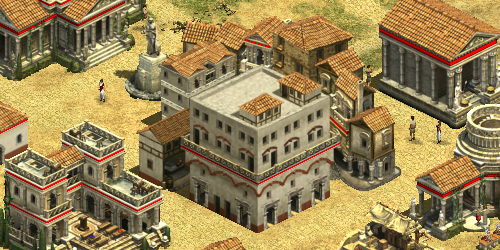 While other nations have to settle for large cities as their highest city level, the Romans can go an extra step and upgrade their large cities to major cities. Major cities, like in the original game, are much tougher than large cities, have a larger economic radius and can garrison more units. Also, as upgrading your cities will allow you to place extra farms in them, major cities can hold more farms than other city levels. Historically, as the Romans expanded, so did their cities. Rome was a huge city, with over a million inhabitants at its height. It was the largest city of its time, and it took until the 19th century before another European city would become nearly as large.

The Sabellians represent the Italian Allied soldiers that fought for Rome, and they are available as mercenaries until the Romans research the level two reforms. The Sabellian mercenaries are trained in groups, with each one containing Hastati Sabelli, Hoplites Sabelli and Equites Sabelli. Historically, the Sabellians were a collection of Oscan tribes around central and southern Italy, including the Samnites and Campanians. The Sabellians involved themselves in numerous conflicts over the period that The Hellenistic Era covers, such as the Pyrrhic and Punic Wars, in which they rebelled against Rome. Their last rebellion occurred during the Social War in the early 1st century BC. Despite their often hostile behaviour towards the Romans, they formed a large part of Rome's Allied armies. 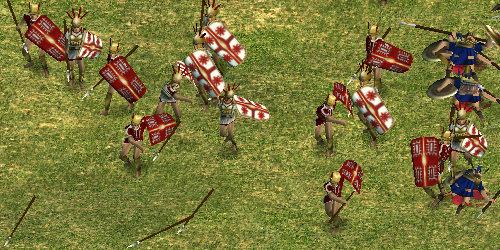 The hastati sabelli are medium infantry armed with javelins. They aren't as deadly as the Rome's hastati, but they are more nimble. The hastati sabelli can be distinguished by their short, patterned tunics and by the feathers decorating their attic or montefortino helmets. They all have a pair of greaves, and some wear a pectoral plate. 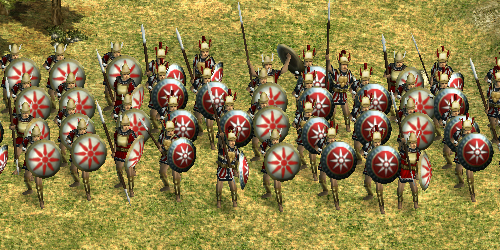 The hoplites sabelli are medium spearmen. Sacrificing armour for mobility, these soldiers will not hold out against heavy spearmen such as the triarii. Like the hastati sabelli, the hoplites sabelli wear short tunics and greaves and they decorate their helmets with feathers. Also, they wear pectorial plates and carry aspis shields. 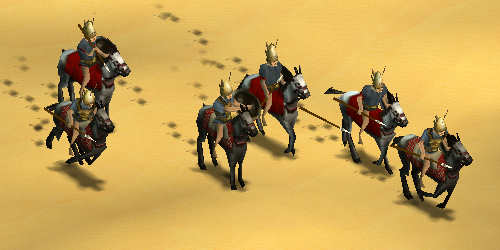 Up until the second level of reforms are researched, Rome has to rely on the mercenary equites sabelli as its ranged cavalry unit. These quick, lightly-armed horsemen are intended for skirmishing and scouting, so they do not have the protection or skill to engage in a melee. Their armour is limited to a shield, a highly decorated helmet and sometimes a triple-disk cuirass. 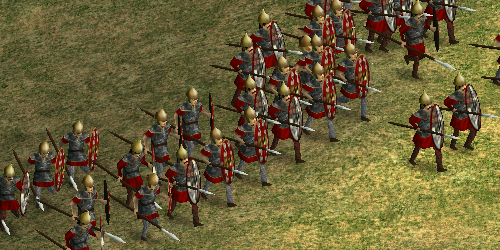 The pedites gallorum are heavy auxiliary spearmen, available after researching level two reforms. As the Romans loses access to its triarii and hoplites sabelli after these same reforms, these mercenaries become their only source of anti-cavalry infantry. They are well-armoured and highly skilled soldiers, so they are more than capable of replacing the triarii. Historically, the pedites gallorum were almost exclusively used during Julius Caesar's conquest of Gaul. The recruitment of these soldiers originates from Caesar's policy of divide and conquer, as he allied with some tribes to help him defeat other tribes. 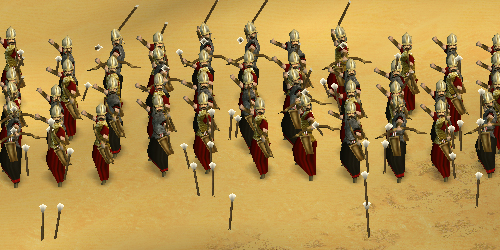 Rome never used archery extensively, and their use of archers was restricted to auxiliaries and mercenaries. Thus, they are limited to one archery unit - the sagittarii syrorum, available after researching level two reforms. These archers are some of the best available, as they are highly skilled and equipped with powerful composite bows. Also, unlike most other archers, they are well-protected by helmets and scale or chainmail armour. As a result however, they are also more expensive than most other archers. Historically, the sagittarii syrorum came from Syria, an area with a strong archery traditions. Once the Romans could access these eastern archers, they recruited them in large numbers. By the time of the imperial Roman army, the majority of archers came from the eastern provinces of the empire.


Rome's unique officer is the centurio. This unit functions in a similar way to Rome's other units, as it starts off weaker than most other generals, and does not have a unique bonus, but it becomes more powerful with each reform tech researched. When the second reform tech is researched, not only is the centurio one of the best in battle, it also provides units within its radius with a large armour boost, and it also boosts the Line-of-Sight, range and attack and nearby siege units. Centuriones can be recognised by the transverse crests on their helmets and by the signifer and vexillarius accompanying them. Historically, a centurion was an officer of the Roman army who commanded a century of around 60 to 80 men. Centurions fought alongside the soldiers whom they commanded, and they led from the front. While this inspired their men, it did lead to them suffering a disproportionate number of casualties. 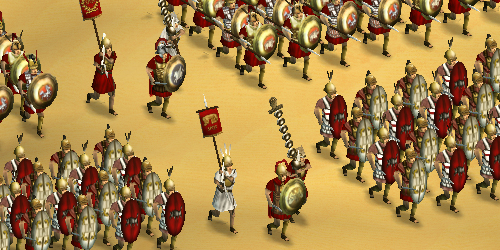 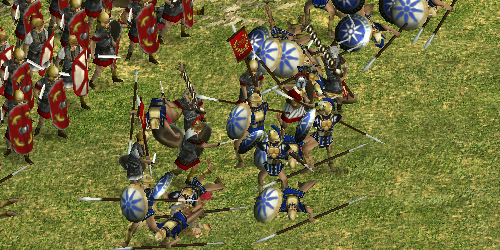 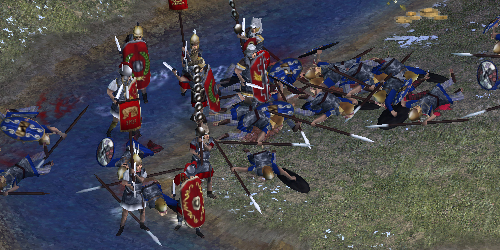 We hope you have enjoyed this preview. As usual, feel free to post your questions and comments here.

Special Note: We used the "ENB MOD for Rise of Nations and its expansion" by GustavoUlate25 for the screenshots. You can download it here: Moddb.com.

You guys are very good at this, It all looks so great!
Can't wait for the Greeks :D

Thank you! After we finish the Romans, we are planning to work on one of the Hellenistic Successor states, so you've got a lot to look forward to.