I am happy to announce the release of Beta 7 of Exterminatus - Rival Species 2. This beta brings the number of player classes up to 12 and a total of 9 playable maps with the addition of the marine apothecary class, tyranid biovore and the all new map tarsis ultra.

Team Rival Species is pleased to release a major new version of Exterminatus, our warhammer 40k mod for the Source engine. Beta 7.0 adds the long awaited marine Apothecary player class and tyranid Biovore class, along with a new map Tarsis Ultra and the return of a classic Rival Species map City Conflict.

Installation
Delete all old versions, re-install from fresh. Restart Steam. You should now see the Exterminatus Beta 7.0 in your steam games library. 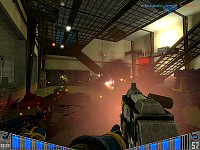 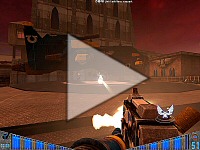 Features
First person team play, imperial space marines versus tyranid hive fleet behemoth. Play as any of 12 distinct classes, each with their own weapons, abilities and tactics. Players unlock higher tier classes by capturing objectives and wounding the enemy.

All twelve classes are documented in the Exterminatus player manual , along with hints and tips for playing. 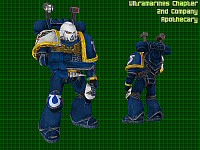 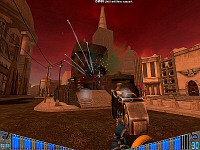 Mission and Objective based game play in varied environments from the dark future of Warhammer 40,000. Capture map objectives to move your team's spawns point to that location and unlock reward classes.

What's new in 7.0
For a complete list of the improvements we've made since Beta 6.25 please read this article on our ModDB page. 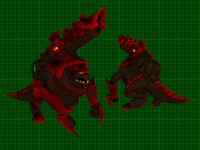 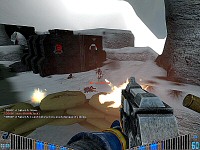 Playing the Game
Regular Beta games are scheduled several times per week though our steam community group, just join the group and you'll get event reminders though Steam whenever a scheduled game is on.

Heroes of the Imperium
Long term community contributors Nqss and Stahlhagel have joined the EX development team, creating new maps and models respectively. Keep an eye out for their name banners in-game.

Community Contributions
An EX fan jfv00 has made a custom launcher icon (below) from some of our old PR renders, click the thumbnail to see the full sized image on Deviant Art. We also owe special thanks to The VMan for his contribution of large set of high quality particle effects that have improved EX in ways I had not thought possible. 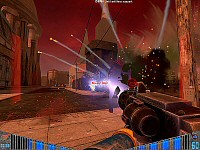 Future Plans
Stahlhagel has been churning out models for new player classes and war gear in recent months. Expect to see Assault marines and Carnifex variations in alpha testing before too long.

Help Wanted
We're using a lot of stock Source sound effects in EX and could really use help from a dedicated sound effects specialist to find/record/mix/edit custom sound effects for EX. We're also looking for graphic artists to improve things like our loading screens and objective markers.

a deviantart icon with black round curve SO BADASS AND CREATIVE

Dude, it's a shortcut icon.

are there any servers up for this?

Yes. If you're not seeing them listed in the server browser they are also listed on our steam community page (see the main EX profile).

how do you find that? i must know!
i think i understood how, but to be sure, don't i search on steam?
God I'm confused...

I don't think they see us as a threat to their commercial interests and i'm very wary of keeping their copyrighted material out of the mod and making sure GW get the credit they deserve for their IP.

Warhammer 40K mods aren't a threat to their commercial interest, but that has never stopped them in the past. If anything, I would have thought that modding would increase exposure of the W40K universe to those who are unfamiliar to it.

But anyway, I'm tracking the mod and I hope everything goes well for your team :)

An addon for Garry's Mod lead me to buy every single Dawn of War game, expansion, and DLC, and more recently purchase Assault on Black Reach, and plan my future 40k army.

Clash, you just proved again that modding is a good thing.

Looks good, I just downloaded it and it's really fun but their was a few things that irked me like the basic animations and how the bolter is single fire and the Heavy bolter imo doesn't fire fast enough but all in all it's a good mod.

Also following up with the request for a sound guy is it alright if I rip sounds from games like Dawn of War 2 and Spacemarine for you guys or do you have a problem with that?

yes , we are not ripping off commercial sounds.
but you can change those for yourself

I am not familiar with the licensing for use of content from those games, so I have to assume the follow the general industry pattern of being licensed for personal use only (no redistribution). Since we cannot assume that everyone who downloads the mod also has those games I would have to say "No we can't include any of those sounds or any sounds based on them in the mod".

However we can use any sound in the Source SDK (pretty much all of HL2) and modify them any way we want (and potentially sounds from all Valve's other Source games, but i'd need to check on that).

PS if you want to port sounds from commercial games into EX for your personal use nobody will be bothered, we just can't include them in the actual mod.

Well Chrome I recall testing this out with you a good while back. Glad to see the development still goes well my friend. Looking forward to playing this one as soon as I am able.

more team members neeeded or not going to happen.
Or it will happen after 6 years or so