GraviNULL, a refreshing unique new mod that has been in development for 6 days.

'GraviNULL? What's that?' you say.

Gravi stands for Gravity, NULL for Zero, in short it's a mod about zero gravity, but also about electrocuting friend and foe, or flinging yourself around at high speeds by using a grapple beam.

GraviNULL is the one and only mod that combines zero gravity, grapple beams and electrocuting mines together into a bundle of mindless fun!

It all started sunday the 17th of January 2010, when DuckSauce that crazy goon from the mod FragOut had a burst of inspiration(...again), a mod about fighting in Zero Gravity, but how would they move? And just adding guns for combat wouldn't be very original either! It just so happened he worked on a mod a while ago that was gonna be called WarBall, it featured a ball that both a bomb that had to be armed at a set location and a weapon you could toss at every fool that dared to stop you from doing so! The idea of the WarBall was originally from Bekey from the mod Morning's Faith and used the rollermine model and a very small bit of it's electrifying sexy... I mean deadly code.

However WarBall was put on hold, however 17th January it proved the WarBall idea could make for interesting gameplay and after a long brainstorming session with Bekey, GraviNULL was born and development started, usage of the WarBall idea approved by Bekey. Having the advantage of already having a few basic coding things done in WarBall, development was sped up significantly and the very next day I hooked up William, Bekey and Mastix for a small playtest session.

*Shiver* it was very basic in it's all forms, trying to fight was fairly difficult and the mines would more often kill you because you happened to bump into them then that it was because of enemies punting them towards you.

However the general idea was approved and very valuable feedback came out of this small playtest session.

The next day things had improved a bit and another playtest was held, not a whole lot game changing changed but still most of the feedback from the day before had been addressed, mines could now be punted to supercharge them and they wouldn't deal damage unless they have been charged, this prevented a lot of frustrating deaths due to simply bumping in to the mines.

The next two days were spent getting a nice grapple effect, basic movement was soon improved, now all that was left was the effect, I went through altered rollermine shock beam, to ropes, to a particle effect, to shock beams, to ropes and finally tried to use the gravity gun punting beam, which turned out to work amazingly well, I had already moved the grapple beam code from server to client by then and so it also work without any lagg.

It was late then so a test had to wait yet another day, finally the next day(which was yesterday the 23th of January) another test was held in the morning... but ouch! It appeared to be like I feared, the beam effect was only visible for the players own beam.

Most of that day and some very valuable advice from Biohazard_90 later the beams were werking perfect and also client side in such a way they were visible for all to see!

By now you must be curious what this looked like, well here's some screenshots and a video! 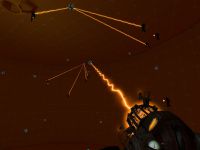 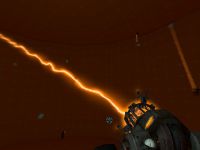 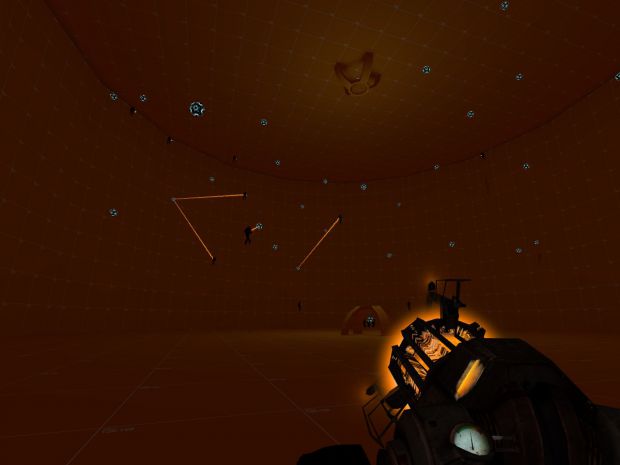 That day a demo recording was taken of the fun time Bekey and DuckSauce had grappling around the map, the very next day it was uploaded on YouTube and ModDB to gather more interest for the mod.
Behold the mighty sexy Grapple Beam in action:


As you will notice, there's little to none fighting going on, the high focus on getting a fun grapple pull and grapple beam working meant also that combat had been put on a backburner.

However, it's only been 6 good days so far, what can you expect to do see before release?
First of all, GraviNULL's first goal is to release a fun and playable alpha version with one or two maps, this means you won't find alot of new content, but gameplay has the priority and should hopefully prove very enjoyable and entertaining! Bugs should hopefully be down to a minimum as well, cause I'm not just a developer, but a player as well and I hate bugs as much as anyone! Proper playtesting will be done before release, to weed out bugs as best as we can. Games and mods perform differently on every computer, so 100% bug free it will probably not be, we hope you will forgive us for that when the time comes and you have a bug.

Should the alpha release yield a positive responsive for the community, development of the mod will continue with more content(maps, new textures/props) and more gamemodes!

That was all for this first newspost, I hope it kept you entertained and if this mod interests you, don't forget to click that Track now button!

This looks cool. I'll be tracking.

Looks sweet, i think ive worked out how you did it (the grappling system) is it that you extended the reach of the gravity gun and fixed those balls to there places whist turning the gravity to 0 which insted of pulling the balls to you, will pull you to the balls (because theyre fixed) great idea (:

Actually the balls aren't fixed ;)
But yeah that's basically what I've done, the reach is extended alot to make it easier to grapple onto them, when the player is grappled on I set a networked Handle so that the client side can create the beam between the player and the mines.

Server side in the SecondaryAttack function I simply need to do some simple Vector math to create a pull direction, a bool is used here to check if it pulled already, if not it starts the player off with a 5x as strong pull to get them moving at a nice speed, from then on simply keep adding the standard rate of velocity every 10th of a second until the player de-grapples.

So you pretty much guessed it right! But like I said the mines aren't fixed, they have physics, they're currently a modified weapon entity that can't be picked up and overrides FallThink and FallInit to prevent it from spawning onto the floor instead of where it's put in Hammer.

Well I did once think about it, so I opened Garry's Mod and turned sv_gravity to 0.

Thanks for the comments people ;)
Helps keep me motivated hehe.

Just some quick news, two mappers have been added to the team to replace Bekey(who said he gave up... 5 times or so already, I didn't keep count but maybe this will motivate even him as well) regardless that should hopefully mean at least 2 maps coming up. Without dev textures ^^

Thanks for tracking as well!

Awesome stuff DuckSauce! Such a great idea! I pimped this on Podcast 17 last night :D

Bekey told me you did :D
Thanks man! :D

Hehe cool thing DuckSauce! Do you plan on adding some animations though? Since the players seem to be in air most of the time it would be neat to have some blended swinging anims :).

Who knows? Certainly not in the first release though. But ya never know!

This looks great. I can't wait to see further production.

is it possible this will work with other objects? then it could potentially use any map, and full weapon set. it could be the new physics-based hl2mp.

It could, but I'm not intending to swing that way, sorry ;)

Ducky, you crazy foe. I kind of like the idea. At least one map should definitely feature earth's orbit with earth itself, moon and stars as a skybox.
I dont like the mod name though. Gravinull doesnt seem so creative.
How about Anti-Gravity-Sanity. No? :(

Anti-Gravity-Sanity... sound crazy! I'll admit though, GraviNULL isn't the best name ever thought of, but heck, how else to call it?
Besides I'm a programmer, the NULL makes it more unique I think, bit of an inside joke for all programmers(if you find that hard to spell, just say people that code stuff :P)

Anyway, I did the basic changes that should make combat bearable, but lagg currently has WAY too much of an influence on it, so a video of Zero Gravity combat will have to wait till I straigten that stuff out as much as I can!

Right, this looks like ti'll be some pretty fun game.
Gonna track. ^^