Introducing a new game, Epilepsy Simulator. It was developed for a two-week game design competition by Daniel Ilett and Tom Dove. It eplilep-tastic.

After staving off sleep for the past couple days, me and my friend Tom finished (well, sort of) our entry for the Warwick Game Design society's two-week challenge, which had a theme of 'reflect'. I showed a screenshot of it in a post over on my WordPress blog, but it's come so far since then. It's now got a name, Epilepsy Simulator 2014, which is only half a joke, because it will probably give you epilepsy (disclaimer: if you have epilepsy and play it, please don't sue, we're too nice to go to jail). So without further waffling, here's a short video!


The basic premise of the game is: you have a laser gun. Black spheres drop down and try to kill you by touching you. Stave off said spheres using the laser gun. The laser will reflect off the walls, and when a sphere crashes into the wall, it has a chance of activating a strobe light on that tile of the wall (this is where the epilepsy starts). The lights get all colourful sometimes, and the more lights going, the easier it is to see the enemy spheres. The laser was ripped straight from one of my old projects, and was one of the easier bits to add. 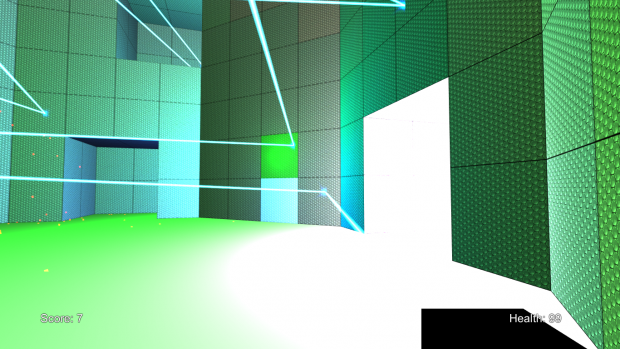 It looks so pretty when everything's lit up like this.

Tom (the other guy who was making this with me. Lives in the same flat as me. Cool guy.) had never used Unity before, so a lot of the programming for this project was me showing him how to do stuff with Unity, but he's learning very quickly, much quicker than I did in the beginning. He also made the textures for the walls, which are about three times better than what I would've come up with, so have a gold star, Tom! 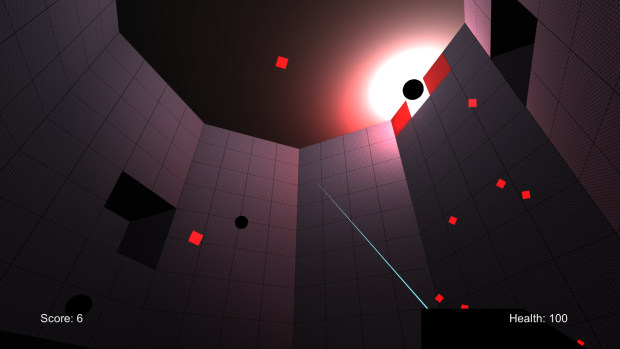 The next competition, which started yesterday has a theme of 'Spooky', which we're currently in the process of thinking up ideas for. We didn't win this first competition (sadface), but this game was so fun to make (because it's completely bonkers), so here's to another two weeks of game design. Also, the music isn't ours, it's Savant - Snake Eyes, but if we ever use this project for anything that's not just for fun, we'll change it.

"which is only half a joke" Epilepsy is nothing to joke about. Speaking from someone who has it.

I'm sorry if the game offends you. It's really not meant to be anything serious, and of course epilepsy isn't something to joke about.

I'm not really offended :P It's cool. Definitely won't be trying it out though. I appreciated the warning.

Ah good :P. We could add a mode without all the strobe lights possibly?

That would be cool. You don't have to turn them off completely its the very fast flashing that is a problem. Just slow er down :P

Oh, all what we need now is a seizure simulator.