The fifth iteration of the Elite Force mod for SWAT 4 is available now!

I'd like to preface this by thanking everyone for the positive feedback on our little community (on our Discord especially: Discord.gg) that we've fostered in developing this mod. Your guys's enthusiasm has been very appreciated, and I enjoy replying to the comments and questions that have come up. Thank you, and thanks to those on Patreon as well who have supported me, and the other developers on this project who have helped make Elite Force from something simple to something spectacular.

Coming from v4, the first thing we wanted to look at was equipment. We contacted the developers of the SAS Mod, and got their blessing to use some of the SAS Mod's weapons in our mod. These weapons fit right into the game we felt. Of course, that required totally new changes to the unlocks system, and so we developed a system of two unlocks for missions. 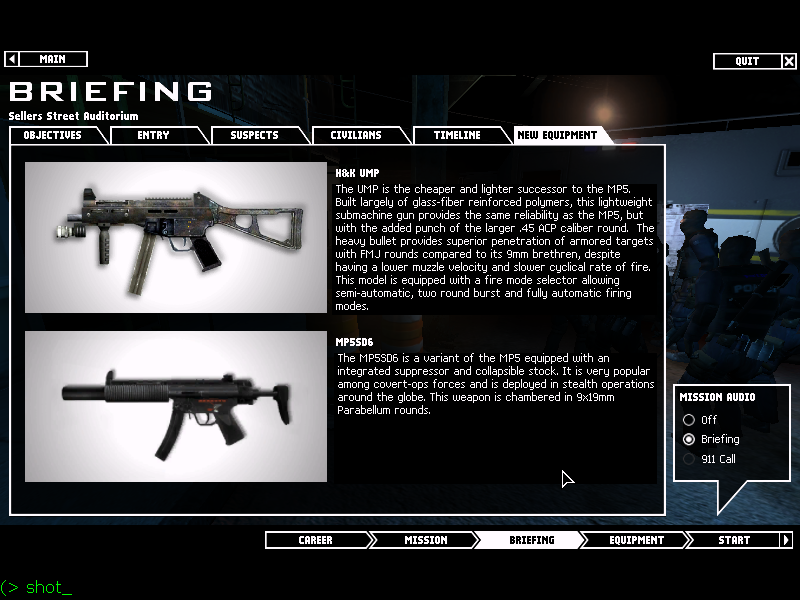 Up to two pieces of equipment can now be unlocked per mission. 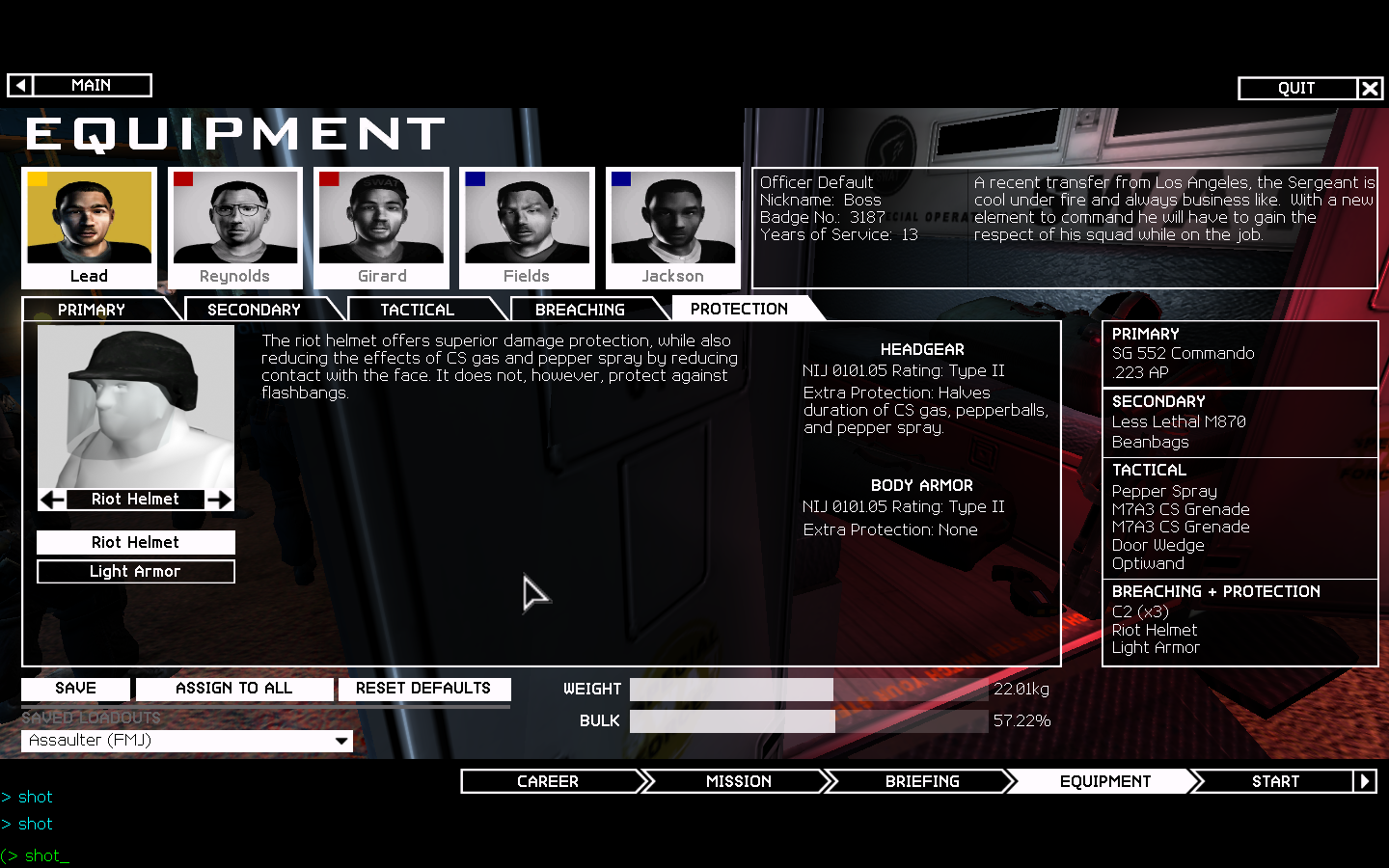 The Protection panel now lists advanced information about your headgear and body armor. 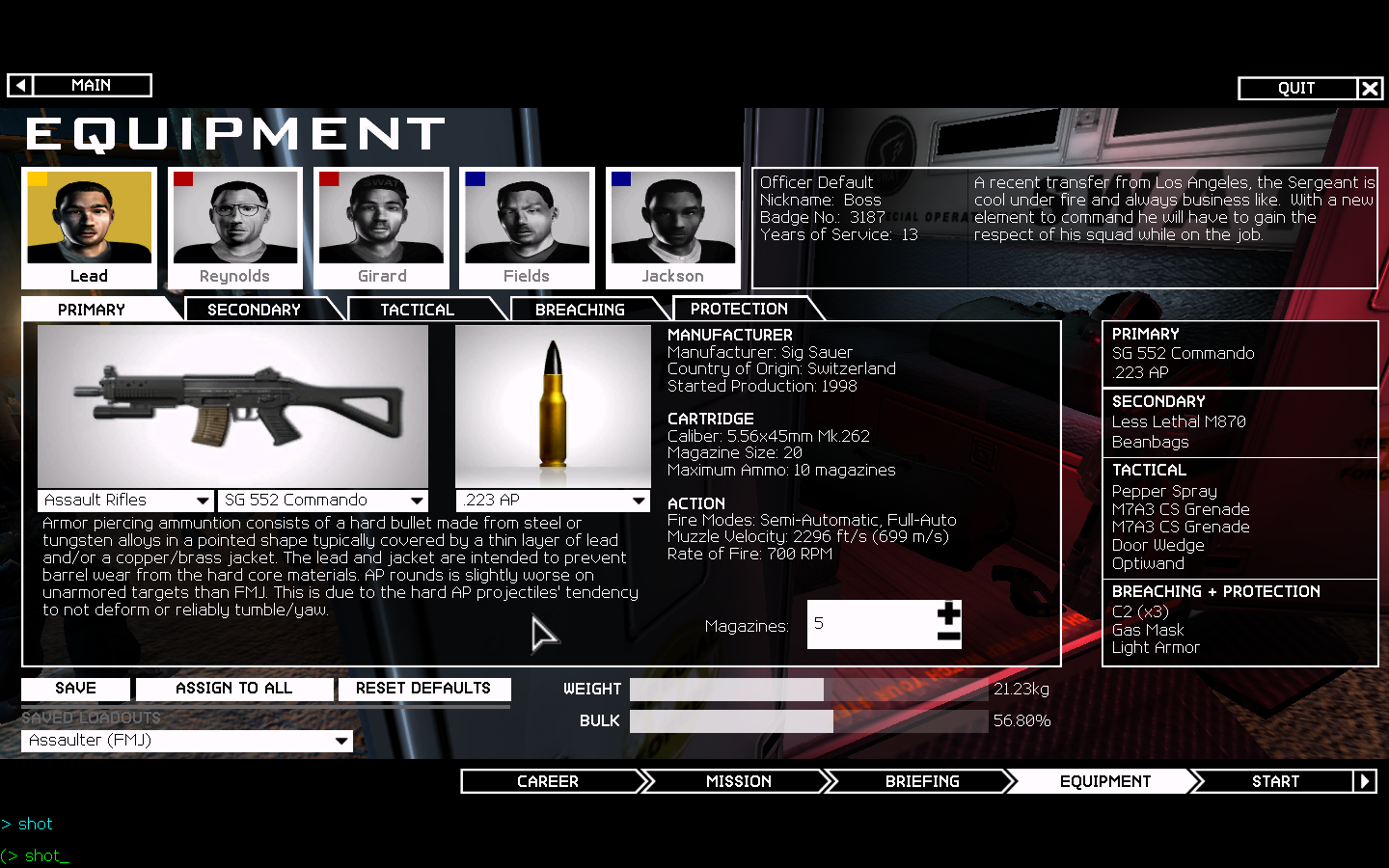 There are all kinds of new weapons and ammo types, and the menus have been changed to use dropdown boxes to fit all of your shiny new gear!

In V4, one of the major things we wanted to do was a rewrite of the entire weapons system, so that people could add new weapons to the game without having to edit the code. This failed, largely because of some unforeseen issues deep in the engine. In V5, the focus was put towards making weapons that were easy to create, but still needed code to back them up. Thankfully, we've made it so that only a single line of code is needed to add a new weapon into the game. Since the source code is freely available online, there's plenty of examples for people to draw upon. 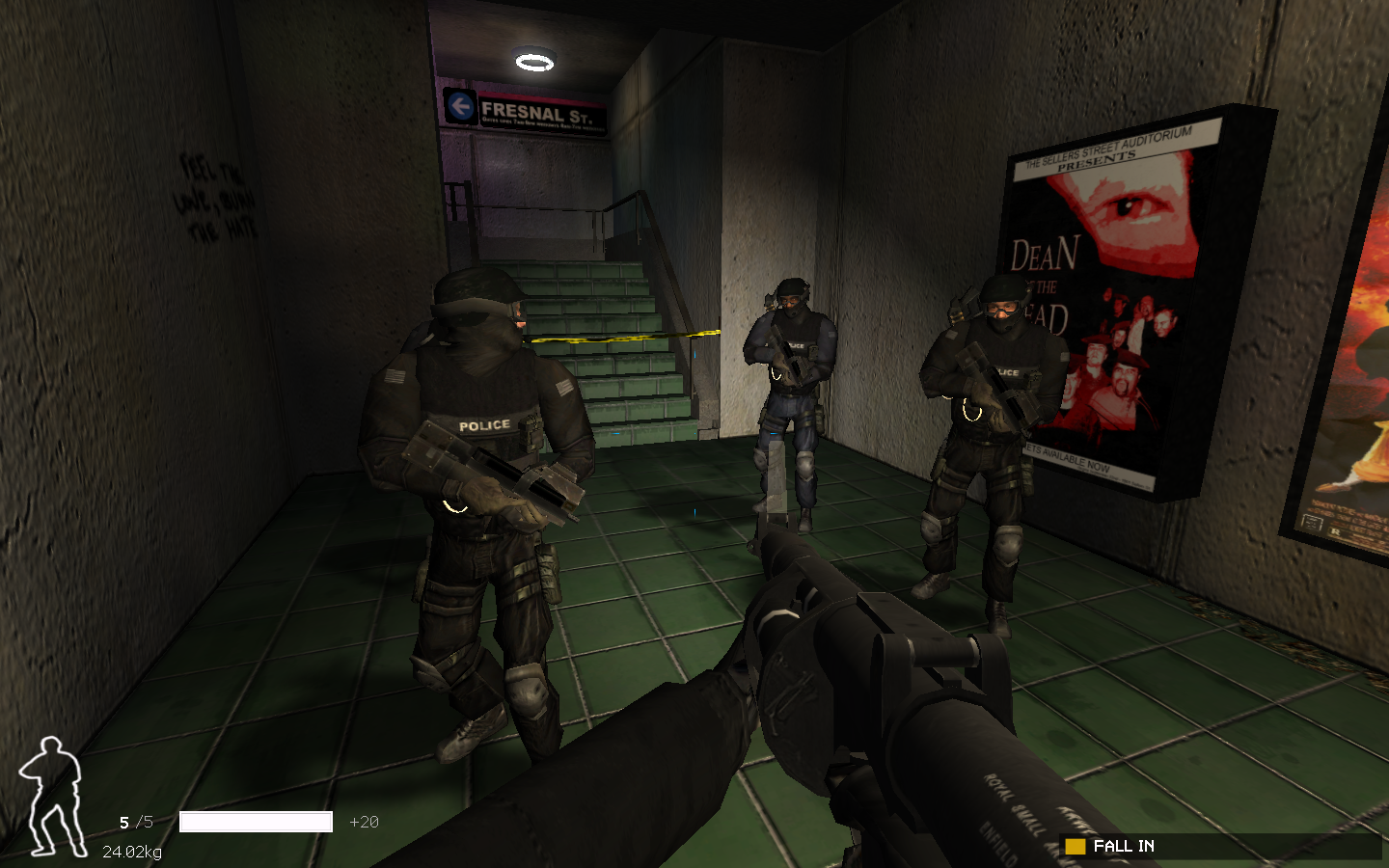 The animations that officers use for their weapons is now defined in external files. The P90 had broken animations in the Stetchkov Syndicate - these are now fixed! 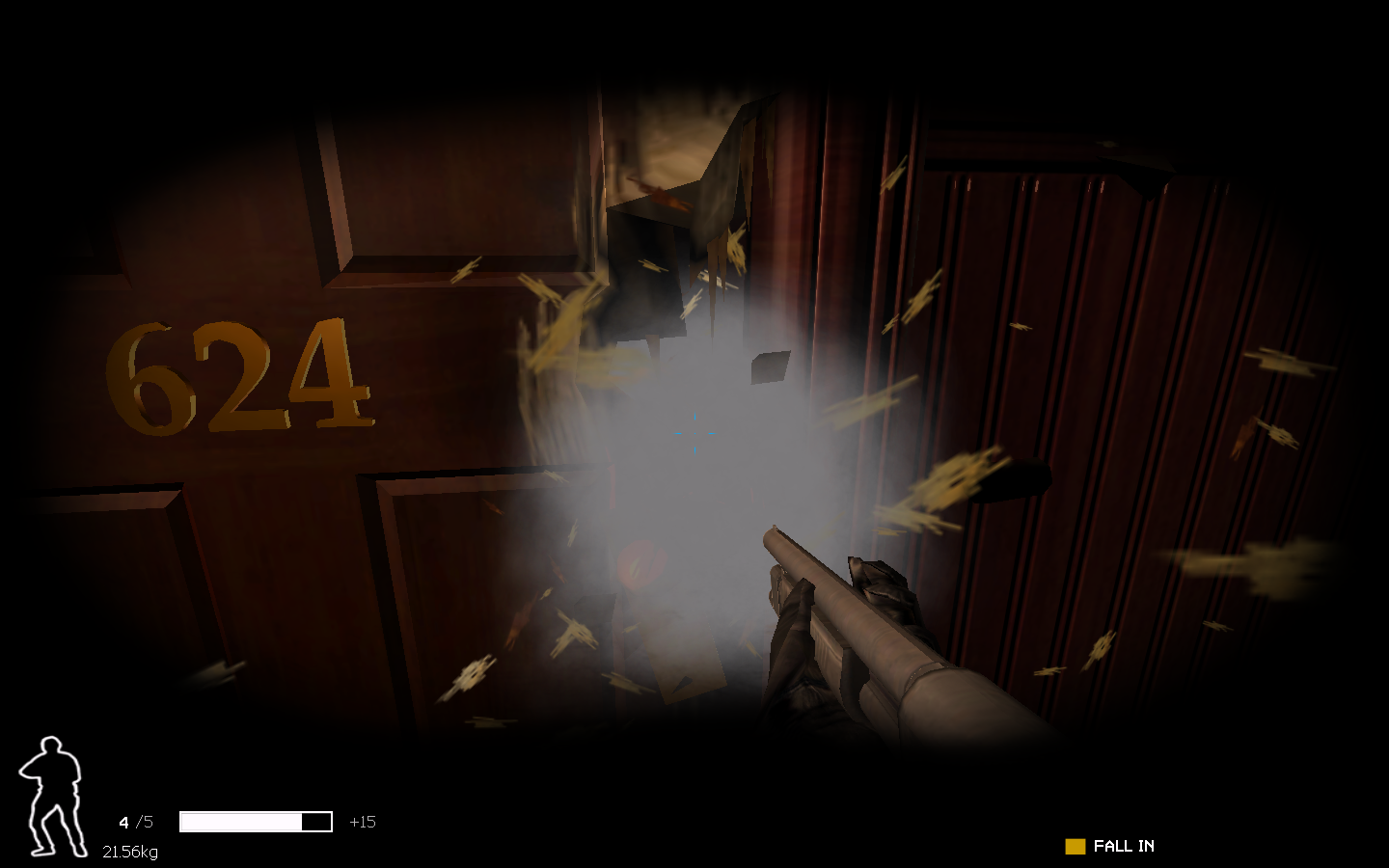 Any non-beanbag shotgun can blast through door locks. Just be careful of ricochet.

After focusing on equipment, our attention was on new ways to play. Permadeath and All Missions were among the first things to be implemented in v5 (our efforts towards equipment in v5 actually started in v4 production). Later, DOA conversions would make this interesting. Campaign CO-OP and multiplayer were totally nightmarish and the majority of the bugs that had to be fixed stemmed from Campaign CO-OP. But overall I think it adds a lot of value for people. 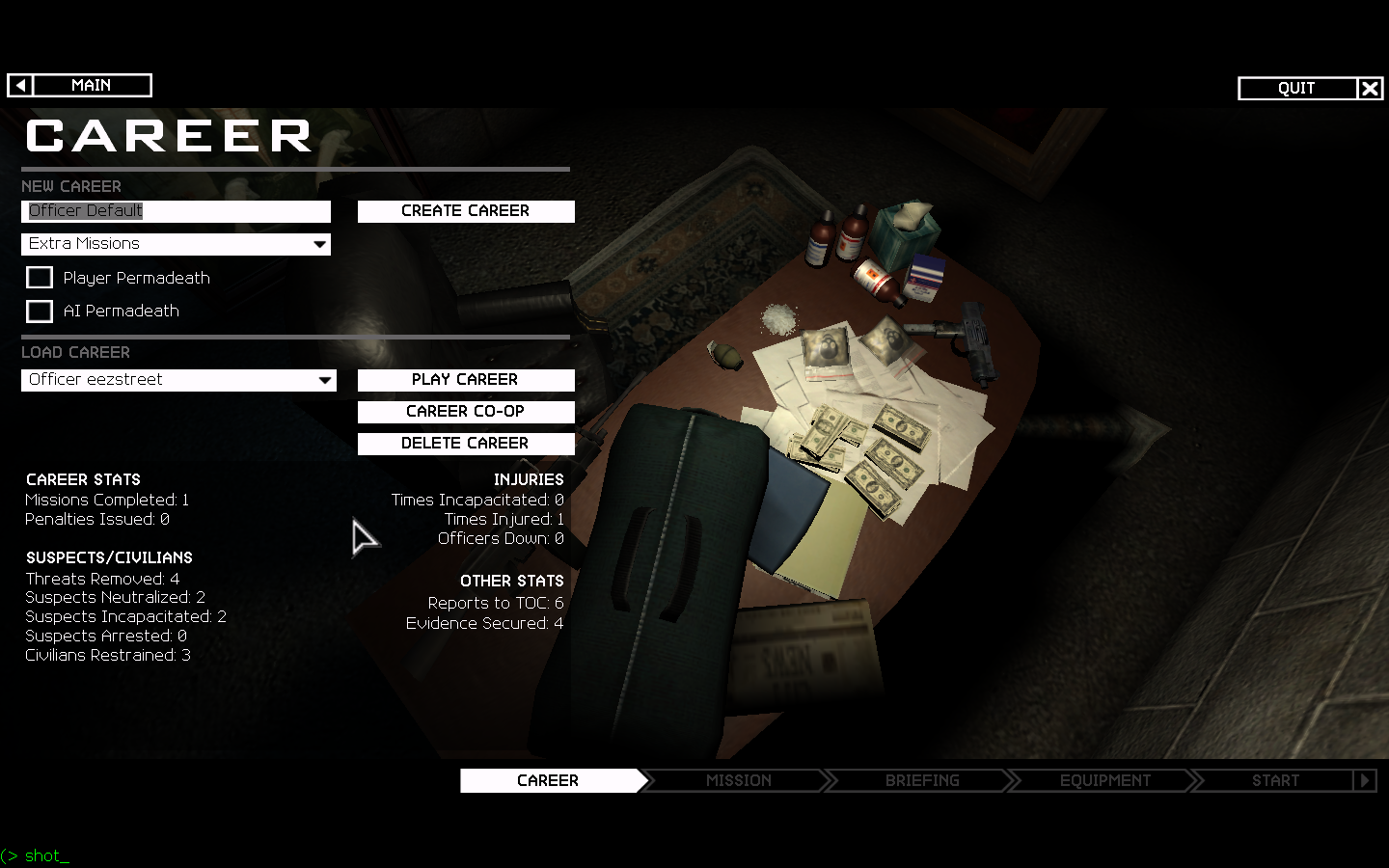 There's lots of new ways to enjoy the singleplayer campaign - like with custom maps, Permadeath, or even enlisting the help of your friends to complete it. Your stats are tracked, either way. 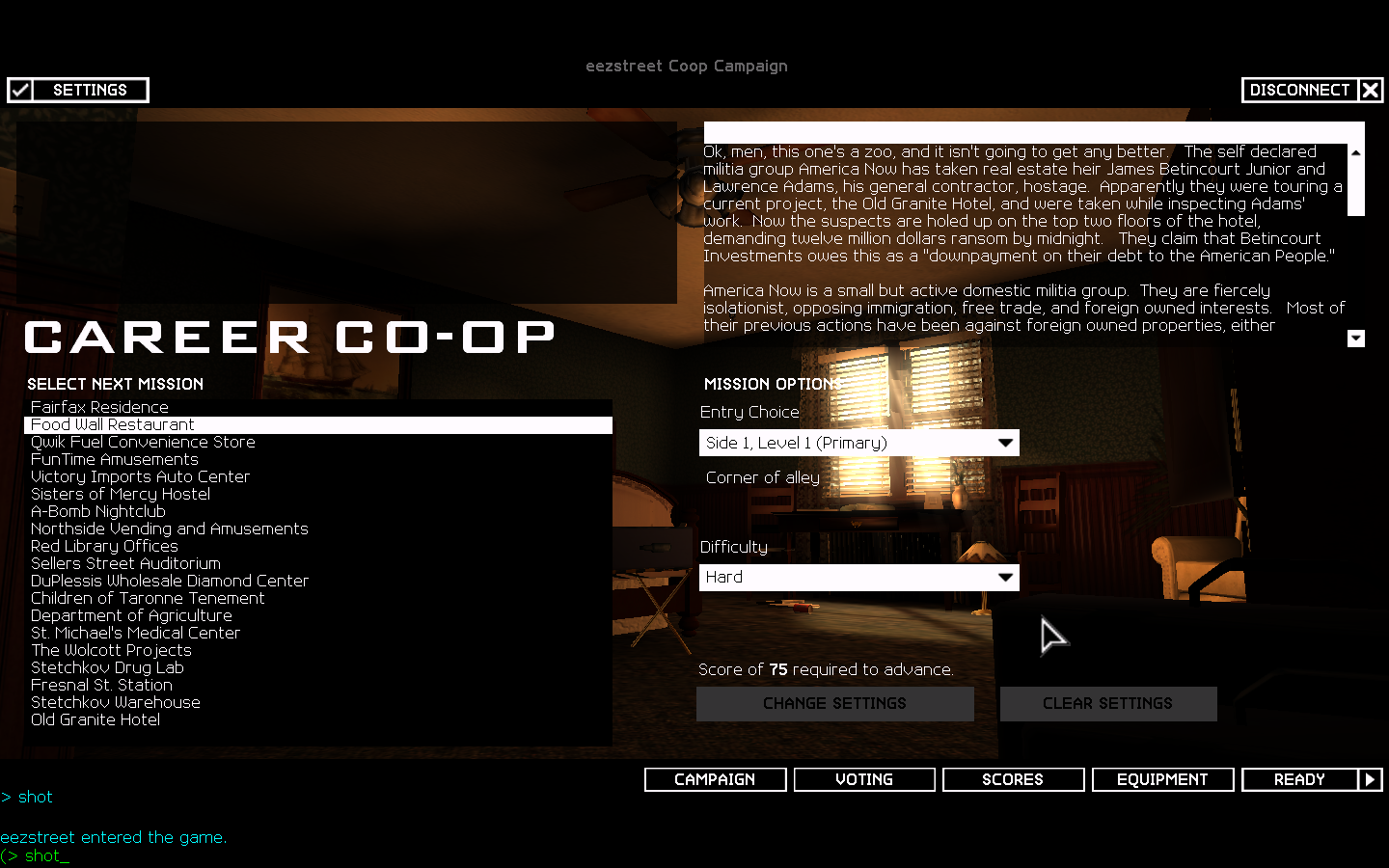 After completing a mission in Career CO-OP, you can pick an entry and difficulty for the next mission.

The AI also received a substantial upgrade. They can now take cover, including behind low objects, or leaning around corners during firefights. The enemy AI is also more responsive, and will swear when you shoot their friends (or apologize when they hurt their own...) 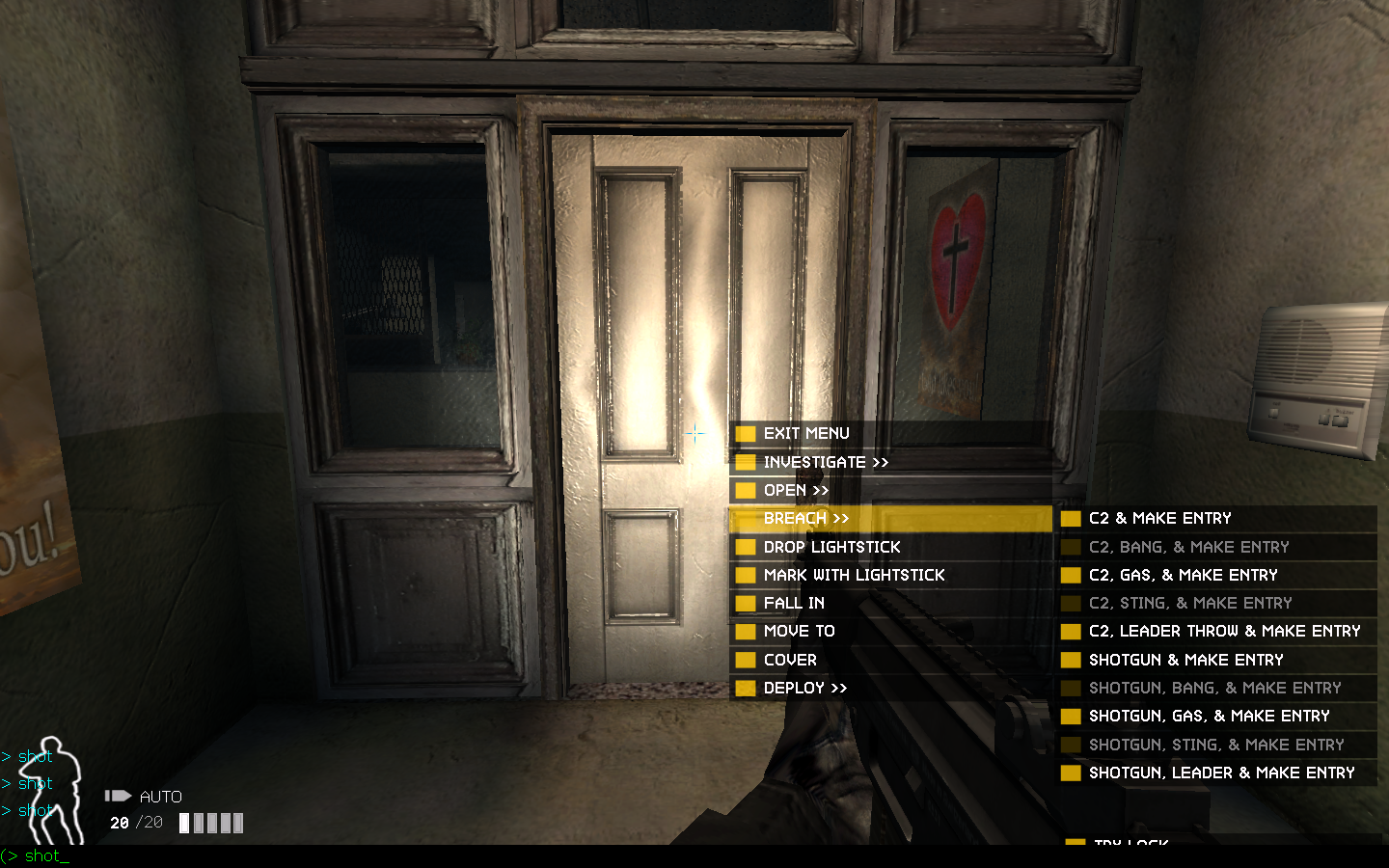 The AI can now be ordered to pick a specific breaching method. 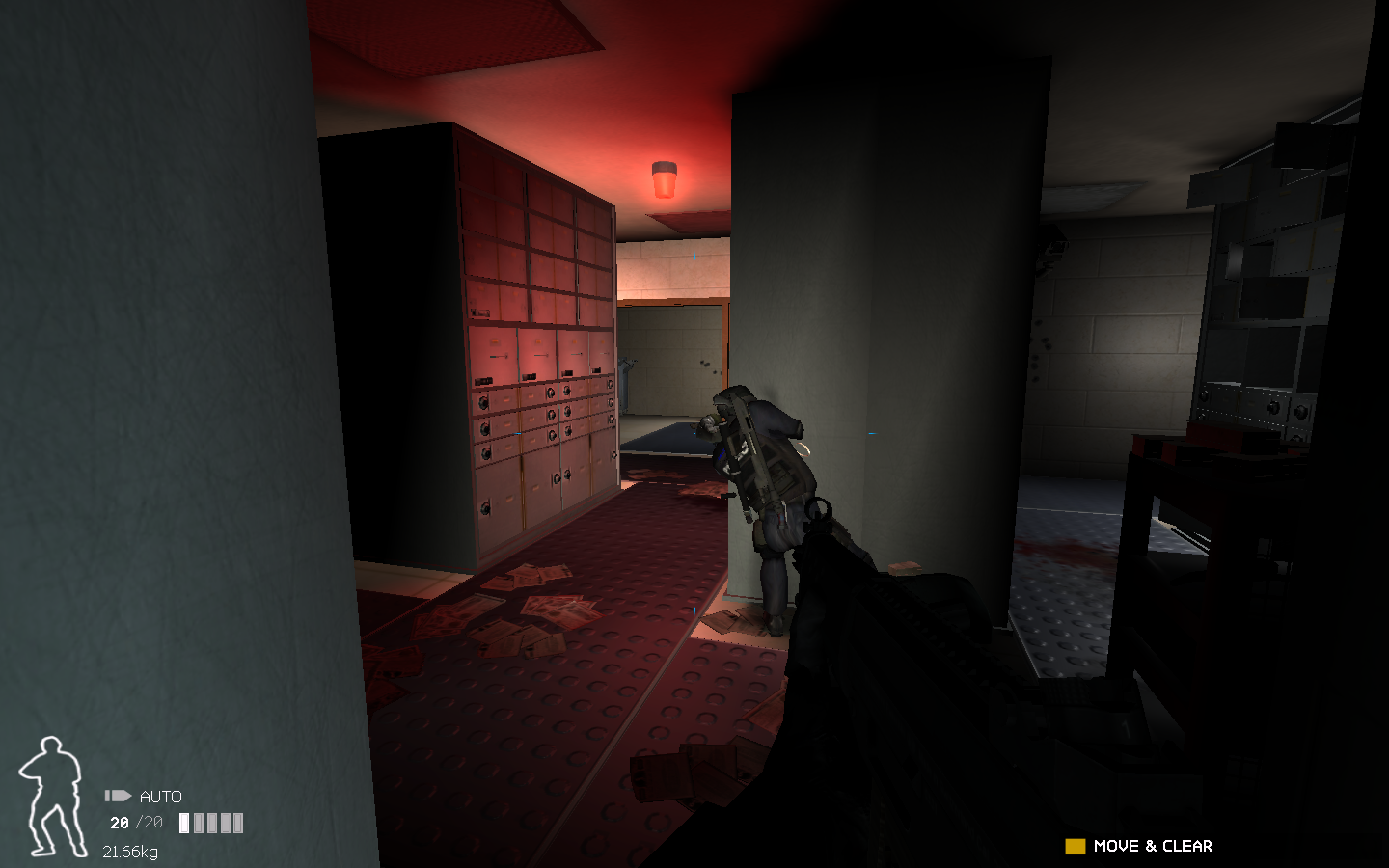 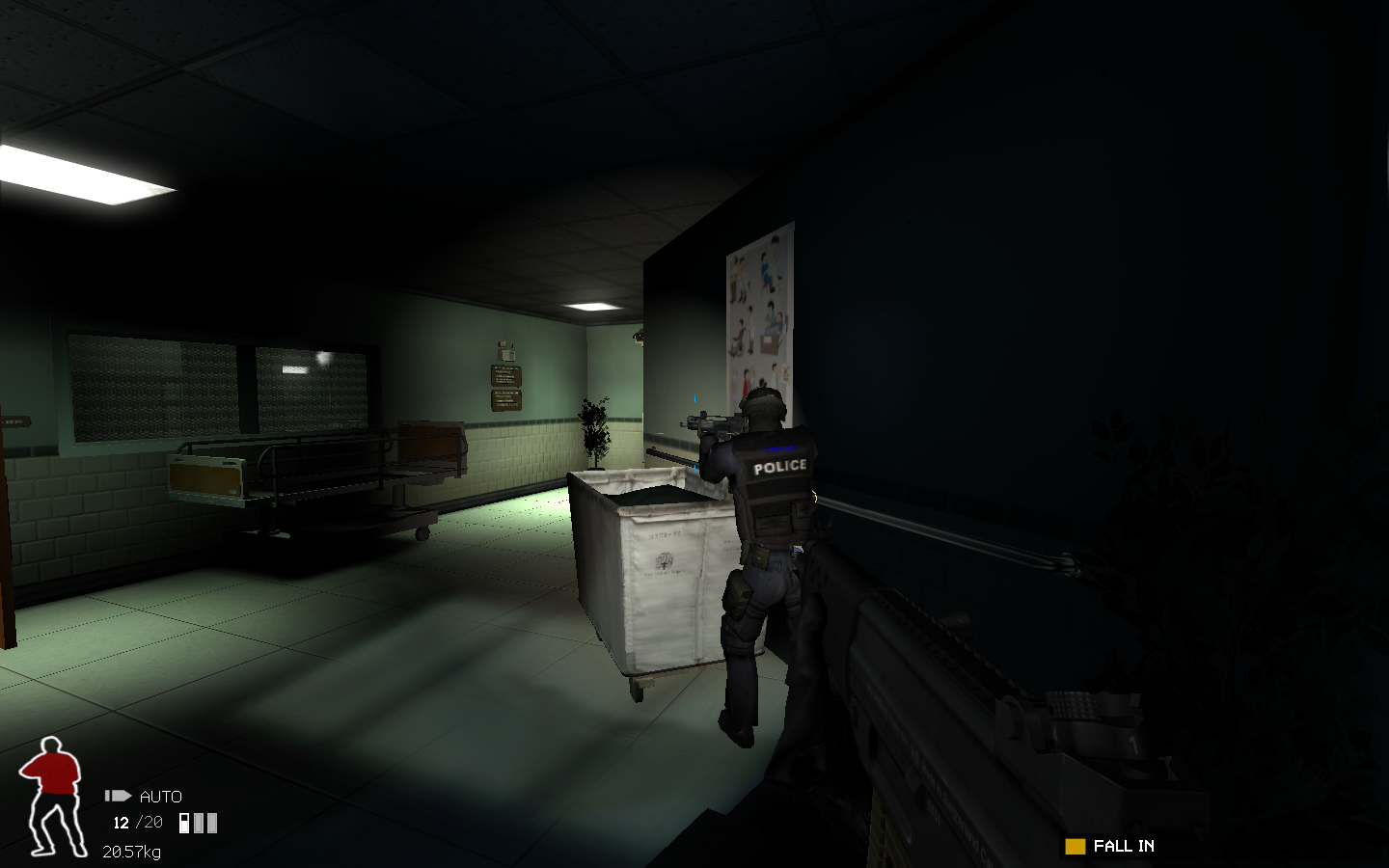 The SWAT and Suspect AI can use cover to their advantage when faced by a foe. 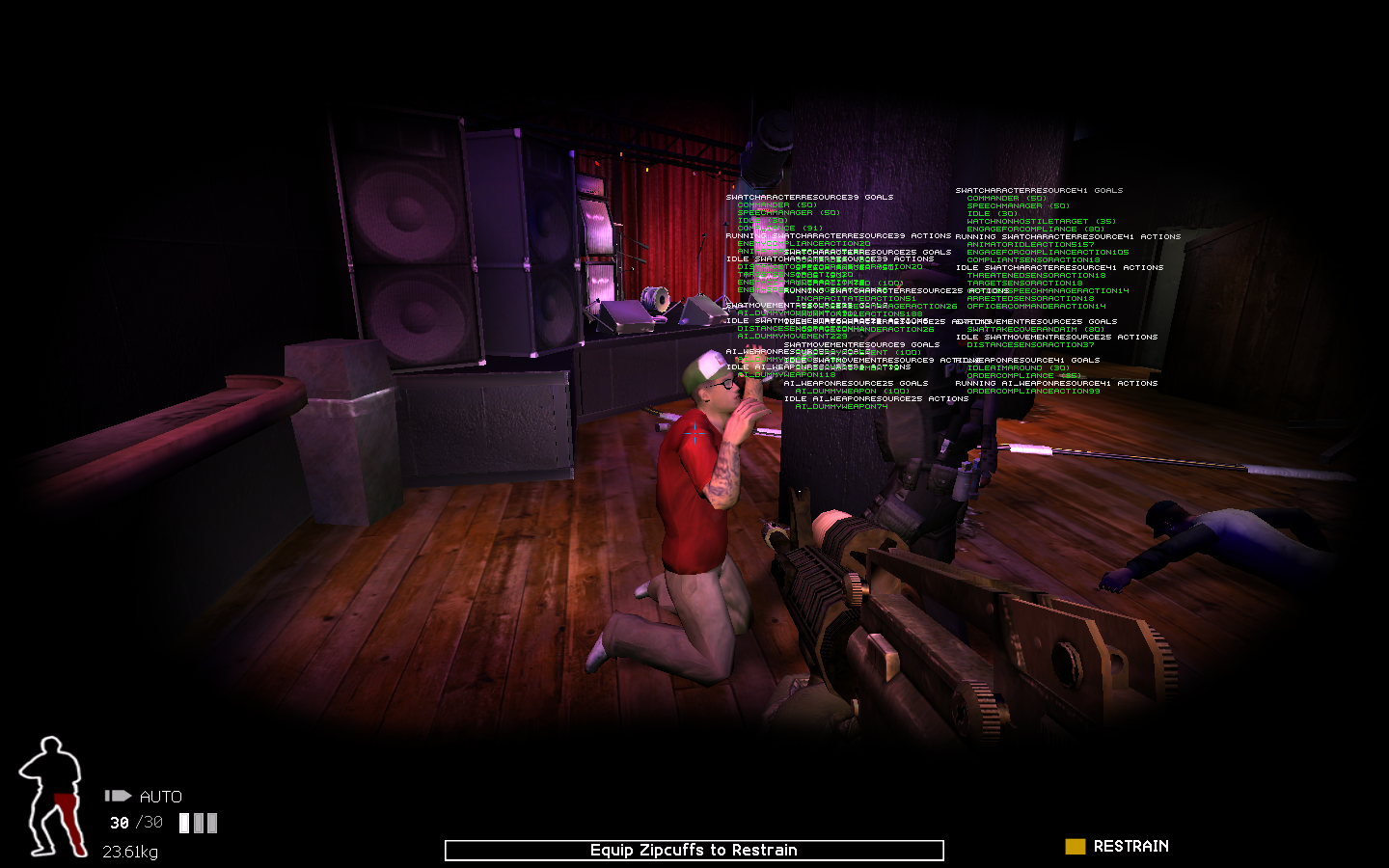 However dumb the AI may have seemed, it was actually quite intelligent; just hampered by bugs.

A full list of the changes provided in V5 is available here: Markdownshare.com

Not an April fools, enjoy guys! We have lots of stuff planned for V6, nothing to disclose yet so stay tuned :)

What happened to your avatar?

Hi, I'm glad you asked. The weapons were modified so that similar classes of weapons have similar handling. For instance, the M4A1 and G36C have similar accuracy, but different recoil, muzzle velocity, weight, etc to differentiate the two. It's based in large part on the length of the weapon.

Generally, long weapons are more accurate, while pistols are a little less accurate now. Shotguns are about the same in terms of accuracy, but their "choke" value (the spread of the projectiles) is slightly higher.

This is a very impressive work. Thank you so much for improving this already awesome game while staying true to it. This is my all time favorite mod for sure!

should have waited one day for this announcement saving you the April Fool confusion :-) . great job by the way!

You're on the front page, but they didn't mention Campaign Co-op, that's our flagship feature for v5!!

Awesome mod! I do have a bug to report, it seems the AI cant use the breaching shotgun, the doors just dont break when used by AI.

that's a known issue and will be addressed in a patch

Game froze on a custom map, Operation Apollo, when I encountered the first enemy; are they officially supported yet?

Is it possible to have the batch files that start up the game use the start command so you don't have a command prompt window lying around?

There still seem to be some empty speaker entries in the SoundEffects file but they don't seem to show up in-game so not sure if they're still a problem.

There may be issues with some maps, that would really be up to the individual maps. I tested it with Skytower and that map seemed to work fine.

Is that april fools? :D

Any reason why the bots were dropped from campaign co-op? It'll make playing the campaign co-op with less than a full group of players either very difficult or impossible I'd think.

They were never in campaign coop to begin with. Its still coop so bots were not added. They are looking into it as it is a highly requested feature (bots for MP in general) but nothing yet.

1) You can adjust pebberball ammo, but only up to 99 and it will still give 200
If you go over any other loadout than the adjust pebberball, it will reset it to 20 again.
--> EX: Lead adjusted to 99 ammo for PB-gun | proceed to adjust Jackson's Shotgun ammo to 22 | Lead's ammo is now 20 again.

Thanks for the information about the pepperball gun. I will look into it.

As for #2, if you're referring to AI-controlled officers, this is a known issue and will be addressed in a patch.

If you want to adjust equipment ammo, open up the SEF System folder, go to the SwatEquipment config file, and then search for Pepperball Weapon. You can simply edit the magazine size from 200 to 300 or whatever you want. You can also do this with other weapons as well. :)

I have issues. I can't execute the "LaunchSEF" or "LaunchSwatED"

Hi, please verify that the Stetchkov Syndicate expansion is installed and make sure that the mod is installed correctly (see the tutorial if you need help)

That was the problem, thank you!
Also, theres other way to Breach the door without the C2? (Cuz the Shotgun don't work) or u going to fix that?

Hi guys, thanks for the amazing work!

This mod works with GEM but not SSF, SAS, or 11-99 Enhanced because those mods alter the code, which this game also does.

That being said, the weapons from SAS are in this mod as well and the command interface is similar to the one in 11-99 Enhanced.

Anybody knows how to start multiplayer/coop in SEF or Swat 4 in general without gameranger?

Hi! Thanks a lot for the mod! Love it! Bit of a problem though.. i tried to play with a friend and after installing this:
Github.com

We finally found some servers and were able to play few rounds. But when i tried to host a game (or friend did) we can't seem to be able to connect each other? Used whatsmyip.com for our ip and firewall isn't the problem.. Any suggestions? There are only few servers with your mod out there and even fewer that actually work :D

So long story short.. we're not able to connect directly in swat or in the expansion or with your mod. Both have Gog.com gold editions..

Thanks a lot, Lancelot!

Is there a chance we might be able to change the officer's skins for SP as you would in MP?

That would be nice!