Hey Guys, Just wanted to let you guys know that the Europe In Ruins Warmap Beta testing phase is set to commence in about one week. The Dev team is in need of 30-40 active players to participate in the Beta testing. In anticipation of this event, I have gone ahead and created 8 competitions in which players can compete for these beta slots. All 8 contests will be judged on Friday, December 17th, and the top 3 entries for each competition will receive Beta test slots to participate in the War

Just wanted to stop by and give everyone a status update on what's been cookin in the Devs fourms.

So I present to you:

Europe in Ruins has been inducted into the ModDB Mod Hall of Fame, as most of you may know already.

The Dev team would like to thank the community for all your patience, cooperation and loyalty to the mod over the last 3 years. Without you guys kicking us in the butt every now and then, we would have ground to a halt along time ago. It has been all of your steadfast dedication to the mod that has kept us going. People may leave, but others step up to carry on the mantle, some in overt ways, some, subtle, yet no less important and for that we say thank you!

Here's the link to the ModDB HoF comment page, give us a plug if you got the time!

Something like "EIR is the BEST CoH mod EVAR!" Shall do the trick. :)


Now, onto the meat and potatos of this Release


We are one week away from the Warmap Closed Beta Testing, so I will take this time to give you all some information on how the warmap is going to function and how you can make it into the closed beta testing!

I tried to make it out of the Dev cave with some photographic intelligence on what the Warmap will look like, but it all got blurred out in the heavy rain as I escaped under the machine gun fire.

All that remains is this one photograph that we have to go by. 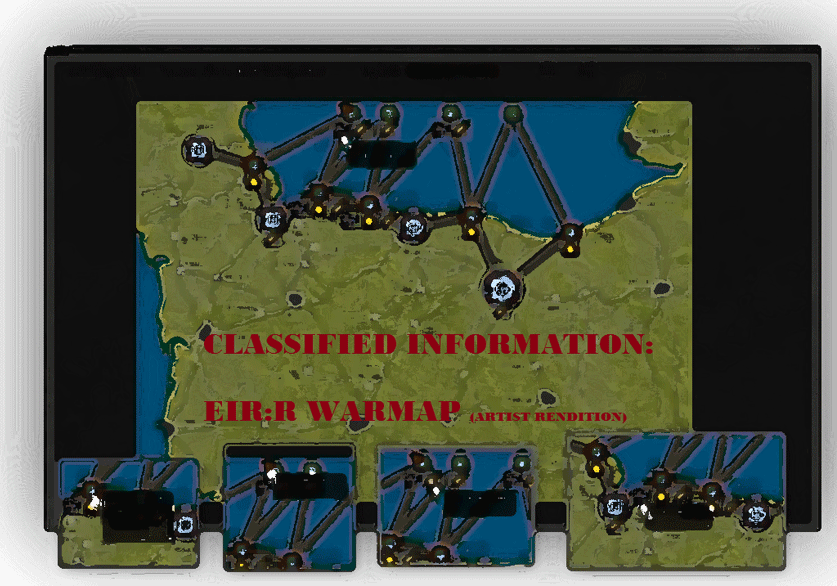 I do however, have this intercepted telegraph communication on the warmap will function when it is released:

Quoted from EIRRMOD:
Sectors
-Owner (Axis, Allied or None)
-Axis/Allied Strength
Total of unit attack/defend, these are like pieces on the warmap ala risk/axis & allies board games; Infantry, Tanks, Whatever we name them and they are good or weak vs soft/vehicle/armour

-Axis/Allied Activity
This is based on how many players are deployed & 'activated' in that sector - if a player was active a few turns ago, the number will add say 1 'point' while an active player for the current turn is 4 'points' towards this total. Players dont see the number, they only see a description (Eg. High Axis activity, or Low Allied presence)

-Intel
Each player can see into sectors, only when they are deployed into them
(Base intel level) - or spend action points to increase the intel level
(eg, scouting or 'spying') - the higher your warmap rank, the higher
your default intel level is, and the cheaper it is to scout/spy.

-Sector Display
Im currently working on this. Its a bit of a bitch cos I want to allow people to view PREVIOUS turns - and the past turns actions (results) The sector display shows 2-5 Territories which are to be fought over. Smaller sectors will be 2, while larger, more important sectors will be 5. Sectors can range between 2-5.

At each of these sectors will be the pieces, each turn, they will attack with their weapons - but
randomly, and thats all. Its up to the players to Move pieces, set targets (if they want to focus fire for example) or call / use artillerypieces.

After a sector has no enemy units in any of the sectors - the enemy is forced to retreat. The units in their reserve will retreat to a connected sector(s) randomly.

Other than the extra bits (from card play) - this is the basics of the war map ;)

So take all this with a grain of salt, and interpret this how you will.

Now this brings us to the fun part. :)

We need approximately 30-40 beta testers for the warmap release.

So being the sadistic nutjob that I am, I have devised a series of fourm
and In-Game contests for you to enter in order to secure one of these
sacred Beta slots. (Bwahahahah!)

Here's how all the contests will work:

All that is needed to enter the competition(s) of your choosing is to just
follow the criteria listed in the thread. You can enter as many
competitions as you want, with as many entries as you want.

Top 3 entries for each competition get beta slots unless I say otherwise, the
rest shall get some Reward Unit points to play around with.

Best Shoutcast of an EIRR game that is not done by me! (Yes!)


Each of these contests will receive their own threads and instructions very
soon, i just gotta type them up. I tried to find a little bit of something for everyone to do, but bottom line, Tank130 is already in, so you guys got 39ish spaces to
fight over. :)

All contests shall run for 1 week and end on the 25th, at which point in
time, they will be judged and the list of Closed Beta Testers will be
released for the Warmap testing phase starting that weekend.

Thats all I got everyone, enjoy your week of jumping through hoops. ;)