Eastern Front Patch 1.20 Changelog 'The Great Patriotic War' A mass of changes bringing the Soviets a leap towards completion and the vanilla sides that extra final step towards the balance they deserve.

Patch 1.20 is an immense upgrade, if not re-design, of the Soviet side. As voted for by our community, the Soviets now receive veterancy in a mixed fashion merging the ideals of the American side, with the unique battle changing upgrades of the Soviets. Along with this all Soviet Units aside from the NKVD Conscripts (now renamed to represent the Penal troops of the Soviet army) can retreat from battle; and live to fight another day - a needed addition considering the new inclusion of hard earned veterancy.

On top of this we are very happy to announce the inclusion of Reward units that do NOT require Tales of Valour; created by skilled members of the CoH modding community. The ToV reward units are of course not available unless you own ToV, nonetheless the EF ones however are available to all - giving a little extra to those Allied/Axis fans out there.

On top of these already large inclusions, we have broken from protocol and set out tobalance the vanilla game with the help of skilled expert players, finally fixing many of the long term balance issues seen in CoH.

Update your Launcher!
or 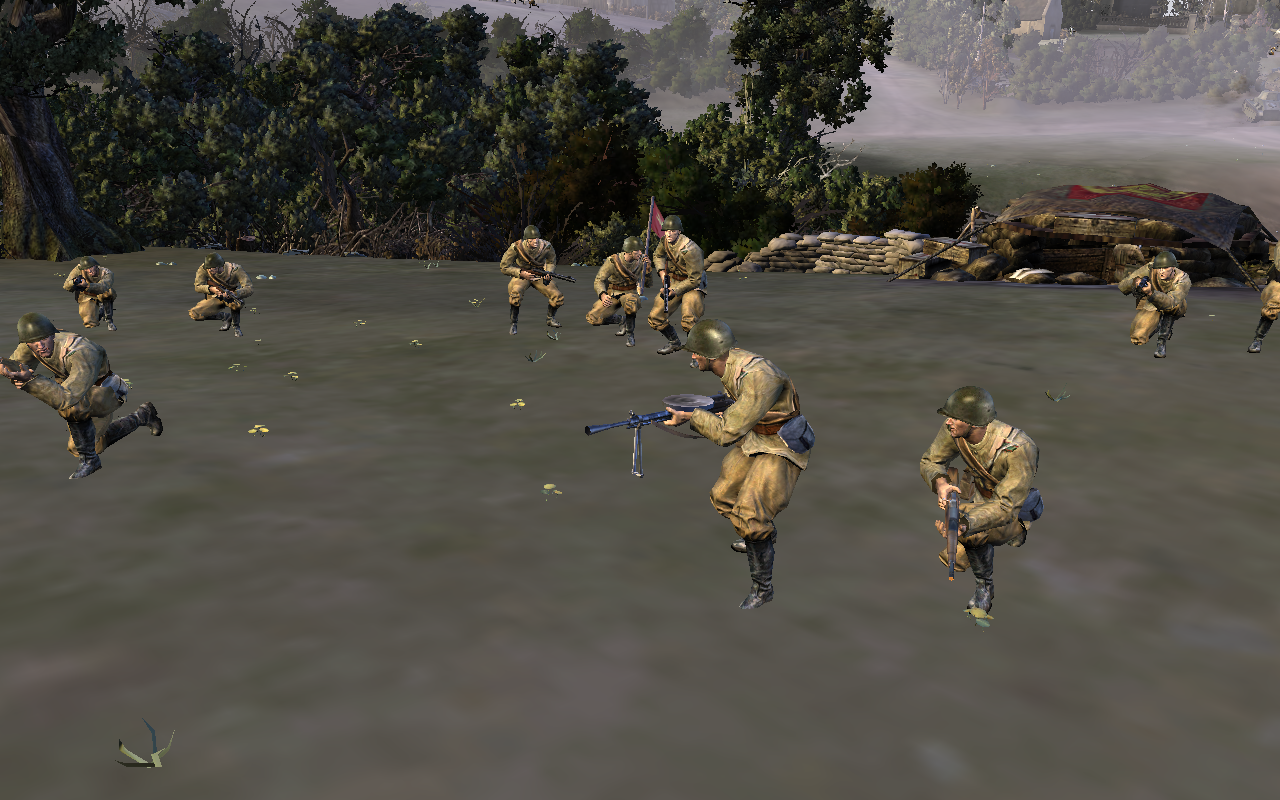 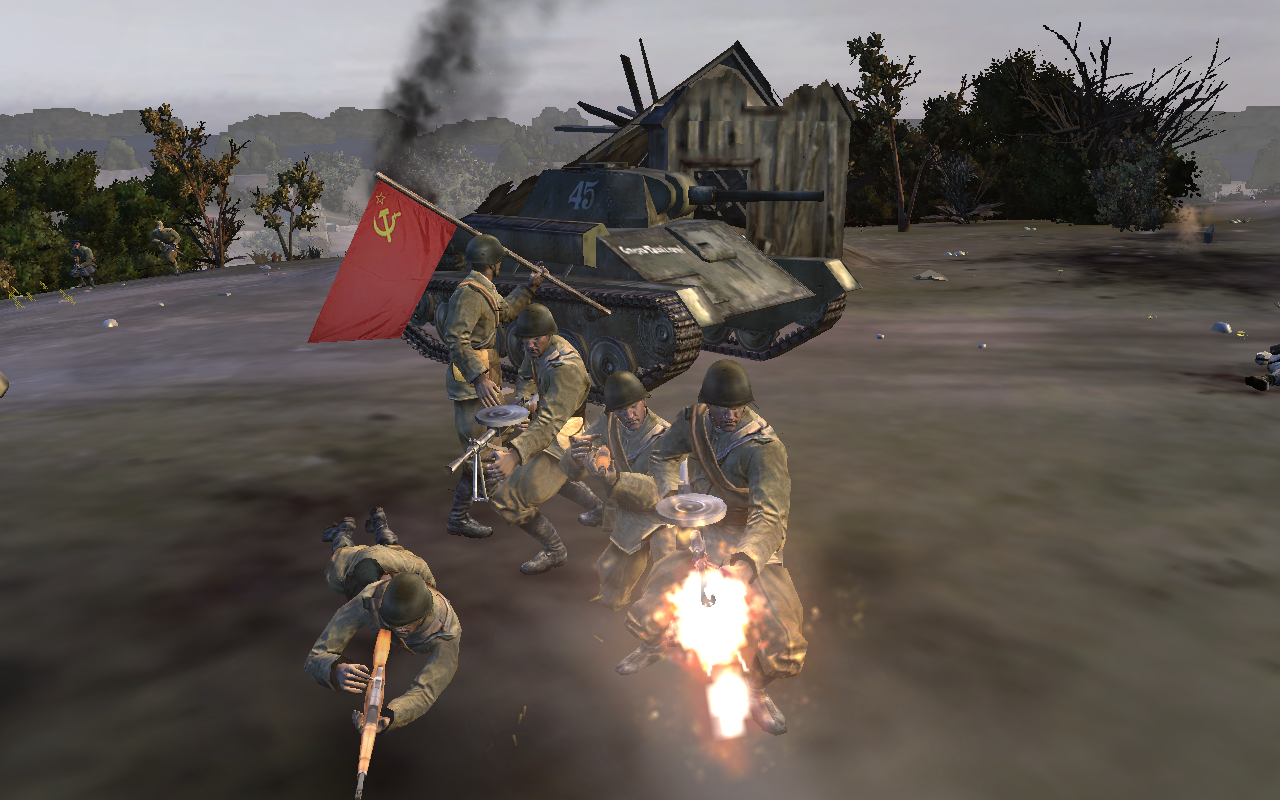 And some signatures for forums use...

Thanks to our new member Hawk Silk for the awesome 3d/2d work.


Thanks for downloading and enjoy,
Eastern Front Development Team

Note: Render is not an ingame image and does not directly reflect future mod inclusions.

how can i activate does new units???

the new mg isalso not included in the patch
can you please release a change lock???

i solve the problem

But you got one with your karma :|

It was fixed about an hour ago or so.

i hope 1.2 wont do any "unable to find company of heroes directory" lol

Armor wasn't really necessary for Tank Destroyers that were often hidden and kept in the rear of the of the front. The weight probably comes from the engine, gun, and the amount of ammunition it might carry.

The Jagdtiger had about 250mm of frontal armor. Why is it less powerful? I think the King Tiger had around 200.

tarrif gives me only 150mm for the KT, but the same as yours for the JT, and thats before sloping...

So the Jagdtiger should not be destroyable if hit frontally. And lets not forget that that its side and rear armor was 80mm (same as the frontal armor of a PzIV).

it would be wonderful if you make a solo camapain!!!

i cant figure out why the file is downloaded above. yet i cant play it. maybe its not the full version. I played at friends house and it was awesome! any advice?

Is it just me, or is the ISU-2 completely worthless? Even storming a bridge-front with 2 ISU-2's, I've been outmatched, very easily, by a panther and Panzer IV.. seriously, wth?

I just don't see any appeal for the Russians considering their upgrade costs, as well. I understand they're heavily reliant on infantry, but everything just seems so unbalanced now. For the most part, I just don't want to play against human players, too - I like the AI/skirmish battles, and it's hard to enjoy the Russians at all when I've got a bunch of inferior armor against a slew of Russian heavy tanks (srsly, ISU2's, KV4's) that get taken out so ridiculously fast - and seemingly from no matter what angle, too.

Nothing feels right. Everything is just a little *too* grossly expensive for Russians to work correctly on vanilla maps, and every time I try to play bigger skirmishes (3v3, 4v4) or even normal games on the EF maps, my game crashes. "cannot create dump file" every time.

this game is nothing to my machine and it shouldn't be having these problems.

I hope any of these concerns can be taken into consideration; aside from those, any ideas as to why it's crashing all the time? Thanks for any help-

So, this doesnt work if i have ToV ?

What kind of GPU's are u guys working with?? I just assumed not so great according to the screenshots but that isn't anything bad at all since you guys do such a great work.

Btw thanks for the danish translation in the launcher! We danes still exist and you know :D

i just installed the mod but i cant play it.I don't see its shortcut and in the main folder there is a eastern front luncher and it gives error when i click it,what shall i do help me..!

can someone tell sometihng about this please i need help i cant open the mod!!!!!!!!

ok,i installed the .net framework 3.5,and the luncher opens but now it says it cant find the coh location(unable to locate coh directory) and eastern front does not appear to be installed..help needed.!

If you have problems, go to the forums... link is right on the first page.

uhm wtf, how come this one is featured update on moddb? I mean it's not thaaaaaaaaat new

Mod would be perfect if there would be properly adjusted damage system. Like in blitzkrieg mod. If that would be done, I'd be glued to this mod.

Id be happy if they properly balanced their own units. Jagdtigers that are weaker than King Tigers, over expensive upgrades and units, units that aren't equal to the resources they cost. The the key problem of this mod and single fault is that they raped their own faction by making units weak and overpriced. Oh and the cheating AI's suck too, its like this mod team is out to make their own mod very hard to play, a good example would be the very faction they added with the mod. Don't **** the German faction up that your making or then again please do so the Axis has an equally ****** faction unless you plan on fixing the Soviets.

I gave you good karma before the Karma-Nazi's see that, but both mods are excellent, I prefer BK for the damage and features.

I would play EF if it had the BK damage system but it doesn't so I don't :P

But European Theater: Normandy 44' will add the Russian faction in its new big release (2.0). So then we'll be able to play a mod that has BK damage system with the Soviet faction added!!!

y is that i cant upgrade COH to eastern front??and its difficult to find a patch.

You don't "upgrade" vCoH to EF. vCoH is the original game and EF is a mod (not an expansion pack). That means that after you install EF, there should be a EF Launcher that you can use the start vCoH+EF mod.

The launcher is sometimes bugged, you can fix this by:
1)Making a Shortcut for your relicCOH.exe
2)Right-click on it and click Properties
3)Click on the Shortcut tab
4)Where it says "D:\Games\Company of Heroes\RelicCOH.exe" (or wherever you installed CoH), add this> -dev -nomovies -mod Eastern_Front

Now when CoH starts it will load EF not vCoH.