Gaming in a time when us long abused scapegoats have risen with pitchforks in hand. A socialist living in a time of political, racial, and gender McCarthyite witch-hunts that involve no shortage of ideological civil war. An anti-theist in a time of mass-enlightenment via the internet and superstition's initial stages of total structural collapse. In these alone I cannot mark myself a revolutionary but at the same time cannot help but find kinship with those of revolutionary flavor.

The following is random wisdom, enjoy.

Anger is the most direct emotion, as well as the most useless. Its only use is to indicate to others how weak you truly can be.

Choose your battles; pointing a shotgun at the world from space isn't particularly effective, nor is pushing against a mountain with your bare hands.

Live for humanity, for yourself, but not the universe. Though interesting and often pretty, it can't very well sustain conversation.

One judges all things but must do so accordingly, neither vindictively nor leniently.

Never begrudge the wasp. Know its malice, then confront it or simply avoid it all together.

To blame an ‘ism' for the ills of an ‘ist' is to blame God for the acts of his deluded worshipers. Though to only blame a single virion is often to discount the virus. All elements must be recognized.

Raw honesty leaves a bitter taste only irony can mask.

In every sentence another looses from their lips, creates with the pressing of buttons, or illustrates with the ink of a pen is information they think you worthy of. It is an incredibly useful way to judge a person if well understood.

Stating that someone's opinion is just their opinion is redundant and merely a polite way of saying, 'fuck your opinion.'

Contrarianism is only a component of understanding and information processing, to truly be a contrarian is to be no less a drone than one of God's sheep—to compulsively act and think without dimension.

Self-indoctrination is one of the most important things to master. Without it, who controls you?

Offense to the mere presence of dissent or opposition is at the core of modern society's failing. In a way it is the best indicator of man's awareness of his mortality, for he has no interest in his own end and knows no safer way to proceed than to dissuade his brethren from malice altogether.

I continue to struggle with which is the more informative gesture, a sneeze or a woman's smile.

"Living men are bound by time… Thus, their lives have an urgency. This gives them ambition—makes them choose those things that are most important and cling more tightly to that which they hold dear. Their lives have seasons and rites of passage and consequences. And ultimately, an end. But what of a life with no urgency? What then of ambition? What then of love?"

Among the major flaws in humanity is this time of confusion, the once surely predetermined fate of all under the dominion of the almighty & eternal father now is being expunged from the modern world's new foundation consisting of reason, science, and humanity. Man struggles now to understand, he is the only one who can change his fate and only on that day humanity will finally witness a new era of prosperity.

To sit comfortably with a single view is to neglect the complexity of reality. And it's boring.

"I said there was but one solitary thing about the past worth remembering and that was the fact that it is past -- can't be restored." ~Mark Twain

"How unfortunate and how narrowing a thing it is for a man to have wealth who makes a god of it instead of a servant." ~Mark Twain

A man unwilling to practice diplomacy is a man who’s stumbled into intellectual purgatory, somewhere between conversation and genocide.

'I'd sooner respect the man wronged who remembered than the man who was wronged and forgave.'
~Christopher Hitchens

"Puritanism: The haunting fear that someone, somewhere, may be happy."

"In this country, I've been told, "That's offensive" as if those two words constitute an argument or a comment. Not to me they don't."
~Christopher Hitchens

"I miss the way there used to be an international left and I'm very distressed & appalled at what's rushed in to fill the vacuum of the critique of liberal capitalism. What's come in to fill that gap is much more something like theocratic primitivism if not worse, fascism, that is now the alternative to the globalized capitalist structure. That's an even greater reproach, if you like, but one must look the facts in the face."
~Christopher Hitchens

"Never argue with stupid people, they will drag you down to their level and then beat you with experience."
~Mark Twain

Heterosexuality to me is a bit like being vegetarian. I can't help but find some otherwise wonderful food repugnant. In that sense, you have to somewhat pity homosexuals; they're the vegans.

"He that would make his own liberty secure, must guard even his enemy from oppression; for if he violates this duty, he establishes a precedent that will reach to himself."
~Thomas Paine

"Sometimes there isn't much difference between left and right but millions of people live or die between them." 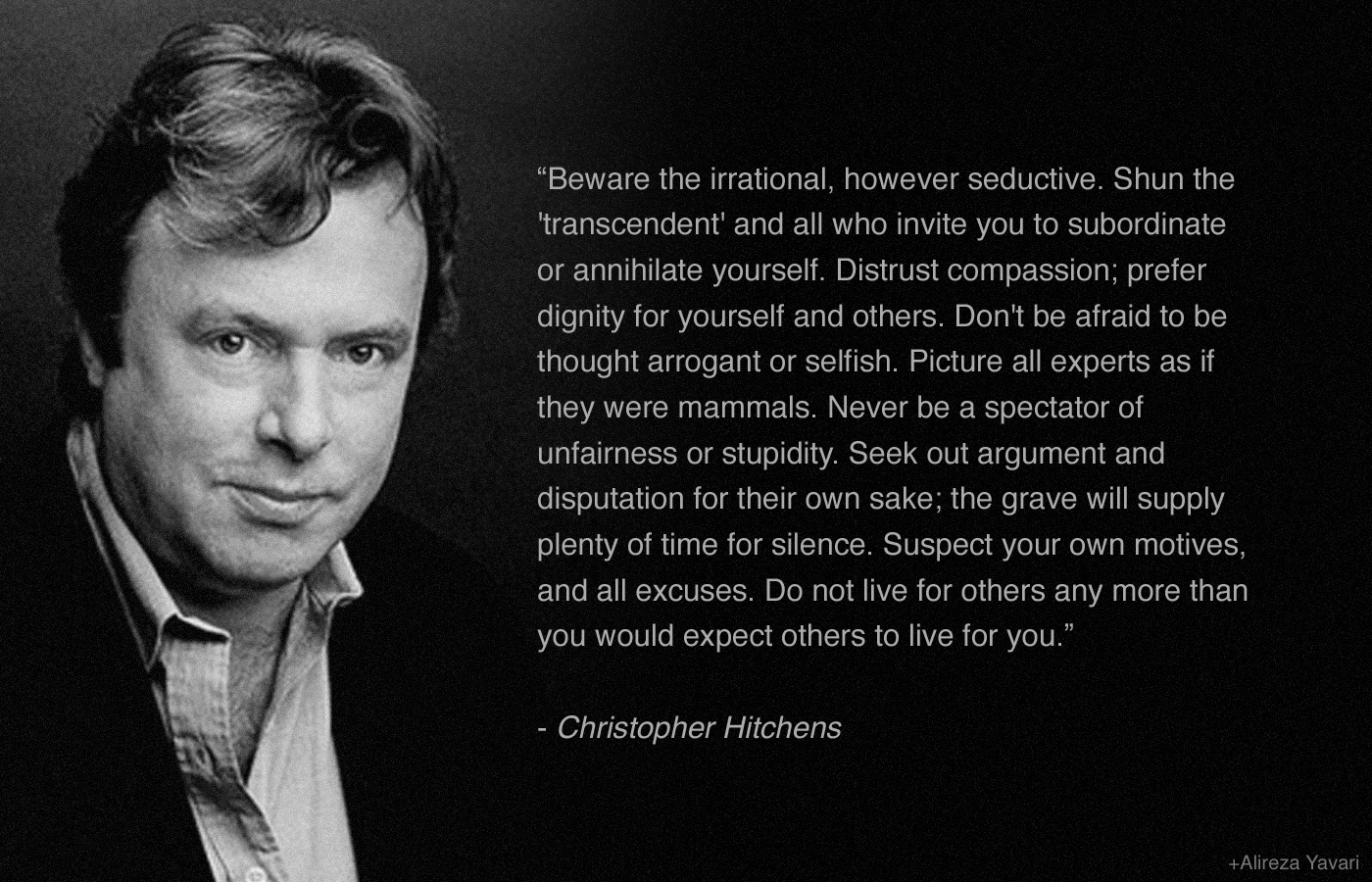 A group dedicated to the civilized debate and discussion of a wide range of topics, from the political to gaming and so on.

Somehow I'm no longer the Dear Leader of the atheist group.

Yeah it's also set to private now for some reason

Lol. Didn't you create it in the first place?

Doesn't get more awkward than that, huh. Guess I'm the Trotsky of this story. I'll have to keep an eye out for ice picks. *puts on helmet & moves to mexico*

Well, that implies that Trotsky was innocent. WtFFffFF??

Thought I might ask...
What do you think will happen to your country,now that Trump has won? 1984 or something?

He's a charismatic Bush, a puppet to be used by people like Steve Bannon. Whatever he thinks will make him popular, he'll say and do. Although given that he's picked a fight with stage actors and said theaters should be a "safe space", evidently he's as petty as ever.

What are you up to these days comrade?

>Spreading socialism
>Is a liberal

How much progress have you made?

None what so ever, if anything he's turned me and several others into hardline anarcho-capitalists!

Whoa man you're violating the NAP by posting on this profile.

A recreational scud missile has been launched to your IP address