A list outlining some major changes to the mods gameplay. 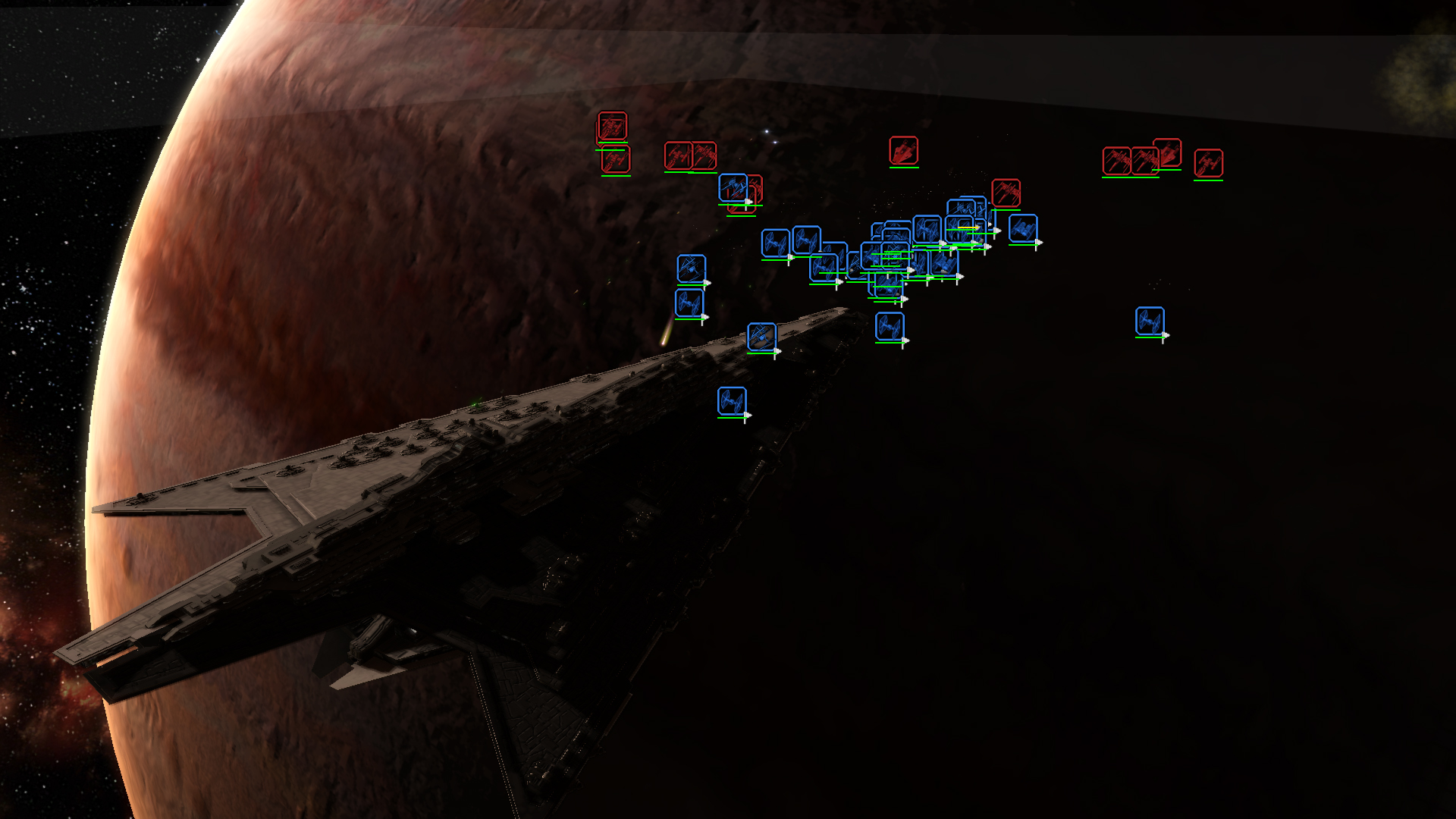 Here seen as it is about to be hit by the planetary ion cannon. I cri erytim.
Will probably do something about it completely draining even the largest of ships, since losing your 50000 starships firepower to something that cheap is...well, cheap.

Not entirely ready to show off the ship, but I will in due time. Haven't found a worthy enough enemy fleet yet. Safe to say it fires an impressive barrage. 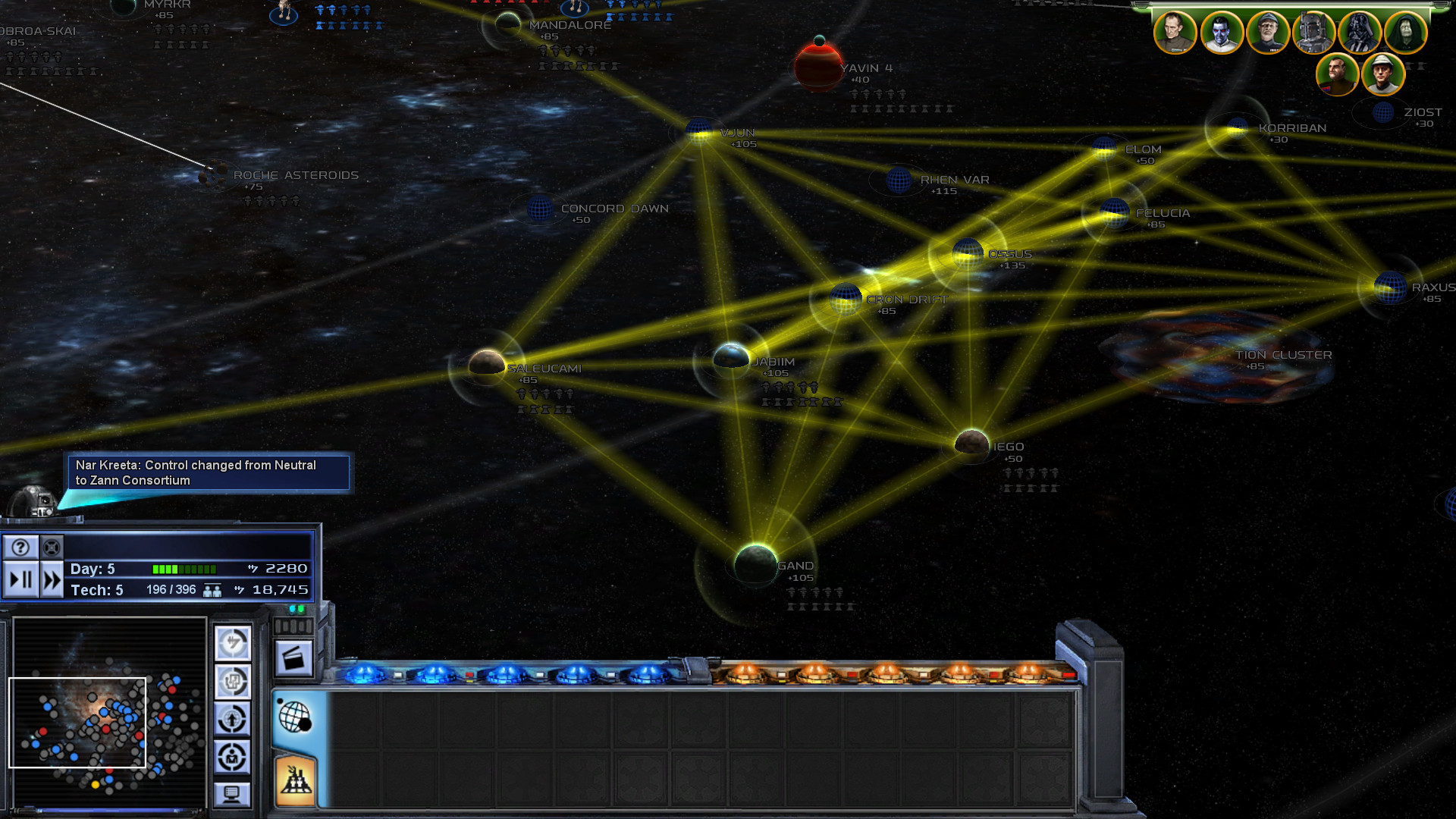 1. Starbases have seen a substantial upgrade. Longer range, heavier weapons. All starbases now boast four times their previous shield points. They are now capable of fighting off much stronger attacks. This ties into the next change.

2. All ships have their shield and hull points doubled. This includes all hardpoints for starbases (starbases have four times shields instead of two times as mentioned before), starships, and hero units. I wanted to make ships last a little longer. After some testing I think it gives a better feeling to not have ships take heavy damage to fast. Your ships can now be under attack without you having to worry straight away. Shields now feel like they give you some actual protection, and hardpoint armor feels like weapons have to chew through the hull of a starship instead of papermache.

3. All weapons, with the notable exception of missile and torpedo weaponary, have their damage slashed in half. In addition to this, laser and turbolaser weaponary has been slowed down considerably. The damage reduction was done after I concluded that my starships do not provide me with a sufficient lightshow. But I cannot change the starships to fire more without also reducing their inflicted damage. Hence the damage reduction. I was content with the missiles and torpedoes firerate, so I left their firerate and damage as it was. I'm currently going through all starships hardpoints to roughly double the ion, laser, and turbolaser firerate.

5. The ISD, Allegiance, and Bellator have had an addition increase in hardpoint health, since they didn't feel like the fortresses of metal that I wanted them to symbolize. Cost has been slightly increased to compensate.

Because people still seem to have some difficulties getting the mod to work, I'll keep this installation section here below for visibility.

Quite a few people have reported crashes. To fix said crashes use the GoG version of EAW, which has been altered by GoG to work on every system, alongside the 4 GB patch.

This SHOULD fix any crashes people have.

Special thanks to user 0il for pointing this out. You should check his other videos since he has smooth battles with 100 pop cap. Very cool to look at imo.

I recently bought GoGs Empire at war Gold pack. ( Gog.com ) It works on all versions of windows, including 10, which is what I now run on my new machine. GoG ensures that every game it has on its platform runs on almost any system. With this you no longer need to install any 64 bit patch, or crack, to get it to work. Just install and play. Then, after applying this crash fix to both the EAW executable as well as the FoC executable ( Youtube.com ) I can run the game at 50 pop cap without crashes, this even holds up in 2v2 skirmish vs hard AIs. Here is a video of me doing that: Youtube.com

I'm not sure if it really reduced GC lag. I tried the large GC map and didn't notice that much of a change. I think most of the lag is the AI moving a thousand fleets at once.

This game bottle-necks hardware severely, I've got a I7 6700K and a GTX 970 and yet the game manages to lag in GC. Have 150 command points worth of ships in battle? No problem there bud. Galactic conquest with 100 planets? You get 30 fps, and no more. Atleast the 4 GB allocation patch makes the battles run smoothly, that's all I can ask for I suppose.

The Galaxies at War mod had such an awful drain on hardware for GC too. The developer added a second galaxy alongside with the vanilla galaxy and it was awful to have 10 factions moving hundreds of fleets every second.

Didn't notice this before with all the new screen shots. Can't wait to see that Annihilator. I also agree with a lot of the changes you are making since I've made most of them myself to my personal version of your mod. Also did the fire rate increase and it sure is nice to have all those ISD turrets giving you a light show. As for the Ion Cannon maybe make it cheaper and less effective but still more powerful than anything ship mounted.

As for the GOG version it was on a 75% off sale a week ago when I bought it for those who are debating whether or not to get it you might want to look into it if it's still on sale.

Lastly could you upload your Secutor model to the add-on section. It was always a good looking model though I full heartedly supported the Allegiance change. Now it's more interesting to me since it actually made it into the new canon which is a status the good old Allegiance hasn't achieved yet.

It's now in the add-on section.

Very nice changes. I too have felt that ships died really fast, so this is a welcome change indeed. Also nice with faster fire rates and stronger star bases.
Very good. Yes. Yes.

As for the god awful corruption particle, i concur wholeheartedly. Get ye gone spawn of darkness! Even better remove the filthy mechanism completely. I mean come on, i am tyber zaaaaaaannn and i come to corrupt youuuuuuuuuuu.
Corruption and crime works really well in a democracy with rights left and right, with the imperials looking over your shoulder you are more afraid of them than any thug out there.

Good to see the tie fighters back as well!

Are there gonna be any additional changes to the alliamce? I know they're not supposed to be as power ful as the empire, but if anything they could at least maybe see more mon calamari variants. Or, what about the dauntless and liberty cruisers? Or the assualt frigate mk1? Im only throwing out suggestuons just because the alliance doesnt feel diverse enough at times. There are quite a solid number of different units besides the cr90, the dp20, the liberty, the assault frigate 2, the quasar,the maurader, and that other cr gunship type. Don't get me wrong, the units you have are without a doubt some of the best work ive ever seen in my life, injust think the alliance could use a tad more meat. Especially when they canonically (going by EU standards, not that other nonsense)had some decently meaty ships.

I'm currently working on another commision, after that I plan to integrate Docis excellent MC 80 and Home One models into the mod. He's given me permission and I have the files already, what I don't have is more than 24 hours in a day sadly.

I'm very defensive when it comes to adding new ships since I want each ship to fill a particular role. You've been around for so long that you've probably heard that a hundred times already. I don't currently have any plans to add units to the Alliance, though if any will be added, it'll definitely be to the Rebellion. I agree that adding more variation is flavorful for the faction.

Just now realizing how bad my phone spelling is.

If there is any change I would give a minor organ to see it would be X-wing torpedos (They would be super slow to reload compared to Y's and B's so they fire them off then break off to engage ties) and maybe replace the Victory One with the Vic Two (I know the Two is just a weak SD but in my experience the Vic one literally is a Hard counter for everything the Alliance put into space both fighter and capital ship. Maybe reduce the quantity of Squadrons the empire has on there Captial ships (Past the Vic every Imperial ship both out guns and out squads the Alliance completely) or give the Alliance some more ships with squads.

Please do not remove Victory One, as it is hallmark of this mod. It is available from the beginning and its valleys of missiles and its gfx effects are masterpiece!

It's also fine it damn hard ship. Equal Rebels is something counter to first trilogy logic.

Ok, that's fair. After playing the newest version then adding Home One types as buildable once you hit Tech 5? Because as it stands the Rebels are trounced in space both in GC and skirmish.

Ok, to add to this, how do you make models for this game? I don't make mods for games, or models for other people. You're doing a ton by yourself and I just would like to make some ships for the consortium and the alliance. Maybe even start a Hutt faction. I'm not saying you'll have me full time, but if I can help I'll try

is the Executor on the mod? Missed it in the past releases

About the changes, I love them.

Executor was replaced by Bellator which is far deadlier and better looking than the vanilla Executor. This Annihilator is a new SSD that isn't out yet but it too is not an Executor.

Oh, I'm well aware. I too, think that the Bellator is better looking, it's just that Vader in the Executor is a classic. I understand not being in the mod, but I'll still miss it =)

I dont remember if you mentioned it, but did you turn the Zann starbases to face the correct way in all space maps? I remember some of the space maps in vanilla the station has most of its guns on one side and it faces away from the enemy spawn, drastically reducing defensive firepower.

Also did you nerf the defilers so they don't blow up a random building ever 10s? That kept me from playing anyone but Zann in vanilla GC.

Doubling HP/Shields and cutting damage should make things much more interesting and battles take longer, which is a good thing. Sometimes vanilla and other mods space battles seem way too short.

I'm actually half considering replacing the station entirely, that would also fix the problem. I already know what I'd replace it with, but it's not textured. One of the many ancient relics from the my old ORAW era that I think it to good to drop, yet have never finished. Media.moddb.com
I've deleted and put back in the defilers sabotage many times. I think it's currently disabled.

Oh yes i remember that **** RIP azrwaith, still holds up 3 years later which says something about his talent.

i cant afford the gog version and i have the steam version ;_;