Announcing a new way to play BrambleLash! Check out the concepts and development decisions behind our newest game mode.

In every playtest we've conducted so far, the thing that almost every player has requested is “more”. As nice as it is for us to think that people can't get enough of the game, we're pretty sure what they're ACTUALLY asking for is more than just the simple endless mode that we initially envisioned. So to remedy this, we've been working on a new game mode that will be presented as the primary way to play BrambleLash. For the moment, we've quite originally dubbed it as: ADVENTURE MODE!

Structurally, adventure mode will be presented as a series of discrete single screen levels that are varied in a number of ways in order to further explore the central co-operative tether mechanic. These variations include different: 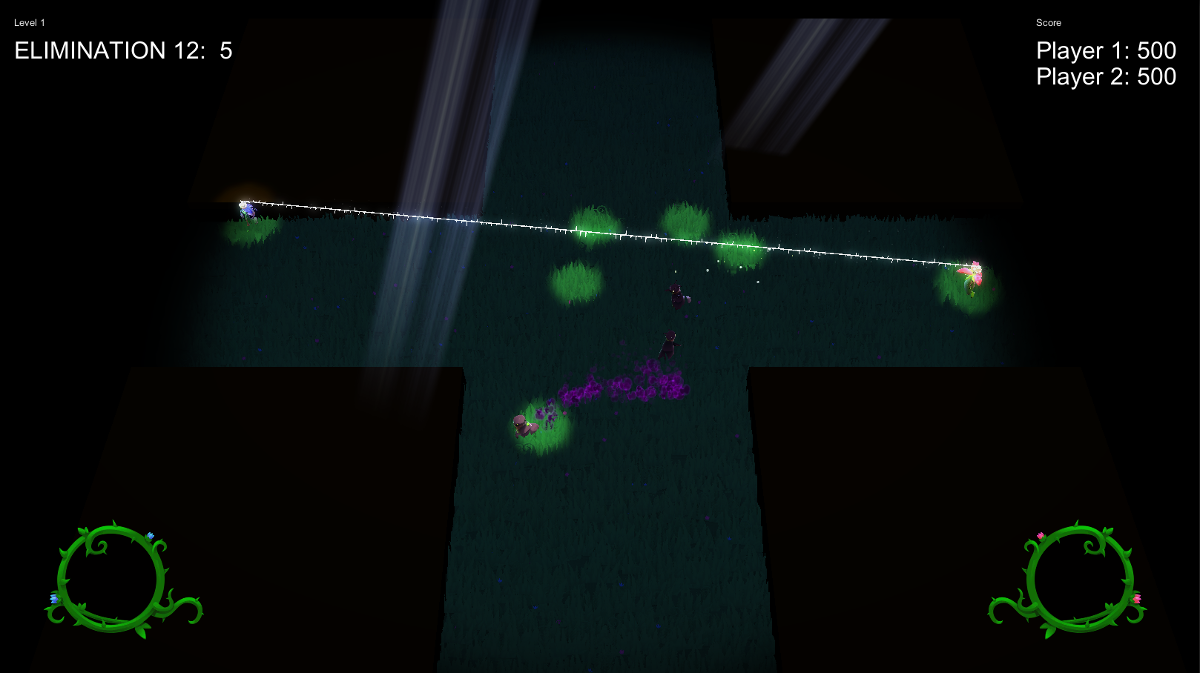 After a certain number of levels, players will be faced against one of a small pool of boss enemies that have unique attack patterns and behaviours when damaged. Think of the 3D Mario game bosses and you'd be on the right track. Each level will generally be more difficult than the last and pseudo-randomly generated in order to allow for players to play for as long as their skills will allow them to.

One of our concerns when introducing multiple levels was ensuring that gameplay be continuous. Load screens and level select menus don't really seem to play nicely with an arcade style party game. We've addressed this by allowing player characters to seamlessly move to the next level area though a transition zone that opens up when the current level is won. Visually, this manifests as a traversable pathway opening up into the darkness that surrounds the level, and closing once the next level area has been reached by all players. Of course, having this short transition area conveniently allows us to asynchronously unload and load necessary assets, and sneakily shift player locations to ensure that the game is played out within a discrete amount of world space. The short break from being attacked by enemies also allows players to gather their breath and wits before venturing on!

A player saves their partner by pulling them over a short obstacle. What a pal!

The level variant that has caused us to have to make the most changes and design considerations has by far been the addition of static obstacles. Introducing objects that both players and enemies can physically collide with has added a new dimension that we must consider when spawning things into the level and crafting gameplay challenges. Gameplay-wise, obstacles are separated into 1 of 3 categories. Short obstacles block regular player and enemy movement, but are low enough that players can pull their partner over the top of them with the tether. Medium obstacles block player and character movement of all kinds, but are low enough to allow for the tether to pass over the top unhindered. Tall obstacles block movement of all kinds, INCLUDING that of the tether. This causes the tether to become caught and bend around the obstacle, potentially causing all manner of strange configurations.

A very rough prototype of the tether bending in action.

Even in the early state that it's in, adventure mode is already making BrambleLash feel like more of a complete package. Next up is crafting all of the fun level variant combinations we can. Can't wait to get started on some good ol' fashioned level design!