More about the new and the next functionalities of the Moshanyana plus some screens.

Some hot and long news today ! (Tonight for me actually ^^) :

Added : Focus zone : I ask myself about the selection/focus system, without mouse, it's a bit complicated. But finally, the idea womes from some screenshots i remember on dreamfall : the longuest journey, this point and click has this line system I try to reproduce here : 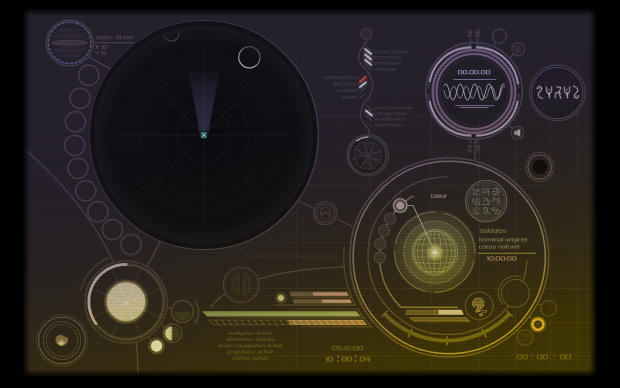 The focus zone reduces itself to a single line by pressing the focus button, the time to focus is depending on the 'level of your ship (already thinking about that..rpg skills or not, maybe too much out of context, I must do something really "in" the simulation) Whatever, the fact is that because the game is centered on the Moshanyana Controls (not like a rts or a shooter), something like focusing on a point is as difficult (or complicated, but in a good meaning) as controlling all the other systems. It takes on or 4 seconds, not 1 miliseconds. just wait to see the Weapon System XD, the shooters lovers will be suprised !

I've also try to optimize O.T sprite, it is really a FPS hole, like the moving map ! In fact, I just have to move the .x or .y coordinates of the map to have a big decrease of the FPS (in the video, you can see that a little bit, and I can't permit this game to have that sort of glitch if I sell it). There is a clipping system i've coded, which is really good, but not perfect..

What else ? Two indicators at the bottom right hand corner for the Encylcopedia Webdianis, The Analyzer and the Programs list.(The three screens could be activated in the same time)
I start to make my own fonts for the Moshanyana, particulary the 'alien' (not really the good word XD) language on the transmitter screen (I let you found it).
There is also a new screen on the middle-bottom, for pression, i'm not sure about the design...will see. I've moved the cooling bars, better next to the health and fluid flux field.
Mmh, the memory has also a rotate animation. (not FPS hole contrary to most of others rotating animation because it's tiny, in the same idea you can see on the analyzer screen that I've reduce the lines of the rotating circle, same design, better performance).

And...the keyboard on the left side of the naviguator screen may disappear cause its using to muche place and i could bring it in the program screen -just when you need it - in fact. Finally there is also the transmitter indicator on the middle, i've collapse the two previous (only one at the time was able to be switch on (for the ships or for the O.T., not very interessant)) and add a circle that switch automatically on or off to show if its a distant or a physical transmission. 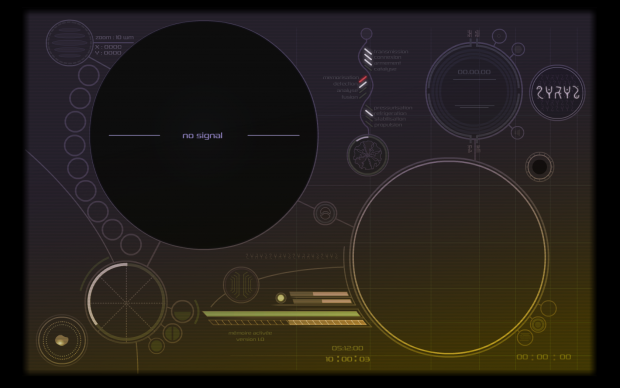 Thanks for your reading, your commentary, your tracking, I really appreciate that, from all of my heart :)

Looking good. Very interested in how this will evolve. Love the art direction! Keep it up!