Hello everyone! As long as I can't show new models too often, I've decided to start some kind of development diaries, where you'd be able to see development progress on the mod.

Posted by AndreusAsable on May 2nd, 2015

Dialogs. First of all it concerns "greetings" of different groups of units. Having no neutral units (hostile to everyone), with exception of skeletons, bandits and wandering champions, the reaction of different warbands will depend on faction the player belongs to, for example:Chaos player meeting raiders: 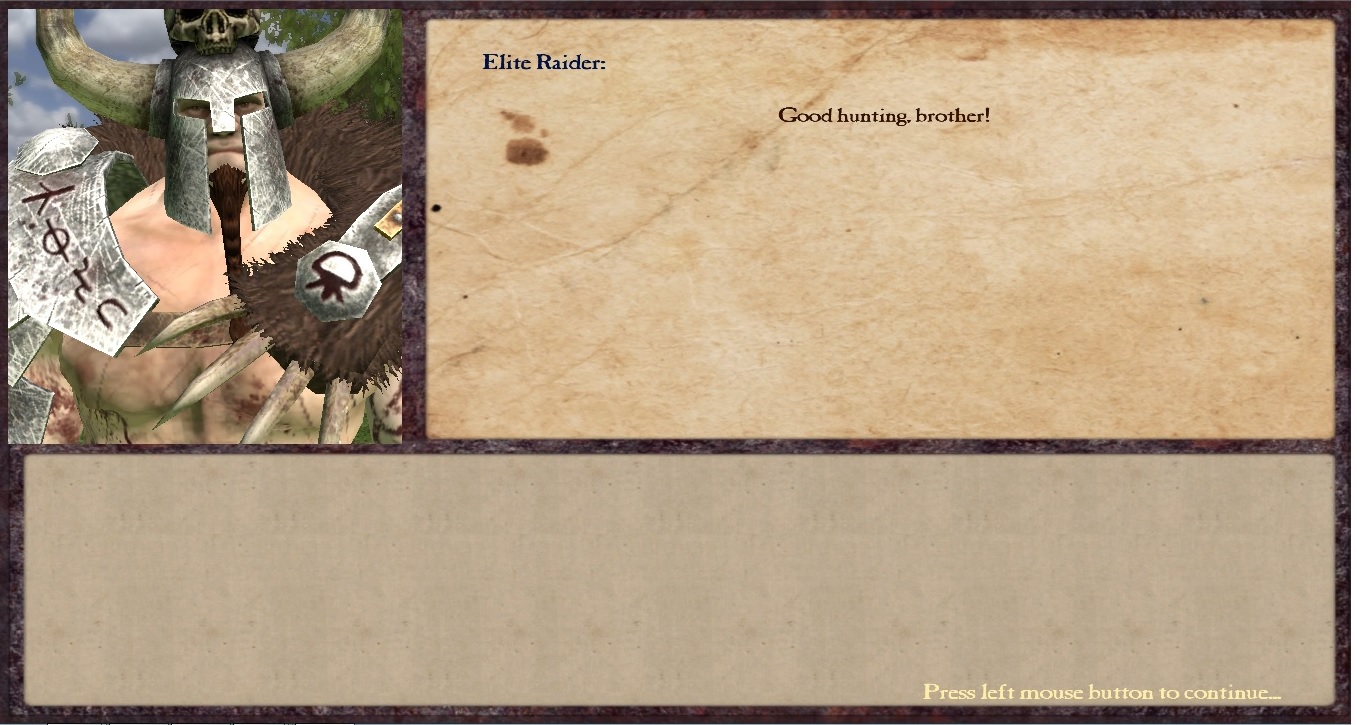 Empire player being threatened by raiders: 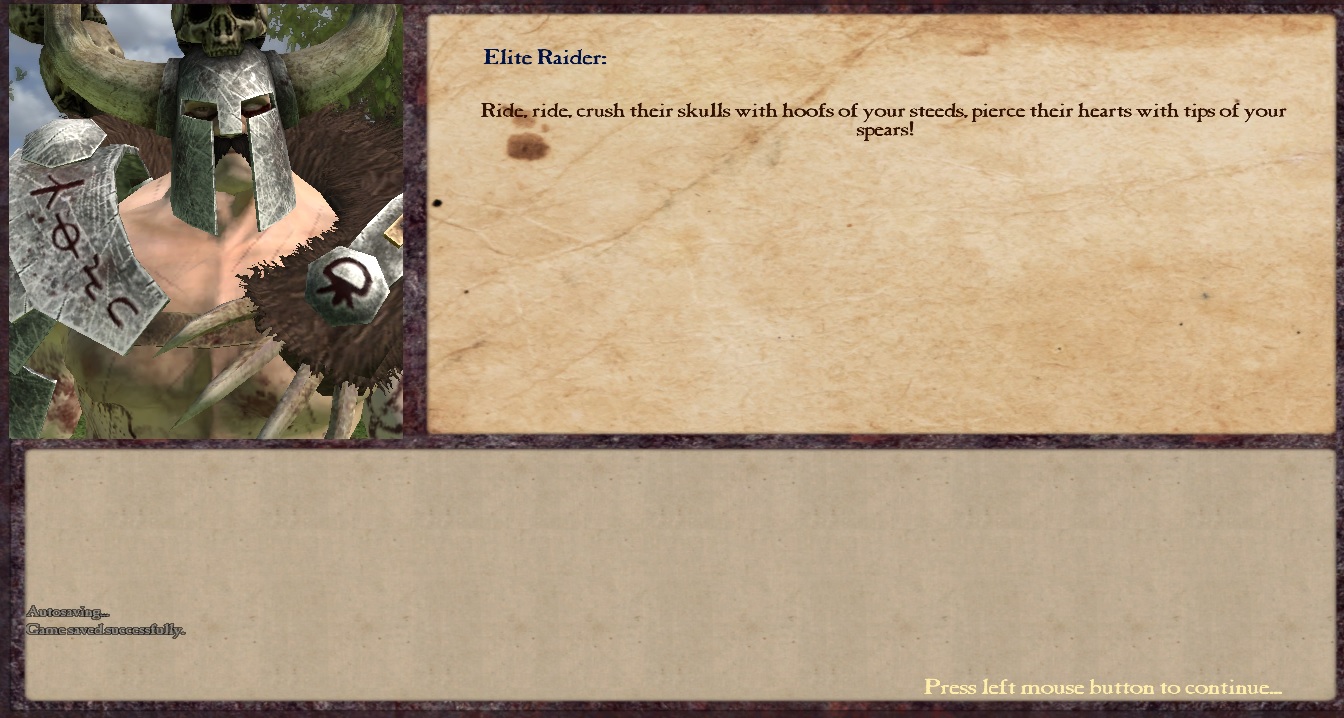 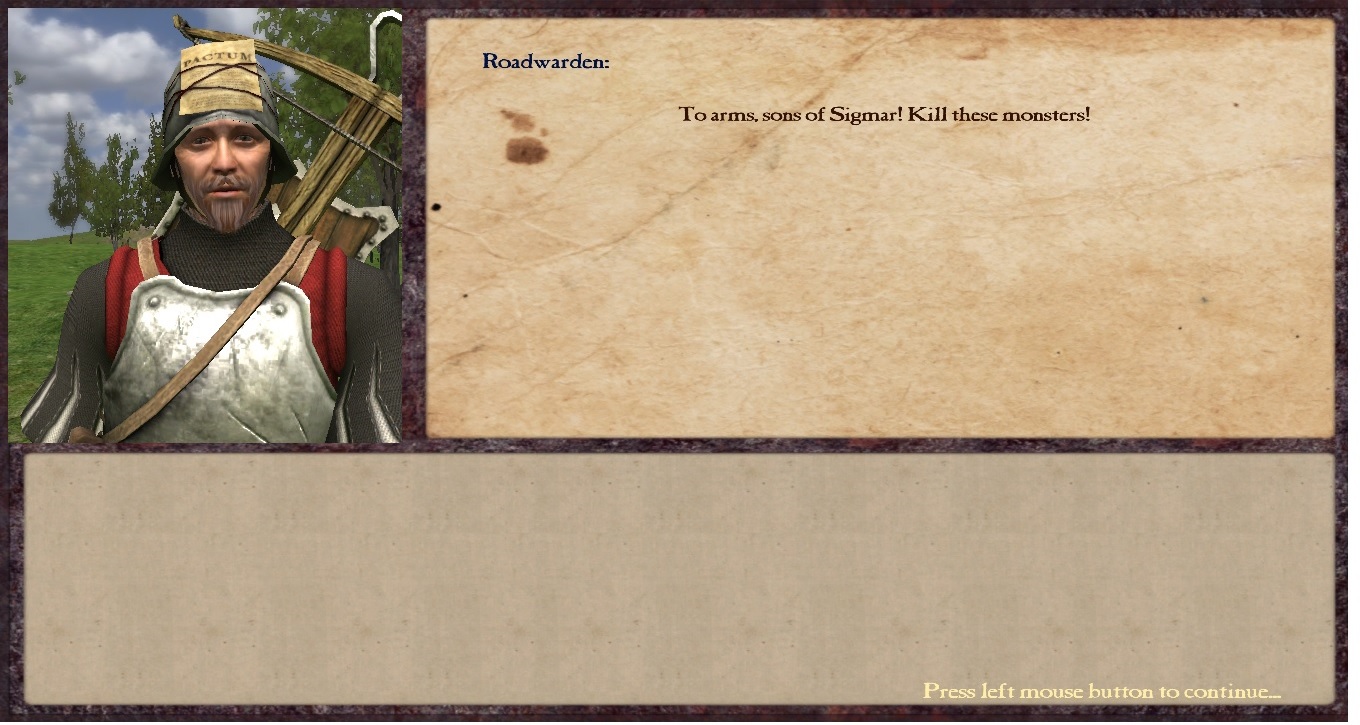 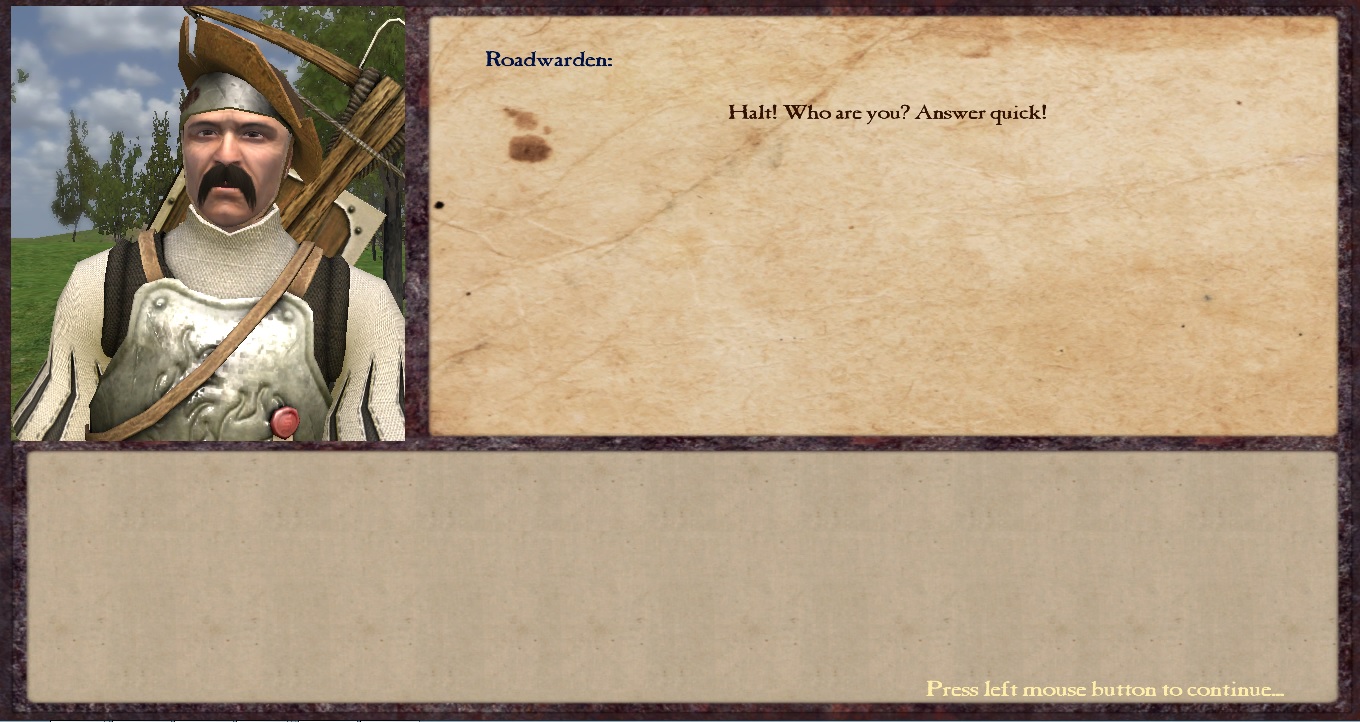 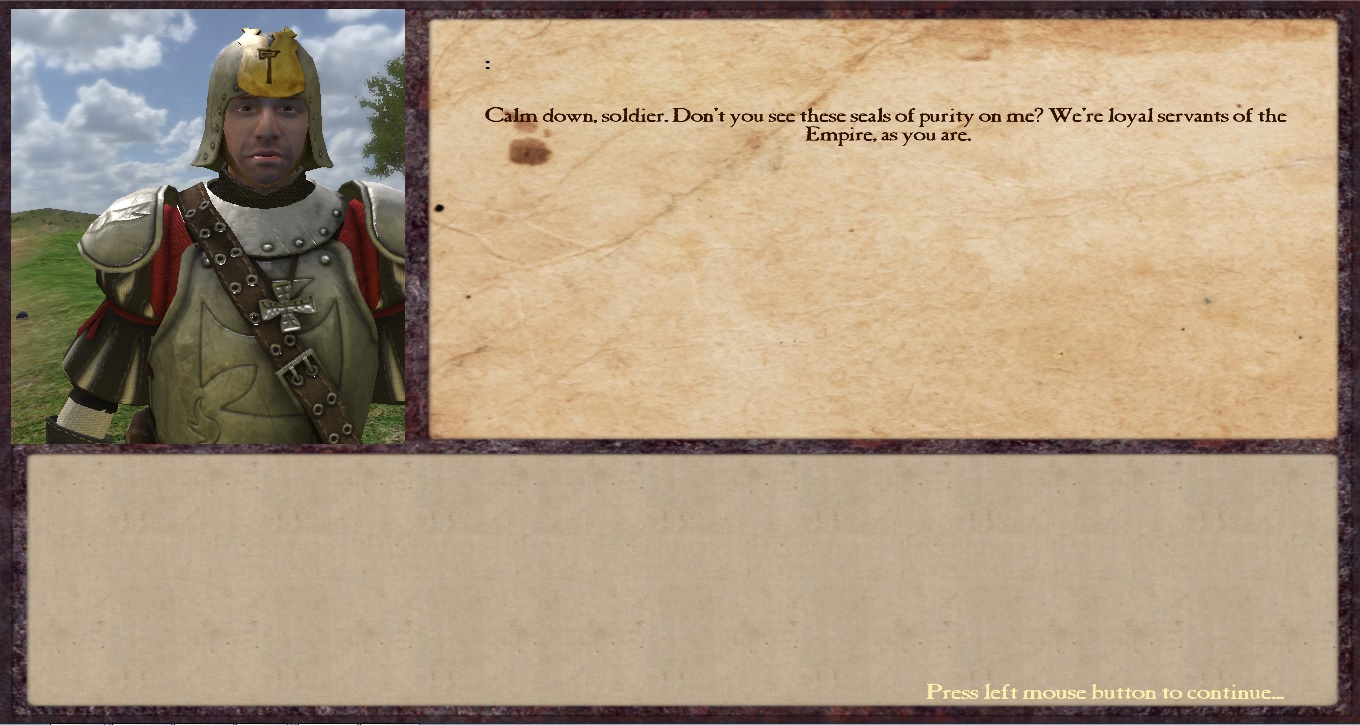 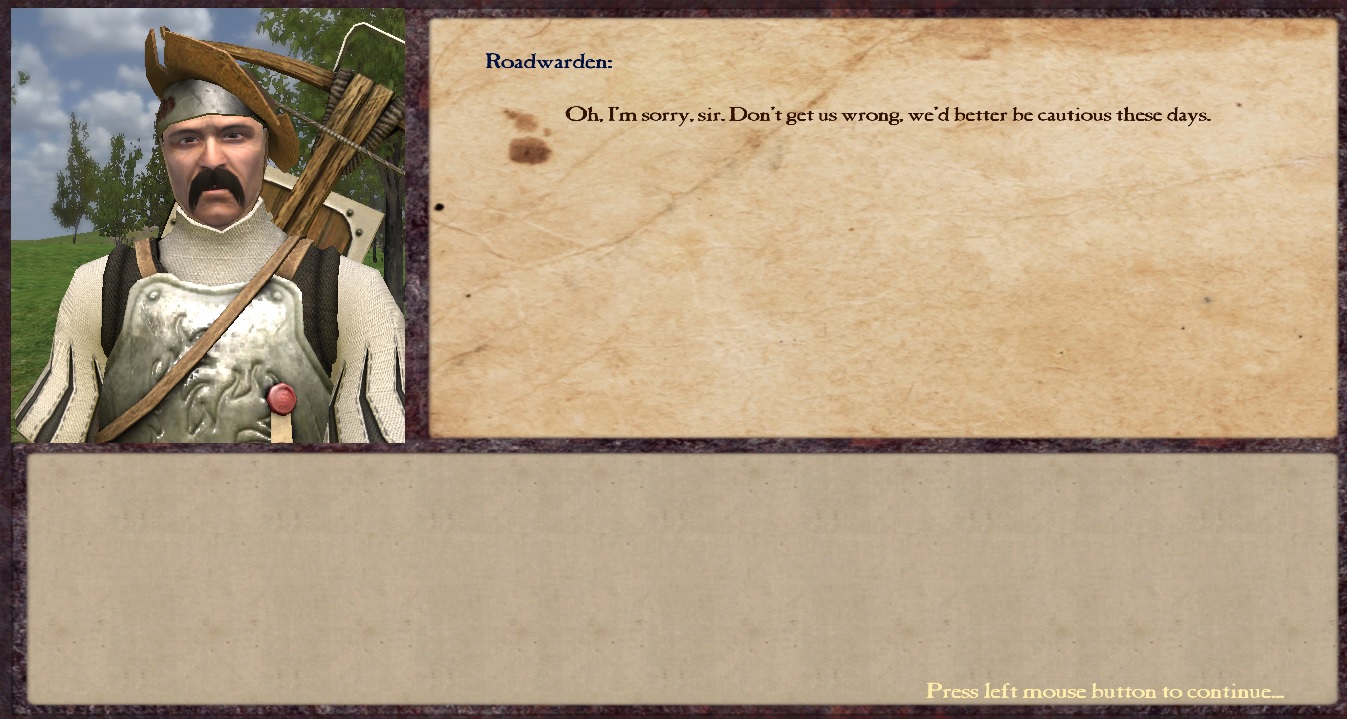 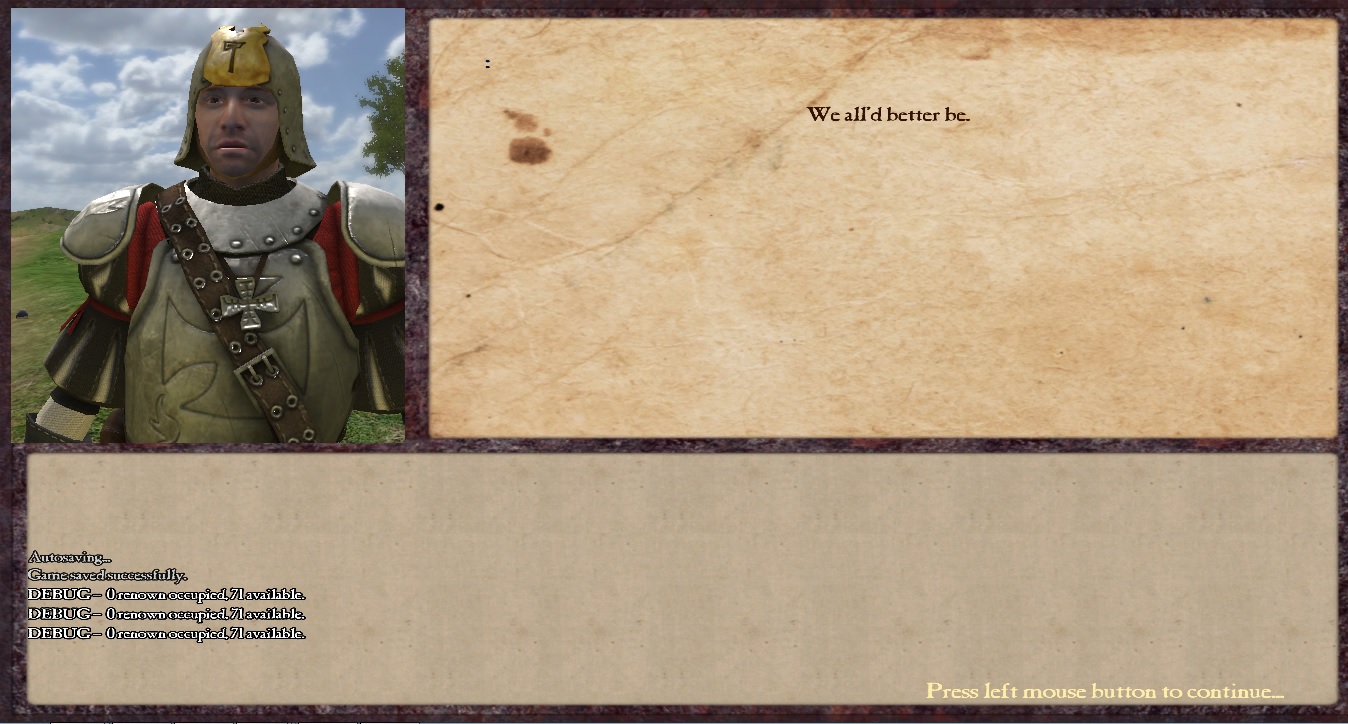 Rank defines in what way wandering groups greet player, but that's not all. The higher player's rank the more features available in general, including unique options in dialogs. For example, Chaos player with the highrest rank will be able to join wandering zealots to his party without any limitations, which will allow him to use them as cannon fodder during sieges etc. 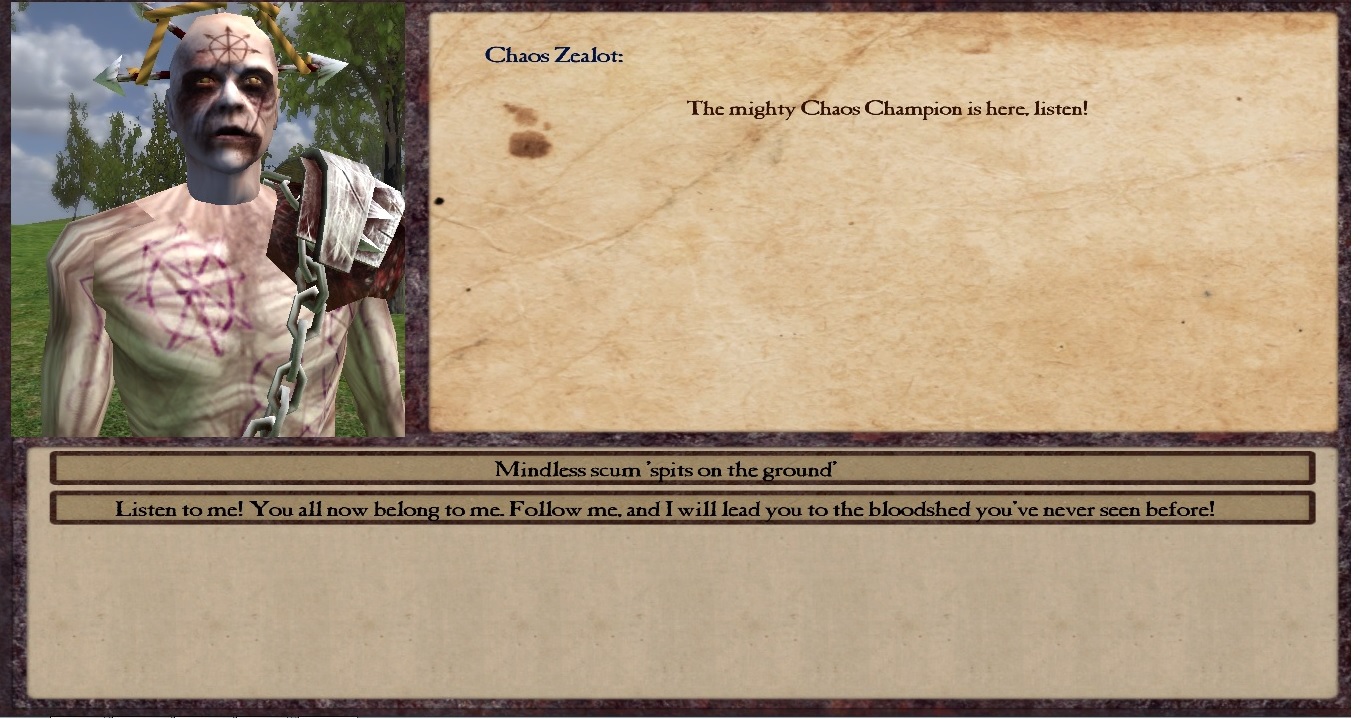 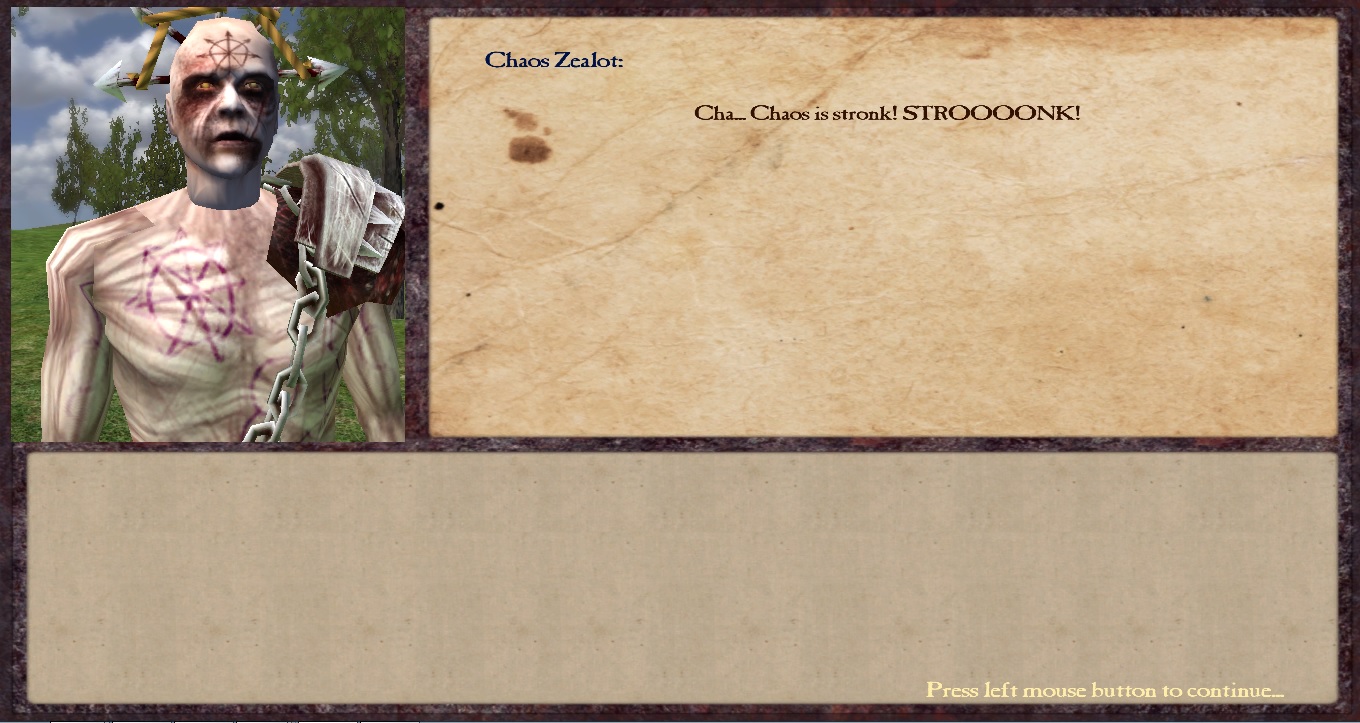 Another partially done feature - additional rank "Coward" for chaos player. It's main purpose is to make player's life much harder, for cowards are not to be respected by anybody. Lords will deny speaking to coward, and wandering groups will laught at him. There're some obvious ways to become a coward, like refuse to duel with anybody or flee from a battlefield. 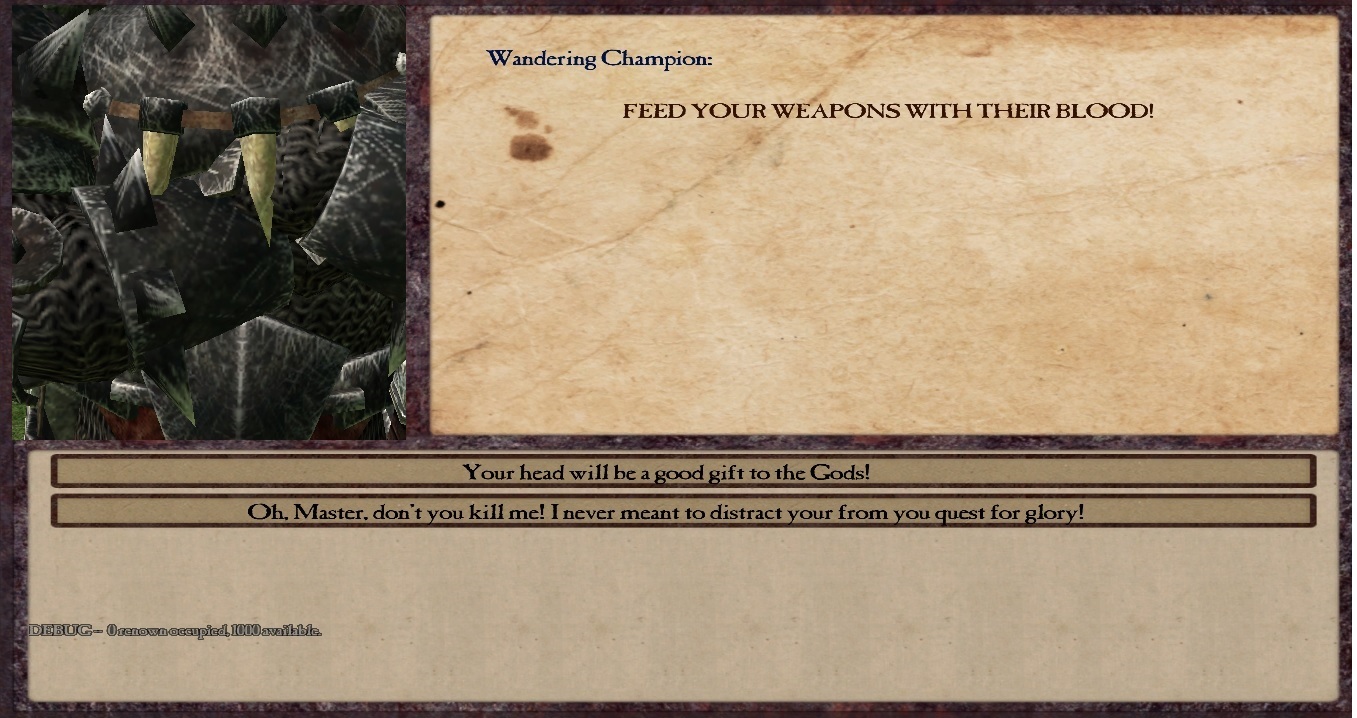 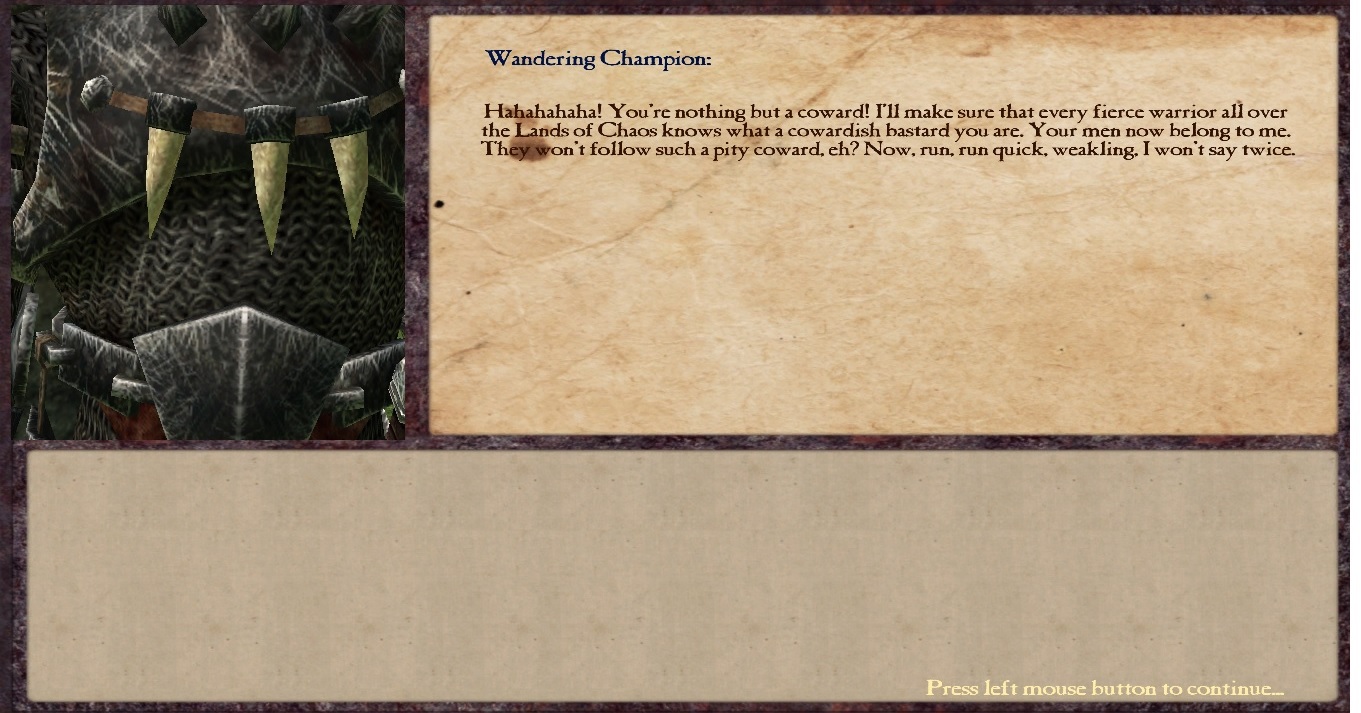 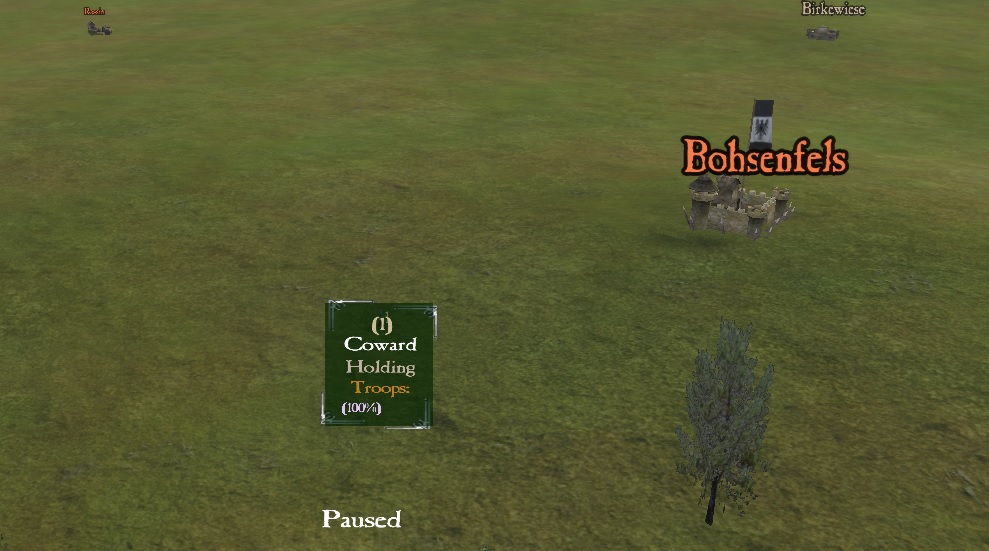 Duels. Simple as it is - you can challenge every enemy lord for a duel. Providing you won and your opponent's party morale waslow enough, you can decide what to do with his army, e.g. let them go or fight them (in this case they get a severe morale debuff). For every duel won player gets quarter of his opponent renown.

If opponent's party morale is high you'll have fight them anyway, but the morale debuff won't be absent. 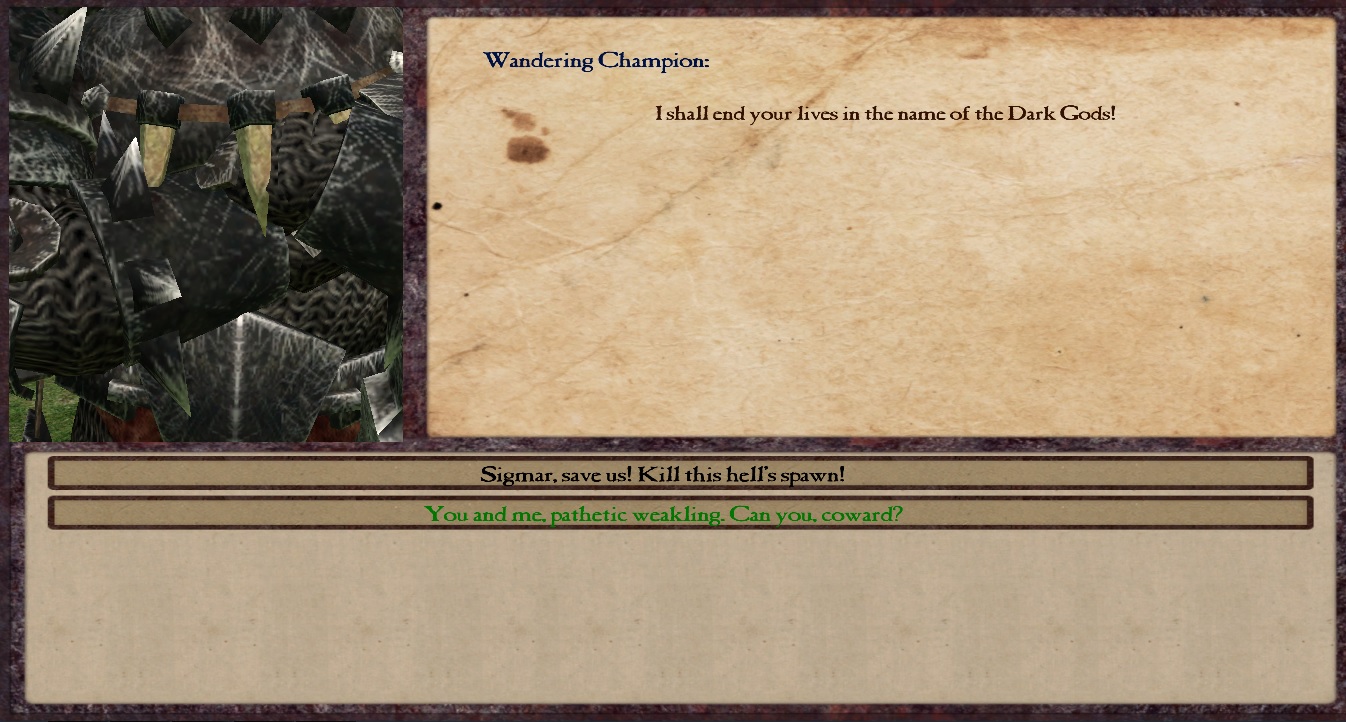 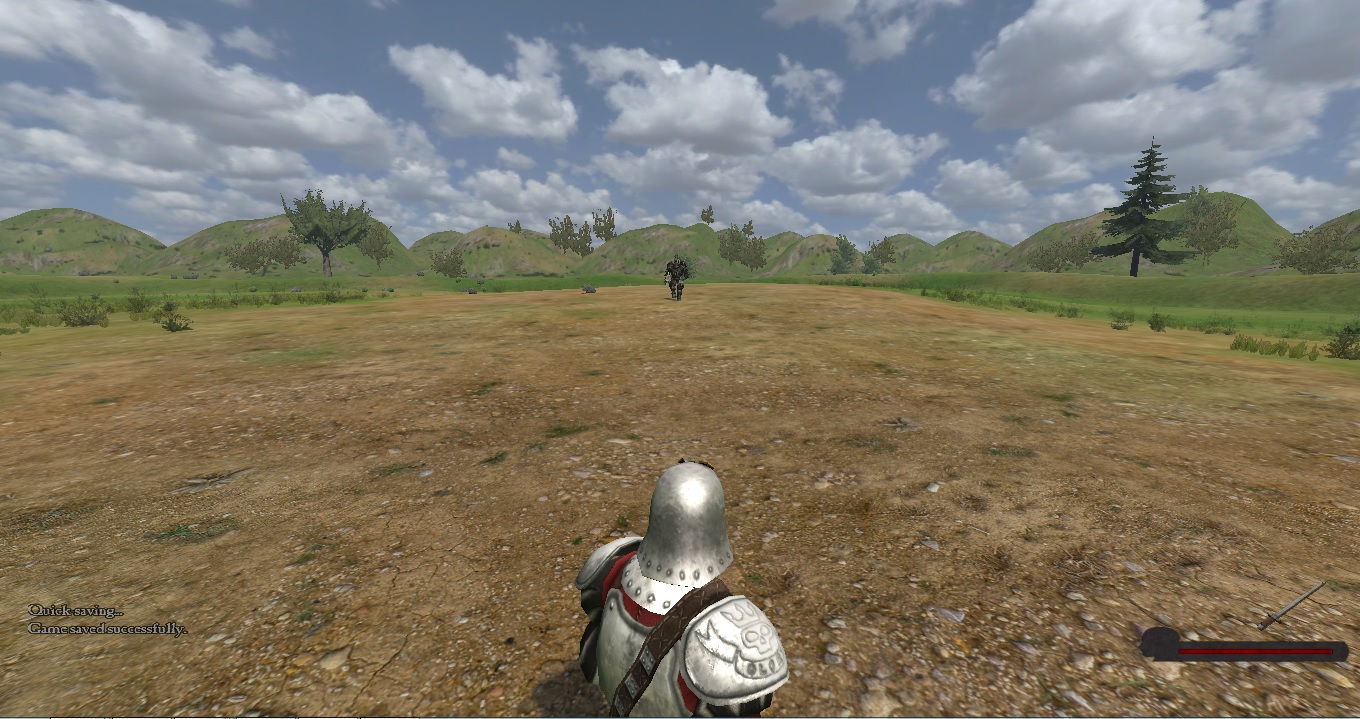 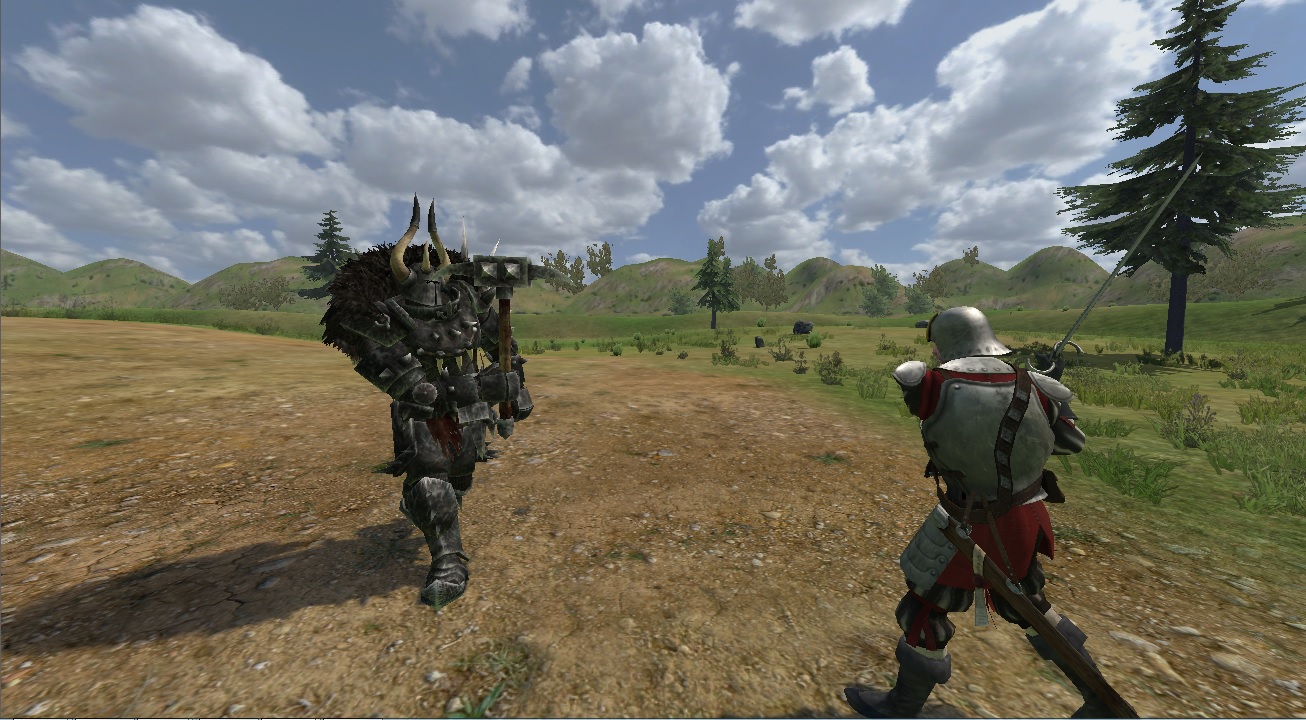 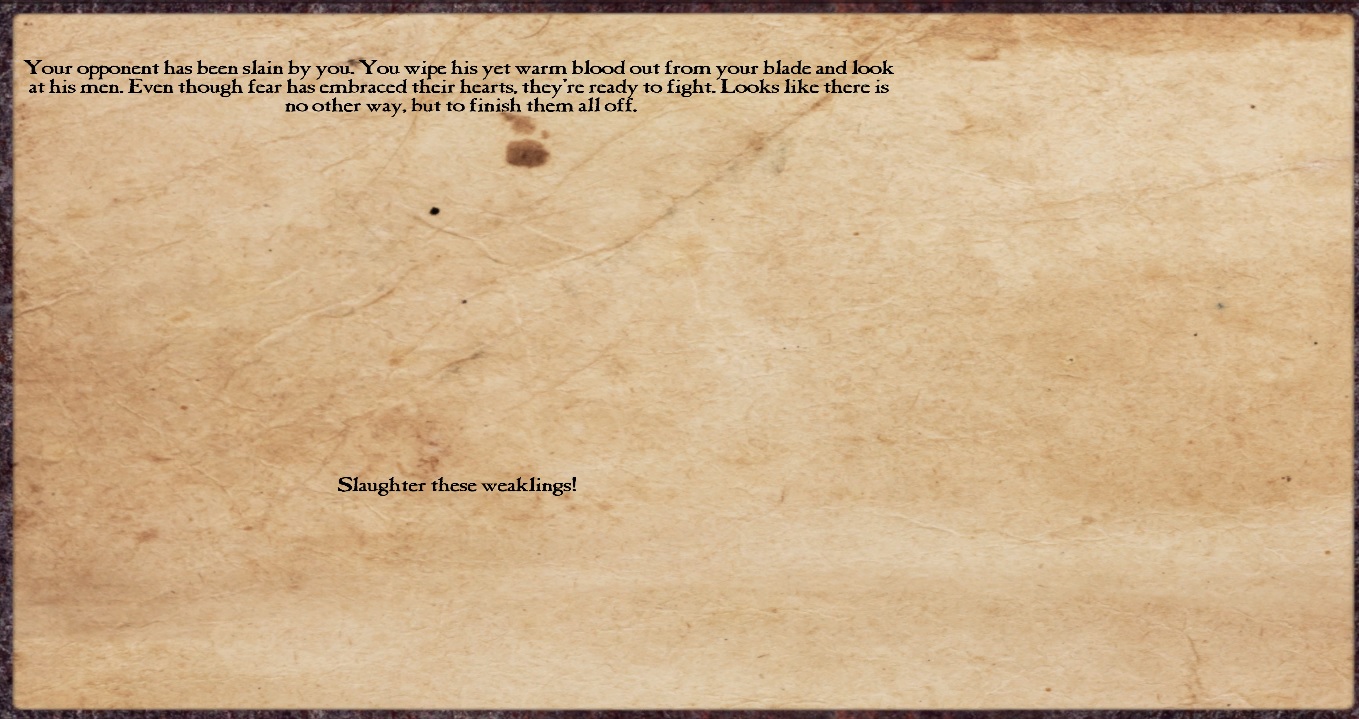 If you die in a duel (or in a battle or somewhere else) you'll transform in a a skeleton. At first it won't be the most intresting feature of the mod as skeleton won't be able to visit cities\villages\castles, talk to lords and do other stuff people do, but with further development it gives a great possibility to add third quest line for undead player. But for now undead player will be able to join wandering skeleton parties to his army and plunder stuff. 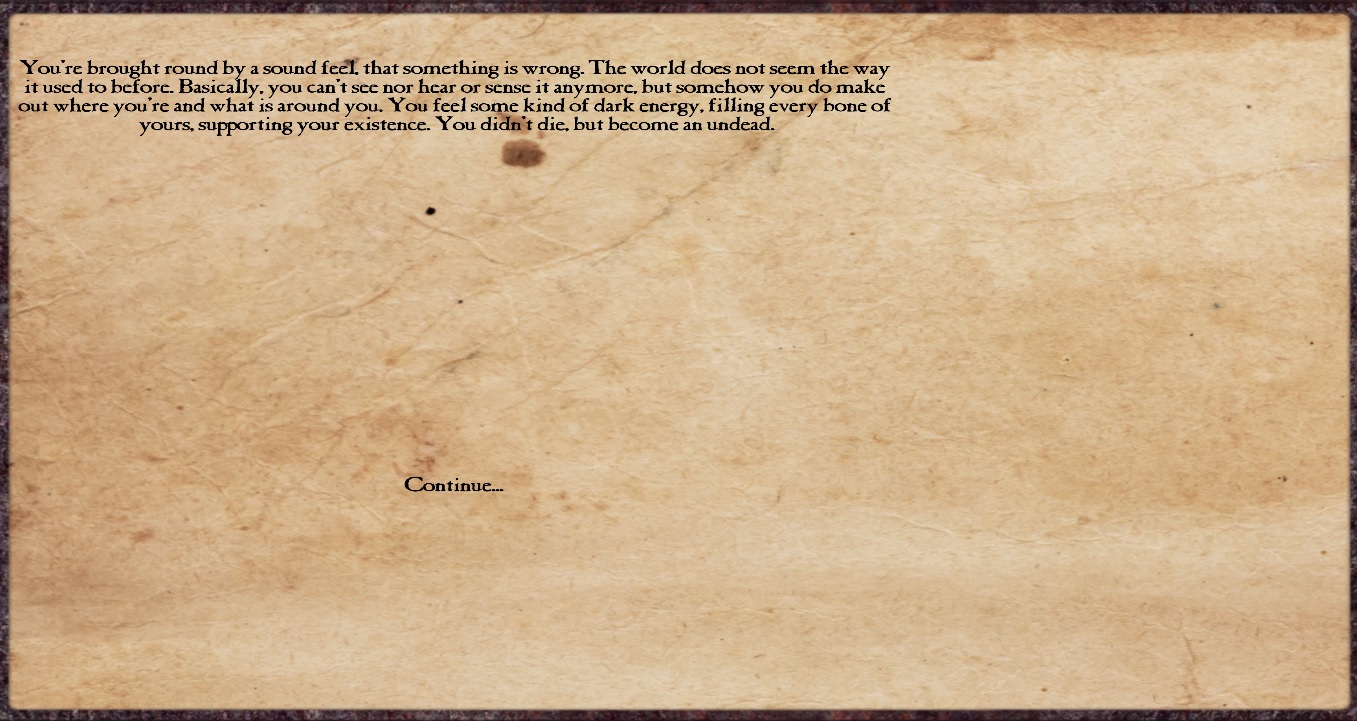 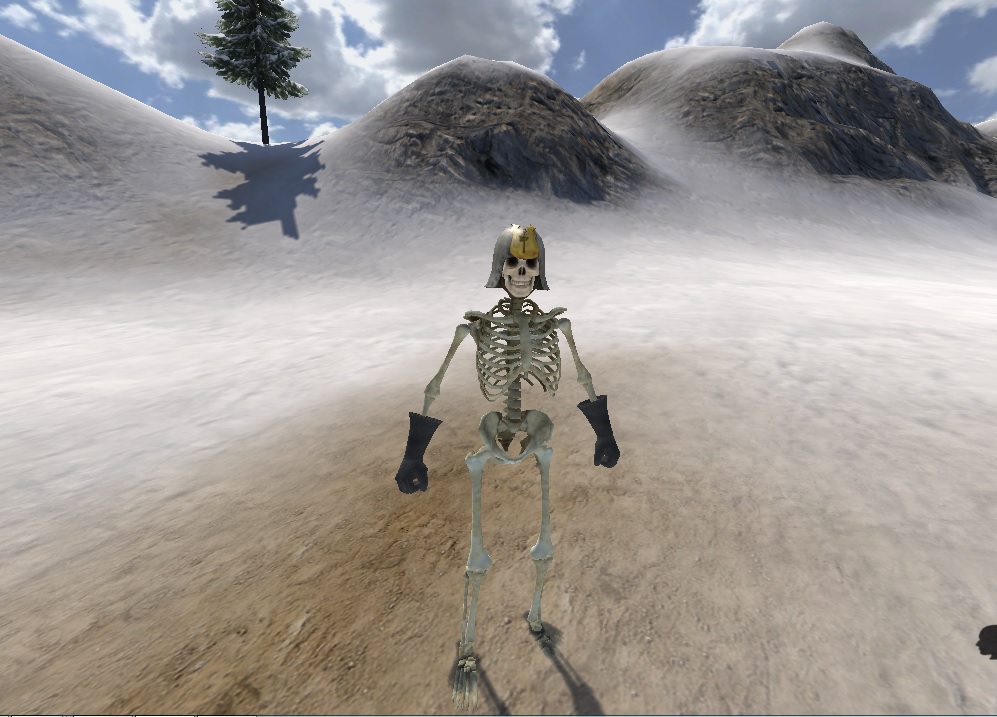 Amazing features, looking forward for more.
So we can kill all the lords now? Do they respawn or is there some sort of lord generator?
Or is it when lord dies their land goes to the faction leader?

Well, I haven't yet dared to make permanent death for lords, as it could drastically be reflected on the balance. On the other hand, lords won't have less than 200 hp and their equipment will be badass, so it won't be really easy to kill them. We'll see, I might consider adding permanent death for lords in the next test version and see how it works.

You need to give us a way to become strong like the lord.

This just made my day!

This is awesome, I love all these new features!

This is singleplayer or muutiplayer??