Hello, dear readers! Last time we discussed the destructive magic of Fel, then in this, the eighth diary, we will discuss about the opposite force to the Light - Void, and its influence on the world.

Let's not go far into cosmogony (you've already read the Chronicles?), and briefly let us say that the Void (Darkness) by its nature is constantly expanding, capturing new spaces and distorting them, "parasitizing" on everything. It is outside of the material universe, but the flows of its unstable energy often break through the veil of reality in different places - thanks to the actions of living beings.

In the mod, the Void is similar to the Fel Mechanics: it will be represented as a religion and as a modifier of the character's state (traditional variation from 0 to 100). In this case, the level of desecration of Void will have two stages, but unlike Fel, even a small portion of the Void can immediately lead you (or them to you?) into the hands of the Old Gods.

When you reach the first stage (35-65) you will be forced to abandon your faith and secretly begin practicing one of the religions of the Void. Remaining in this stage, you will be more or less protected from the influence of the Ancient Gods and can quietly practice the magic of Void.

The second stage (66-100) is loss of own will. You will simply lose your own will and blindly obey your masters. Your own thoughts and desires will drown in the venomous dialect of the Old Gods and their servants, there will be no turning back, this stage is the last and only salvation can be only death. And, of course, the Gods will grant you with generous gifts: your body will undergo different mutations; until finally the tentacles, swollen and outgrowths cover you so much that you become a nightmarish form of N'raq (the faceless one). The Cult of the Twilight's Hammer is responsible for the distribution of the Void in Azeroth. This is an old orcish clan, whose leader before the First War was Cho'gall, one of the strongest ogre magician and a member of the Shadow Council. The clan participated in the invasion in Azeroth as a part of the Orgrim's Horde, but after the treachery of Gul'dan was considered destroyed. However, in some way Cho'gall managed to survive and save the remains of the clan, and then contact the Old Gods. Over time, the power of the Twilight's Hammer grew so much that his actions led to the Cataclysm and other disastrous events before the return of Deathwing. In our story, the Clan begins its activities shortly after the invasion of the orcs. Their fanatical missionaries have a set of unique abilities for manipulation and sabotage: control of the mind, the ability to leave the Void "label" on the character (which will lead to considerable attention from the Old Gods) and even the awakening of the sleeping C'Thraxxi. Fortunately, many confessors can fight the manifestations of the Twilight's Hammer. But even this does not save your priests from suspicion - who knows, maybe their minds are already darkened? If you somehow joined the dark side of the force, then the game in any case does not end for you. As mentioned above, the Old Gods are very generous with gifts for their faithful followers. One of the most effective way to gain their attention and favor is to expand the influence and boundaries of the Cult. And if you served the dark lords with faith and truth for several decades, then they can reward you with the title of supreme general - C'Thrax. The title of the faceless general is not only honor and glory, but also the appearance of mental abilities; for example, controlling the mind of weaker mortals in exchange for piety. 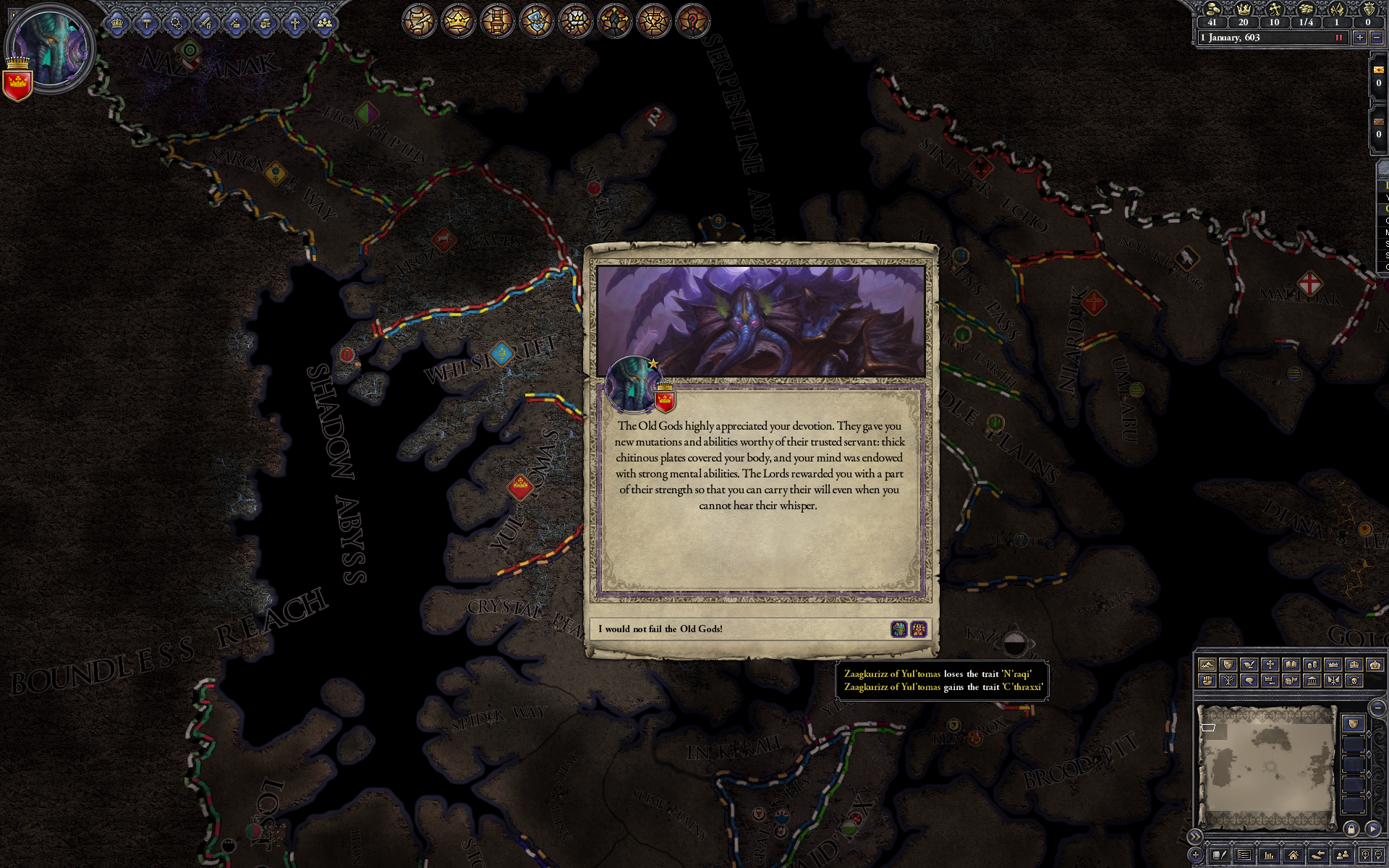 The essence of the game for the follower of the Old Gods is the spread of faith. If your dark religion has gained 75 religious authority and controls at least 4 sacred places, a global event called "Revival of the Black Empire" will occur, after which all independent pawns of the Ancient Gods will become a part of the restored state. The ruler of the Black Empire will be the Twilight Viceroy, chosen by the Dark Lords for the greatest prestige and piety. They are destined to lead the combined forces of servants of the Old Gods to the last battle for Azeroth and to announce the Twilight Hour. Perhaps you will become the Twilight Viceroy? And this is the end of our diary! Thank you for your attention and we warn you that the Twisting Serpent without eyes is watching you from the endless sky...

Check the link you may find interesting!

the portraits and events are just gorgeus!! nice work as always

Sounds amazing, I'll want to play as this cult when it's released!

Do you need me for some beta testing of this mod ? :D

I seriously look forward to the release. Keep up the good work.

What special spells does the Twilight Canticle provide, and how do you use them? (given that you follow the void faith and you are an adult)