Greetings, dear readers! Today’s developer’s diary is related with the one of the community’s most favourite elements in the Lore of Warcraft – The Scourge.

The Scourge’s background begins in the distant world of Draenor, when the beckoning whisper of eredar named Kil’jaeden have reached the Ner’zhul’s ears. The daemon of the Burning Legion has deceived him, forced to believe in draenei’s conspiracy. The Elder Shaman, trusting in Kil’jaeden’s promises of great power, has helped daemons in their war against draenei. However, soon he begun to understand that orcs, his own people, are becoming the minions of the Legion, but it was too late. Gul’dan, the Ner’zhul’s own apprentice, has told about master’s doubts and was generously rewarded by Legion.

When the Horde has been defeated in the Second War and the Dark Portal destroyed, Ner’zhul raised his head and became the leader of orcish people. He united the fractured clans, rebuilt the Dark Portal and attacked the world of Azeroth once again. Let’s will not go into details of ups and downs of the Ner’zhul’s Horde on its way to the new defeat by the forces of the Alliance, which started the Draenor company after their victory in the home world. The leader of the Horde decided to open lots of portals to other worlds which led to the planet’s destruction.

The enraged Kil’jaeden killed the old orcish shaman and imprisoned his soul in the block of magic ice with the throne inside. Eredar teleported this throne to the world of Azeroth and placed in in the Northrend. All the servants of the King of the Dead were sent there along with their new king. Soon Ner’zhul understood that he can command their own servants and he began to prepare for release from his masters. During this time, he created his own army of the restless soldiers, called the Scourge.

This is the “short” historical background of the Scourge. Our story begins with the Draenor too. Right after the end of the Alliance expedition (but it might not begin at all) the Lich King appears in Azeroth and begins to settle in the Ice Crown province. After that necromancers get the new ability – to create the Cult of the Damned to help the new King of the Dead. The cult is focused on infection of cities and castles, preparation the ground for the upcoming Scourge invasion. Members of the Cult are able to corrupt souls of the different characters, raise the dead, bring new diseases and cure their own ones. Moreover, the leaders of the Cult can acquire the immortality and became a lich. 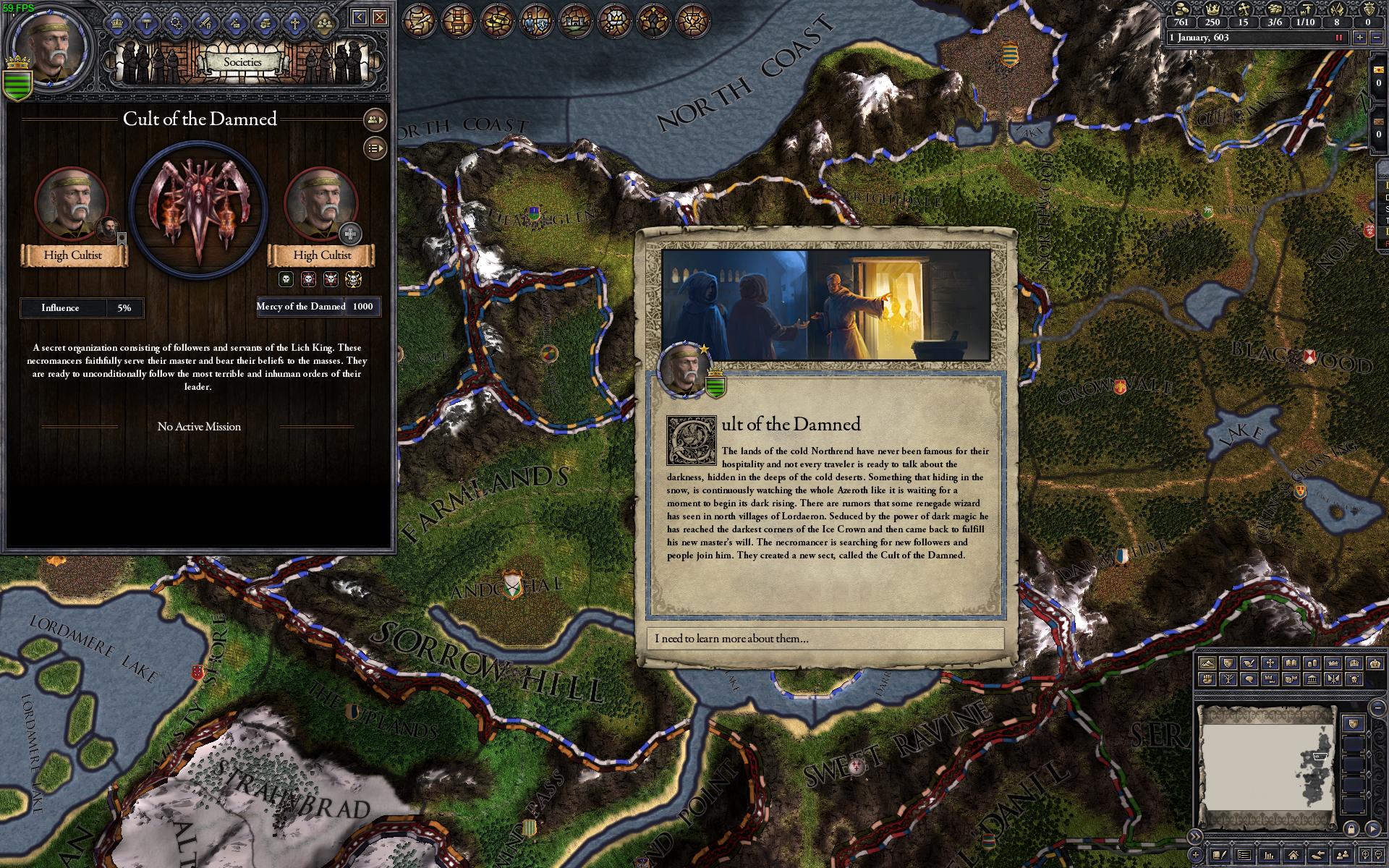 All outbreaks of the Plague are incited by the Lich King. The Plague can infect every piece of the map, but you have to strengthen the forces of the Cult in that region first. It is important to know that not all races can be infected the Plague on its beginning – the Lich King has to modify the disease and create its new outbreaks to make other races get it and, consequently, to strengthen the Scourge. After the infection of the province, all of its diseased population turns into the faithful servants of the King of the Dead, and the province itself receives the “Land of the Dead” modifier, the culture and religion of the Scourge. Later the ruler of its lands gets the special event of separation of infected province in favour of the Scourge. He can either voluntary surrender his territories, or declare war against the Lich King’s forces. In the second case the province will retain its ruler, however on this land there will be an uprising of undead armies. To destroy the province’s modifier, the culture and religion of the Scourge you need to carry out a “culling” (the undead has the opposite action called “Bring Death”). 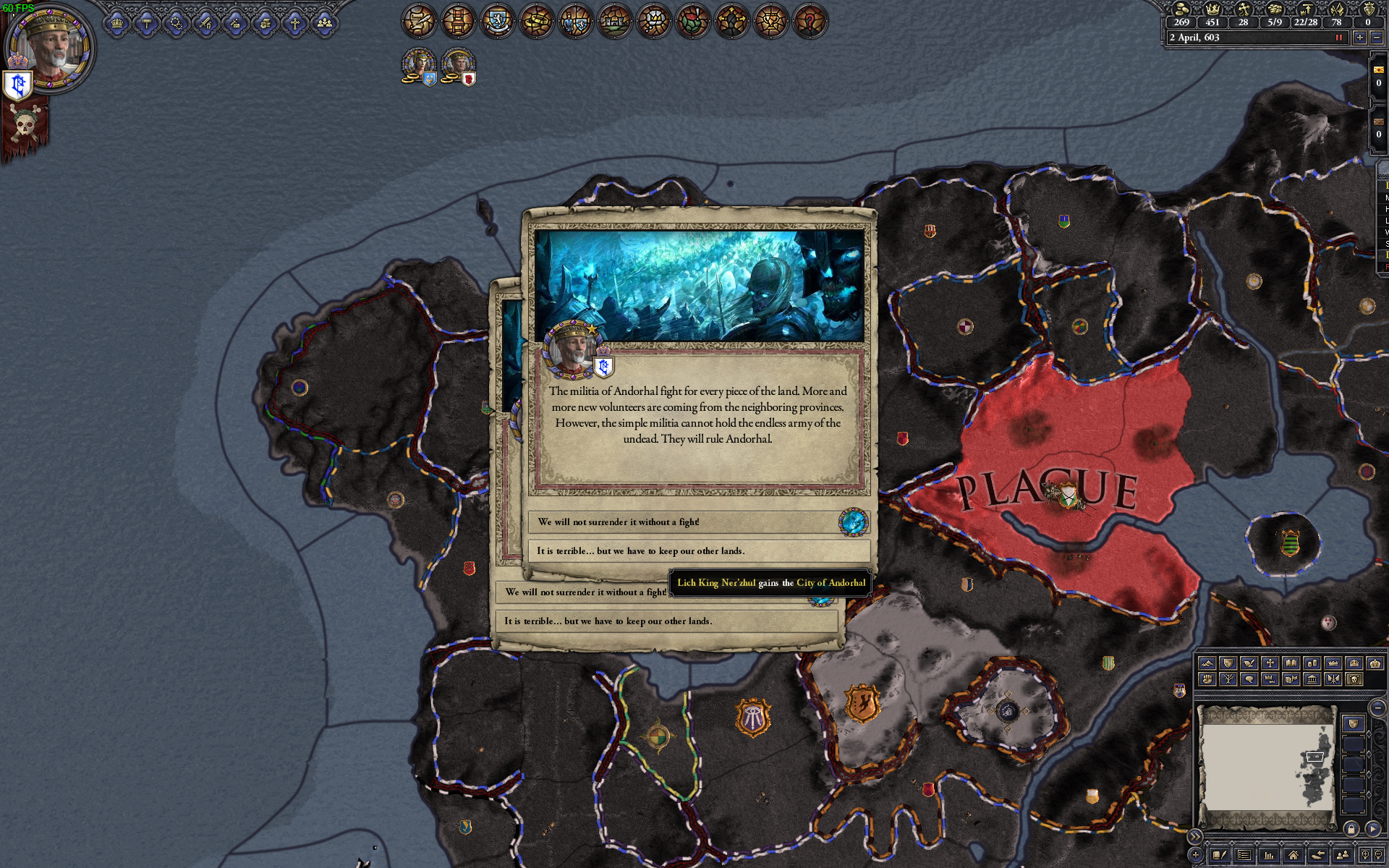 The Scourge attacks with the new claim, “Invasion of the Scourge”. If the ruler of the defending country is infected with the plague, he will simply become the part of the undead army and vassal of the Lich King. If the ruler has immunity, the Scourge will conquer the provinces with “Land of the Dead” modifier and those provinces that will have time to capture. 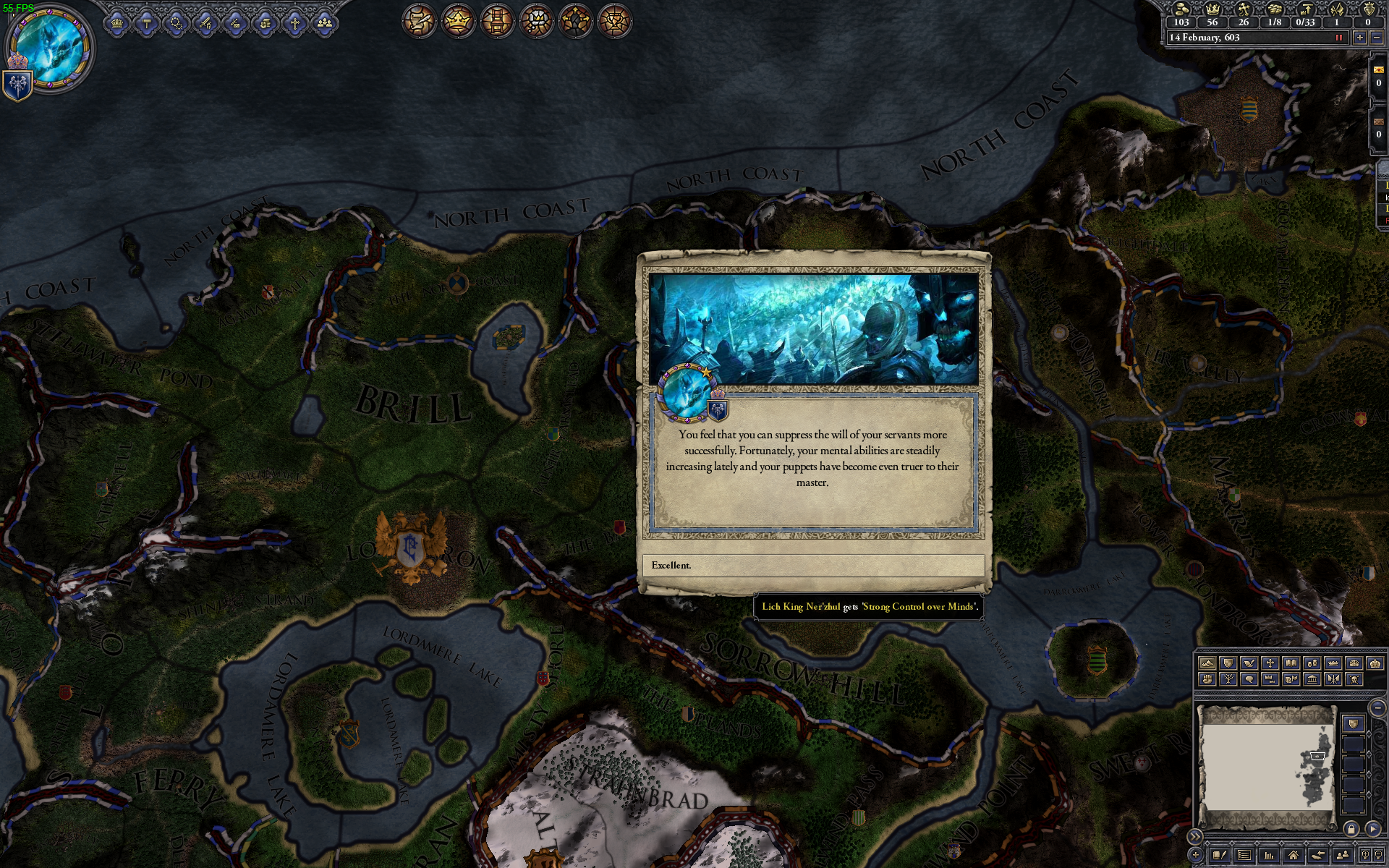 And now let’s talk about the Lich King and control over the undead. The Lich King, like any other necromancer or anyone else who controls other characters, must monitor his level of mind control. If it reduces, then some characters may free from the King of the Dead’s influence and get a very bad relationship with the former puppet master. The Lich King gains the power of mind control from military victories and loses it from defeats.

Even though the Lich King has already died and he cannot die of old age, he can choose his “heir” – the Champion of the Scourge. The Champion is chosen among the all the Death Knights and necromancers controlled by the King of the Dead. And, when the time comes, the champion can merge with his king and start to rule the Scourge by himself. 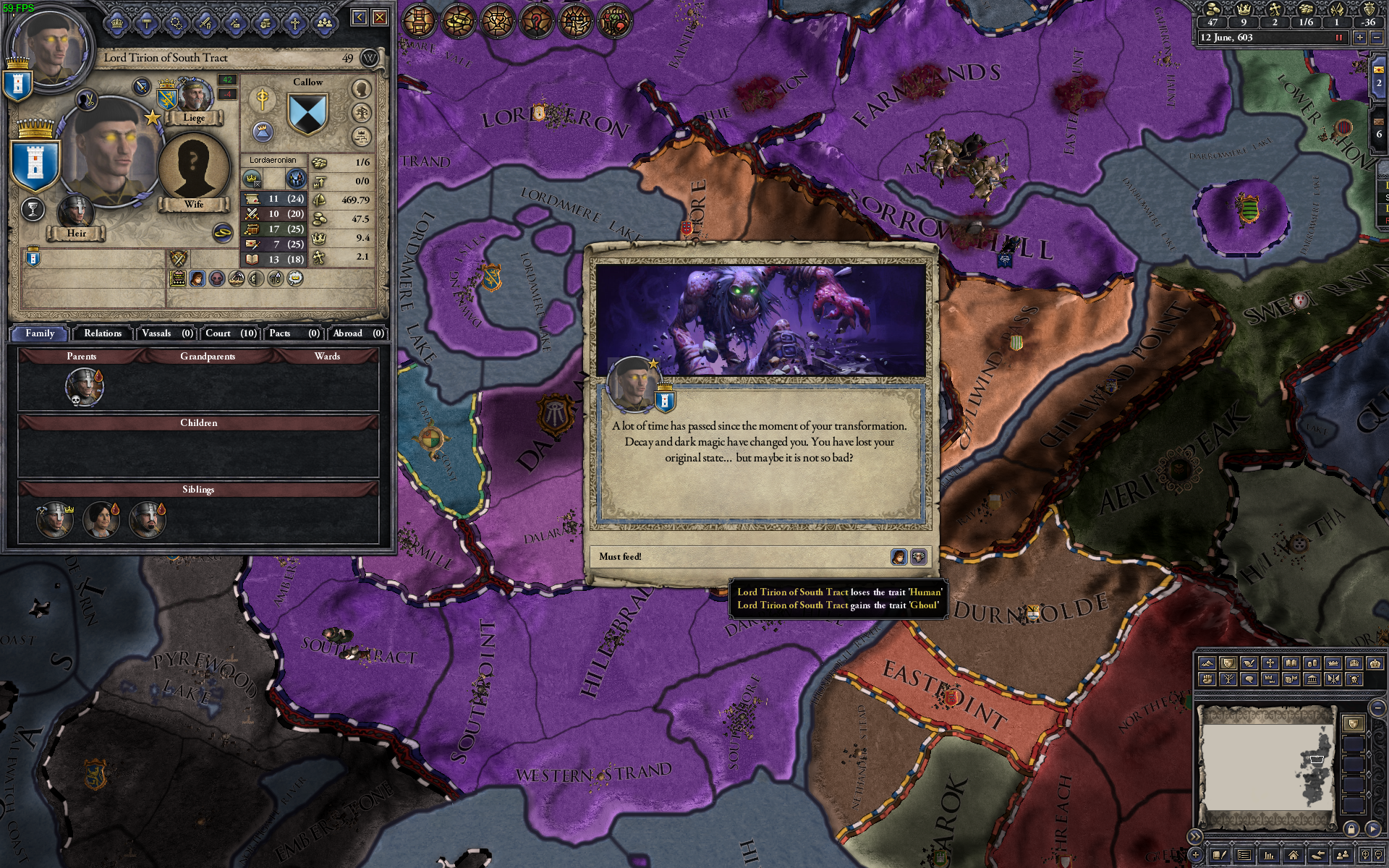 A little bit about the forms of the undead. Almost all undead are prone to rot and this has a very bad effect on their mental and physical abilities. Of course, it will not be so critical for players and rulers, but ordinary undead will constantly experience a variety of inconveniences. You can counteract it by receiving a blessing from the Lich King or through the dark rituals, cannibalism or the special effect of the Plague. Under the influence of decay and dark magic there will also take place different transformations into other forms of the undead: skeletons, ghouls, plague eruptors etc. At these stages races (elf, human, orc etc.) cease to matter and disappear.

That’s all for now! The developer’s team will be going to keep you informed in last innovations of the mod and swears to serve Ner’zhul!

As a massive fan of the Scourge, this is what I've wanted to play for a long, long time. Great work!

can't wait most play for the Scourge

Will legion have it's own cult (Argus Wake for example)?

I wanna play as the Lich King himself. So excited for this mod.