After being Greenlit in just 9 days, we launched our Thunderclap campaign today (supportus.hanakogame.com) to prepare social media and marketing for the Kickstarter campaign next month.

Most Important Update Topics
Our Greenlight campaign on Steam was a massive success. We finished with 69% Yes Votes (39% average), over 7k Yes Votes and over half of every person that visited our page votes yes. We were overwhelmed with thousands of positive comments and only a few areas you guys would like us to address. So a sincere thank you to everyone that voted, commented and contributed to the campaign. 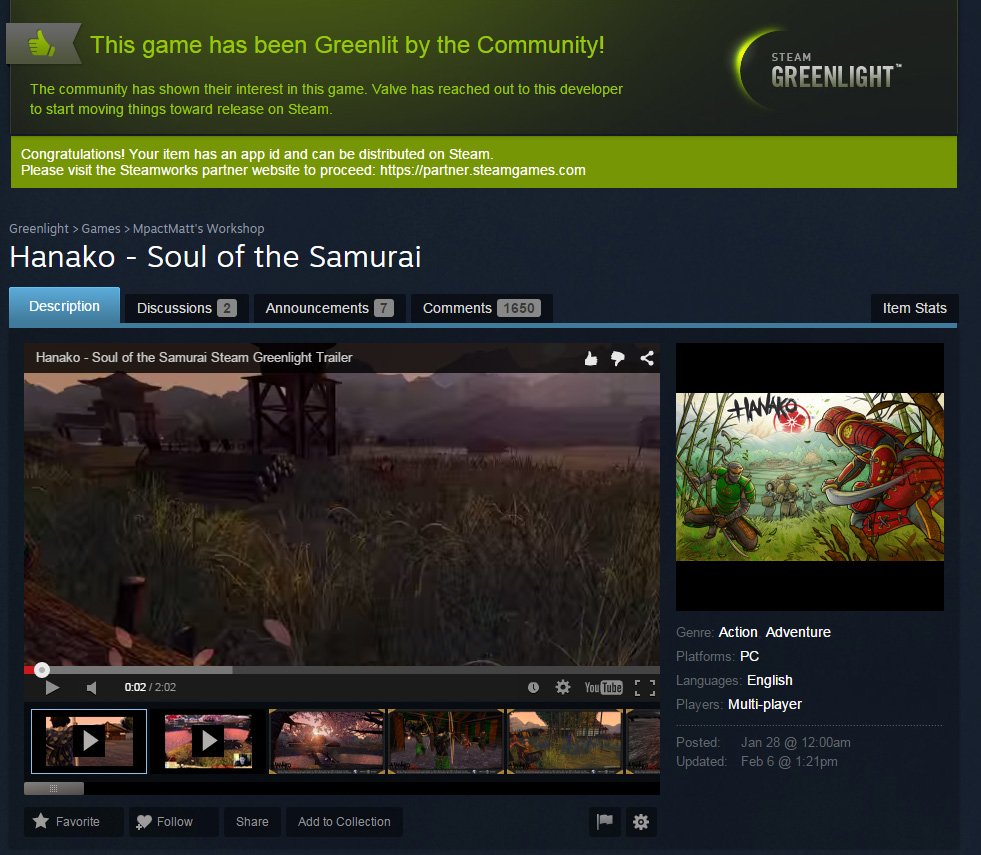 Thunderclap Campaign
We launched our Thunderclap campaign today (Available at Supportus.hanakogame.com). We were introduced to Tclap recently and its a fantastic service. Basically we set a goal for how many supporters we want to reach by March 30th. If we reach that many supporters, then everyone who supported our campaign will tweet or post a message we set all at once on March 30th. This will help ensure that our Kickstarter gets the exposure it deserves after so many years of hard work. 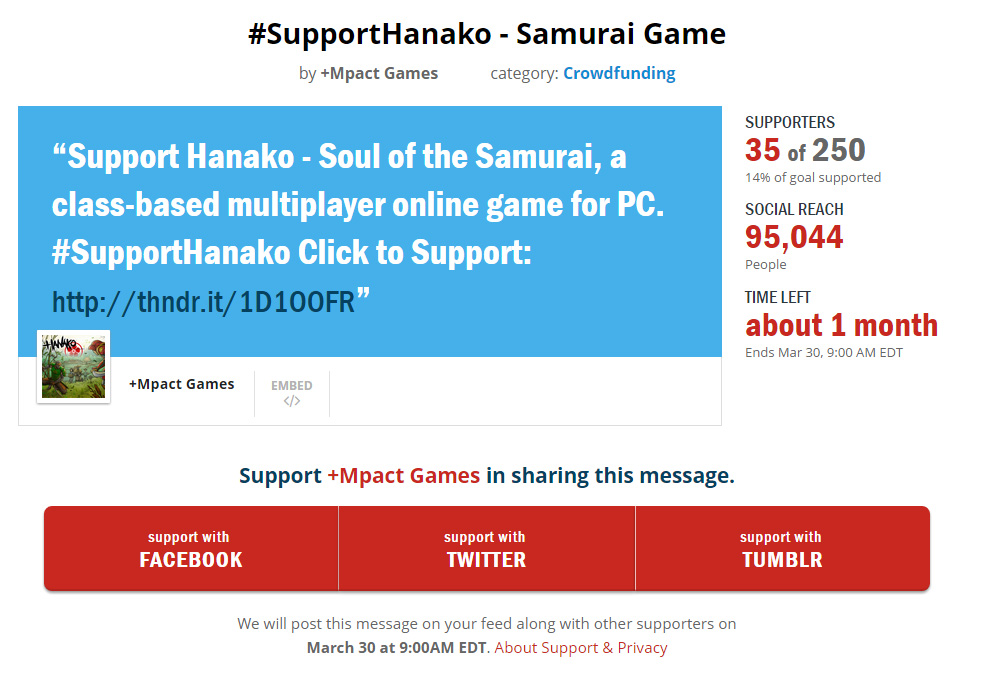 Please visit our Tclap page (pictured above) at Supportus.hanakogame.com and choose one of the three social networks and click Support with [network]. When March 30th rolls around the message in blue will be posted for you and we'll greatly appreciate everyone that takes part. We can't explain how important this is to our Kickstarter, so thank you in advance for checking it out.

Forum Launch
We also are working on getting our official forums launched, we have some design to refine but you can register and start posting here: Hanakogame.com

Kickstarter/Programming Update
We have been planning our Kickstarter since around November of last year. A good portion of our team has worked on Hanako since it started back in 2008, so we're very intent about it being very thorough and extremely well-planned. We're really excited to finally launch our campaign at midnight March 24th. We will do a launch event on Twitch similar to the one we did for our Greenlight launch. Below are a list of things we're preparing:

- A playable, single-player demo fighting waves of evil AI samurai will be released alongside the Kickstarter. We will run high score giveaways for players who can post the highest scores. We're excited to give you guys something to actually play and see where we're headed even in a very early pre-alpha stage.

- A new gameplay trailer with some scenes from our Greenlight trailer and some brand new shots showing some improvements we've made since the Greenlight. This will serve as our Kickstarter video at the top of the page.

- The UI team is hard at work on KS graphics and facebook integration for demo score sharing and some other things. We're sort of in an "all hands on deck" mode for Kickstarter preparation so once we launch our updates will be more about actual dev on moving the game forward, but if we can't secure funding it will be extremely difficult to move forward with a good pace.

Character/Animation Update
Our character team is the only team actively working on normal development production goals. Programming's demo work and AI work will benefit the game indirectly (for player vs. bot matches later) but it is a Kickstarter deliverable. One of the biggest critiques we got on the Greenlight campaign was the movement animations on the Kenshi are fairly weak, so we're addressing them and trying to get them more polished/re-done for the KS demo.

You may have missed this, but we put out a blooper reel of our Greenlight trailer video, enjoy!