Dev diary talking a bit more about the economy, and about Version 0.06.

Economic thought has changed a lot between Victorian times and the present day. The widespread adoption of fiat currencies, the rise and fall of multiple schools of economics, attempts to regulate the business cycle and price levels via fiscal and monetary policy, and the establishment and growth of international and monetary unions are some of the most remarkable ones, although the list goes on and on.

Some of them are not implemented in Victoria II (where money is still mostly coming from gold mines) and some are quite challenging to implement without workarounds (e.g. economic incentives between work and unemployment), and the challenge in the mod is to include some of the major ones, give tools to the player to be able to fiddle with them, try to adjust them, probably fail their first time or two, and then as they get experience, get better at them, know when to implement them, and know when to not touch them at all. 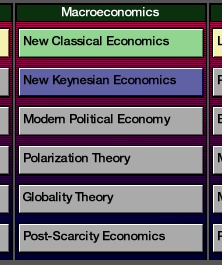 The Macroeconomics techs from the Commerce branch (1980-2100)

Developing an in-game economic model is also challenging due to the fact that there is no agreed-upon economic model in real life, and there have been a myriad of different economic systems put into practice, in some way or another, in the late 20th Century. From laissez-faire capitalism, to traditionalist Islamic economics, to top-down command economies, to hybrid state capitalist models, to neo-Zapatista cooperatives... There are plenty to choose from, and they often have significant disagreements with each other over economic theory, and they should be either explicitly represented, or reasonably abstracted, within the game.

I chose to develop the economic model, at first, around Neoclassical economics and the New Neoclassical Synthesis, as these are the closest thing to an economic consensus in the present day, the one most players are likely familiarized with, and the most relevant one for the first region in the game, North America. Over time, as countries get added and the political system gets developed, I will add more economic paths and effects. 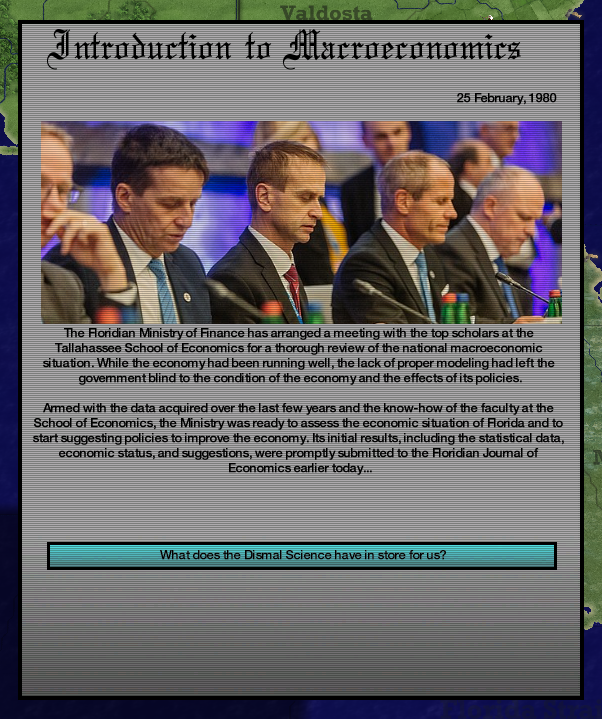 The event introducing players to the economic status and policies in their country.

As of right now, there are two major economic variables that players have to contend with: Economic growth, and inflation. These variables, represented in-game as national modifiers, affect each other: a stronger economy pushes towards higher inflation, higher inflation stimulates the economy, and vice versa. There can be too much of a good thing, too: inflation can keep on growing far past ideal levels, and into double-digit and triple-digit inflation, and more. On the opposite end, low rates of inflation are best for stability and international clout, but this will likely come with a slower economy that's also likelier to enter recession and deflation. It is up to the player to determine their goals, and adopt policies to reach desired levels of growth and inflation. 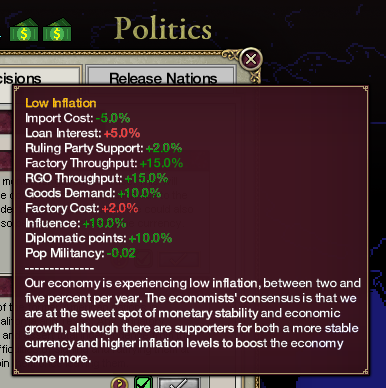 You can see the current levels, as well as their effects, in the Politics screen.

Through commerce-tab technologies, players can start using the two major levers of government economic policy: fiscal policy (targeting economic growth or decline) and monetary policy (targeting the rise and fall of the inflation rate). These tools are effective yet imprecise: It's entirely possible to continue having shrinking inflation even with an expansionary monetary policy, for example, and the more drastic measures also come with more drastic social and political effects: hopefully your policies are successful before the next election!

And of course, pushing the economy too far in one direction can quickly lead to the worst outcomes... 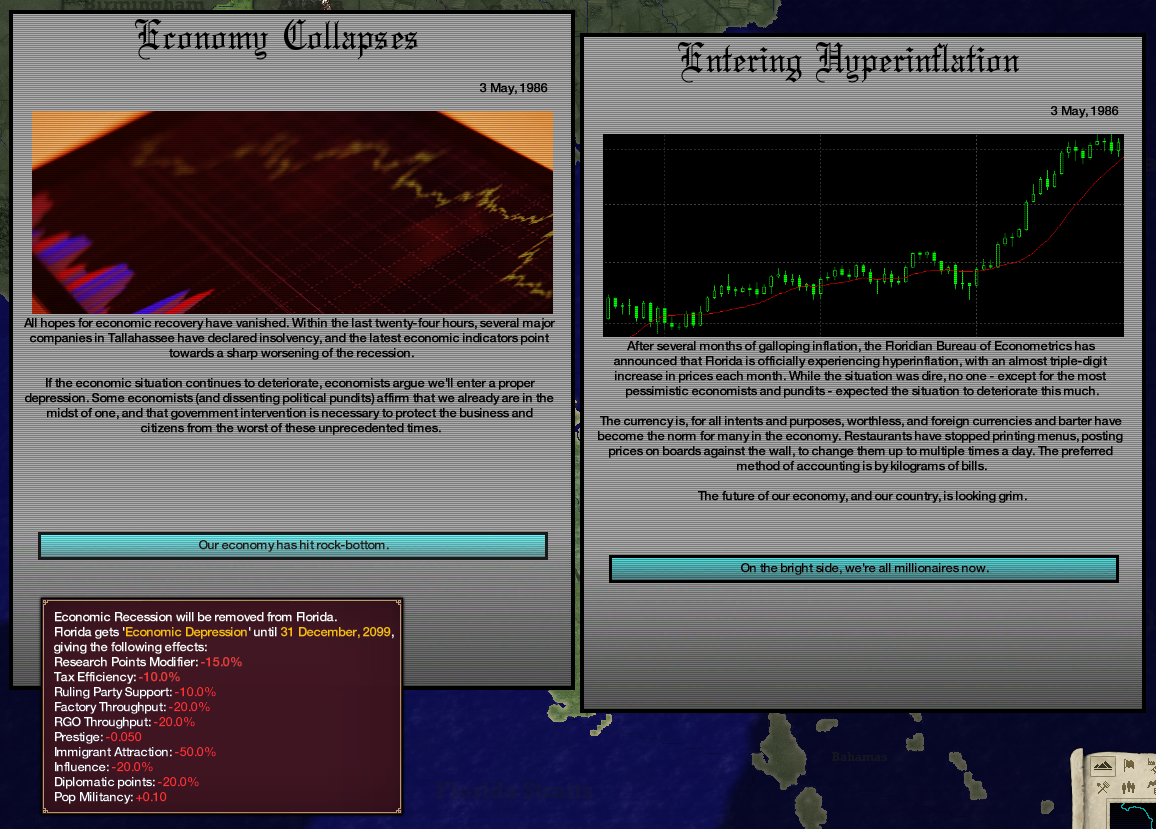 Version 0.06 is out! It includes the aforementioned economic changes, a bunch of graphical changes (especially to the loading screens), resources dotted all over the United States, new songs from Serat, new sound effects, and a brand new and improved Florida, now with 40% more provinces: 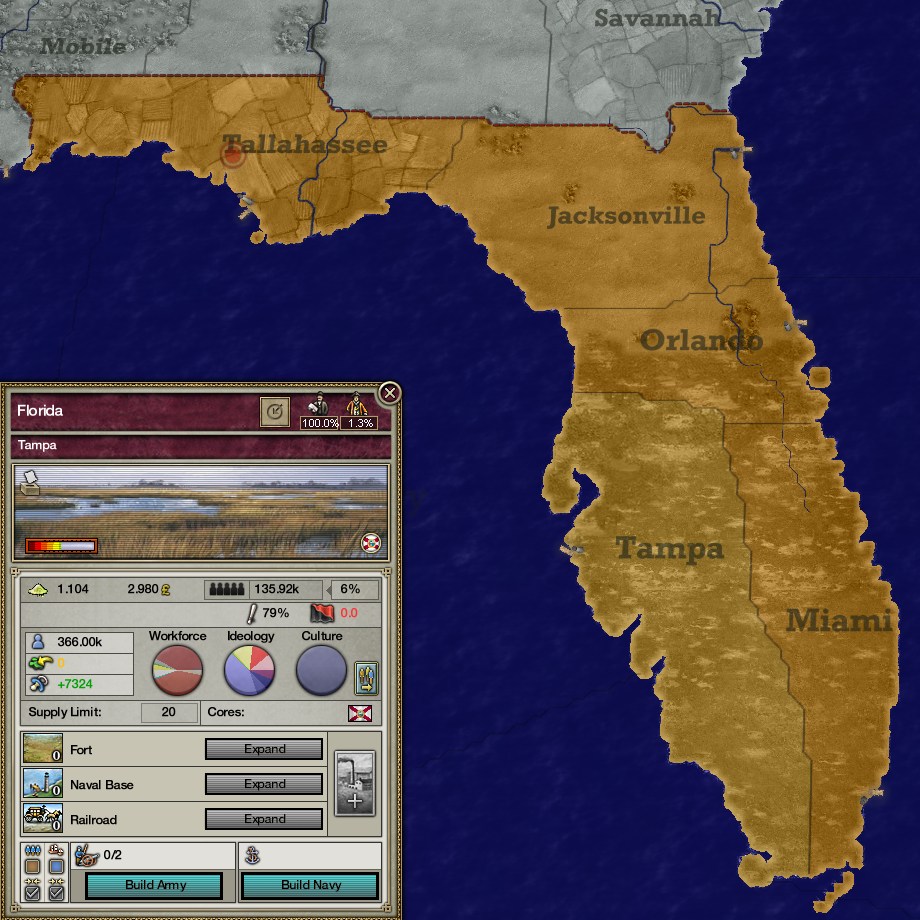 One of the issues with Victoria II's map is that it is incredibly outdated: states like California and Texas have huge provinces (as they were not as populated as in contemporary times), and Florida, the third most populous state, with an economy of over one trillion dollars nowadays, has a grand total of three provinces. For reference, Greenland has four.

So, I added two more provinces, splitting up the state between major metropolitan areas, and allowing for greater economic diversity. I plan to do this with other states and regions that could use a few more states, as well as re-balancing states and provinces along modern division lines.

Next up, I aim to expand the pops across the former USA, polish its politics a bit, and add a lot of events for both the former USA and Canada.