Welcome back to the Arkin dev blog! In this update, we’ve got some great new content, including some major HUD changes and the results of our recent in-person playtest session. Let’s get to it!

Posted by RavenSwordInd on May 7th, 2017

For some time, we’ve been mulling over the issue of feedback and presenting important information to the player. Things like weapon overheat, cooldowns, and target information were not being effectively communicated leading to annoyance and frustration. While all this information was on-screen it was hard to find easily while in the middle of a dogfight. In some cases, this was so bad we had players suggesting we add information to the HUD that was already there!

With all these issues in mind we went about overhauling the layout of our HUD to move important information to within a quick glance of the target you’re chasing. Here is a comparison between the old HUD layout and the new: 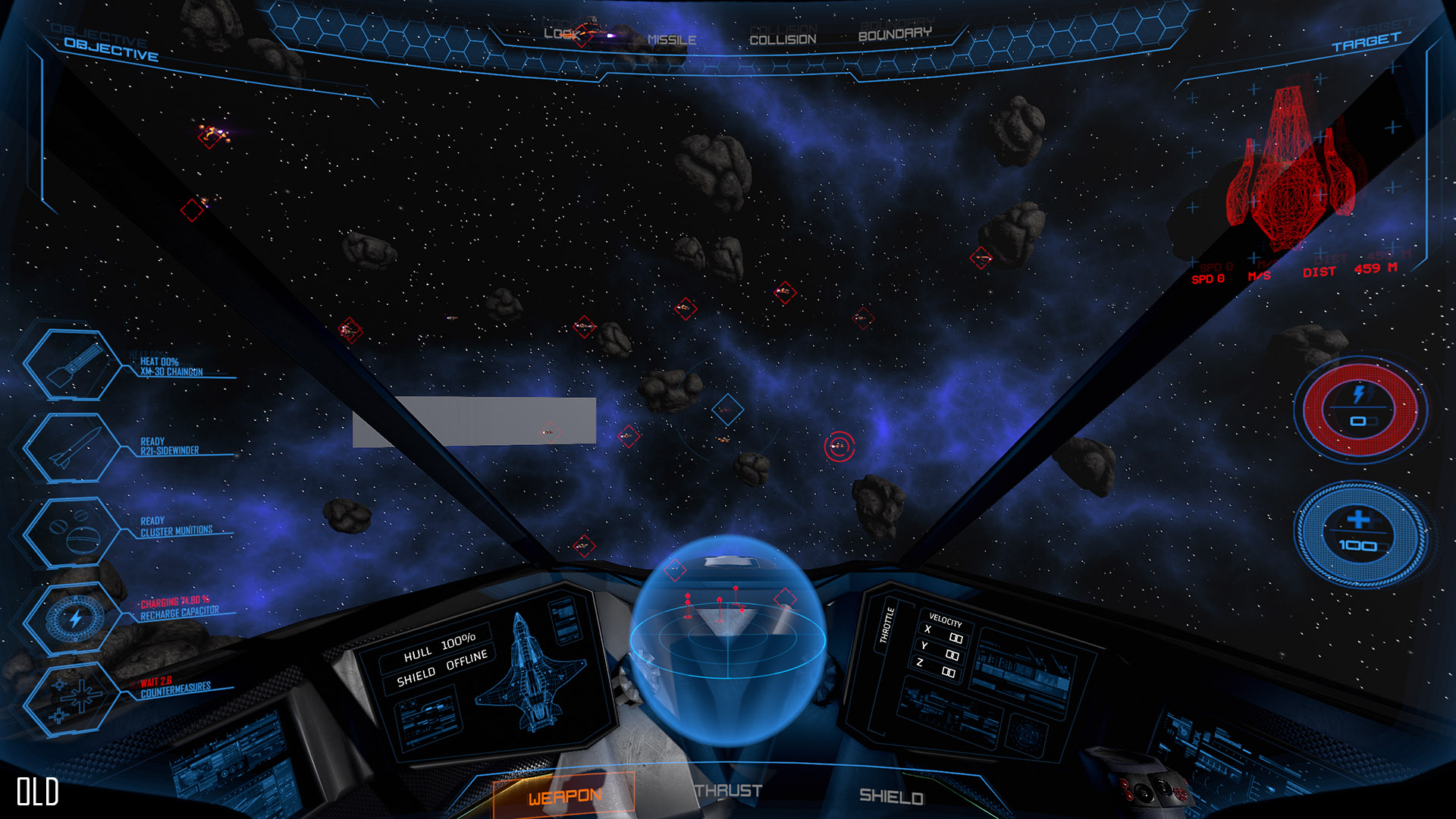 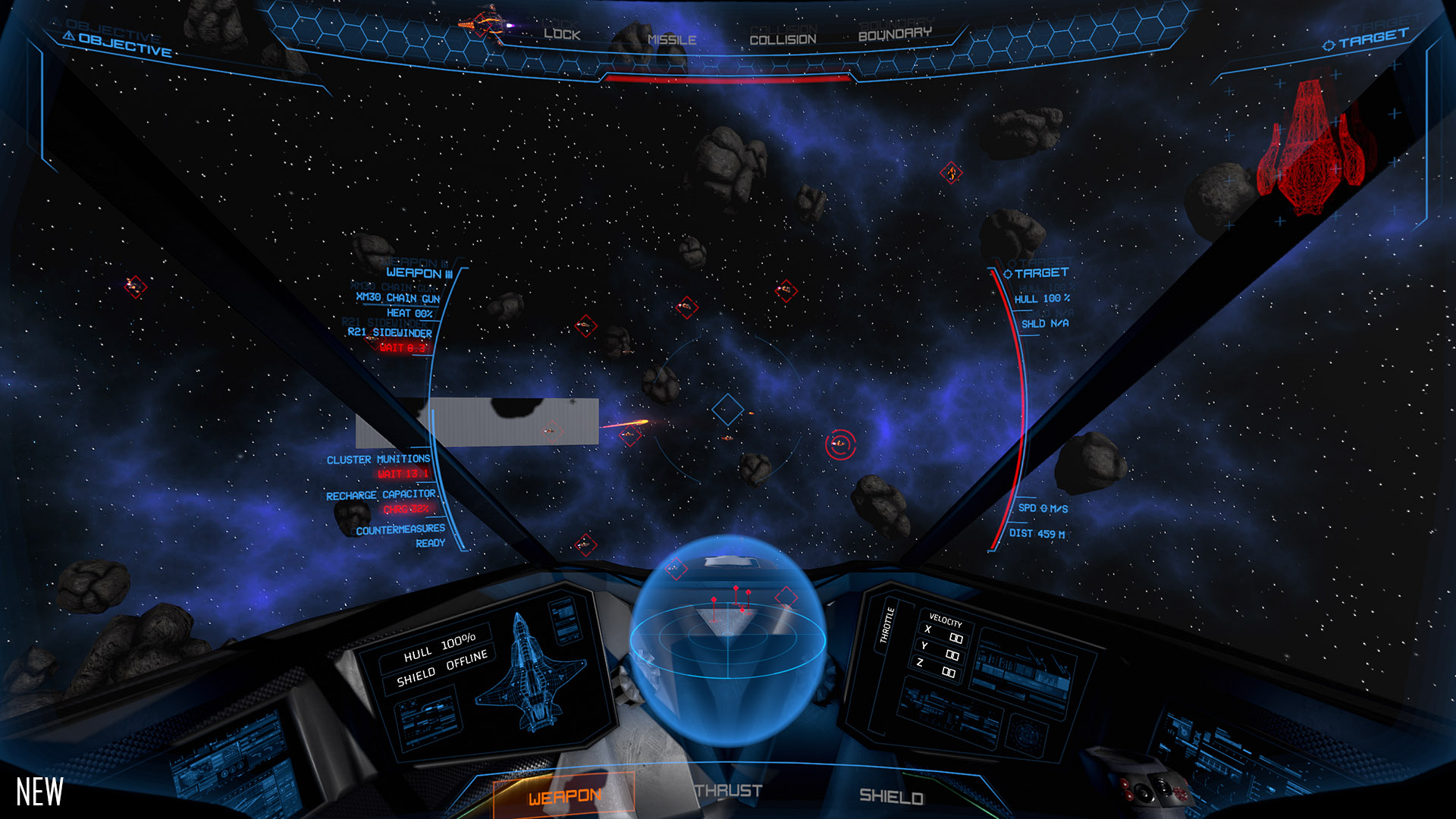 No information was removed in the overhaul despite everything being much more compact, in fact we added new information that had been previously requested in feedback, like target health. Making the majority of the HUD elements smaller and moving everything to the center also has the added benefit of completely cleaning up the sides of the HUD leading to improved visibility.

On the art side, there is plenty of stuff in progress as usual, but we do have one thing we’re very excited to show you all – the finished launch tube hangar! This is one of 6 hangars in the Fury where fighters are maintained, loaded, and stored. The launch tubes are directly connected to the hanger for fast loading and deployment. This is where the Orion remains between missions, and where you’ll see it when customizing your load out. 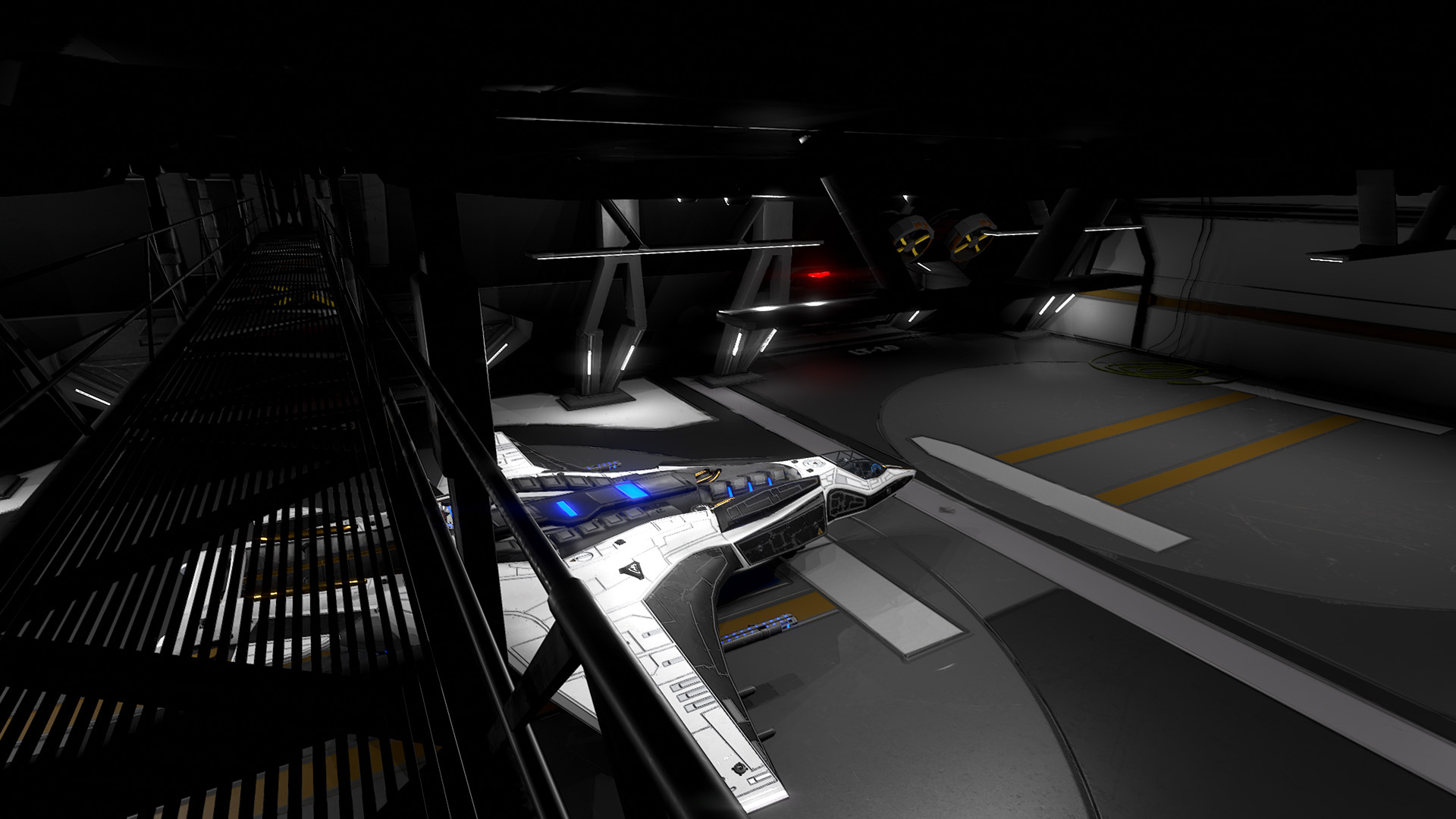 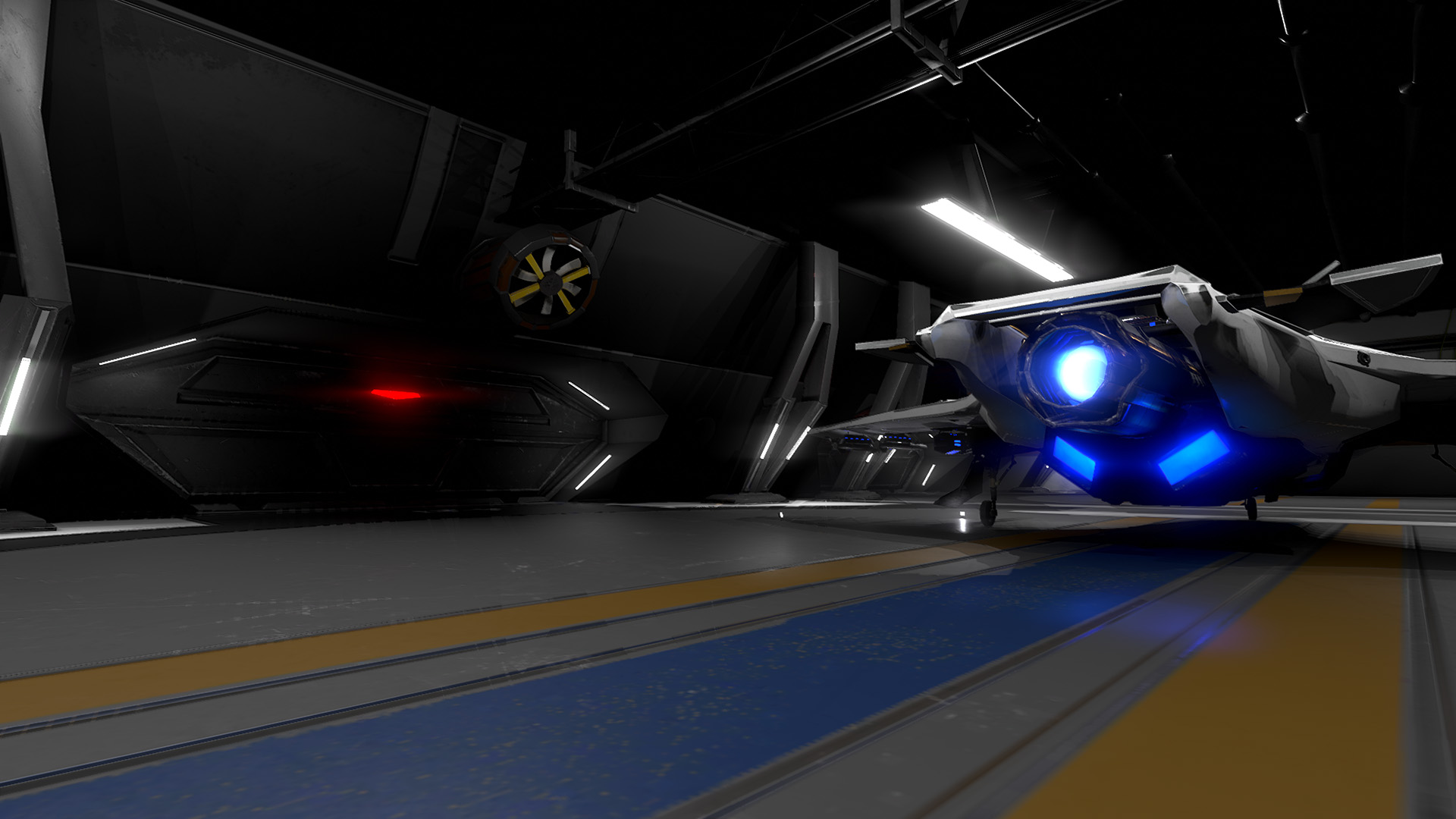 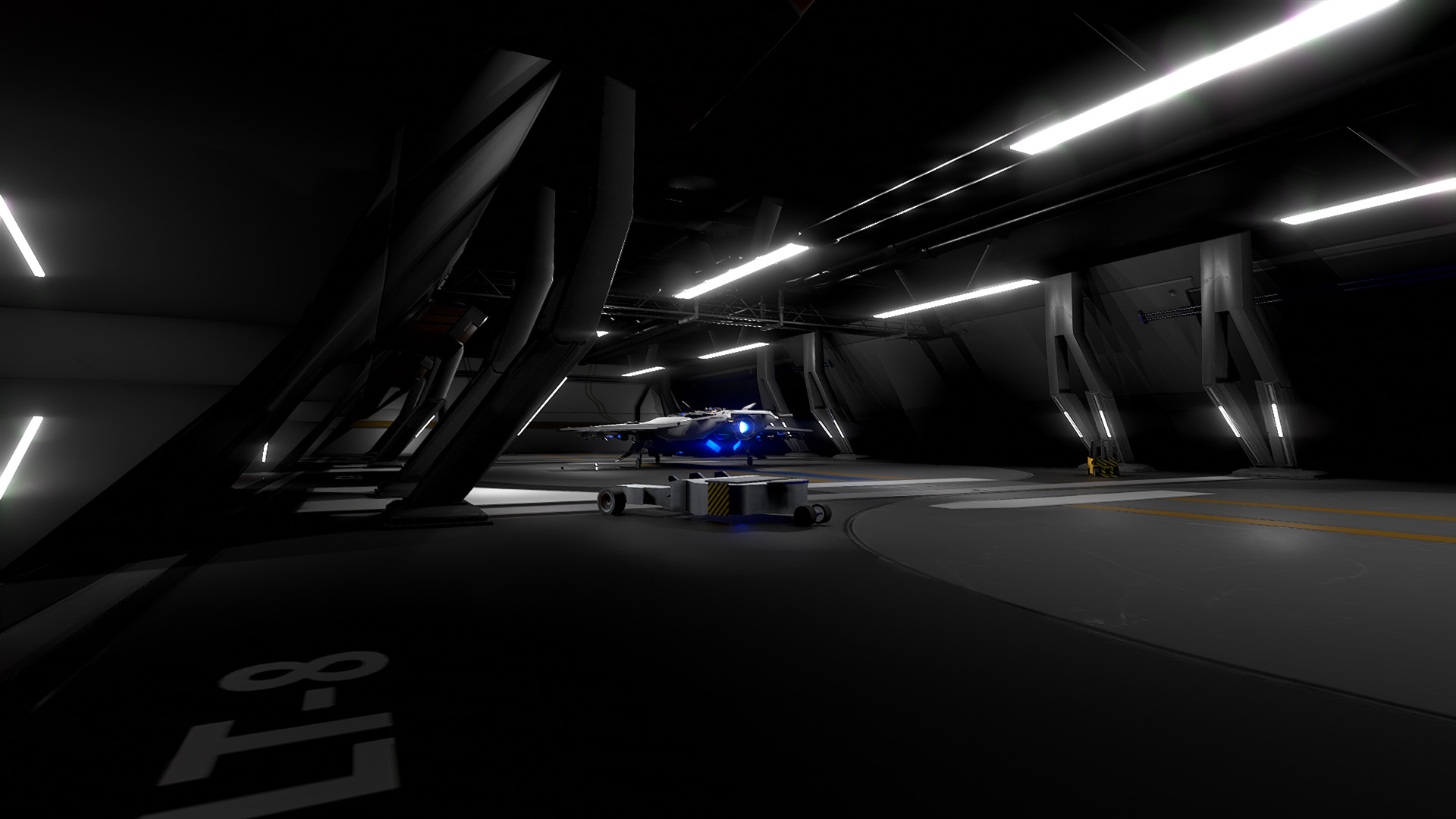 A few weeks ago, we once again had the opportunity to host a playtest session at our former school, Algonquin College. The session consisted of about 20 students who were in their final year of the Game Development program – the same program we all graduated from two years ago.

The build that was play tested was the latest version of Arkin, including the updated HUD. The playtesters had access to the first part of the game in its entirety, including the prologue, tutorial, and the first two missions of the campaign. We were really looking forward to doing this playtest in person. While all feedback is invaluable there are some things that only come out when you observe people playing the game first hand. You’ll see things that a tester wouldn’t know were wrong, or that they might not write up in their feedback.

We were both excited and nervous heading into the session with all kinds of questions in our minds. What kind of feedback will we get? Will people like it? Is there going to be some disastrous bug we missed that will ruin everything? In the end the answers to those questions are: great feedback, they did like it, and yes there was a disastrous bug but it occurred late enough that it didn’t ruin everything.

So what did we learn from the playtest? Short answer – a lot. Our primary goal was to get as much gameplay feedback as possible – bugs and technical issues were secondary. Our testers all provided great responses with lots of detail and using that information we’ve compiled a list of priority items to tackle. We’re looking forward to seeing the impact these improvements will have when we release our next build to our Alpha testers.

That’s all for this update! One final note regarding our next Alpha build: we’re looking to release a new update soon that includes the new HUD, updated hangar, more voice acting, bug fixes, and playtest-based improvements, so if you’re a tester you can look forward to that! Thanks for reading and we’ll see you next time!

VR isn't currently on our roadmap - we're focusing 100% on making the rest of the game solid first. However it's something we've thought about and we have the equipment to develop it, we just need the time to do so.

I am glad this is singleplayer, and non-VR. By best wishes to developers on this project! Shame I did not know about this project earlier (kickstarter, alpha access)