You will be able to try the mod very, very soon. A demo has been announced, along with a wonderful update regarding the final release date. Get psyched!

It's been 3 months since the last update, and the reveal of the RealRTCW version along the final release date. Since then, radio silence as usual. But today, I have held yet another "Top Secret" premiere on YouTube, where I shortly showcased the mod again, and made some serious announcements. Please, take a look at the trailer below.

Before we dive into the biggest announcement, let's take a look at the trailer's smaller but still important highlight: revised release plans. Don't worry, nothing's been delayed. On the contrary: Wolfenstein: Enemy Territory Single-Player will be released on Steam on November 19 instead of November 30, to coincide with its release on Mod DB happening on the same day (early access: November 5). But that's not all: Wolfenstein: Enemy Territory Cooperative will be released on Steam and Mod DB on November 30 instead of 2022 (early access: November 16). 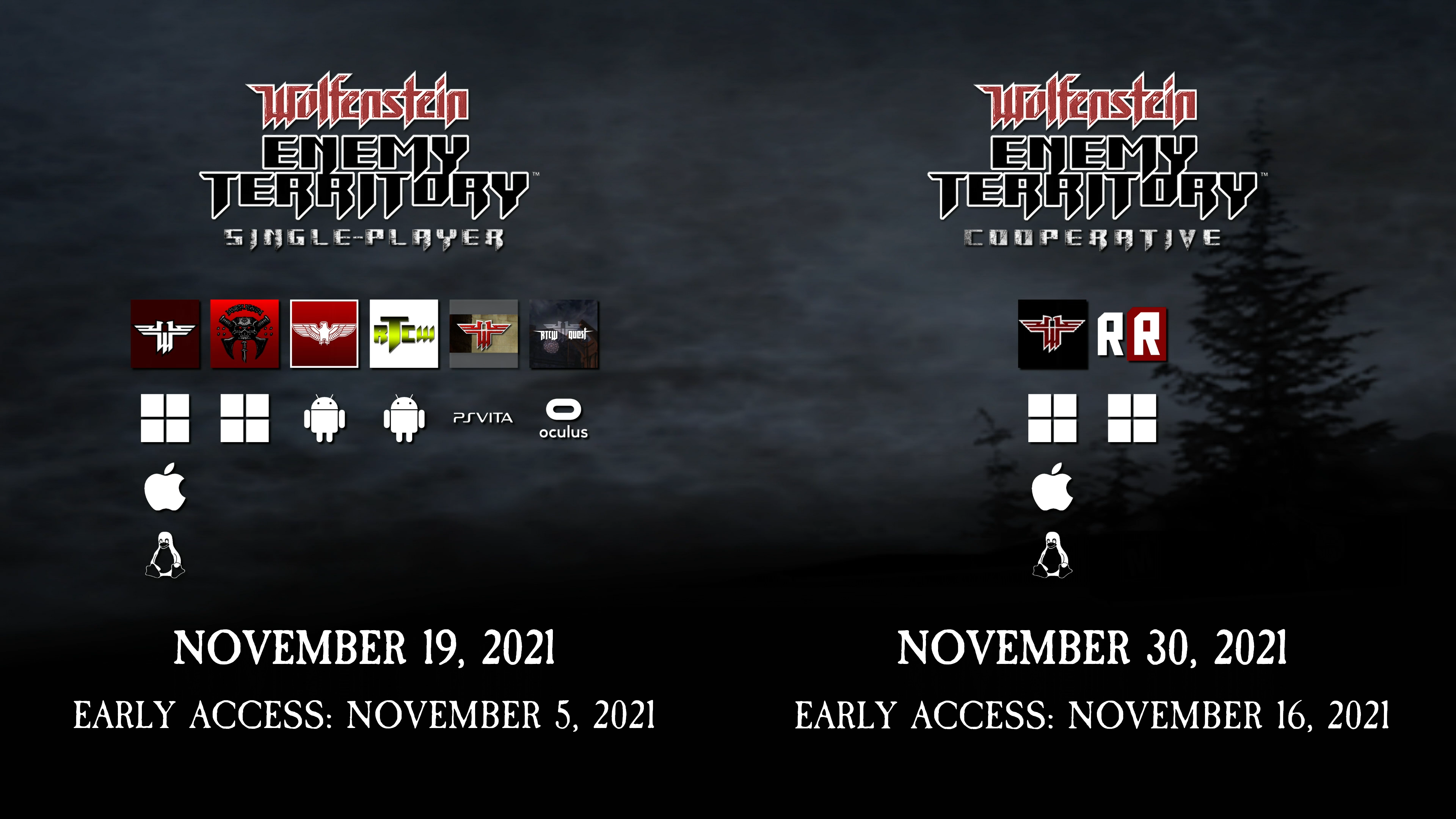 I hinted since 2019 that I would set public testing stages for Wolfenstein: Enemy Territory Single-Player & Cooperative. Well, it was to expect, but it's now real since, as announced in the trailer, you will get to experience the Gold Rush mission ahead of the mod's full version release. Remember when I asked you about your favorite Wolfenstein: Enemy Territory map back in February via a poll on this site? Well, it appears Gold Rush won the crown, that's why it will be in the demo. And yes, anyone will be able to play it, on all compatible platforms and almost all ports of Return To Castle Wolfenstein, just like the final release. Additionally, you will be able to upgrade from the demo to the full version when the mod is released, and maybe even keep your progress.

There's of course no need for me to say this, but a legal copy of Return To Castle Wolfenstein will be required in both cases, just like the final release. Also, please note that the RealRTCW version's demo from Mod DB will be compatible with 64-bit systems only, for development related reasons. 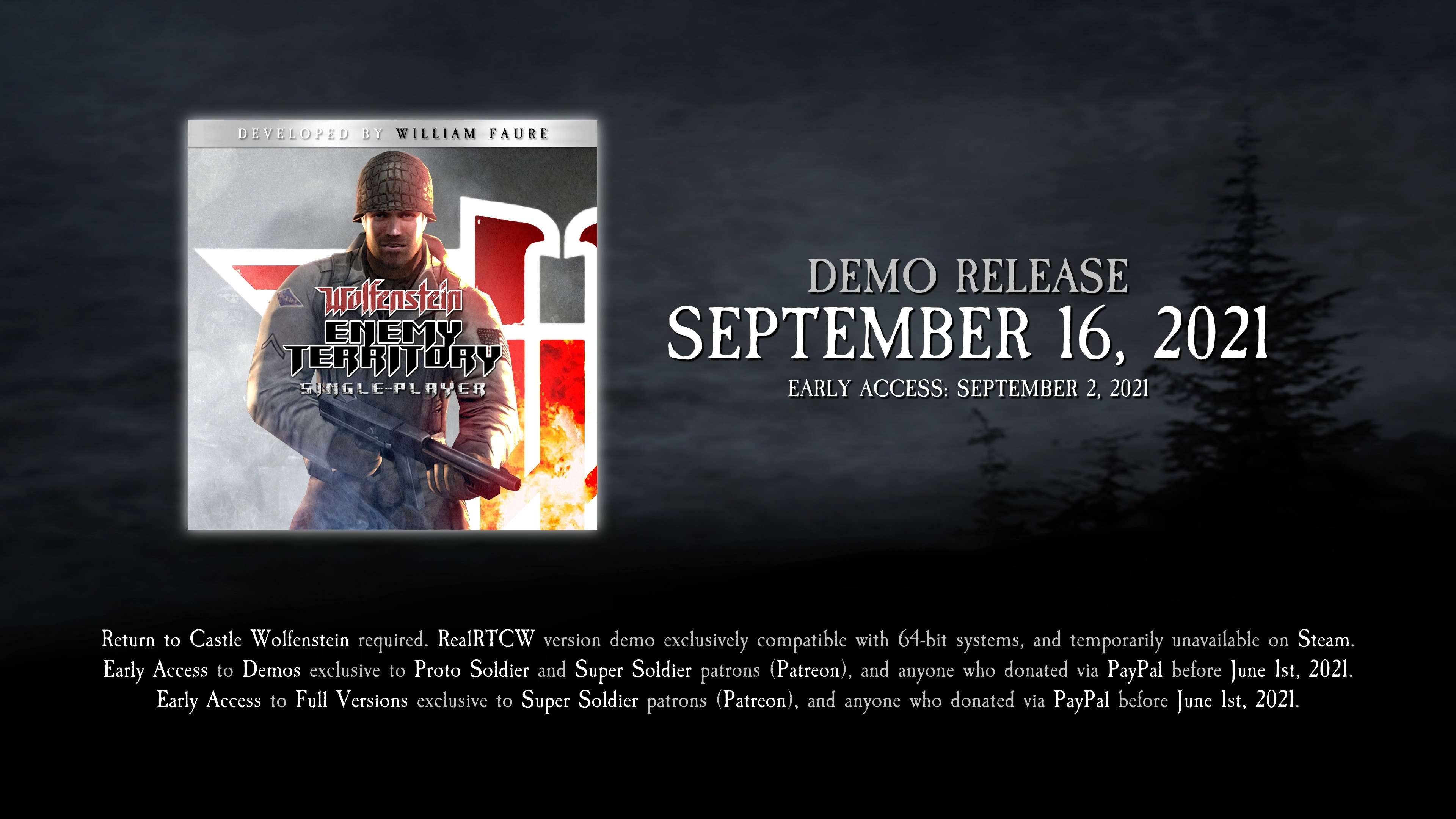 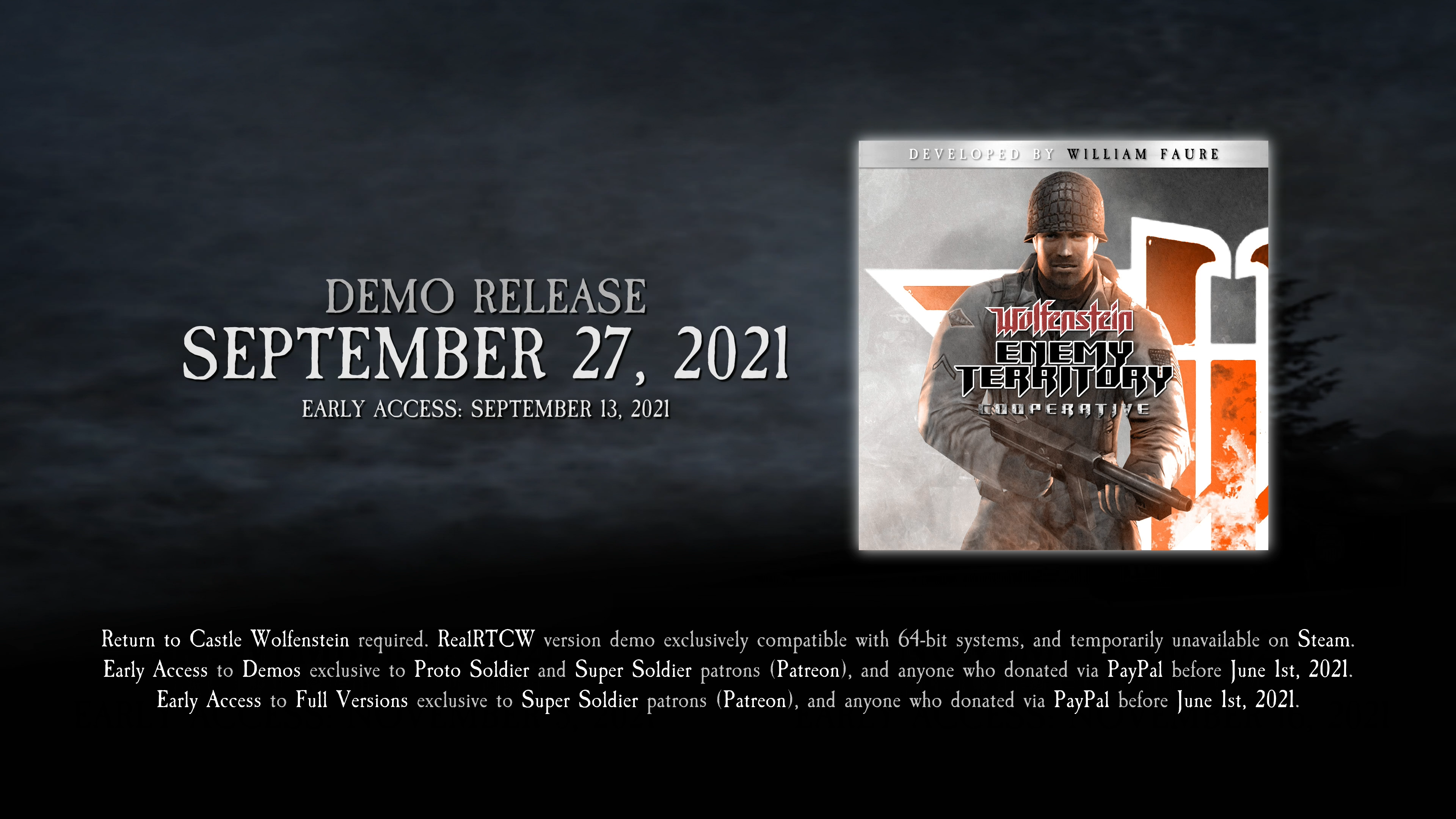 As announced in the latest update, I have opened a Patreon account for my modding activities. My mods are released for free - always have been, and always will be - so those who are/will be kind enough to donate (aka become my patron) will be getting early access to demos and/or full versions of my current and future projects, depending of which tier they've subscribed to (subscriptions ranging from 3-5 EUR), and of course that includes Wolfenstein: Enemy Territory Single-Player & Cooperative and its future expansions.

Great news, much sooner than I expected!
Can't wait to try the demo tomorrow.