A quick primer into what armor upgrades are available to the Crusaders and how blacksmiths work in general for the mod.

Hello all, I hope you are all doing great and have found a productive start to the new year.

Today I want to talk about the decisions I've made regarding the blacksmiths in the mod. At first, I did not think it was prudent to have the blacksmiths upgrade armor, since that would require a lot of new content to be created, but after carefully thinking about this for a while, my idealism took hold. One of the coolest things about vanilla M2TW was upgrading your units' armor and marveling at how your upgraded units looked on the battlefield with their new kit. I want to keep that magic going in this project. However, the caveat is, I will implement said upgrades sparingly. With that said, when upgrading armors you will not really see most units change graphically, this is to save me extra effort/time and to keep the scope manageable.

2. Layered Quilts - Most militia/light troops can upgrade to this level, but you will not see any graphical changes.

3. Mail - This is the baseline/default level for professional and elite troops. The only troop type that started with a lower tier of armor that can upgrade to this from the Crusader States so far are the Turcopoles, you will see a slight graphical difference in their models after the upgrade.

4. Reinforced Mail - All professional and elite troops can upgrade to this level. There will not be any graphical changes for any troop types from this upgrade.

5. Partial Plate - This armor tier I have decided to only make available to elite troop types, in the case of the Crusader States that would be knightly troops. Partial plate was the norm towards the later 1300s and this was the standard in Europe at the time, so this tier and the smith that can upgrade it won't be available until you are in the late 1300s within the game. There will be a noticeable difference graphically after the upgrade. To bring all knightly troops within the rosters of Jerusalem and Antioch to this standard will take a lot of time and effort. So I am not sure if this armor tier will be made available in the upcoming release, but I plan on making it available in a later release once I have done all of the artwork necessary to accompany it.

Here is a partial plate concept I have been working on for the Templar Knights. 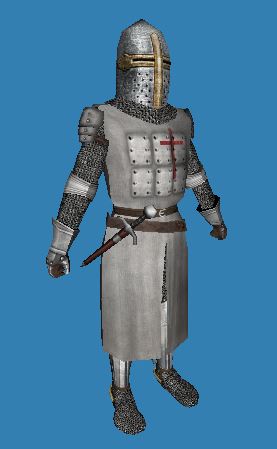 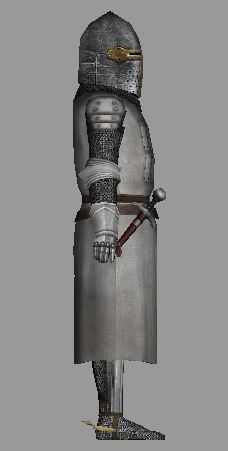 I used the base Templar Knight model and added on top of it the following components: pauldrons, elbow guards, and gauntlets. I painted into the texture greaves and brigandine plates for the chest. Also, I will need to build a new line of helmets: conical great helms and bacinet type helms with visors, luckily this model had one sugar-leaf type great helm (I'll just keep this and let it carry over to the partial plate armor tier). I will have to use the same formula for the other knightly troops (addition of pauldrons, elbow armor, gauntlets, greaves, and some kind of chest armor). So like I alluded to earlier this can get messy and time-consuming, hopefully though, I can pull it off.

Finally, like in Broken Crescent, blacksmiths affect how many unit slots your settlement can support. So the higher the level of the blacksmith, the more unit slots open up to you for training units.

Thanks for tuning in, I'll catch you next time.

they look awesome god so hype for this mod!