This one is for the BFG Edition. It has many gameplay options and tons of bug fixes.

CstDoom3-BFG is a mod for Doom 3 BFG Edition. It has many gameplay options and fixes a considerable amount of bugs. See the next sections for an overview.

Features for Doom 3, RoE, and LM

Below is a description of the main features for Doom 3, Resurrection of Evil (RoE), and Lost Mission (LM). Notice that everything is optional and can be configured using the menus

Show Access Codes: If enabled, when you interact with a GUI that requires an access code (like the keypad of a locker), a window magically appears on the HUD showing the code you need to enter. This is quite handy if you are tired of searching for codes in emails and audio logs. 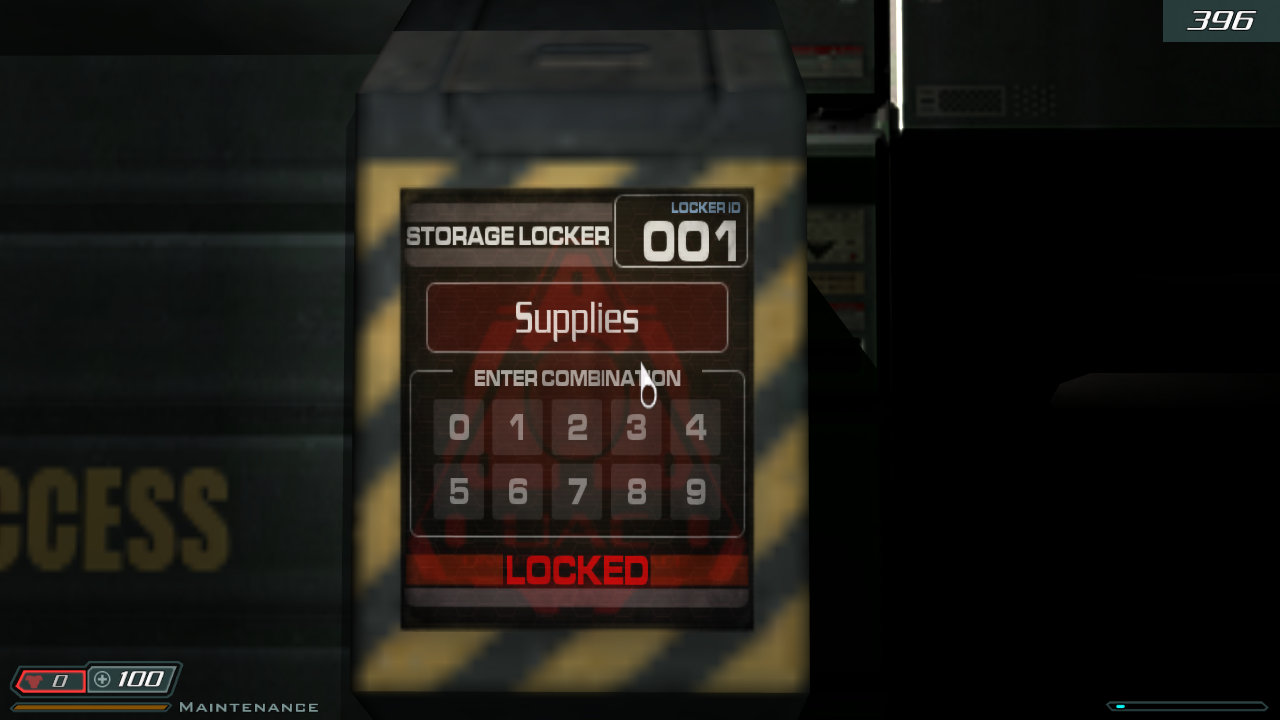 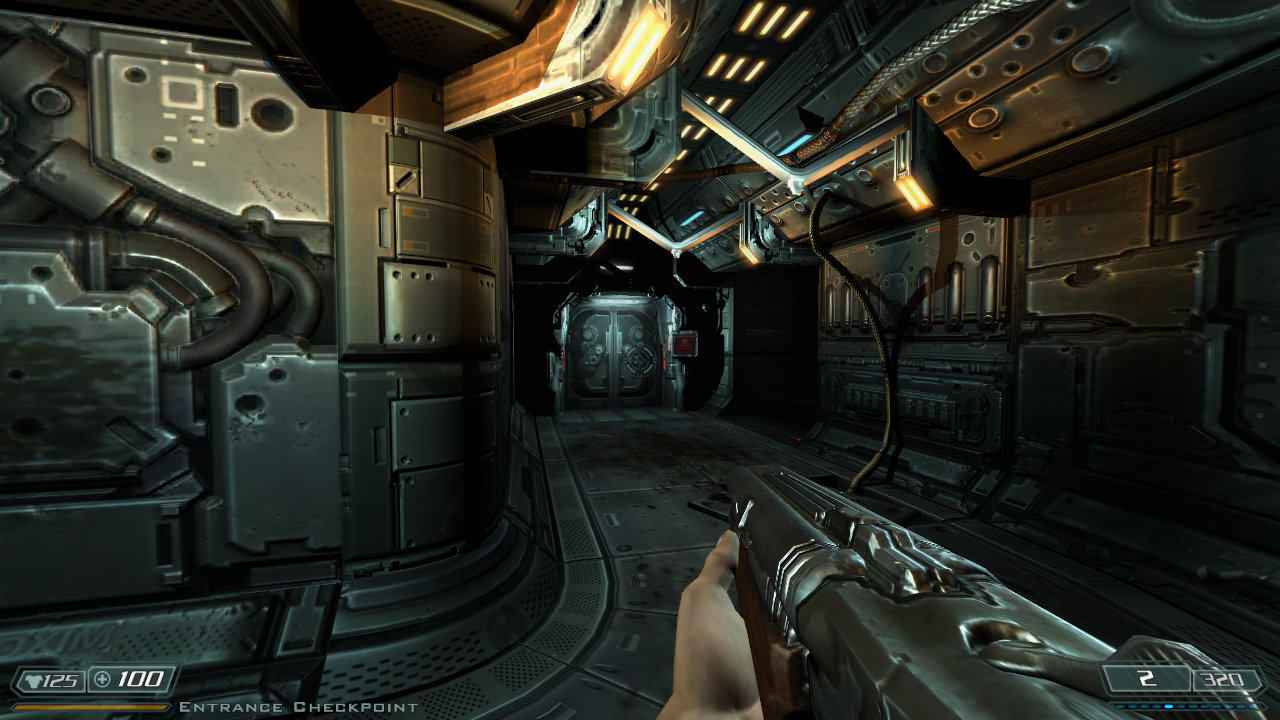 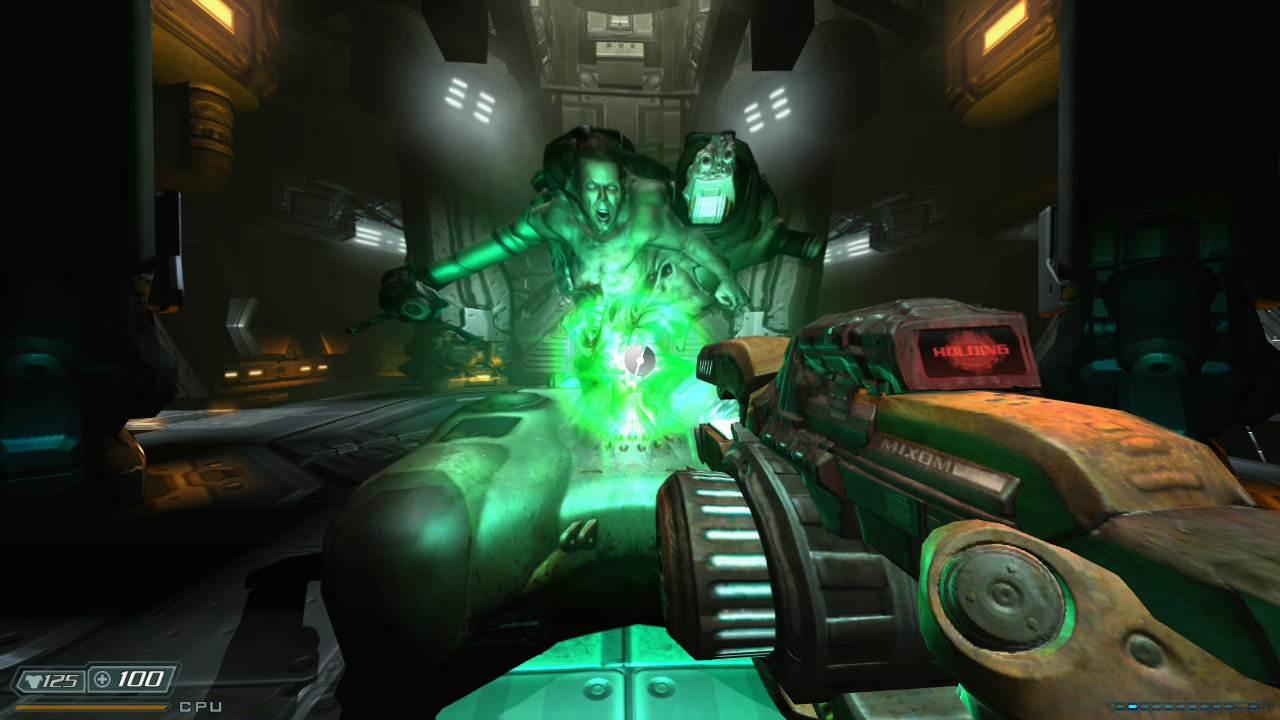 Chainsaw in RoE and in LM: The Chainsaw from Doom 3 can be used in the RoE campaign and in the LM campaign (there is an option for each one). If enabled, this weapon is easily found in the beginning of the game (Erebus 1 in RoE; Enpro 1 in LM). Important: Changing these options take effect only when a new campaign is started. 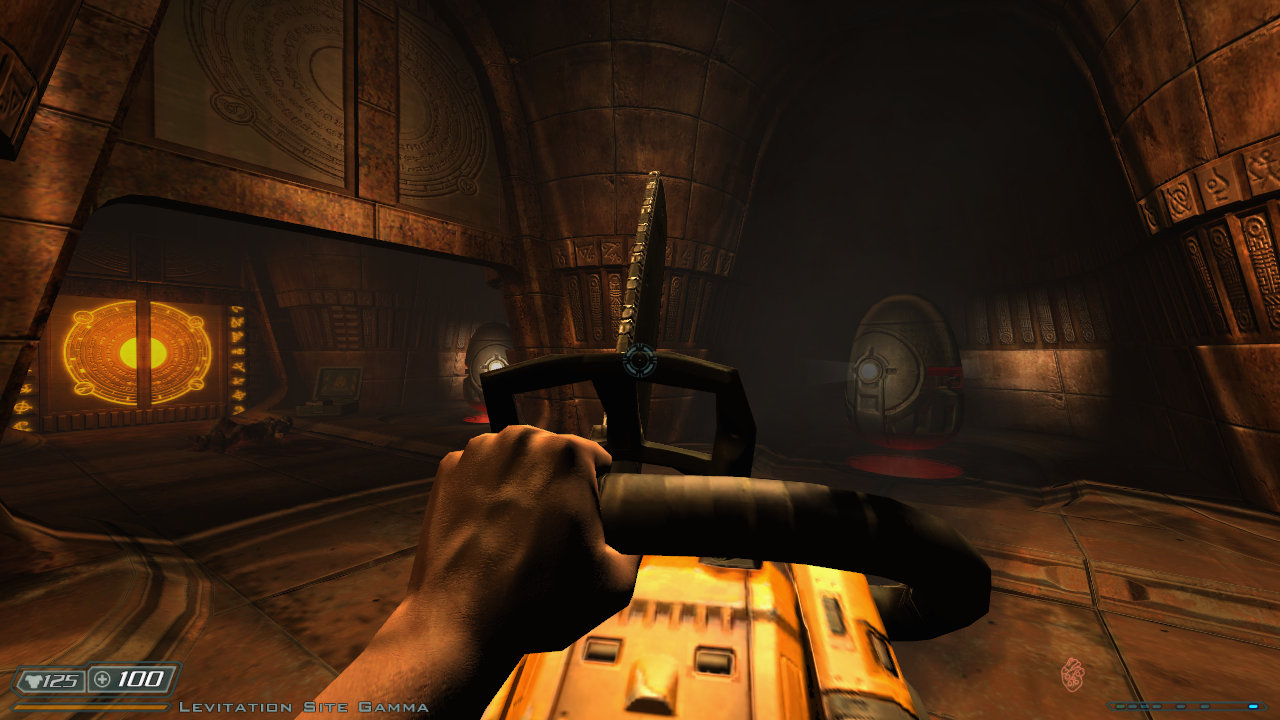 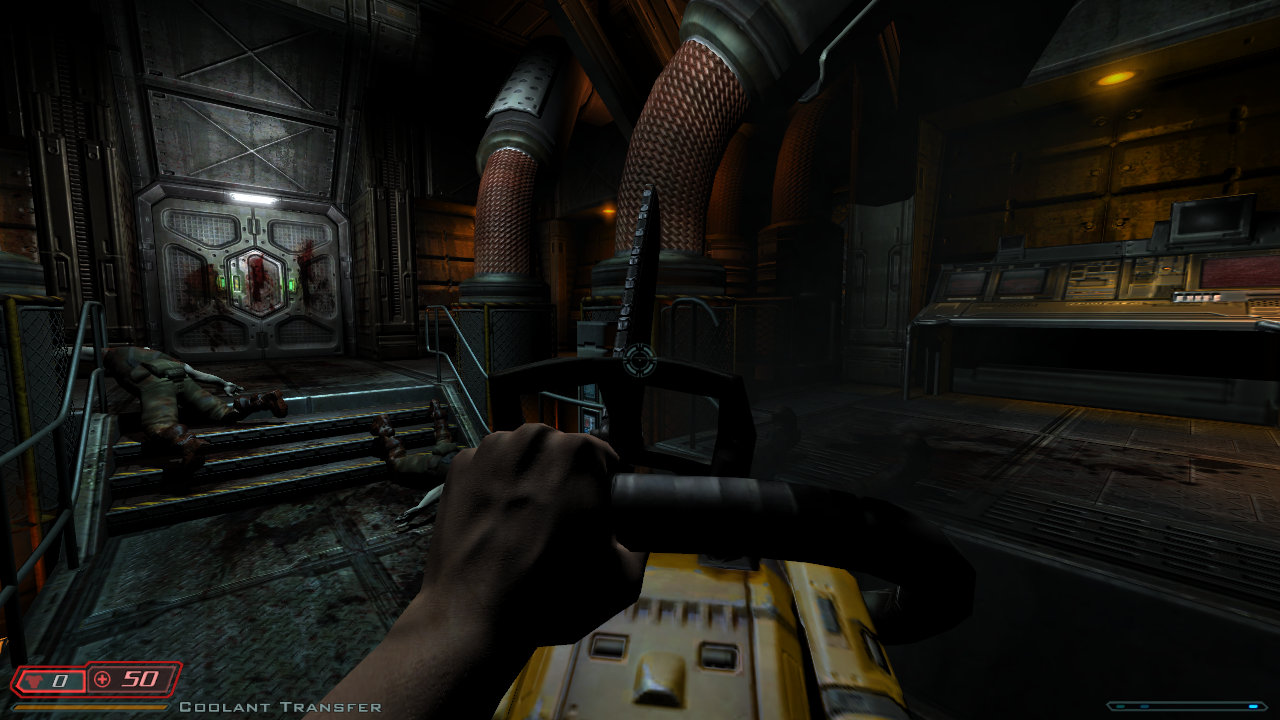 Handheld Flashlight: The classic handheld flashlight from the original Doom 3 is available. 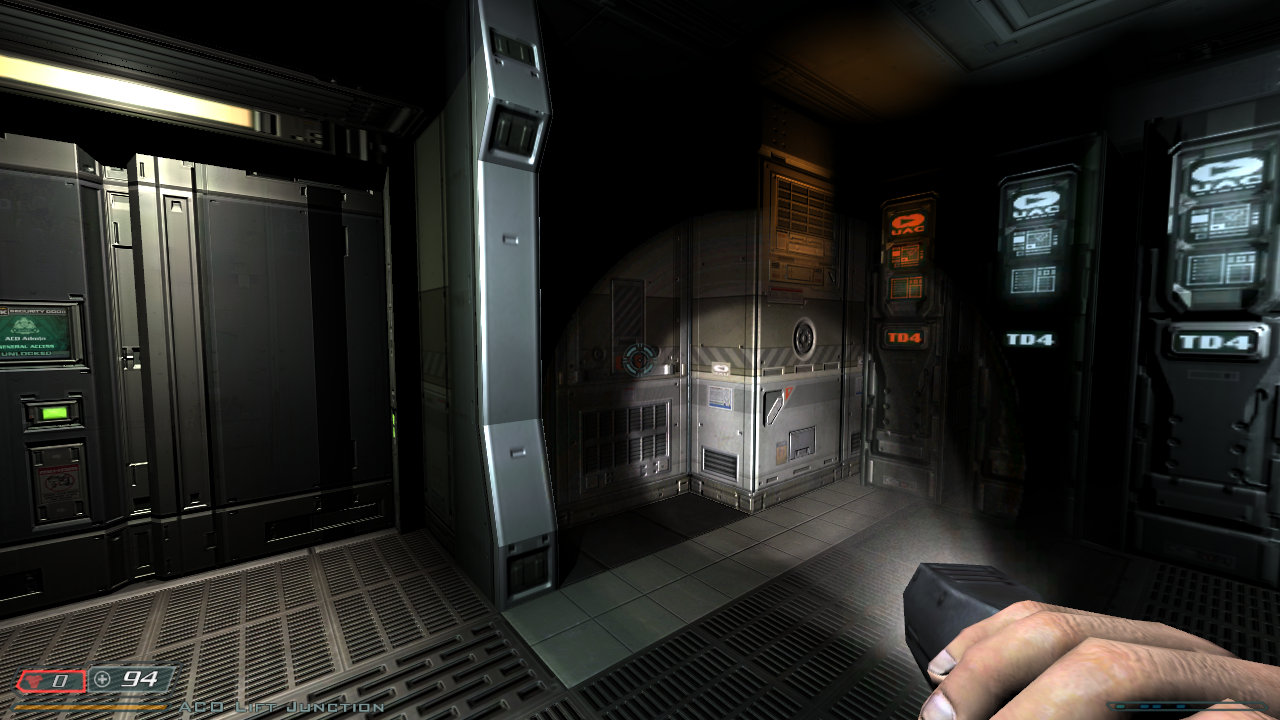 Headlamp: Yet another light option. The new player headlamp is similar to the Armor Mounted Flashlight, but it is view centered and doesn't need batteries. 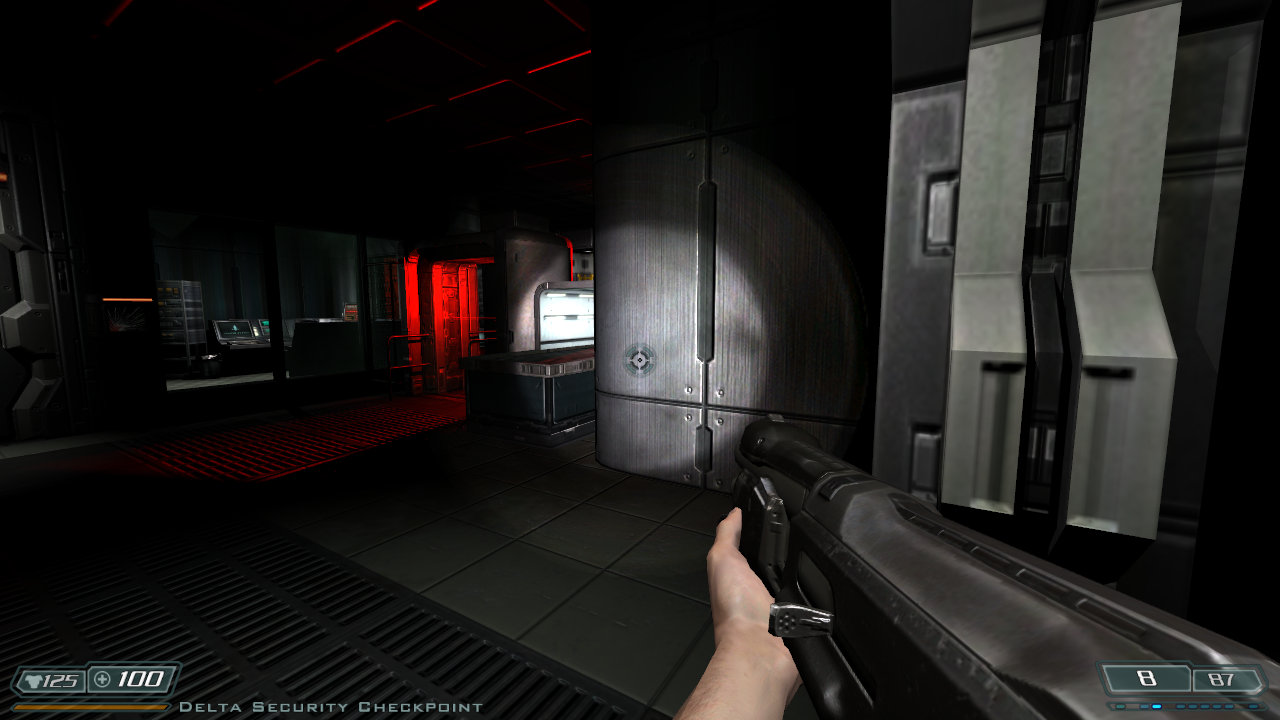 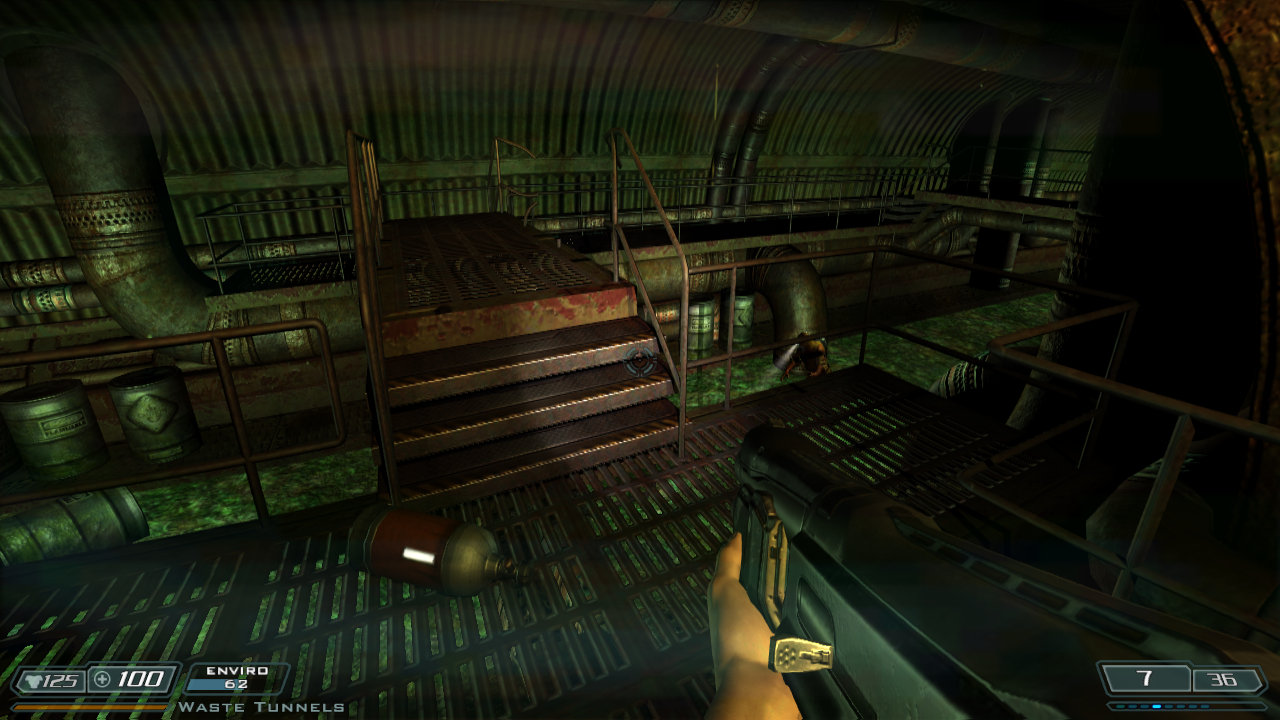 Phasing Effects in Delta X: In the original RoE, the Delta X map (Delta Labs - Unknown) had creepy hell phasing effects. Red lights, smoke, and skeletons would periodically appear and disappear along with a FOV effect and phasing sounds. In the BFG Edition, the whole phasing scheme has been removed. If the "RoE Delta X Phasing" option is enabled, the phasing effects will be present as in the original RoE. Important: When Delta X is entered, this option is evaluated only once, so you must make your choice before reaching this map. 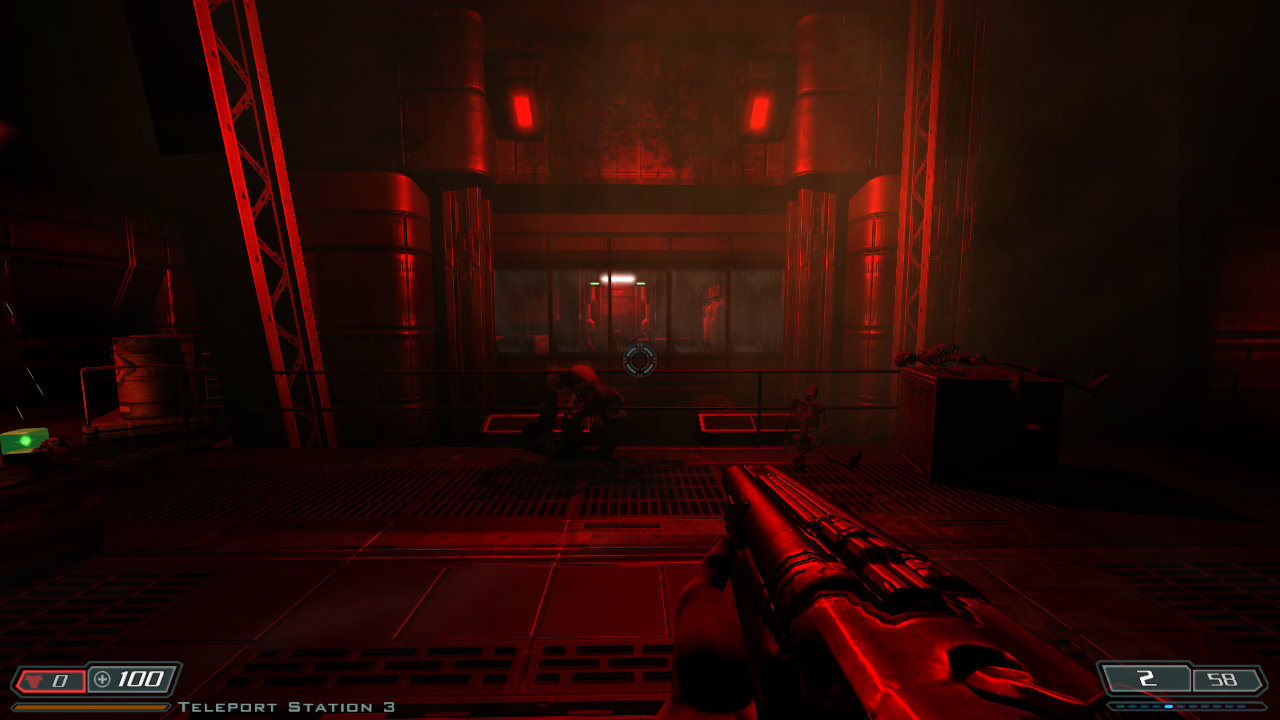 Run, Crouch, Zoom Indicators on HUD: If enabled, an indicator is displayed on the HUD while run/crouch/zoom is active (there is an option for each one). This is particularly useful if you configure these controls as toggles. The indicators can be seen in the image below (lower left). Run is red with ">", crouch is yellow with "-", and zoom is blue with "+". 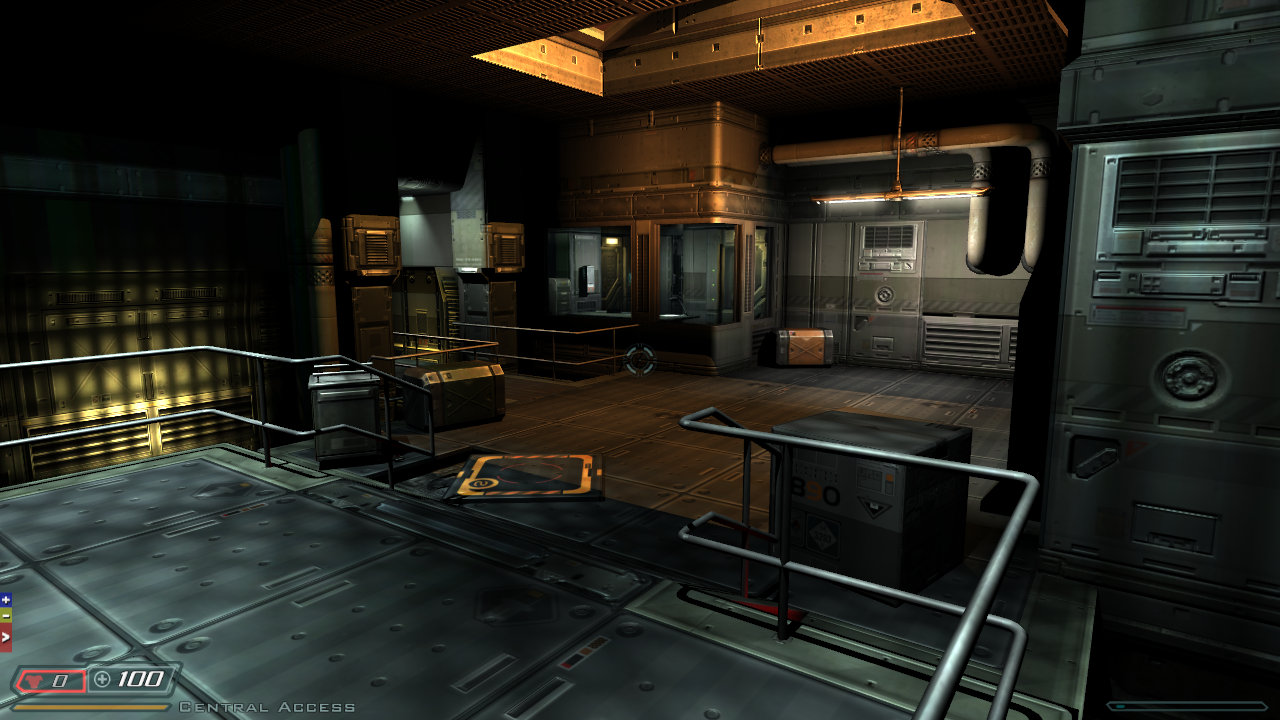 Extended FOV Range: The field of view (FOV) can be adjusted from 80 to 115 in steps of 1 using the menus, and the FOV value is properly stored.

Allow Skip Cinematics: If enabled, cinematics can be skipped by pressing the Esc key.

Shotgun Spread Reduction: If enabled, the Shotgun spread is reduced by half in singleplayer. This makes the Shotgun noticeably more effective.

Grenades Toggle: If enabled, pressing the Grenades key toggles between Grenades and the previous weapon.

Old Ammo: If enabled, the ammo pickups will have the same amount of ammo as in the original Doom 3 (less ammo). There is an option for each campaign (Doom 3, RoE, and LM).

Old Player Speed: If enabled, the player speed will be the same as in the original Doom 3 (slower movement).

Additional Key Layers: The keyboard and mouse keys have additional layers to which controls can be assigned. If you use this feature wisely, all relevant controls will be "right below your fingers", so you will never need to look at the keyboard during gameplay.

Demigod: This is something between god mode and the actual gameplay. When demigod is on, your health and armor levels decrease as usual when taking damage, but your health never drops below 1 (so you never die). Rumors say that you must enter cstDemigod at the console to enable it.

Run Freely: The "Always Run" and "Toggle Run" functionalities are available in singleplayer, and stamina drop can be disabled.

Smoke Toggles: The muzzle smoke of any weapon and the fly smoke of any of their projectiles can be switched off.

And More... Explore the menus and see what else you can find.

A number of features are also available for Doom Classic (Doom and Doom II). Notice that you must use the menus of Doom 3 to configure them.

Re-assignable controls: All controls of Doom Classic, including the automap controls, can be reassigned. The new layer system is also available.

Automap Options: You can adjust the zoom step, zoom speed, and pan speed to be used with the corresponding automap controls, and you can decide if "follow mode" should be enabled automatically when the automap is opened.

Run Options: The "Always Run", "Toggle Run", and "Run Indicator on HUD" options are also available for Doom Classic. These options are independent of those for Doom 3.

Screen Options: The frequent screen flashing in Doom Classic can result in eye strain for some people, so a number of options have been added to help with this. You can decide if the screen flashing/coloring when picking up items, taking damage, or using power-ups affect the whole screen, only the status bar, or are disabled. Weapon muzzle flashes and the screen effect when exiting teleporters can also be disabled. If needed, a brightness option is available too.

New cheats: Rumors say that new cheats can be enabled by entering cstDcDemigod or cstDcGive at the console while playing Doom or Doom II.

The depth-fail method for stencil shadows (aka Carmack's Reverse) is available in CstDoom3-BFG (the related US patent has already expired; see here). This method is enabled by default, so you don't need to configure anything to use it. Compared to the unmodified open source engine by id Software (this one), the visuals remain the same, but you can expect better performance when the view is in shadows.

The achievement system is enabled in CstDoom3-BFG, but for local use only (it isn't related to Steam or any other online service). Since the usage is local, the console restriction has been removed (the achievements can be unlocked even if the console has been used).

The state of each achievement (locked or unlocked) and progress information for each one are shown on the Achievements menu. The Reset Achievements button in this menu can be used to reset all achievements to the Locked state (confirmation is requested twice). 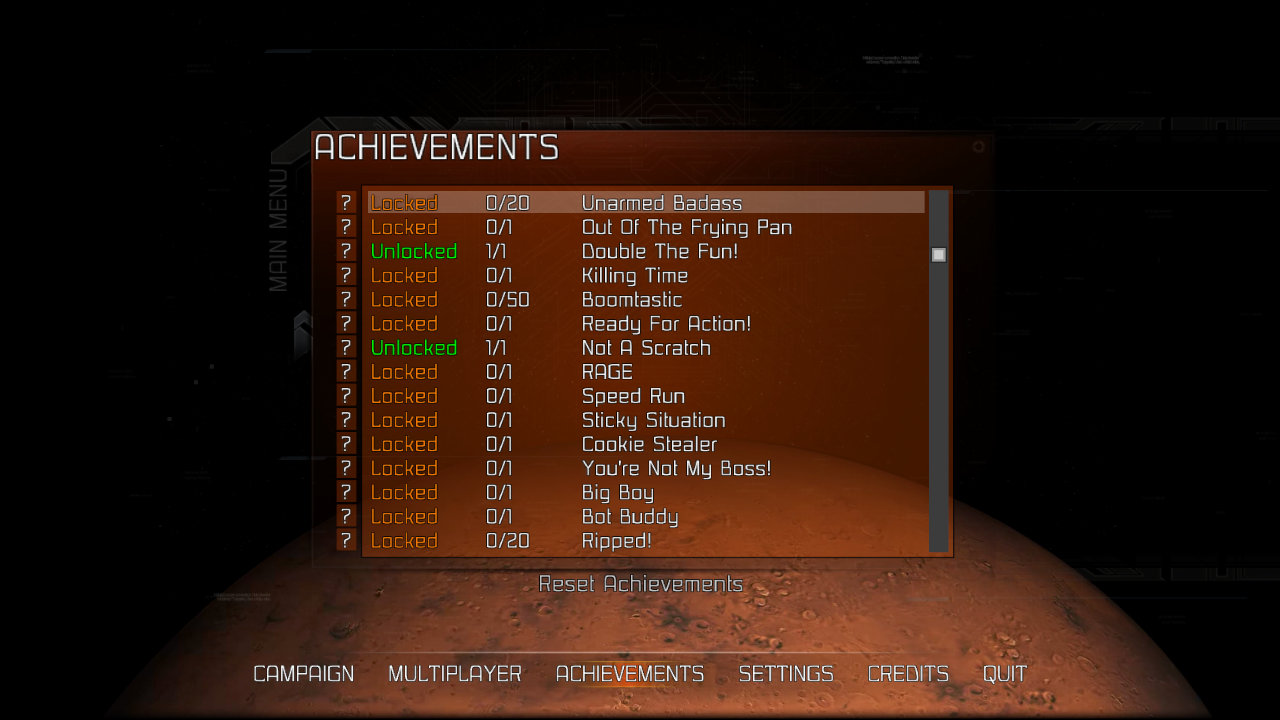 You should also be aware of the following changes:

The Bink videos from Doom 3 BFG Edition need to be converted to another format to be played by CstDoom3-BFG. This is because CstDoom3-BFG supports Theora videos (in a custom container called TH) instead of Bink. A utility to automate the conversion is included. You'll also need the RAD Video Tools (for the conversion only). See the installation instructions in the manual for the details.

Tons of bugs in the BFG Edition have been fixed, some of which are quite unexpected. Here are a few examples:

Besides actual bugs, some bug-like things were also "fixed". Here are a few examples:

For the complete list of modifications, see the included "changes.txt".

This is AWESOME!
This is the *last* thing I saw coming!

Does this mean I can essentially turn BFG into the original game again, except with all the joys of the BFG edition such as higher framerates above 60, better FOV, controller support etc. etc.?

Like, does it revert the ammo pickups to original, and make the lighting the way it originally was and things like that?

As indicated in the article, the mod has options to make many things work as in the original Doom 3 / RoE (like the evirosuit, deltax phasing, flashlight, ammo, player speed, etc.). And yes, all extras of the BFG Edition remain there.

Using the "Light Scale" option in the "Settings > System 1" menu, you can obtain a level of darkness similar to the original Doom 3. The lighting won't be exactly the same, though, as id Software reworked the lights in the maps.

Note: The "Light Scale" option is the same as the "Brightness" option of the unmodded BFG Edition. I renamed it because it affects the actual in-game lights instead of the screen brightness.

The locker code idea is cool but it'd be much better if it worked like the new Deus Ex games, wherein if you have the code then it would come up automatically, so you don't have to search through all your stuff. I imagine this would take a lot of work, though.

Almost everything you mentioned could be achieved quite easily using vanilla Doom 3 or Doom 3 BFG, including FOV and controller support.
The only real advantages with BFG are:
• Slight graphical upgrade
• 120fps
The locker codes appear on the upper-right corner of your HUD when you approach a locker. You just punch in the code that appears in the corner. Couldn't be easier.
Yes you can now change the ammo pick-ups to vanilla Doom 3 style.
It doesn't change the lighting back to vanilla's,
but you can do that yourself in-game with the console, in 10 seconds. Use the commands:
r_lightscale
r_gamma

The code window is automatic. Like naryanrobinson said, it appears on the HUD (top-right corner) when you interact with a cabinet or with other things that need a code. When you look away, the code window disappears automatically too. And remember to enable this feature if you want to use it.

I've read the description and cannot believe it - sounds like dreams come true. Hope it works for Win7 even if unsupported..

One thing I've got to request though:
Is there a way to get the vanilla shotgun sound back again?
The new one sounds like a sudden burst of static white noise.
Has to be one of the worst weapon effects ever made.

No man, there isn't. The Shotgun "wetfire" sounds from the original Doom 3 aren't included in the BFG Edition.

Could I use the file from vanilla to apply it to BFG?
The new one sounds like someone accidentally sneezed into their mic late on a Friday evening and just said, “F*** it, that'll do”, lowered the pitch and uploaded it.