The final version of CSS SCI FI 3: Hardwired has been released. CSS SCI FI 3: Hardwired is a single-player mod for Source featuring 42 unique, replayable missions. CSS SCI FI includes an interactive mission hub and full Configuration Utility which players can use to select different styles of gameplay, ranging from extreme realism to gib-tastic gore. Each mission is goal-oriented and non-linear and can be played and replayed using different tactics, options and strategies. 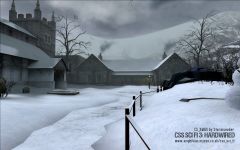 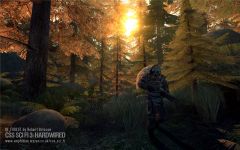 The maps
Missions in CSS SCI FI take place in 18 retail and 24 custom Counter-Strike: Source maps, which are installed intact to the player's CS:S game folder. The maps are unchanged and are fully playable in Counter-Strike: Source. Maps have been carefully selected with the collaboration of established designers, including Bluestrike, Schuzak and d00ds.com.

Replay value
Replay value sets CSS SCI FI apart from other single-player mods. Because the layout of each map is non-linear, there is never only one way to approach a particular target or goal. Players can work through each mission as many times as they like, discovering new features (including hidden secret weapons) and using new options from the configuration utility each time. Resources are distributed differently and enemies change their tactics with every play, making each mission a unique experience. CSS SCI FI brings the unpredictable excitement and high-quality replay value of a multi-player game to the single-player Source audience. 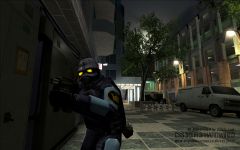 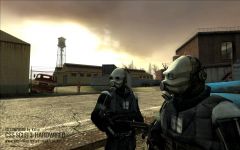 Get it now
To play, only Counter-Strike: Source is required. If it is not already installed, the free Source SDK base will also be downloaded through Steam automatically when the mod is started for the first time.

Download CSS SCI FI 3: Hardwired now via Moddb or get the torrent here.

Erm. If Counter-Strike Source is required, why is this listed as a Half-Life 2 mod? I was excited and it looked cool till I saw that. I don't have CS:S.

I was under the impression that came with Counter Strike Source. At least, the Source SDK does.

And as you say, "To play, only Counter-Strike: Source is required. If it is not already installed, the free Source SDK base will also be downloaded through Steam automatically when the mod is started for the first time." If CSS is required, it would make sense to list it for CSS instead of HL2.

Maibe both games are required to play?

The system requirements for this mod are very clear: all you need is Counter-Strike: Source.

You also need the Source SDK Base, but this is free with CS:S and other Valve games and will be downloaded automatically if it is not already installed.

You cannot run the mod without Counter-Strike: Source.

Which is the point. It requires CS:S and nothing else, but is listed as a Half-Life 2 mod, which is rather misleading. But do as you will, I suppose.

And dammit people, stop voting me down for making valid points. xD

Thats because there is no listing and Valve deals with mods oddly. More accurately, any mod is actually a Source Engine mod + required content. You can own only Day of Defeat Source, but you still get the base engine required for mods to be played on without owning Half Life 2.
However, modders can load content from other games, meaning that you're required to own additional games in order to play the mod. But the way this works is pretty much the exception and its not really worth compensating for, because all you're doing is arguing semantics.

They aren't valid points though, numbnuts. -.-' *Sigh* I understand where you're coming from. But when you say "If CSS is required, it would make sense to list it for CSS instead of HL2." BUT You're wrong however, as it is NOT A MODIFICATION OF COUNTER-STRIKE: SOURCE! It's a modification of Half-Life 2 WITH CS:S Content and maps. Seriously...think next time mate.

Ditto.I'm not a CS man myself and don't have CS:S. Shame.

Because it's not a CSS mod.
It only uses content from CSS.

It's worth it.In conjunction with this mod,it's a two for one deal.Plus,you may as well have all the available Source(s) if your playing a lot of mods.Widens the field,so to speak.

I Bought CS:S just because of all the mods that requires it

i bought all my other source games for that reason.

i'm a bit bored of that things

I didn't buy CSS. It came free with my copy of half life 2.

i bought CS:S because its an enjoyable game?

I agree. Furthermore, all maps used by this mod, including the custom maps, are ready to play unmodified in Counter-Strike: Source, online or locally against bots.

Three ways to play for the price of one installation!

7 comments on this mod and none of them are about the actual game?

Anyway, I think it's a great game. I like how it plays out in missions so it's easy to get in and out of at any time. A job well done! :)

I remember playing the early version of this.

It's basically Smod but at CSS maps and such. The gameplay simply feels like a combine kill-fest. There are missions in each map, but they are far too simple for significance. Kill all the soldiers, destroy 3 APCs, find 2 glowing turtles (I assume they were bombs). None of this really enhances the experience.

It's still on the ORIGINAL version of Source. HDR isn't truly supported as this mod still uses the artificial bloom and exposure method it introduced in the original. There are many things that are simply too outdated and the mod provided nothing new. All I did for an hour was kill combine with a pistol or an SMG, or a portable Airbot turret. There's more weapons, but if I were to pick up another mod of SMOD, I would just get SMOD: Tactical.

The only intriguing part I found in this game was the mission hub. The level specifically designed to visualize choosing missions and such. It's a unique foundation, but the actual missions that support it undermine the entire thing.

it is much more than just Smod, i havent seen such polished quality before in modding, there is an endless amount of missions, really a great mod, the best Smod up to date, well the most original one.

The mission hub was awesome, I like the head bobbing also. :D Very fun to play. Best smod in my opinion.

So what happens if I dont have CSS? The game just wont show up on the list?

Do not try to run this mod without Counter-Strike: Source installed. There will be no maps and most textures will be missing.

Hm... Airboat Gun in third mission made my game crash... Other than that, great mod. Feels like playing those faked GMod missions, only without an hour of setting up enemies XD

Nevermind, seems like just a general crash. Probably my settings.

The patch for this issue is here: Moddb.com

Just to be clear: TF2 will not help. This mod requires Counter-Strike: Source. There is no alternative.

Every time I try to start up the mod, it'll start to load the menu, then it crashes with the "hl2.exe isn't working" response. This doesn't happen with any of my other games.

Please follow these recommendations: Supportwiki.steampowered.com and see if that helps.

I'm sorry, but none of the fixes listed helped, and I've tried opening all my steam games again, just to be sure if they work right or not, and they all worked just fine except for CSS Hardwired. Maybe its just my computer, it usually causes all the problems with stuff like this...

oh damn, been awaiting this mod for EVER

Great Mod, i loved the counter-stike-esque mechanics with the half-life-ish gameplay. Alotugh the missions are repetitive, they are fun to play, some of them are really tough also.

i really liked the configuration utility, gives you great freedom on customizing the mod.

also, some custom are really good to play on cs:s

i would love to see a new version with 4 player co-op, so you can play with your friends instead of NPCs. That would be awesome

ps: can you change the description on the mod? it's a cs:s mod not a hl2 mod, and for the people bitching about not having cs:s and not being able to play this great mod just buy the freaking game

Thanks for your comments. Coop will not be added to the mod. You might like Synergy Store.steampowered.com if that's the type of gameplay you are looking for. Also: the mod description does not need changing - as has been repeatedly stated, this mod runs on the Source SDK Base ( Developer.valvesoftware.com ) but draws content from CS:S. Moddb therefore classifies this as a HL2 mod, when in fact most mods run on a combination of one of the base engines and other content, as stated in the technical note at the top of the page here: Moddb.com .

Also: it's cool you've played some of the maps in CS:S - it's one of the great strengths of the Source/Steam system that two games can be run from the same custom content.

I've been getting a strange error with this mod. I'm trying to play through the first campaign, and after i beat cs_compound, the game goes to the loading screen, loads about 6 bars or so, and then hl2.exe stops responding, and i cannot resume the campaign... Is this a known issue/bug that others are experiencing, or just me? Is there a patch for this?

The dust maps have been updated by valve, and are no longer compatible with the engine upon which this mod is based (Source 2006). I will release a solution when one is found, but for now campaign 1 cannot be completed. Campaigns 2 and 3 are fine, however.

Okay, the patch for this issue is now available here: Moddb.com