After some longer period of silence, we are bringing new update which is official start of new Contra, as we call it Contra X!

We have made a lot of changes so far, but more interesting are always visual ones. As usual we were waiting for more of them to gather up, but we decided to not to follow this practice anymore.
This means, we will post more frequent updates, even if they are only related to one single picture.

Few new eye candy stuff which are made. 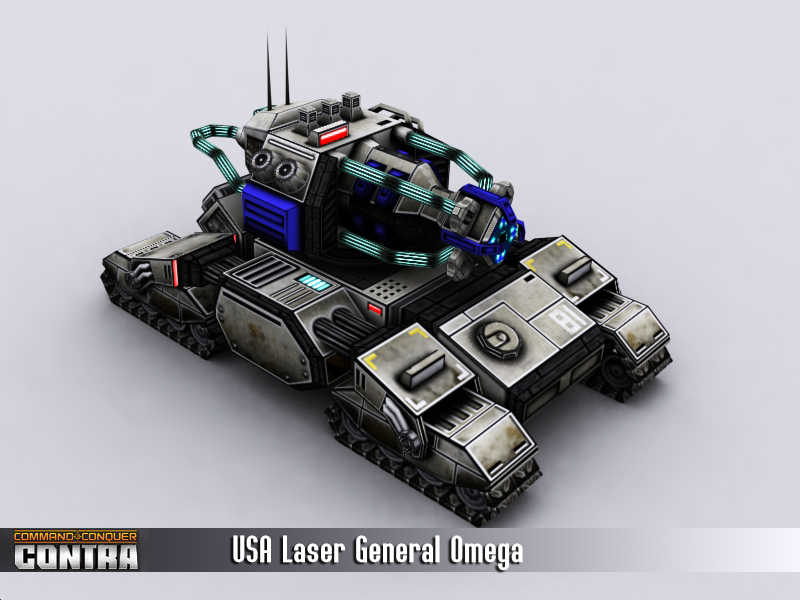 Laser generals super unit Omega got complete makeover, as this unit left as probably the oldest super unit it was about time to match him with other high quality units. He got what he deserved! 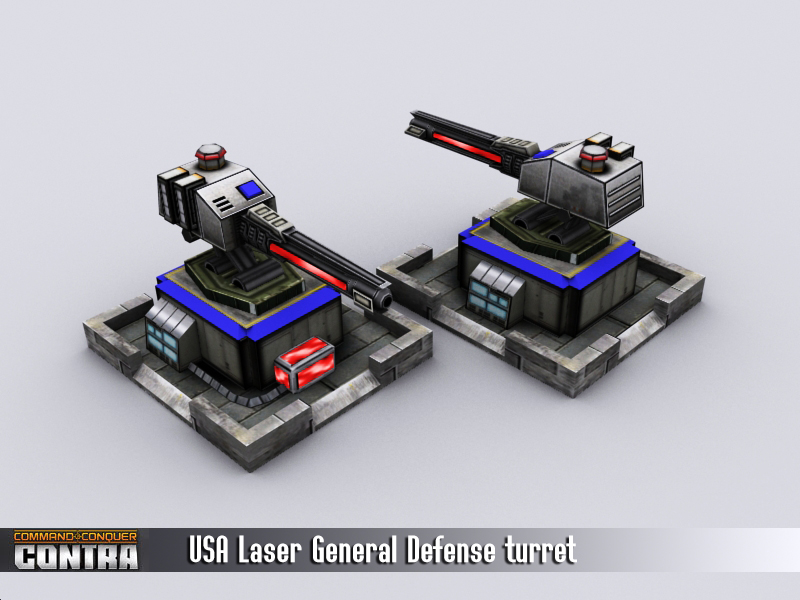 Similar story is with laser defense turret. Even tho old model was good, it didn't fit USA scheme. 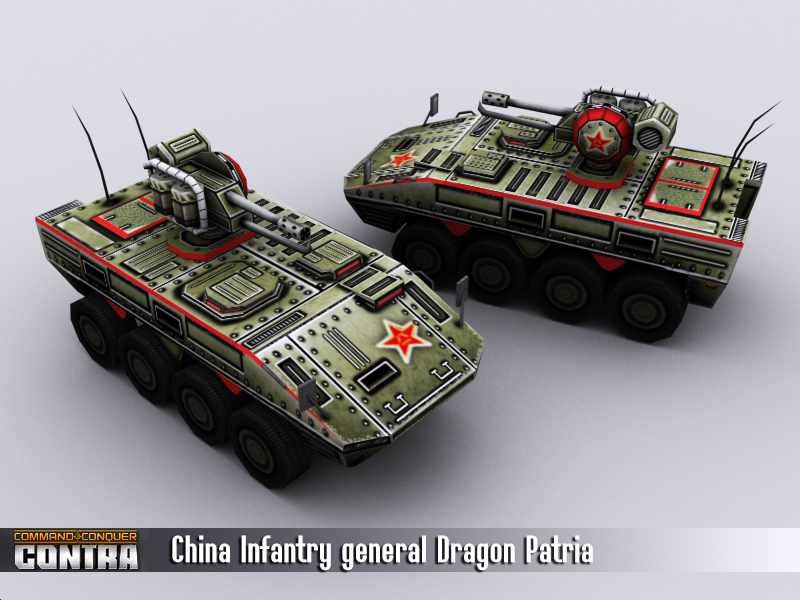 Some artwork for infantry general which also affects gameplay. We removed old Dragon wheeled unit which was really bad looking, and also didn't fit the gameplay. Now Patria based units got new member with flamethrower. 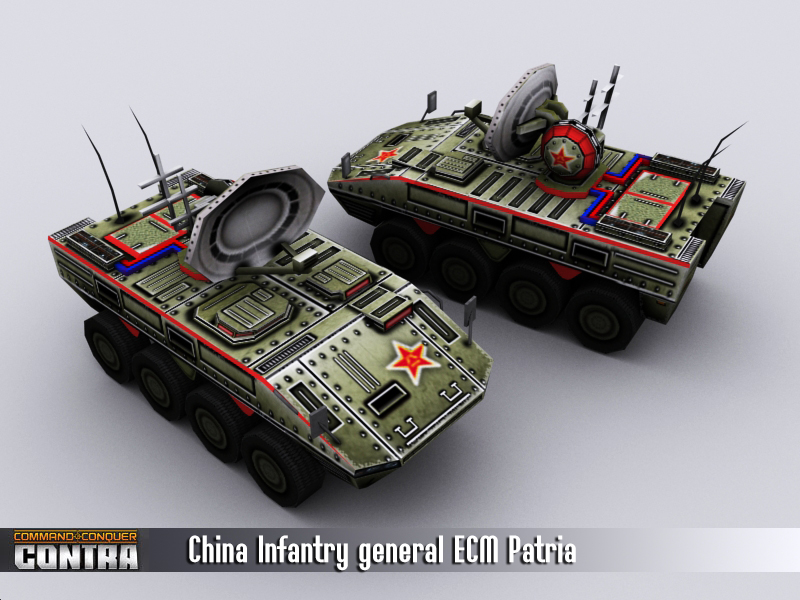 Yes, we already had ECM Patria before, now we decided to bring him once more. The reason behind this comeback is the fact that Patria vehicles got through lot of balance changes to the point where replacing current ECM unit with Patria based one doesn't affect gameplay in a bad way (well, there are still tests left to do). 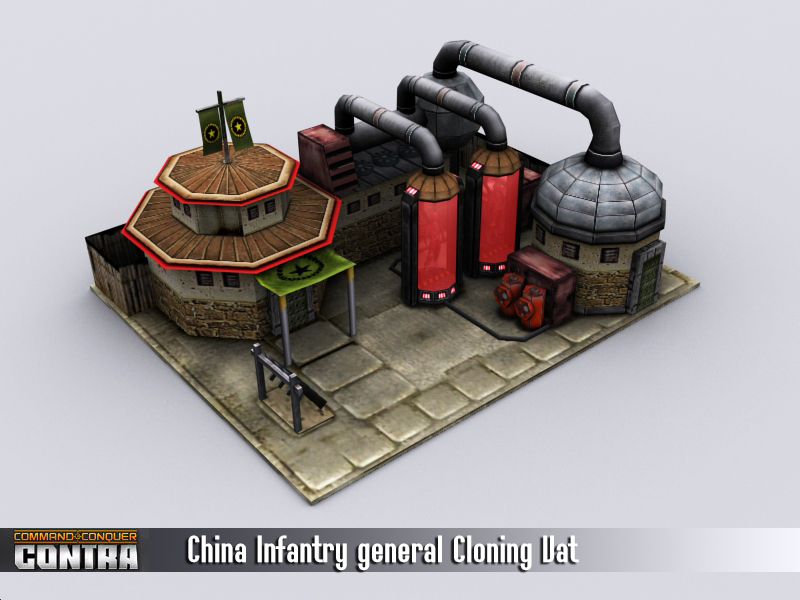 The brand new thing for China Infantry general is Cloning Vat (yes, you got that right Yuri). This was planned for a long time, and now is finally realized. China Infantry General has special structure (as all generals have, or will have 'till the end). This structure has doubled stats from Barracks (cost, build time, and power consumption) but it also gives you clones production. You are now able to produce original soldier and its clone for a price and build time of normal soldier. So, instead of one Tank Hunter, you will get two for the same price and build time. This change will help Infantry general to utilize infantry units even more.
And yes, those are clones in tubes. 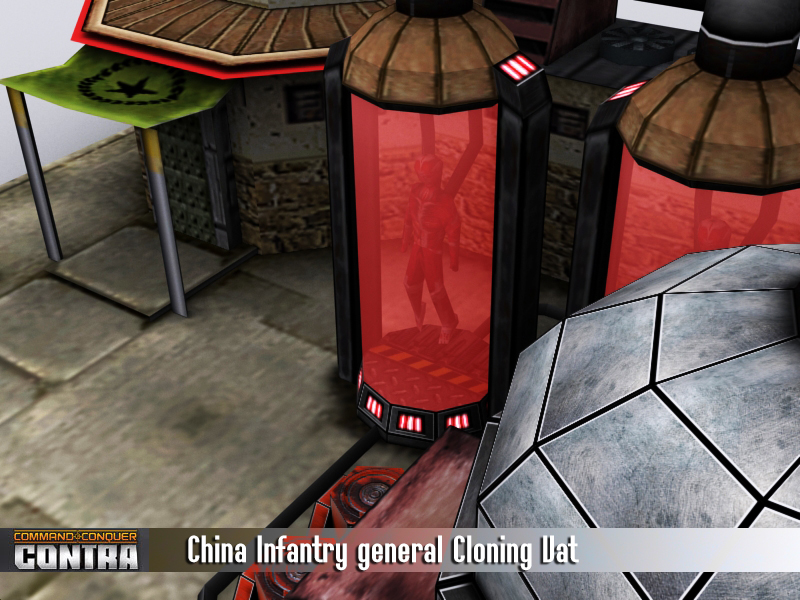 At the end, we surely want to tell you that new HD game GUI is in progress thanks to their original creators and our team which will adapt it to Contra. But more of that in next updates.

Also, thank you all for your support, we really appreciate that!

Please tell me)
If you decide to affect the infantry general of China, can you reconsider such a unit as a mobile fortress ??
She is weak in my opinion, she can be destroyed by ordinary soldiers of the thrux, knocking out everything from there, and she does not have any countermeasures in this case, the armor is not so strong, if it can be compared with Saturn (Superweapon), then Saturn at least leads fire on air targets, and the infantry chpokayet with a bang, of course, this is a different general, and so on, but still, at least a couple of auxiliary guns to add a fortress would not be superfluous, I think))))
Or how to increase its survivability?

Yes, 2 turrets are planned to be added to Infantry Superunit. But not strong one, just something to be used when there are no infantry units inside.

Ooh, a new update. It is look very good, especially unit reskin and new stuff (maybe), including the cloning vat itself which is good implementation for infantry general as infantries is one of his best arsenal yet (I know it is similar to RA2 YR cloning vat mechanism).

By the way, good news highlight, Contra Team. I can't wait to see what's inside on the new Contra X update soon. Keep it up!

this make it more futuristic!!

This is like the best mod ever made. goodluck!

Do flamethrower crawler have resistance against RPG damage?

can u make the long range turret for laser general mortar type..
cause if its blocked by other turret it wont hit..
and also can u add some mortar turret on general flame?
and the sniper tank on tank generals is kinda weird cause if he attack he need to move a little to hit again..
like the nuke canon
and if possible can you add propaganda effect on the heavy air tank..
like the overlord type..
that will be nice..

I hope the long plane carrying the robots will be returned... because it was of great value to this army.....
I wish you success.. and thank you

will the toxin tunnels and some previous gla defenses make a return ?
also a strategy center for gla boss where he could choose one of the four gla generals tactics like cybernetics protocols would be cool :)
thanks you for all your hard works and attention to details.

I do hope that the Chinese Boss General gets her own Super Unit.

That is so nice.
but i'm sad that Contra 009 dont have any extra music pack.
please make music packs for it. and also for contra x.
thx a lot... 😍

will the vanilla factions return in the next update? i feel kinda weird seeing only sub-factions without any vanilla/normal fations

Very unlikely. Contra was designed to have only sub-factions playable.

It's also impossible due to modding limitations.

When will the contra X be ready?

Hello once again. I noticed that AI is really bad in contra 009, half of generals don’t build 3rd rank buildings and units,as u can understand he also doesn’t build rank 5 units and buildings, even after 30 minutes of game. Contra 007 AI is wayyy better. In contra 009 only few AI generals are good and even overpowered : Nuclear, Air forces . Please fix this it’s boring to play skirmish

If it comes, let me know.

Please consider to enable back building sell function and let China Nuclear General have defense building, and also let other factions than USA to able to build aircraft on 0 tech level. Overall this mod is good and this is one of my favorite mods for Zero Hour.

Greetings to every one! Please tell me, in the map editor in a multiplayer game, such a tool as "Teams" does not work, as well as all the scripts associated with them, so will the editor be updated? In my humble opinion, it would be great to create co-op mission maps. Of course, you can do without "Teams", but this narrows down the possibilities for developing interesting joint missions.

It would be very important to see the differenz from some units more easier like the motorbikes and cybertanks and some others who looks like same.
That makes the gameplay more easier.

Welcome
back again
I have a comment on mod 009 contra
I noticed that the hard level is more difficult than the insane level
I think it's a big mistake that needs to be fixed
I noticed that it's insane when I destroy a building that they never rebuild, in addition, their army and defenses are very, very weak.
I hope they find a solution to this problem in the next versions