Christmas is done, New Year's Eve is done and exams are finally over.

Time to show some more stuff. 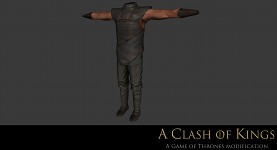 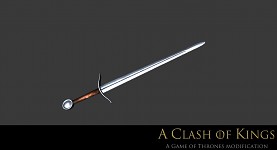 A Clash of Kings 2.0 has been in beta for about a month now, and it's yielded a great amount of bug reports from the various testers. Those reports have dried up now, which means I can finally start work on some of the more fun aspects of the modification: Quests and items.

Quests are the usual thing - visit maesters and search for forgotten books, get in arguments with septons and so on. And oh yeah, in 2.0 Melisandre offers a quest to assasinate Renly Baratheon. All for the greater good and the Lord of Light. 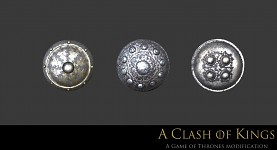 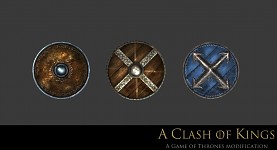 Items are something which I constantly change, depending on needs, current taste, lore information and so on. But also to keep the modification looking as pretty as possible. One of the drawbacks to Mount and Blade: Warband is that it's not, well, pretty. Some of the static props, especially, are sub-par.

But we've been running a Paypal and a Patreon account for some time now, and a lot of people have generously donated money to those accounts. The purpose of them is to commision graphical works from talented people in the community, so we might have Unsullied that look proper bad-ass, and that we might make a collection of use-able props and items to be used both for this modification, but are also of such high quality that we can use it for Bannerlord.

A Clash of Kings 2.0 contains a few new items, but hundreds of new props, both to replace some of those currently in which look less than stellar, but also props which fill a need when we're making scenes like, as an example, The Alchemist's Guild of King's Landing - they're also known as the Pyromancers. 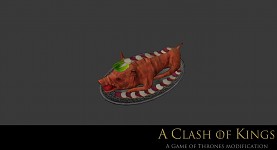 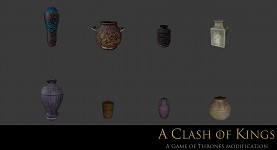 To continue adding awesome new items and props to A Clash of Kings, we need more donations. So if you feel inclined to do so, you can always donate towards the work on these two sites:

Donate through paypal (button is on the buttom of the first post): Forums.taleworlds.com

Thanks for the update Cozur, looks like you commissioned good stuff.

of course it will. you need new computer. :P

the game engine of warband is limited but with bannerlord comming soon with a new engine what they alredy make that cant be in the warband mod will be in the bannerlord version mod...:)

By soon he of course means 22 years. I think ill be more interested in other games. Like elder scrolls 18.

you're damn right about this

cant wait for the next update

I'll get to kill Renly O.O What happens to the Stormlands then?

I don't mean to bother you all, but how many months does it take for an update to be released?

Cozur has done a heap of updates for this mod, it isn't fair that people start jumping on him the second an update takes a little longer than usual.

I actually mean how long does it USUALLY take for an update to be released. I'm not jumping on Cozur, I'm just asking so I can have a good sense of when to expect the new version to be released.

sorry i ment to reply to the guy below.

Cozur will we see any new content with the Knights watch and the Wall in 2.0?

when will the new update come out aporx +- ?

Guys. Cmon. Do you really want cozur to rush this update, then complain about a bunch of bugs because you ****** RUSHED HIM?! Give the man his time, and he will give us the most badass update in the history of this mod.

At this point we went a whole month with no news...

Cmon, where is the update?.

Ooh btw. This really needs to change:
When you conquer an enemy lord and he escapes. He will return in almost full force in like 2 minutes. Thats wayyyy to short. If you defeat an enemy lord, it should take like 10 minutes to get back to like 100 troops. What is mostly happening as marshall now is that you conquer an enemy castle, leave 100 troops in it and tell ur lords to go to the castle. You leave for taking over another castle and the previous castle already gets besieged (by somethimes even the same lords from who you conquered it). So you need to go back whole time.

I have spend 3hours with the Westerlands trying to capture 3 normal castles of the Reach and trying to keep them. In the end, I only succeeded in keeping 1 castle, allthough I defeated all the armys I met......

I think its fast because they are just going back to another castle and taking out more troops.

When you defeat an enemy lord on native it takes time for their army to grow again. But here their army grows way to fast :(

Hello
I went to Ninestars to join the Tourney, i saved a game when in the citadel, then attached the noble and got jailed. In Jail i saved in another slot to avoid problems, watched the trial without demanding the trial by combat and got flogged bloody. Exited the game without saving, to check what would happen if i chose the trial by combat option and realised that i still have the active quest, but i cannot access the location anymore. In fact when trying to approach ninestars i get the description and then only the option to "leave".
Please tell me there's a way to gp back or to add the option to rejoin the location as i only have these two savegames!!!

Savegame 1: before fighting the nble
Savegame 2: in jail
They both take me out of ninestars, but won't let me access the town.
HEEEELPP

Ninestars is only in the quest, it's not there permanently. It's like Castle Black

I know I've said a lot on here but thats because I'm having a hard time playing warband at all so I feel like I need this to play. Just a little bit of news would keep me happy.