The new entry in the Complete series from the studio that brought you the celebrated STALKER Complete 2009 mod. 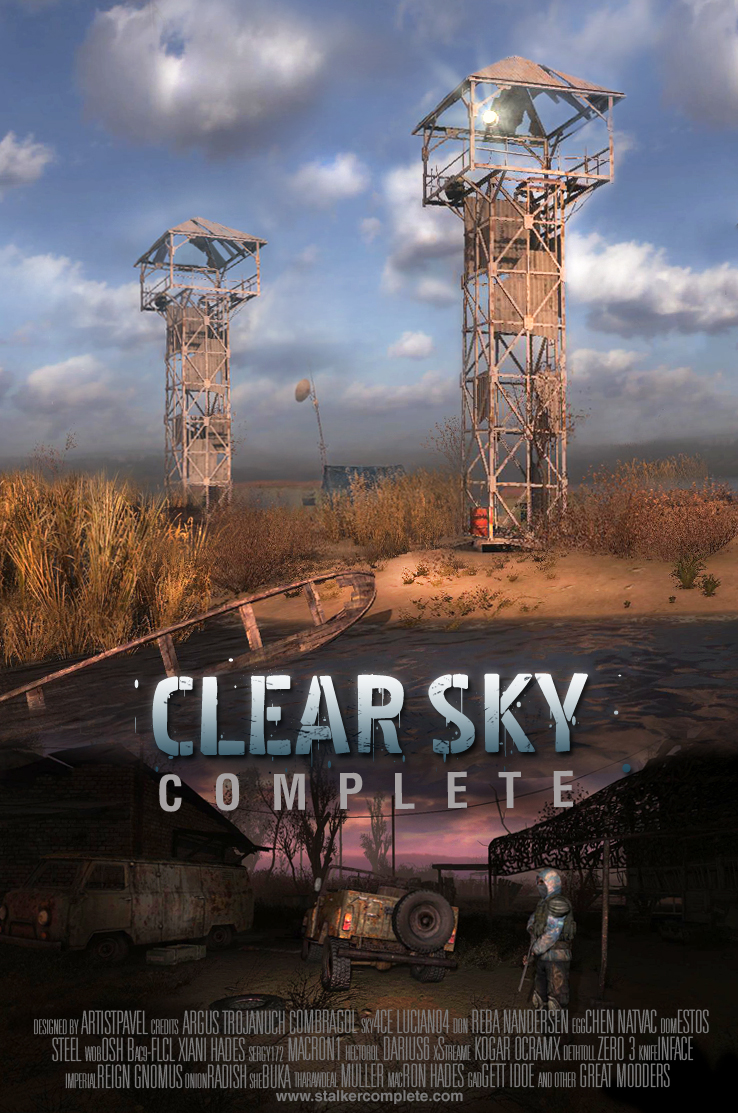 Clear Sky Complete is a part of the Complete mod collection, which is a series of modifications created by professional artists dedicated to enhancing the S.T.A.L.K.E.R. games. The Complete mods focus on improving the original game’s graphics, sound, and atmosphere, while preserving its core elements.

Built upon the success of STALKER Complete 2009 (which was downloaded well over 200,000 times), this entry in the Complete collection continues the tradition of aesthetically updating the game without changing the original story or gameplay. Fans can expect a polished and pure Zone experience designed around the most graphically demanding title of the S.T.A.L.K.E.R series - S.T.A.L.K.E.R. Clear Sky.

This mod debuts the brad new weather system created by our studio specifically for this title and is entirely different from the work we've done before.

S.T.A.L.K.E.R. Clear Sky is a graphically improved prequel that integrates newer visual technology that we introduced in our previous mod for S.T.A.L.K.E.R. Shadow of Chernobyl. This gave us a solid foundation for further enhancements, letting us focus solely on the design elements of the games' art style and aesthetics.

The most notable feature is the introduction of the brand new set of distant scenery textures that put the player in the middle of a large open world, rather than the previously "enclosed" map. The original photographs used in this project were captured by our studio during our travels to the Russian industrial town of Mednogorsk, which represents how Pripyat once was. Once we returned to the studio we applied our graphic design expertise to edit our real-life environment captures to closely match the fictional in-game Zone environment.

S.T.A.L.K.E.R. Clear Sky features improved textures compared to S.T.A.L.K.E.R. Shadow of Chernobyl, however there was still a lot of room for refinement. Instead doing a total retexture, we only needed to replace select sets with respect to game designer's vision. This new texture set contains the best work by the community along with the introduction of new rendering techniques authored by our studio, such as:

The purpose of this sound overhaul was to further enhance the ambience and atmosphere of the Zone with the addition of higher quality and more realistic ambient audio files. Each map now includes a sound theme that varies between night and day. All this has been integrated without diminishing the original sounds unique to Clear Sky, ensuring a superior audio experience. All weapon sounds have been replaced with comprehensive analogues, and footsteps, bullet impacts, anomalies, creatures, and many other sound categories have been improved.

This mod introduces nearly a hundred acoustic guitar and vocal songs. They have been added to campfire music sets, and are unique to each faction. This live music was recorded specifically for this game, creating an unforgettable ambience. Also, some new and familiar music tracks can be heard on the radio and megaphones throughout the Zone. However, this mod doesn't modify the dynamic combat music, which can still be turned on and off in the game options.

Bug fixes are the specialty of the Sky Reclamation Project, a community patch which brings the joint effort of a large number of community members together to address bugs still present in Clear Sky after its final patch, and eliminates many game breaking issues. This mod is included in Clear Sky Complete, and features:

Note: this mod doesn't fix all bugs, but there are significantly less of them.

Various tweaks have been implemented in Clear Sky Complete to create a more fluid experience for a player and to maintain continuity with other games in the S.T.A.L.K.E.R. series. Noticeable tweaks include: 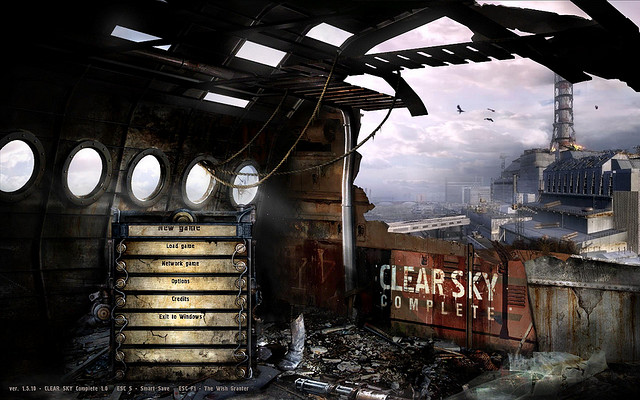 With the new user interface update you no longer have to skip through introductory movies. Also, the HUD colors have been muted so they don't distract and the inventory window is now semi-transparent, which allows the player to view the weapon currently being equipped. Also, the ESC+S shortcut from Stalker Complete 2009 is added, which works like a "smart quick-save" creating a separate save file with level name, in-game date, and time each time it's used. 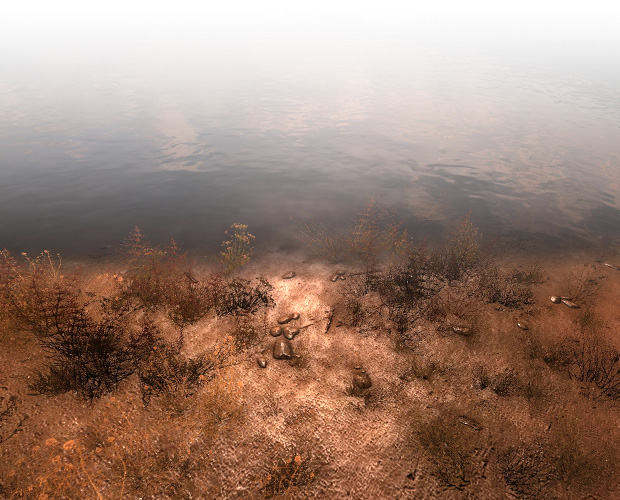 Looks good but I only have SoC and CoP :/

Don't feel bad about it. Clear Sky is by far the worst of the three. With this mod though, I might just reinstall Clear Sky and give it another try.

Yes, check out the main page, there's a screenshot of 2 cars in the swamps.

I'd also like to say, it's amazing how you do your updates. Very professional and pleasing. I think that's something missing in a lot of mods, and it's appreciated. Thank you. :)

Bug fixes, maybe that will allow me to play Clear Sky! And a lot of other improvements.. nice, downloading!

No changes to the faction system? Bummer.
Any possibility of adding a feature to reset your status with a certain faction?

Lovely. I shall try once I finish the game, sans any mods.

So are you gonna to the same with Call of Prypiat ???

This is a great mod, but when I get to Limansk the game closed without any error. help?

This is fantastic ! I've been waiting for a proper reason to play CS again. Beautiful work to all involved !

Does this do anything about the irritating machine gun in Cordon?

Everyone hates that thing ! You can only really time your moves well and run like hell. Personally, I like to attack the Military's base a bit later on ( and then take out that damned gun ).

Hold on, I'm working on a new patch to address stability, the minigunner will be adjusted too.

Hey pavel. I was playing CS complete and noticed a pretty funny bug. With the Clear Sky CS-1 armor (heavy) upgraded, you have unlimited stamina unless you are overencumbered. Otherwise, you made me remeber why I love STALKER.

(moved from your profile to see if anyone else noticed this)

It does not. there is another mod though that does adjust the accuracy.

Once you install the mod, make sure you get the 1.1.2 patch: Moddb.com

this is EPIC! THX!

Thx, This mod is awesome.

Does this Mod do anything about the Emissions? Can you hide in more than one safe zone like in Call of Pripyat or Oblivion Lost 2.2?

Mine crashes right at the beginning 2-3 secs after intro.What are the minimum specs u need to run this mod?

Update the game to version 1.5.10, same specs as original game.

"The most notable feature is the introduction of the brand new set of distant scenery textures that put the player in the middle of a large open world, rather than the previously "enclosed" map" This like is disturbing, I thought you were talking about finally putting all the sectors in one huge open world.

Trust me, it takes a lot more skills to do skyboxes well, than adding levels.

How do you intall this?

Does this let you aim pistols as well?

Hello. Love the mod. It has allowed me to replay Clear Sky and have much more fun :). However I have encountered a problem. In Limansk just before the Bandit ambush, I save the game (F5 or ESC+S). If I die and reload that save it crashes to desktop. I have deleted the file to be sure it was not corrupt, and it has no problem loading from the auto save. What can be the issue? Thanks.

freeplay?i mean after a last mission when u must kill a Strelok

Does this have freeplay?

How do you use teleport? Is it available from the Wish Granter?

can anyone teach me how to allow npc to equip items I sell them
edit the file m_stalker.ltx in the creatures directory

it`s not work in clear sky base

how to do that in stalker complete 2009

please anyone can answer thank you very much