Claustrophobia's development resumes, and I discuss the key design changes which will be shaping the game over the next few updates. It's great to be back!

Hello everyone! My exams are now (finally) over, and I can return to Claustrophobia development. If all goes according to plan, I will have more time than every before to work on the game, so updates should be returning to the normal schedule soon. Of course, the first patch will not be straight away, as I haven't had time to work on it yet. However, I'm going to use this news article to talk about the changes that will be coming into place over the next few updates. Many of these features are purely designs and not implemented systems, but I think they are important to share now before I completely commit to the changes. So treat this post more as a preview of the ideas currently floating around in my head.

So as you all know, the last major patch introduced a nicer, more user friendly UI, which was met with good feedback. Of course, it had it's teething issues, so some further changes have taken place. 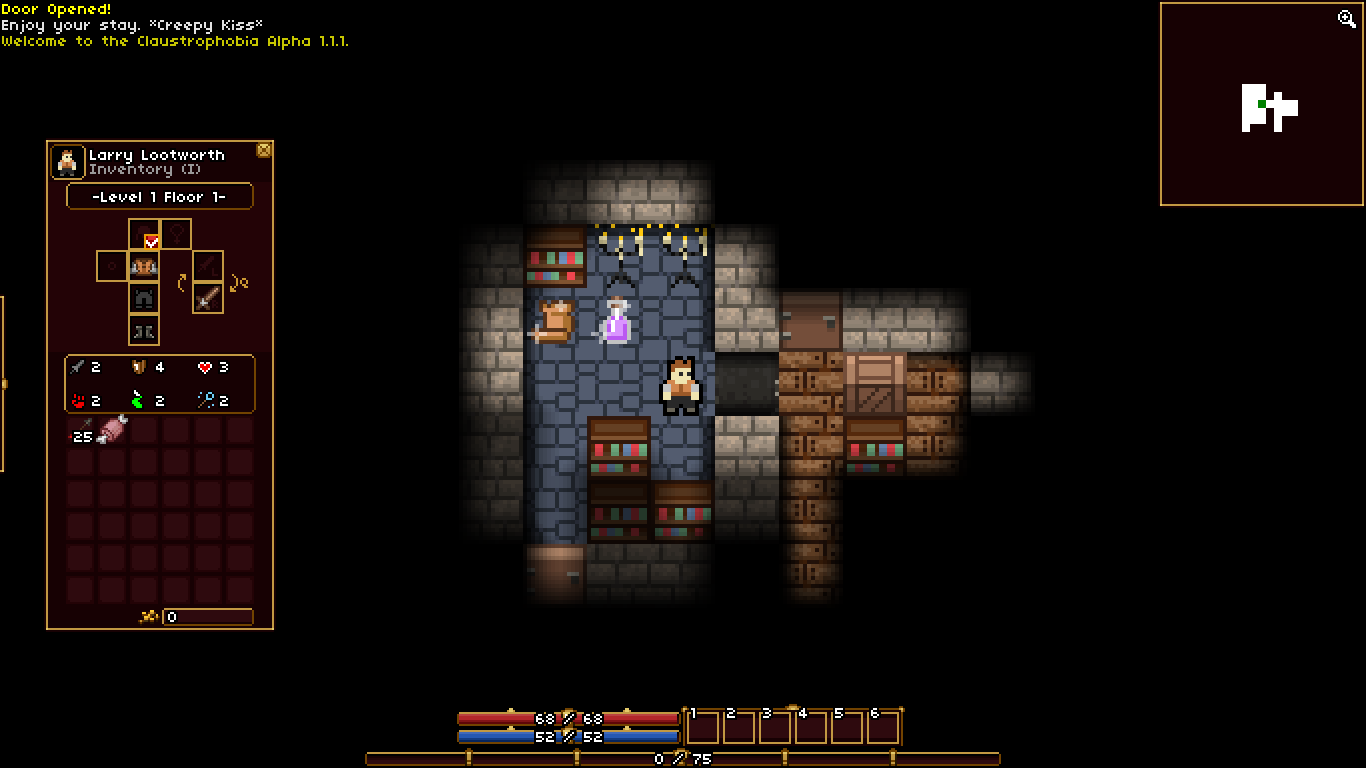 Most noticeable of all is that the inventory and character equipment/stats window have merged to become one single Inventory panel. While two separate windows allowed a little more customization of the UI layout, separating the inventory from the equipment panel meant that when highlighting gear in the inventory, it was not immediately apparent what gear changed which stats, without opening the other panel. Having windows which share functionality, but can be closed separately from each other is generally a bad design choice.
Secondly, the small panel underneath the map, which displayed your level, the floor you were on, and your gold, has been removed, and that information can also be found in the Inventory panel. This is a purely aesthetic change: the panel just didn't look good where it was.

Finally, a number of people were having difficulty judging their vital statistics in the lower bars. The bar graphics have been cleaned up to remove unnecessary details, and the numbers which show the stat next to it's maximum value have been changed to only display while the mouse is hovering over the UI.

Crafting will be changing, but not just in appearance. The previous crafting system, which required arranging items into specific crafting positions, will be replaced by a system which is both easier to use, and allows for more item recipes to be created. Below, you can see a mock up of this new system: 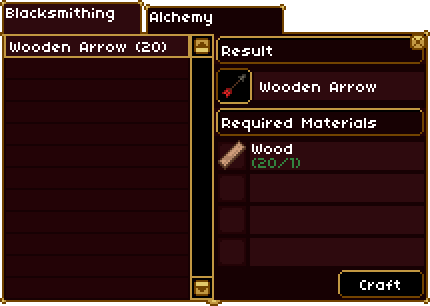 The left hand panel will contain the items you know how to craft, and the right hand panel the materials and quantities needed to craft it. This makes it much more obvious as to how many of an item you can create, as well as precisely what materials you need more of, and will help new players get into crafting quicker. New recipes will be discovered as you level your character up (it will no longer be tied to a separate crafting level), and in the case of potions, discovered by drinking the corresponding potion type.

Before you panic, I'm not about to waste time redesigning all the skills again! I'm happy with the skill sets, but I am not happy with how you can currently access and use them. While I want the player to be able to create their own custom classes by picking and choosing different skills to assign points to, the current system means that by level 10, you could feasibly have chosen only the first skill of 10 different skill sets, resulting in a character who can only do a very minimal bit of everything. I think this is detracting from committing to class trees, which means the player never gets to feel the final skills in a tree, and means you never have to think ahead when initially creating your character. So I what you to have freedom of choice about how you want to play, I just want you to consider your options and then commit to those choices for the course of your game.

So, based on these points, the skill engine will be changing. The current skills sets, including those which have not yet been added, will be referred to as 'roles'. On creating a new character, you will be presented with all of the roles, which can be filtered by class archetype (Strength, Agility, Intelligence). Here you can view what each role does and will be able to do should you choose to fully level it. You will then pick two starting roles, say Juggernaut and Duelist. Every other level, you will get a talent point to put into one of those trees. At level 5, you will unlock a third role socket, at which point you can choose a third role to add to your class. You will then receive another at level 10, then 25, then 50. That way you can still customise the class you want to play, but you must commit to learning some of those skills to begin with. Of course, should you wish to fully level only one role at a time, then you can.

At the moment, different enemy types spawn at different player levels, in a linear fashion. Rats and Squishies will spawn at player level 1, while Spyders will spawn at player level 6. This is independent of the floor that you are on, or the room type you are in. Of course, this isn't very interesting, so enemy spawning is going to be changing. The plan is to have different enemy types 'living' in different environments: rats in corridors, spyders in web infested lairs, gobblings in shanty towns, skeletons in crypts, that sort of thing. This will mean much more interesting and live environments to explore. I will talk a little more about this sort of thing in the final section.

Enemies are currently very predictable. After beating so many rats with your weapon of choice, you know exactly how said rat is going to respond to said weapon thwacking. While knowing your strengths and weaknesses is good, knowing exactly what an enemy is going to do every time is no fun. So enemies will soon have a chance of spawning with randomised 'conditions', which alter exactly how an enemy behaves. You may come across a rare Skeleton which teleports, or a Squishy which multiplies on death, or an extremely tanky rat. These mobs will be indicated as uncommon or rare, and will drop extra loot or experience on killing them.

As you may have noticed, the last few patches have featured reworks of core systems, such as terrain generation and the UI. This is because they were some of the first things I began work on over a year ago, and the code for them shows. I have learnt a lot whilst working on Claustrophobia, and looking back at some of the original programming hurts my brain. Therefore some of the largest changes that will be taking place over the next few weeks will not be something I can show you, or that you will notice in game, but rather a rewrite of the underlying game engine for performance and structure reasons. It will also correct a number of bugs that have cropped up, and make it easier for me to add to the system later on. So if patch notes seem small, but mention 'system changes', then chances are that parts of the game's framework will have been completely rewritten, which will be time consuming, but ultimately much better for the game in the long run.

So, I hope that gives you an insight into everything that's changing and going to be changing. Bare in mind that I haven't mentioned any content additions here, just feature changes. Content will be coming soon too!
Thanks for waiting patiently, and it's great to be back!

My favorite roguelike, hands down. And it's not even finished yet!

The only game that has its hooks in me like Claustrophobia is Path of Exile, although I have been recently distracted by the Card Hunter beta. I'd say you're in good company!

Randomized conditions sounds like an excellent addition. I'm looking forward to these updates.

Hope your exams went well, and I look forward to the updates.

Love the game as-is but am looking forward to summer update goodness too! :D