The month of spooks has finally ended which means it's time for me to post another development log or progress report.
I believe I made a lot of progress in the past month and I'm excited to show you what I've been working on for my game, ChronoVenture. Let's get straight into them! 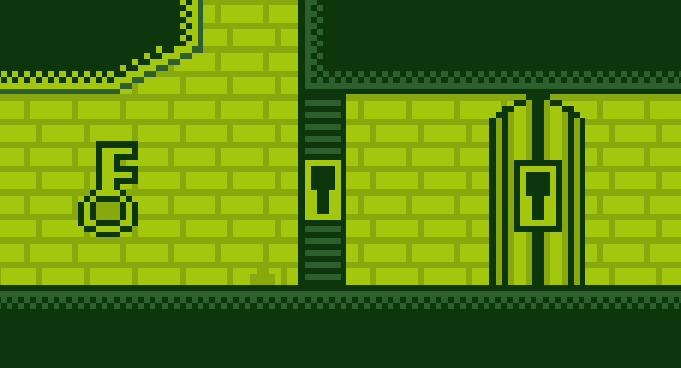 Locked gates are self-explanatory that you may have seen before in my previous devlog or my Twitter post showcasing the gauntlet feature.
They block the player's path until they defeat all the enemies. But sometimes, there will be some areas where these locked gates will require a key instead.

Keys are disposable and can be stacked if you happen to collect more of them.
These keys can be found on their own or dropped from a specific enemy. Yes, some enemies can now drop a certain item instead of a random pickup by chance.
If you carry at least one key and move towards a locked gate, a key will automatically be used to open up these gates but you won't use that key again.
I made sure these gates will immediately open while the player is running to ensure their momentum won't be stopped abruptly.

Gates are not the only things that are locked, there's also two-way doors.
Okay, that sounds redundant but I'm saying that I made a feature where each pair of doors are linked together so if the player enters Door A, they'll be taken to a different part of the level where Door B is and that door can also be used to return to where Door A is. If the player enters Door C, they'll be taken to Door D and vice versa. Some of these doors will be locked and require the same key.

Lizzy the cat sliding past these enemies above.

I've been thinking of expanding the player's moveset so I implemented a new move: Sliding!
Sliding can be used to quickly attack or dodge past enemies and to maneuver across short areas that can't be accessed by walking.
Sliding across short areas will retain the player's momentum to ensure they won't get stuck and if the player manages to hit an enemy while sliding, they'll receive a quick boost to their momentum. The slide attack is not powerful however and bosses can still damage you regardless so don't use it against them.

This move was originally going to be an unlockable ability but seeing how people really liked my Tweet showing that new ability (became my most liked Tweet so far), I figured that it's best for the slide attack to become part of the moveset by default. 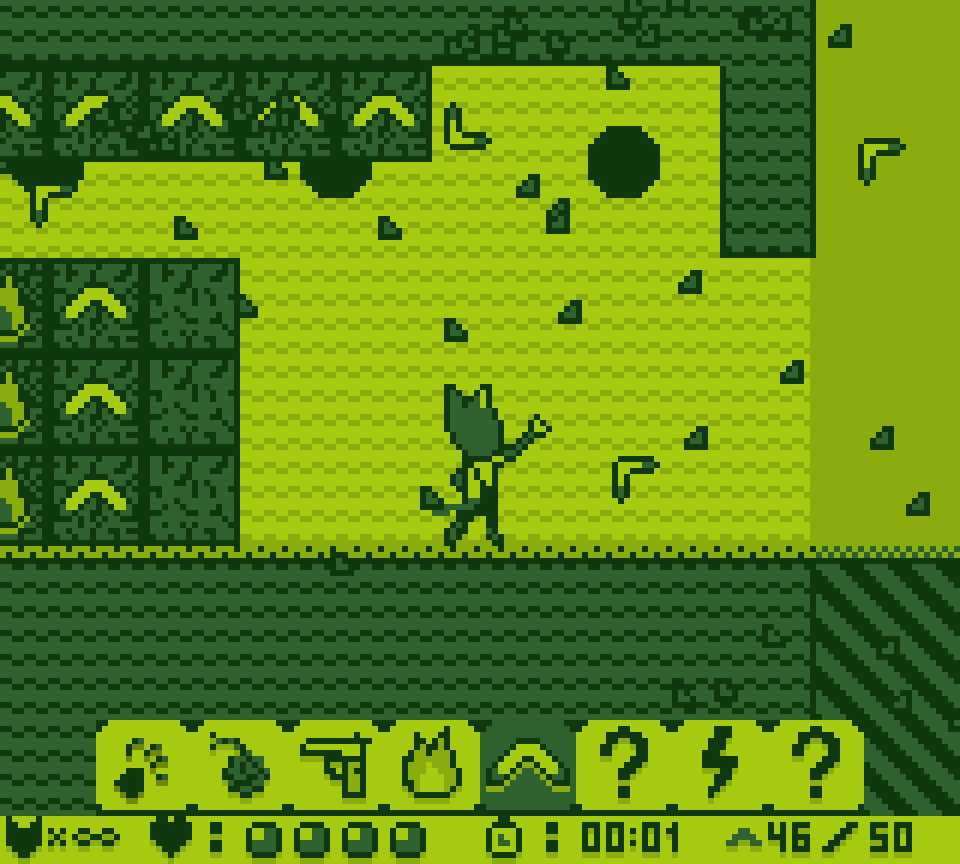 Boomerangs are thrown in a 180° curve.
If there's a row of enemies above, it can make for some satisfying kills.

I've been working on the fifth weapon and I'm still working on it. It's the boomerangs!
Boomerang is quite a powerful weapon as it can penetrate through enemies, crates and breakable blocks as they won't break on impact.

I still need to figure out on making the weapon practical to use in front of the player as I need to account for the player's momentum. If the player is running fast, I need to make the rangs fast also but the increased speed will affect their trajectory which is something I need to get sorted out.
I still have yet to make the weapon able to be thrown diagonally, upwards or downwards like the second weapon, Yarnbomb.

I also had thoughts on making the boomerangs as homing projectiles but I think I'll save that concept for a different weapon.

Sliding underneath these pests is advised to dodge them.

If you've played my game, you would at least know about the typical ant troops you see that just walks around aimlessly on a platform. Very simple enemy. Then you have the little "Swoopy" birds that hops towards you when it's awake. Soon later, you'll find Dropbears hanging onto trees or hiding inside hallows that will drop down on its prey and simply run carelessly forever afterwards. And then you have big "Swooper" birds that swoops towards where you are when they spotted you.

For the next update, there's gonna be seven more enemies and most of them will have AI that are less simplistic as they'll behave differently depending on whether they see the player.

Take the small Leapants (as seen on the picture above) for example.
They move slowly and idle randomly before moving again or changing directions, making them unpredictable pests until they see a player where they'll move faster and even make a leap towards the player. They'll keep running in an aggressive state but if they don't see the player for a couple seconds, they'll return to their slow and calmful state. Due to their random and inconsistent behaviour, I might have some of them sleep initially until the player wakes them up similar to Swoopies.
If you're facing them, sliding past these leaping ants is advised but they're weak to pretty much anything so just claw, shoot or blow them up before they leap at you. They're also small enough to crawl under short areas you can slide through.

Next enemy on the list is Stingers and they're essentially just a quicker and tougher variant of an existing bird enemy, the Swoopers. They buzz around horizontally in an area and once they see the player, they'll charge up to sting them.

I'm thinking of having Stingers replace Swoopers on the Second Act of the first playable stage, Dryforest Drought, if the player fails to complete the objective in the First Act similar to how Firents won't appear in Good Future of Act 2. Come to think of it, I might have Leapants replace Swoopies in Bad Future of Act 2 as well. 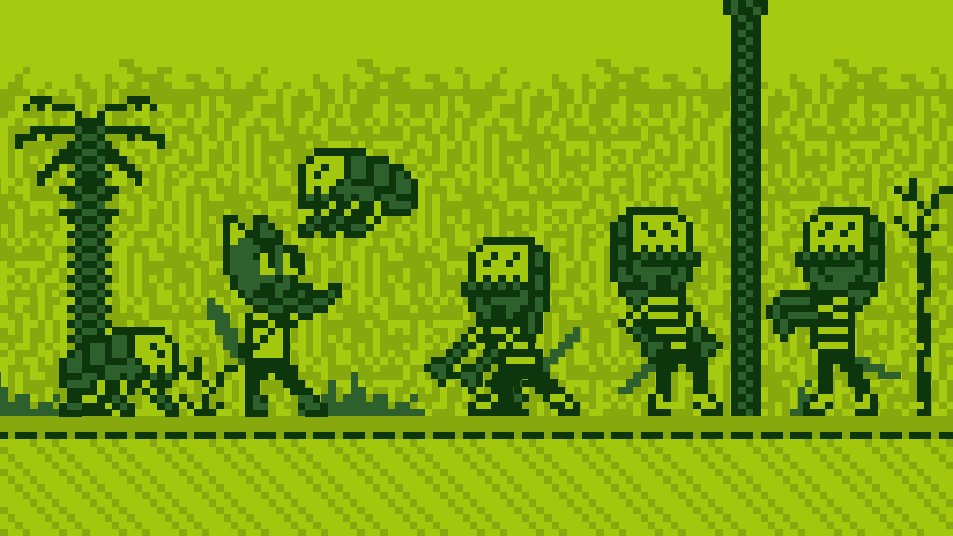 Don't let one of these parasites get a hold of you.
Don't get turned into one of them.

The insectoids' army intends on getting more troops to do their bidding or just to stop you in particular. Even if they're not insects but rather mind-controlled mammals.
That's where the Mindfleas come in as seen on the image above on the left.

Mindfleas behave like tougher Leapants and will certainly leap at your face except they'll attempt to take control of your head. Unlike most enemies where Lizzy will simply receive knockback when damaged, getting caught by a Mindflea will initiate an unique animation that abruptly stops the player's movement. As long as Lizzy has health, she'll be able to throw the Mindflea off her. If she doesn't, she'll become one of the Huskats as seen on the right of the image.
(Is husk even the right word? I just don't want to call them "zombie cats", that's boring.)

Huskat is the result when a Mindflea successfully takes control of a poor feline.
They're not too threatening however, they move slowly and will attempt to slash at the player when close enough but you can stun them right before they attack.
They're not as dumb as Bullants or Firents though, they will turn their back if you damage them from behind. Speaking of which, some of the new enemies will also turn around when they get attacked on their backs.
Be careful when eliminating a Huskat with non-explosives, there's a chance where the Mindflea will eject itself off its host to get you. 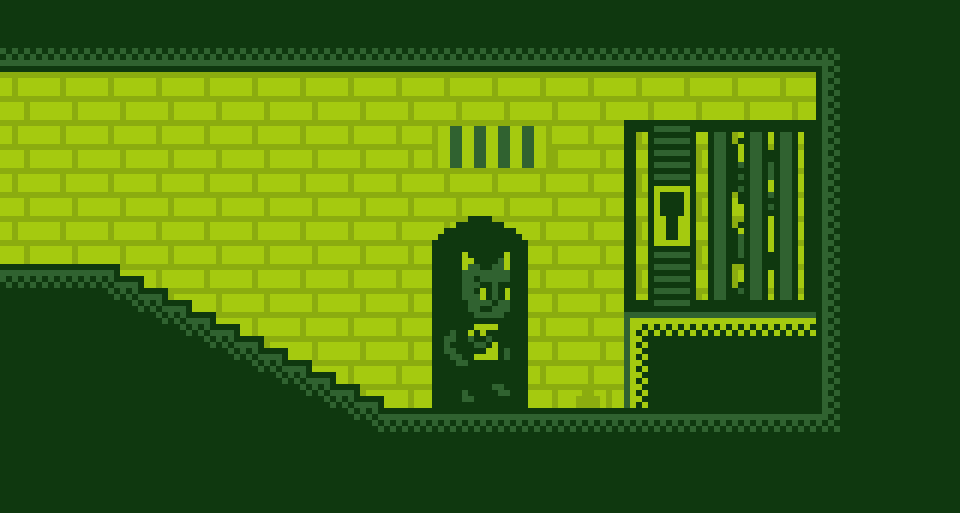 Okay, I didn't realise that discussing about over five new things will make this devlog almost as long as the previous one which was because of the demo's postmortem.
But hey, at least I actually talked more about upcoming content of this game than evaluating how well did the demo go this time around. I was planning on talking about the game's unexplained premise on this log but I decided to save that for another time.

Like I said before, I made a lot of progress in the past month and if I keep going at this rate, I might be able to release another demo before Christmas.
No promises but I hope I can get another demo done by the end of this year.
Thank you for reading my October 2020 development log or progress report of ChronoVenture and I hope you have a wonderful day.