Merry Christmas and a happy new year to all you out there! For this Christmas we figured we would give you something special; an in-depth look at our artillery for version 2.0.

Artillery was the main cause of battlefield injuries and deaths during The First World War. In fact over half of the battlefield injuries on the frontlines happened because of shellfire, whether it was a stray round or a massive barrage before a large attack. Both the Germans and the British were known for using artillery to weaken up defenses in the enemy lines before a large-scale attack occurred; sometimes several million rounds of artillery-fire were fired in hope of softening up the enemy, with mixed results. Artillery was truly the weapon that the soldiers in the trenches feared the most, seeing as it could hit you at any given time without any warning.

As the war went on, scientists and arms-manufacturers looked at other ways in order to make artillery even more deadly. Experiences from the front in 1915 had shown that gas attacks were largely effective against massed enemy troops, but there were issues when it came to actually deploying the gas. Wind-direction would often cause the gas to drift in the wrong directions, and gas could very often be seen by the enemy before it hit them, making it easier for them to prepare for what was about to come. The solution to this “problem” was to pack gas inside artillery-shells. Gas could now hit the enemy right in their trenches without any warning, and the weapon got a whole lot deadlier.

Seeing as both artillery and artillery gas-attacks were very dangerous, feared and powerful weapons in the First World War, we want to portray them that way in WW1: Source too. This is how we have changed the actual artillery-mechanic from 1.13b.

Previously the officer had the opportunity to send 3 artillery strikes in a life, and whether he chose normal artillery or gas was his own choice. This mechanic made the artillery more of an annoyance than a fearful weapon seeing as it struck so often. To change this up in 2.0 we have reworked the system. The officer is still the one in charge of sending artillery-strikes with his trusty binoculars
or telescope, depending on what team you’re on. 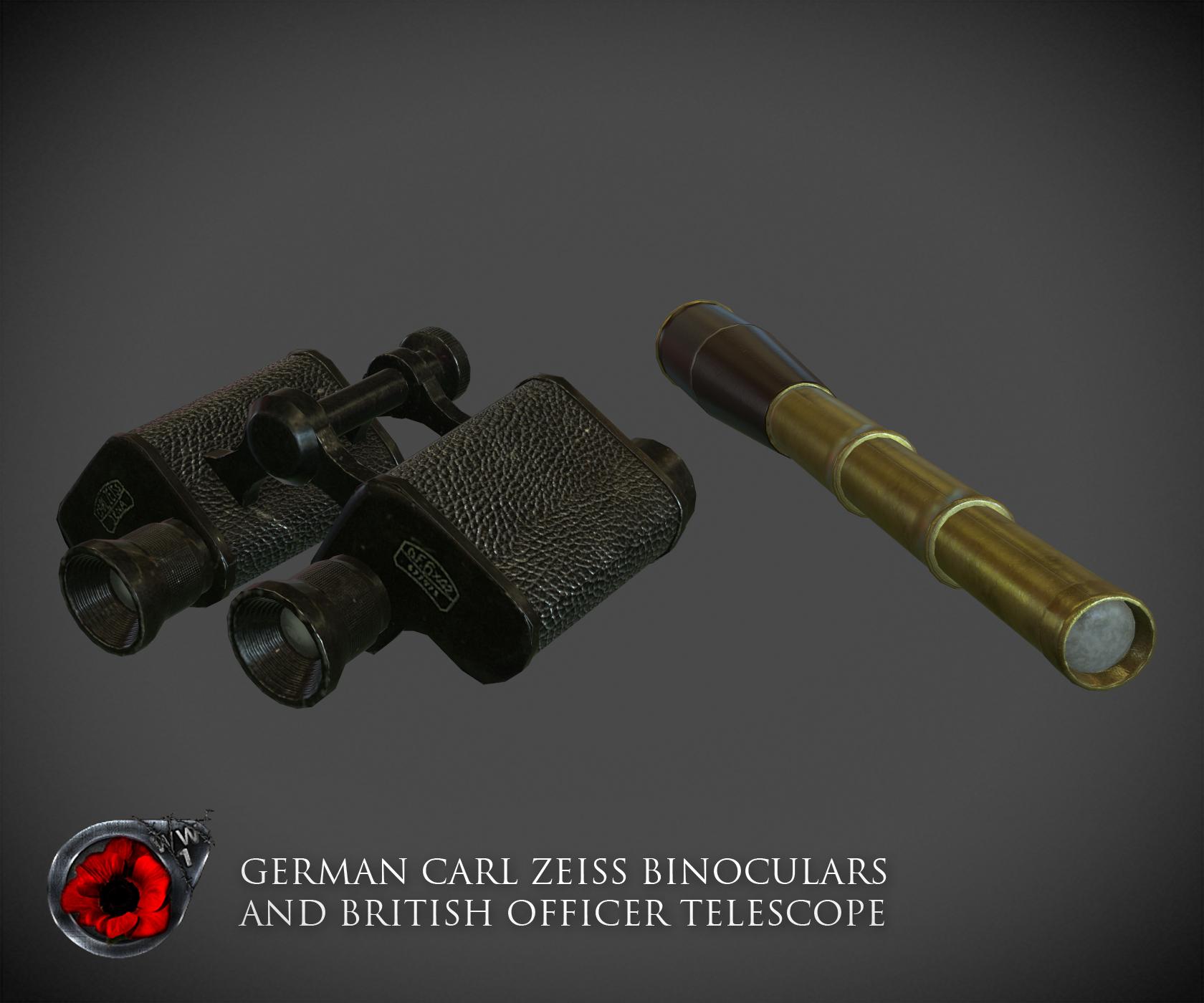 Each team now has an “artillery-timer” (which can be changed via a console command) of a default of 5 minutes (meaning there is a cooldown of 5 minutes between each barrage). This means each team can send one barrage every 5 minutes, and you can still choose between normal artillery and gas. An artillery-strike is now marked with a small flare on the ground, giving both the sending team and “receiving” team an indication of where a strike will hit. The Germans have a red flare, while the British have a blue flare. As the flare dies down, you will hear the actual guns roar in the background, and then the barrage hits with large force. The barrage is mightier than it was in 1.13b. It is more concentrated, has a larger explosive force and with the addition of our ballistics, shrapnel now gets sent flying all over the map. Our particle effects makes the artillery an awesome but scary sight, they were produced by the kind contributor Valdis “Vman” Matas. 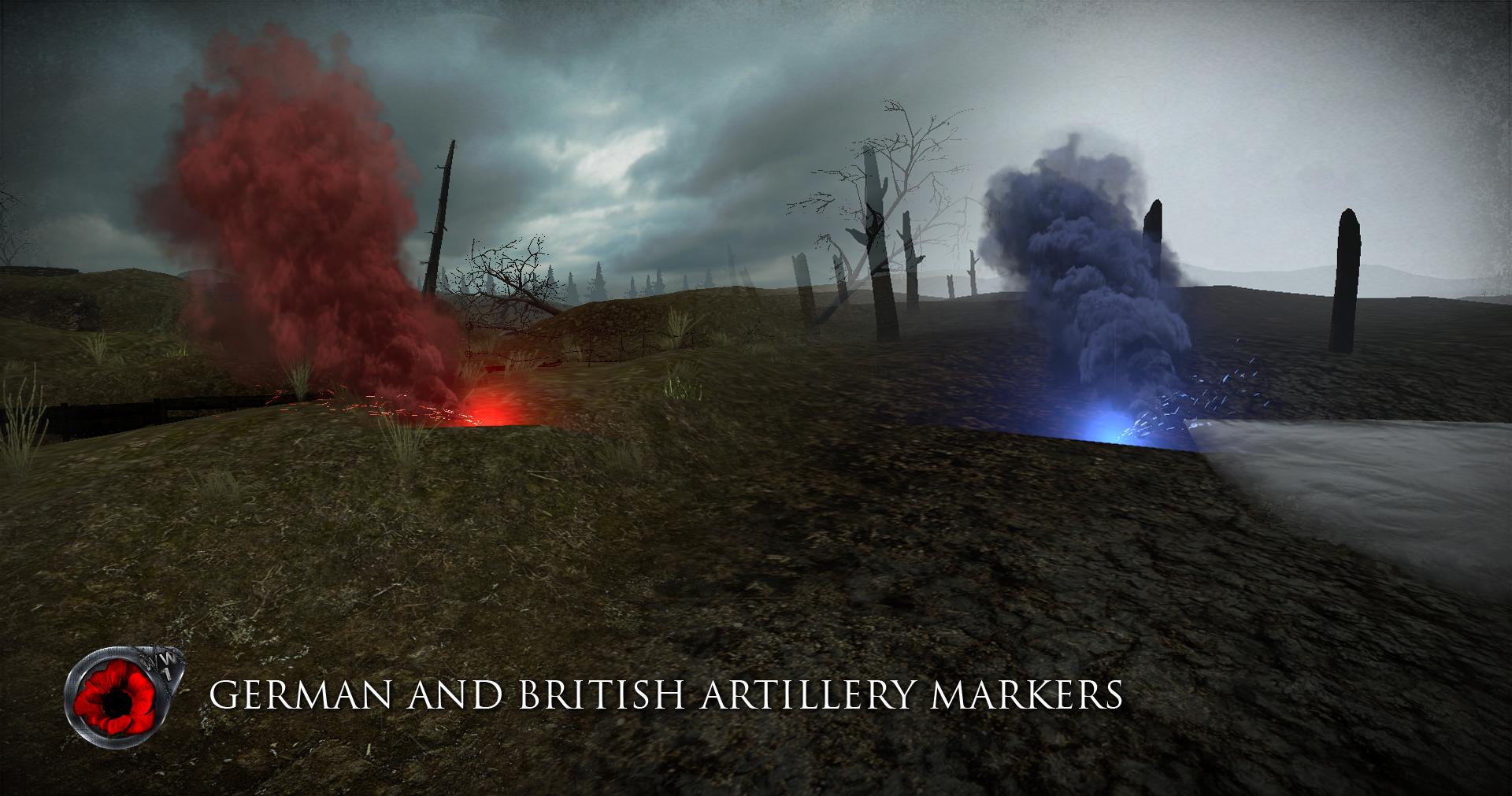 Gas attacks are now more dangerous, as it takes longer for you to get your mask on, and the hit detection for the actual gas has been improved from 1.13b. Fighting with your mask on is not something you want to do at all; it might actually be wiser to retreat. This makes artillery not only an offensive weapon, but also a defensive one. A team can block off an area for the map to prevent the enemy team from reaching it with full effect.

We mentioned ballistics, this changes our artillery drastically. The artillery is now a much more powerful weapon with much more reach, but seeing as it’s such a situational, powerful and random weapon (when it comes to the shrapnel) it should be used sparingly. Artillery and gas have their own unique shrapnel-trajectories too; normal artillery has a much more level trajectory, and the shrapnel reaches further. Gas however has a more vertical trajectory and a shorter one, making it harder to cut down infantry with it. You might find yourself unlucky, so it’s often better to take cover than to watch the strike happen. (The red lines show where the shrapnel is going in the following pictures) 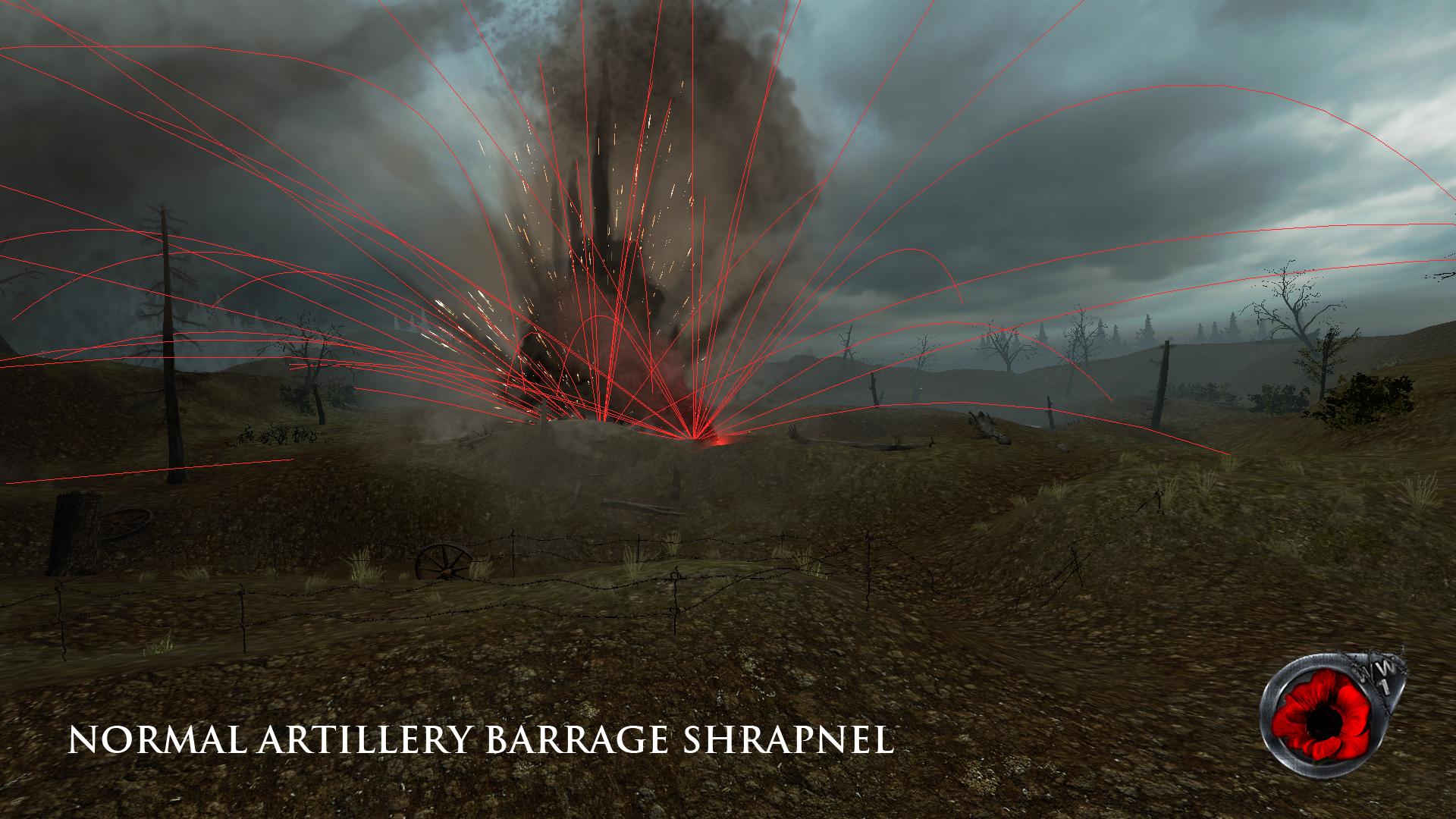 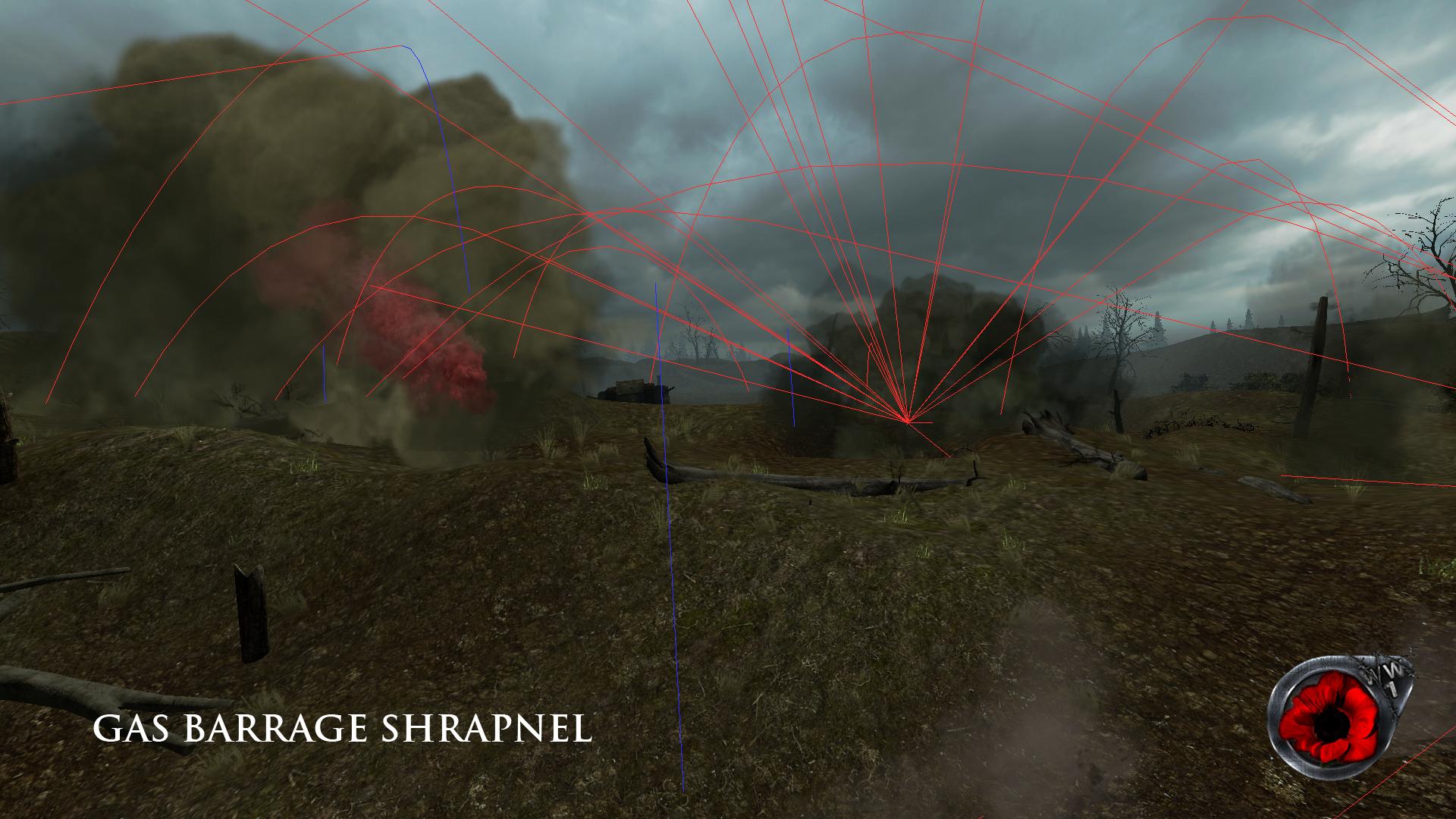 Thank you for reading through this, and we hope you found it interesting! Until next time, take care, have a nice Christmas and a happy new year!

Merry Chrismas team, nice news!
I'm a bit confused about some shrapnel trajectories being so parabolic that with their falling spot just near the explosion shows their low velocity. Can the shrapnel of a real shell explosion be that slow?

Hey, while it might not be realistic at first glance, the idea behind it is that it is not only shrapnel that gets sent flying, but also debris from the ground. This is the case with the gas-shells when they hit the ground seeing as they're not packed with normal high-explosives, so the explosion isnt as powerful. Besides, it makes the normal artillery-barrage and the gas-barrage a bit different, which is a design-choice that we made

Sounds reasonable but will theses sort of trajectories will influence the game in any way? From the pictures provided it looks like maybe 3,4 max 5 fragments of shrapnel would be flying low enough to hit anyone in close-medium range (which was the most dangerous area to be in, when considering artillery). I think the parabolic trajectories are great but the ratio between straight flying and decelerating fragments should be tweaked. Just my 2 cents. Loving the particle effects on those shells. Nice work!

Great work, keep it up. You've done a fantastic job thus far with the mod, should be very proud of yourselves.

You should look up Verdun then. :)

"takes longer for you to get your mask on"

And takes you longer for you to get your mask off.

This year would have been a great Release year for this mod, because WWI was 100 years ago.

But either way, great work, and take your time for a release :-)

I'm not a fan of enemies seeing the artillery flare. That will make it too easy for them to avoid it. I also think artillery should be more often and impact a wider area. This would make the game more atmospheric, in my opinion.

Cool update. I can't wait for the mod!

And artillery flare for calling artillery is not realistic.Here how it is, guy who call artillery he send to artillery people coordinates where to shoot (through the radio,phone or whichever system they got).

It's not realistic, but it's there for gameplay reasons. In 1.13b noone, not even the officer was warned of where the strike would actually hit which often lead to confusion. Having a marker solves this.

What is next step to stop confusion mark every projectile that has been fired its WW 1 game/mode it should have "confusion",(If officer going to troll just put friendly fire limit).

wow, those barage explotions look simply amazing!!
explotions in Hl2 itself do look kind of silly, not realistic at
all when you ask me, but this is fantastisc. Same counts for those
gas attacks, very nicely done!!

Those binoculars look much better :P